For their works, the architects Takaharu and his wife Yui have received different awards. In this case, the project won the 2017 Moriyama RAIC International Prize from the Royal Architectural Institute of Canada for being “transformative in its social context”, however, the architect says that the biggest prize was the initial reaction of children upon entering for the first time in space. Tezuka describes that moment as a “love at first sight” that was beyond their expectations and hopes that this design with ample spaces, without limits or restrictions, creates a future in which the natural instinct of children is to play in nature , without gadgets.

Completed in 2007, Fuji Kindergarten is located on the outskirts of Tokyo, Japan, in the town of Tachikawa, a residential area near other educational facilities, on a large avenue. In the place where the new building was built there was an old kindergarten that was torn down, leaving some of the existing buildings in the corners.

It is a building with only one floor that, when breaking the barriers that are usually found in the typical educational architecture of childhood, encourages children to play and interact.

The scheme to be generated with this project is to begin the “end of an era” in which modern comforts have deprived children of basic sensations such as interaction with nature and the constant game. We want to generate a “common sense” that encompasses those values ​​of society that do not change, even throughout the ages. The goal is that children, in these facilities, become people who do not exclude anyone or anything.

Nature plays an important role in child development: access to nature has proven beneficial for academic performance and has a positive impact on mental health and cognitive abilities. True to the essence of Japanese architecture that seeks to harmonize spaces with nature, Tezuka Architects set out to integrate pre-existing trees into its design: three 25-meter zelkova trees are integrated as part of the building, growing from the ground to the ceiling giving the feeling that children play in a “tree house”, contemporary and large-scale.

Fuji Kindergarten is a single-floor oval-shaped project with a large interior courtyard in the same way. The main entrance to the gardens, from the great avenue, is located to the north, there are two other secondary entrances to the south.

Once through the garden there are four accesses to the building that join the interior of the oval with the rest of the premises of the kindergarten. These accesses coincide with the cardinal points, north, south, east and west.

These four entrances divide the interior of the building into four large areas. Within each room there are no formal divisions between each class, the spaces are in sight of each other. Depending on the size of each room can fit 2, 3, 4, 5 or 6 classes. There is also a staff room and four bathrooms, two to the east and two to the west.

The separation of the different classrooms is through some movable open blocks of Paulownia wood. It is a type of soft and light wood that children can carry and if they hit it, it is the block that is dented.

For each room created there is a glass skylight that opens and which could be accessed with a ladder to climb directly to the ceiling.

The eastern part of the oval, which is generally divided into five spaces, is wider than the other sections. Therefore, if the furniture is moved, a space that would accommodate up to 600 people can be generated, thus becoming the central hall.

The roof is an important aspect of the project because it is accessible and a place where children have the freedom to run. All architectural spaces were designed to be at the scale of its small users.

The accessible roof becomes the main play space in the school, giving children an endless path to run, jump and play. It does not present any type of structure that interferes with its route, it is about being as free as possible. Only skylights and trees that cross the building are found. It has a slight inclination towards the interior of the patio creating a height of 2.10 meters to allow an adult to reach to touch the hanging feet from above. Surrounding the ceiling is a thin railing with a maximum space of 110 mm, allowing the passage of the legs, but not of the heads. To climb there is a metal ladder and down there is a slide of angle and length pleasant for children of all ages.

The building is surrounded by full-height sliding glass panels, they are the only elements that separate the interior from the exterior, providing access to the outdoor views. Continuing with the oval shape, they promote independence and socialization. The basic configuration is that these windows are always open to the garden when the weather permits, this situation is achieved at least two thirds of the year.

The interior and exterior spaces are constantly interacting through these sliding doors, which optically break the physical barriers found in traditional school structures.

Three pre-existing Zelkova trees cross the building being high climbing points for children. Holes have been cut in the roof so that the trees are projected and networks have been laid, with squares of 60 mm, around each tree so that the children can dive into the net and climb quietly.

There are no distinctions or segregations between people who work in the garden, nor between places. The area designated as the directors office is next to the entrance hall, but it is simply a corner. The objective is that there are no enclosed spaces because what happens in them is unknown to both students and teachers. In this building all spaces are visible to all occupants.

The structure of the building consists of an iron grid arranged so that existing trees could be accommodated and preserved. There is no regularity in the oval shape, it is a building without a center.

The roof is a three-dimensional curved surface with a hyperbolic shell that changes delicately, creating a large space for running. There are no bearing walls, but white-painted steel tubular columns are found at the intersections of the roof grid that is supported by two large perimeter rings.

As for the ground, an underlying layer was installed before leveling the concrete to avoid the areas around the roots. The base of the trees was taken into account and within a radius of 2 m no concrete floor or radiant slab is constructed.

Final welds were not made until after the roof was completed to ensure that the structural moment was safely completed.

Natural materials predominate in the project to create a warm atmosphere in the spaces and for children to be in contact with soft textures both indoors and outdoors. These materials can be observed in the light wood floors of the classrooms, in the dividing blocks or on the terrace deck made with cherry wood slats.

Under the 2cm cherry wood slats used on the terrace, a layer of rubber was placed on steel lifting slats. Under the rubber layer, a 5cm concrete layer, 5cm thermal insulation layer was placed, 2cm was left for mechanical services, followed by 1.5 cm of plasterboard and 0.9 cm of acoustic ceiling, perforated also of plasterboard.

The ceiling and columns are painted white and the sales rails are made of aluminum. 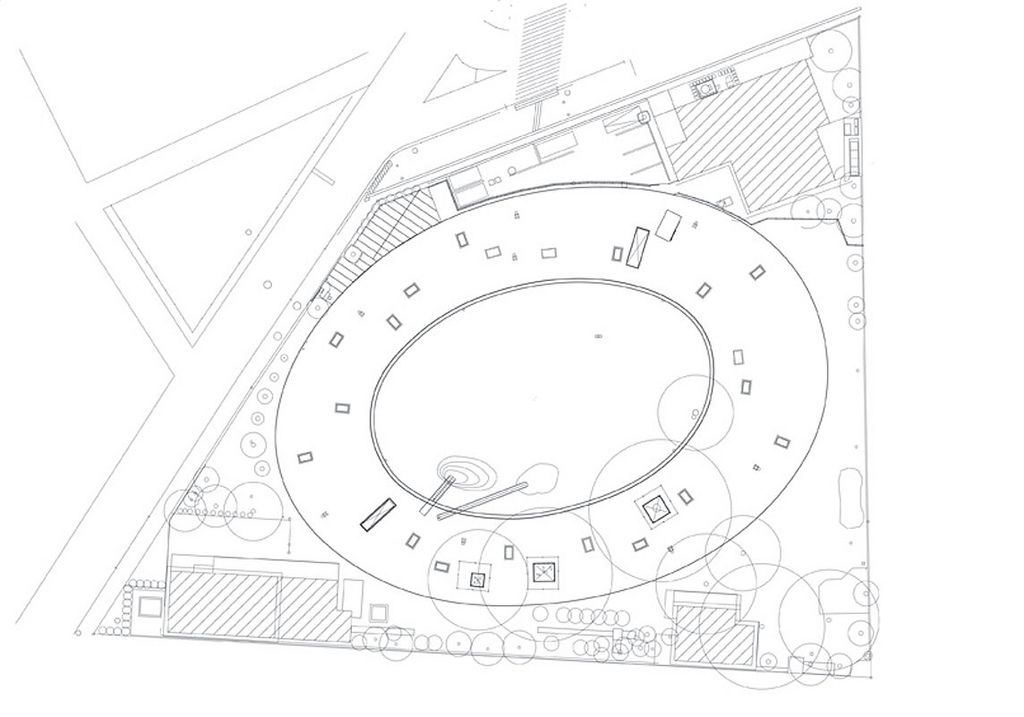 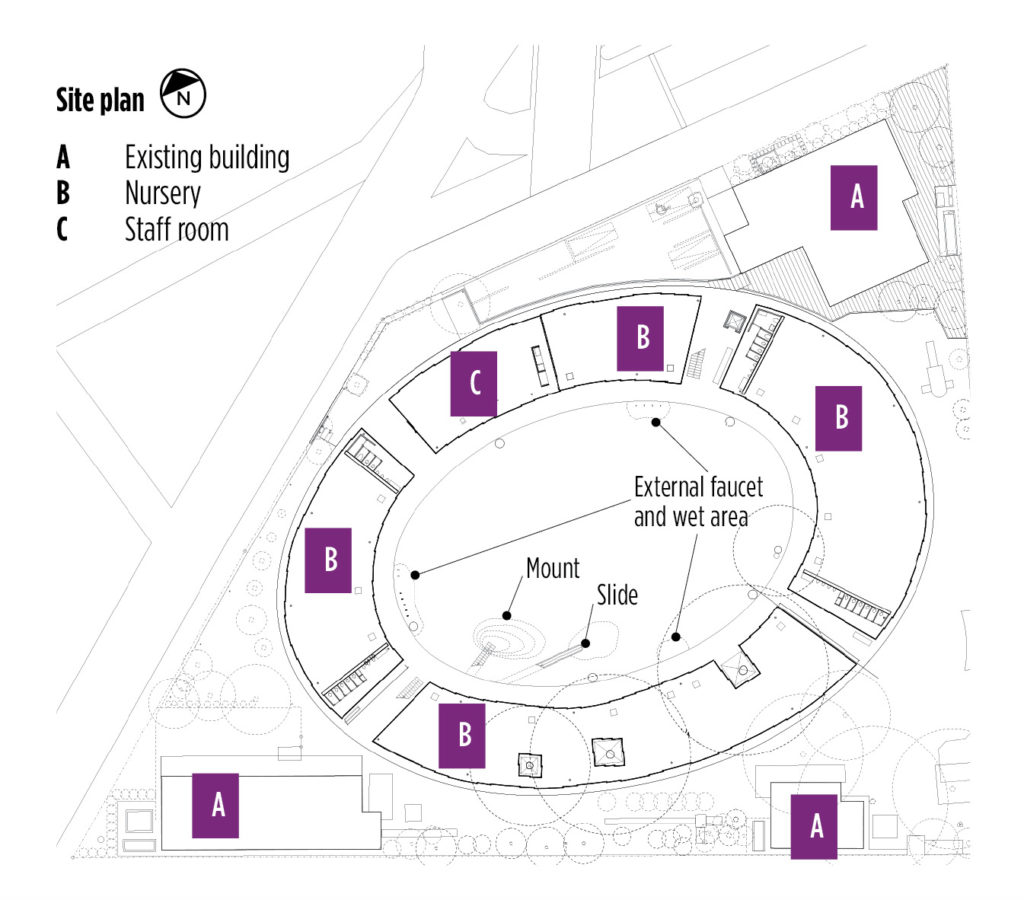 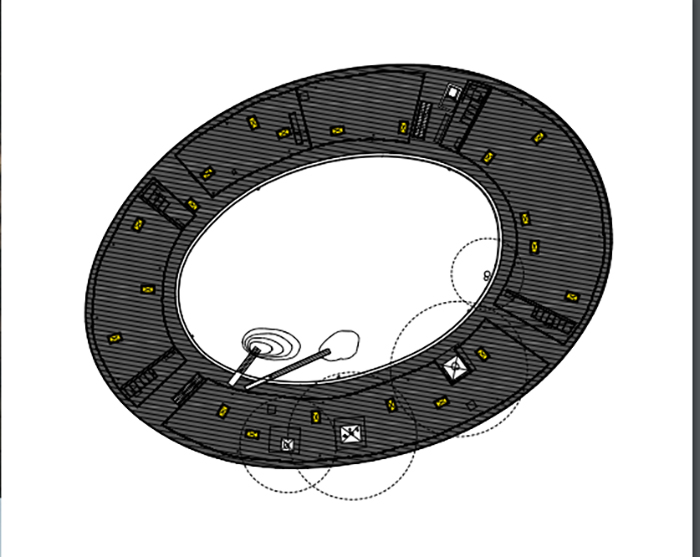 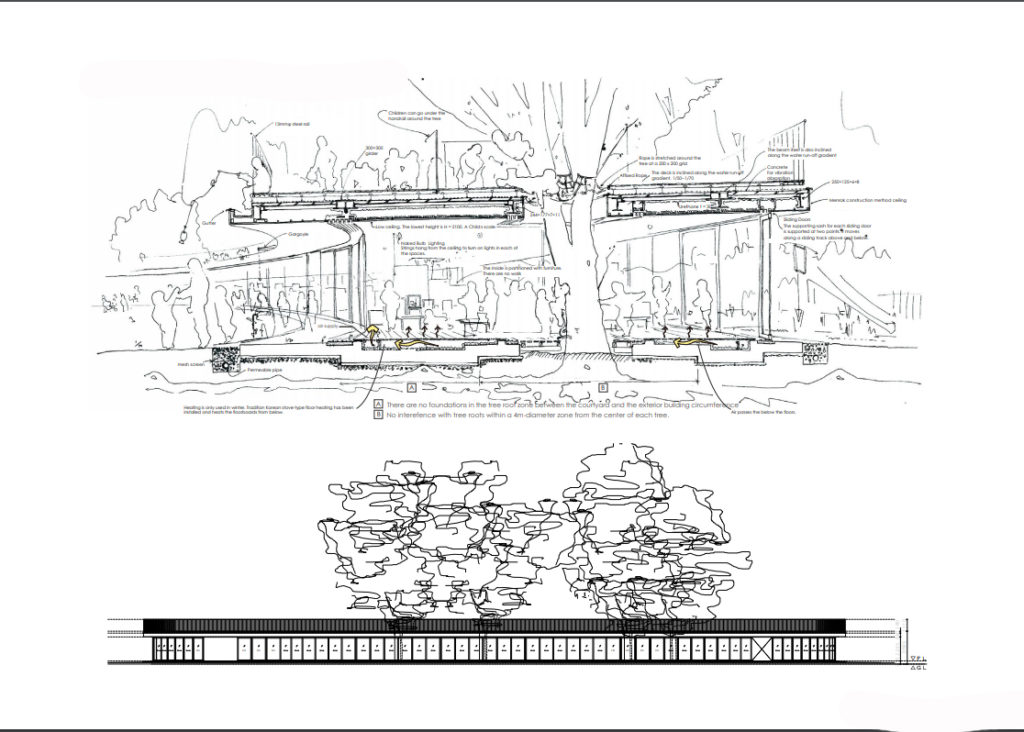 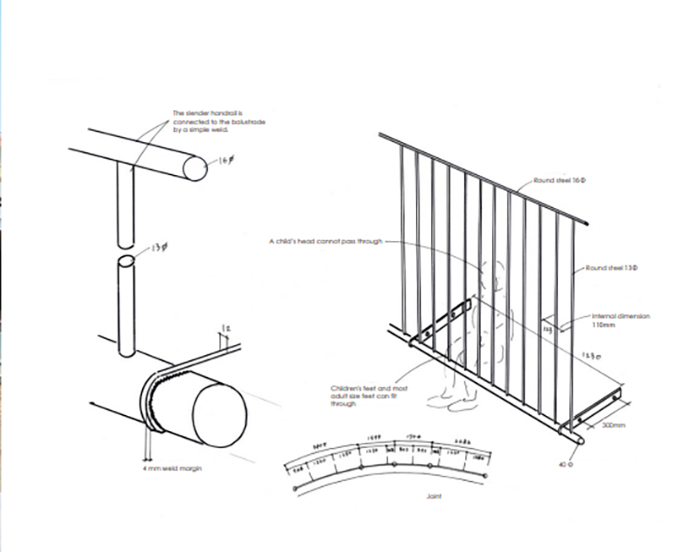 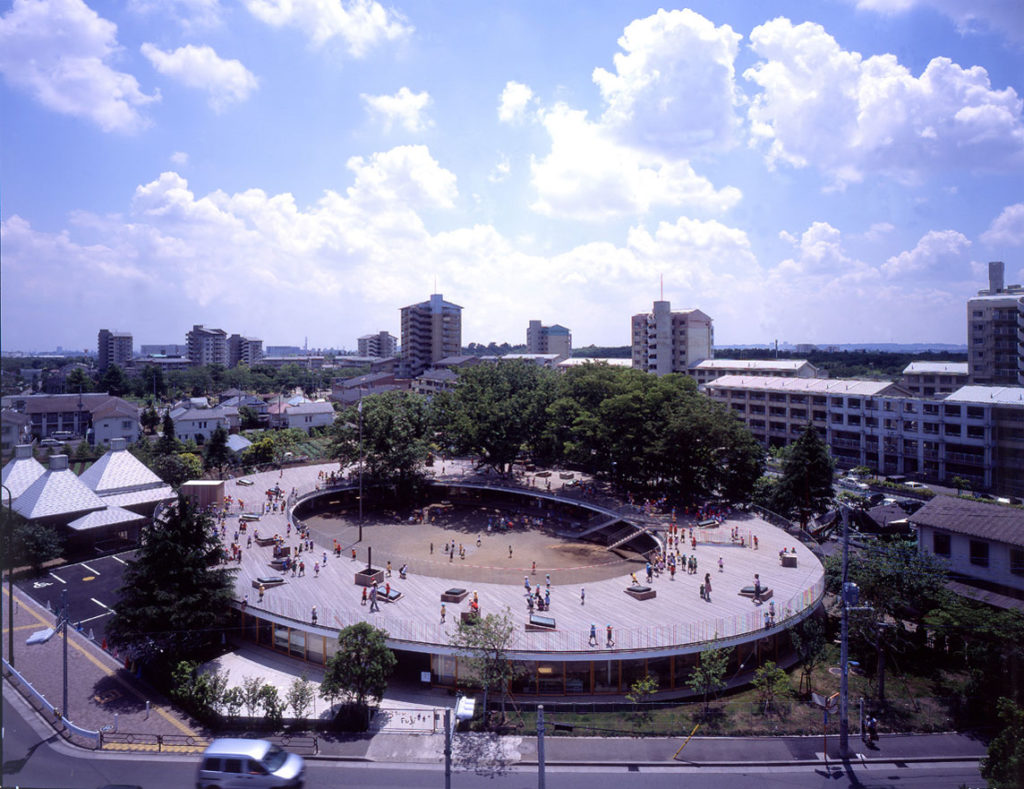 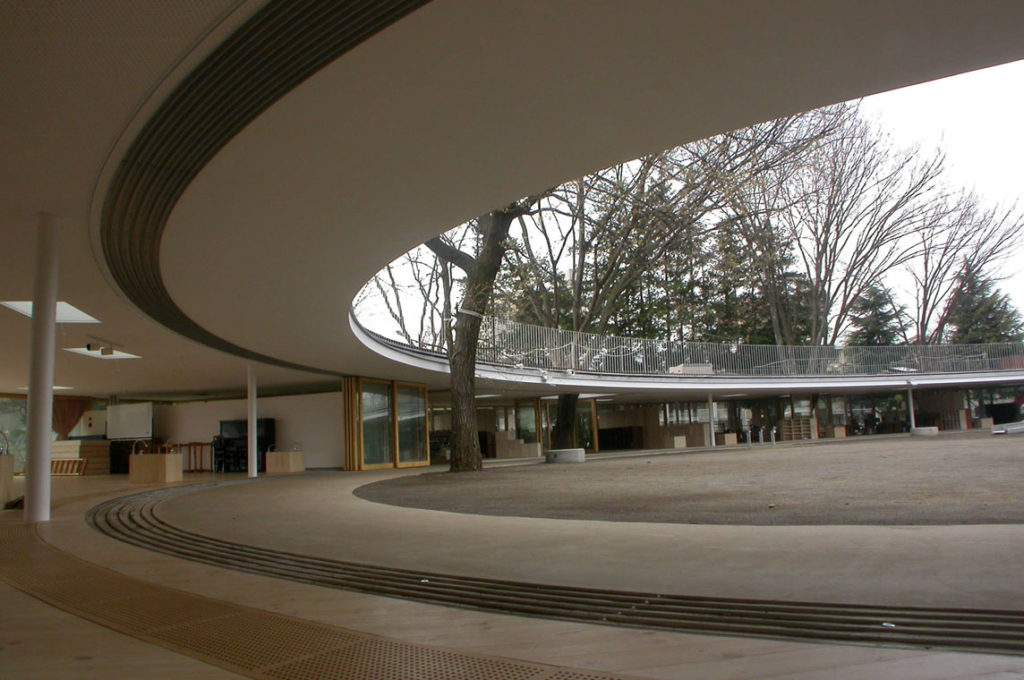 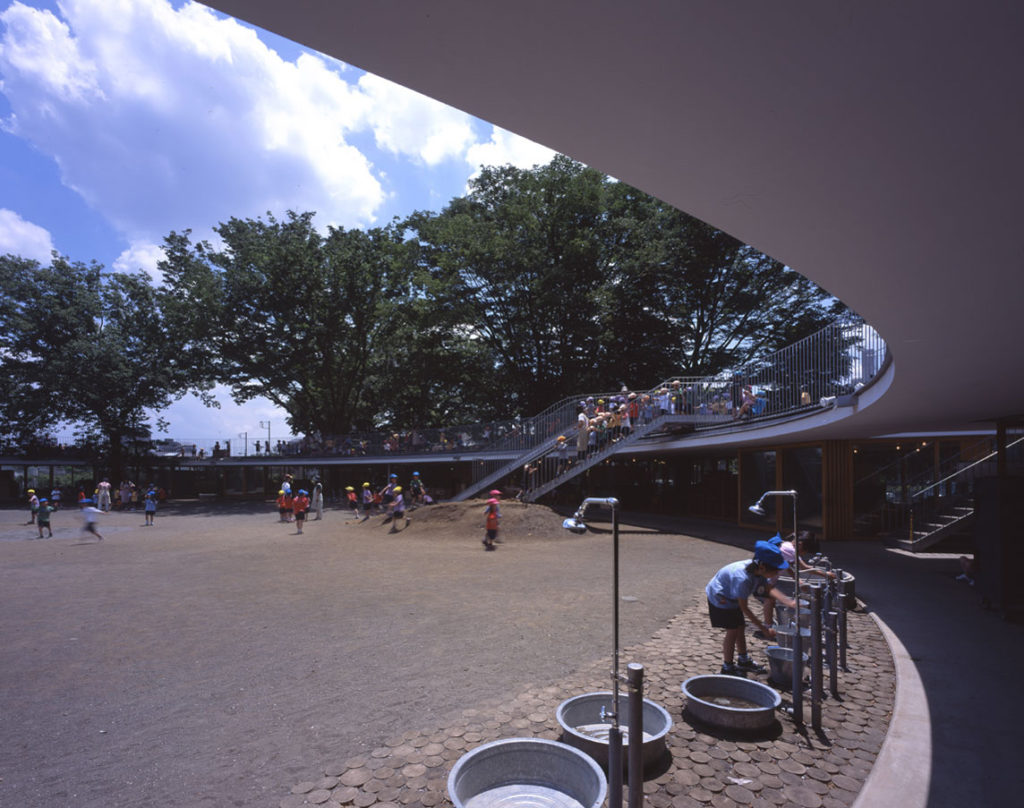 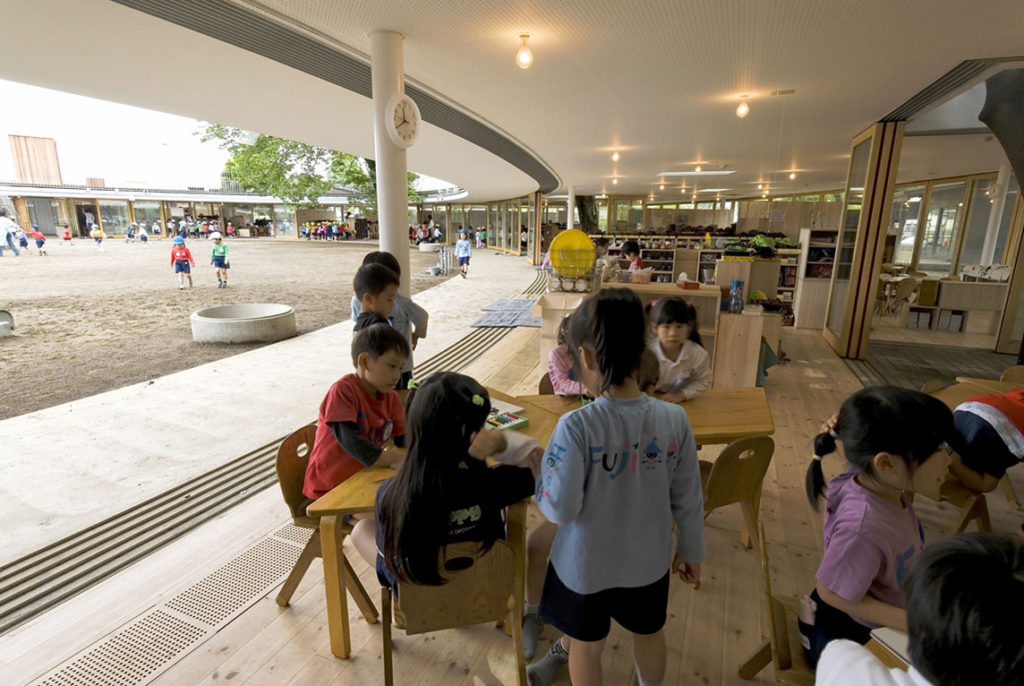 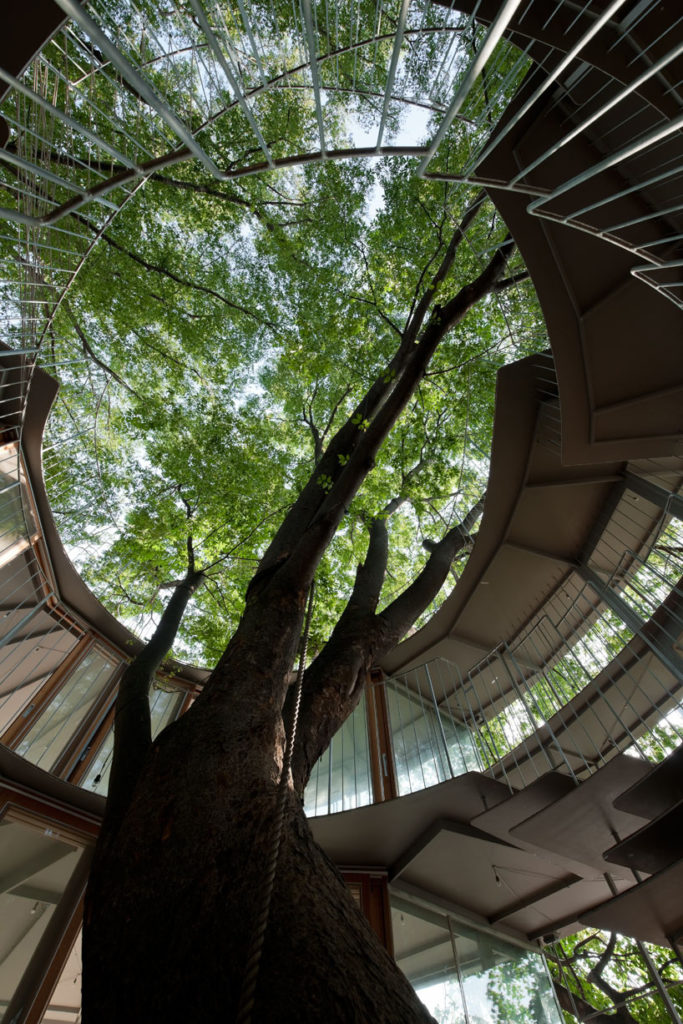 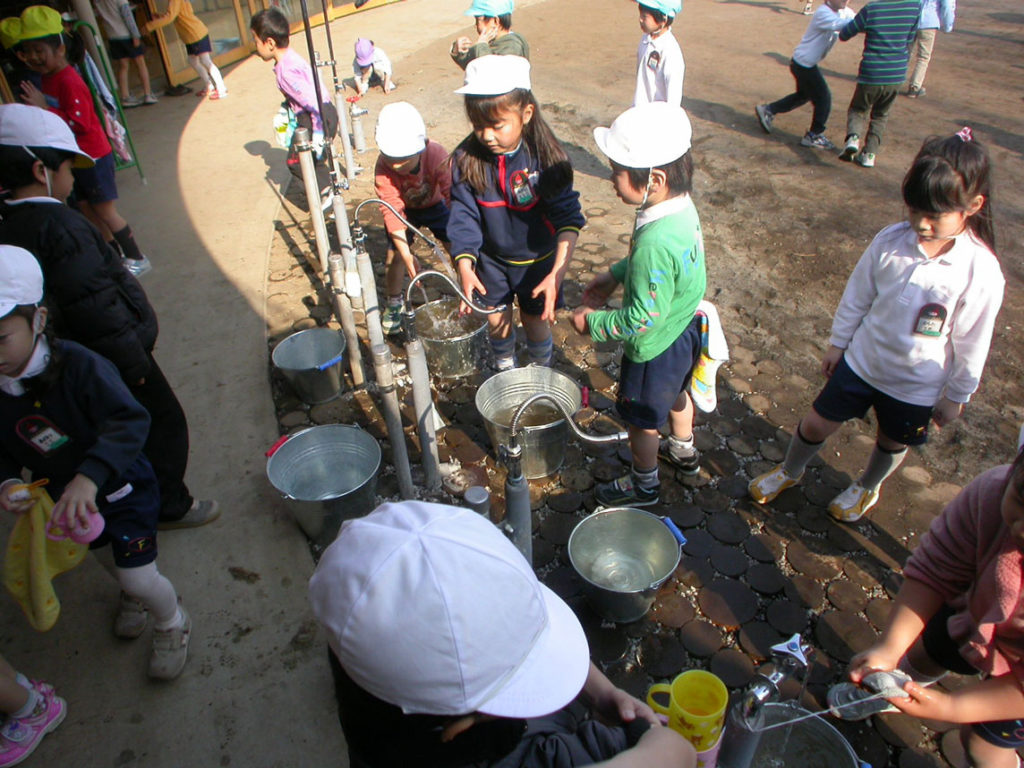 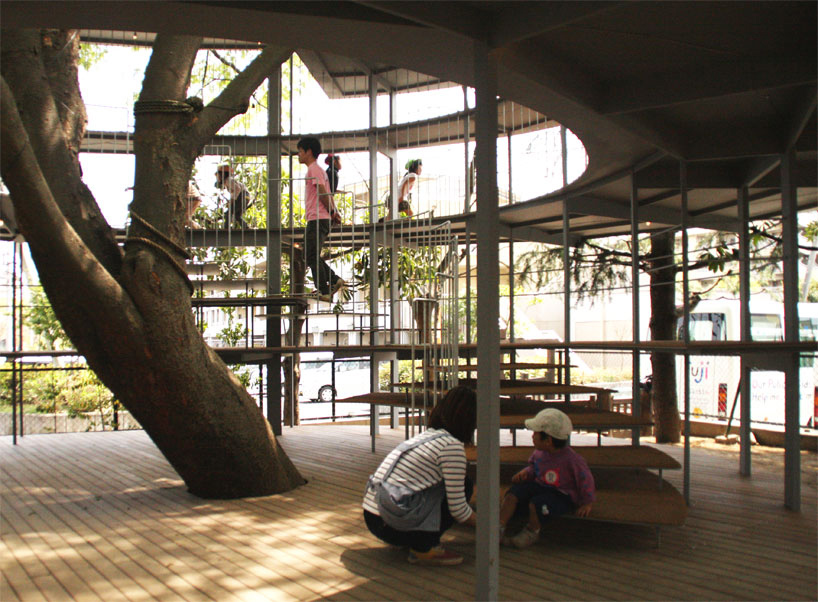 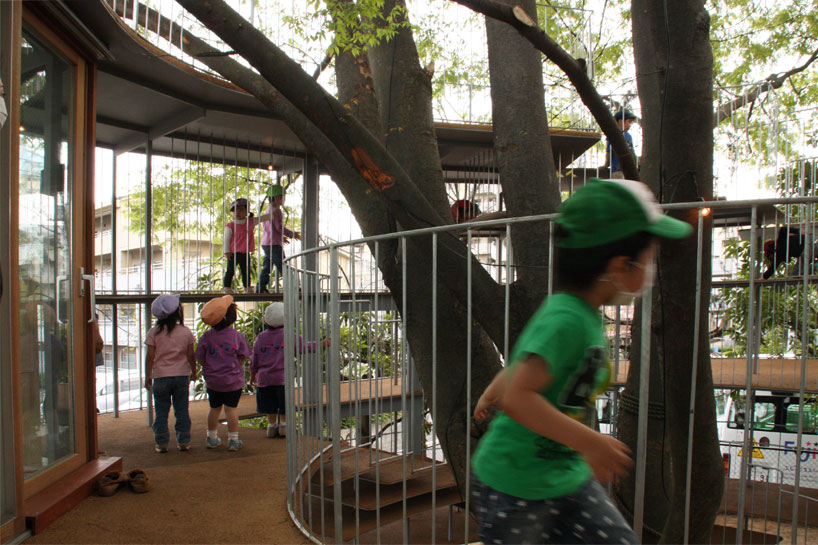 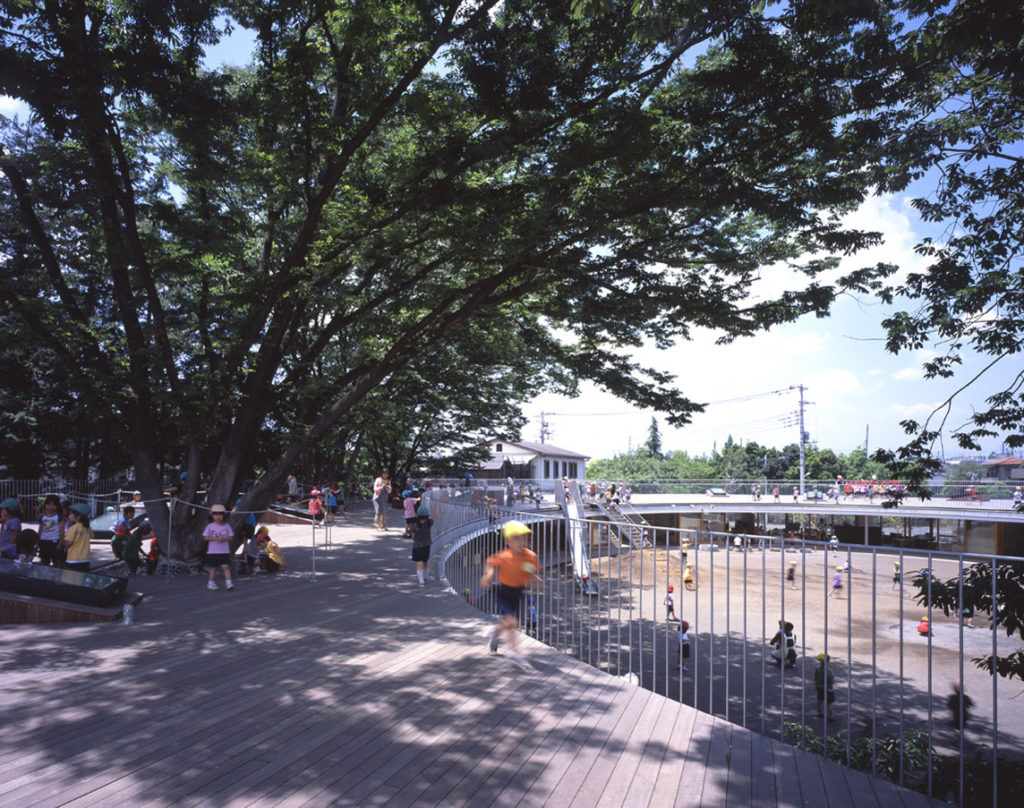 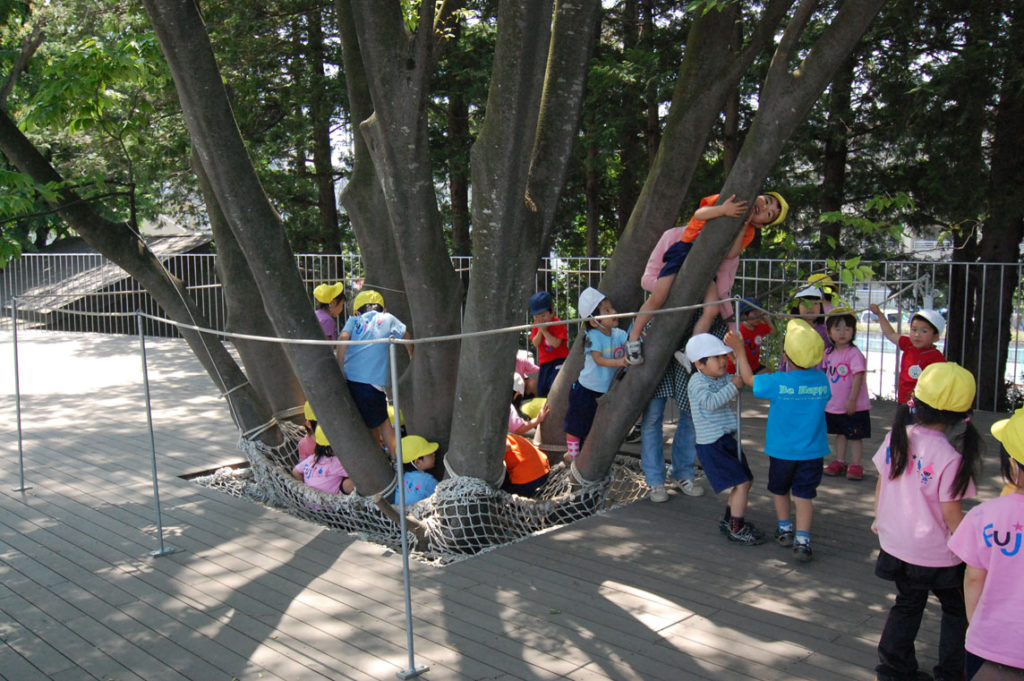 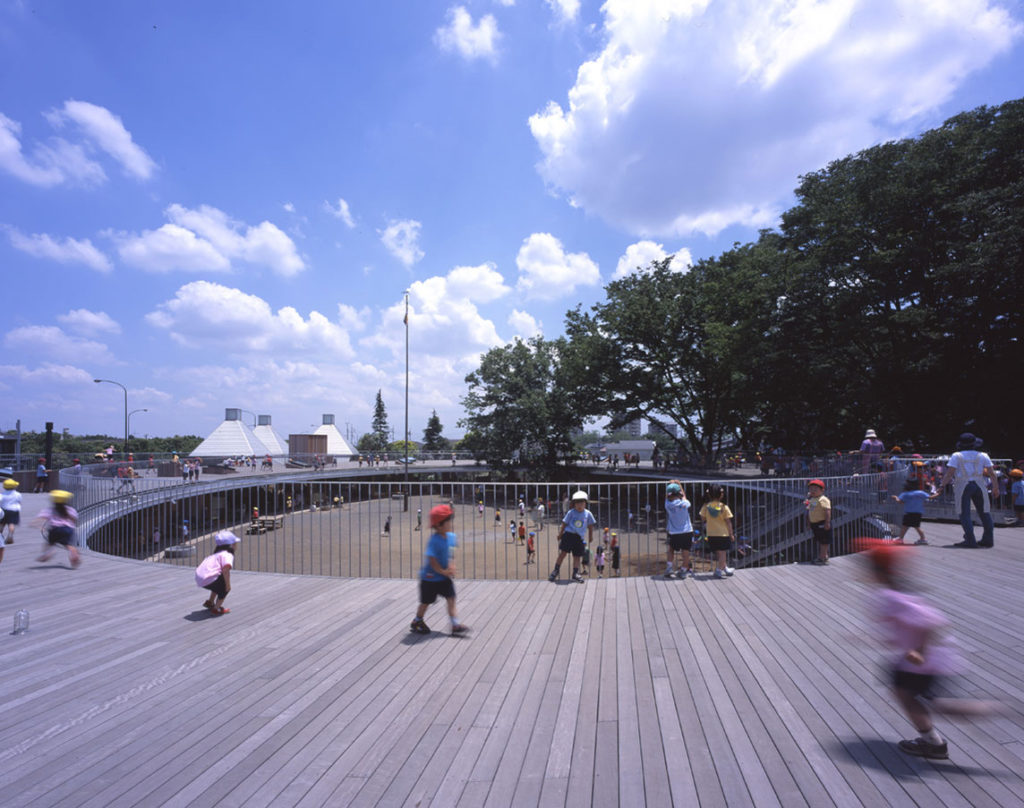 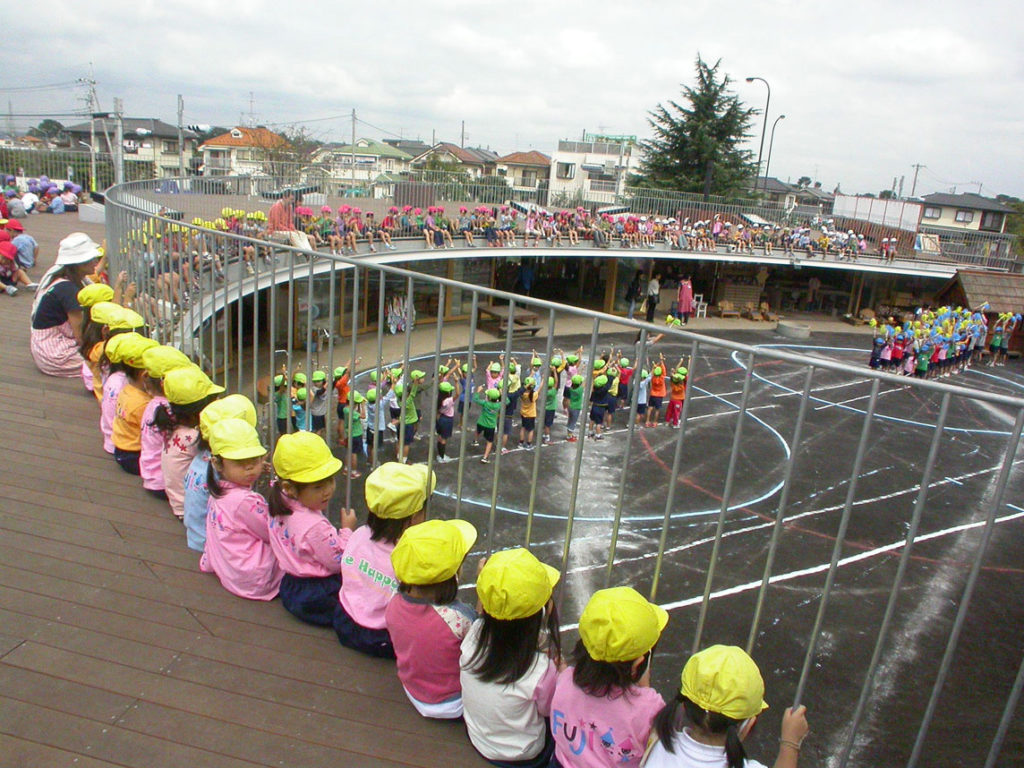 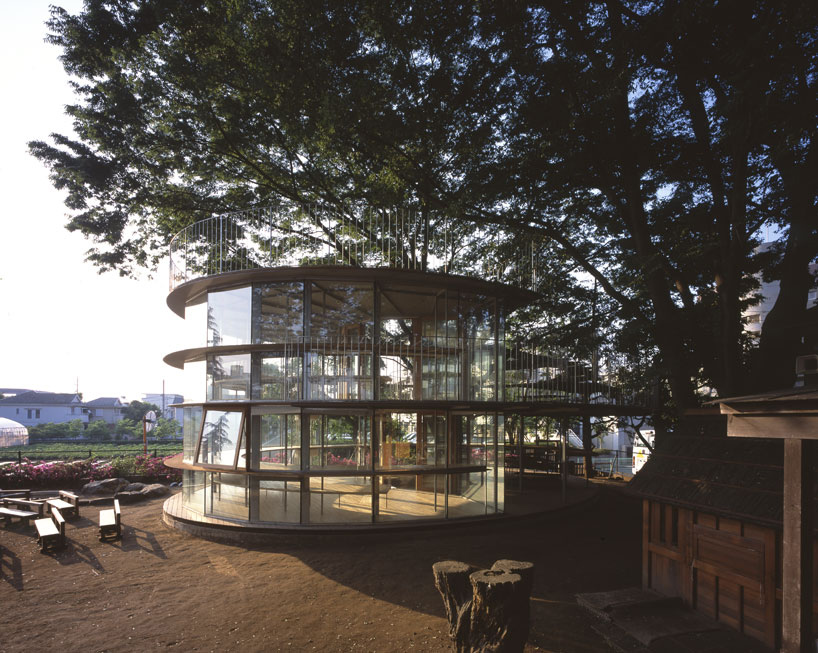 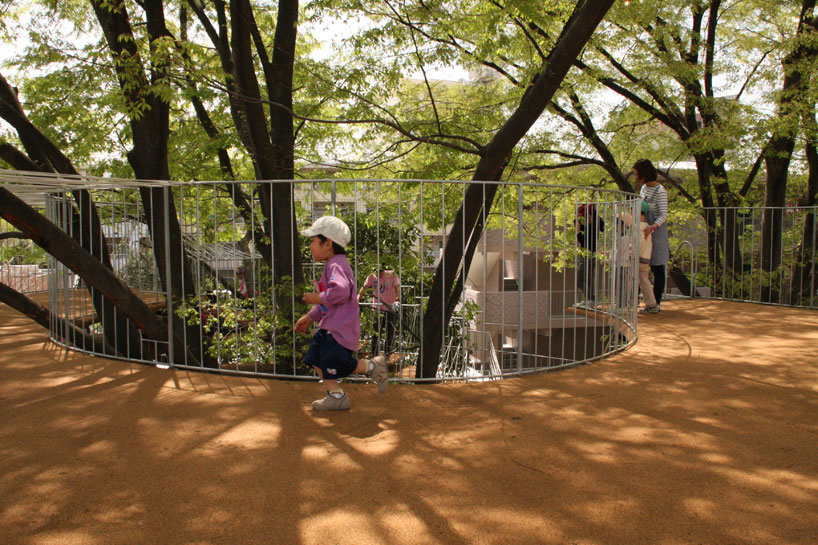 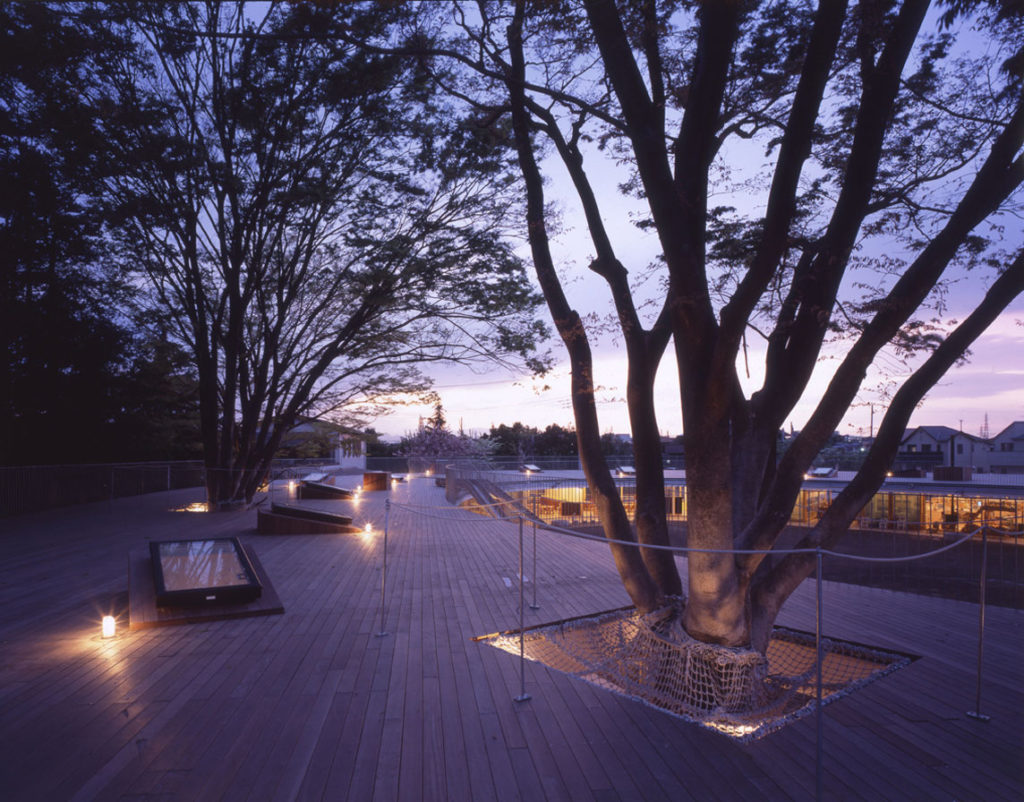 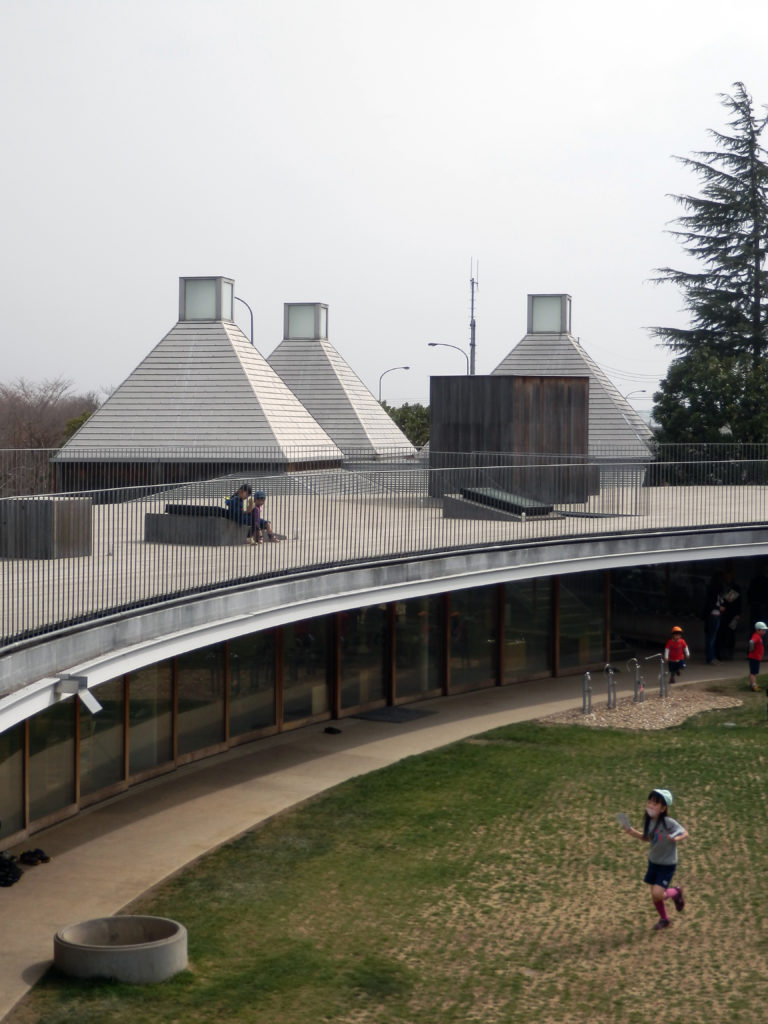 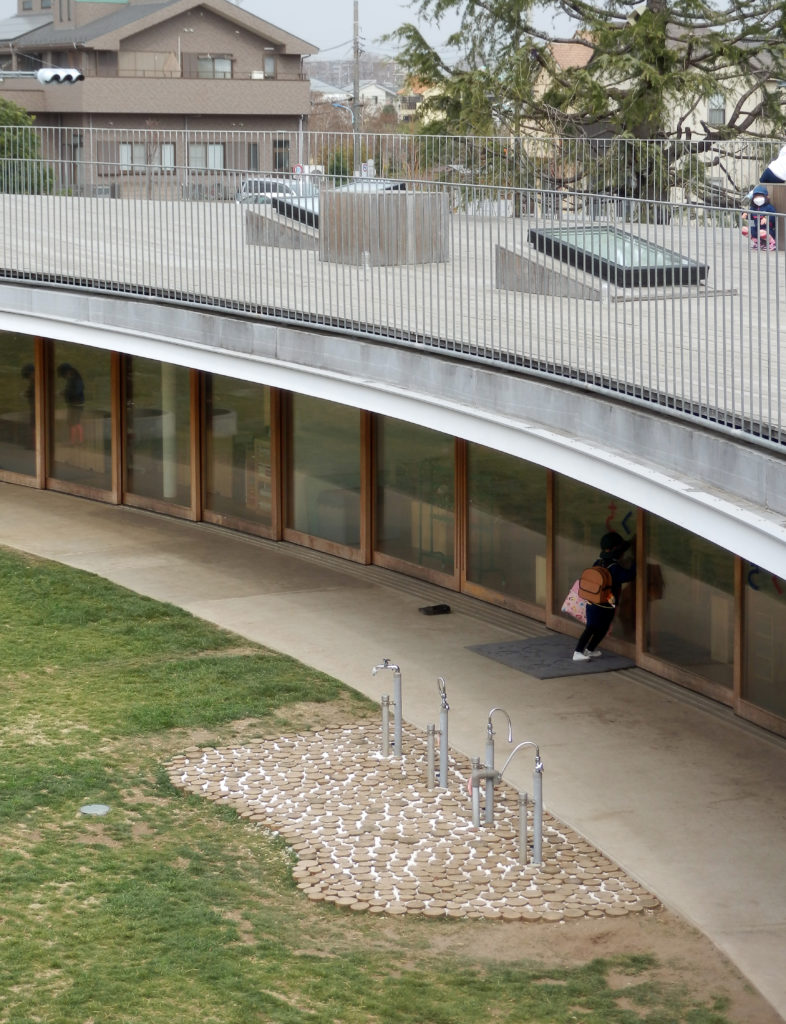 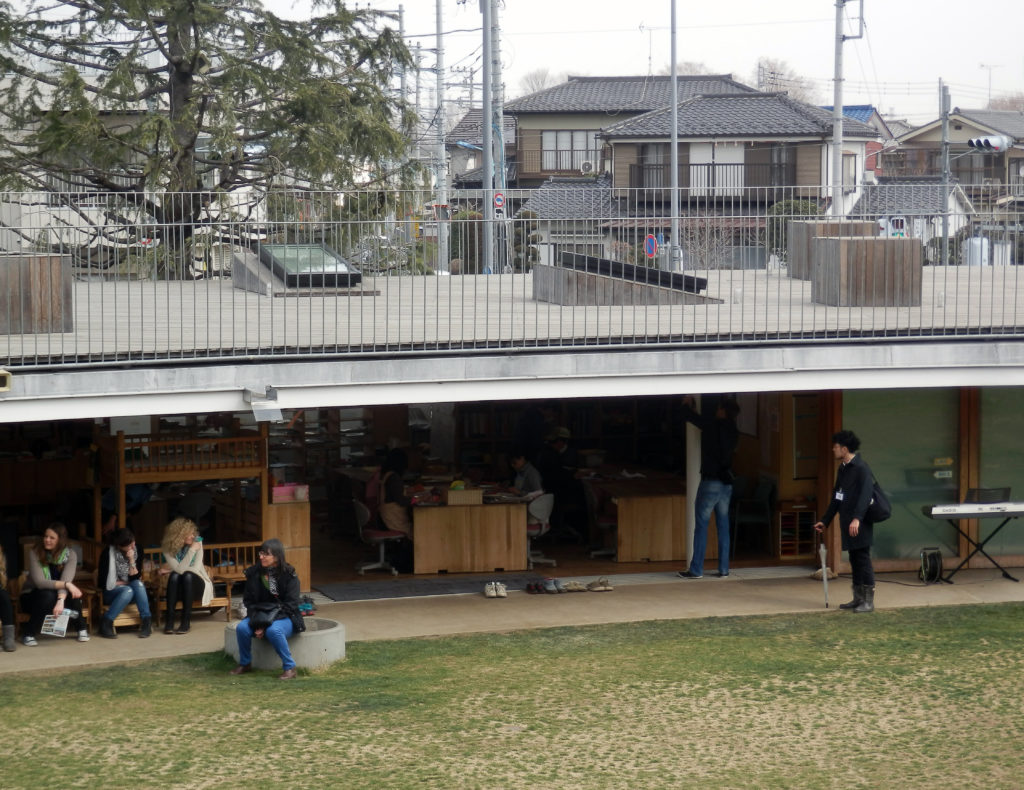 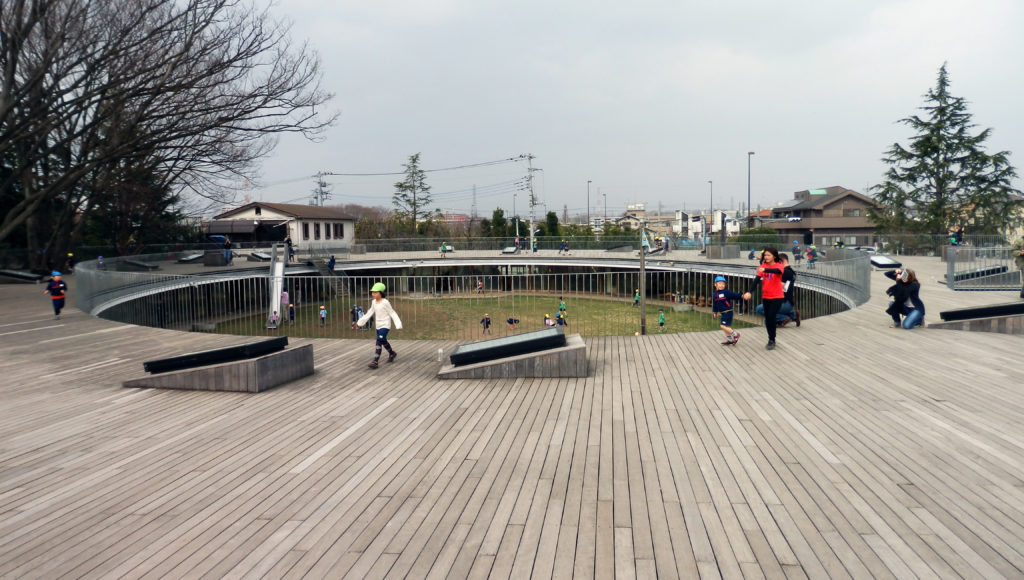 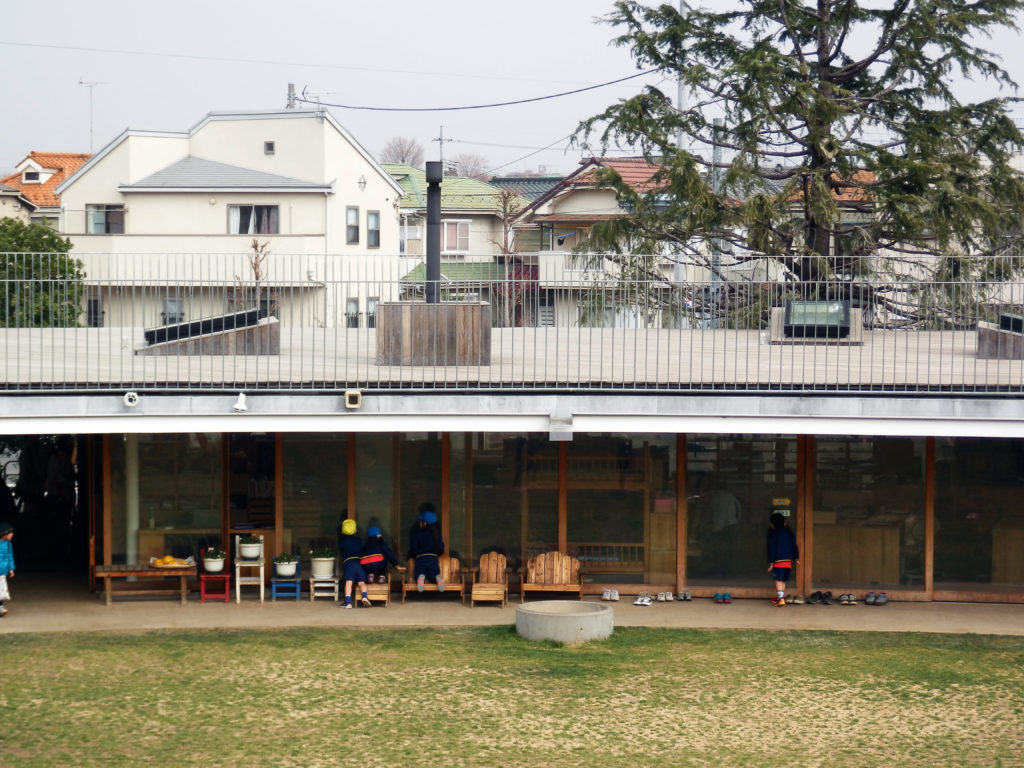 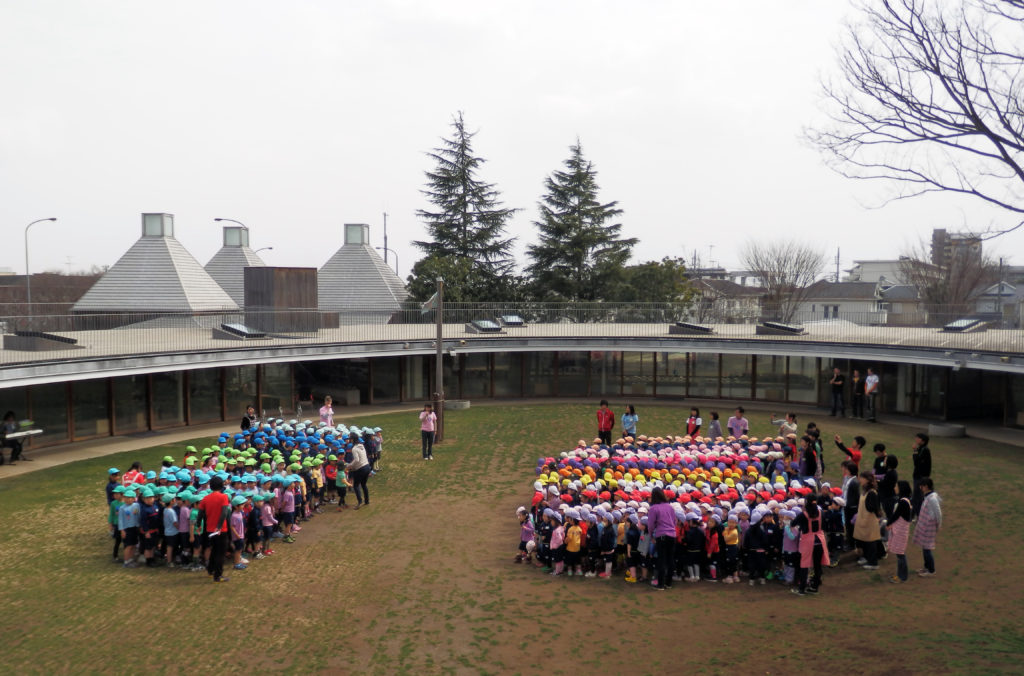 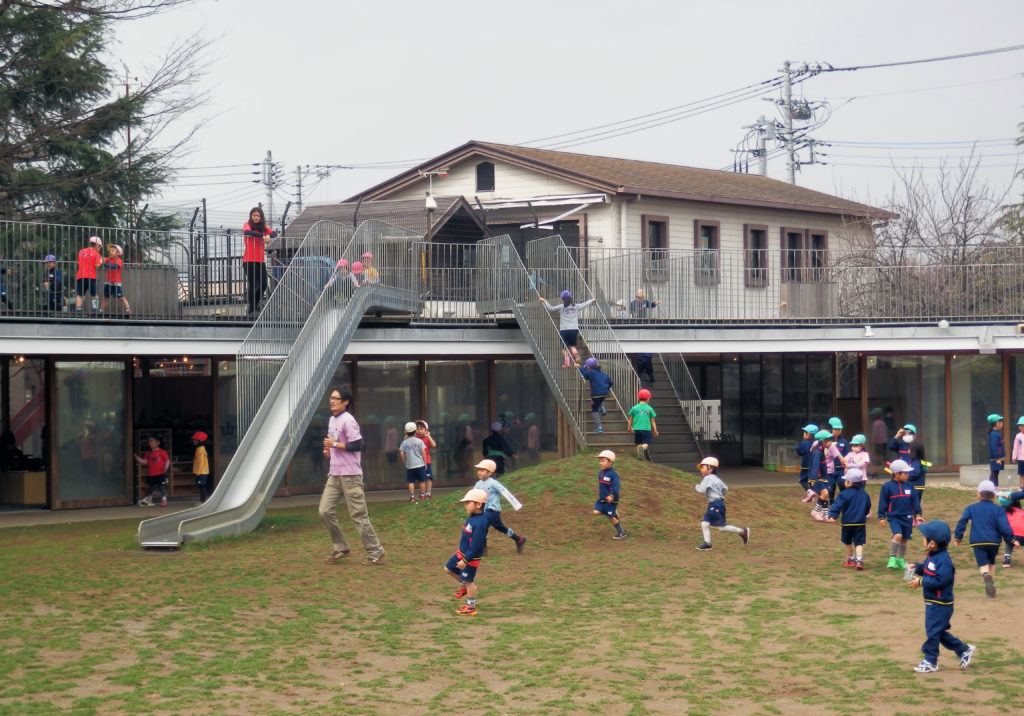 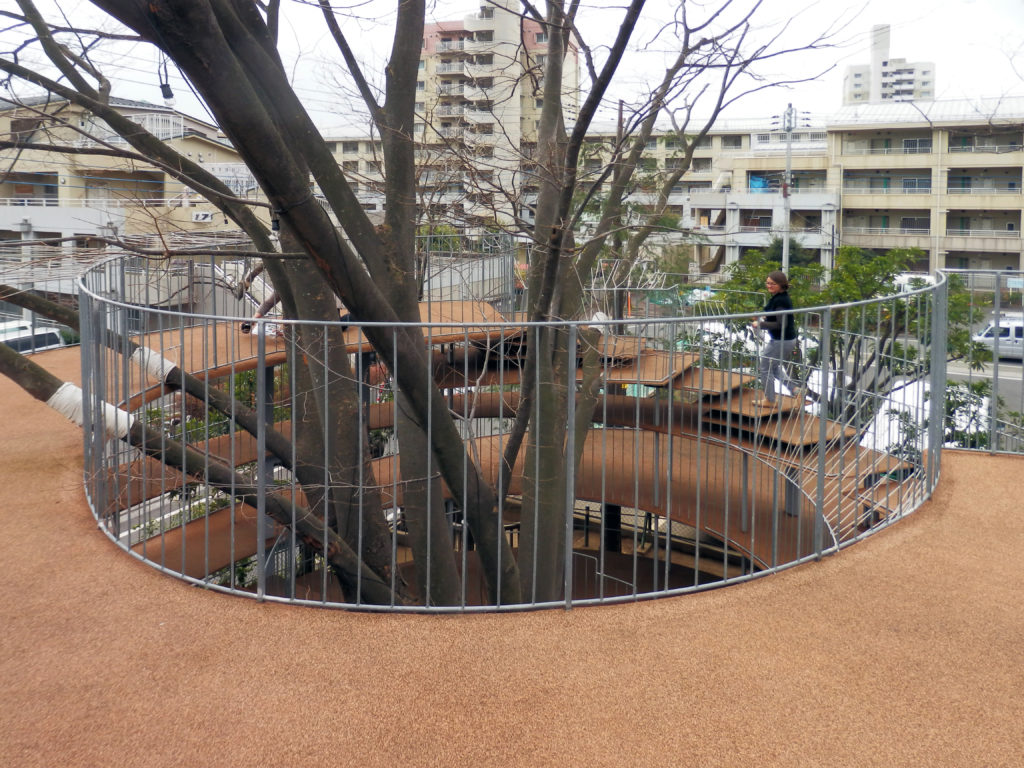 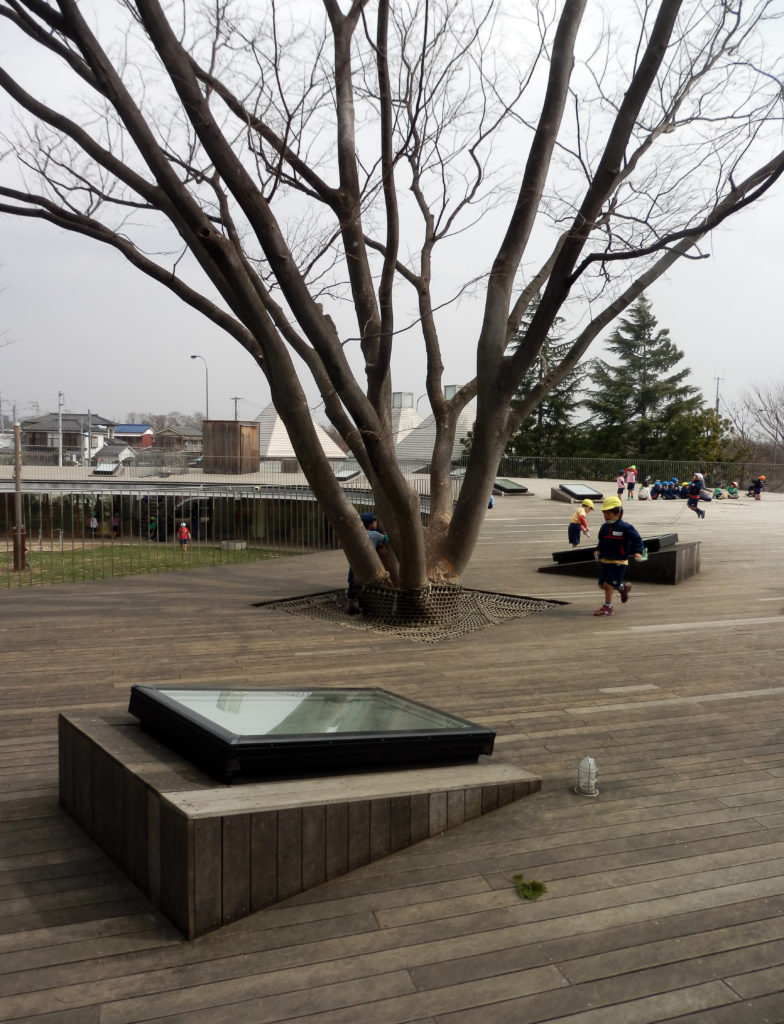