In the early twentieth century, Wright began a period of professional independence which focused on their task on a range of housing called “Houses of the prairies,” among which was the Freeman House, as well as the Winslow House (1894) and Willitts House, both in Illinois (1901-1902), the Martin House in New York (1904) and the Robie House in Chicago (1906-1910), among many others.
This first stage of its production, it gave Wright an international prestige that came to Europe.

It is located in a terrain slope on a hill in Los Angeles.

It was built with an experimental system of concrete blocks inspired by the Mayan and Aztec temples.

Throughout his career, Wright used the concept of grouping of different geometric patterns in which each represent the party and the whole. These grounds are indifferent to mask the scale and the properties of materials. That compositional principle explains the nature of its architecture, in which the methodology is in line with a constructive methodology ornamental. It is a system based on the constant repetition of embellishment which is subject to the inherent grid of the walls.

This house has a total integration into the surrounding natural environment, with marked aventanamientos horizontal lines, roofs outgoing prominent in the profiles of their facades and the formation of its plants around the fireplace.

The roof terraces are articulated with the sloping terrain of the hill on which it sits.

The protagonists in this book are the concrete blocks, modeled according to geometric shapes. To improve the resilience of the system, Wright placed a web of steel on the sides of the blocks. They also replaced the wooden molds for other metal parts thus more regular. The boards external disappeared after a semicircular slot that is filled with mortar to hold the gun. The mortar was discharged after placing the blocks, so it was not necessary to conduct a bricklayer specialized task. It was assumed that both the blocks as the walls were impervious to water. The only concession Wright regarding the vagueness of the system was the use of a double wall to improve the insulation through the air chamber that is generated between them. The truth is that this space was necessary to ensure the accuracy of the walls on both sides.

By not allowing the construction of torjados or decks, the system is incomplete. To remedy in this case the beams are lined with concrete blocks.

From the economic point of view the system was not a success. The lack of standardization prevented because each building needed a number of different pieces. In Freeman’s house was used two basic types of blocks – smooth and decorated – who came to join 56 different models.

The technical shortcomings of the system were obvious from the beginning. On top of the walls to water leak caused more problems than the production itself. One of the causes of the cracks, leaks and the generally poor condition of houses built with this system seems to be the mixture used to build the blocks. This was not suitable for the production of waterproof and neither was the proportion of Portland cement and sand used in its manufacture.

Although isolation was achieved through a double impermeable wall, the air leak in the inner chamber resulted in her convection air currents. Despite the reduction in the capacity insulator that this factor involved, the level achieved meet the demands of the era. Another problem is the ostensible of the oxidation caused by water seepage in the armor. Had we anticipated that this could happen, the injury would have been easily avoided galvanizing metal.

Freeman’s house is an exception in this system of houses with bundles of Wright. Here the corners are glazed by eliminating the therein column. Rather than being a simple cube built with covers and bearing walls, this house is close to the idea of the structural skeleton, as the chambers of air between the blocks are filled with concrete pillars and beams to create homogenous. 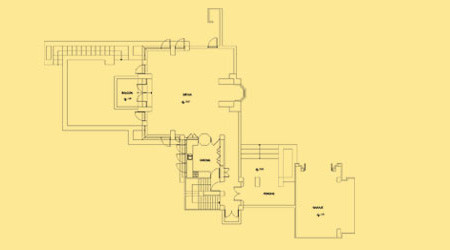 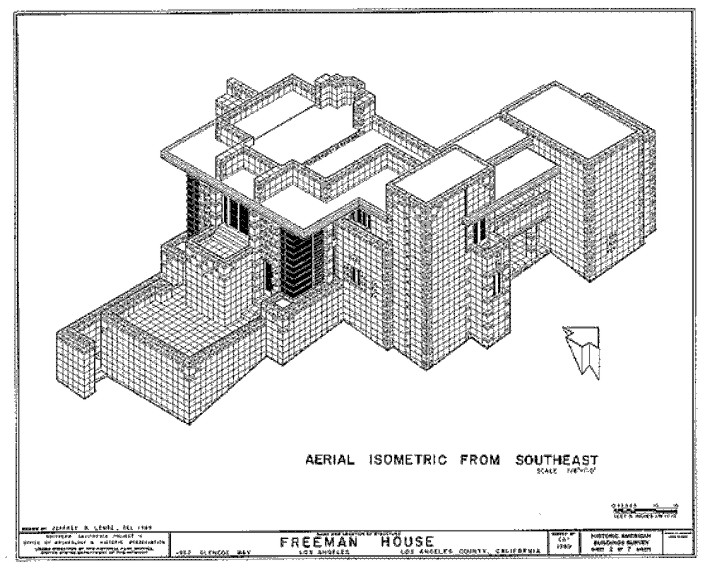 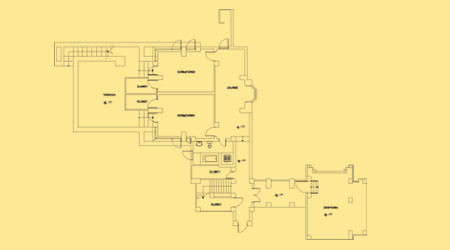 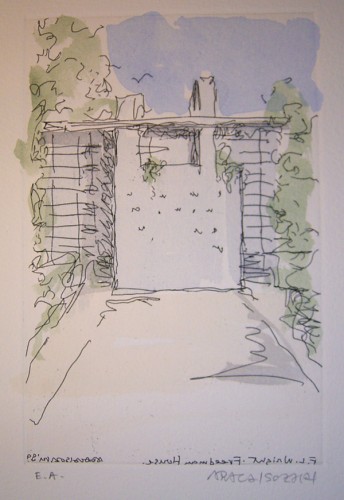 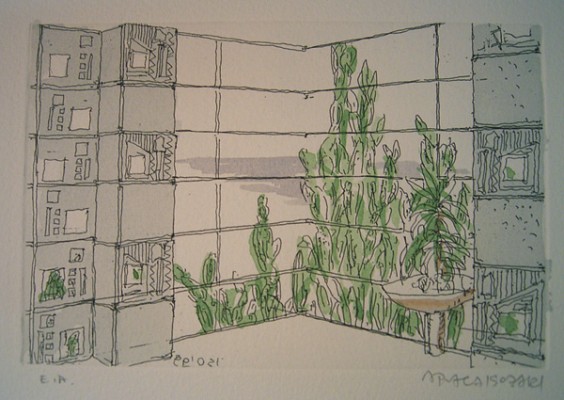 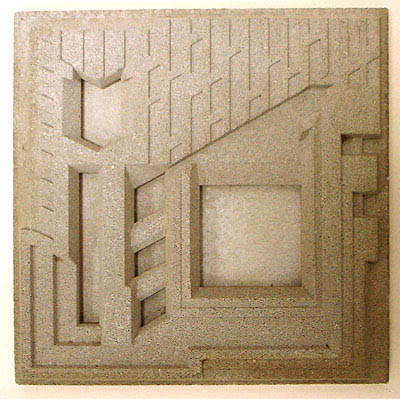 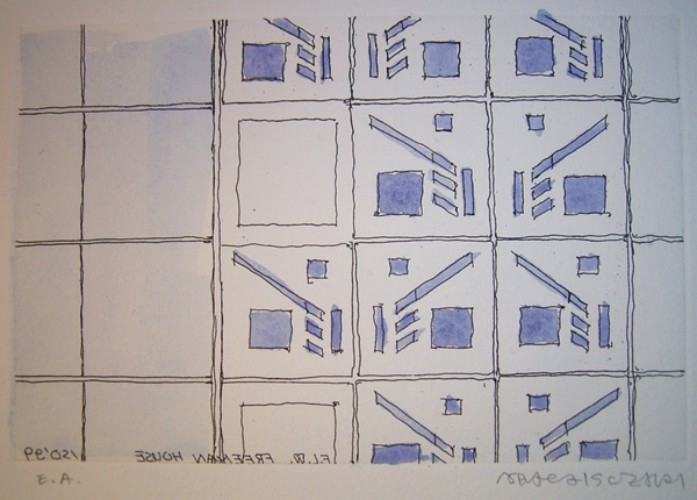 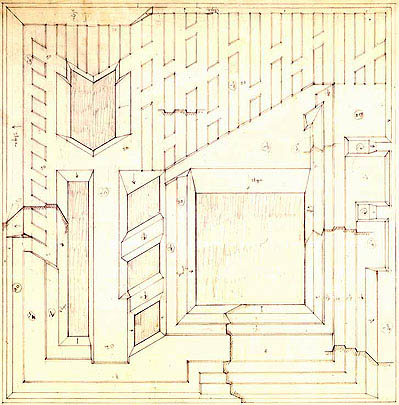 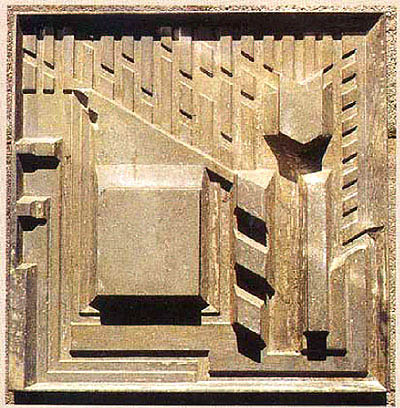 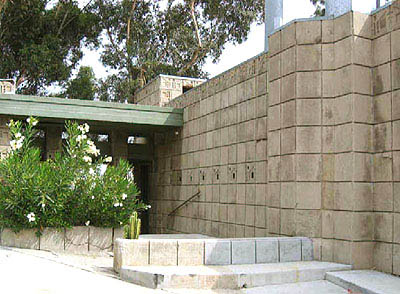 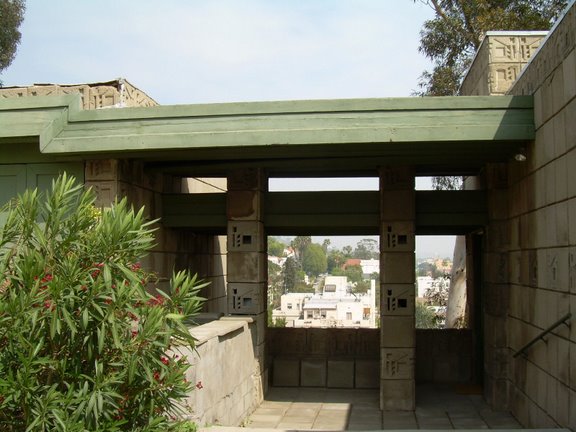 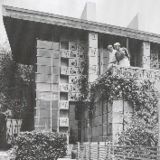 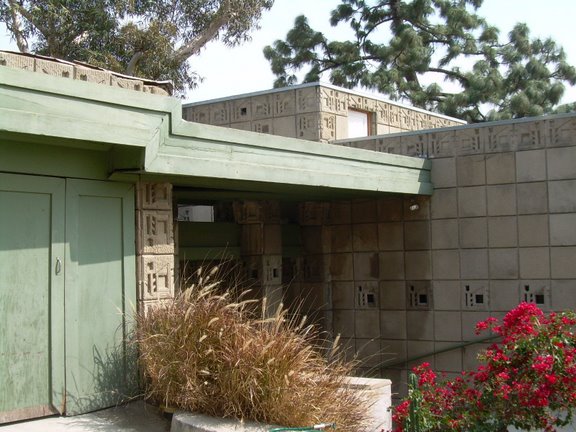 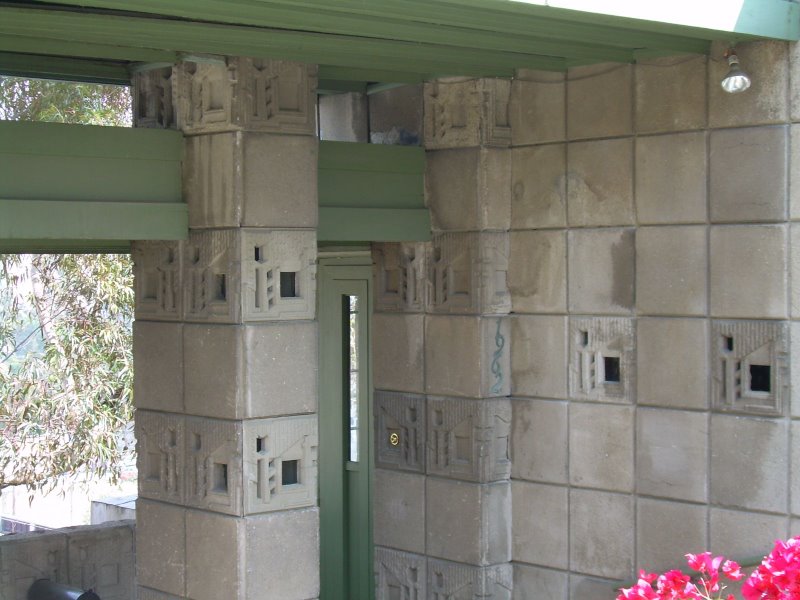 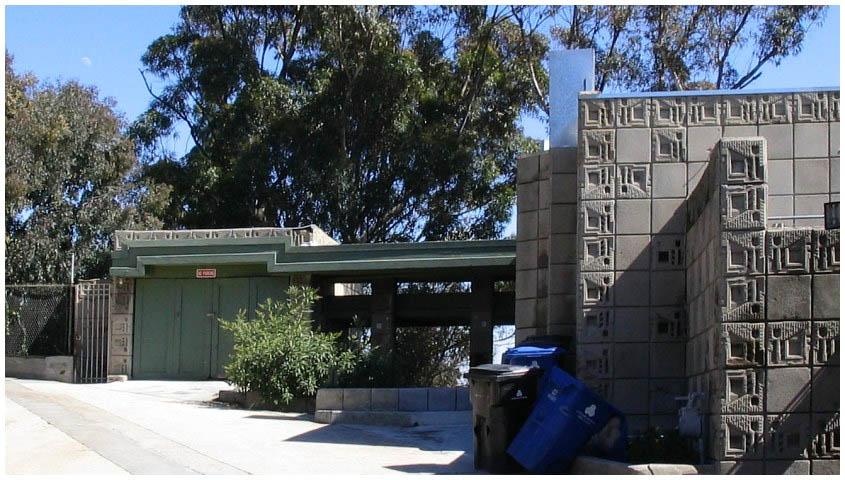 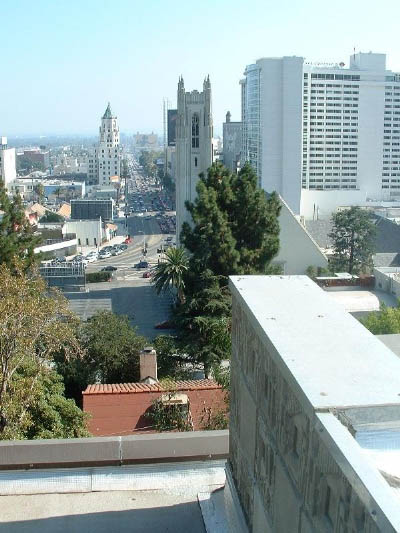 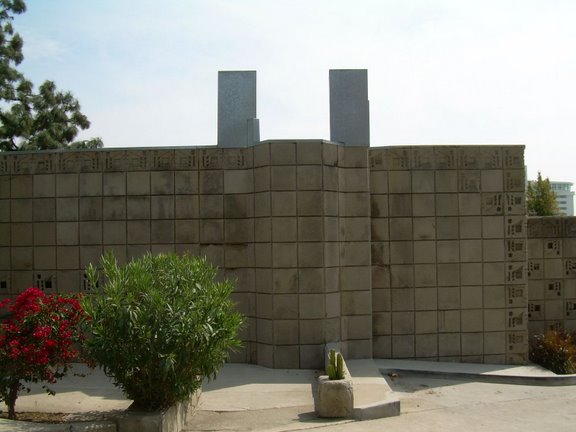 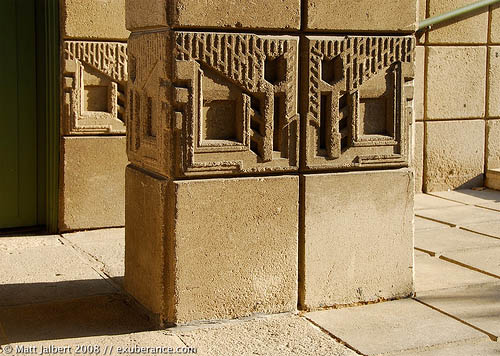 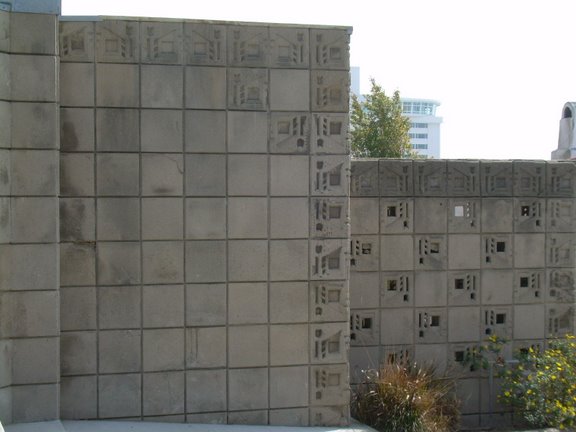 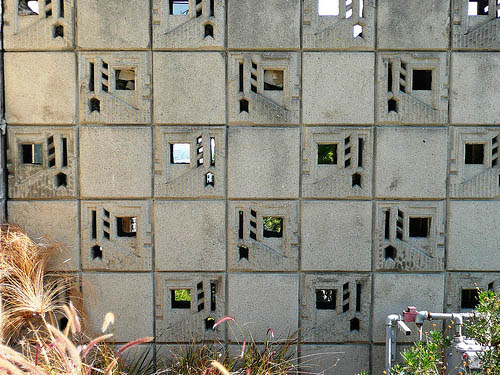 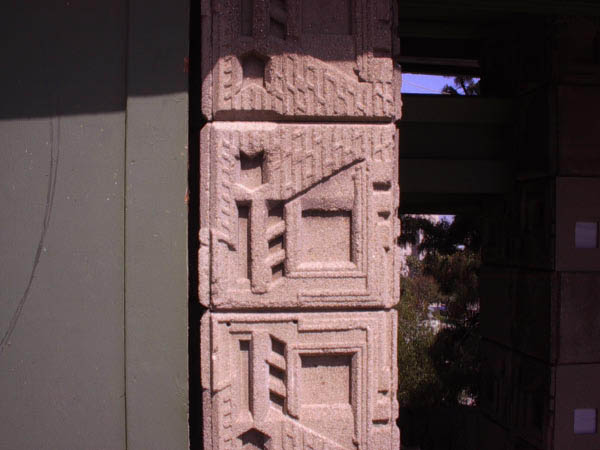 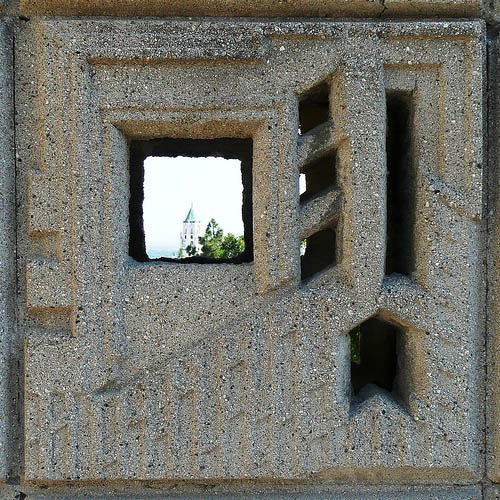 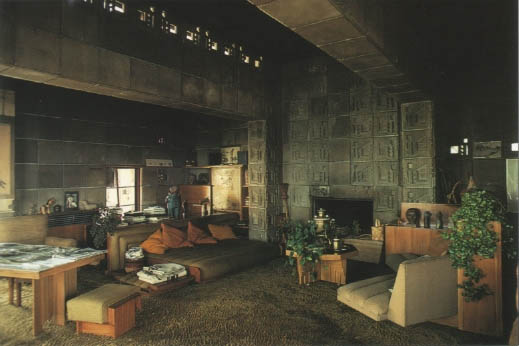 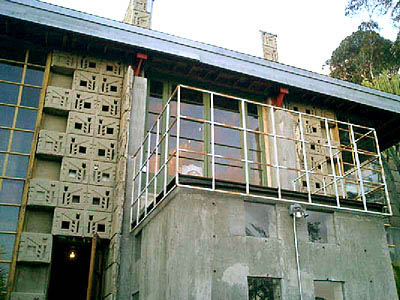 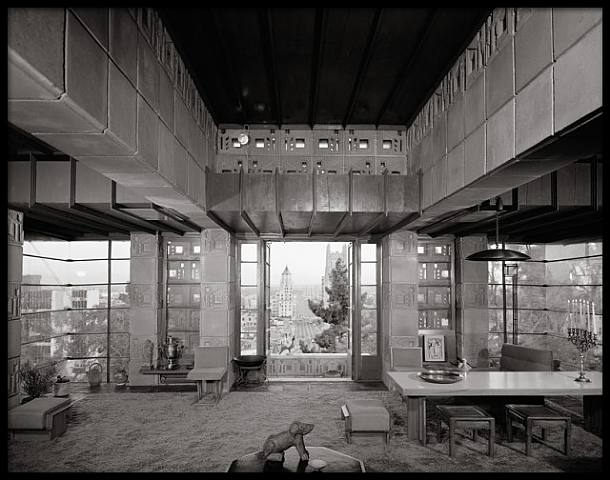 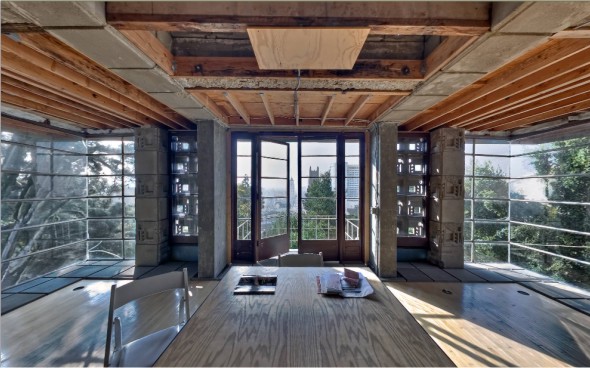