In the late 1960s, during a period of national urban renewal, the then mayor of New York, John Lindsay, intends to reinvent Roosevelt Island, at that time called “Island of Beauty” to convert it into a residential community. The New York Times defended the renaming of the island by President Franklin D. Roosevelt and the construction of a monument in his honor. The architect chosen to shape this idea was Louis I. Kahn, one of the masters of twentieth century architecture. In 1973, Governor Nelson Rockefeller and Mayor Lindsay announced the project and the name of the architect who realized. Before long, the Governor became vice president of the United States, Louis Kahn finished preparing your project and died unexpectedly, and the city of New York went bankrupt. Once dead Kahn, the study Mitchell | Giurgola Architects, in association with David P Wisdom & Associates, continue with preserving the original design intentions of the architect.
38 years later, on March 29, 2010 began the construction of the Franklin D. Roosevelt Four Freedoms Park, the posthumous work of the great architect.

On January 6, 1941 President Franklin D. Roosevelt gave a speech that laid the foundation on which the American nation was formed, a world based on four freedoms: freedom of speech and expression, freedom of worship, freedom to live without having need and freedom from fear. This speech made history as the discourse of “The Cautro Freedoms” (The Four Freedoms).

The Memorial is located at the end of the new garden area of ​​Southpoint Park, covering a total of 56.656m².
The Park Franklin D. Roosevelt Four Freedoms, which occupies 16.187m² of this area is located on a triangular plot, on the southern tip of Roosevelt Island on the East River between Manhattan and Queens, in the city of New York, United States. Looking south building is the nearest United Nations and northward Queensboro Bridge spanning the river.

Formerly known as Blackwell’s Island and later as Welfare Island, has been for many years the place insane asylums and prisons rose, then hospitals for UN workers were built. Among the most important ruins are the Smallpox Hospital, also known as Renwick Ruin, recalling the architect James Renwich Jr, which was built between 1854-1856. This ruin Gothic-Renaissance with a facade of gray gneiss is very close to the entrance to the Roosevelt Memorial and yet to be restored by local authorities. It was not until the mid 70’s first tram and then the metro arrived on the island.

“… I.I think that a monument should be a room and a garden, that’s all…” Why a room and a garden? He chose this as a starting point because the garden is, somehow, of a personal nature, its own way of controlling nature. And the room the principle of architecture.

The architect Gina Pollara, executive director of park construction commented: “….Kahn was working with perspective and geometry, almost like the ancient Egyptians. All visual corridors leading directly to the head, whether you’re in the green zone or on the road at an angle. The design is mathematically perfect… ”
That precision, almost militant in its design, is a metaphor for the role as commander in chief Roosevelt through World War II and the social causes during the Great Depression. At the climax, the monument itself is a simplified version, the homeless, a Greek temple of granite.
This pleasant public space is both like the prow of a boat pointing towards the building of the United Nations and a retreat for meditation.

In the dasarrollo design, Kahn makes perfect use of the triangular shape of the park facilities, emphasizing her, and in the use of what might be called a “forced perspective” to draw and focus the viewer’s gaze towards the Roosevelt head on the threshold of the “living”. In the design lies a naval theme, a nod, perhaps, to love and connection that Roosevelt had with the sea, taking advantage of the excellent location of place. Park design is symmetrical, and the drawings are designed for their development from a center line, as is usual in naval architecture. 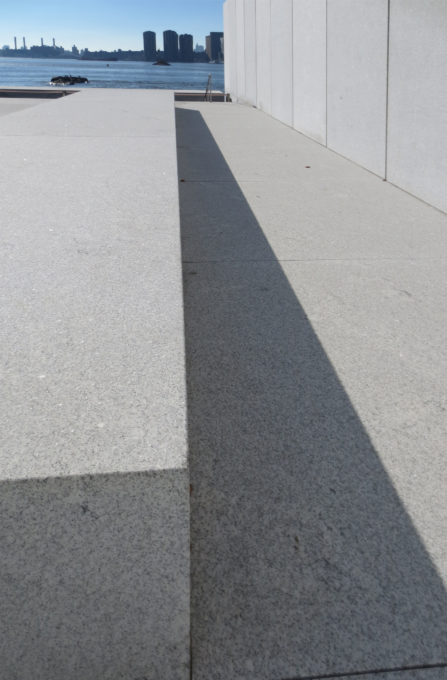 The monument, with an area of ​​16,184 m² has a plantation of 120 small-leaved lime and beech. Some first steps accompanying planter 5 you have road sweeping staircase centered between two ramps leading to an elevated plateau a few feet off the ground and extending, with a nod, up to the bronze bust of President Roosevelt and to the point focal Monument. Behind the bust, recorded on a granite wall, are the words of the president during his speech known as “The Four Freedoms” (The Four Freedoms), issued on January 6, 1941, 11 months before the attack on Pearl Harbor.

At the lower side aisles that elevated garden along the river, begins the deployment of granite blocks, lying, cut or standing, always starting from the same pattern measures 128x128x365 cm. On a lying block are engraved the names of all those who contributed and made possible the construction of the park. The road was covered with granite cobblestones. 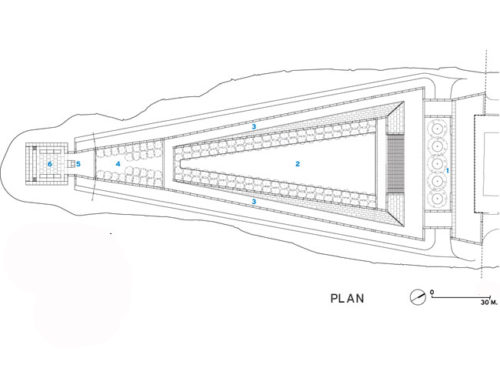 Approaching from the north side, and bottom of the stairs, opens before it a green space with a double row of trees to be narrowed as they curb the focal point of the park, “room”, the large space where the granite bust of Roosevelt, sculpted in 1933 by Jo Davidson is located.

The Memorial is a series of elegant outdoor spaces culminating in a square, “the room” of 3,600m2
The words of the speech Roosevelt are carved on one of the 36tn blocks that conforming “the room”, in the back of the bust, the focal point of the monument. This space, with blocks on three sides and open sky is called by the name than Kahn gave.
The blocks finely posished maintain a 2.5cm slot between that allows the entry of light and leftovers in a space that encourages meditation while allowing an unobstructed view of the East River, the UN building almost in front and entire skyline of New York in the riverbank. 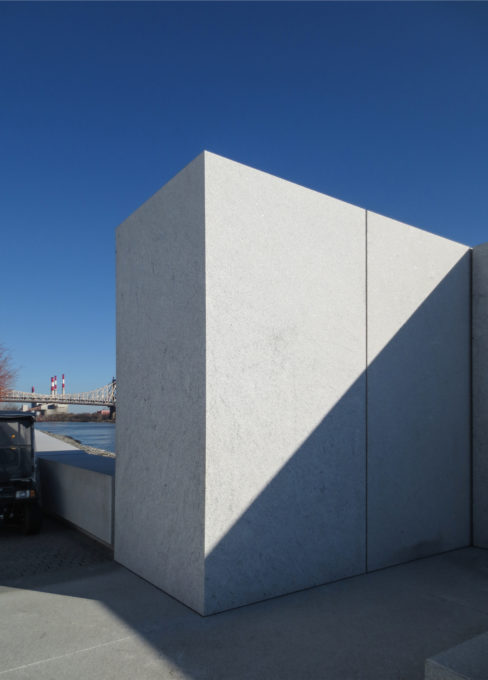 The Monument is entirely built with granite brought from Mount Airy North Carolina by boat. We have used 190 granite blocks, 70 of which have a monumental size, such as “the living”, 128 x 128 x 365 cm, weighing 36tn each, in some cases to suit your particular location were cut into two or three parts, always in the same pattern. The soil blocks were fitted with steel parts. In contrast to the harsh ways of granite, Kahn put five beech trees at the entrance of the monument and two rows with 120 small-leaved lime trees leading to the monument and bordering a grassy triangular space. The trails bordering the green space are filled with gravel marble.

Throughout the park, except in the space occupied by “room” were placed by hand 261,000 cobblestones and lights recessed floor. The passes hands of the access stairs are pieces of curved tubular steel and steel stairs approaching the river at the end of the monument. 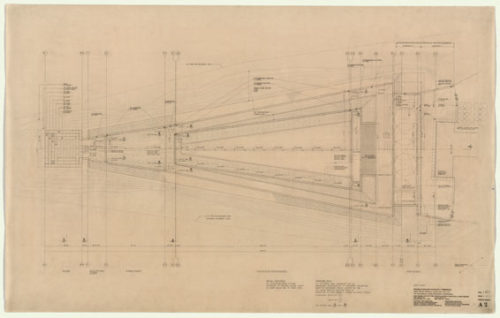 Construction of the park needed 30 months and the first phase was the construction of “the Chamber”, completed in 16 months. In general, FDR Four Freedoms Park is considered the heaviest and professional work in stone in the city of New York, because of the size of its parts and the very difficult adjustments that were needed to place the stones following the original project.

The words of President Roosevelt were recorded by hand on granite by Nicholas Benson, who belongs to a third generation of stonemasons. Benson, owner of The John Stevens Shop in Newport, is known as a master carvings made ​​by hand lettering and decorative inscriptions and reliefs can be seen throughout the US, including the Yale University, Gallery National, Memorial WWII or dedicated to Dr. Martin Luther King.

“The Room” is supported by a combination of stone foundations and drawers, and “breakwater”, the rock barrier that protects the edge of the island of erosion, consists of 8,500 cubic meters of gneiss granite placed by hand, 65% of which was recycled in the same place.