Fountain of the Four Rivers

In the south-west corner of the square Pamphini family decides to build his palace which initially focused on the nearby square with a lot more “glamor” at the time. Soon the unstoppable growth of the Piazza Navona with other circumstances they will make a reform that overturn the palace to the new plaza.

Giovani Pamphini, second son of the family, he sent as the rules of the time to race in the church that gradually gained power.

After some family ties became Pope thus becoming the Pope Innocent X.
His predecessor crash was remembered for his way of spending the money from the coffers Papal so Innocent X was forced to moderate its budget. Still refused to renounce the establishment of a residence in the style of the ancient Roman emperors who were going to be your face to the world. An increasingly pagan world should not forget that even the power exercised according to the church and the idea of Innocent X, you would not see the splendor of his palace.

Recall that the former emperor Domitian set up his residence in Mount Palati (site of major historical events and biblical) where he had built two buildings, one Domus Flabia corresponded to the public part of the residence and the other where they were Agustiana Domus their own rooms. Both were connected with each other and in turn they were with a third space devoted to entertainment and fun.

With this in mind Pamphini Giovan Batista could not find a better location for the palace residence of the family in the Piazza Navona. To carry out the reform needed to purchase all properties located between the palace and the church of Santa Ines (located in the center of the square) and 164X care reform bill to XXXXXXX.

This new residence, as in the emperor’s Dominciano are 3 distinct parts, the palace itself represents the private party, the basilica is the public part and the square that joins, where he was before the old circus, the area will be Events.

To decorate this great square charge in the year 1645 to the architect Borromini a new drive to Piazza Navona water away from the window of the Rome residence of Barberini (predecessor Pope’s family) and moved to its new position “private.”

Striking that the Pope did not handle the responsibility of the source water specialist in Rome and Bernini sources, although their decision was undoubtedly bound by the following two reasons:

With these incidents in mind the project is responsible Borromini which is in a boom time in his career.

Borromini proposes the crown with an obelisk and fountain at its base represented by heads of leon 4 jets of water as the 4 major rivers of the world known so far. The Danube for Europe, the Ganges for Asia, the Rio de la Plata in South America and Africa to the Nile.

In 1948 the Pope ordered to Piazza Navona move an obelisk that is left in an old circus in town. To impose the costs of transferring a payment of 25 badges to all works that are running on Jan. town.

By the same date are the first documents pointing to Bernini and future author of the source instead of Borromini.

There are two versions about how he made Bernini with the task:

The fountain was officially opened on 12 June 1651, however, began operations on June 8 when the Pope came to his last visit to the works. Upon reaching the source close to the Pope asked Bernini not yet flowing water from the source to which most Bernini was unable to answer that this was a complex process but soon brotaría expected water source. The Pope was taken off the promise of Bernini departed but while I hear a sharp noise, turned to see the water was falling from the four landfills in the font. Was stunned to see such a spectacle and slapstick tone told Bernini: Bernini, I’ve returned to play! Referring to how Bernini had done with the order.

During the hottest days of the Roman ferragoso increased water flow from the source inuncando the square and a cooling eeran lso passer squ tainted by the passing floats.

The Pope had achieved its goal of creating, as the ancient emperors, a place of entertainment “circus” in front of their properties.

Years later regret Bernini was the “bad art” that used to take the order.

The Fountain of the Four Rivers, known as the “Fontana dei Quattro Fiumi” in Italian, is located in Piazza Navona in Rome, taking over where once stood the circus Domitian opened in the year 86 AD by the emperor who gave his name and was used until the fourth century when street disuse and eventually even be used as a rock quarry to supply to new buildings in the city.

From there the early fifteenth century buildings around the old track of the circus (that is, on the old stands) creating the current Piazza Navona. This new plaza is home to the markets even a regular in the city.

Using the idea of Borromini 4, Bernini redesigned the fountain based on the rivers of the world by changing the original classic design for one more static and dynamic, with representations of human figures, leaving empty the support of the obelisk, which clearly represents the dynamism of the Baroque movement itself.

The basis of the fountain appears at first glance one carved in the rock found in addition to human figures 4 representations of flora and fauna representative of each continent.

The human figures were made as we know in the receipts of payments for assistants while Bernini travertine stone at the base where they are represented fauna and flora of the works were Bernini.

The base of the fountain showing the fauna and flora are carved on a rock Travertino. The human figures were carved in marble rock workshops and then assembled on site.

Fountain of the Four Rivers 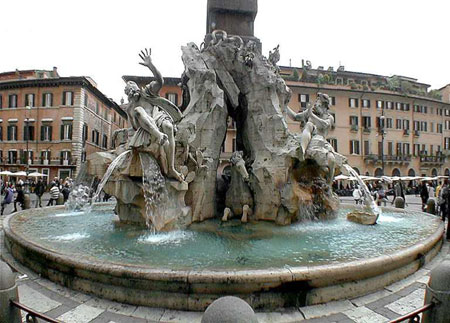 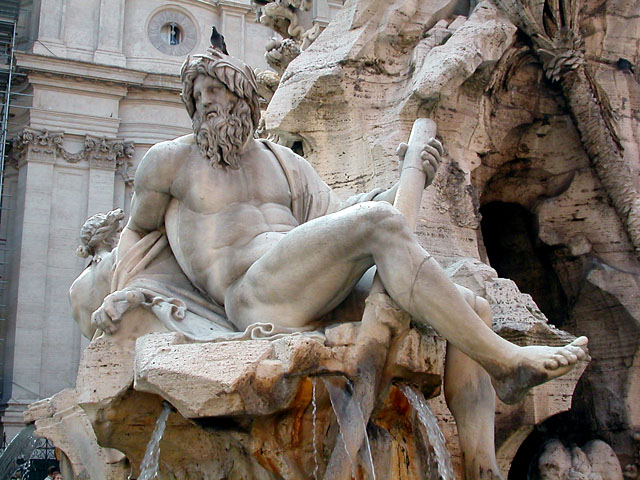 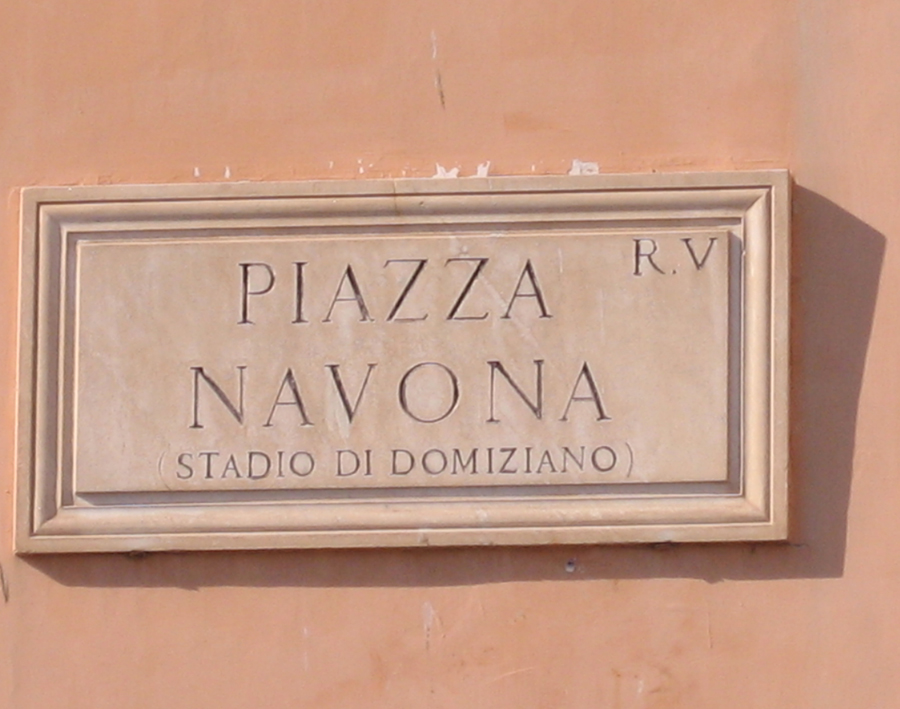 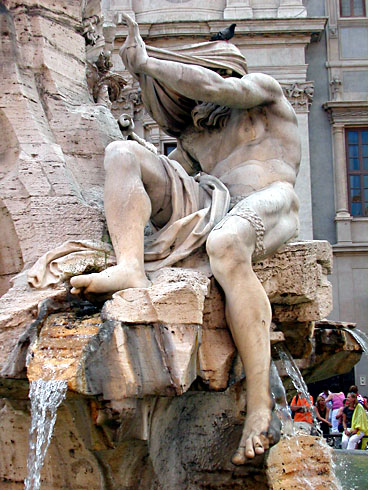 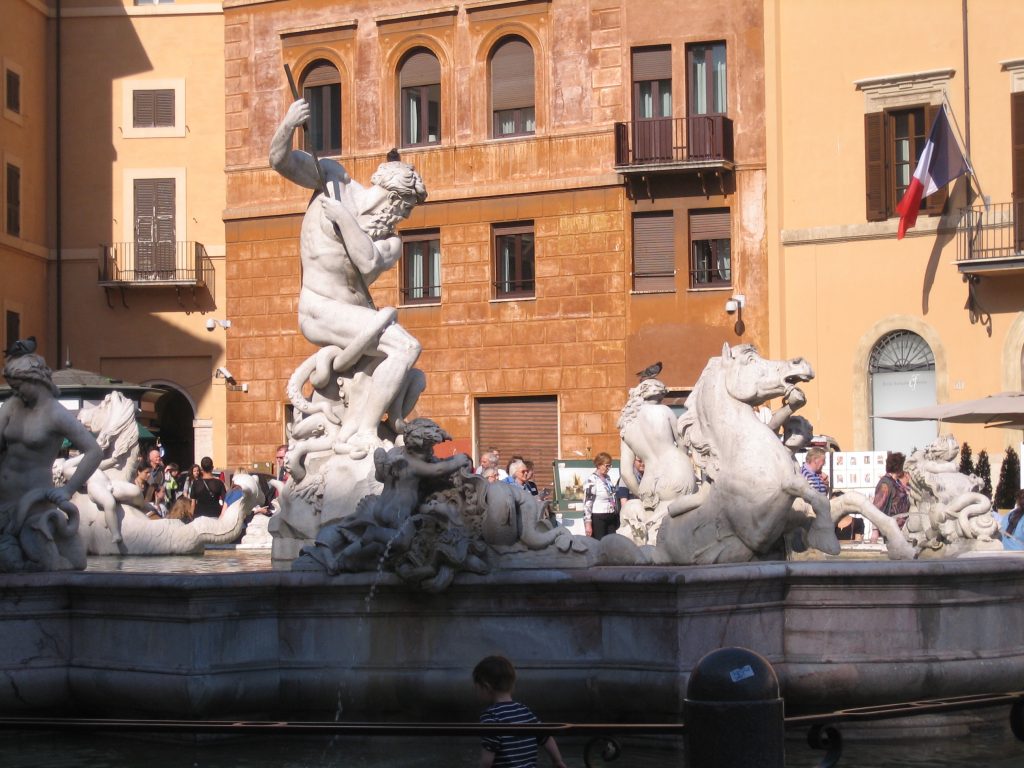 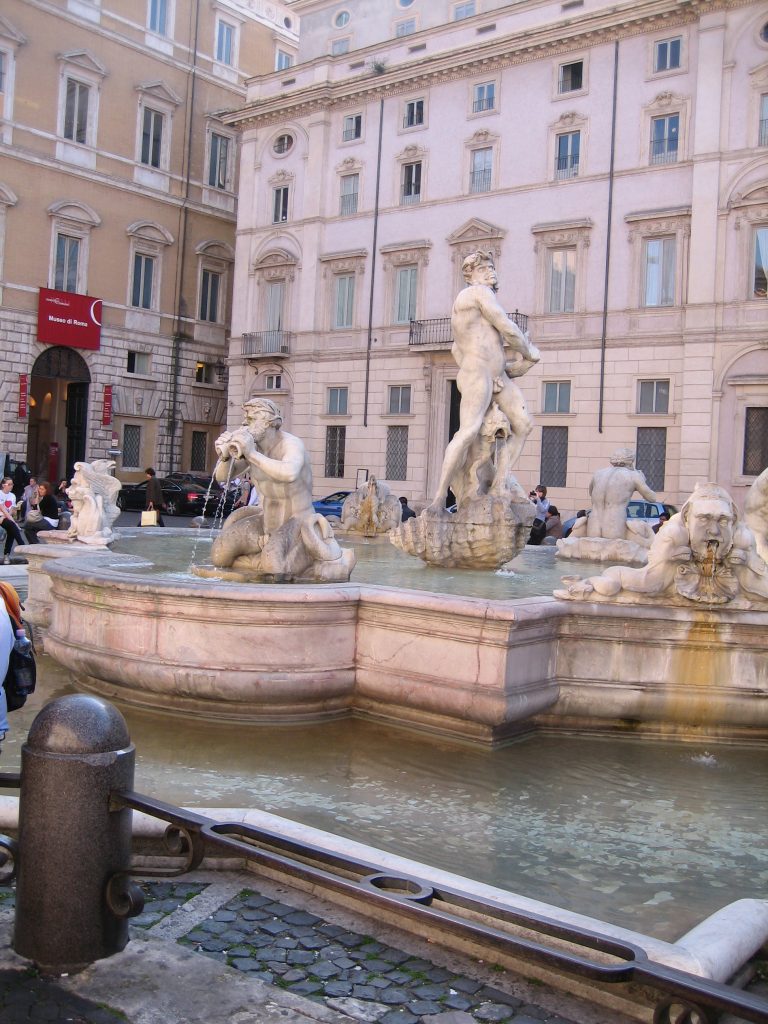 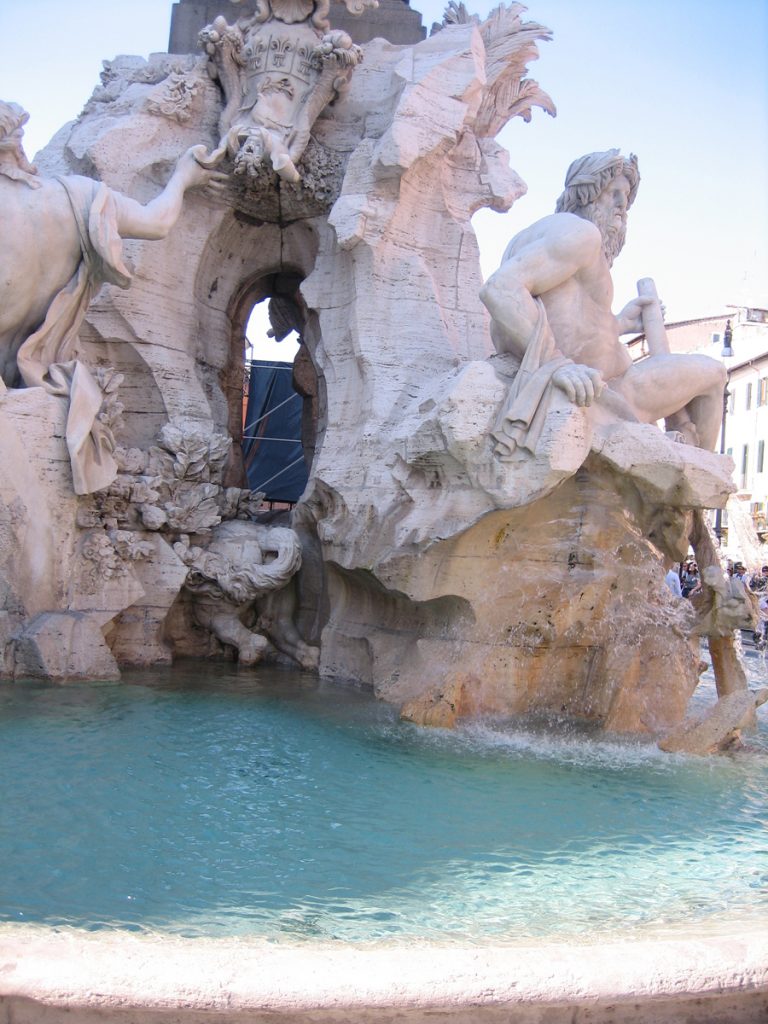 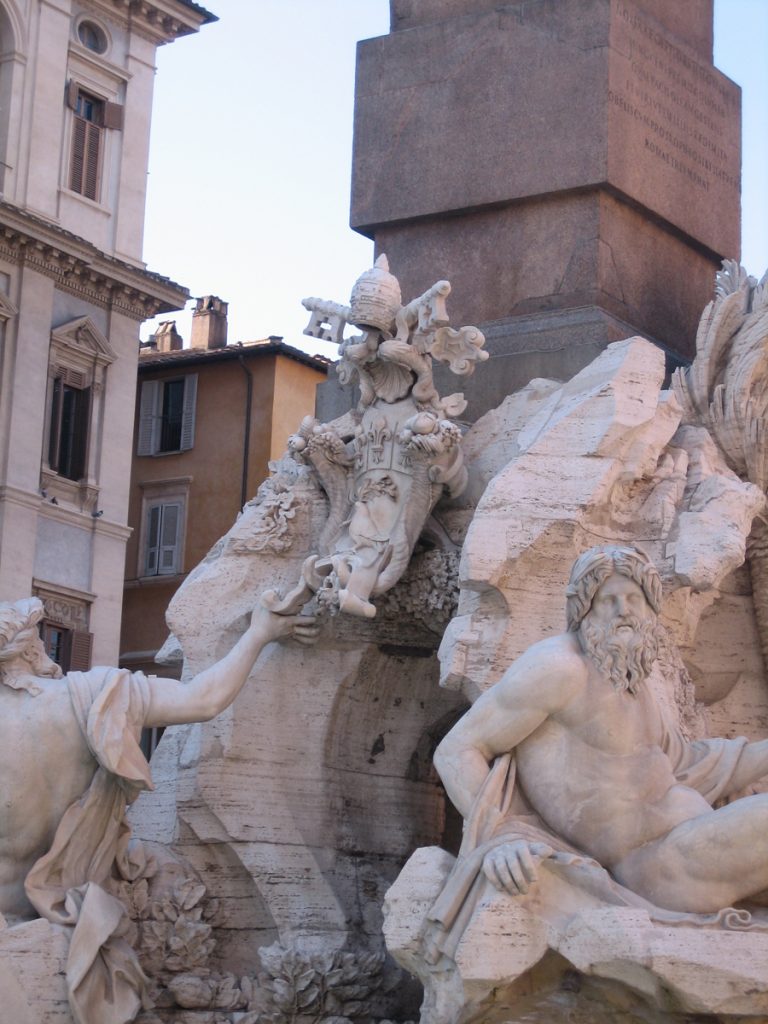 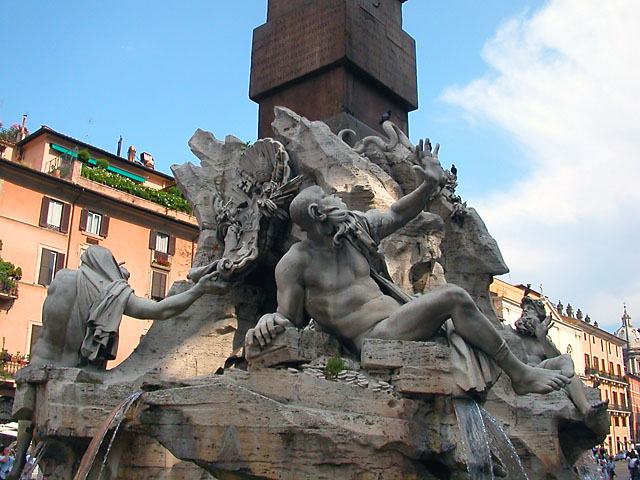 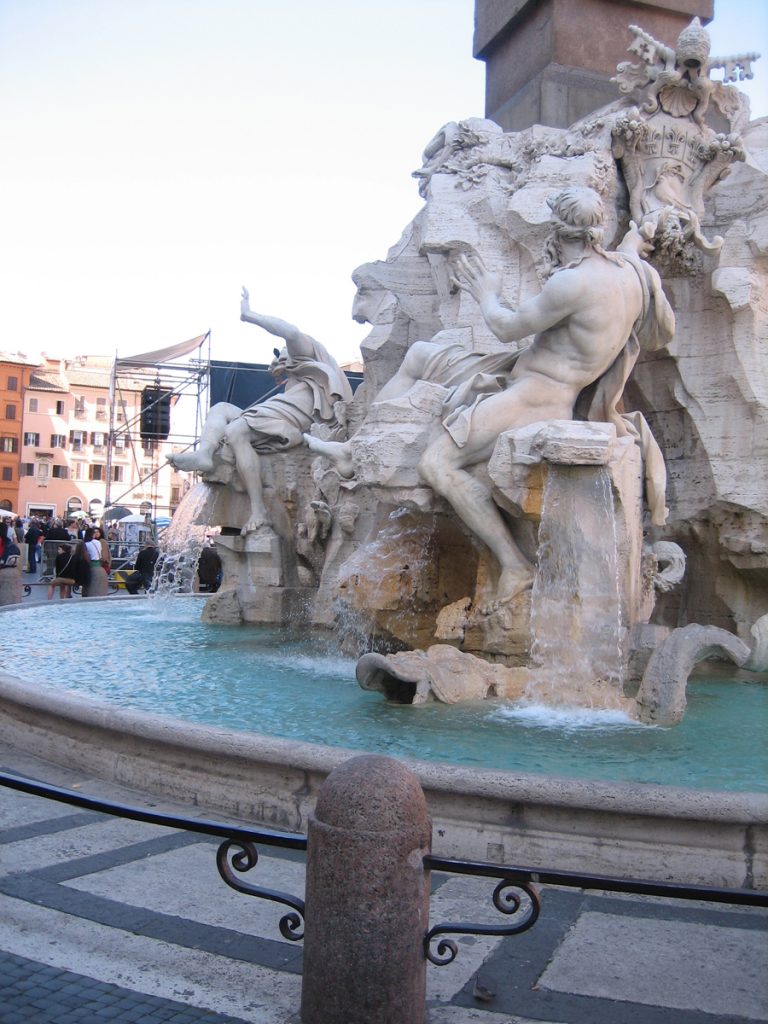 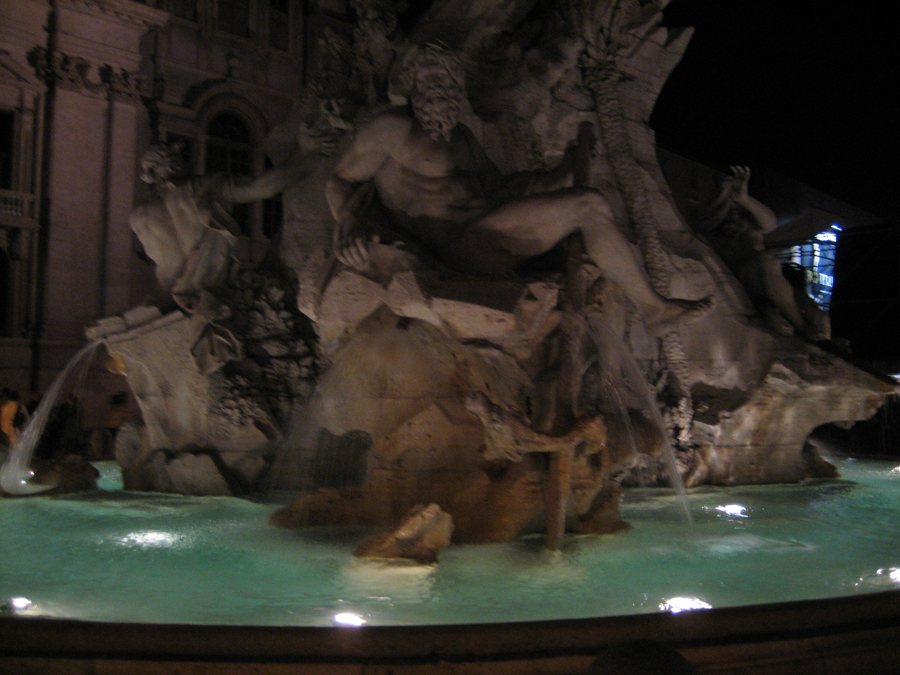 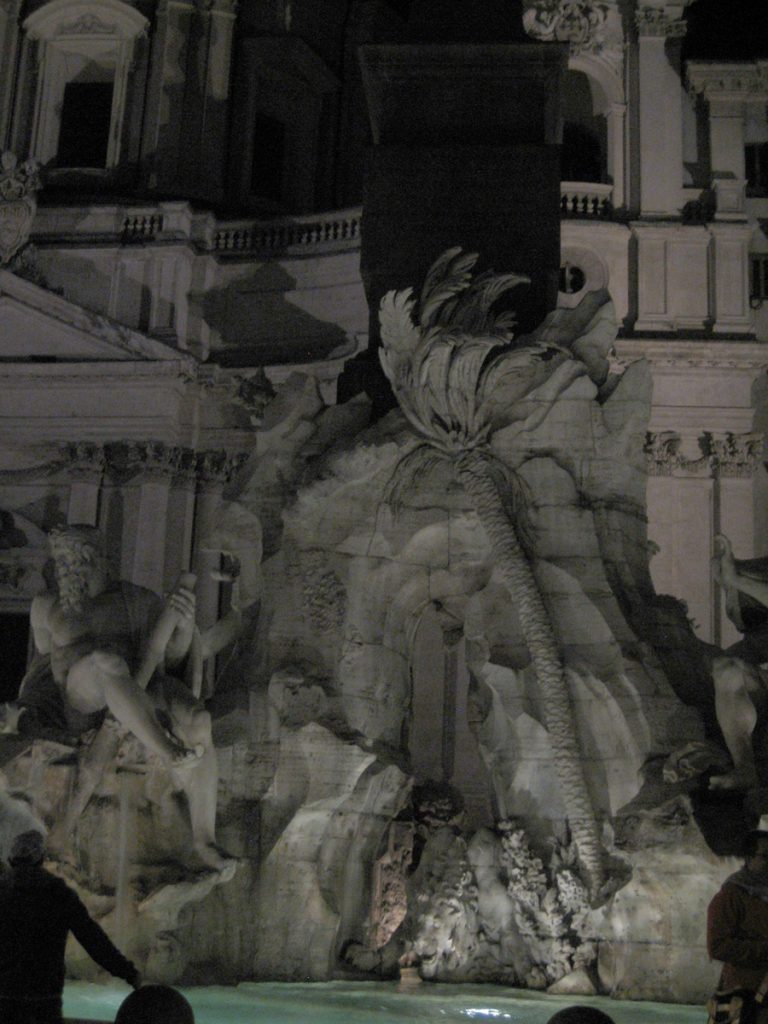 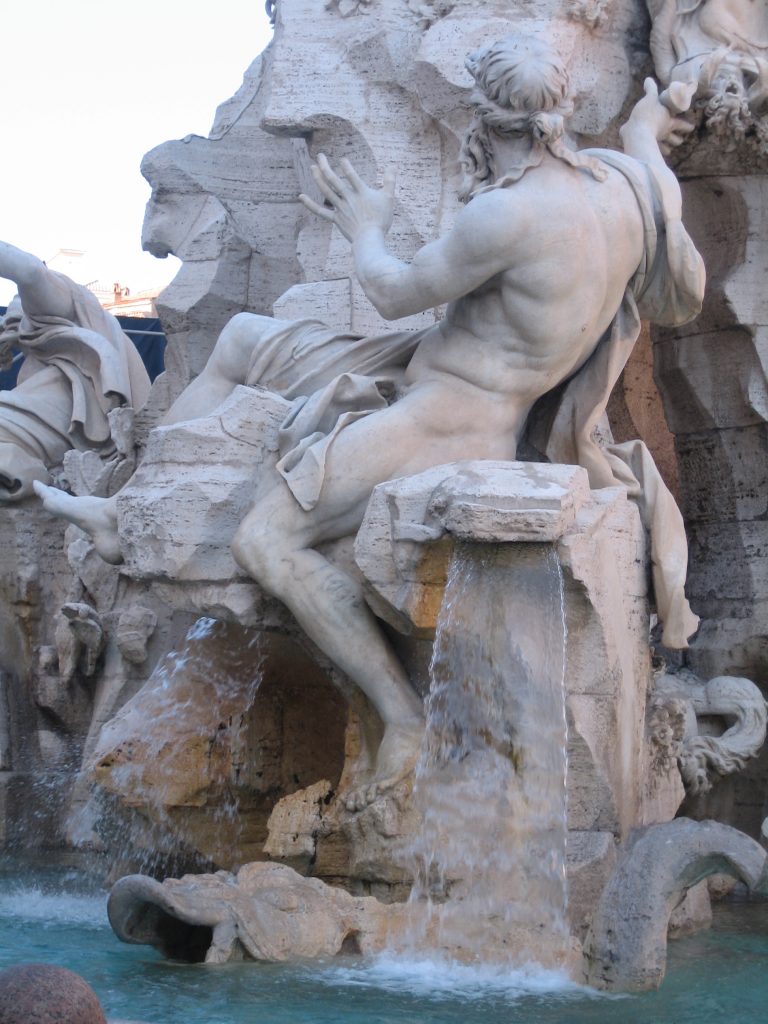 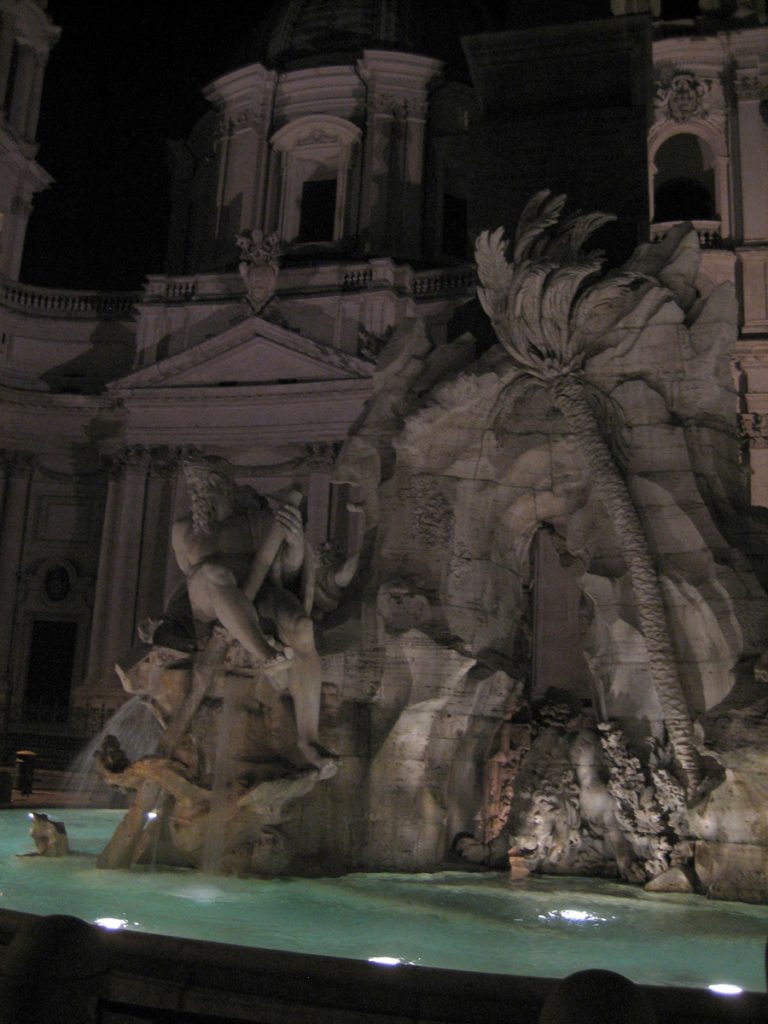 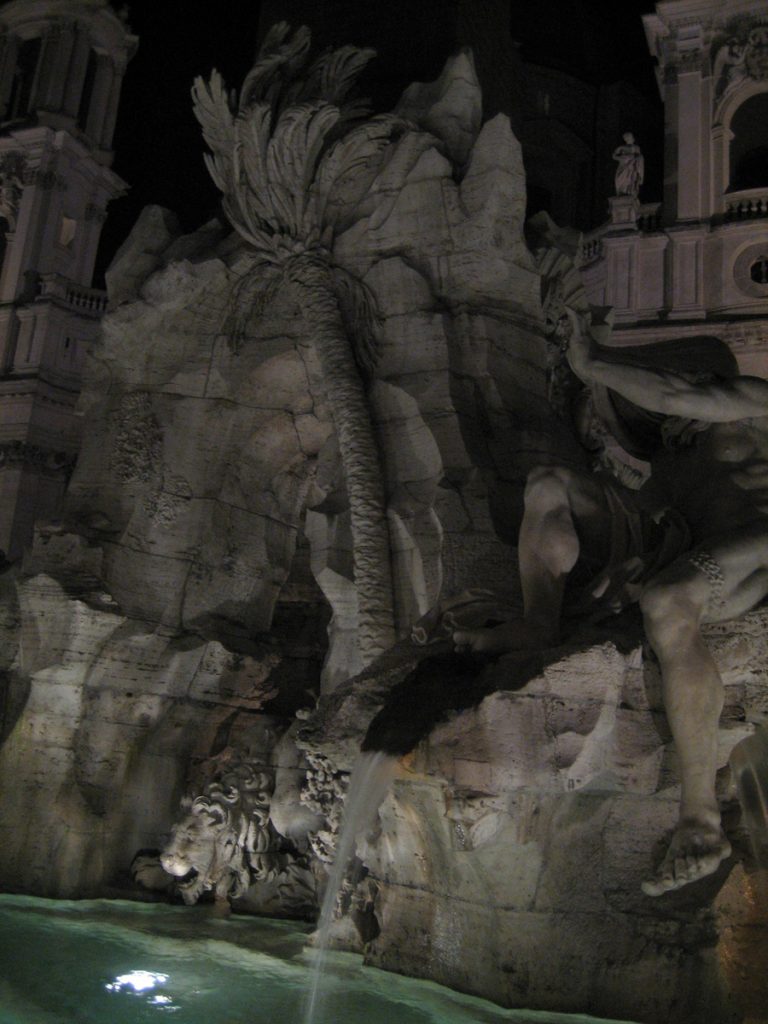 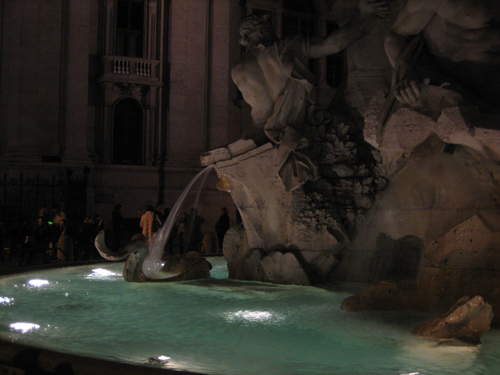 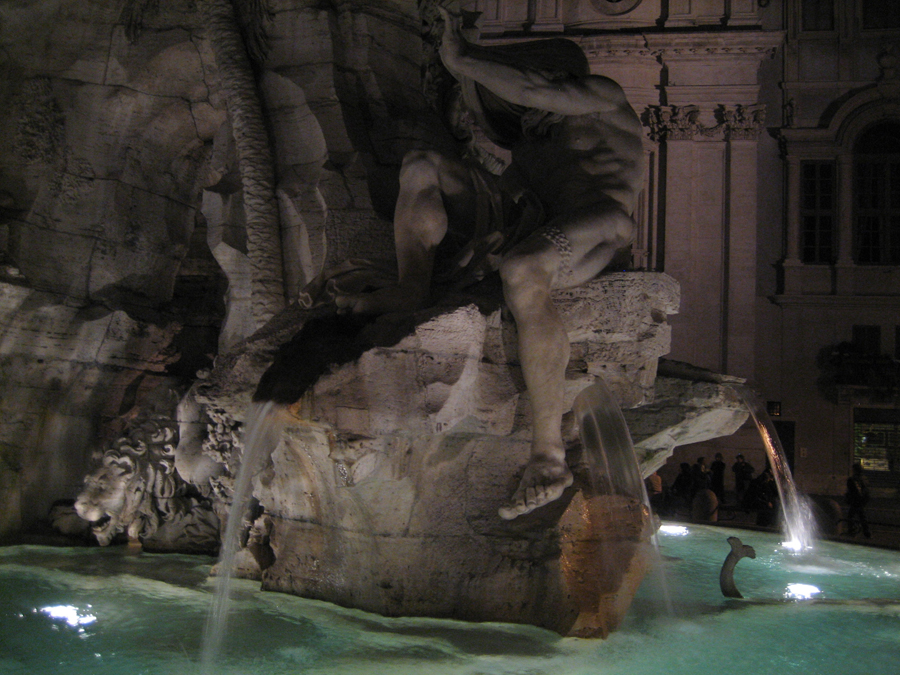 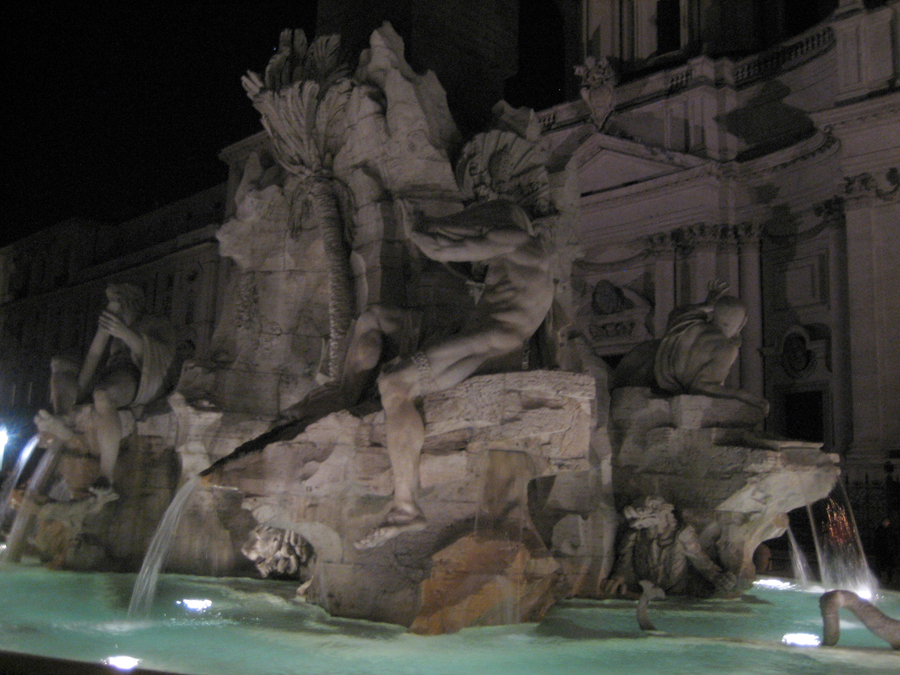 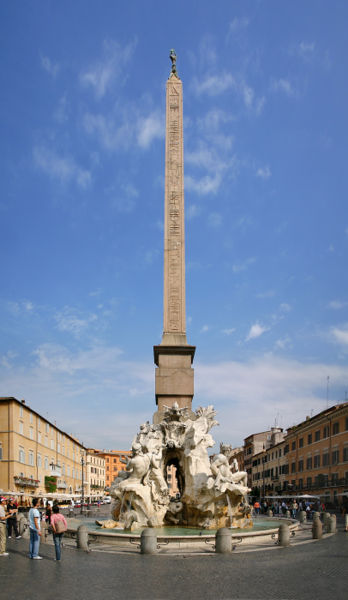