The Forum of Caesar (in Latin, Forum Iulium) is a forum which is part of the so-called Imperial Forums in Rome, where the first forum of this complex to be built.

The construction began at 54 a. C., and was finished at 29 a. C. by Augustus. While the Forum of Caesar, underwent some renovations in time of Trajan and the year after the fire 283 d. C.

Julio Cesar spent huge sums of money made in the campaign of Gaul (60 million sesterces as Cicero, according to Suetonius 100 million) to buy the land and expropriate private and demolish the buildings they occupied the area, and had also relocated to the Curia hostility and faces.

Julio Cesar sent instructed Cicero buy land that would serve to build the forum. Roman law had such power that even the emperors could go over the contracts.

At present, access is forbidden, but can have a good view of all from the Via dei Fori Imperiali.

The new building was built at the foot of the Capitoline hill, bordering the old city center. Northwest of the ancient forum of the republic. Thus was formed the Forum Iulium.

The location of the Forum of Caesar with the centers of power of ancient Rome (the Forum and the Curia), as well as symbols of authority (compared with Alexander the Great, the relationship with the gods), had a clear ideological role. The construction of temples and palaces has been used throughout history to set the authority of kings and to fill the power lines.

The official version was that the Forum of Caesar was built as an extension of the Roman Forum, as a result of population increase was insufficient to develop their roles and monumental administrative center.
But it is very likely that the ego of the late first emperor of the rule will lead to despise the idea of sharing a forum during his tenure that he had previously served the republic and built his own larger. A symbol of power.

The set was designed as a long rectangular square of 160 x 75 meters, surrounded on three sides by porches with columns and closed to the fund by the imposing temple of Venus Generatrix.

The forum had an elongated square, whose dimensions were 160 x 75 meters which had a double-gate U-shaped vessel, 16 meters wide in each of its sides. The church functioned as a covered porch on a rainy day where people gather to chat and discuss.

Regarding the porch, columns and steps which are now, is a restoration of 1934. After the gates were opened two-storey commercial premises.

At the center of the square stood the equestrian statue of Caesar, to the temple of his divine ancestor, Venus Generatrix.

The statue of the goddess is located in the apse of the church was the work of Arcesilas whose sketches as Pliny reached astronomical prices.

The Temple of Venus Genetrix (tutelary goddess of the gens Julia), was located in a dominant position within the forum. According to tradition the temple was promised by Caesar the night before the Battle of Farsalia at 48 a. C., during its civil war with Pompey.

The Temple of Venus was formed by generating a cela on a high with two basement stairs side access, and had eight Corinthian columns on the front nine and on the sides, according to the canons of períptero sine postico. At present you can still see three of these columns. Facing the square basement had two sources. Cela The internal walls were marked by six columns on each side and ended with an apse, in which he was a statue of Venus generating, but also contained other works of art, among which were some tables Timomaco of Byzantium, a golden statue of Cleopatra, and in front of the temple, a statue of the horse Caesar. The decoration of the temple that has come to this day belongs to the restoration by Trajan.

The temple had a very similar design to that of Castor and Pollux in the Roman Forum and the archetype of future built by emperors: períptero Corinthian, marble, high on the podium, not in the head gate and apse to worship the statue.

At the time of Trajan 113 d. C., after leveling the tasks necessary to build its Forum, the Temple of Venus Genetrix was rebuilt completely.

In three years 30 Corinthian columns were reconstructed with a fragment of the entablature. 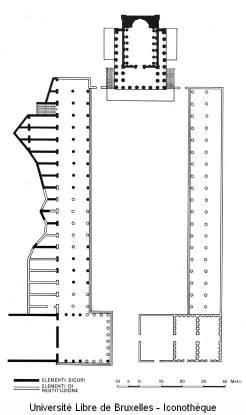 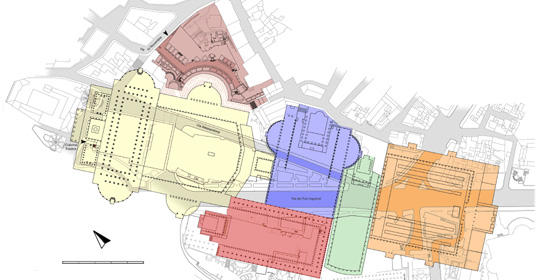 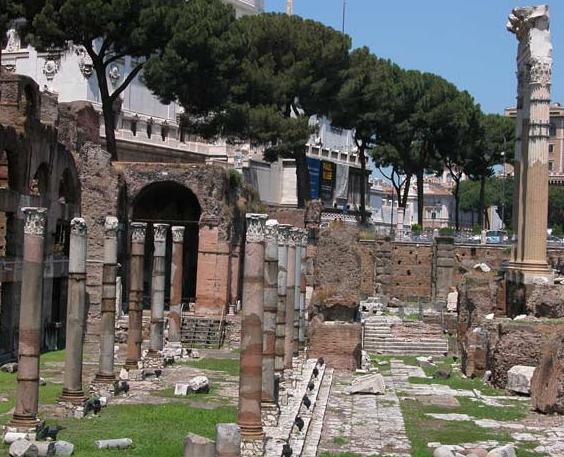 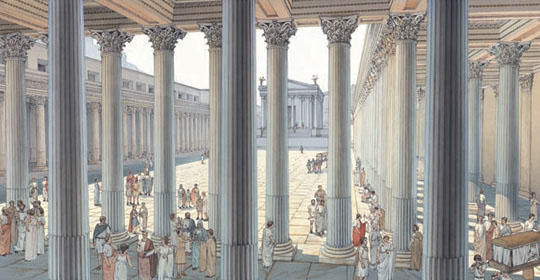 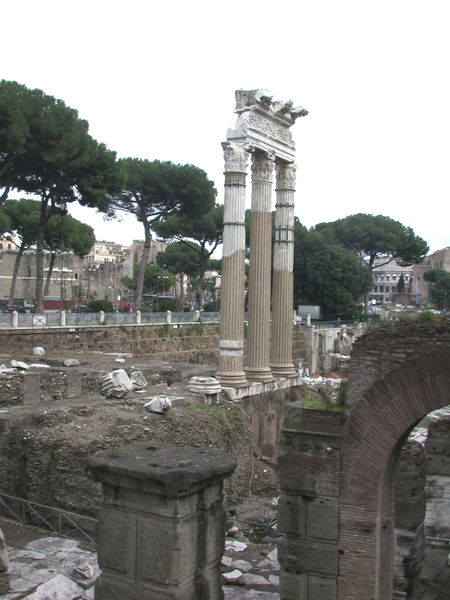 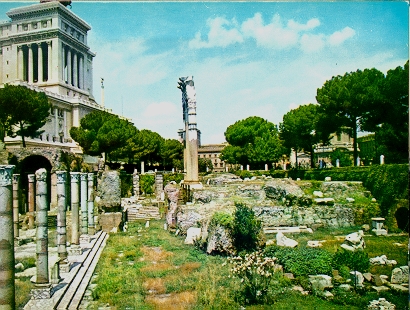 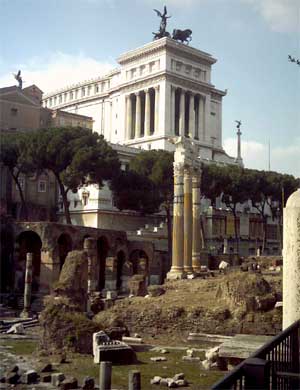