These actions on the waterfront of the town of Finisterre, in a maritime-terrestrial public domain at the crossroads between the main port activity and tourism and recreation.

Much of the intervention area was occupied by cars indiscriminately, auxiliary constructions of bars and restaurants, interfered with both by the activity and presence of a ship owners located between the front and the sea. None legibility of an area with no views, public places of residence, or clarity on their journeys.

It became necessary to order the traffic, parking and pedestrian connection traditionally occurred between the town and harbor.

Unable to intervene directly on the seafront, it was decided to use a single element that give order to the lower floors. A large box open at the front which allows a rational use of the terraces.

Plan coastal urbanization of the town

The new fish market is located in the port of the town of Finisterre, Finisterre in Galician language, whose name comes from the Latin “finis terrae”, end of the earth and end point of the Camino de Santiago in the northwest corner of the Iberian Peninsula.

The relationship with the town occurs longitudinally by a seafront promenade, and transversely, reusing and further to the stairs and ramps that come from the top of the town, extending through the square as tongues of stone.

In the port area, it was proposed to group activities: shipping, auction, guild offices and Porthos in a new building, occupying part of the existing buildings. From the beginning, the idea of a lightweight container sitting on the dock, as a package or a vessel more.

The auction raised space, as pioneering experience in Galicia, the ability to receive visitors at the same time as performing the auction activity. Separate your journey of workers becomes a goal that determines the distribution and the basic program of a conventional auction, appearing added features, such as information, materials or exposure of the control and shop.

The implementation on the site, the alignment angle between a walk and a spring, is resolved by accepting its own geometry. So the building is very clear start and end at peak, expressed mainly by two roof eaves. The first flight with a maximum of 17 meters, is present in the square and is the home to visitors.

On the final, which traces the elevation of the breakwater, the port office, administrative space and port control. Between them, the offices of the guild and the new departments of shipowners, whose ground floor is setback from the perimeter to allow indoor workspaces.

Next to a stone ramp between stranded vessels, the presence of the building on the pier tapers to nothing in a bankruptcy.

Basically there were two very simple operating schemes that do not touch: one high for visitors (ring), with start and end in the lobby, and the other defined by the linear sequence of ground-level work, with cross access loading and unloading (spine).

The entire building is modulated with a trapezoidal cutting a panel of 1.5 meters wide base. The opaque parts replacement by glass, both on the ground floor as high, defines the access and entry of light, as through a mesh. The outside ground, regardless of use that has, extends into the interior seamless, creating in the main lobby space observation differentiated by its folding ramp.

The footbridges that cross the site of exhibition and sale of fish to protect its sides sloping glass screens that function as hygiene barriers and serve as support to exhibition material. The two are joined in an exhibition that will document the information.

This will allow a tour that combines the observation of the auction activity, without interfering, and documentation and information.

Then integrated into the same volume, relocate the ten departments of owners of old fish market, at the very end, the office of Portos, controlling the port activity.

The fish market that accommodates portos owners and covers a floor area of 1,880 m2

The car park has capacity for 203 vehicles, of which 181 are public and 22 for shipowners.

The facades are covered with aluminum composite panel with anodized aluminum exterior carpentry.

Enamel and stainless steel in its structure. 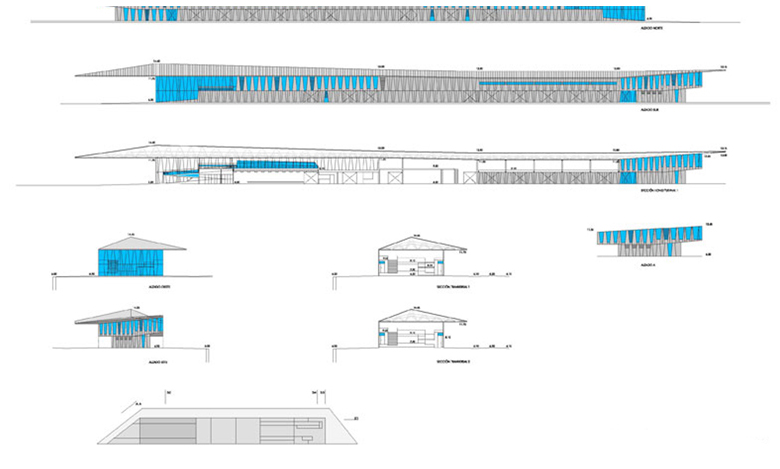 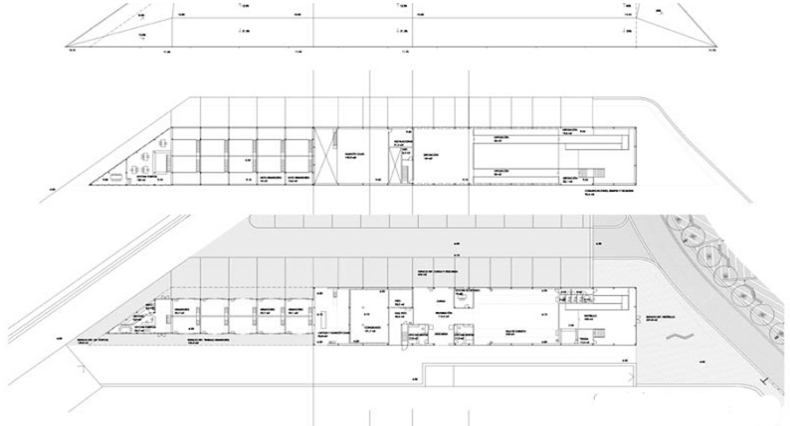 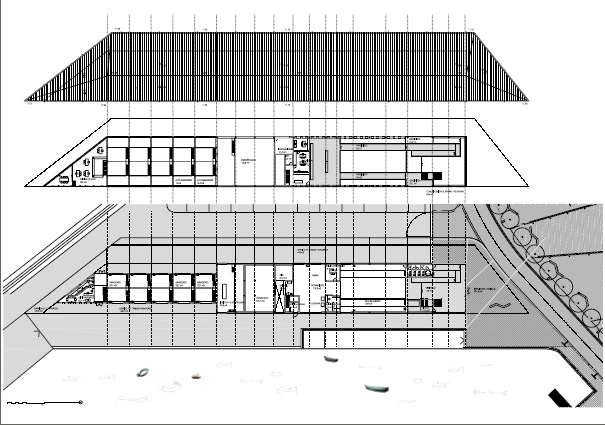 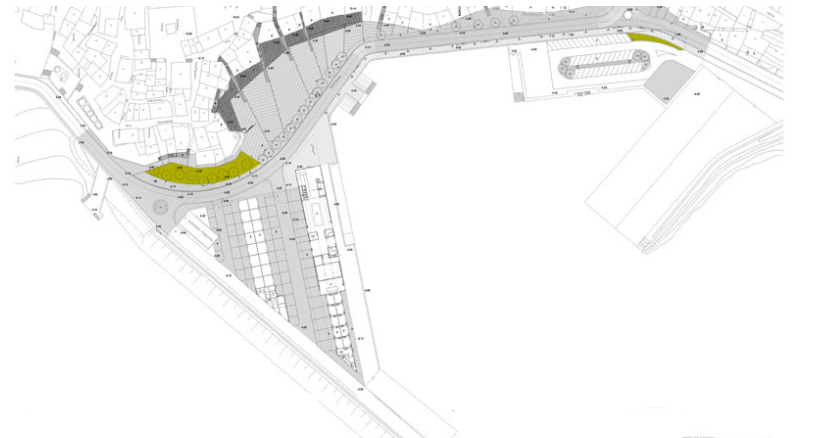 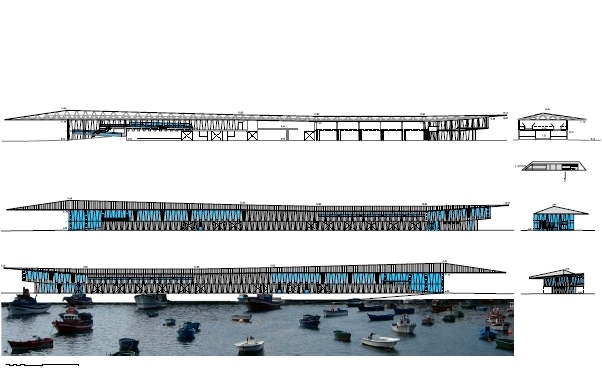 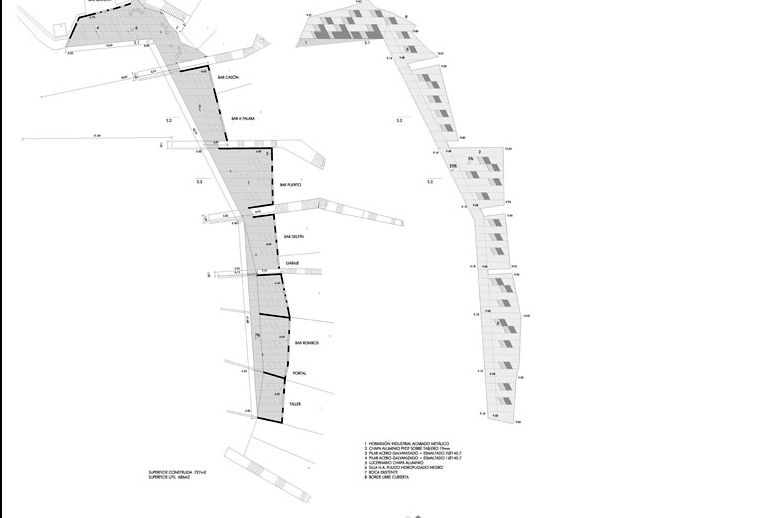 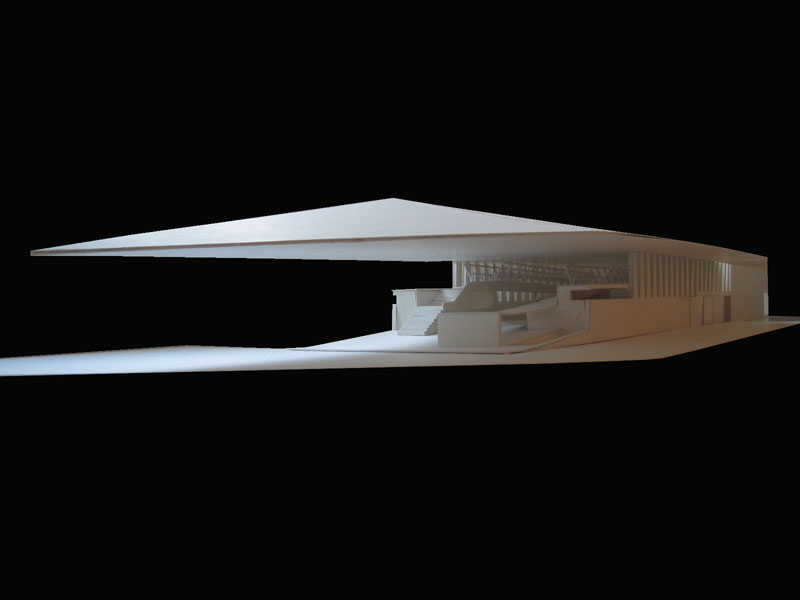 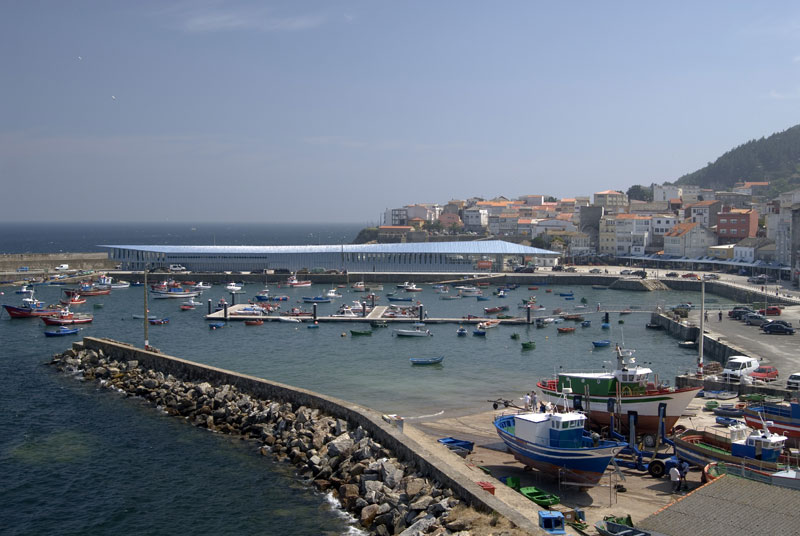 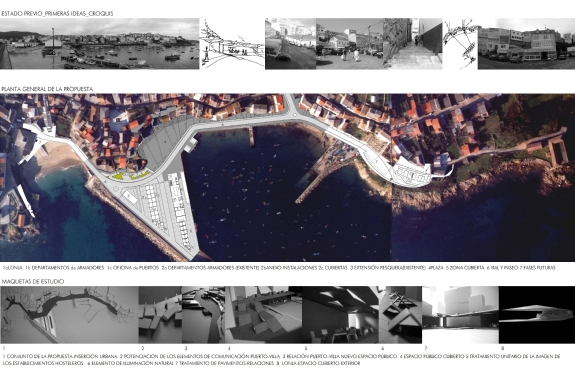 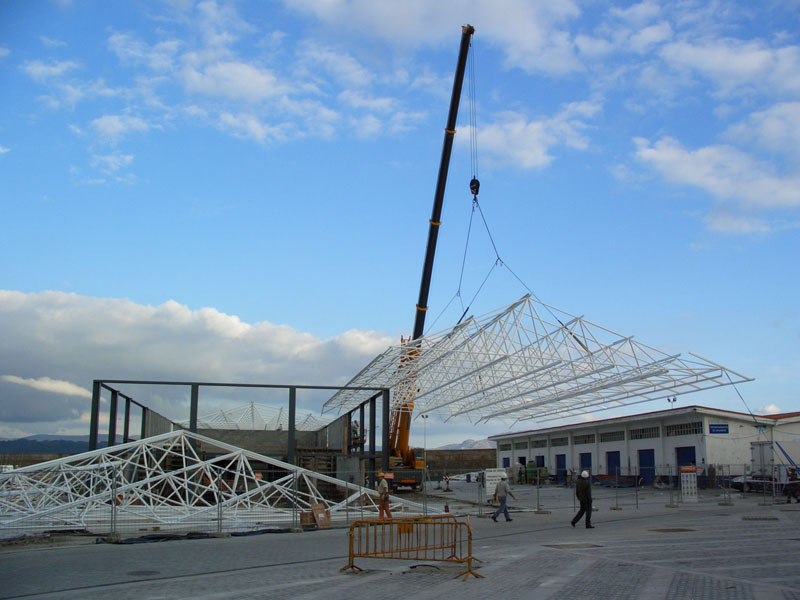 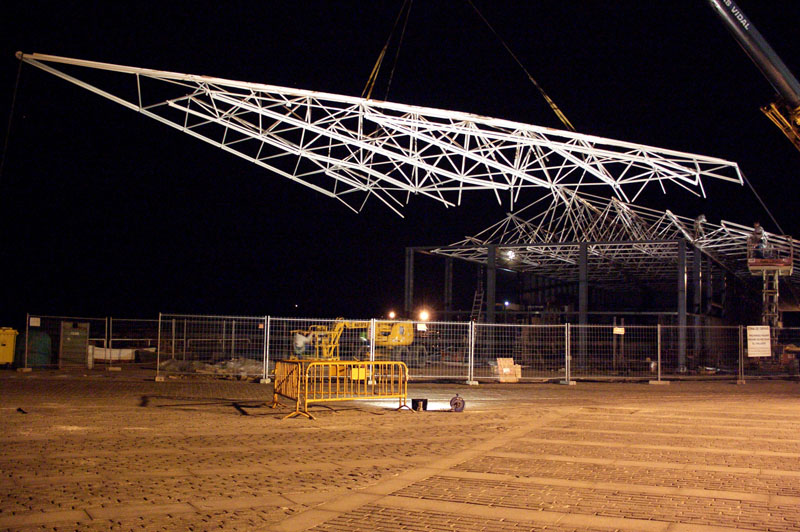 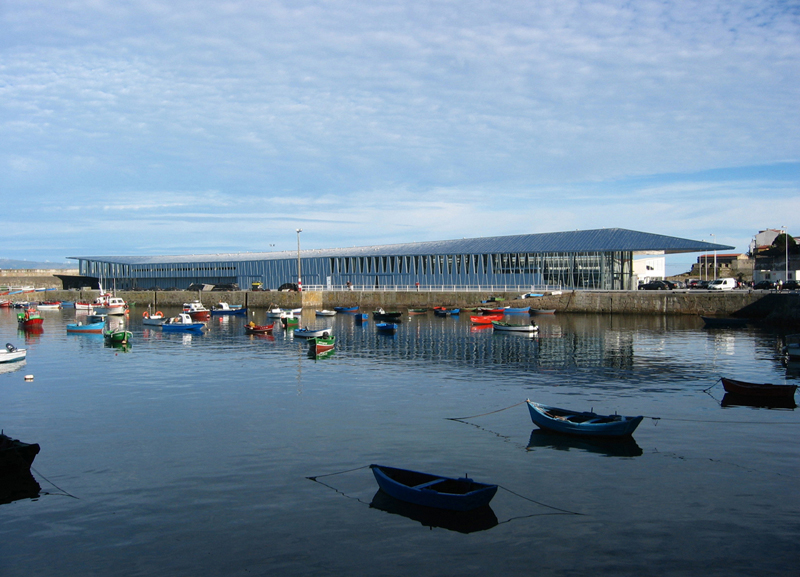 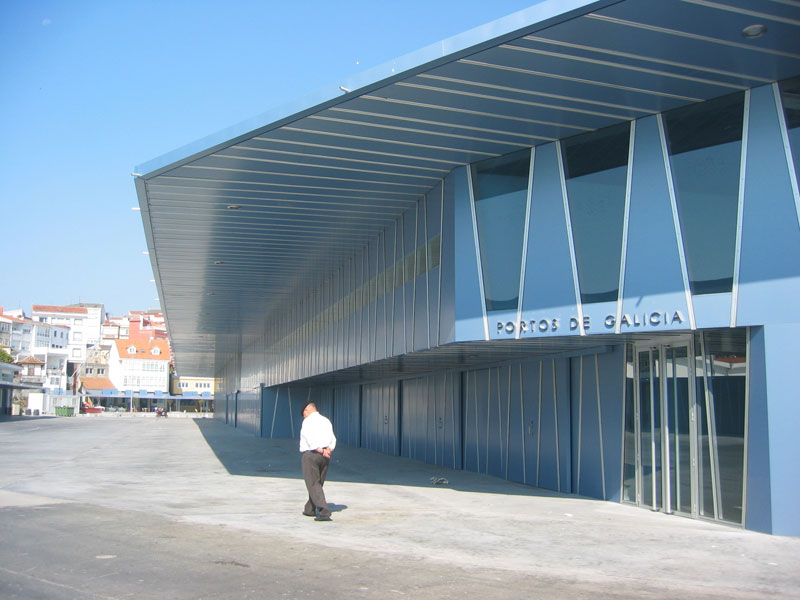 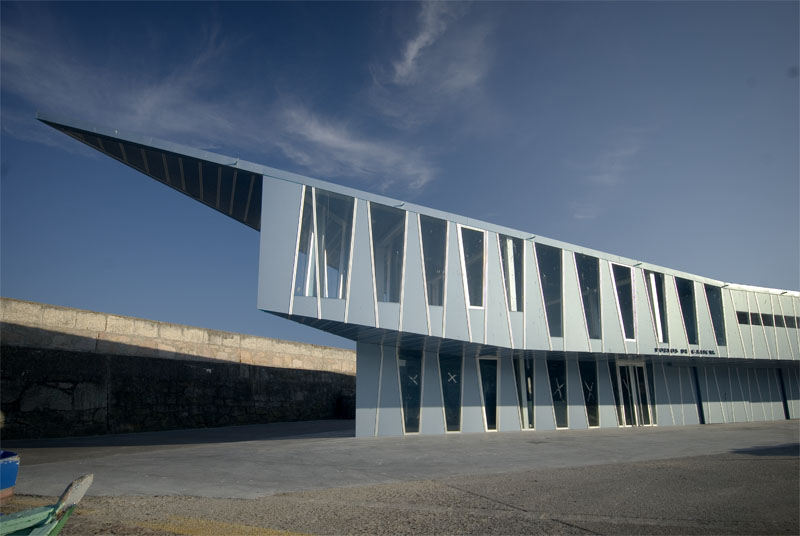 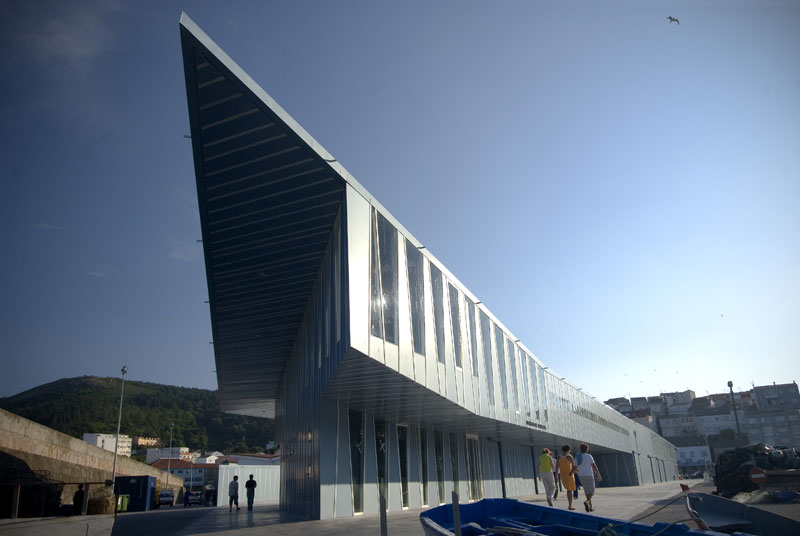 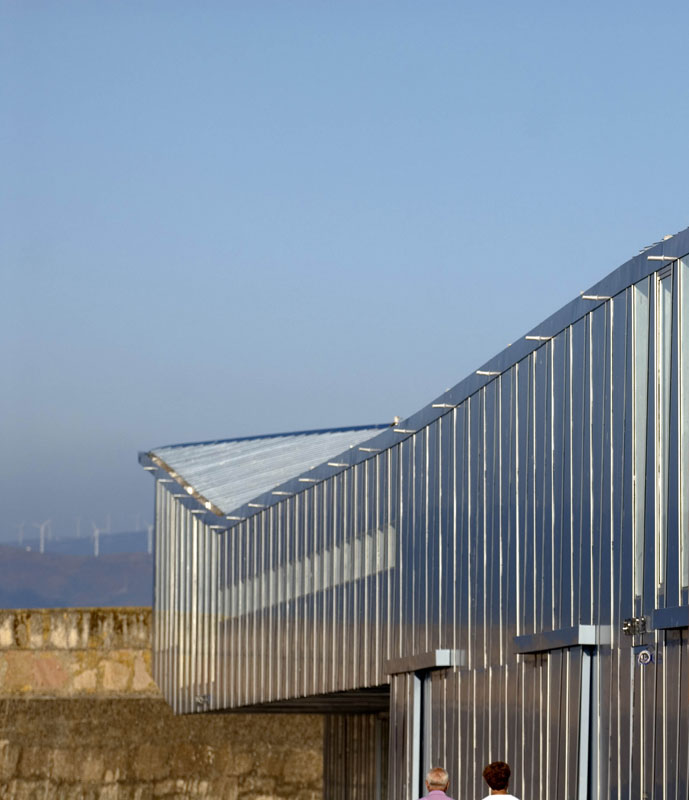 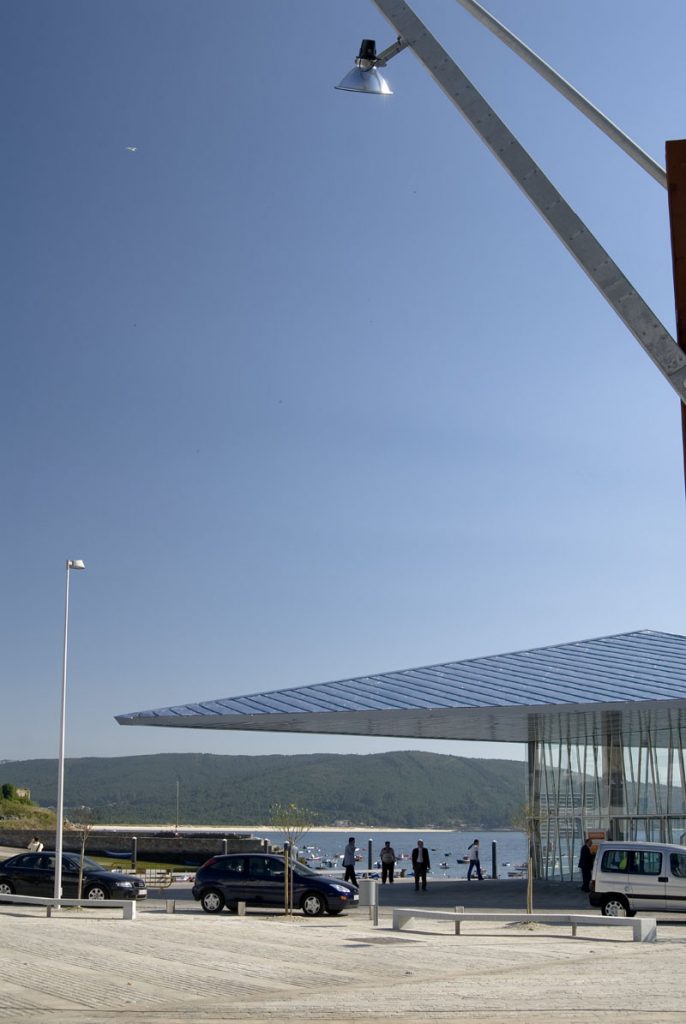 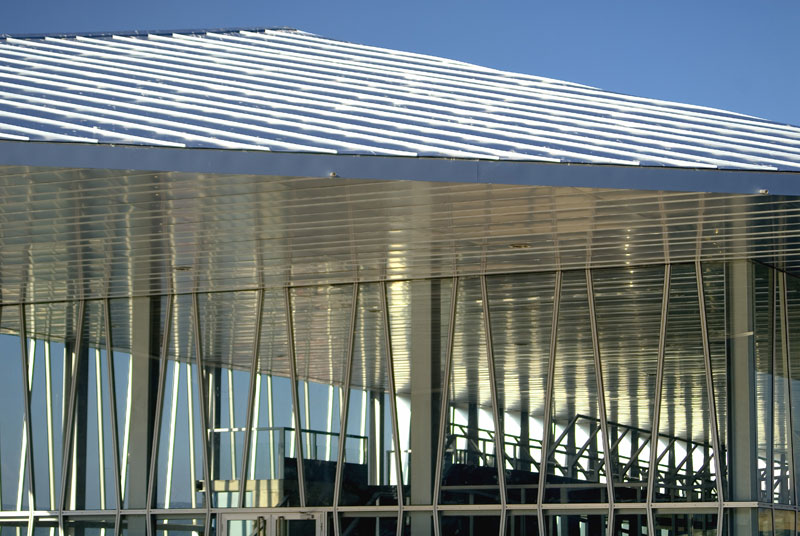 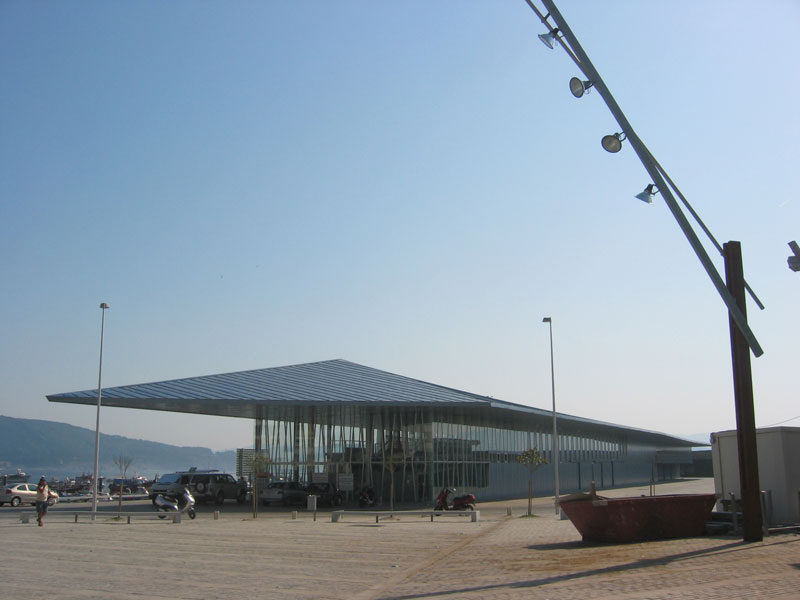 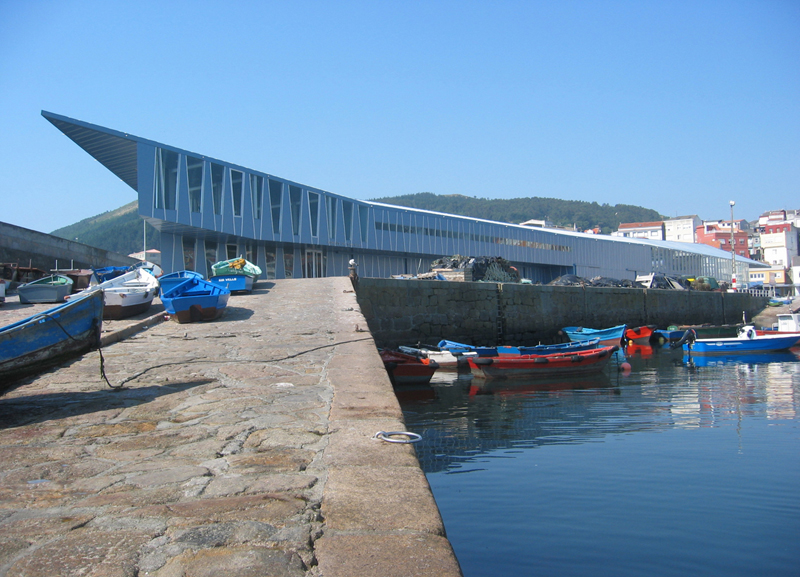 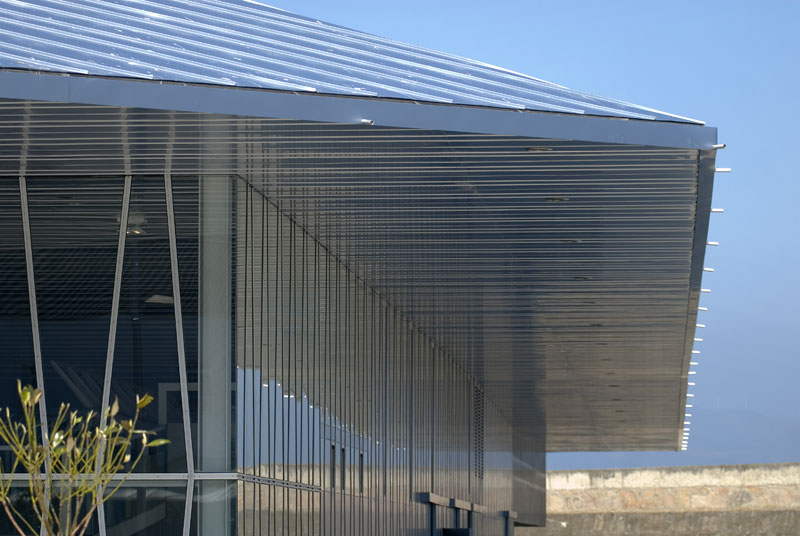 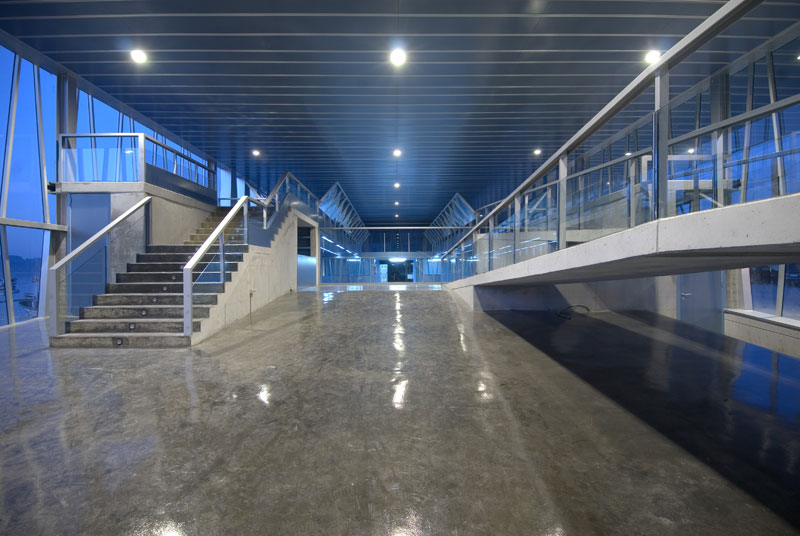 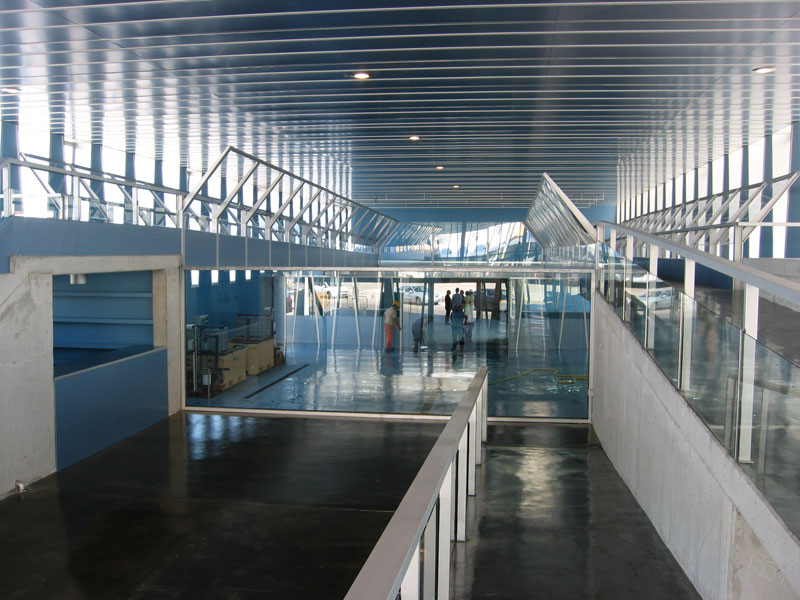 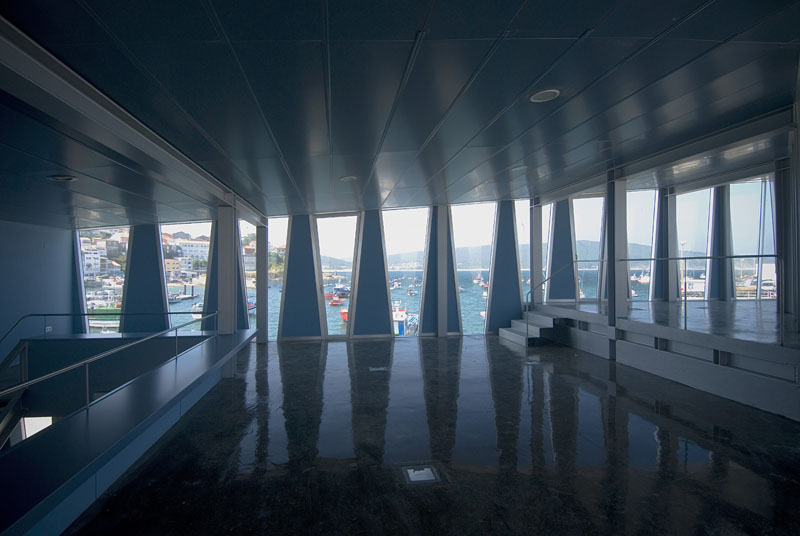 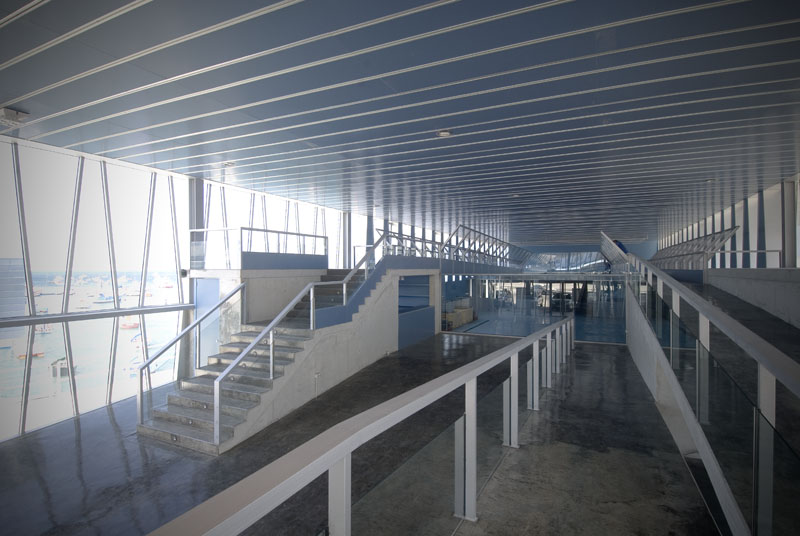 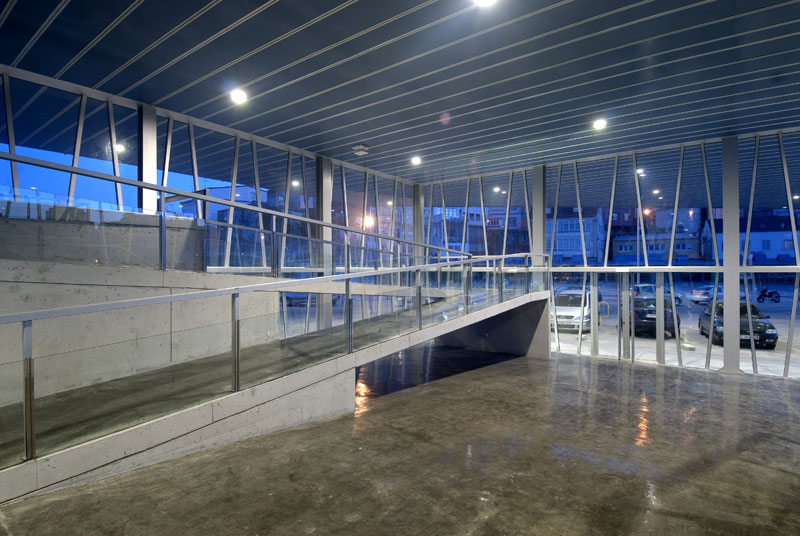 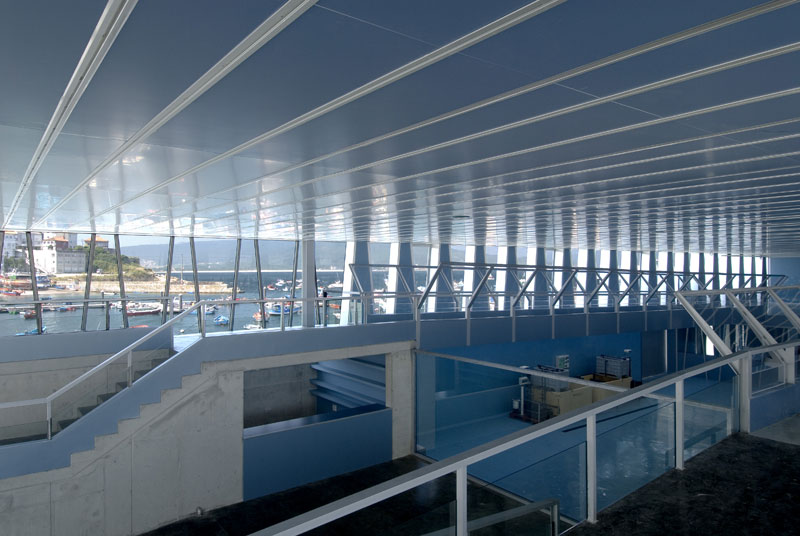