On November 30, 2004 Urban Development Committee of Catalonia approved the specific amendment of land use plan that involved the fire station of Mataró.

Under this agreement the fire station would be built on a plot of 4570 m2 and can achieve a coefficient of buildable area of 1m2 / m of land (hence 4.570m2) and a maximum height of ground floor plus 2, except the element point of the tower that could reach the number of plants that were necessary to enable the realization of the practices of firefighters.

The building regulations should be separated by 8 meters from the main street and 6 meters on the sides and bottom.

The site is located on Via Sergia Mataró, near the roundabout where it crosses the Camí del Mig. Via Sergio is an alignment approximately north-south. El Camí del Mig is a gateway to the urban center of Mataró and its direction is roughly perpendicular to the Via Sergio, ie east-west.

The trapezoidal shape of the land is almost triangular. The front that faces the Via Sergia 103m ago, which separated from the adjacent parcel, which has almost 65m i laugh bordering the measures 111m. The short side of the trapeze, which makes the round facade and Camí del Mig, is 23m.

Its topography is fairly flat with a slight slope of about 1.15% down from north to south, along the seaward direction of the laugh. In the limit of the site that opens to laugh, it forms a slope of about 3-4m high. The front of the Milky Sergia has a vertical drop of just over 1m between its ends.

The core of the population is heading east or northeast with respect to solar and a lower bound to it.

Via Sergio and the area near the Fire Station are characterized by a type of industrial buildings, storage and department stores, plus cops and small residential groups.

The adjacent parcel is occupied by the municipal nursery, which presumably will have to relocate in the near future to give up the space for facilities. It is possible that this space can be used to extend the Fire Station with the logistics hub in the remna.

As a result of the foregoing, the visuals between the north and southeast are limited and have urban character, while to the south and west are much more open and more onto a landscape plant.

On the one hand, it was necessary to place the depot so as to permit rapid exit of the trucks in an emergency and easy entry when they returned to the firehouse. On the other hand, had to provide a large open space inside the plot suitable for drill and practice and that could host a sports track. In addition, for further edification characteristics of the area, it seemed that it was appropriate to make a building aligned with the Milky Sergia of ground and first floors.

For all this, the Fire Station is organized as a large volume aligned street functionally divided into two parts: the area of garages and outbuildings.

The garage part of the garage includes fire trucks, with great headroom and greater
depth, and all annexes spaces (storage, compressor, studio, dryers quipos EPIs). The garage
is facing directly toward the street and also opens from the back toward the atio.

The area is divided units on ground floor and first floor.

The ground floor accommodates the Boards of Directors (control, offices, archives), a multipurpose classroom used
especially when there are external views (basically, colleges and institutes) and spaces for dressing rooms and associated toilets and a gym. These three groups are clearly differentiated from the lobby floor and access is directly accessible to each of them, so puedadn be used independently of each other and without interfering. At the same time, distribution of spaces by longitudinal strips allows for a dual circulation (dirty feet clean-feet) and concentrate on a single strip all wetlands.

On the ground floor are the spaces where the Fire Station staff spends most time when not practicing or output, ie the dining-living room, kitchen and bedrooms. On the side of the street lies the space of movement and access to all units and the opposite side there is a large terrace that opens into the plot.

The kitchen and dining room have an intermediate space between them, the pantry, which welcomes the personal lockers and industrial refrigerators. The dining and living room are articulated so that it is possible to differentiate. The dorms have lockers but they have other open space movement, outside the bedroom, so that whoever has to make use not disturb the sleepers. 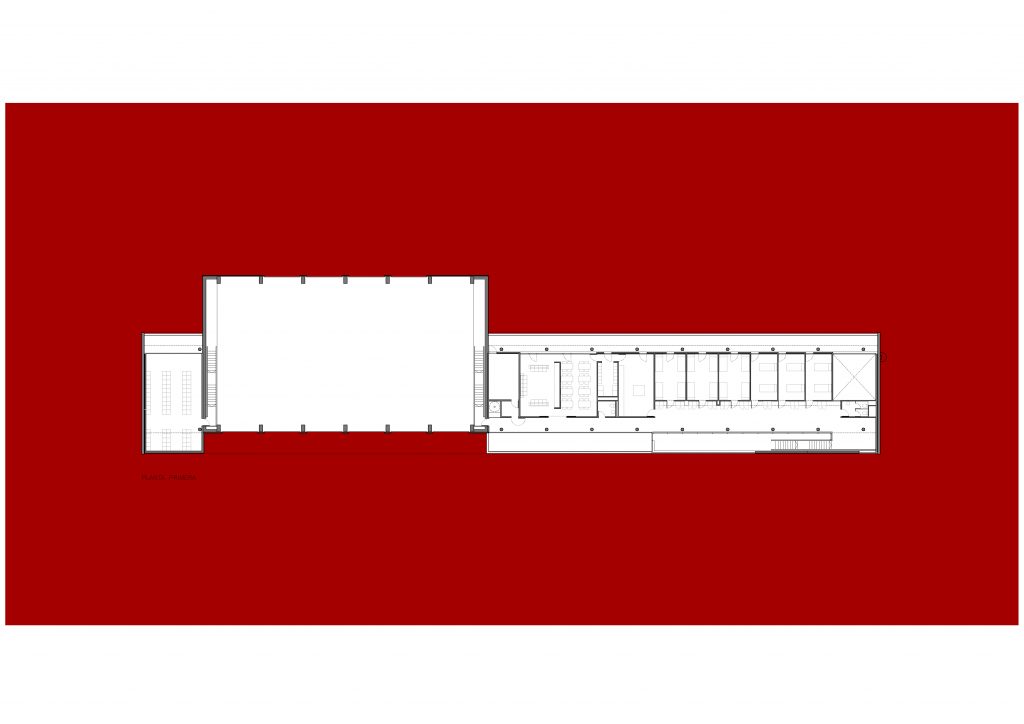 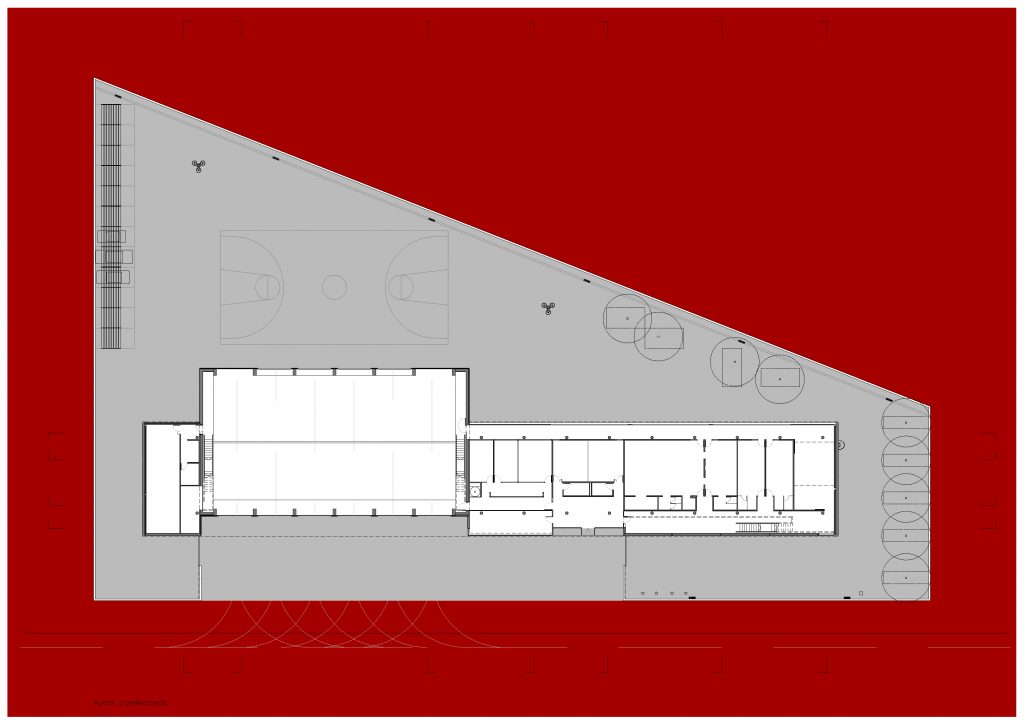 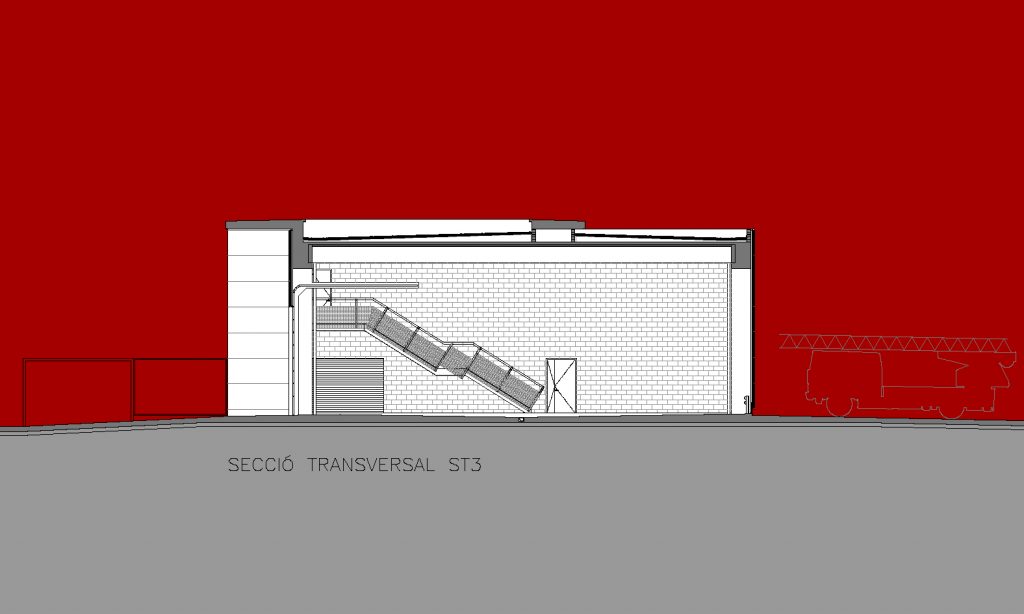 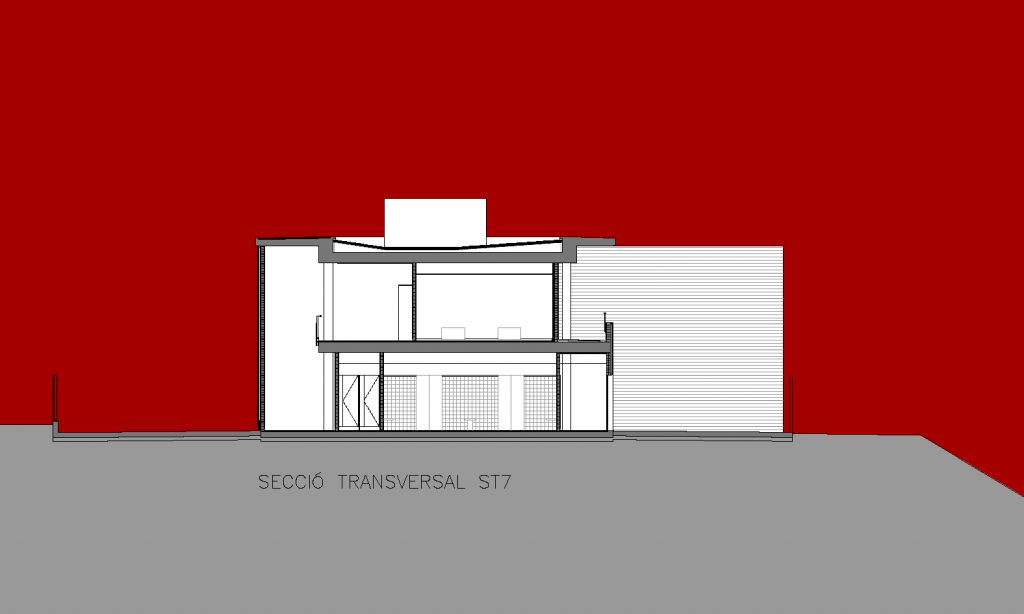 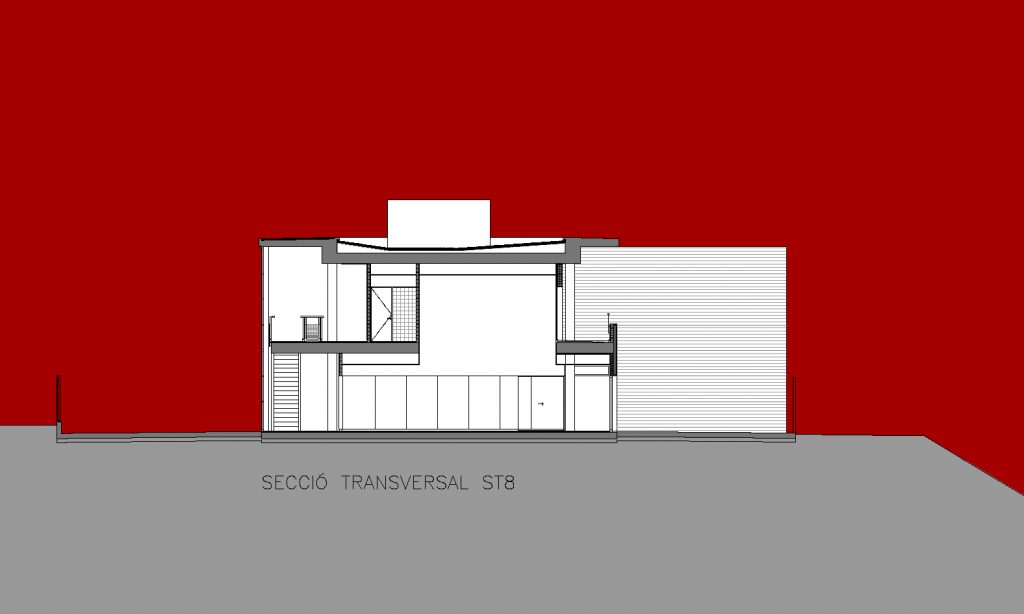 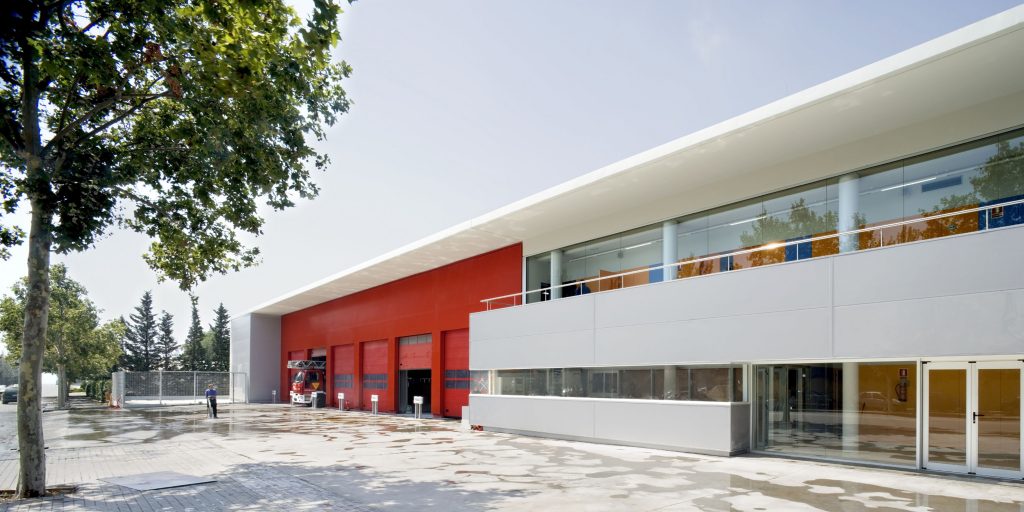 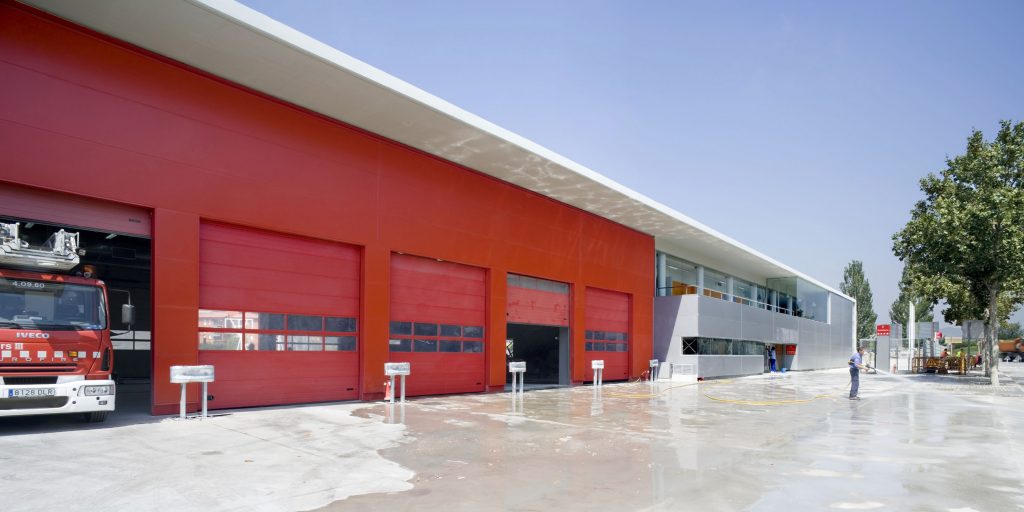 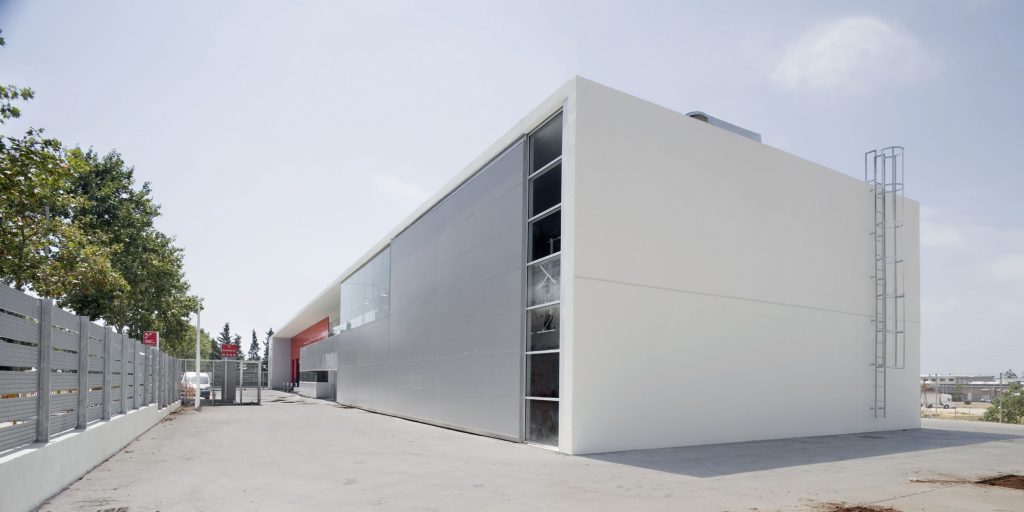 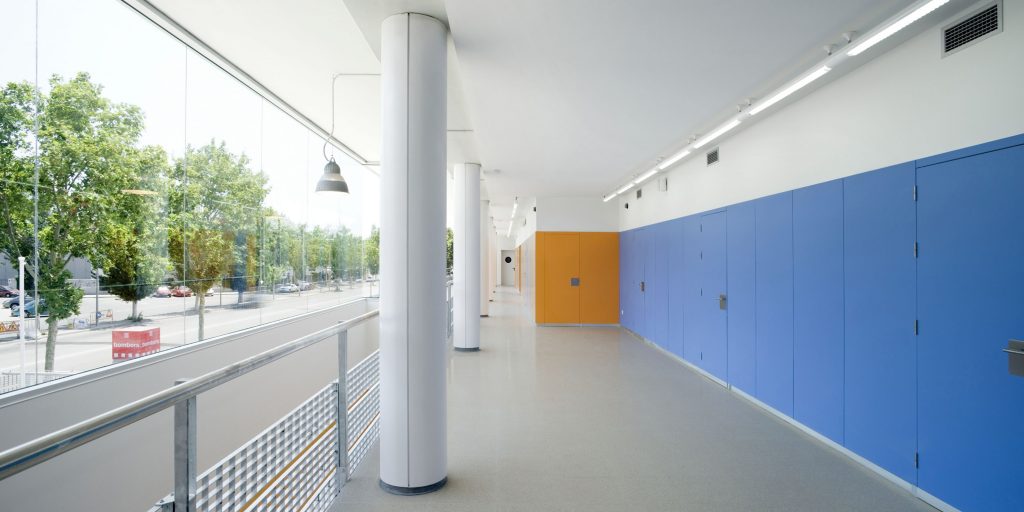 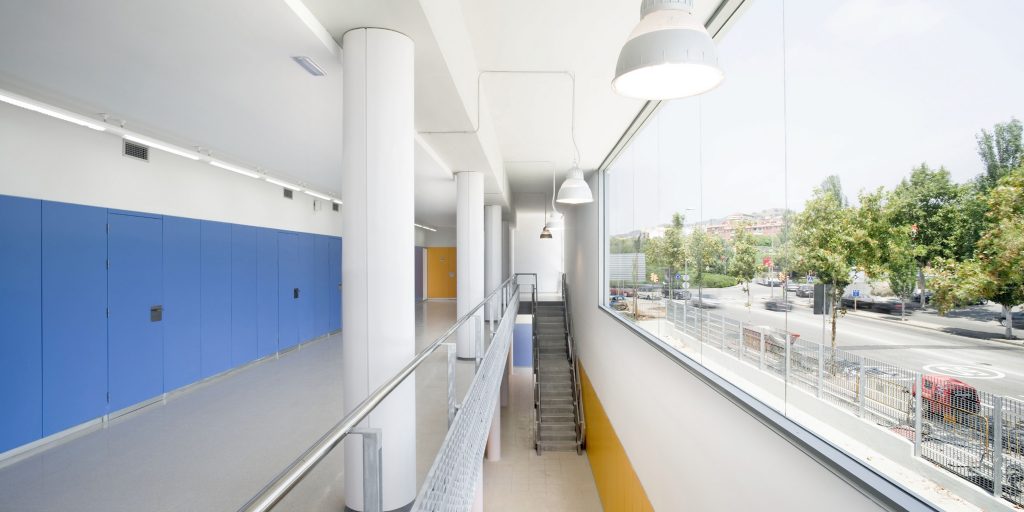 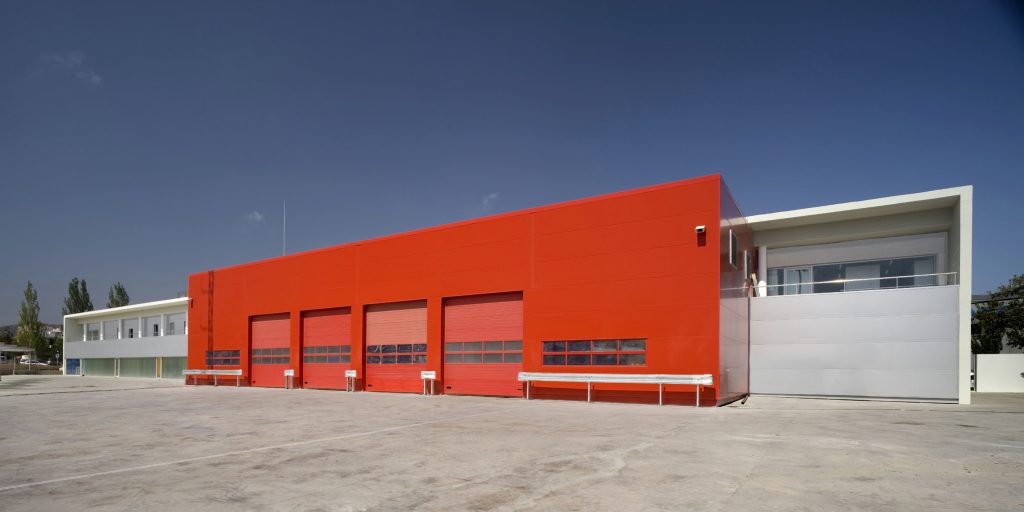 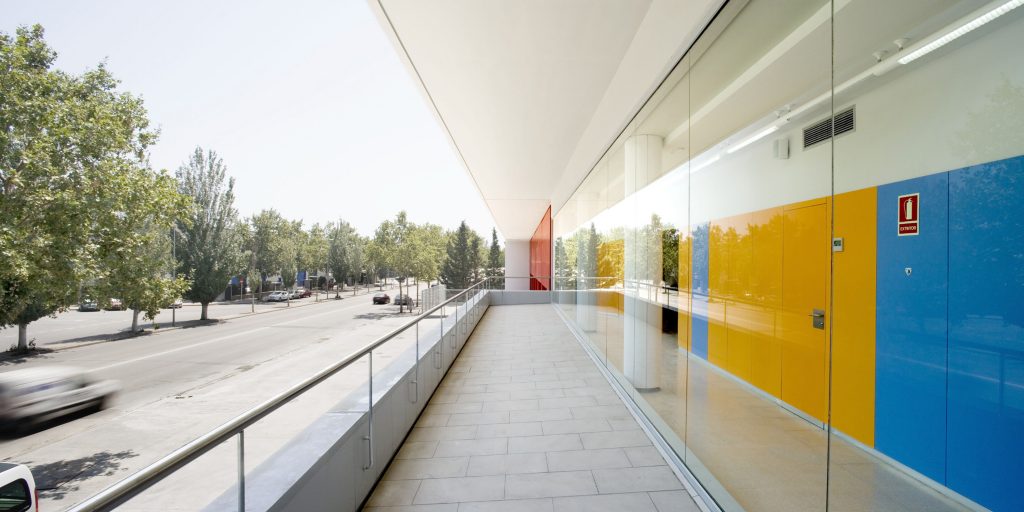 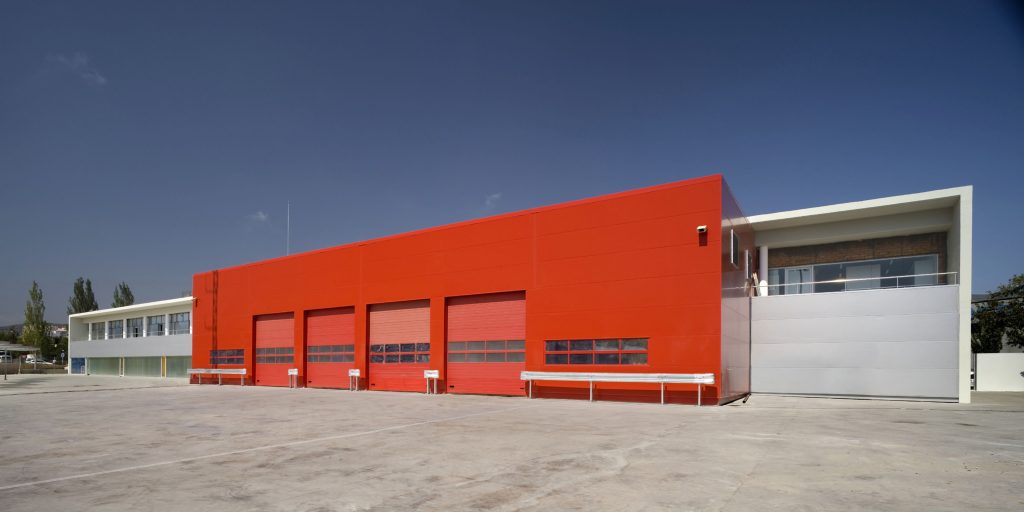 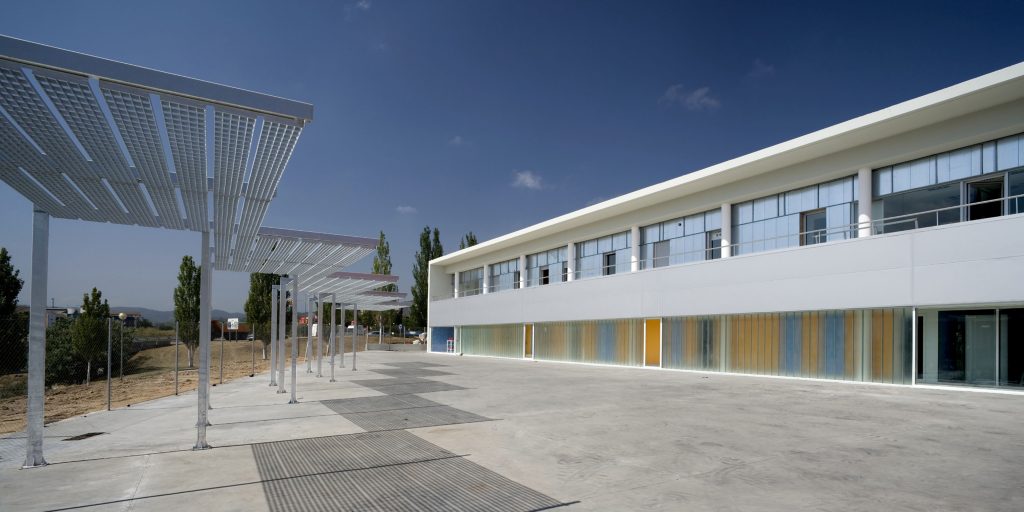 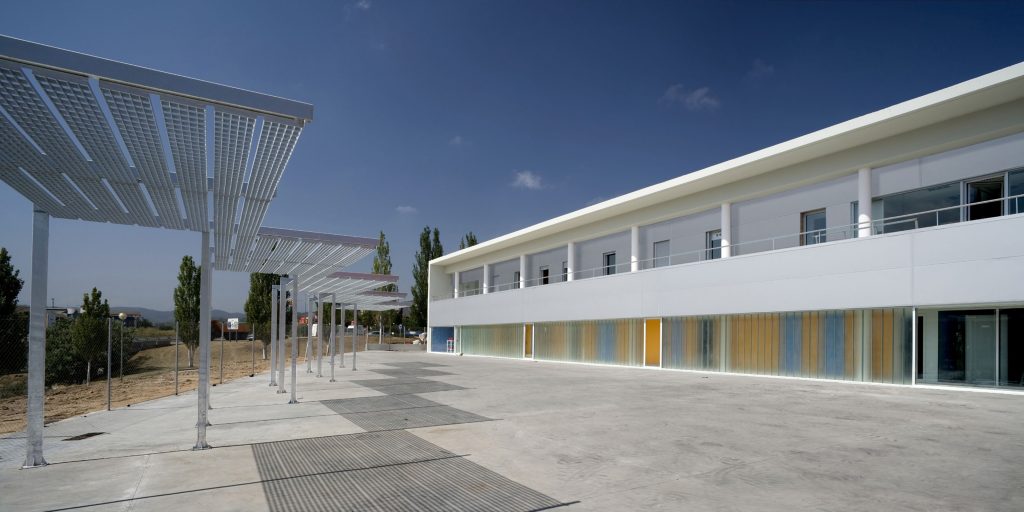 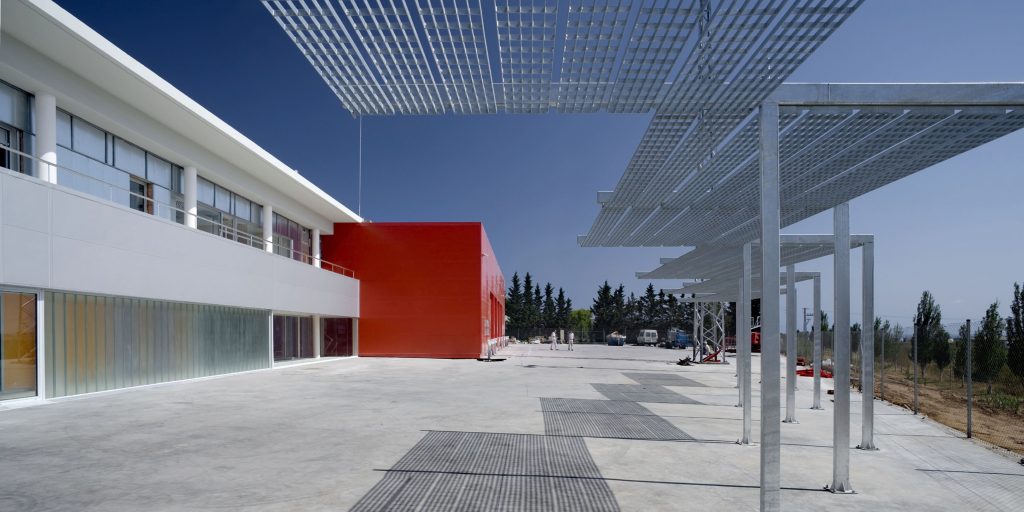 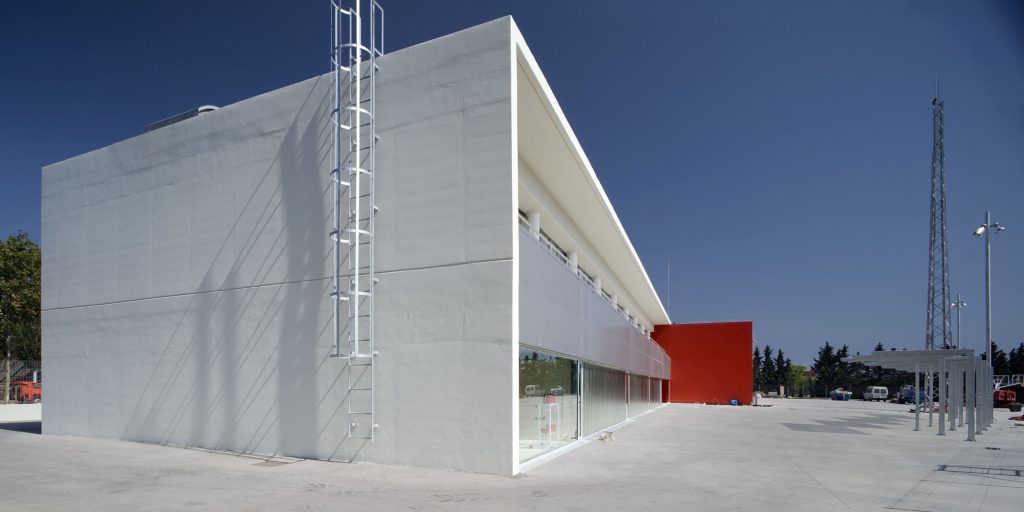 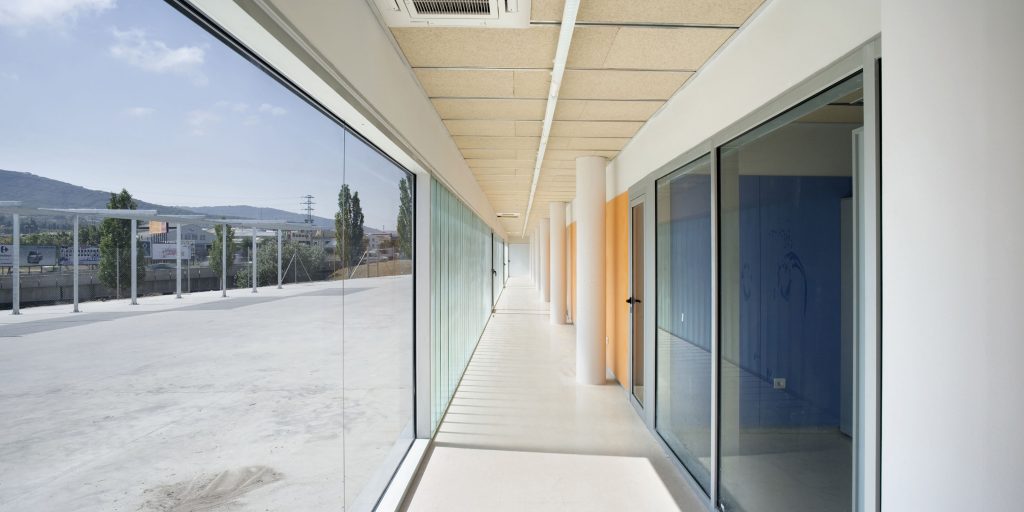 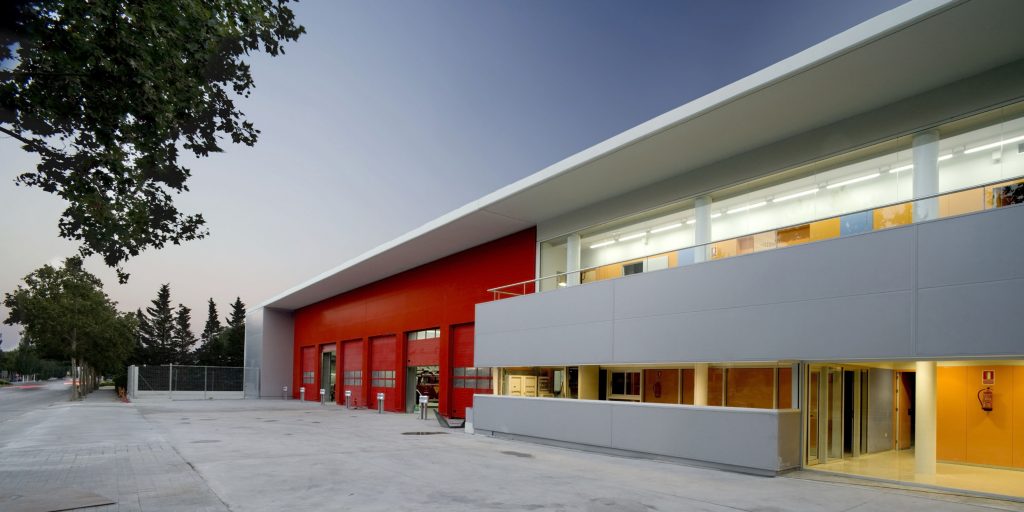 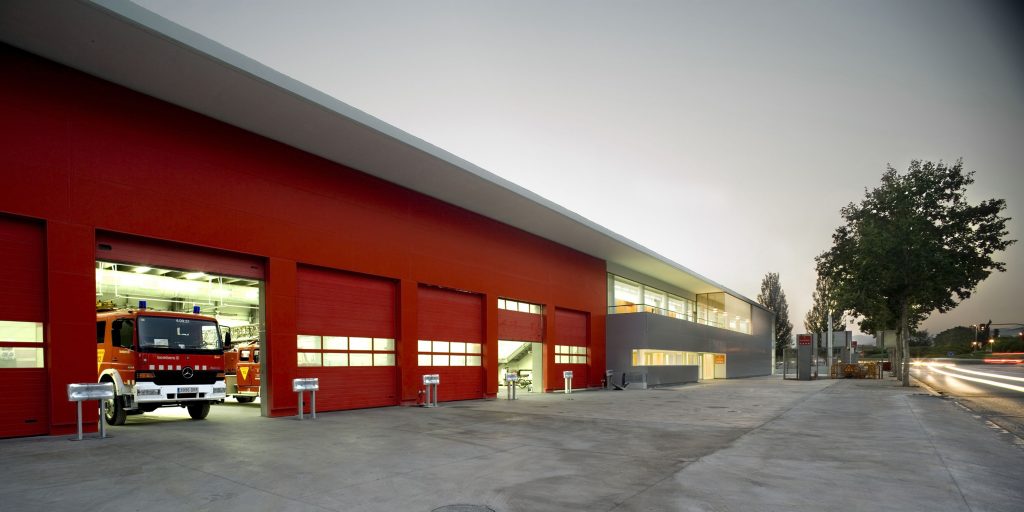 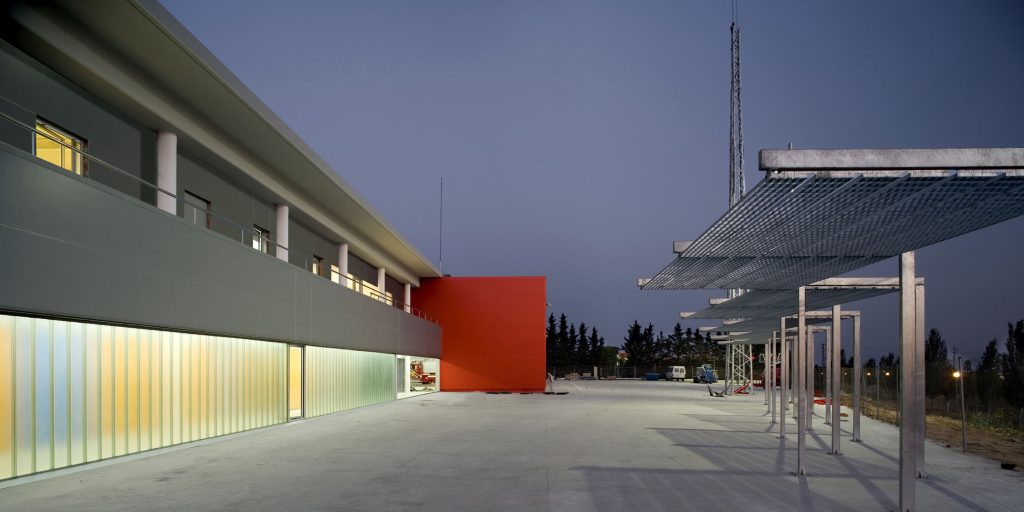 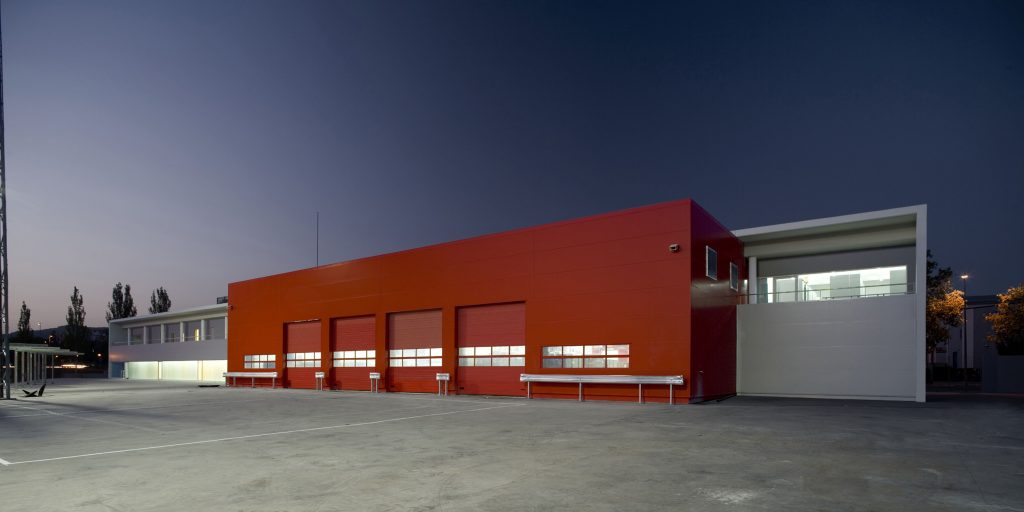