Eusebi Neck inherited his father’s extensive properties in the hills on the outskirts of Barcelona, an area known as Les Corts of Sarria. In them, the architect Joan Martorell i Montells built a large residence of Indian style, an homage to the land that enriched the family Neck before returning to their roots: Cuba and the Dominican Republic.

Eusebi Neck acquired other land surrounding their already extensive property. He intended to redistribute the gardens, at the time of French style, and erect new buildings, including a caretaker’s house on the property with stables and a riding school.

The project was entrusted to Gaudí, who, in 1883, introduced in this park romantically reorganized many Mediterranean plants, pines, eucalyptus, magnolia, cypress trees and palms, as well as two sources and a pergola. Later, the bulk of the Indian property and the house were ceded by the son of Eusebi to the Spanish Crown, which became his official residence in Barcelona, now known as the Palace of Pedralbes, with a wing dedicated to the prestigious City Museum Ceramic. The current Finca Güell includes a park, which is one of the two sources, and a pergola with an example of catenary arch.

Before the park and within the perimeter of the property are two buildings constructed by the Pavilions Gaudí called Finca Güell, corresponding to the guard house and stables with a riding school, joined by an entry for pedestrians and one for carriages. In addition, the property is still protected by the original brick wall with openings secondary, which is moving along two streets: Avenue of Pedralbes Street and George R. Collins.

The house of Guarda

On the left, staring at the residence, is the home of the guard, composed of three volumes.

The central polygonal base and home to a large room with hyperbolic dome, built using the traditional technique Catalan. With him are two buildings cubic more modest dimensions, whose ground floor rooms are covered with a small vault located between the beams.
The first floor will have some rooms with arched ceiling hyperbolic section. That section allowing develop in the central points of roof, ventilation chimneys, lined with ceramic exterior colors.

The home guard is still in a pattern layout elements sides of the same. At the junction points of the three volumes there are spaces for the entrances and staircases.

It is of great interest to the mix that gets Gaudí between the static-structural and variety of ornaments from the surface. Gaudi is confident the raw clay, a material of low cost and good thermal capacity, the role of the containment wall. Instead, it uses solid bricks of colors ranging from red to yellow, to place them on street corners and in areas of the walls more vulnerable to efforts load. In addition, the leaves citations and linking to each other with layers of mortar to engarza fragments of colored glass.
By contrast, covered the areas of raw clay with precast cement blocks, which have undulations and semicircular reliefs in the form of small spheres. The coronation of the outer walls of the house was made of solid clay bricks with very red, arranged like a merry fit gradually prominent.

With this decoration based on poor materials, Gaudi was an area of closure of the building in good heat resistance, with evocations explicit art Mudejar who achieve an effect of polychrome very much alive under the light.

On the right, looking at the facade, are the stables preceded the main entrance and service, ending in a square arena covered with a dome with a flashlight.

The second building is also a piece of masonry mixed as the home guard, made expressly for masons came from the province of Lleida. The stables, now converted into the library of the Royal Gaudí Chair, a local form of a rectangular, with a sequence of arcs cross on the roof. The latter are linked together with small parabolic vaults that allow large windows opening on two long walls.

La Finca Güell is well known for the extraordinary cancellation of wrought iron entrance to the carriages.

The pedestrian gate is canceled in a parabolic arc, highlighted by the identical form of the brick wall that delimits supported by a high stone plinth. Gaudi made a sculptural masterpiece of wrought iron, the material most familiar to him, and, like much of his work in iron, and conducted in the workshop of blacksmith Joan onos.

The dragon and the golden apple tree that crown the column where the anchor was canceled convert Flags of the Finca Güell in a suggestive metaphor of the architectural Greek myth of Heracles and stealing the golden apples in the garden of the Hesperides.

This myth appears narrated in the epic poem L’Atlantis, written by Mosen Jacint Verdaguer, poet and friend of Guell Gaudi. The poem, dedicated to the Marquis de Comillas, the priest who was spiritual leader, is a loa to the mythological origins and the great future of the Catalan people. 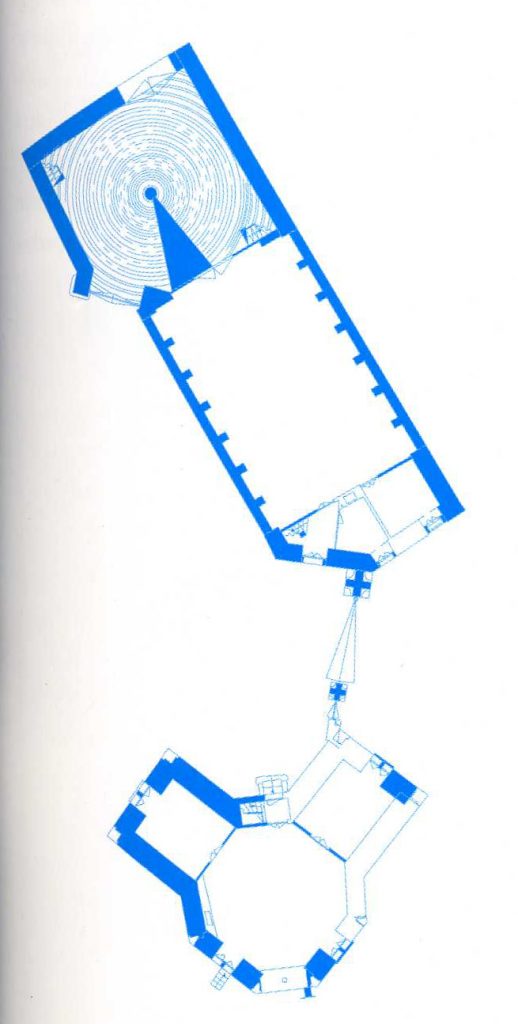 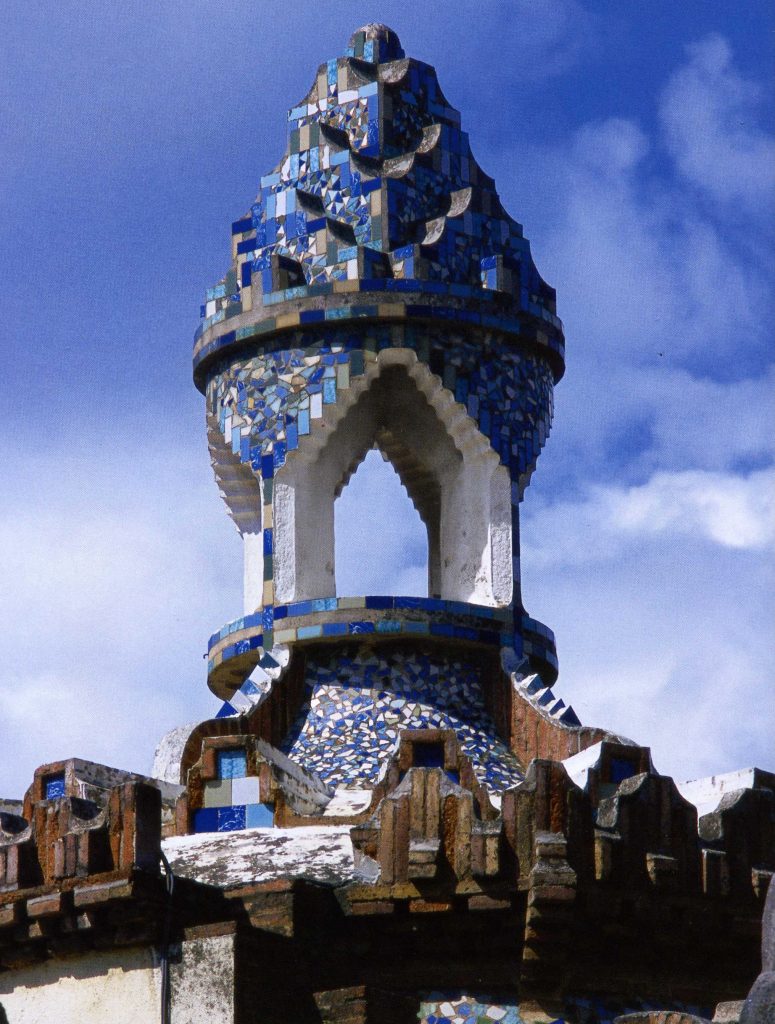 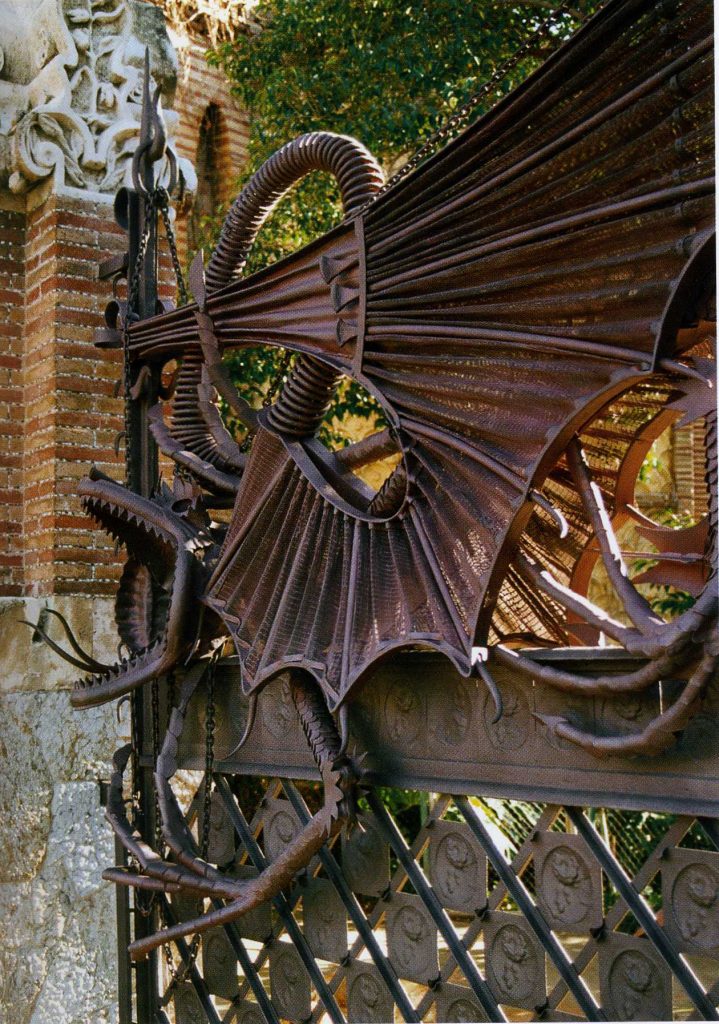 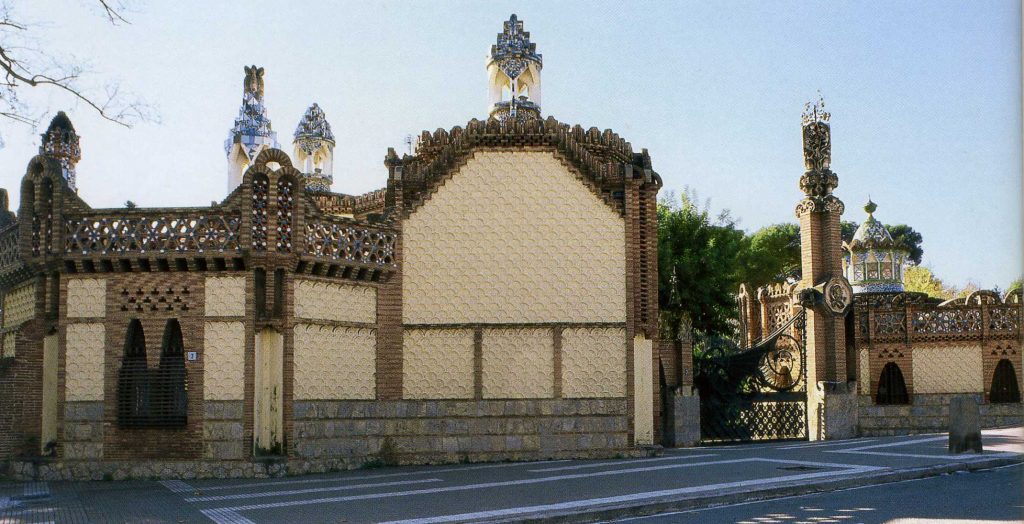 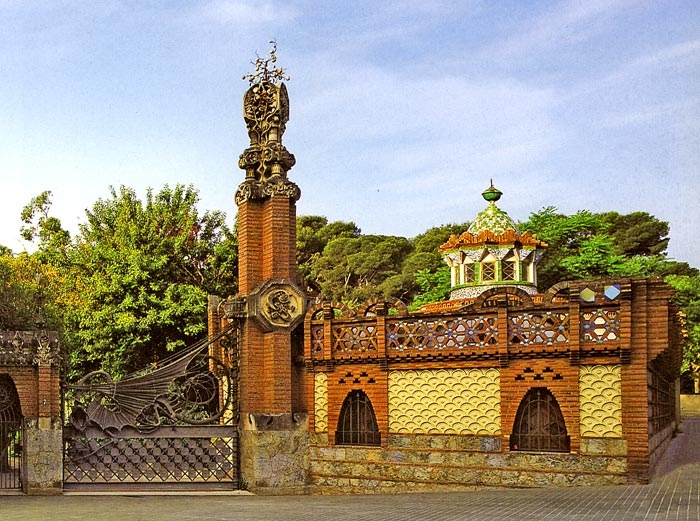