Falkirk wheell combines art engineering to marine architecture. After four years, between planning and construction, was terminated this sculpture resulting from the collaboration of some of the most brilliant architects and engineers in the UK.
The Falkirk Wheel, can carry up to eight ships at a time between the basins of the Forth & Clyde channels and the new aqueduct in the Union Canal. This boat lift machine was diseñanda and built by Butterley Ltd, supported by Tony Gee & Partners Engineers.

When was interrupted the old connection between the two Scottish channels to a smart solution to reconnect again resorted. Once linked to a series of locks, a giant rotating wheel to lift and down saving boats 24 meters difference between a channel and another was built.

The original concept of a wheel to act as a boat lift back to the nineteenth century Europe in 1875, when the boat lift Anderton, Cheshire, northwest constructed England, but was not returned to seriously considered until 1994 when the British Waterways considered the idea as a solution to Falkirk. Some architects of Dundee conjunction with Nicoll Russell Studios, presented the first design for Millennium Wheel, as it is also known, with which the start was given to the foundation of the Millennium Commission for raising the funds to finance the project, responsible for planning and site selection being, but later the project was developed and completed by others.

The play, directed by British Waterways, combines international experience and work together contractor Morrison-Bachy-Soletanche, with specialists from Ove Arup Consultants, Butterley Engineering engineers and architects RMJM based in Scotland.

This boat lift is located in a natural amphitheater on the outskirts of Falkirk, Scotland and was built to reconnect the Forth & Clyde and Union canals Canal between Glasgow and Edinburgh.

The town of Falkirk is located in central Scotland, Edinburgh northwest and northeast of Glasgow. Their settlement at the intersection of the Forth & Clyde and Union canals Canal was crucial for growth as a center of heavy industry during the Industrial Revolution. In the eighteenth and nineteenth centuries highlighted in the iron and steel. In recent years, most of the heavy industrial base of Falkirk has disappeared, becoming increasingly service-oriented city.

The original project was reevaludado to create a functional elevator that could raise and lower ships quickly while reconnecting the two historic canals in the region, with a structure worthy of the New Millennium. 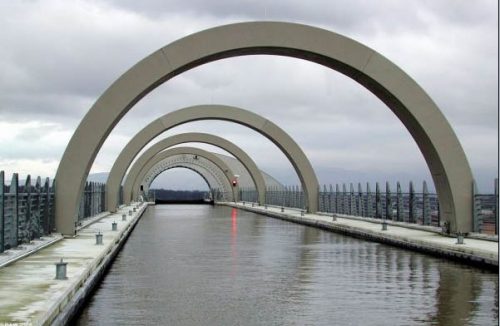 The numerous ideas and concepts were, from the lamination to the tilt axis of the tanks. A giant seesaw with monorails and complex structures counterweight. The end result was the Falkirk Wheel The Falkirk Wheel, which combines functionality and design, creating a stunning piece of sculptural work that works, in part, following the principle of Archimedes: “floating objects displace their own weight in water”

For the only way its structure is said to have been inspired by various sources, both manmade and natural. Including a spear Celta dual head, turning a large propeller belonging to a ship built in the shipyards of Clyde, the ribs of a whale or the backbone of a great fish. The union of the channels, resembles a “backbone” bella resulting deep and repetitive way the aqueduct, whose arches add to the great structure, forming a complete circle with reflection thereof in the channel, extending the feeling tunnel.

In addition to the wheel, the project includes construction of a new section of canal, two aqueducts, three blocks, a tunnel, a bridge for rail and a basin. Construction began in the summer of 2000 and ended in 2002 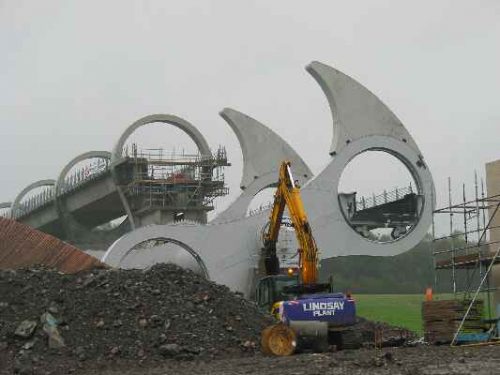 The different parts of the Falkirk Wheel were manufactured in the workshops of the Steelworks Butterley in Ripley, including raising test critical components to verify the interfaces before being sent to the place where he was to be mounted. In the summer of 2001 the structure was dismantled in workshops and transported in 35 trucks to Falkirk.

20 subsets were sent before his elevation using conventional heavy cranes worked individually and together, lifting heavy parts into five major sections. A team carefully assembled 1,200 tons of steel, fitting the pieces accurately, allowing only 10 mm spacing between them to ensure that the final fit was perfect. All connections were hydrophilic special flanges with gaskets to prevent loss of water in the drawers.

To communicate the two channels proceeded to build a diversion from the highest of them, the Union Canal. Such a difference, after leveling down 2 dams, through a tunnel of 168 meters and a small concrete channel of 104 meters that leads directly to one of the gondolas transshipment Falkirk Wheel.

Structure 28m high and 35m long, weighs about 1800 tons and generally 6.5 carries two wide drawers each with about 250,000 liters. The wheel rotates through a central axis, driven by hydraulic motors located in one of the support shaft. The wheel base is located a dry container, which allows no direct contact between the water.

These drawers always have the same weight bearing or not their combined capacity of 600 tonnes (590 LT; 660 ST) with floating barge canal, according to the displacement principle Archimedes’ floating objects displace their own weight in water, “so when the boat comes in, the amount of water coming out of the drawer weighs exactly the same as the boat. This principle maintains the balance of the wheel and can, despite its enormous mass, spin 180 degrees in five and a half minutes using very little power. Need only 22.5 kilowatts (30.2 hp) to turn their hydraulic motors, which consume 1.5 (5.4 MJ) kilowatts in four minutes. Each drawer accommodates two boats, river boats passengers entering them through dams end.

The Falkirk Wheel is at the end of a reinforced concrete aqueduct connecting through the tunnel Roughcastle and a double enclosed stairway, with Union Canal. Vessels entering the gondola or top drawer of the Wheel are lowered, along with the water in which they float to the lower basin. At the same time, a weight is lifted in the other nacelle. The boat coming into the gondola, displaces a volume of water exactly proportional to the final mix of “ship more water” balance the original total mass.

Each drawer operates on small gears that fit into a curved rail and attached to the inside edge of the opening of each arm. In theory this should be sufficient to ensure that it always remains horizontal, but any rubbing or sudden movement could cause the nacelle tilt. To prevent this from happening and ensure that the boats and the water always remain perfectly level throughout the cycle, a series of gears linked act as a backup.
At each end hidden behind the arm closest to the aqueduct, two gears 8 m diameter that binds to each end of the drawer. A third piece of the same size is located in the center connected to the fixed vertical position. Two smaller gears are placed in the intermediate spaces, which teeth fit into the adjacent part and push against each other, revolving around the fixed central part.

Given the precise adjustment of the gondolas and this simple but clever system teeth wheel consumes little energy to move. In fact, this is a group of ten hydraulic motors located in the center column provides only 1.5 kW of electricity whenever it turns.