Designed in 1972, when Rossi Segrate had only built the square in 1965 and Gallaratese housing block in 1970, the school in Fagnano Olona is considered one of the first works of the architect.

In this work the permanence of historical typologies as monuments in which historical memory and collective rituals of a culture condenses shown.
The works of this architect constantly allude to the story, everything is designed from its historical concerns, regardless of the peculiarities of the implementation or the characteristics of the users.

Teaching elementary school it is located in Fagnano Olona, ​​a small town 40 km northwest of Milan, in the province of Varese, in Lombardy, Italy.

This school building is built on a former factory and respects any of its elements making them their identifying image.
The central concept of this project is to make a small city, this city is developed around a central plaza with two levels. This square is done as a tiered theater, theater in this open political demonstrations, lectures and meetings are held. The cylinder is the school library, a library to serve the neighborhood. 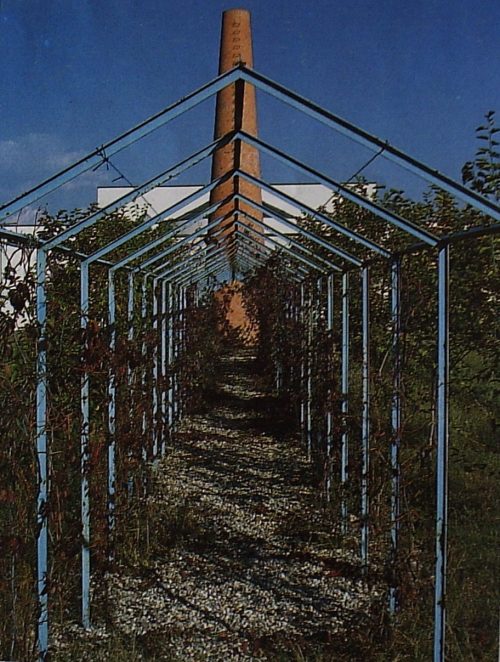 School Fagnano Olona is defined by the shape of your yard and the axial organization. The elevation is pierced with large square openings established linearly with the inner wall, thereby articulating the shadow falling on the outer surface.

The main entrance is under a large clock which together with the adjacent fireplace, cone-shaped and made of brick, like the old factories, recovered to school the importance of industrial landscape that surrounds it.

The fireplace in the driving school has a symbolic value, together with the circular library and courtyard with stairs building, creates a theatrical atmosphere reminiscent of certain paintings of De Chirico and Sironi. Also marks the entrance and the main shaft of the school, organized from northeast to southwest between an auditorium and a linear pergola.
Inside the courtyard, wide steps leading to the gym double height in the northeast, from where you can see the cylindrical library with its glass roof. The courtyard is surrounded by galleries on two levels containing twenty classrooms (on two floors), staff facilities and a dining area.

The construction respects the central axis of symmetry, and reinforced by the location of the circular library building in the middle of the central courtyard with two levels and serving the neighborhood.
In the first body are local address, medical and dining. Immediately after classrooms, twenty, which are developed through a central axis by series and oriented east-southeast rigorously are. 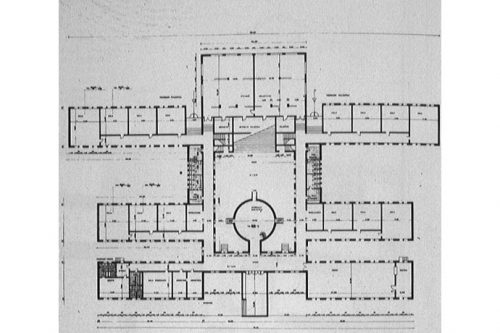 The cylindrical room and classrooms open into courtyard on two levels, the gym can be accessed from the upper floor and two large common rooms from the bottom.

The road opposite the school, like the conical fireplace, has a symbolic value, performing with brickwork, as the old factories made linking the school with the meaning of the industrial landscape that surrounds it. 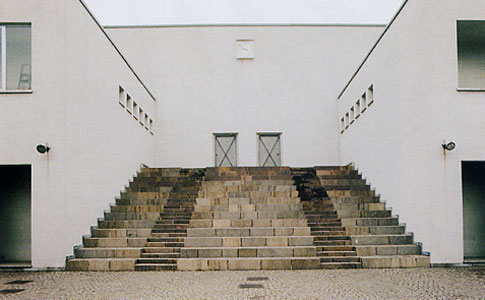 In the school of Fagnano Olona common core is the central courtyard with steps. A playground, a space for meetings, town square and theater, but also informal teaching and learning spaces act as a meeting place inside. The yard looks like a theater, where the staircase connecting the two levels becomes a cave. Invisible from the outside, the courtyard is as cozy as a residential and private patio. 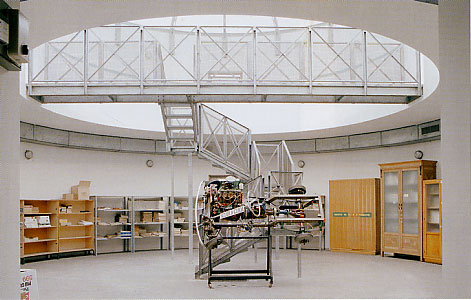 Library circular also part of the courtyard, adjacent to the entrance of the school. She is accessed through the lobby, which also separates the accesses to the clerk’s office, the principal’s office, staff room and classrooms canteen.
The library is topped by a conical roof in the middle of a courtyard cylinder, this volume windows are square. Frustoconical chimney also assumes an abstract character of the monument.

The school meets a classical typology: the classrooms are arranged along wings sticking out on either side of a central body. In this body they are grouped around a courtyard, the core activities of the building.

School blocks that extend outward are divided into a hierarchy of smaller groups. In Fagnano Olona, ​​classrooms are repeating units, arranged in four linear blocks and three different sizes. 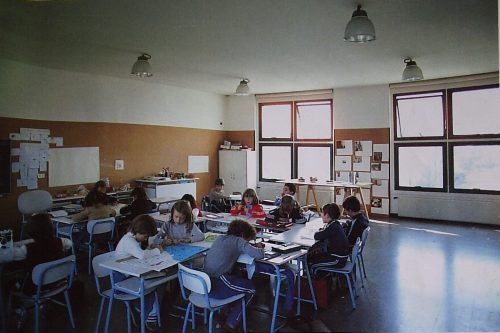 Longer containing 4 classrooms with a corridor of 2.5m, distribution is repeated in the two plants. This expansion in the size of the hall allows extreme northwest classrooms are wider than the southeast block where the corridor is 2m.

The shorter wings contain three classrooms and a room in the hallway, at the end of the courtyard, used as teaching space and informal learning. These classrooms have about half of surface used for formal education. These blocks are on one level with a corridor of 2m. Blocks outside area framed with trees and grass.

The corridors leading to classrooms cut side and end units in the central area, as though it were roads connecting the various project sites. The element “corridor”, in turn, is key to the design of this project, as the initial projects [[Category:Rossi, Aldo|Aldo Rossi]], where the distribution scheme includes a large central path cut by several secondary routes. During the course of the project the “path” plant was recently expanded by little, until it became a courtyard and a playground and meeting not only a transit area more.

The materials used are traditional local construction, plastered to the support structure, painted doors and windows and bricks, terracotta tiles and bricks for metal plants.

In front of the building sector brand smoked red brick plant where the heating systems are located.

The cylinder houses the library is covered by a cone glass with a metallic frame.