The Case Study House No. 9 designed by Charles Eames and Eero Saarinen for the director and editor of Arts & Architecture, John Entenza, has been considered from the point of view of construction, as the “twin” of the Case Study House # 8 or Eames House, although its construction covers completely different needs. A modern magazine defines as “technologically but architecturally opposed twin”. Since its publication in 1945 design to construction in 1949 did not suffer too many changes in its conception.

Its owner lived and worked in the Case Study House No. 9 for five years, then sold it and from that time the house went through many changes in its original design.

The Case Study House No. 9 is built on land that occupies approximately one hectare of grassland overlooking the Pacific Ocean, at 205 Chautauca Boulevard, Pacific Palisades, Los ageles, California, United States, a few meters from the Eames House.

Eames and Saarinen designed the housing so that the landscape became an extension of the interior space, so that the house is intimately relate to their environment.

The main objective of the architects in this house was getting a spacious interior as possible using a minimum structure. The space was designed according to the principle of “elastic space”. The architects have developed the idea that space can expand or contract depending on the occupation of the family or the number of guests.

As the state House passed idea to the project under construction, always followed the concept and clear purpose that its owner, Mrs Entenza had in mind. As in all similar projects, the construction phase was altered by some problems and delays, however the building was consistent with his original idea to create a beautiful environment.

To achieve its objective Eames and Saarinen placed four steel columns in the center, allowing cross bracing and continuity, transmitting most of the load joist outer edge of the rectangle, thus all elements Interior carriers carry a relatively light load and equal.

According Edgardo Contini, project engineer….. “the intention of the Entenza House is to remove the structure to become an anti-structural construction, structural presence as anonymous as possible. In this house, the beams are not expressed, the columns are not visible “…

The total was architectural concept, it was decided in terms of architecture, unlike the house Eames House, that was structurally sound.

Although the CSH CSH # 9 and # 8 had similar structures, metal profiles, very light, and the same materials and methods were used, they were conceptually different: the Entenza House is vertical while the Eames House is horizontal. Although the primary focus of architects, probably reached with the two projects was to demonstrate the flexibility of modular steel to meet the different needs of different owners.

In the Eames house structure rises to the fore, is the first expression of the building. The structuring is not only literal, but figurative, articulates the rhythm and cadence of the project. In the House of Entenza, research is on a completely different level. The structural system is used much more minimalist, not used to articulate the rhythm and space, contrary seems that the goal in Entenza House were using the structural form for totally free and access a full spatial and programmatic flexibility.

On numerous occasions the architects said that… “both houses, which are part of a larger project, are a statement of attitude, and as such, are very proud and given its reasons for being, we consider a great success”…

The house is set on a square base of 16.50 meters wide, occupying nearly full. All functions of the house, including the garage and pantry are organized within this square plan.

The large public space, with 11 meters long, has been designed to be used individually or social, can be divided naturally in basic areas such as dining room, family room or meeting space for more or less people. In the center of the room a separate chimney that accentuates the decor was located.

Each sector is separated by a series of pieces of complete or partial opacity, although some are completely translucent, creating, not only between themselves but also with the outside space a subtle relationship. In the northeast quadrant two bedrooms and two bathrooms are located in northwestern garage, laundry and storage. The entrance to the house from the street is by the side of the garage, separated from it by a translucent glass door that allows the passage of light from the skylight existing therein.

Another element of discontinuity introduced by Eames and Saarinen is the different levels on the floor of the house, between the two northern and southern quadrants of 90 cm, allowing the creation of large stirrups in the middle of the room. These steps create informal seats that increase the living space in the home. Between the bedroom and the living room, separated by a sliding panel, the height difference allows the creation of a sofa whose support reaches the floor of the room.

Both the lounge and kitchen open to the south and are separated by a closet wall.

The studio, located between the public area and bedrooms, is the only private space of the house without windows, to avoid outside distractions.

This home has been designed to be constructed in accordance with industry practice, but in reality it was not intended as a prototype.

The CSH # 9 was the first project of the program to be built with a steel and glass, hidden between the plaster and wood panels lining the walls. The cover was done with a single flat concrete slab and the interior roof has been covered with birch wood slats. H columns that form in the steel structure are 10cm wide by 2.13 meters high.

Some of the lounge seats were built with material work, drawing on uneven ground. A wall of sliding glass doors leading from floor to ceiling connecting the interior and exterior prairie landscape and the nearby Ocean. These combined with other fixed sliders are repeated throughout the house, both externally and internally allowing great flexibility and functional and spatial malleability. 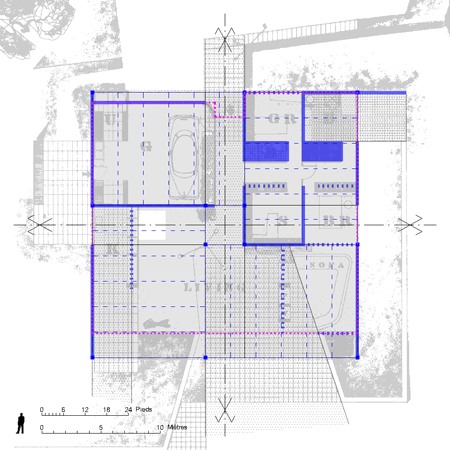 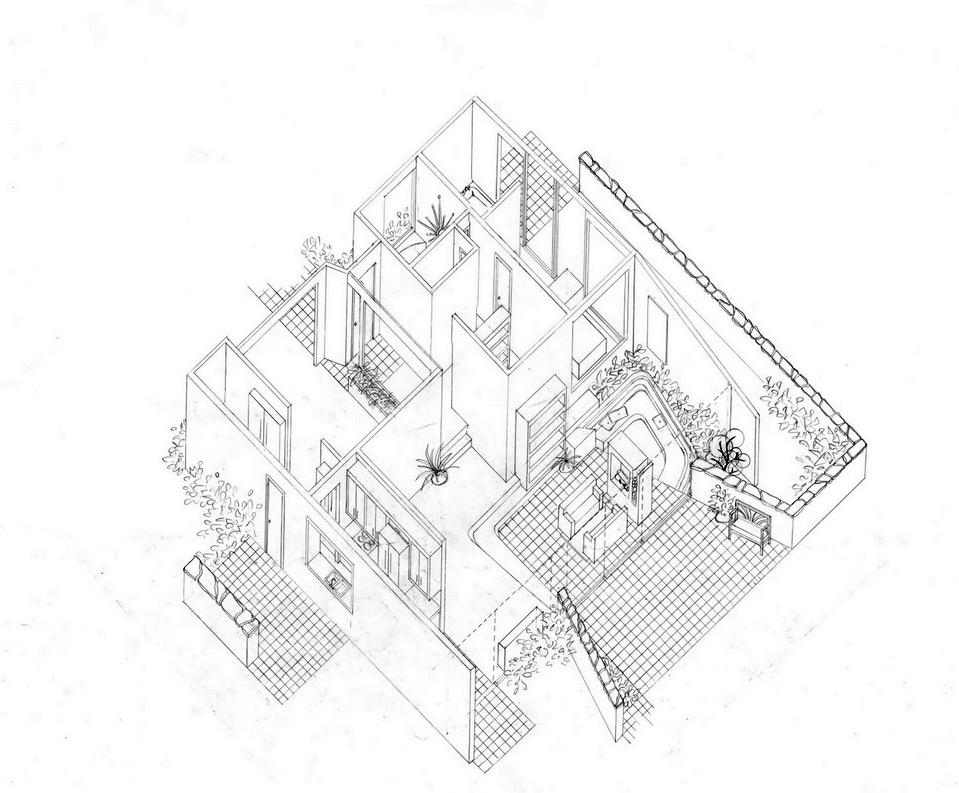 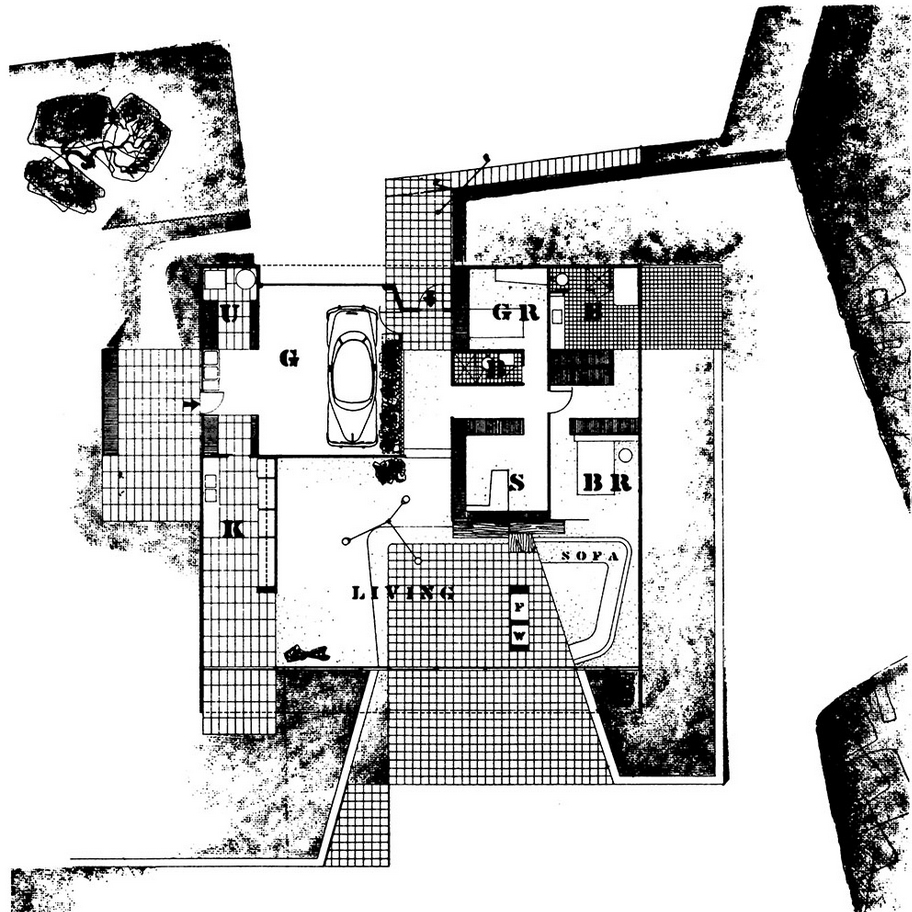 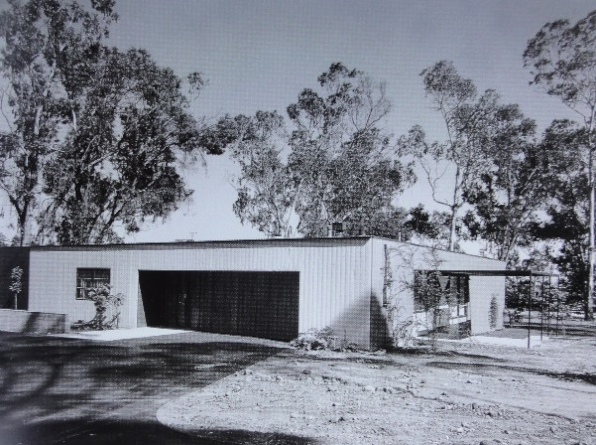 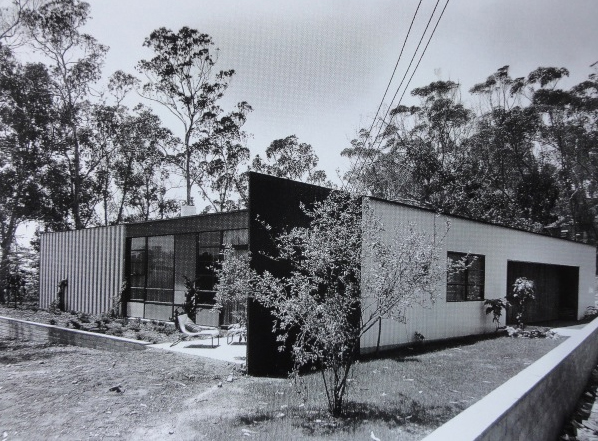 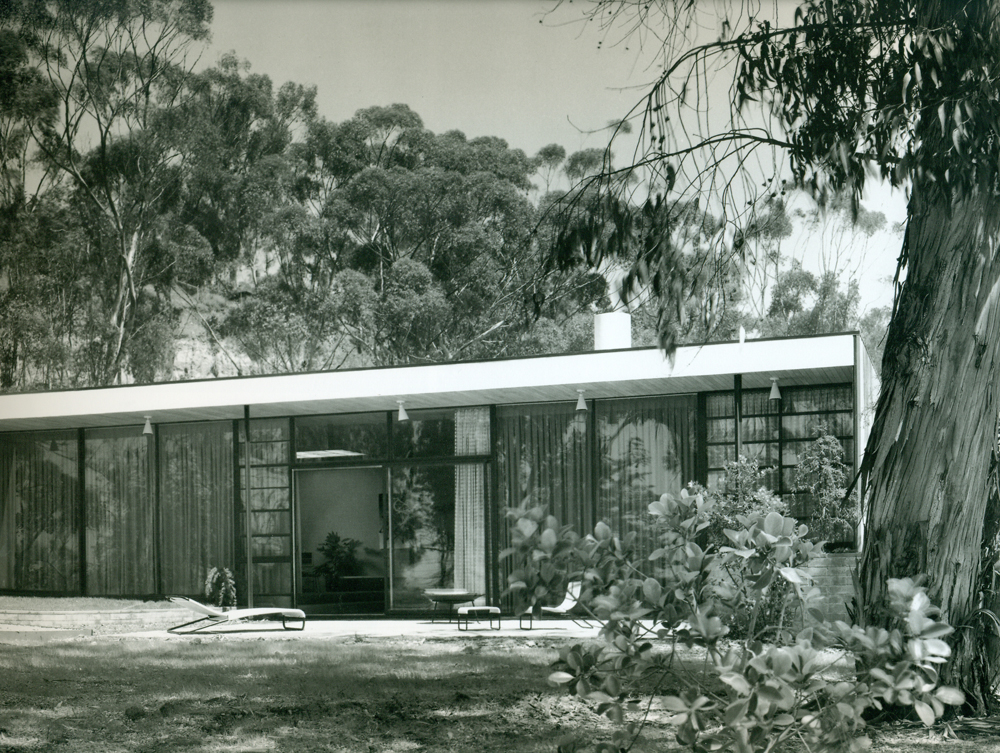 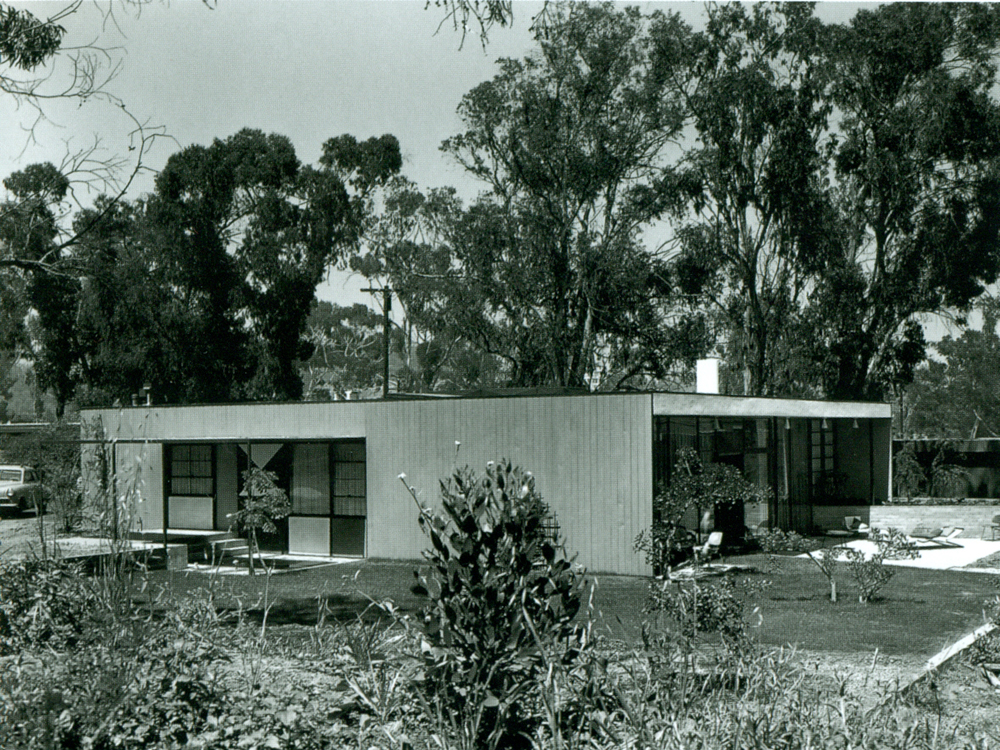 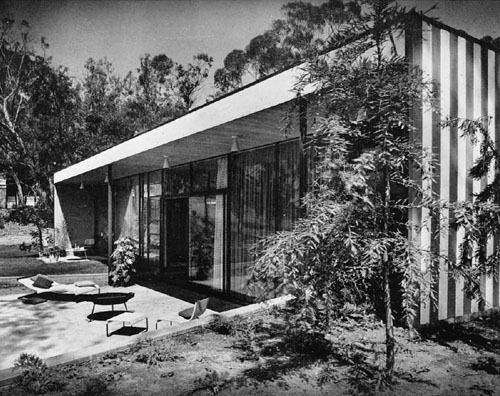 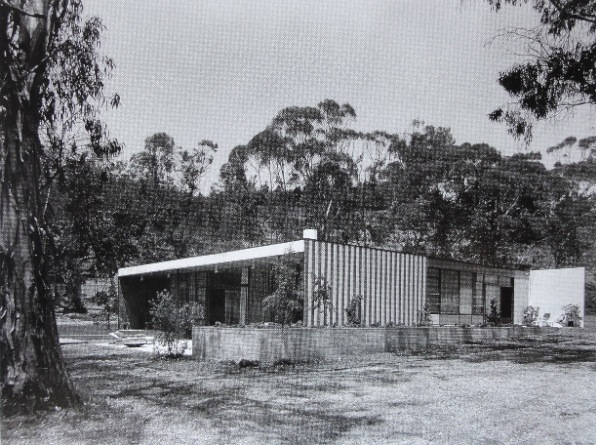 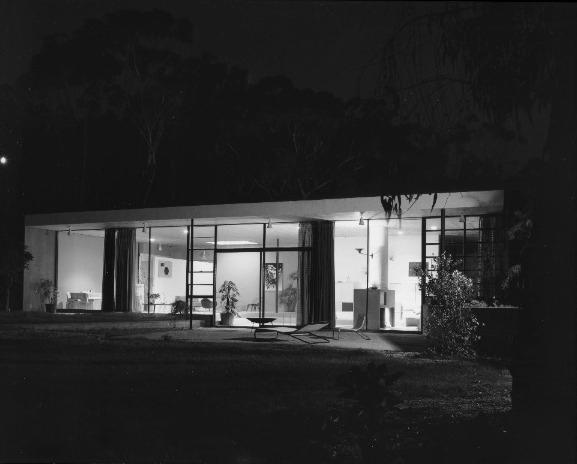 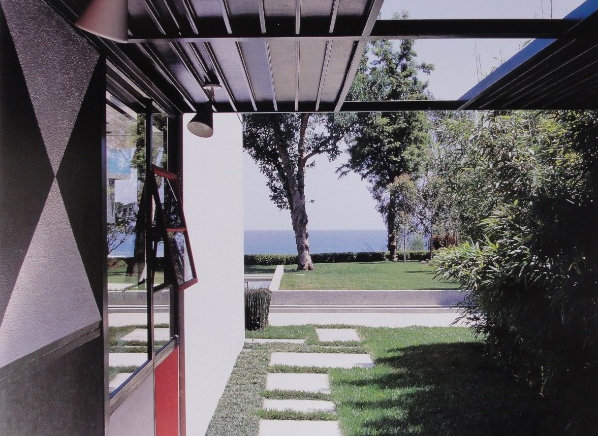 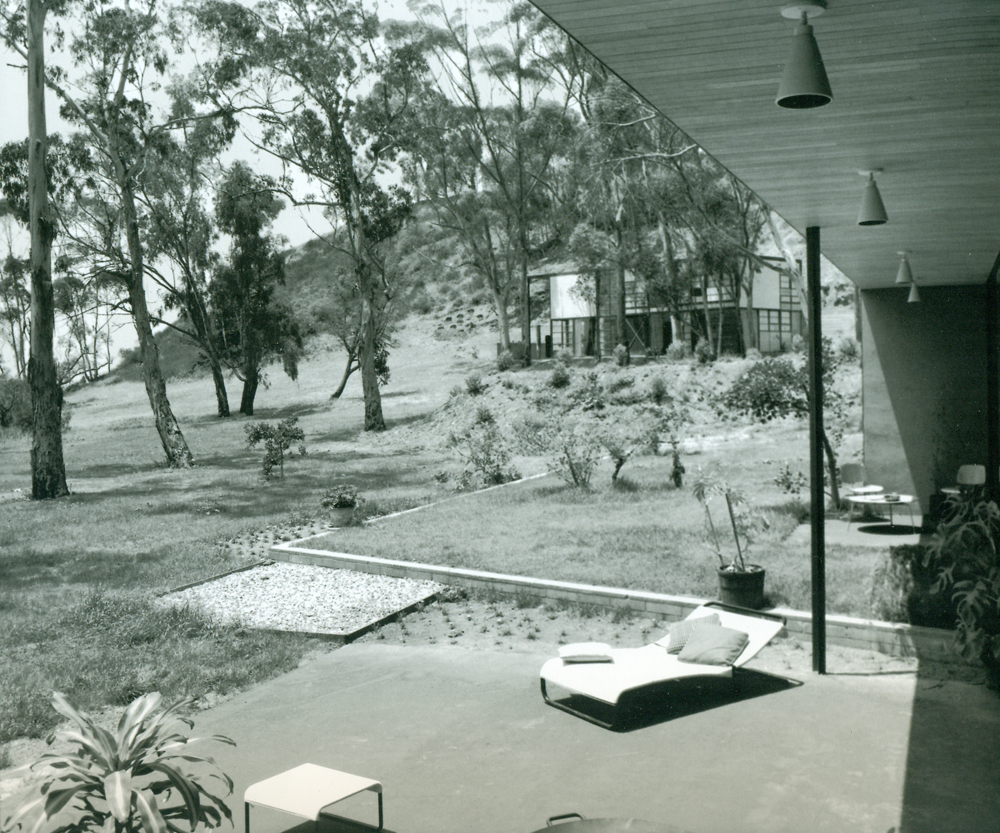 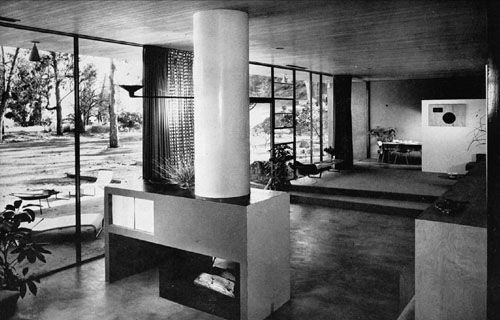 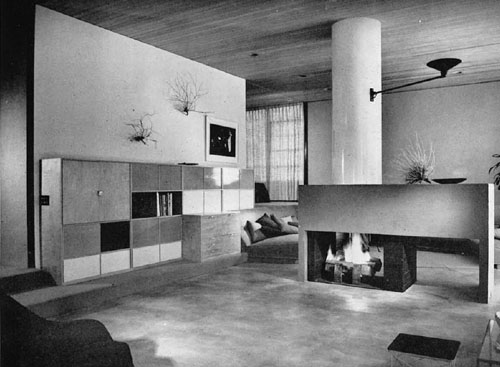 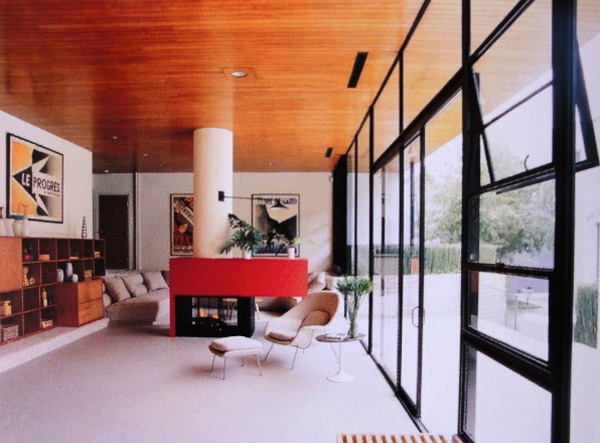 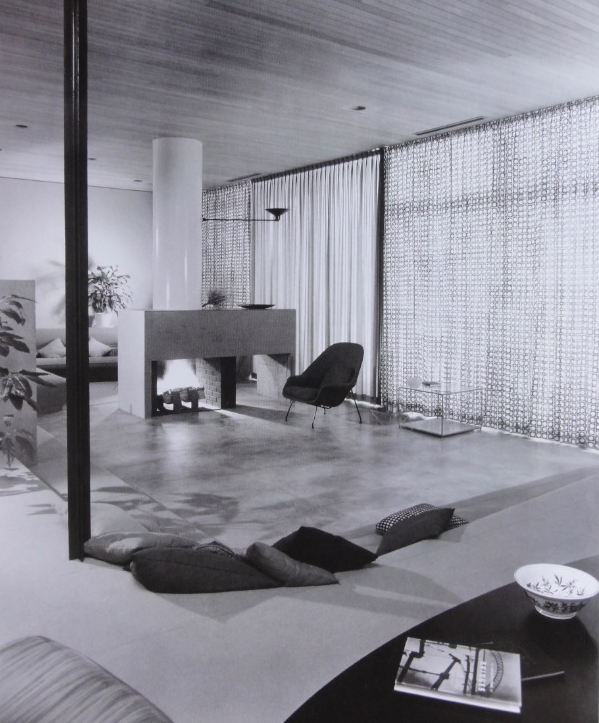 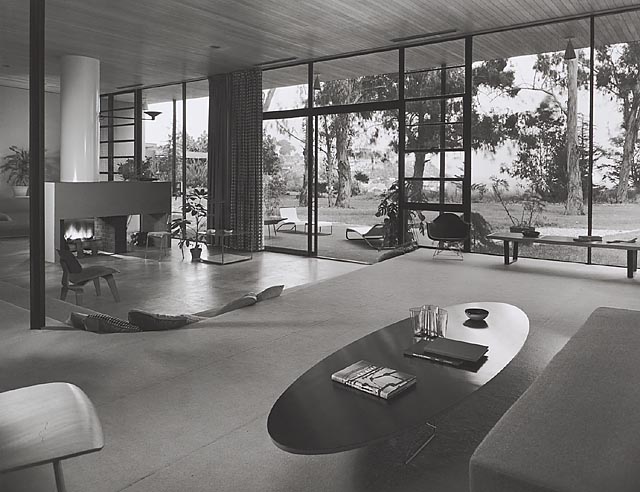 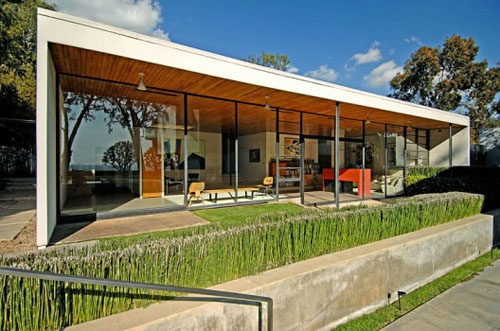 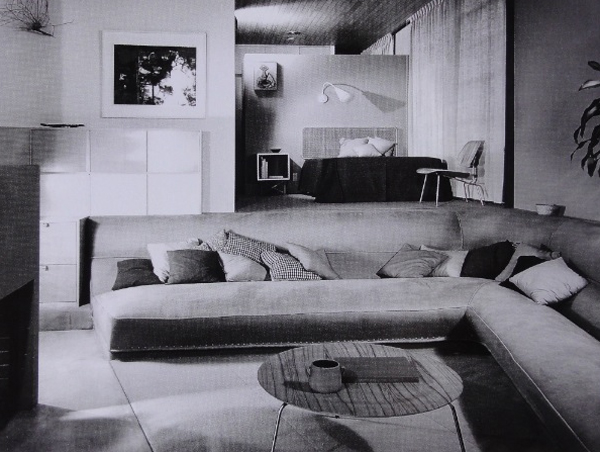 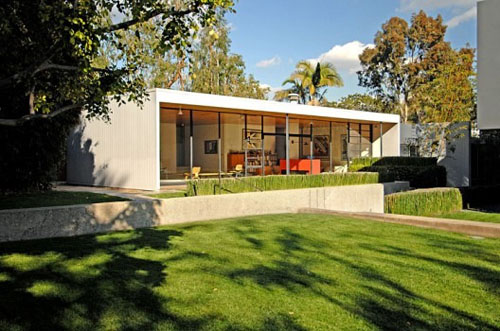 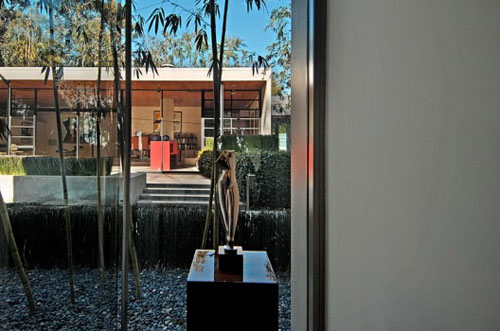 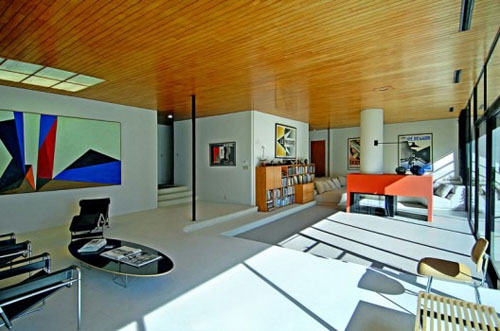