This house was built by Swiss architect Michel Polak, well known in Belgium for works such as the Residential Palace, 1928, and the dental institute George Eastman in The Leopold Parc, commissioned by Baron Louis Empain, son of a very wealthy Belgian industrialist. It was located in the Nation Avenue, which later would be renamed Avenue Franklin Roosevelt. This project Polak with the collaboration of Alfred Hoch.

From the beginning the house raised much curiosity and enthusiasm because of its modern and luxurious look. In its construction, in addition to high quality materials used a lot of work was put into the details and stylistic consistency of all based on simple lines.

In 1937 Louis Empain, a great lover of art, donated the property to the state of Belgium with the aim of creating a museum of contemporary art in the building. This project, however, be done quickly, and it was not until years later that it was developed under the direction of founding La Cambre School of Arts, who organized several exhibitions until 1943. In that year the town was seized by the German army and he was under their rule until the end of World War II. Thus, during this time he served as a refuge for the Allies and later as the USSR embassy in breach because the function for which it was donated to the Belgian state.

Since Louis Empain’s wishes were not carried out, the house recovered in the 60s, to finish selling it in 1973. Then the house was rented by RTL television for about ten years.

From the nineties the house was practically abandoned. In 2000 it was bought by the Belgian entrepreneur Stephan Jourdain that demolished several parts of the building without the necessary permits. In July 2001 the commission of conservation of monuments and historic sites Brussels stopped these works in order to preserve the villa. Later the house was acquired by the Boghossian Foundation in 2006. This, plus the fact that in March 2007 the village was listed in the equity of the Capital Region by the Belgian government did think that the villa will He is hoping for a better future.

The villa was reopened on 21 April 2010. Today fulfills the role of being a center for dialogue between the cultures of East and West. In 2011 he won the Europa Nostra award for European Cultural Heritage. In the Boghossian Foundation Villa Empain holds art exhibitions, tours, lectures, tours, workshops and concerts and other activities. 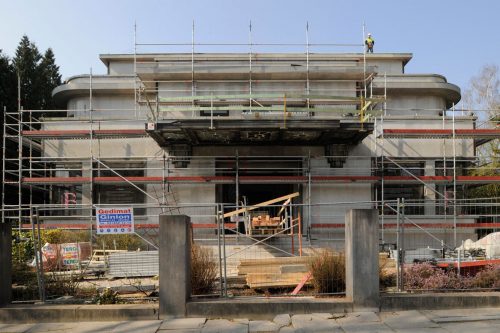 The restoration arose after the purchase of the villa by the Boghossian Foundation and the recommendation of the architect Philippe De Bloos. The first approaches to the reform plan were based on a study done in 1995 by the architect Stéphane Dusquesne at the Katholieke Universiteit Leuven. Dusquesne studio responsible for this document in the direction of historical monuments and sites of Brussels, including an investigation into the history of the town and a collection of photographs of it before its partial destruction in 2000.

The first phase of the restoration was based on available historical documents, such as photographs, plans, accounts, correspondence, etc. This information was collected for six months by Carlo Chapelle, hired by architect Francis Metzger. Besides this documentation it was conducted an in situ study of the building, in addition to an investigation into the time to fill the gaps in research and bring out the building to a state as close to the original but also in line with modern needs. So it was done a great job in the building to pinpoint the building systems, materials, colors, techniques, etc. Samples taken to the laboratory to create color palettes were taken. This work was in the hands of the Royal Institute of Cultural Heritage.

Based on all these data is carried out reform plan, which had to be reconciled with the requirements of the Boghossian Foundation and the Royal Commission of Monuments and Sites. The proposal made ​​by architects MA2 was submitted to Brussels, and the work began in 2007.

Because of the high quality materials used in the decoration of the house had to hire skilled craftsmen to restore. The Valens and Jacques Delens contractors were later joined by the company Dimension 7 to restore the pool and around the garden.

Some of the most difficult points of the restoration were the replacement of the copper roof, restoring windows, marble “Bois Jourdan” and “Escalette” of walnut, rosewood and Manilcara, the restoration of stained glass window and wrought iron. After two years of work the house shines again as originally.

The Villa Empain is located on Avenue Franklin Roosevelt 67th in Brussels, Belgium. In its environs is the Bois de la Cambre Ter Kamerenbos and the Free University of Brusel·les. 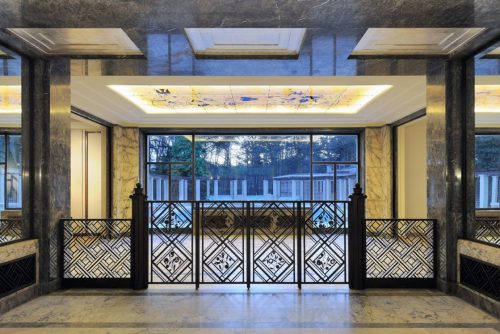 After the death of Baron Édouard Louis Joseph Empain, his son inherited industrial wealth and decided to return to Brussels after being a female traveling time. With just twenty-one years young Baron Louis Empain decided to build a house to show their position in the wealthy class Belgium. For this he chose a place in a privileged neighborhood and hired a foreign architect, Swiss Michel Polak, demonstrating their non-dependence of the customs of their country. Polak used in the design of the villa the most avant-garde, Art Deco, and the best materials to extol the position of Baron Empain.

The project is located on a large plot of over 3,200 square meters. It includes a monumental villa with four polished granite facades and a large garden surrounding the pool and pergola that accompanies it. There is also a cottage for the service of the house.

The villa has three floors and a basement. Access to the plot is via a path with an inlet and an outlet for cars. After alighting one must climb a few stairs to enter the ground floor. The interior space is quite symmetrical, organized around a large lobby triple height. On both sides of the lobby are two offices together with service rooms. Adjacent to the lobby is a lounge. On the back of the house, overlooking the pool, you are the dining room and large living room. To access the upper floors there are two staircases. One is located in the large central hall, while the other is in the small lounge. 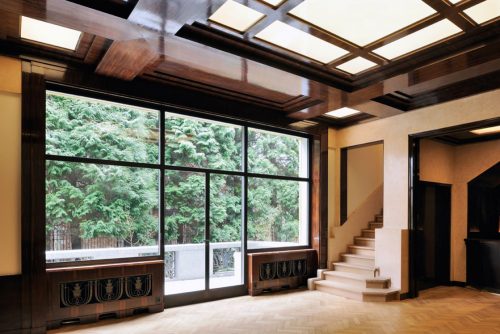 On the first floor there are four bedrooms, each with private bathroom, and an office. In addition there is a weapons room overlooking the main facade of the villa. On the second floor there are six bedrooms, two bathrooms and a couple of offices. In the basement kitchen and pantries, files, servers and boiler rooms in the house are located.

The pool is located at the rear of the property. To get there one must download one few steps from the ground floor of the house. This, therefore, is at a level somewhat higher than the street, dominating the space. In the back of the pool house and garage service is located.

The main facade of the villa is almost symmetrical. The elevation of the town on a few steps can create some openings that bring light to the basement. The Art Deco style of the villa and can be seen in the design of the front door. They characterize the geometric details. Besides the town it is influenced by the Viennese architecture of the century framing their edges in gold.

In the interior the noble materials used and details Art Deco railings, roofs, fences, railings and lamps. Geometry is omnipresent in the project, both in its plant and the room arrangement and decoration.

a variety of materials was used in the project: marble floors and walls, polished granite facades, bronze cover, wrought iron carpentry, clear glass windows and translucent doors and lamps, and wood on floors, walls, ceilings and handrails. Tiles of different colors were also used to create the mosaics on the walls and floors of the bathrooms.