Embassy of Kuwait in Tokyo

Kenzo Tange developing this project in 1966. Previously the architect had already faced orders of government as themed project in Kurashiki City Council in 1958. This new project takes some characteristics of the City of Kurashiki, including distribution based on two vertical communication cores or the hierarchy of the public spaces on the ground floor and more private on top.

The hierarchy of spaces depending on their degree of privacy is something that Tange was accustomed from very small. In his childhood, the future architect lived in Shanghai, particularly in an English neighborhood characterized by red brick houses. Tange referred to his memoirs after that time as vague, while perfectly remembered his stay in that house. The mainly he described in the order of spaces, from the entrance on the ground floor, past the kitchen, storerooms and servants stays on the first floor, even the most private parts, for family use, in the third and fourth floor.

In this project we can also see the influence that had the modern movement and the idea of the architect megaestructura Kenzo Tange. Thanks to the CIAM, especially since the fifties, many Japanese architects begin to develop their particular view of these ideas of the West.

The Kuwait Embassy and Chancellery is housed in 4 Chome-13-12 Mita, Minato district in Tokyo, Japan. This area is characterized by its high urban density. The district also hosts embassies as Hungary, Australia, Iran and France, among others.

The building of the Metabolists ideas and megaestructura. It is embodied in concrete volumes brutalistas arranged so that air gaps between them which lighten the whole image left. 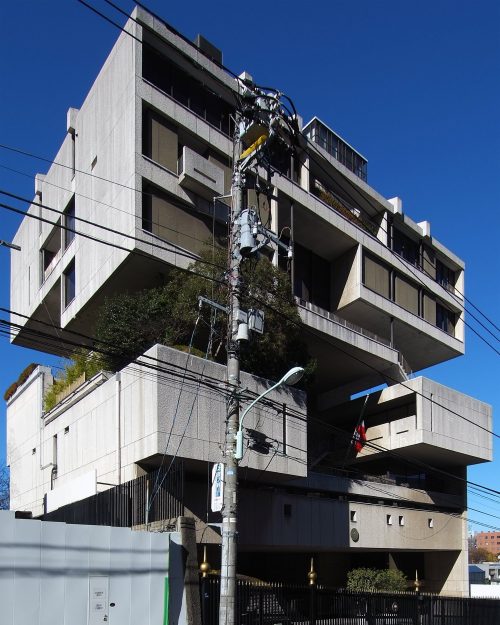 From outside the building presents a picture in which predominates the horizontality of the slabs. It also highlights the contrast between them and the large windows that are located mainly in the south and east facades.

The building is located in a highly built-up area of Tokyo. Because urban density project inwardly facing, feature, moreover, characteristic of Moorish architecture. Another determining factor of the proposal is the small size of the plot, which forces developing in the building height. The project consists of two distinct parts: the ambassador’s residence and the chancellery. Since the building program has these two distinct spaces, one chooses to place them according to their private or public appearance. Thus, on the first floors of the chancery building it is located while on top residence and dining room is located, clearly turned towards the courtyard as they would the typical Arab houses, giving privacy to the rooms. Despite this provision and space division, both have a common entrance.

The program centers around two vertical communication is distributed. On the ground floor is the entrance courtyard and lobby. From these one can go to the residence and access your waiting room or to access their respective embassy and waiting room. The basement is divided into two spaces at different heights containing the garage and the engine room. As one moves into the building first space is dedicated to the Foreign Ministry and then own the house of the ambassador. So in the first instance corridors and offices, interspersed with some terraces are located. In the first private space housed the reception, along with another terrace, above a rest room and on the top floor two courtyards and a waiting room, around which the rooms of the house are available. Machinery for air conditioning is located below deck, in the highest point of the building.

The building structure is reinforced concrete. This material is also used as exterior finish of the volumes in the project.