The EDF Tower, whose alternate names are PB 6 and Tour Hines, is a building designed by Pei Cobb Freed & Partners for the main French electricity company, Electricite de France, which established its offices in the tower.

The Tower has earned a four-star rating BREEAM by their decision to participate in improving the environment. The building also received in 2009 a very good score, even before they met the intention of the company to take measures to help improve the environment for your concern on building management and well-being of its occupants.

This office tower occupies 45 floors which directly borders the “dalle” La Défense, 20 Place de la Defense, high and centered on the monumental axis extending east from the pedestrian plaza near Grande Arche prominent site, through the Arc de Triomphe and continuing through the courtyard of the Louvre, in the heart of Paris, France. 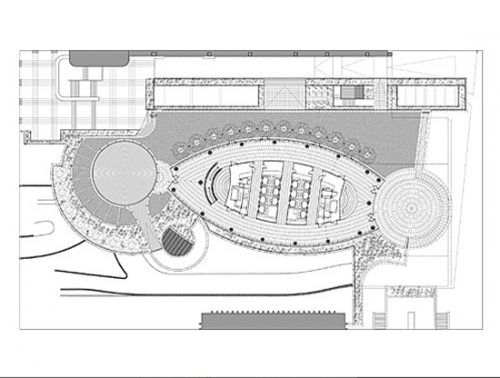 The distinctive shape of the tower is rooted in the belief that the privilege of building on this key position entails a corollary obligation to improve the quality of space and public life. Hence the shape of the tower was designed so that it does not stay away from the “dalle” gesturing toward the coupling Parvis de La Défense. The carved prow of the building creates a memorable meeting place, where passersby are invited to stop and enjoy the splendid view from an elevated platform, wrapped loop that covers the canopy, like coated steel tower and glass.

Both the north and the south entrance features a spectacular round canopy over the door, being much larger canopy that sits on the northern entrance, opposite the main square.

The 45 storey building, 4 underground for infrastructure and 41 for officees, offer almost 63.000m2 usables, 1500m2 per floor, 1500m2 for the lobby. The 4 underground levels are allocated to infrastructure, garden restaurant, café, support services, parking for 80 cars, etc.. Facilities include conference rooms, video and multimedia

With elliptical floor and 148m high, 165m with tip, one of the most striking features is the extruded tapered tower section at its northern end. The resulting tapered bore extending from the ground floor to the 26th floor and marks the main entrance to the building, an entrance built under a large canopy lenticular, 24m in diameter. The central core of the tower moved to get a better view of the Grande Arche, therefore, is the length of the tower is slightly smaller at the base than at the top, ground plant is 70m long by 32 wide and 74.98 x 31.24m high.

For foundation a concrete 2m thick slab beneath the central core was constructed with perimeter columns to raise the wall. The 41 floors of offices were built leaving between them a height of 3.45 m. 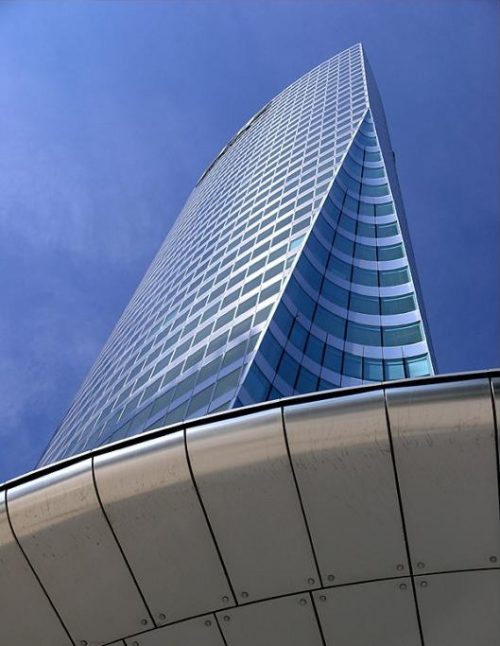 The main materials used in the construction of the tower have been reinforced concrete, steel and crystal.

The architectural firm Pei Cobb Freed & Partners designed the elliptical shape of the tower with a facade clad in alternating bands of stainless steel and slightly reflective glass panels.

Among the features of the EDF Tower include the use of heat pump for both heating and cooling to a building management system to control the air conditioning, lighting and other services.

A very important point made ​​in the design of the tower is getting a high quality indoor environment, with regular tests that certify the quality of indoor air, electric lighting in the regulations more than good natural lighting, offices and facilities acoustic accessories that help reduce sound transmission into the building. The interior finishes are made ​​with products whose volatile organic content is low or nule.

Water consumption has been reduced by a third between 2006 and 2012 due to the adoption of technology leak detection, automatic faucets, and replacement of refrigeration technology.

Energy use has been reduced by 15% between 2006 and 2012, as a result of improved management and efficiency.

Biodiversity has been improved, with additions such as bee hives and a nest of peregrine falcon. The hives produce 70kg of honey per year.