The committee set up by the Dutch ambassador in Paris in 1926, Dr. Loudon, was the instigator of the project for the construction of a Dutch house for students of that nationality who were studying in Paris. The committee secured the necessary funding and construction began in 1928. Abraham Preyer, an American gentleman originally from the Netherlands, made a generous donation in memory of his son Arthur who was killed in action in France on August 18, 1918. The works were abandoned temporarily between 1933 and 1937 due to the difficult economic times. Construction was completed thanks to the financial contributions of France and the Netherlands, and the building opened on December 2, 1938 in a ceremony led by the Princess Juliana and Prince Bernhard.

The Dutch School, also called Juliana Foundation in honor of the princess, and unique building designed by Willem Dudok to
France and influenced by Frank Lloyd Wright and the De Stijl movement, is considered a historical monument since 2005 and considered one of the masterpieces of architecture in the Cité Internationale.

The overlap with part of the construction of City Hall and City Cemetery Hilversum, made ​​the direct monitoring by Dudok almost impossible, delegating the implementation plans and direction of the work in the Dutch architect Piet Jan Kloos. The French regulations also required the presence of a French architect on the project, falling work David Ernest Picard, after whose death in 1935 was followed by his partner Tarbé Saint- Hardouin.

Hervé Baptiste, chief architect of historical monuments, and a team of French-Dutch scientists were commissioned to restore the building and restore it to its former glory. The restoration work, for which the City University issued a call for sponsors who funded, started in 2010 and re-opened its doors in 2012

The school, after many debates about its final location, was built on land located at the corner of Boulevard and Rue Emile Jourdan Faguet, rue de la Tombe Issoire in 1927, the western end of the northern buildings destined to within University City, in the south of Paris, France. Its northern side faces the Boulevard Jourdan, west to rue Emile Faguet laterally delimiting the set of the Cité, the south side look at the College of Indochina and East facing the Armenian College.

The Dutch school, designed by architect Willem Marinus Dudok, demonstrates the 1930 Dutch architectural dynamism. Unique in France, the building represents the architect’s own conception of modernity.

In the initial project emphasized the concept of ” unique institution ” within the University Campus, placing greater emphasis on its role as a center of studies on residential role, for which addition of bedrooms for residents and staff, rooms various studies, library and conference considered the possibility of building a series of workshops for artists activities, but never performed.

The Dutch College building was framed by the general conception of the Cité Internationale Universitaire de Paris, a space shared by young students from different nationalities, to which was added the claim of the French minister of education to serve as a place of understanding and insight into international climate following the Great War.

Dudock believed that “architecture was the art of define spaces ” and the Dutch school records his concept, developing a striking volumes syntax, calling attention to the accentuation of the corners, especially the northeast, where the main entrance is located and building reminiscent [ [ Hilversum City Hall | City of Hilversum ]], performed at the same time, or the use of flat roofs that he claimed gave more freedom to the plant composition. In this project Dudock records his particular way of creating spatial compositions that offer charm and give a logical functional response, using simple cubic formal elements.

The Dutch College was originally intended to house 100 students Dutch, Indonesian and French. Over the years, some of the areas were converted into additional rooms. These changes, along with the replacement of much of the wood have altered the original building.
The school develops basic organization centered around a courtyard or central vacuum, an opportunity to find a place within the school open of calm and tranquility, with a pond, away from the bustle outside the Student Citè. There is another side yard destined for ventilation.

The persistent use of angles, overlapping geometric forms and free use of decorative elements embody modern architectural ideas of the 1920s. However, some parts of the building date back clearly more traditional Dutch culture. The tower on the corner, marking the main entrance, is inspired by the medieval bell found in villages north of the Netherlands.

Because of budget problems, Dudok could not take the yellow brick exterior, as the city of Hilversum, as was his wish, and must be replaced by sandy plaster painted that color. In the northeast corner, and crowned by the tower is the main entrance which is accessed by climbing a staircase leading to the entrance landing slab covered by a large marquee and exercised the right of which stands the door.

Inside, the building is presented as a set of masses which excludes any type of outdoor decorating : horizontal volumes are organized around a central interior courtyard that serves as light well, contrasting this cozy toss with the outside, more austere.

Once in the entrance hall is separated by glass, janitor’s office, which must necessarily pass before continuing joins the gallery, at right angles, with the lobby and around the courtyard on two sides. Beside the goal is also the caretaker’s house.
The only interior decoration is an impressive mural of the great hall, and Doeve Hordjik done by representing ” colonial grandeur of the Empire “.
In the east there is the meeting room, with high ceiling and circular supporting columns visible, behind which appears a gallery open to the living.

The living room has a stage and is complemented by an adjacent room. At either side of the hall there are stairs and elevators as both side as the main stairs elevators were located in a tower especially distinctive feature within the building.
On the opposite side of the hall are located study rooms. General services downstairs, commissary, staff canteen, local linens, kitchenware and offices, are arranged longitudinally on the west side, next to one of the galleries and connect with the basement via a staircase.
On the south side the apartments of the principal and secretary.

The inner courtyard is a little below ground level of the plant, thereby allowing light to enter the basement. The pond, surrounded by planters, is placed in one corner and his background is colorful. Despite the location of the pond, at an angle, the court held an orientation to the great room generally coincident with the frontal of the building, due to details such as the staircase and the separation wall.

In the north wing houses the male student rooms with its own staircase near the entrance, on the west girls with a ladder opposite of the above in the northwest corner. The double rooms are located in the south.

Although more compact and concentrated, the building, as in the city of Hilversum, consists of four staggered bodies and volumetric variables that are assembled around a central courtyard.

The reinforced concrete structure was designed with the brackets flush facade, will be exempt only some of them on the ground floor, but they were inside the room and did not enter the delimitation wall thereof.
Often glass panels and partitions rushed directly on their axes, and in any case never tried to avoid by game lecorbuseriano free plant.

As in the Hilversum Town Hall construction is masonry, reinforced concrete and steel beams with internal divisions partitions, but unlike the latter the facades, for budgetary reasons, could not be coated with yellow brick Dudok as intended. Instead we used a sandy plaster tinted with the same color.

In the windows metalwork used in many different sizes, adapted to the demands both internal and external to the expressive elements characteristic of the works of architect, towers, awnings, overhangs. The exterior trim were painted in a similar sandy yellow facades.

On the facades of the streets Bvd. Faguet rue Jourdan and the bedroom windows were arranged in solid bars and bedrooms facing the courtyard, but individualized lengthwise, with windows made ​​of small squares. Downstairs one side that frames the courtyard was covered with large vertical windows and grilles. In some cases the windows are flush with facade and other tucked into the wall.

The inner courtyard is surrounded by flower and the pond bottom covered with small pieces of tile in blue, green and gold. 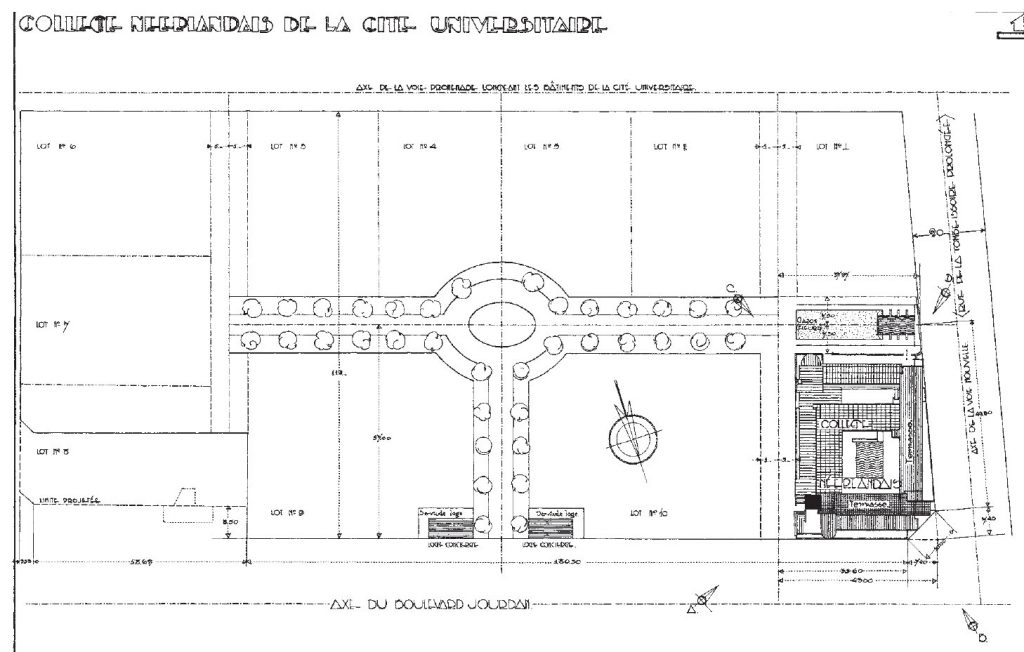 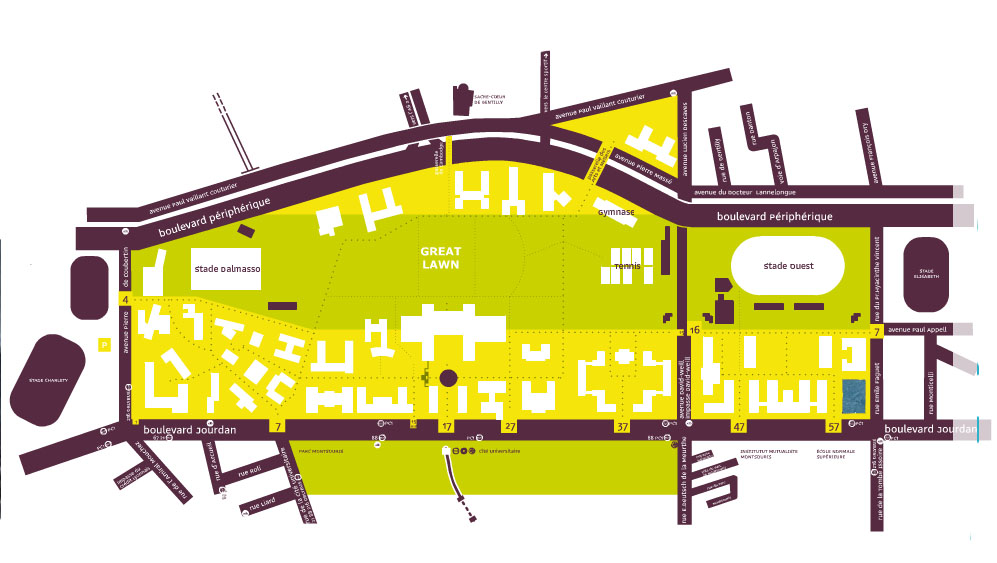 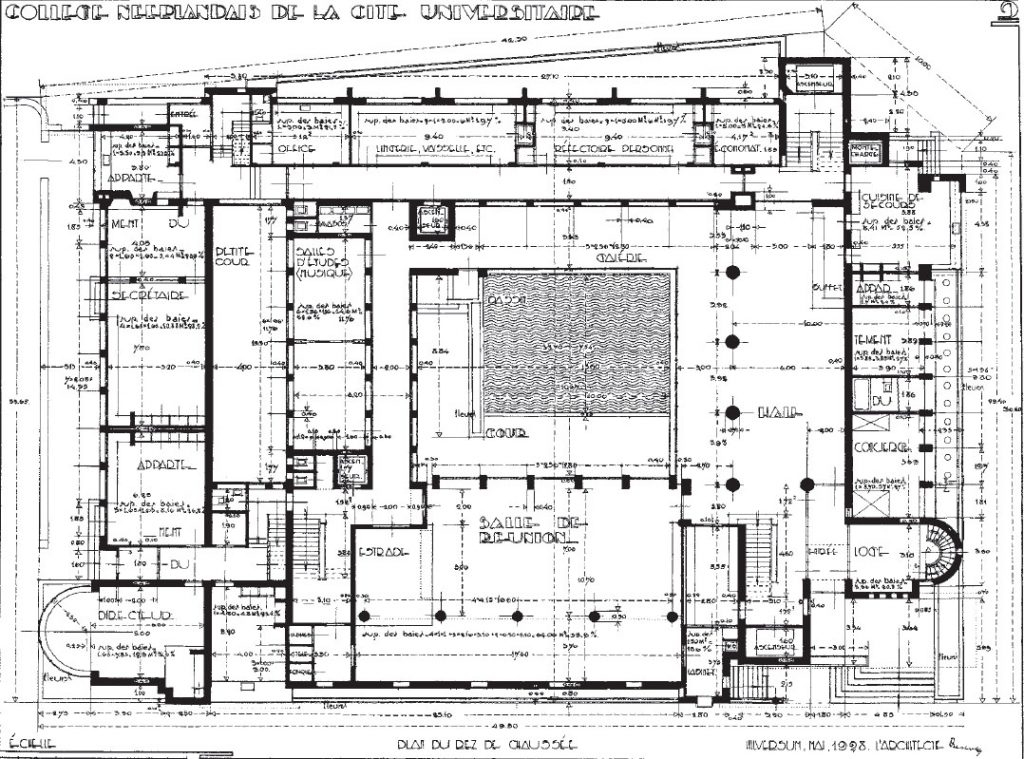 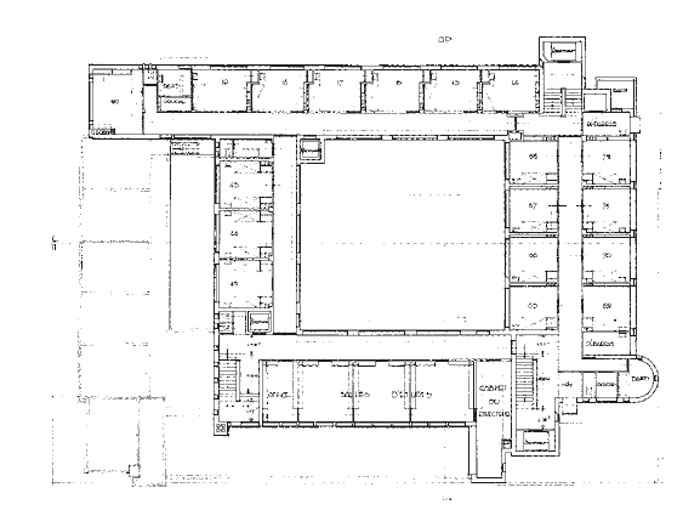 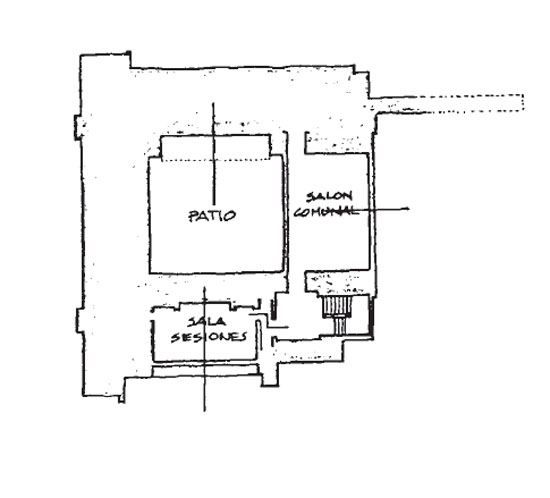 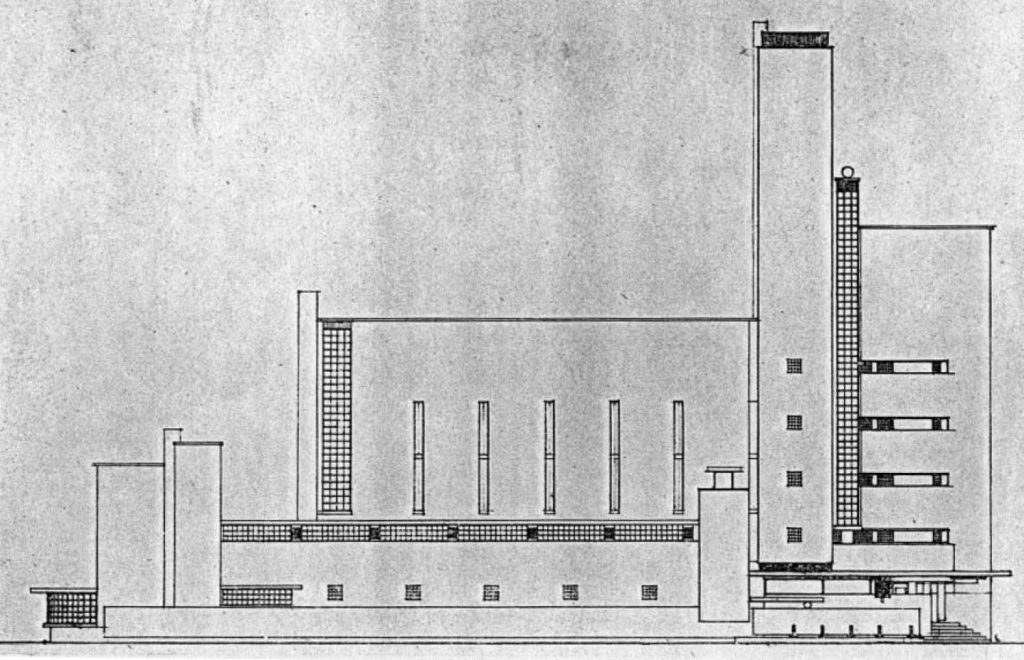 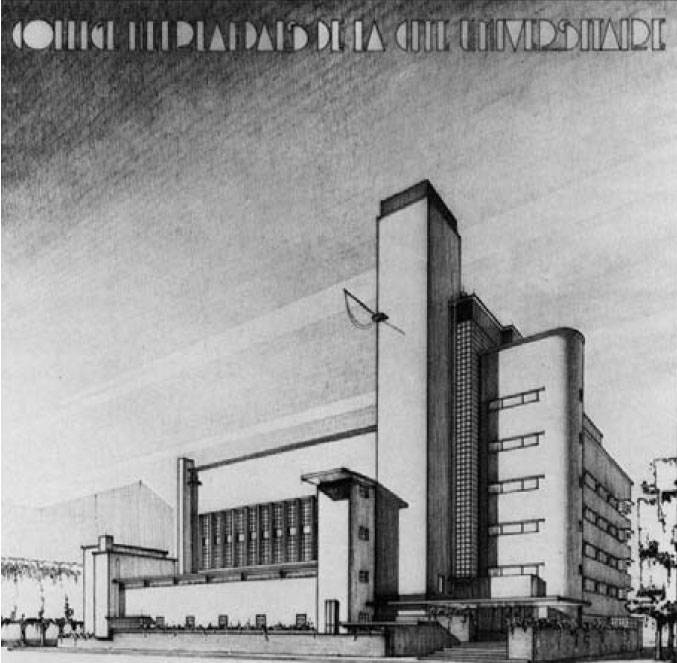 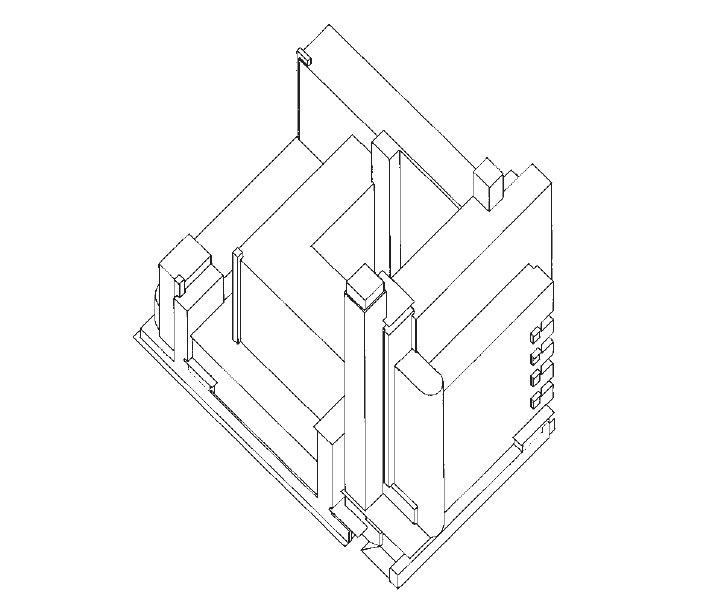 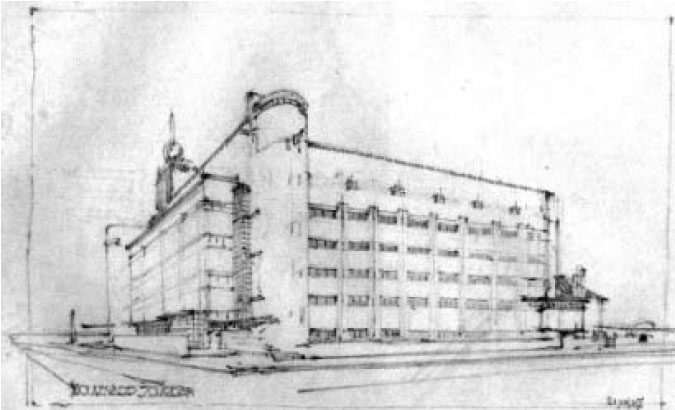 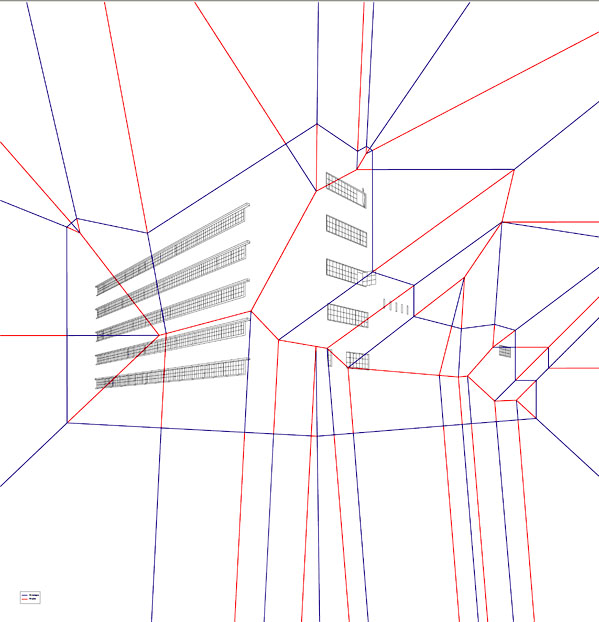 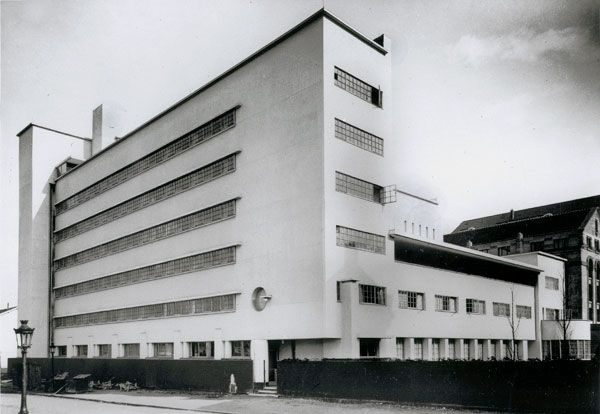 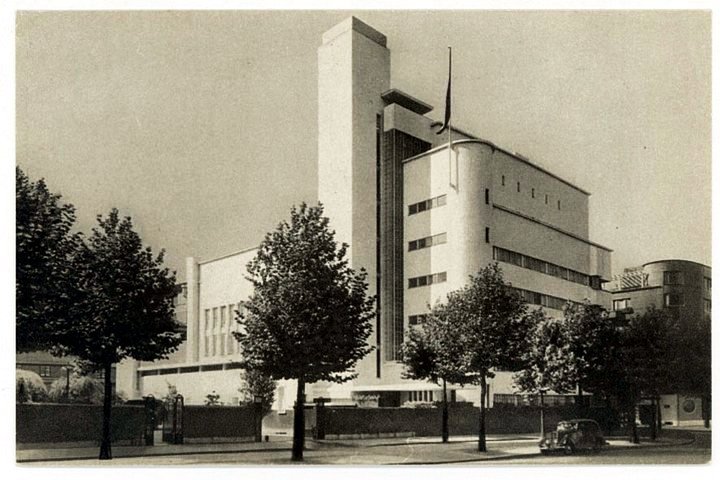 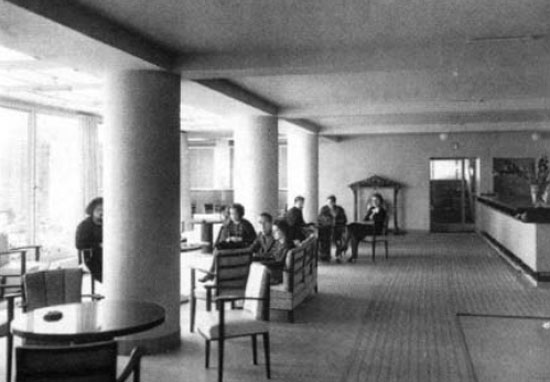 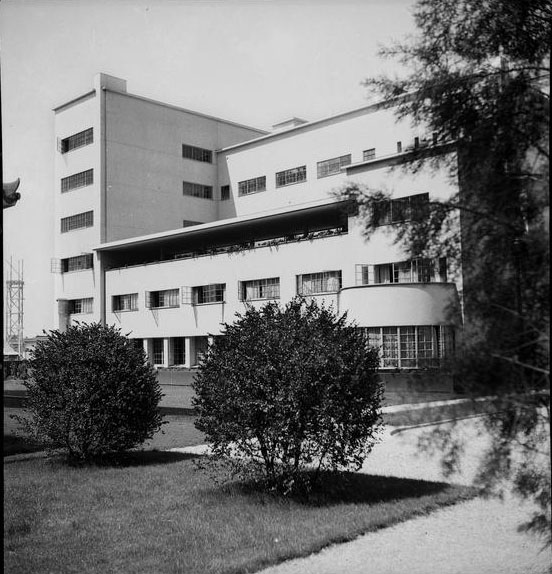 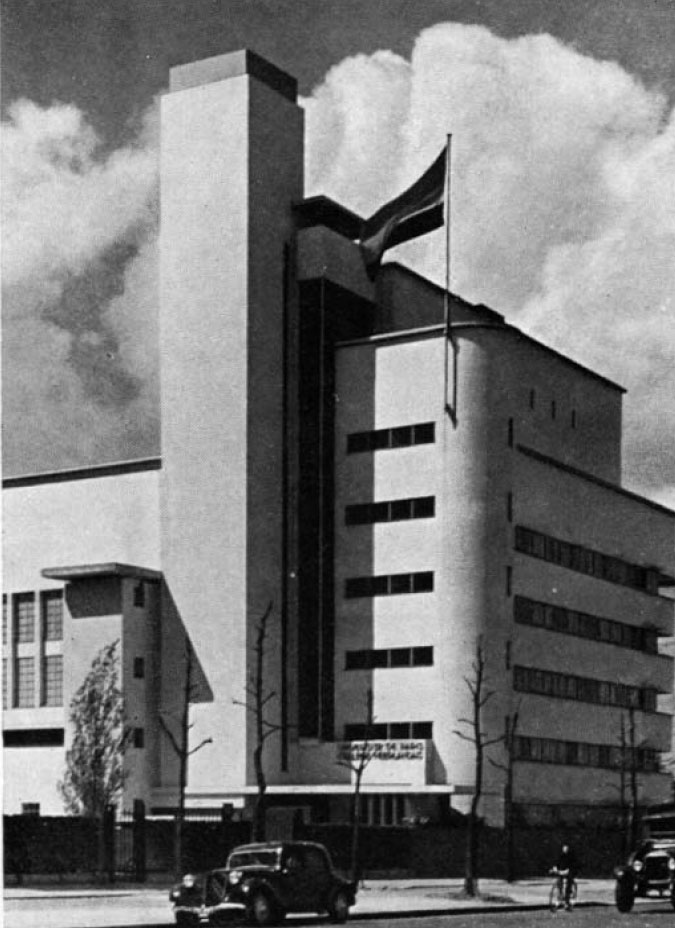 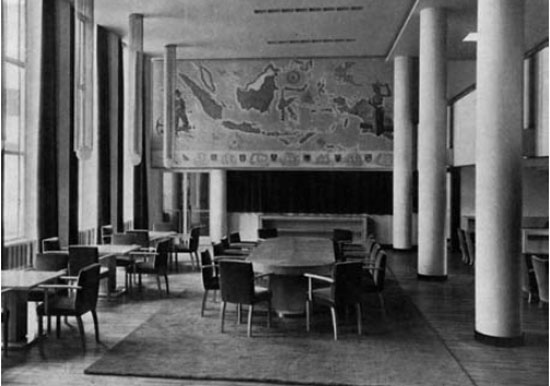 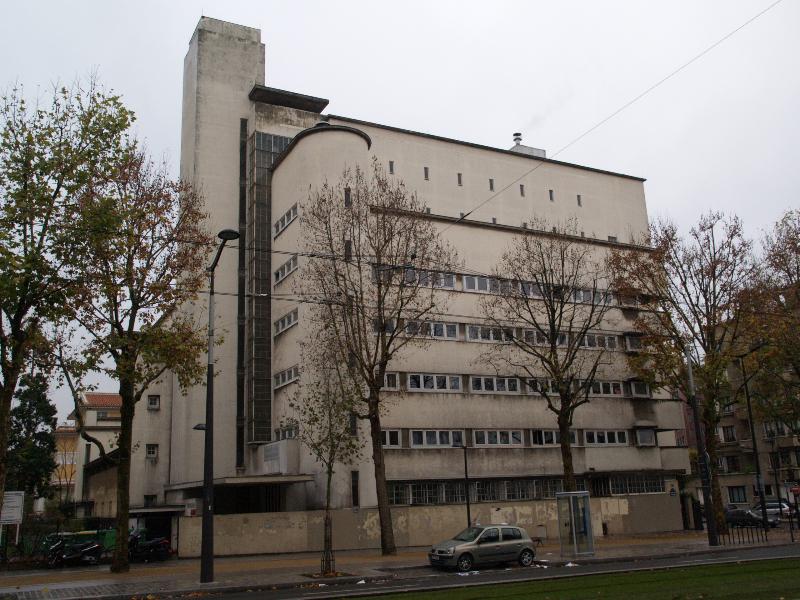 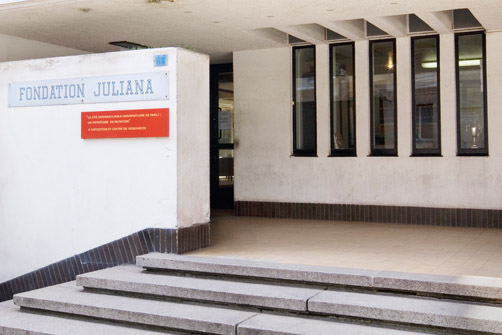 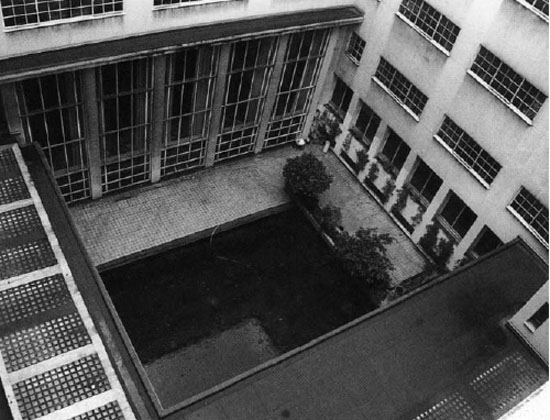 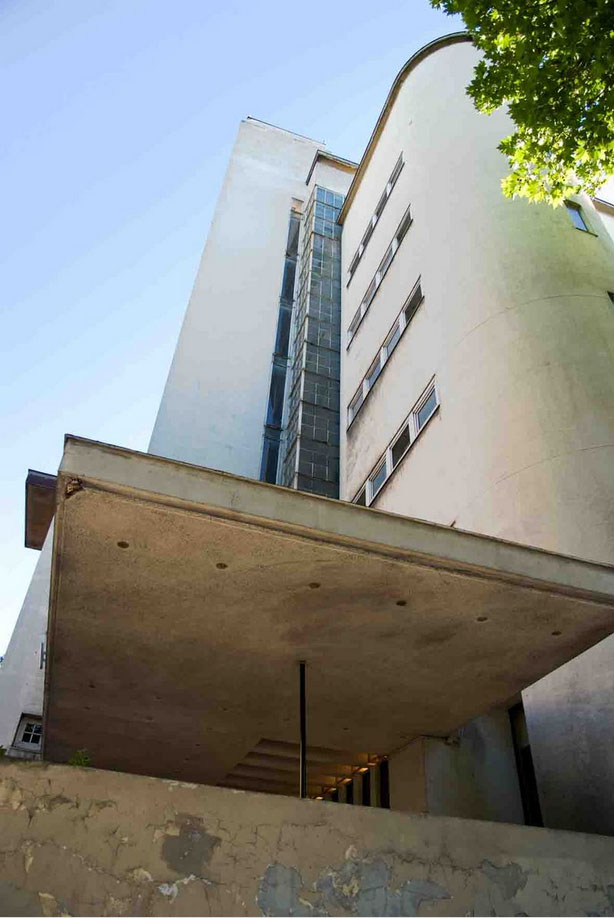 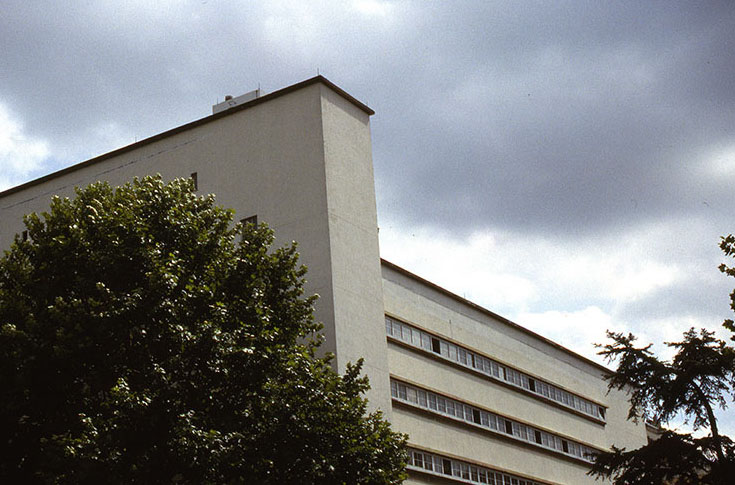 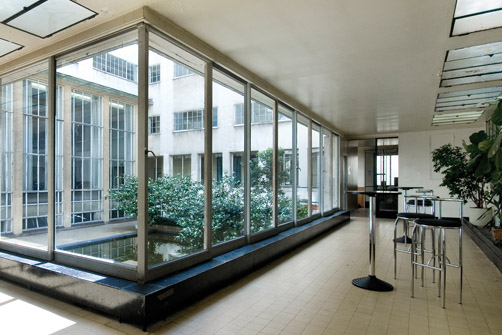 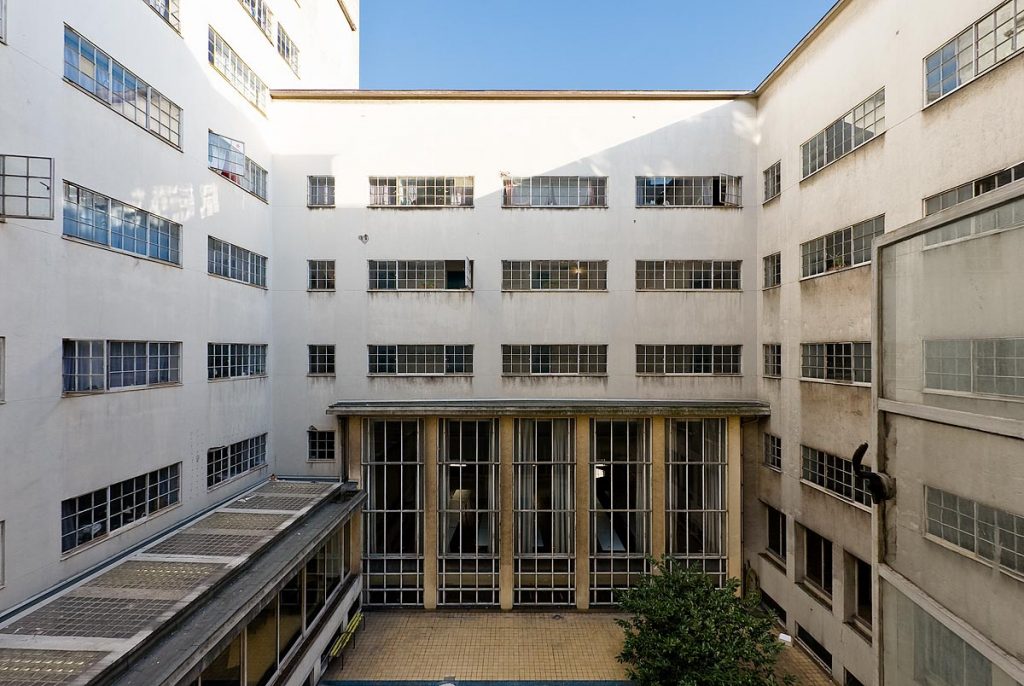 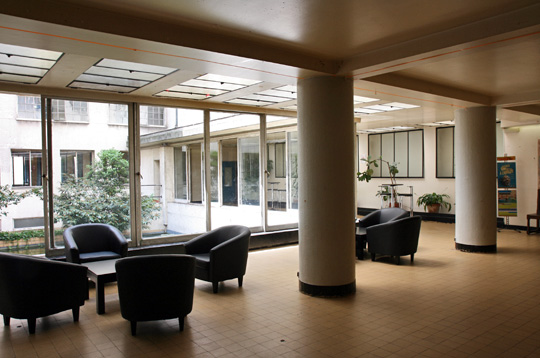