This project, designed by the Japanese architect Arata Isozaki was the result of a confrontation and a place, both with the peculiar way of conceiving architecture of the user.

The program provided by the City of A Coruña is structured around a large exhibition area of 1200 m2 recommended along with other units such as an assembly hall, a hall for temporary exhibitions and other lower ranking.

The building of Domus, the House of Man, is the world’s first interactive museum that deals with global and Monographic man. It has over 200 interactive modules to have fun and reflect on the characteristics of the human species.

On the façade facing the sea there is a bronze statue of Fernando Botero “Roman Soldier”. The museum has a scientific committee composed of relevant personalities of the sciences and the arts. It’s mission is to advise management on the contents of the museum and exhibitions.

It is a building that bears strong winds Orzán as a curved wall as if it were a ship sailing from swollen by the wind. This wall, which is the sea front and is covered with green tiles covered with screws, a screen that is hidden inside the human body symbolizing covered with an epidermis.

It is on a rocky promontory that was the last solar vacuum available to the city of A Coruña in its seafront of teaching Orzán. From this promontory overlooks the bay and the Atlantic Ocean and its main entrance is on Via Santa Teresa 1.

The idea is to solve in addition to the functional aspects of derivatives, architectural and urbanistic aspects of plot-level and city, they not only understood as a physical fact but as an anthropological fact.

Therefore you must set a good example of alignment and architectural synthesis of international and local variables, while expressing respect for tradition and imagination.

The proposed solution has two parts are well defined by their function and setup: Building and additional space around it.

Is resolved in a single, powerful volume of irregular shaped floor fan that opens the show for the Bay and that opposes its geometry, its texture and color to the solid rock on which rests, as a paradigm Artificio, facing nature and which is positioned between and Man and the Universe.

Visitors to the House of Man takes place through two pathways that converge on one point: lobby.

The first starts at the seafront and continuing through a wide stone stairway, which begins in the southern corner of the plot level (+20.45), at the foot of the main facade.

The second, shorter route, starts in the streets of Angel Rebollo, and ends in the lobby through the building (level +36.80).

Access expository material, and access to facilities and staff responsible for maintenance is via a ramp at 28 m. long, 4.50 wide, allowing the entry of large-tonnage road vehicles and that starts in the Calle de Santa Teresa in her encounter with the Angel Rebollo street level (+33.00).

The building is crossed by a horizontal axis of communication that divides it into two well defined parts. This axis starts at Pre lobby, and once passed through the exhibition halls, the building zoned formal and functionally, resulting in a second lobby and showroom, becoming only through the four windows in ruling on the main facade a viewpoint from which to enjoy the vast and beautiful landscape of the City and the Sea 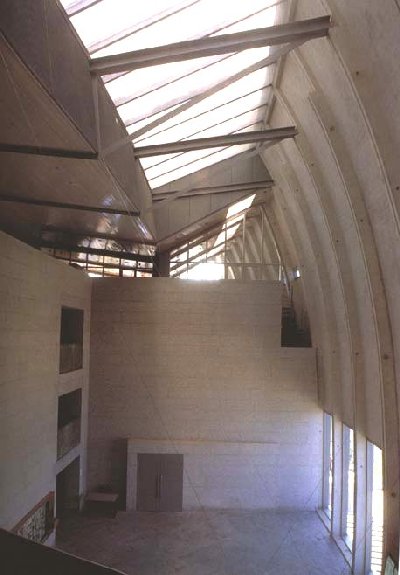 skylight on the roof

One of these parties, the larger up to the Exhibition, Temporary and Permanent.

The meeting between the two areas, located in the plane of the roof, a skylight is built. Its daylight, nuanced, bathes trasdós the gentle curvature of the facade, adding strength and serenity to the exhibition space.

The other side of the building contains offices, facilities, auxiliary, and significant, which is the Hall.

In the lower area of the building is the picnic area and a restaurant – Bar latter has direct and independent access from the outside across the street Ángel Rebollo and a little square covered by vegetation of deciduous allowing its extension as a terrace, at certain times of the year.

The main building sits on a granite massif with a height of about 20 m. irregular Taking advantage of this gap is created behind the historic facade, a series of platforms linked together by means of ramps, thus the exhibition areas.

Visitors have access to them from the level +36.80, which is the main entrance of the building and conducted a tour of the exhibition that begins in the hall – Exhibition Hall and continuing up to the level +42.50. Then, and this level is the Exhibit Hall Transitional.

The permanent exhibition hall, organized into four levels, connected between them by ramps, is limited by a single deck and the amazing concave surface of the main facade, creating an exhibition space of volume and rich meaning.

These exhibition areas, both for its function, for his body or by the volumetric space zenithal lighting-up day and night-leading interior space and more emblematic of the museum.

Since the halls are accessible to the Sala de Actos, without passing through areas of exposure or other units. It also has direct access from the outside, which ensures an independent functioning of the Board and the total autonomy of the whole museum.

As well as the meeting of the building with air occurs through the walls and the roof, the encounter with the solid rock on which stands entrusted to a number of areas of functional diversity and varied formal settings, such as:

The sharp profile of each of them, well defined and differentiated from others, not decreased its role as a component of a broader set of higher-entity and as the museum. These various spaces, public and strong functional and formal, like poles of a magnetic field with center in volume Building around which are set up and organize.

All these spaces and each of them individually behave as determinants of rooting of Building with Earth, allowing the intersection of an idea and a place, while allowing the approach and meeting the public at the Museum and with this transition and the smooth integration of this milestone in the city.

At the heart of the plot and the main facade of the building, perched on a rocky hill existing respecting their height and shape, provides a Balcony – Mirador, plant polygonal defined and sheltered by a perimeter wall. This viewpoint is the only one of the additional space accessed via the museum necessarily. As access is through the picnic area, is expanding its natural climatic era of prosperity.

In the areas of land not occupied by the Building and the additional space above, respecting the existing rock mass is a powerful natural and continuous basis for the Building. It is altered only in the corridor that it opens to allow access to the lobby from the street of Angel Rebollo.

At Town Building offers a solution capable of becoming a symbol, a city landmark, which will raise the aesthetic level of the area and, in turn, allows its use as a balcony of the city itself, which opens looking west: the Bay, and Playa del Orzán.

The main facade is made of prestressed concrete panels, in the form of “U”, by 2.61 m wide and 16.05 m. high, finished with its concave inner face to be seen.

The rear facade is formed by a double-wall factory blocks of granite 21 cm. thick, arranged in rows of 45 cm. high. These walls, 12 cm apart. among themselves, in hosting this cavity a layer of reinforced concrete, thus forming a sandwich of 54 cm. total width, which works in solidarity. 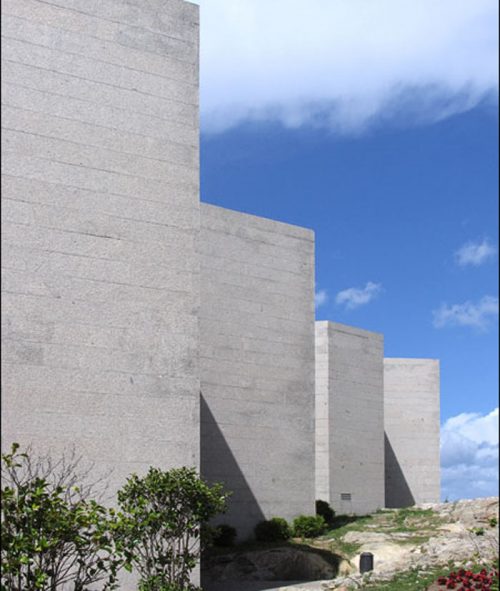 The meeting of the building with air occurs through the walls and roof.

Is resolved through a large curved surface of approximately 94 meters long and 16 tall, short crosoidales curves, geometric expression of continuity and prosperity, and well-defined edges, slightly scaly texture and metallic colors because of the slabs covering the slate, with an image that comes easily to the observer.

This takes the form of a stream Biombo, longitudinal development of large, although smaller in height, to magnify and give best actor to the main facade. This screen, consisting of patents cloths wall ashlar granite factory is responsible for establishing an adequate response to the environment and interact with the buildings nearby.

We chose the materials and construction techniques more rational and appropriate for each site, and for each case, as far as possible by choosing the standard in the area, looking for the counterpoint between tradition and avant-garde, and popular rioja rioja worship, thinking a formal logic, functional, and of course, durability, storage, maintenance and any building representative and the public requires.

• Rear façade: Double of ashlar granite factory type Mondariz Gray, locked to each other with a sheet of reinforced concrete.

• Cover: made of slate tiles with cement mortar on a slab formed by panels streamlined.

• Interior Floors: In all units of public use: irregular slabs of slate. Parquet wood xatoba in the Sala de Actos, offices, classrooms and library.

• Paramentos interior: Granite Mondariz in all units for public use, except in the Sala de Actos, and in offices, classrooms and library. In these local paraments DM panels are coated with fire retardant paint.

• False ceilings: painted wood and concrete in the exhibition. Panels of painted wood shavings in the Sala de Actos. Painted wood in the library, classrooms and offices.

To fit the building in the quarry was dug into the rock, mostly by hand, 31,500 tonnes of stone.

Formwork for concrete were conducted using 800 cubic meters of pine wood tables 130,000 centimeters wide, 10 placed one after another to reach 325 kilometers.

The building has two types of granite stone. In 6440000 there are walls and walls of gray granite Mondariz kilos. In places there are stairs and 4,563,000 pounds of pink granite Porriño, which were transported from the quarry at 550 trips.

Floor and wall in front of 18,862 pieces of used shale, and 250 pieces of 1 square meter for the interior rails.

The cladding is made with 6600 pieces of slate that are held with screws 159,348 adjusted manually.

The exterior surface is made up of pink granite slabs 5761 and Porriño 90,000 cobblestones. The workers who built the building they worked a total of 383,250 hours.