After the First World War, the followers of Modernity began to imagine a future on the heroic role. The images strongly reflected the impact of the new.

Neutra also devised their own utopias during the decades of 1920 and 1930 to generate ideas about urban design and construction techniques. These proposals had a direct impact on his work, from the non-built accommodation for workers, to luxury residences.

Rush City Reformed metropolis was his theory. Diatom Series became a housing project and was an exploration of new materials and building systems, while implying a modern treatment of the house and the impact of the car.

The term “Diatom” refers to the sediment of algae called diatoms. Even during the 1950s, Neutra continued belief that the “diatomaceous earth” was the key to making “hardened soil with steam, similar to the lightweight concrete, which could be manufactured for walls and floors in the form of insulation panels called” diatalum “. Even tried to market this product. At the end proved to be too soft and brittle, although it still continues to use in different applications.)

Neutral never stopped believing in the prefabricated houses. I never blamed the consumer for his attachment to “tradition, as we have no tradition,” as stated with contempt, referring to the continuous changes of styles. The first thing we had to do was to understand-wrote the “intimate relations in the different ways of life… What if we would build a car the same way you build a house? It would be chaotic!
Andalusia individualistic behind each potential buyer of a house he was flattered to

Diatom models were included in their proposed architecture for “ig4X”, a popular program of housing construction after the war carried out by “Architectural Forum” and the “X” was a future for change.

One of the Diatom design was inspired by a building that was the dream of American technology: the circus tent.

In his book “Amerika. Stilbildung des neuen Bauens Die in den Vereinigten Staaten “(The style of the new architecture in the United States), published in 1930, Neutra believed that membrane structure, with its center post, met all the conditions of” light in the building ‘ “… The giant of a circus tent of multiple tracks, like the Ringling Brothers Barnum and mid-nineteenth century, can be considered as the most characteristic architectural production in North America. Is ready to be dismantled, transported by rail and mounted again in a matter of hours, with their ladders, folding seats for several thousand spectators, as well as plumbing and electricity… [The way] that the different parts of the building, such as decks and strings, are just as mere efforts tensors-so-minimal size of the tent makes a model for our era, in which the lightness in the building is considered an architectural need… ”

Whether inspired by the tent or mobile Dymaxion House by Buckminster Fuller (1927), with its center post, Neutra technique used only once, and was at Diatom I, ‘one-two, a house less than 93 m2. 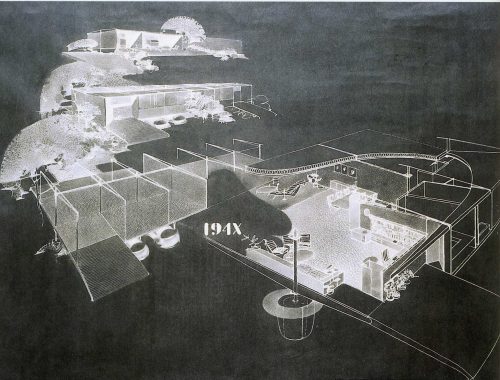 I Diatom unit consisted of a central unit with three ships of the same dimensions (5.4 x 6.7 m) and covered by eaves with an outgoing 1m, which could be extended with a module on one side and then by another unit. (Reminiscent of Le Corbusier, sublime design includes not only a garden on the roof, but in a manner similar to the cartoons of the 1930s, Neutra also painted a car rear and elegantly rounded faded from that excelled the pillars of the house).

The shorter sides of the central unit is compact material, while the longitudinal walls consist primarily of glass, from one extreme to another, so that the spaces have a bright and open, and last in a alero saledizo 1.2 m on both sides.
All floors, roofs and walls are constructed with panels of diatomaceous earth. A prefabricated kitchen and bathroom are at the heart of mechanical equipment.

The roof is suspended by cables tensioned by a series of masts whose central steel columns are set on steel bases ingenious anchored in the soil, which manage to eliminate the foundations of concrete “sobredimen versions.

Although more like exquisitely cluttered viewpoints that support points for Neutra were quite viable. Although Neutra was never to manufacture, obtained patents for such foundations by the end of the 1940s. Plants also designed to produce panels of diatomaceous earth, which were published in magazines and trade architecture. Neutra planned production schedules, transportation, loading… And even the union was concerned that would be affiliated to the workers: “What would the traditional carpenters’ unions?” He wondered. 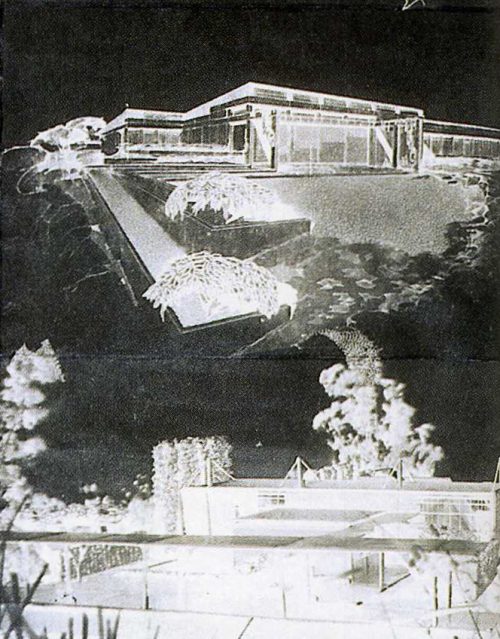 Another big house Diatom Series’ Diatom IV “, raised the opposite assumption, therefore consisted of concrete and wood, and it was much heavier.

At one end, a series of concrete pillars played the role of “spider legs” that emerged from the ends to create a master volume terrace carefully articulated.

The design was inspired by Diatom IV volumes oblong Robie House of Frank Lloyd Wright (1910). With its ventilation openings located above the beams of the wall reduced antepecho was the reference point for their projects Neutra school in Puerto Rico, which in turn served as the model for the House Tremaine.