The first impression of the buildings housing the Departments of Law and Administration at the University of Vienna is the bold use of color, both inside and out, used to “encourage gray skies Prater district. However, the feature that most long in the memory is its peculiar humanity and planning focused on social welfare and thoughtful person.

The CRAB Studio project has been awarded the 2014 RIBA European, shortlisted for the WAN Education Award 2014 and finalist in the Award for Research and Higher Education 2014 WAF.

The two buildings made ​​by CRAB Studios are located in the southwest area of the Campus which houses the Faculty of Law and the Central Administration, on the edge of Prater Park on Welthandelsplatz 1, Vienna, Austria. Have been established routes from the courtyard of the University to the Prater Park in the south, below the base. 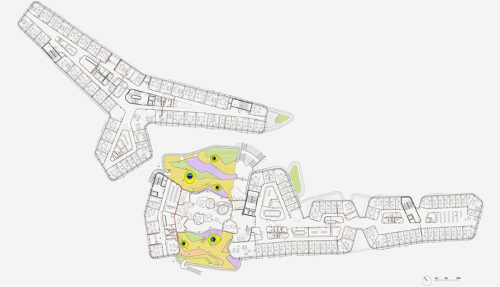 The project design is based on the conviction of Sir Peter Cook and Gavin Robotham, obtained after many years as university professors, based on the certainty that for a building dedicated to University is alive and successful must have generous and attractive interior spaces and that this spaces are not only meeting rooms, classrooms or offices, but places to “hang out”, to encourage students to stay on them after class, or find integrated spaces carved inside offering silence and recollection to once you form a whole with the rest of the building.

The overall profile was completely inspired by the landscape formation, which eventually filled with vegetation and the desire to promote life in terraces and every available surface.

The project consists of two buildings of 200m in length and a height between 5 and 3 levels, meandering stripes of colors ranging from west to east and fold into the covers, or weave in and out to create “corner sunny “. Sometimes moving to create balconies.
The exterior facade is covered with natural wood slats that protect partially the sun but are also related to the woods surrounding the campus. They also play a prominent role in the striation of the buildings as a whole paper.
CRAB Studio has incorporated “capsules of quite” in the library and “sound clouds” in conference rooms, with their own gestures for rolling chairs and key elements of furniture. 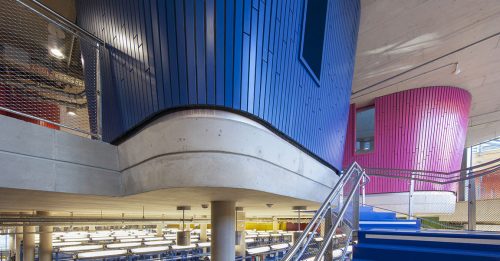 The curvilinear shape of buildings hides a highly detailed and prescriptive cell accommodation plan. One of the reasons that led the jury to choose the CRAB project was the idea that the architects sought to maximize the opportunity for social spaces and encounters, embodied in its “corners” and details like the undulating “hanging banks” under all windows, used by people who work in offices and by those who pass through the halls both. Silence and meditation is one of the concepts pursued in the project, this will have placed large sheets of soundproofing ceilings.

The use of strong colors inside works surprisingly well and is complemented with specially designed furniture by the study, all of one piece. The concrete structure provides a solid backbone to the internal spaces and allows for future flexibility in office layouts. The contrast between concrete walls and other strongly colored seen was also sought.

The exterior color continues with a mostly yellow stucco strong European tradition of color, ocher or red range, in keeping with the building. The slats of larch, randomly arranged, horizontal and parallel or perpendicular on the facade, creating stretch marks on the walls of color and refer to the neighboring forests.