In 2007, Denver International Airport was the eleventh airport in the world by passenger traffic, 136,000 passengers daily, and fifth in daily traffic of aircraft, 1,650 flights. In the 23,000 people they work and is one of the largest airports in the world.

The project begun in 1989 by Perez Architects was completed in 1995 by Fentress Bradburn Architects of Denver. The outdoor pavilion was designed by Leo A. Daly and although the original budget was 1.7 billion dollars, due to structural problems, a budget increase was necessary finally costs rose to 5000 million dollars.

It was built on an area of ​​140,000 km2, forcing move an amount equivalent to a third of what was needed to excavate to build the Panama Canal land.

It is no exaggeration to say that Denver Airport should be handled as if it were a small town. In fact, it’s almost like a big city, it is one of the most important airports in the world and the first to allow landing three aircraft at the same time on parallel runways, even with bad weather.

The “caregivers” monitor the multilayer airport infrastructure through a series of “online” models and GIS maps. While hundreds of thousands of graphic files are different (DWG, ARC, raster, vector) of Oracle databases, when they are consulted they are presented as Autodesk MAP files.

Engineers Denver airport keep the maze of immobilized with a cluster of Autodesk products – including AutoCAD 2000i, MapGuide, Autodesk Map, Autodesk Land Desktop, Autodesk Survey and Autodesk Civil Design. Dixon department uses 166 gigabytes of maps, drawings, plans and other documents available “on line” for airport personnel and airline. Behind the back-end Oracle system, networks operate on a “mix” of Unix and Windows NT servers with a Windows interface for users.

The so distant location was chosen to avoid noise impacts to developed areas while took into account future extensions. The 130 square kilometers occupied by the airport are almost twice the area occupied by Manhattan and is a little larger than the city of San Francisco. The land was transferred by the Adams County County to Denver after a vote conducted in 1989 and increasing to 50 percent the size of the city. Aurora city, near the airport, suffers large crowds due to traffic going from Denver to AID Freeway passing through it.

International Airport Denver, DIA, is characterized and distinguished by the fiberglass roof in white, aesthetically designed as reminiscent of the snowy peaks of the nearby Rocky Mountains.

The double curvature of the structure evokes images of flight and profile of the wings of a bird. In addition the use of fabric stretched over a structural frame construction echo fuselage of the first aircraft designed by the Wright brothers becomes.

The catenary system supporting numerous peaks that make up the roof of the airport is steel wires, similar in design to Brooklyn bridge.

DIA is also known by a glass pedestrian bridge connecting the terminal with Concourse A that allows travelers to see the different layers of transport at lower while offering stunning views of the Rocky Mountains westward levels and highlands to the east. 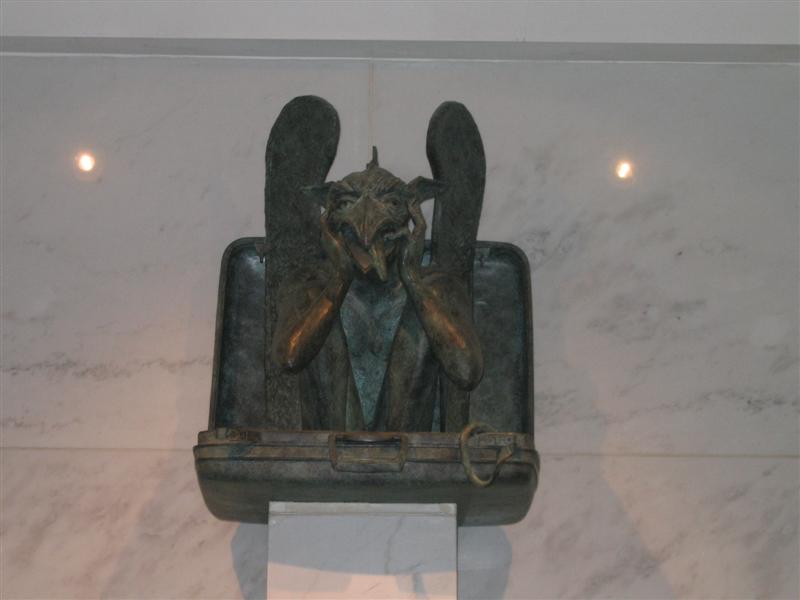 Gargoyle on top of a door

Both during construction and after its opening, the airport has used part of their budgets to the decor.

Gargoyles hidden in suitcases decorate the top of the exit doors in the offices of baggage claim, the broker Jeppesen Terminal and Platform A generally held temporary exhibitions and numerous works of art are present in the underground train linking the main terminal with the various sub-terminals.

The terminal is divided into east and west terminal by terminal arrivals or departures are both connected to three halls, A, B and C with 138 gates. These lobbies are reached by a passenger bridge or using a subway system. All these terminals have been expanded over the years and between the plans included the construction of a station for the FasTracks commuter line. 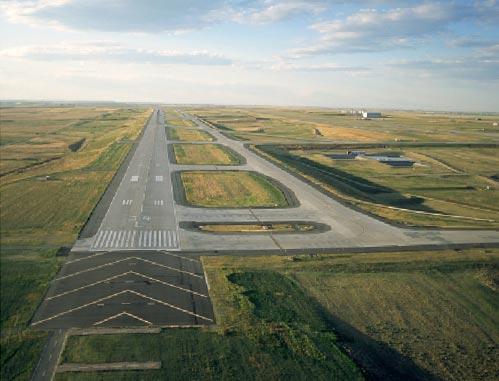 Five tracks have a length of 3658 meters and a width of 46 while the sixth length is 61 4,877 meters wide. The approach of the aircraft to each of the tracks is controlled allowing sophisticated instrument systems, in the north-south orientation, parallel landing four aircraft at a time, even in conditions of low visibility. None of the tracks intersects, minimizing jams or collisions between aircraft.

The 16R / 34L, is the longest track for commercial flights in North America, can receive and accommodate the new generation of large aircraft such as the Airbus A380. In July 2004, the track was awarded the 2004 Award for Achievement Project Management Association of the Construction of America (CMAA). The award category is for public projects worth over 100 million dollars.

The air traffic control tower in the Approach Control Radar guide aircraft in an area up to 72,50 km from the airport and an altitude of 7300 meters. The tower is about 4.80 km south of the passenger terminals.

The high control tower, 99.50 meters, is located next to Terminal C, the northernmost of the airport terminals and offers an unobstructed view of all tracks. 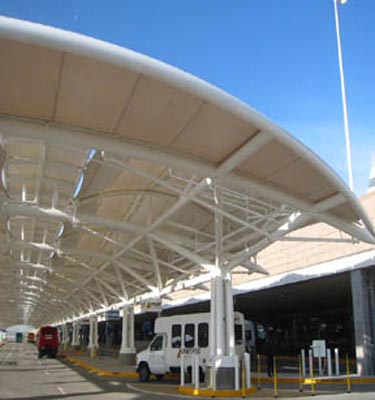 The system offers a place outside pavilions covered waiting areas for passengers of collection and the splitting of the day. The area consists of two buildings 800 meters long which are adjacent to the rebels in the east and west terminals.

Its design must consider several challenges:

For starters, the drink should meet the height limits designed to allow the view of the nearby Rocky Mountains, also the location of the canopy on top of the existing road structure limiting their weight and restricting support columns, They must be placed at intervals of 18 meters.

The movement of emergency vehicles requires a minimum clearance of 4.60 meters and a central opening for natural ventilation of fumes and gases.

Given the climate of Denver and the potential for heavy loads of snow cover during the winter months, the design also had to accommodate the accumulation of snow and the shedding of it to melt.

The architect Leo A. Daly faced these issues by creating a light structure of glass fiber Teflon-coated stretched over a steel frame painted white. The smooth curvature of the main steel pieces rest on a “tree” formed by four columns steel located in each of the support points, creating a stable base for the span beams and providing a hidden channel for drainage, electricity and fire sprinklers. The bases of these columns are protected with concrete.

Above each piece of curved steel main support two secondary rods supporting the stretched fabric forming the cover and protects the pedestrian islands and lower paths. The translucent fabric produces an energy-efficient solution: create a bright waiting area for passengers, dimly lit during the day and acting as a reflector to create a soft and uniform light night. 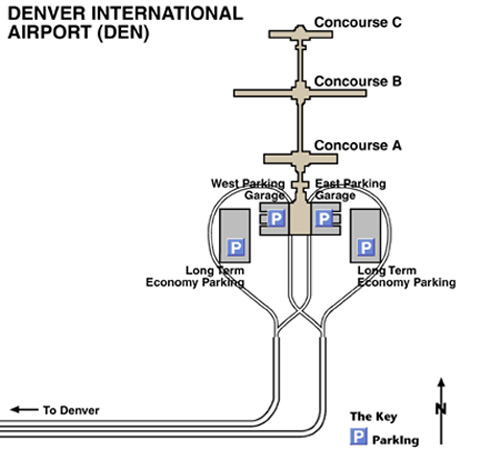 There are many parking options at the airport, including two short-term parking, located just east and west of the Terminal. There are more than 7,000 spaces in each garage. There is also outdoor parking for long term parking located south of Peña Boulevard on 75th Avenue, and equipped with a shuttle.

From a distance and at first sight Denver Airport resembles a “encampment” like indigenous formerly inhabited by indigenous tribes in the area. A version on the first project for the airport, which explains that during its construction could not stand the strong winds blowing in the area and it was necessary to return to the old ways of the “tents” indigenous, modifying the original project and therefore shooting the initial budget.

Amedida we approach we can see that form, similar to fabric stores, were done with a tensile structure that shelters prismatic volumes in predominantly steel, glass, concrete and high complexity technology, feature new stylistic trends. The marquees of the work done to share the architectural materials and sophisticated techniques, becoming true structural support to the natural forces generated abroad. 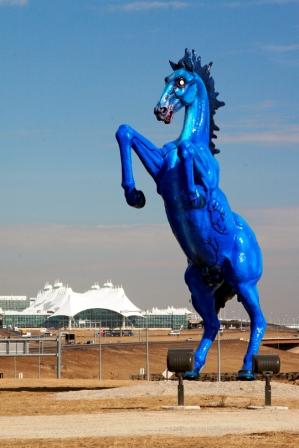 Numerous works of art are displayed throughout the grounds of the Denver International Airport. “Mustang” New Mexico artist Luis Jimenez was one of the first commissions of public art commissioned by the airport in 1993. It is a sculpture of glass fiber blue with glowing red eyes. This horse standing on its hind legs measuring 9.8 meters high, weighs 4,100 kilos and receives the traveler approaches the airport.

The airport has supporters and detractors; the latter say it is an absolutely strange place where you feel bad having to watch the horrifying pictures showing their dark wall full of symbolism.

In August 2008, a set of 2 MW solar power was installed at the airport. This photovoltaic system, which occupies 7.5 hectares in the entrance area generates over 3 billion kilowatt / hours of clean electricity annually. This solar project is one of the largest solar installations in public airports United States supports the commitment of Denver to environmental sustainability by reducing carbon emissions into the atmosphere.

Designed and installed by WorldWater, the system uses more than 9,200 Sharp solar panels. These panels use a single axle system that tracks the sun during the day for greater efficiency and energy production.