Designed by Niemeyer in 1951 as his family home, Das Canoas House is considered one of the most significant examples of modern architecture in Brazil and is well recognized by specialists in art history as a synthesis of modern architecture and authorial self-creation that flourished in Europe and in America. Das Canoas House now is open to the public, offering visitors a permanent exhibition on Oscar Niemeyer.

The most interesting feature is the fusion of organic architecture and minimalist architecture.

As it is an obvious tribute to the Farnsworth House, Das Canoas puts geometric regularity in crisis, but does not alter the formal purity. From Mies design to Niemeyer’s Das Canoas, its possible to see the evolution of reinforced concrete into a modern building material. The flexibility of the material was newly assumed and architects began to exploit this, many years after its resistance to bending was determined.

The house is located in Canoas, in Barra de Tijuca, a suburb of Rio de Janeiro.

It was built to on the slope of a hill overlooking the bay, and suggests panoramic images of the same. Historians and art critics define the house as one of the most significant examples of modern architecture.

Niemeyer said of the matter: “My concern was to project the residence freely and to adapt it to the unevenness of the field without modification, making it into curves, so the vegetation could enter them without separation or departure from the straight line.”

“And I created the living spaces to be in a shadow, to avoid the need for curtains and allow the house to be transparent, as I preferred.”

Niemeyer’s intention was to design his residence in absolute freedom, to shape the enviroments smoothly and adapt to irregularities in the land: in this way only could he obtain the feel that the vegetation penetrated the residence.

Canoe residence is made up of two plants are located in the lower the private environments, while at the top are the spaces. The interior decoration was designed by Niemeyer himself and his daughter Ana Maria: it gives the atmosphere a warm atmosphere of familiarity, which can be captured in the original curves in all corners of the house.

The windows of the rooms are characterized by the outgoing profile and look at the subtropical vegetation, the wonderful nature of the area that stands out is the most in the eyes of the observer that conditions for the entire process of project. Nature is not separate or artificial, but it is free and is suggested in all places of shelter, such as in the broad granite outgoing entering the room from the garden, almost emerging from the soil.

Beside the pool you can admire the sculptures made by Alfredo Ceschiatti, Brazilian architect friend, the elegant undulations of the female bodies are perfectly adapted to the context of fluctuating forms.
However, it is very different relationship between the house and the landscape as we move into the area night here Niemeyer designed spaces such as shelters, equipped with the small windows that show only a little freshness of green outside.
The shape of the architectural elements, almost all made with reinforced concrete, plastic generates a spatiality that favors merging harmony between internal and external environments and emphasizes the sense of belonging in nature. The roof winding, restrained by pilotis also helps to underline the progress of housing and emphasizes the rhythm of the fluid glass facade which, among other things, allows them to enjoy a lovely sea view.

The construction is discovered as a thick horizontal twenty or thirty centimeters borne on a slender pillars. 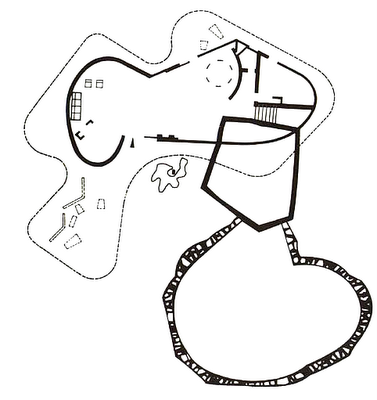 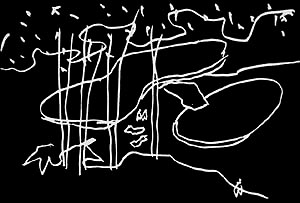 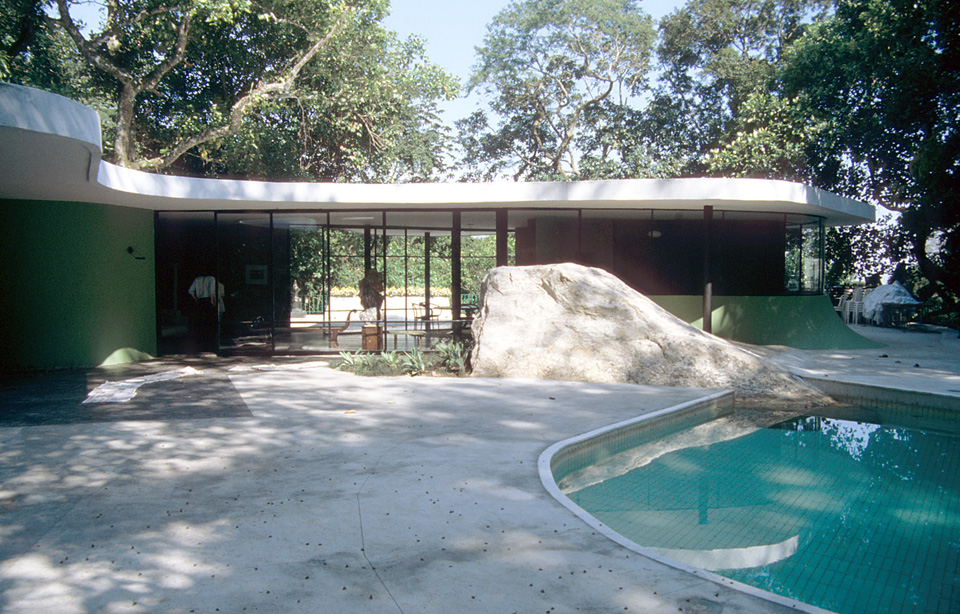 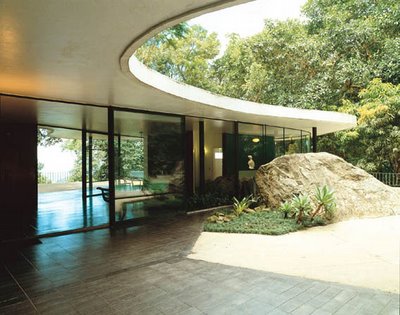 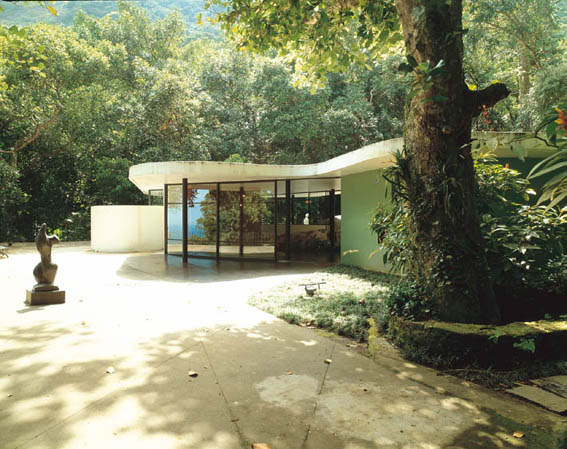 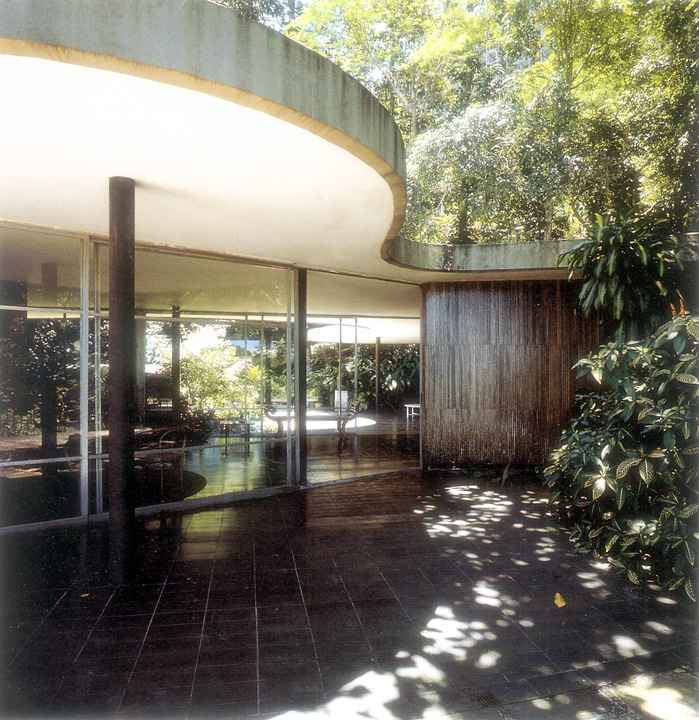 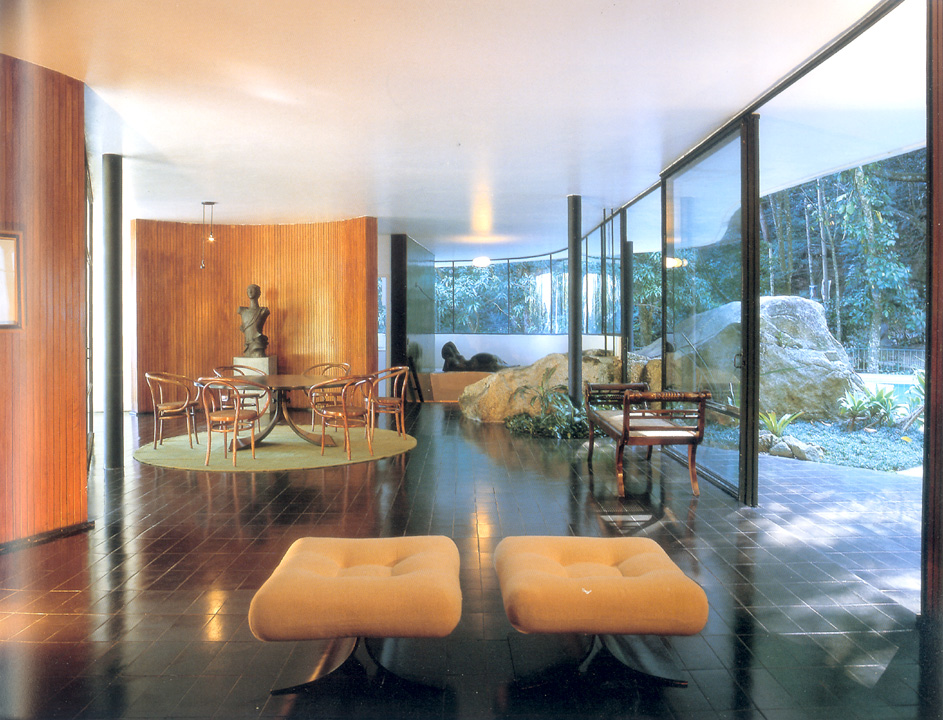 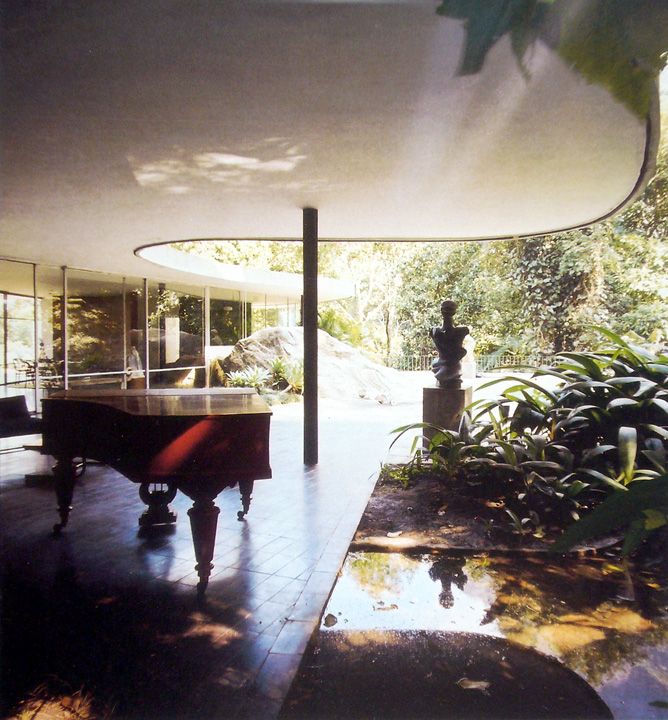 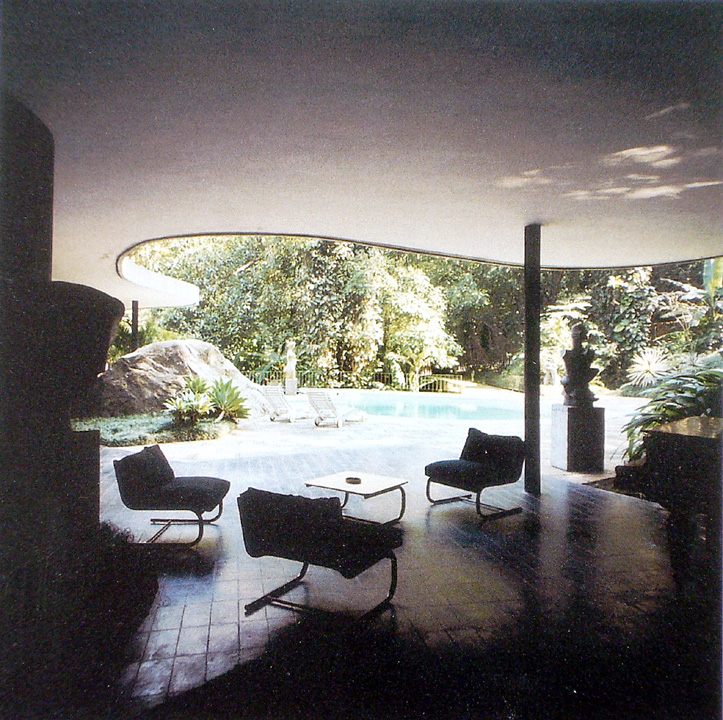 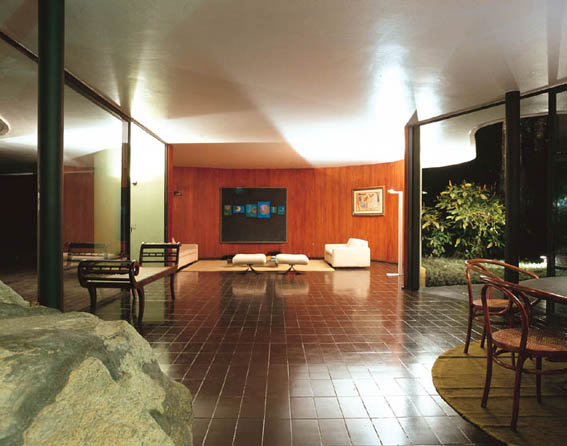 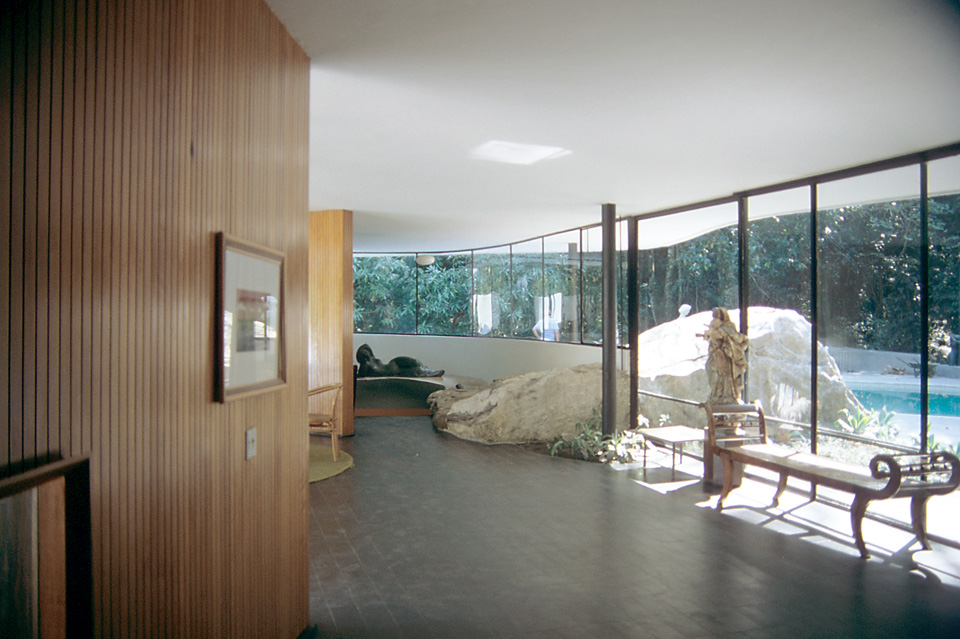 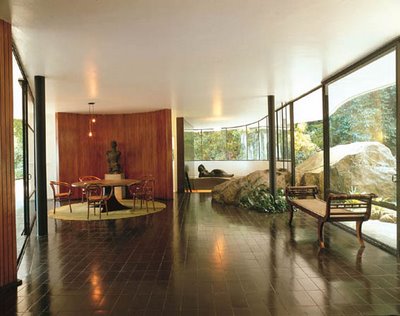 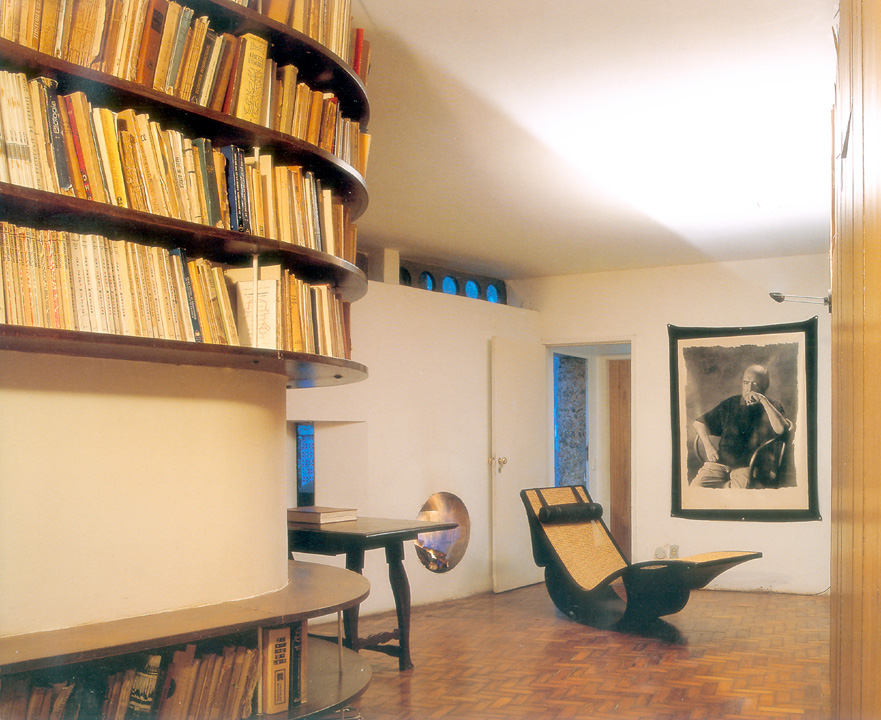 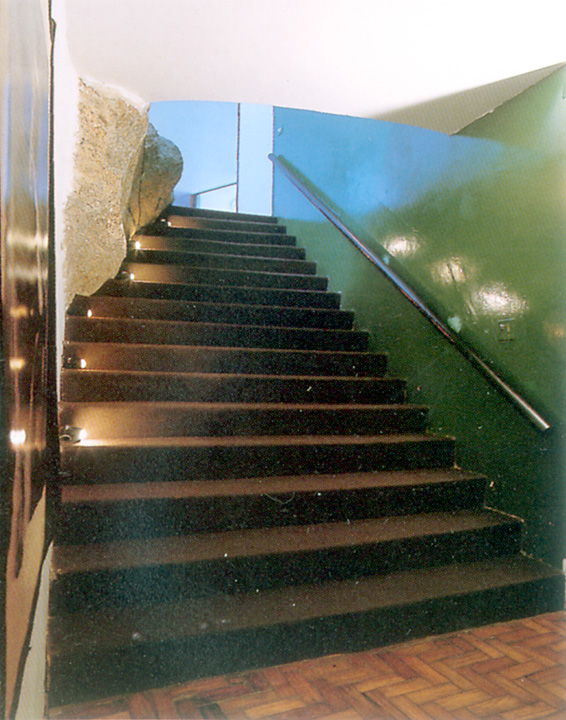 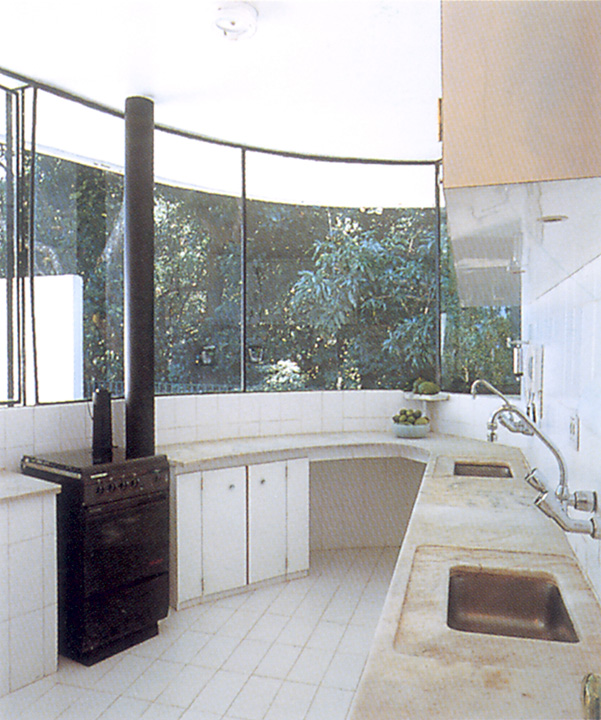