The German colonial Government built the first airport in Tanganyika at Kurasini in Temeke District in 1918. It was called Mkeja Airport.

Another airport known as Dar es Salaam Airport, Terminal I, was built at Ukonga area, as the former could not meet the demands. Therefore theGovernment of Tanzania extended the airport to Terminal II in 1979. It was inaugurated by Julius Nyerere in October 1984.

The airport is located and serves the city of Dar es Salaam, the largest city in Tanzania.

Public buildings usually use their facades to interact with users and the environment where they are located, that’s the most immediate way of communicating with the “outside” world and set the image that will have of that particular building when they picture it on their minds. This is not the case of this building where in fact, the “trees” and their corresponding canopies of concrete, determine the appearance of this structure even more than the facades, which remain more anonymous in their glazed shearing.

A metaphor of the forest is appears unavoidably in the columns and ribbed roof plates, and this despite a fundamentally rigid geometric layout.

The mostly glass wall that divide the interior of the airport in contrast with the opacity of the roof makes the view flow in the horizontal direction, just as it would happen in a forest, and just like in those the small separation between the roofs allows some axis of light to penetrate the space from above like it would happen with natural trees where light will eventually find some spaces to go through an get to the ground.

There are seven locations for aircrafts in direct contact with the 15,000 square meter terminal and 15 more docking points positioned at some distance from the structure.

A tree-like reinforced concrete roof covers the lobby and the waiting area situated on a mezzanine. This allows the lobby to have a double-height, confirming Andreu’s continual emphasis on space and airlines in his designs.
The columns are situated over a grid of 13×13 meters with a diamond shape with its notched side facing the parking lot (500 parking spots aviable) and car or bus arrivals, the square pattern tends toward a complete outer point near the passageways to the aircrafts. In other words, despite starting out with the static forms of a square, Andreu articulates the plan so that a natural progression toward the points of departures is implied in the architecture itself. Aside from giving a sensation of comfort and open space to travelers, another one of the strong points of Andreu’s project for this airport design is precisely this repeated emphasis on orientation and the movement through spaces, even though the reduced dimensions of the installations would have work out well without such considerations. 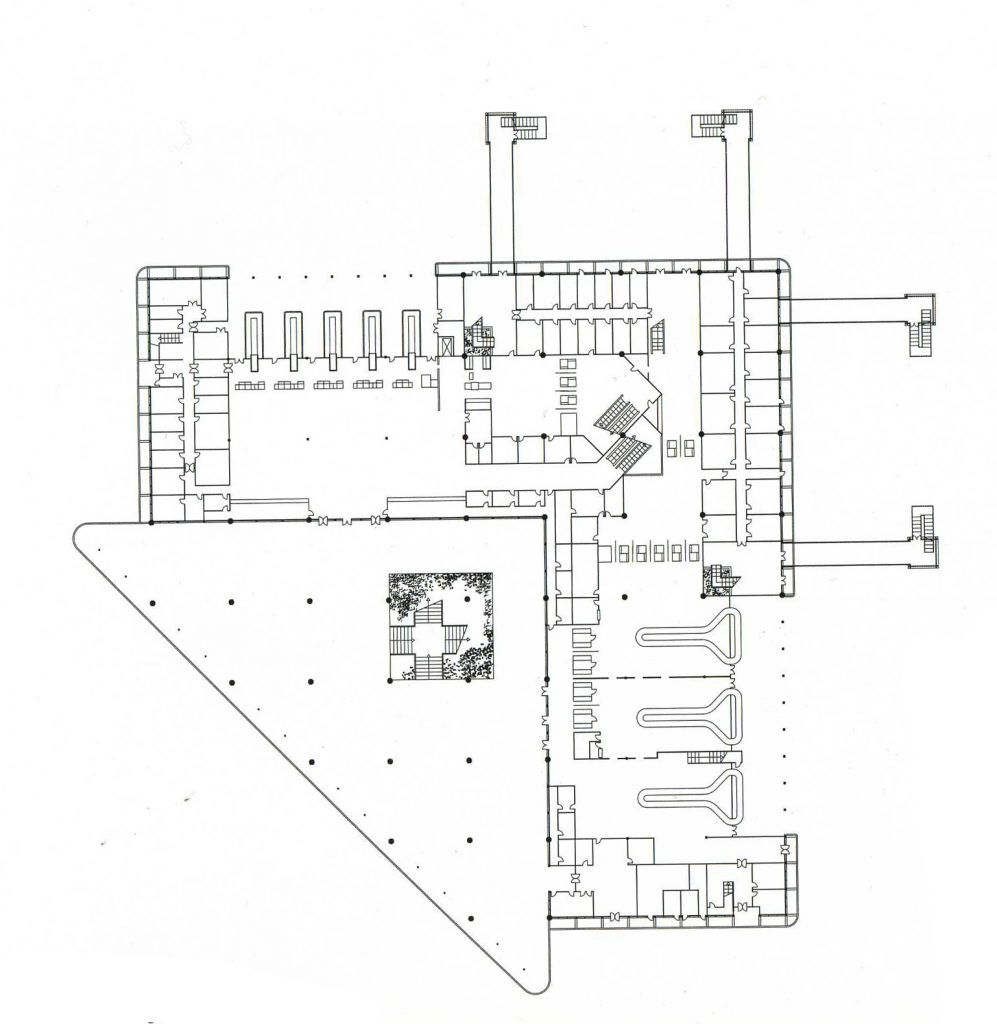 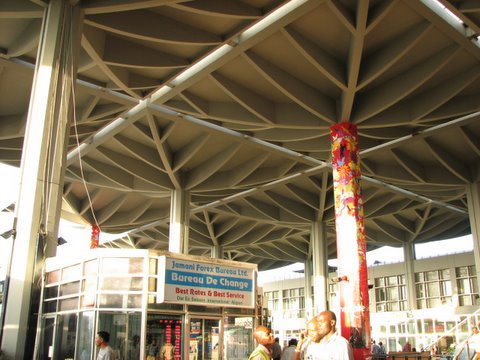 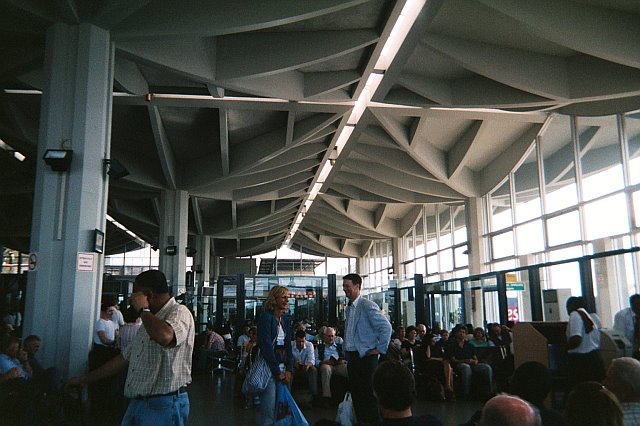 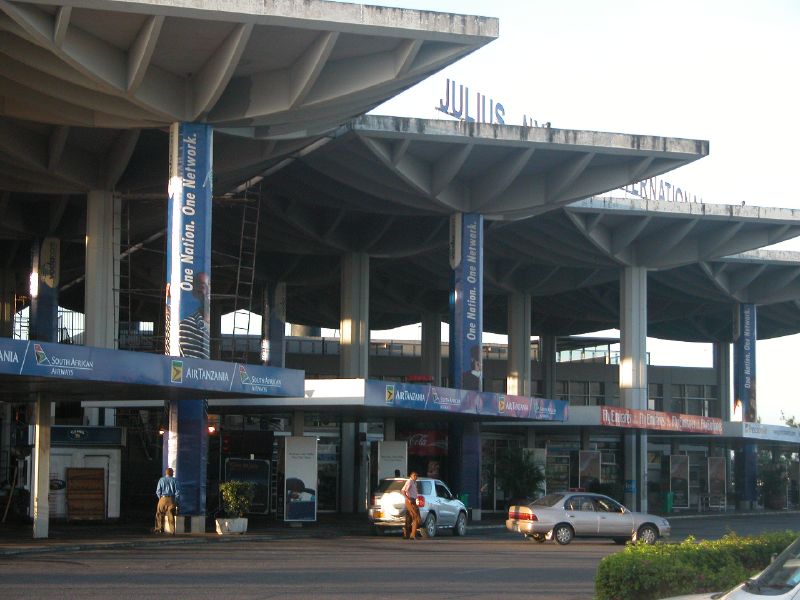 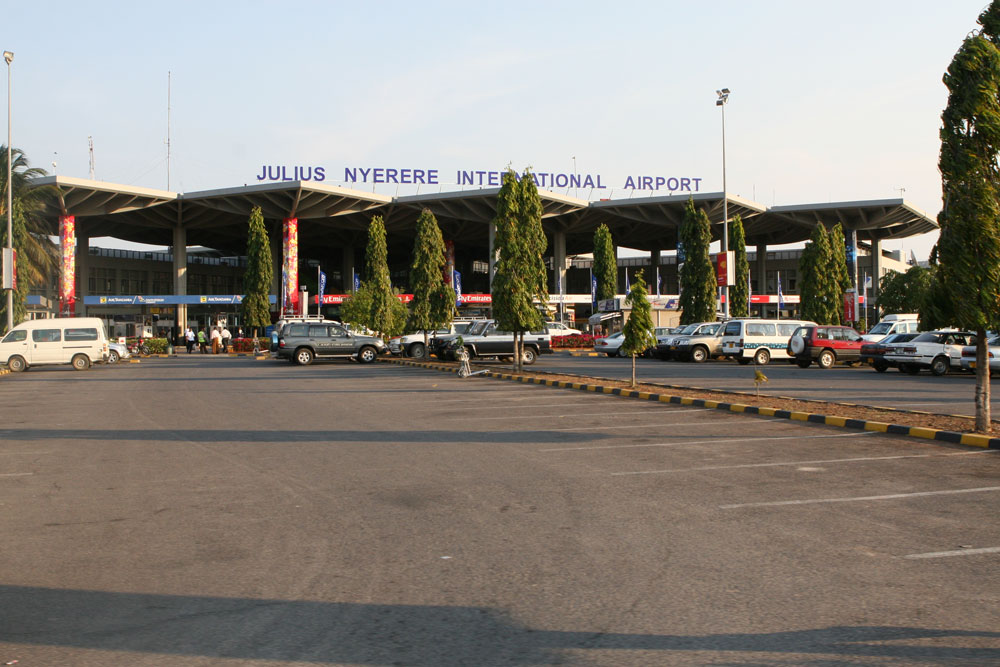 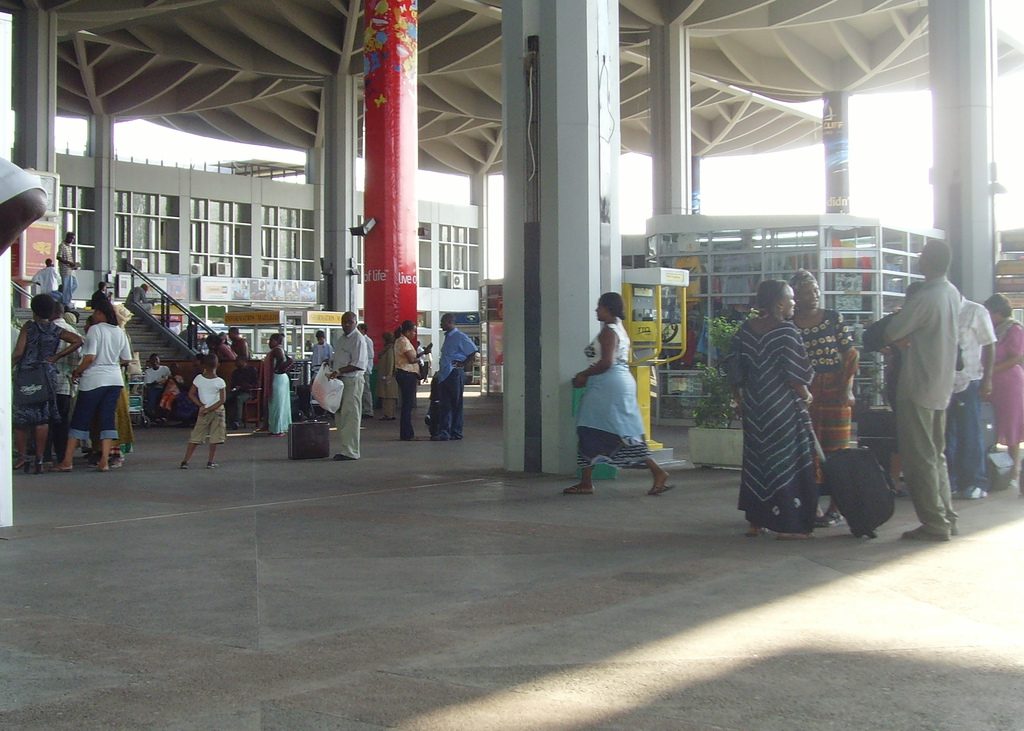 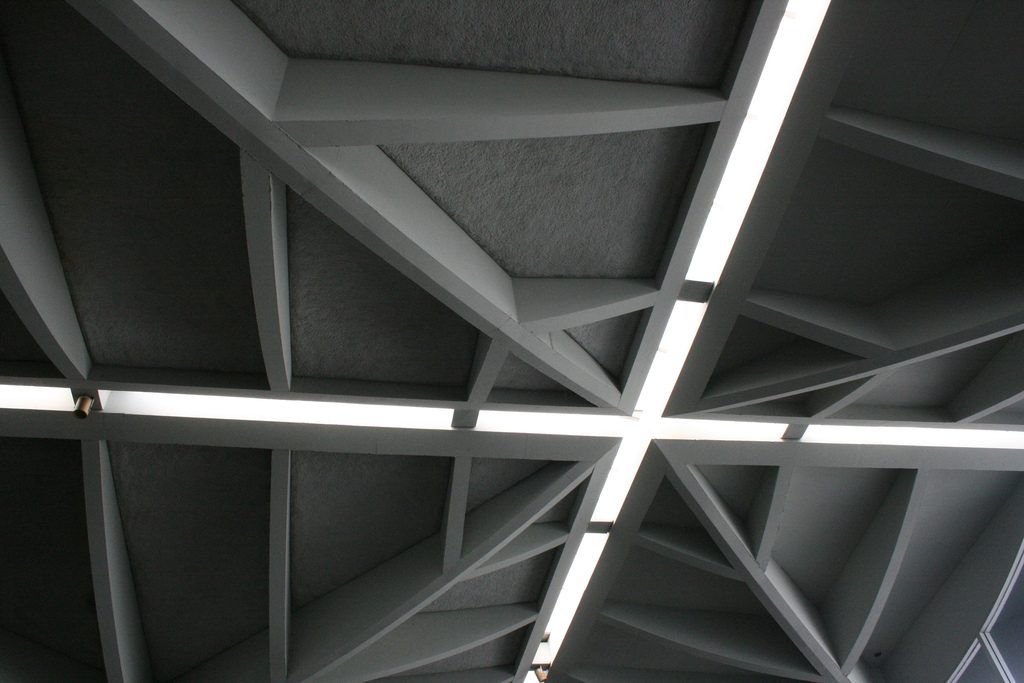 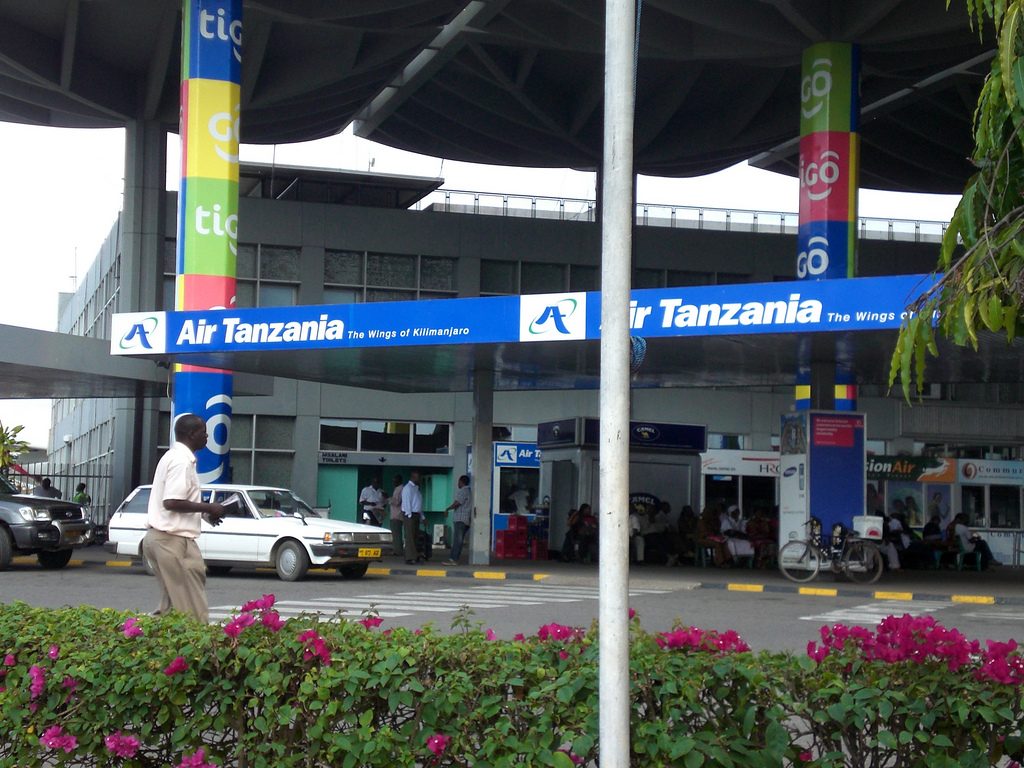 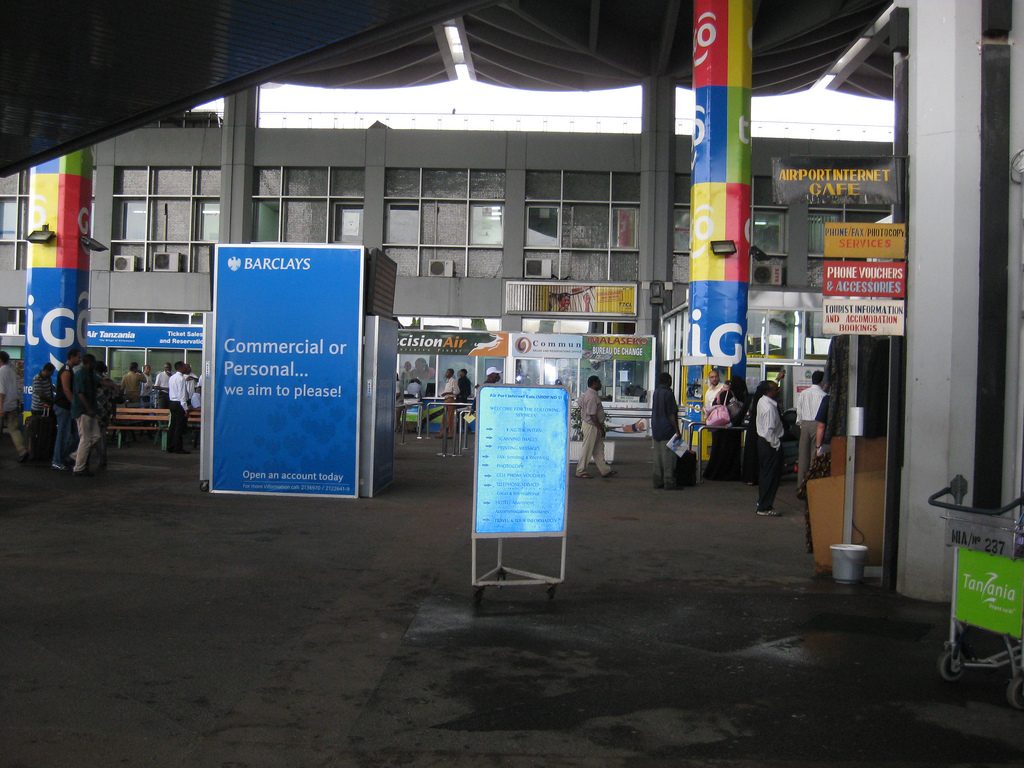 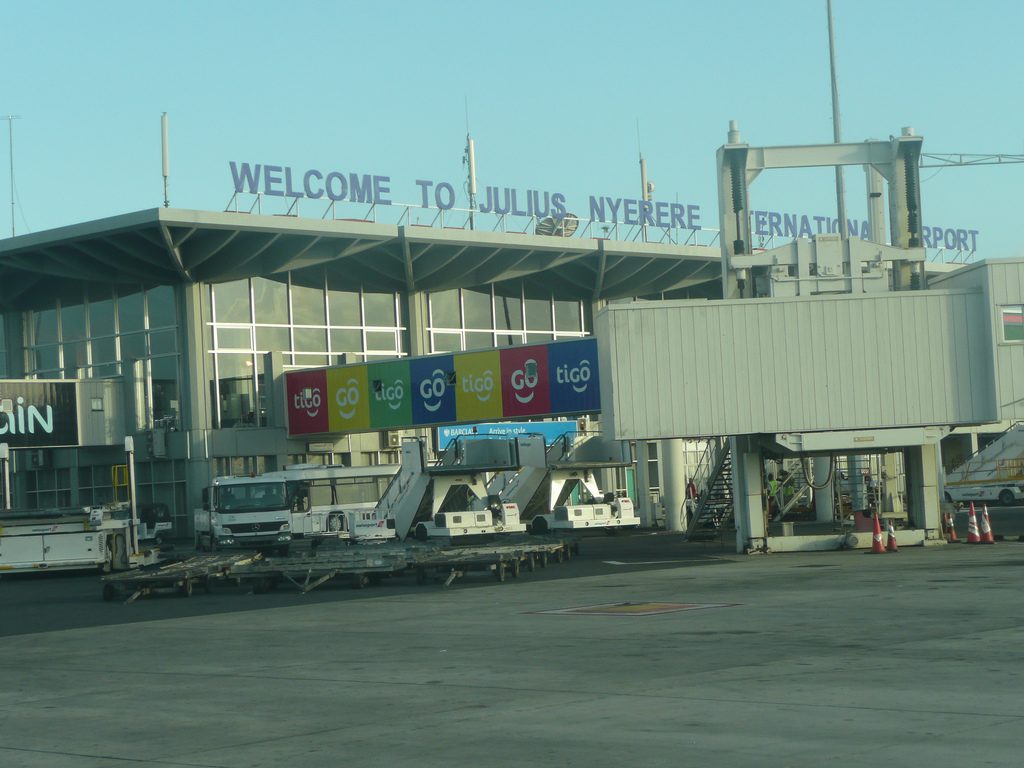