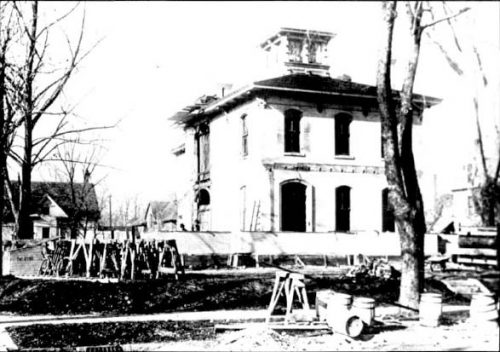 It was 1902 when Susan Lawrence Dana, activist and member of high society in Springfield hired a rising young architect from Chicago to remodel her family home. He was an architect of 33 years he was told to spare no expense. The result was one of the best Prairie Style houses Frank Lloyd Wright, which included an original design furniture, worked glass doors, windows and lamps.

The original house, Italian style, is no longer visible from the outside, although some features still remain inside.

In 1944, two years before the death of Susan Dana, the editor Charles C. Thomas purchased the house with all the furniture that Wright had designed for her, beginning to use as an office of his company until 1981 when the State of Illinois Dana bought the house with all his furniture and began the work of preservation and restoration, showing to be known as the Dana-Thomas House referring to its two owners.

The rich history and architectural importance of this meticulously restored residence makes it a jewel for the city of Springfield.

It is located on the corner of 4th Street and Lawrence Avenue, specifically the number 301 of the latter, a few blocks from the Capitol in the city and just minutes from downtown Springfield, Illinois, USA.

Dana-Thomas house contains many of the design concepts of Prairie Style, becoming a window which displays the same characteristics, low horizontal and gently sloping roofs, continuous bands windows, wide eaves, a large central fireplace and a large floor clear. The concepts of “more room” with open plan without boxing, the unit “inside-out” or “form follows function” is applied throughout the house.

This house is probably the best preserved of the houses of the Prairie School of the architect and exemplifies many of the innovations in design that Wright was doing in their quest to redefine the style American family home.

With the new design the house was to have 35 rooms, 1200 square meters of housing and 288 square feet of garages.

The old house was no longer fully visible from the exterior and interior retained only one room, a lounge with Victorian fireplace, was left untouched in memory of the father of the owner.

The house was designed for use by large groups of people, lending itself to the needs of Susan who used it as a meeting place for both charities or elegant social events. 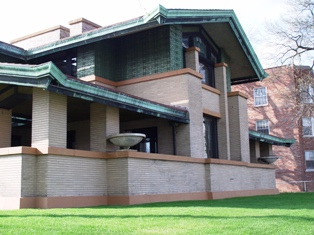 Outwardly notice many changes in ways that reflect the sixteen levels that exist within it. For the many flat roofs Frank Lloyd Wright designed copper complex channels whose corners are set in a faux Asian architecture, particularly Japan, for which both Wright and Susan Dana felt a great admiration.

At the top, the facade is decorated with a frieze of terracotta and plaster coating on a metallic green color. The rest of the building is built with bricks long and narrow, horizontal boards which have been carefully crafted so that the bricks appear to float at the same time to emphasize the horizontal plane at stake with the horizontality of the roof.

The driveway is designed as a large Romanesque arch, half a point, around the door with a rectangular band of windows on the top that accompany the arch form and whose crystals are hand crafted.

Frank Lloyd Wright, coordinated the design of the 250 stained glass windows, doors and light panels of the house, as well as over 200 light fixtures. 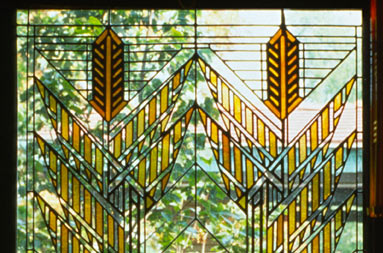 Wright developed in this house a windowed system colors so that from outside could not see inside, but those who were inside if they could watch the external environment. In this way they avoided the curtains, an element that Wright as an obstacle for two reasons, first because it prevented the interior-exterior relationship as sought by the author, while on the other side was lost in the detail of the windowed view.

The Dana-Thomas house is one of the largest collections of glass art that can be seen in a house that Wright designed.

Noting the plans is that plants do not contain corridors, rooms are arranged so that it is necessary to go through other rooms to reach the desired, creating a shared experience of the spaces of the house and contrary to the trend in architecture of the last two years prior to 1900 in which the architects designing a lot of runners and gates emphasizing the functional separation of the environments and individual privacy. 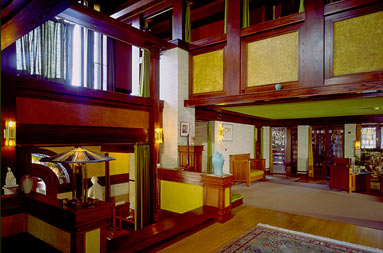 In the Dana House are not only brokers but all rooms including the master bedroom, have more than one exit or entrance, the rooms are in a row, arranged in series. The result is the best way you could describe a family relationship between the living rooms of the house, a direct reflection of the idealized vision of the Wright family had developed around the table and fire.

The midpoint of the entrance arch was used by Wright’s work not only in brick and concrete but also in the shape of the interior and exterior doors and the main stack.

The decorative details of this house are truly stunning, as the symbolic and allegorical source called “Moonchildren” or the creations of artist Niedecken with butterfly-shaped chandeliers and a mural contains images of flowers typical of the grasslands, as sumac, goldenrod and purple aster. In the first level lobby appears “” Flower in the crannies Wall “, a statue of Richard Bock.

The house tour is rotated about a pair of fireplaces that are the heart of it. Wright developed the final design of the house Dana as a pinwheel around the fireplace, showing that this type of development it can be applied even in the case of large houses and complicated design.

In the Dana House are not only brokers but all rooms including the master bedroom, have more than one exit or entrance, the rooms are in a row, arranged in series.

In the house there is a lower level, below ground, where there is a library with fireplace, game room, cloakroom and security cabin.

The library was often the scene of children’s parties, while the events for adults were held in the galleries of the main floor. 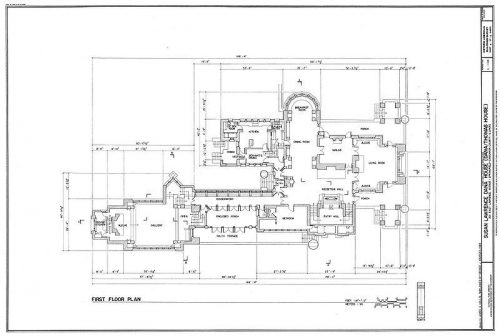 Here we find the impressive reception hall, the “greenhouse ferns, a large living room with capacity for forty guests, the breakfast room, living room, the room Victorian winter garden, a terrace summer, a bedroom, kitchen and a few steps the corridor.

This room on the east side of the house was used by Susan Dana for their social and artistic gatherings. The tables located in this gallery were designed by Wright to exhibit the collection of watercolors and paintings of the Japanese housewife.

The lobby ceiling rises impressively to the second level. It is the first time that Wright used the open spaces on two levels.

On the north side of the lobby there is a gallery original “greenhouse” with skylights, where ferns cascading from their pots. This part of the house many times it was called familiarly “fernery”

The Victorian room is located on the west side gallery, enjoyed the fireplace and a loft for musicians. This room is a T-shaped space with the roof on the sides and top front of the fireplace and an open area with only a pair of glass doors on each side. 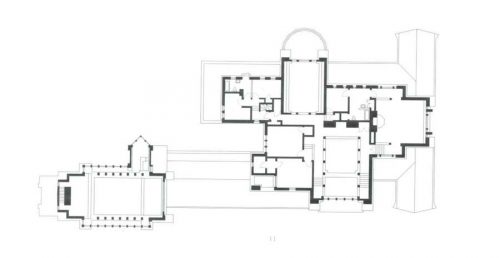 On this floor there are two balconies to the orchestra, the master bedroom, other rooms of the family and service, all bedrooms with adjoining bathroom.

Here is repeated the plane of the living room below, where the fireplace is located between the two beds that join at the back of the set of shared beams of the canopy.

Walls six feet high provide privacy to the courtyard where the large pool is 10 meters in length, its location, east, reflects the entire house.

Susan Dana wanted large spaces for parties and social gatherings, so that Wright used structural steel in the construction of the roof, tall and great development in the dining room, foyer and gallery. The rest of the structure was built with bricks and cement.

Curved wooden ribs that support the vaulted ceiling is supported by a pair of beams placed on each side structurally integrating space in both directions.

Original structure of the house only stood the marble fireplace in the living room Victorian style.