Gropius was not only an architect and designer, was also a sociologist and left in their buildings, the rational analysis of human needs in housing. During his tenure at the Bauhaus applied this analysis to urban dwellings, they could offer a better quality of life for its inhabitants, sun, space and light, surrounded by trees and green areas without losing its urban character.

When he left the Bauhaus and in his Berlin studio focused on planning and housing blocks colonies. The importartes issues already raised in Colony Törten on the standardization of construction, the rationalization and standardization became the leitmotif of the work of Walter Gropius in the 30s. Similar to Le Corbusier, Gropius saw in building construction to decongest the possibility of building density, improve hygiene and build more economically, a position that earned him much criticism in specialized environments of the time.

In 1928 Gropius won a contest sponsored by the city of Karlsruhe for a colony in the district Dammerstock, the second prize went to Otto Haesler and can perform some of their ideas to the project some blocks of five-storey houses and coordinating the work of the eight other architects. It was the first time in a competition in Germany was prescribed the construction of single family homes and multi-family townhouses row. The guidelines were very strict and concrete, including even the details of the plant, which the architects left them a very narrow range of creativity.

La Colonia Dammerstock rose in the district of the same name, in the city of Karlsruhe, Germany. Karlsruhe is a princely city of Baroque and geometric design foundation, whose radial axis is generated in the palace. In the early nineteenth creates a north-south axis where bourgeois institutions are installed, the Allee Ettlinger, cut at its southern end by the train station. South of the railway line in 1928 there nothing urban, neighborhood Dammerstock based precisely this part of town, right next to Ettlinger Allee.

Gropius was commissioned to complete planning along with Otto Haesler. He was also responsible for the project in three blocks of multi-family housing and multi-family houses. Participants also some local and foreign architects, including Wilhelm Riphahn Cologne. The aim was “to create healthy and functional properties that correspond to the standard practices of the family social media” in Germany in those years.

Of the 750 homes planned at first, for financial reasons, we could only build 228.

The entire complex so impressed by the consistent and clear, rectangular blocks, low background and various lengths depending on the location on the lot, with glass surfaces, housing, oriented towards the sun and arranged as a series of open houses, at right angles to the street, cross ventilation and ample green areas located between the blocks. With this arrangement and with the same density, room could have more free space, and with a better angle of incidence of the light, a more intense sunny.

All this development, block parallel bands in most cases have the front giving the streets, seriation and classification in the extreme, irritated contemporaries, for his excessive rigor and a tendency to make the inhabitants impositions housing.

The design elements were common to all buildings of the colony.

A total of 23 different models of thought houses. Those Gropius proposed for the central rows of the neighborhood are two-storey detached houses with an area of ​​75 square meters. These are homes between party bearing, with a corridor of about 5 meters and a depth of 7 meters higher in the upper floor is covered with what the access area.

The stairs are steep with allowing to be placed in a single stretch perpendicular to the medians, forming a compact core in the center of the house that the spatially defined. The oppression that causes the small size of the rooms is decompressed by the numerous spaces around the staircase, giving respite to the building.

This four-story building is located on the eastern fringe of the neighborhood has 32 homes that are accessed through the eastern side galleries. As in the single-family homes here also perceived creep of spaces around a central space. In this case, along the corridor and opposite the entrance of the house, there is a widening of the corridor, supported at its corners by a metal uprights and cross the floor to ceiling building. These feet, a wire mesh frame provided qualifies the balcony and should have allowed the growth of vines, creating a rhythm of vertical green stripes in contrast to the horizontal runners.

The small apartments are 49 square meters, distributed in a room protected by a terrace and a bedroom to the west and bathroom, kitchen and access onto the entrance corridor to the east.

In the variety of housing Dammerstock accompanied by a single framework, thereby reaching the use of elements common to all buildings of the place, windows and sills modules equal, flat roofs, whitewashed walls, baseboards in gray, flush doors with metal frames and concrete. 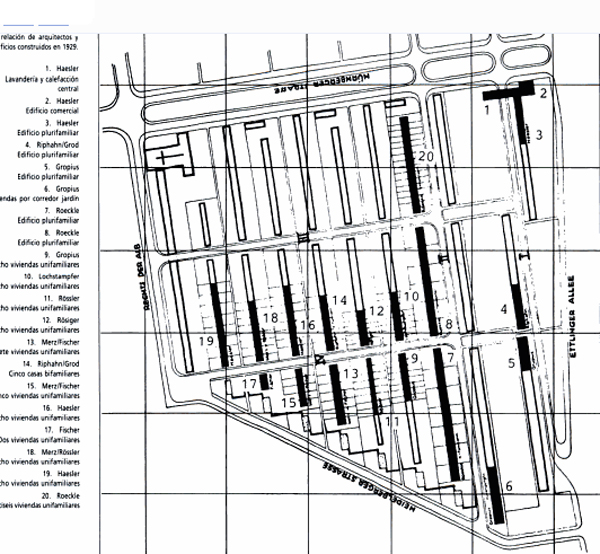 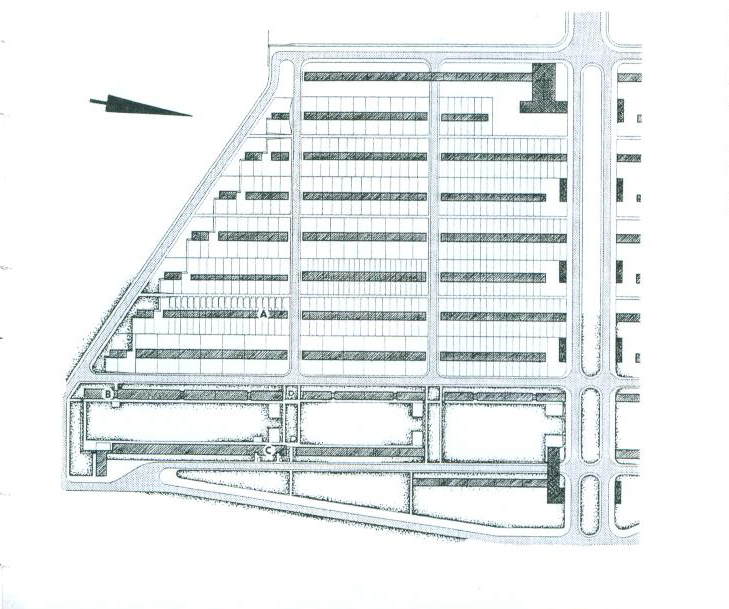 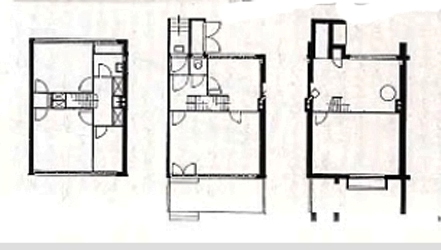 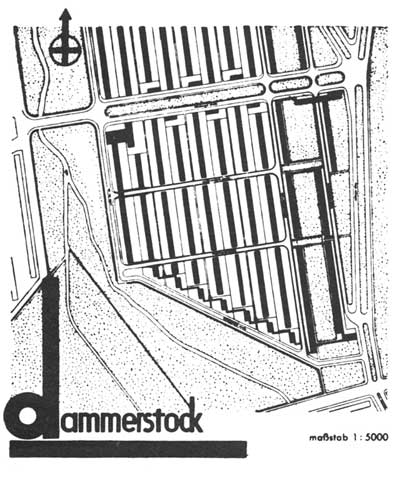 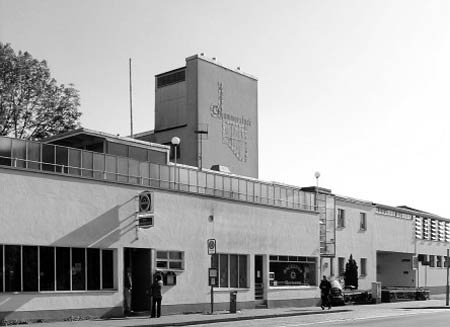 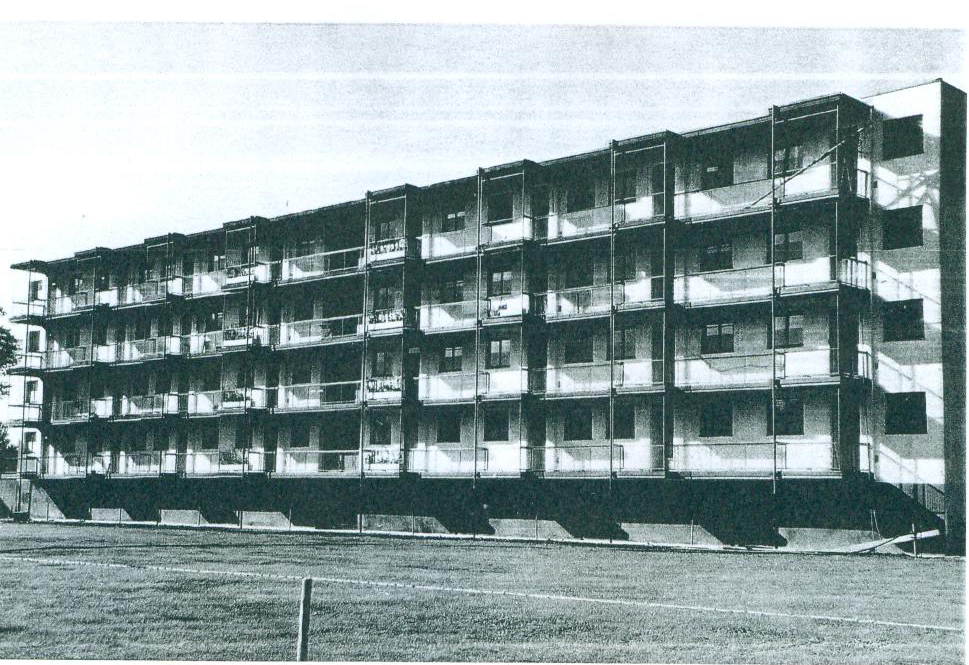 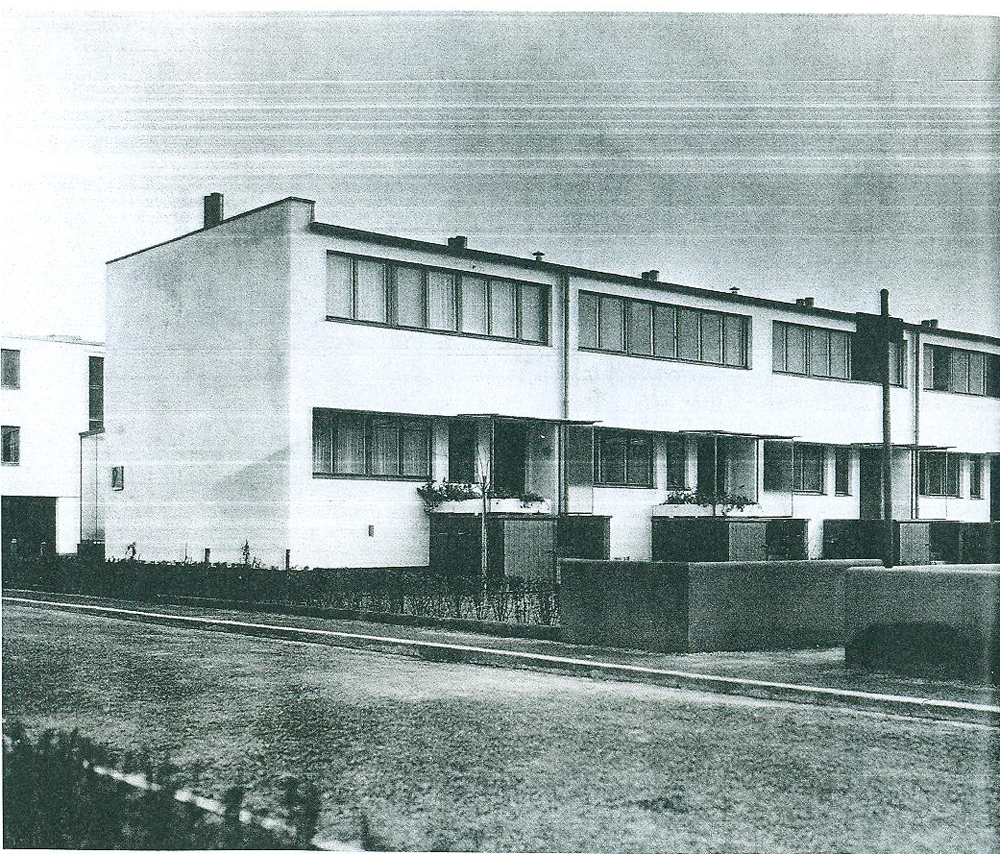 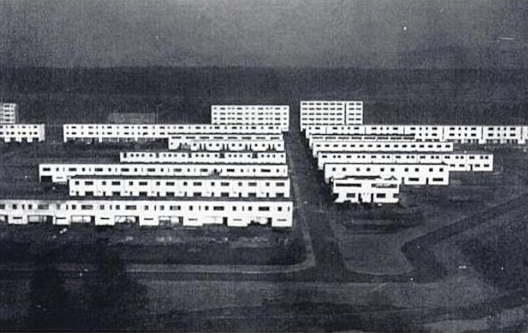 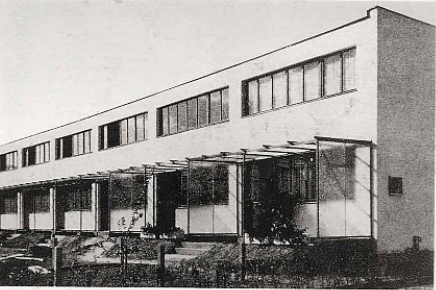 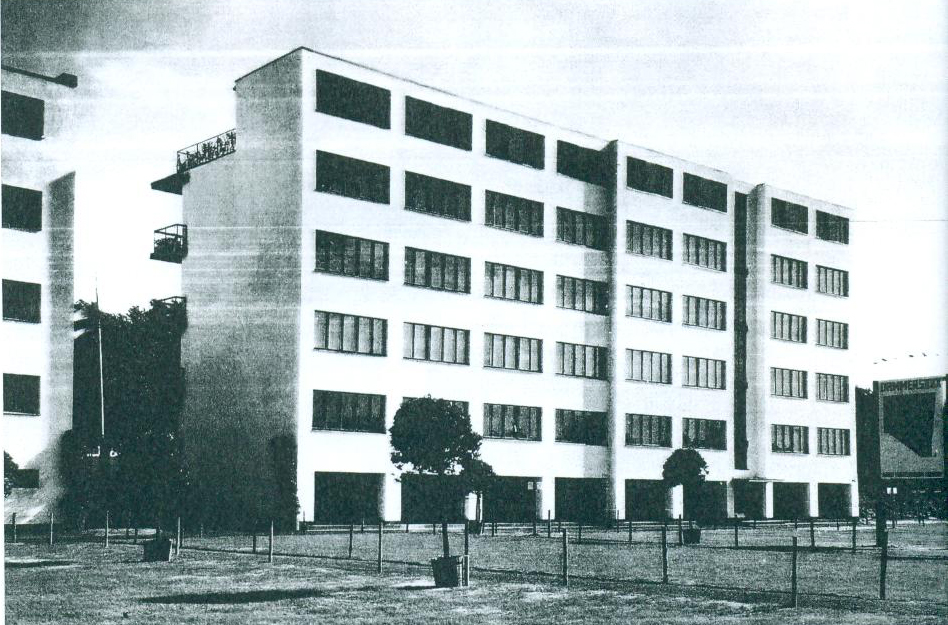 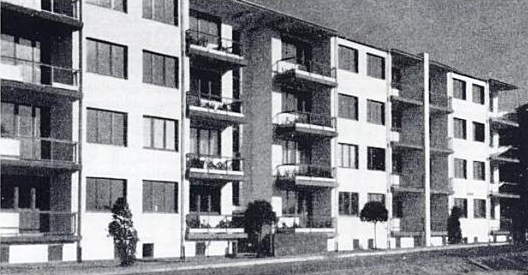 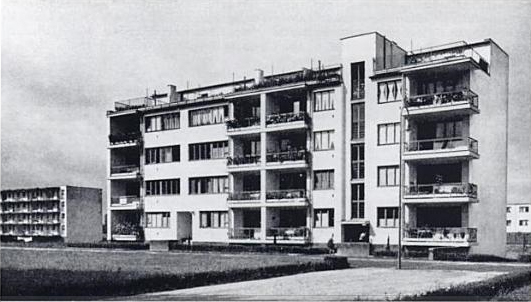