With its characteristic square base rising in two spiral towers, the Cymbalista Synagogue of Tel Aviv University and Jewish Heritage Center stand out as one of the most extraordinary architecture works of the Campus and Israel, becoming an exceptional reference point for the dialogue.

A place of prayer and a place for discussions, a synagogue and a conference room, a place where religious and secular people can meet. This was mainly the request that received Mario Botta de Paulette and Norbert Cymbalista when they commissioned the construction of a new building on the Campus of Tel Aviv University.

Nowadays, architects rarely receive commissions with objectives as clear and precise as those requested: to construct two separate spaces in function but united in the design and that express the need for spirituality that is shared by all people. “… My concept of the project was helped not only by the clear ideas of the clients about what they wanted, but also by their generosity. I firmly believe that any project resulting from such commissions should be simple and powerful … “(Mario Botta)

After consultation with the university authorities in 1996, agreement was reached on where the new building should be built, a corner in the central lawn of the campus of Tel Aviv University, Israel, where large student assemblies are held. This location ensured that the new building would be easily perceived as a new service for students.

The project through a single building fulfills two different functions: a synagogue and a conference hall.

Sponsored by Norbert Cymbalista and his wife Paulette, the Cymbalista Synagogue and Jewish Heritage Center were designed to bridge the religious and secular segments of Israeli society in an academic setting. “… it was created in the spirit of respect for tradition but also in the understanding that dialogue and acceptance of the different points of view are essential for the development of Israel as a democratic society …” (Norbert Cymbalista)

The Jewish Heritage Center functions as a center of study, culture, art and tradition. A meeting point for symposia, seminars and debates. Major scholars of Jewish culture and related domains hold weekly lectures on topics in all fields of Judaism, including theoretical and practical issues of concern to Israeli society. Speakers come from both Israel and abroad and offer their diverse perspectives and ideas. These events are very crowded and link the campus with the outside community.

From a single rectangular base of approximately 800m2 two identical square volumes are born that rotate and open in a circular way, reaching at its highest point 13.50m, communicating at the base by means of a common rectangular vestibule that invites dialogue. At the base with two entrances, there are common services and activities, such as a small museum room and a study center, well distributed around the two main spaces.

The two equal spaces are differentiated by the accessories that reveal the different functions of the two rooms. The space of the Synagogue contains sacred archives and an elegant Pakistani alabaster frame ending in a semicircular apse. The Ark of the Torah is partially illuminated by translucent onyx. A Hebrew inscription above it says “שויתי יהוה לנגדי תמיד” (“I have set the LORD always before me” from Psalm 16: 8). The other space with different furniture culminates in a podium with a curved structure and a glass.

In the upper part of the synagogue a light wooden plaque has been installed, as an “awning” that protects from the sun and sifts the natural light on the walls of the cylinder and the rectangular volume. This installation resembles the traditional canopy used in Jewish weddings, the chuppah, here permanently and poetically molded in the light.

The useful area is 660m2 and is divided as follows:

The original architectural form of the identical cone-shaped towers, with a diameter of 16.60 m, is a stone in the geometric square of the circle, on a reinforced concrete base. The squares of the plant and the roofs of the synagogue and the auditorium form a perfect cube with all sides 10.5 m. The apse of the Synagogue and the podium of the Center are the two ends of the axis of the complex.

At the top of each body the square roof creates four arched segments to let in daylight and flood the inner walls of golden sandstone, which characterizes the interior spaces.

Both towers are built using the same materials, in the interior “pietra dorata” of Tuscany with black granite soils of Zimbabwe and Verona stone on the outside. Both interiors are illuminated at the top in the same way. The roof was made of light wood from Switzerland and the Ark of the Torah is made of translucent stone from Pakistani onyx. These materials generate identical geometric spaces designed for different functions. 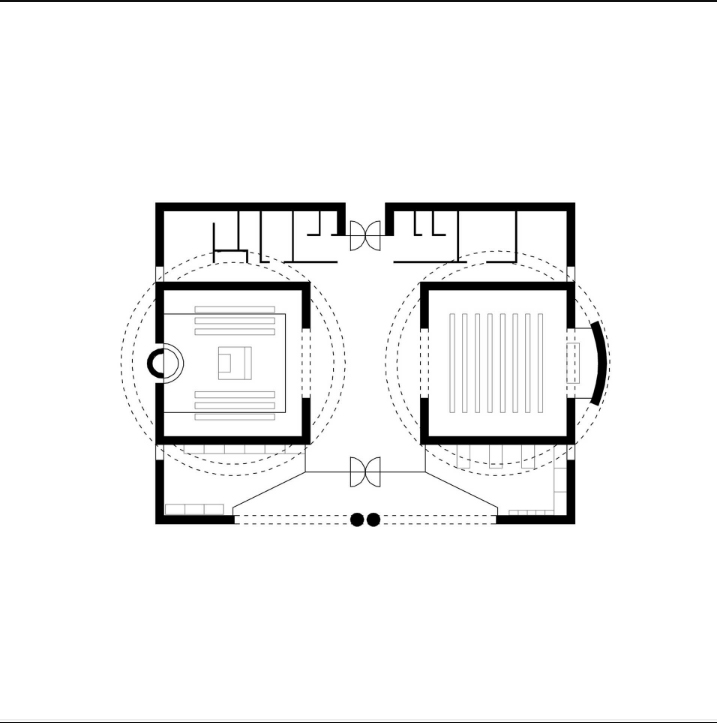 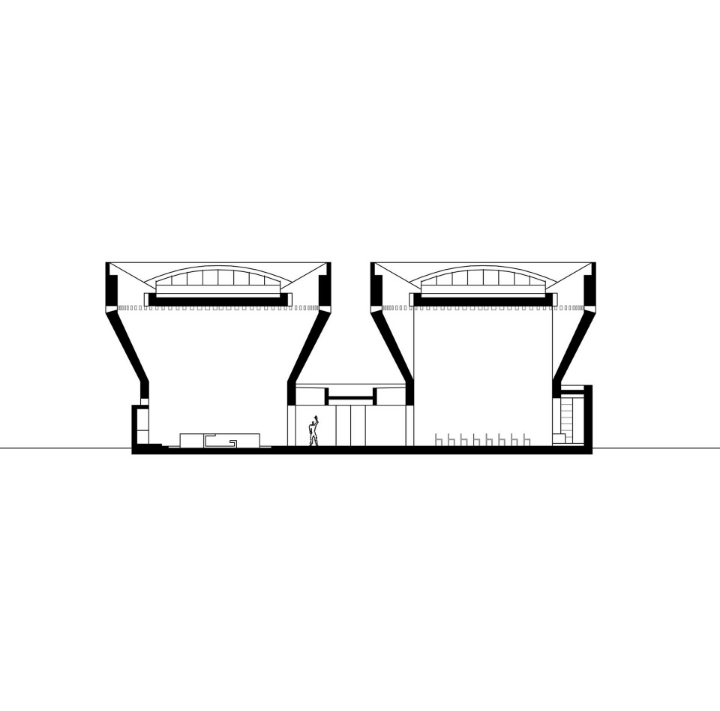 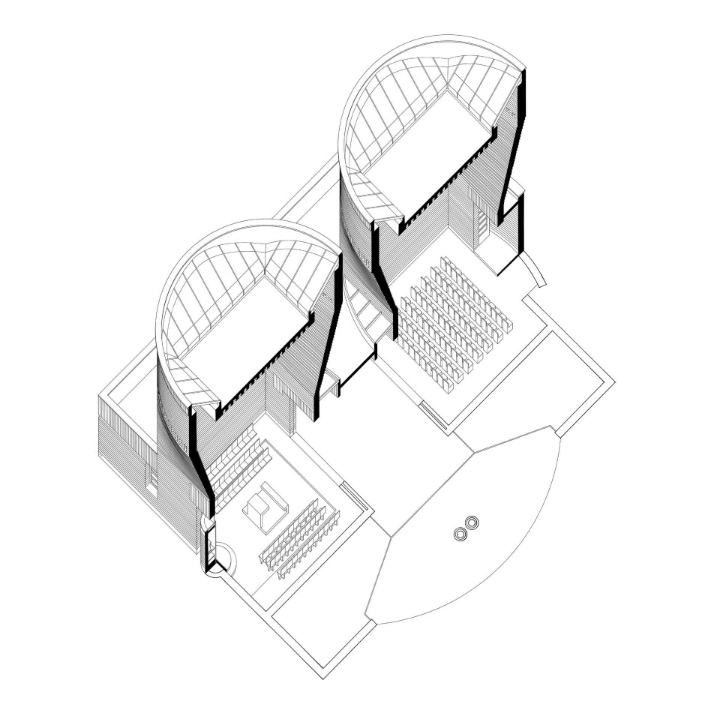 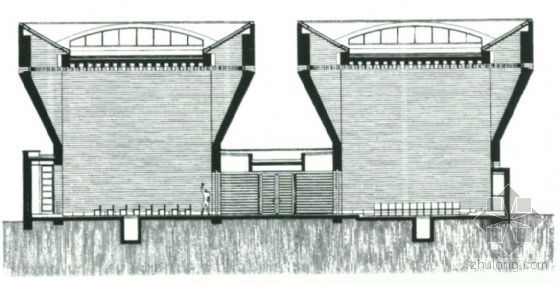 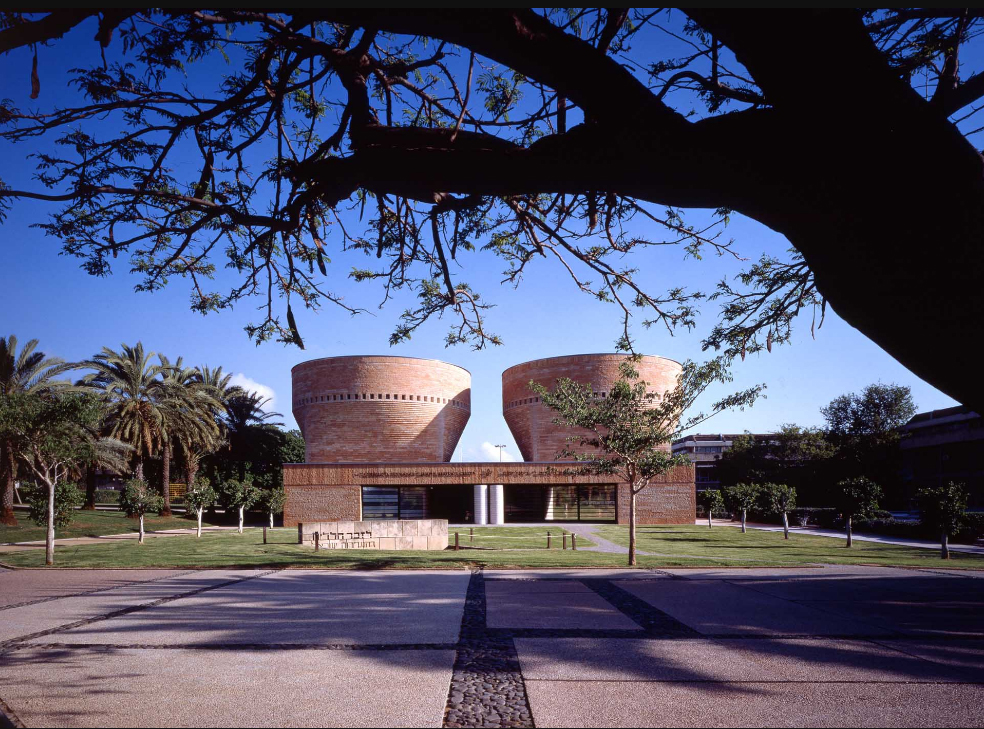 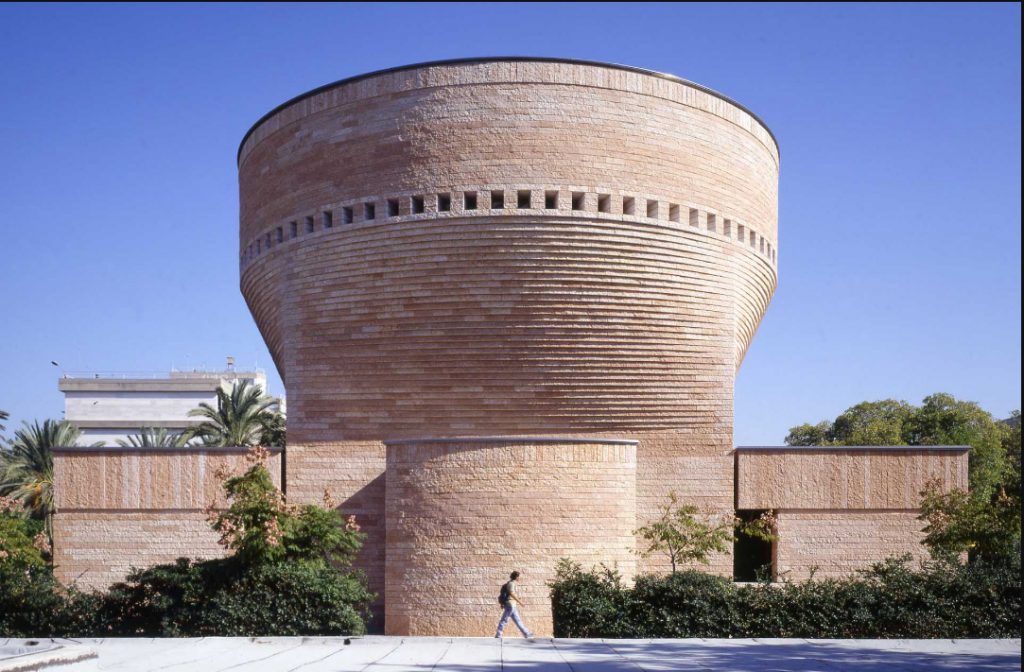 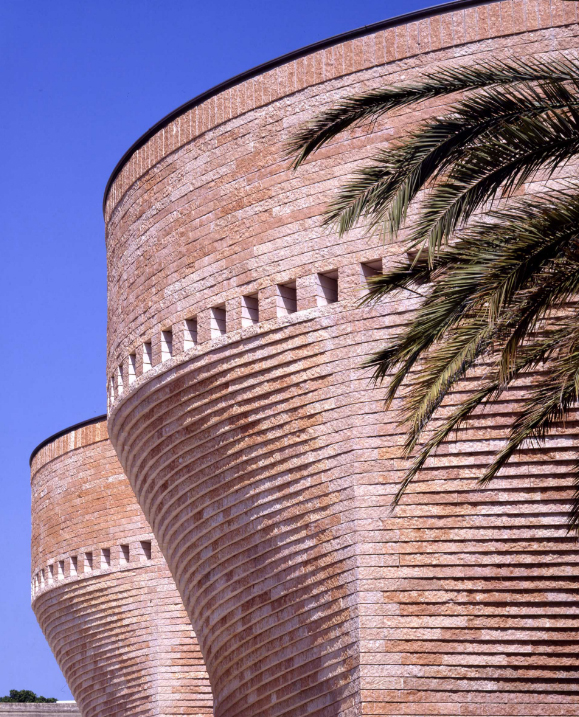 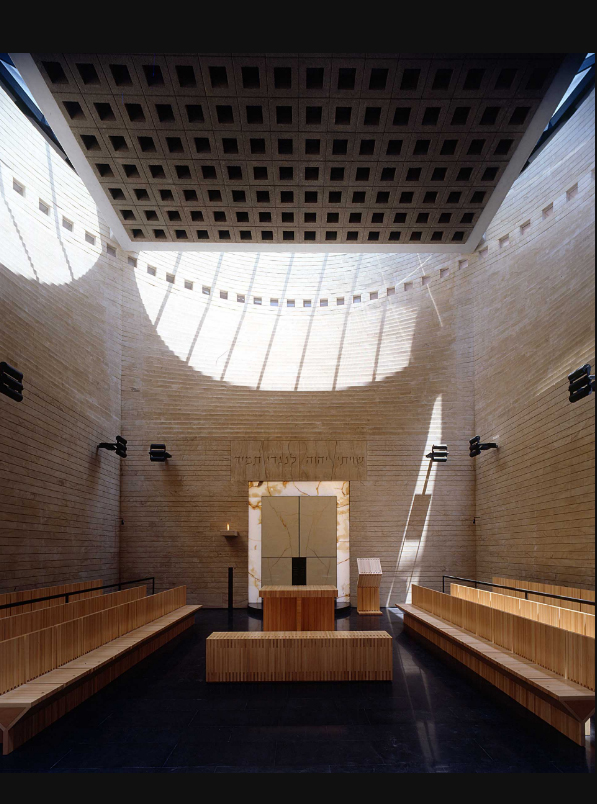 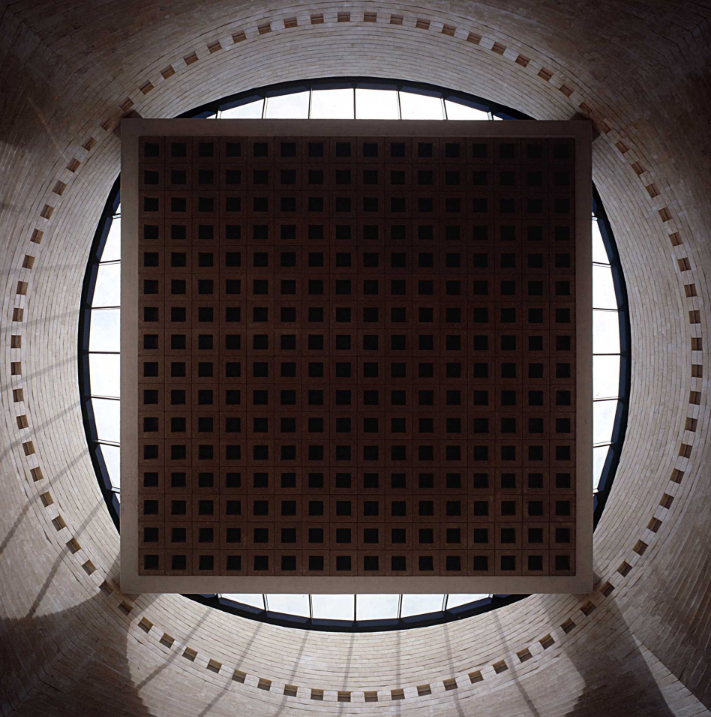 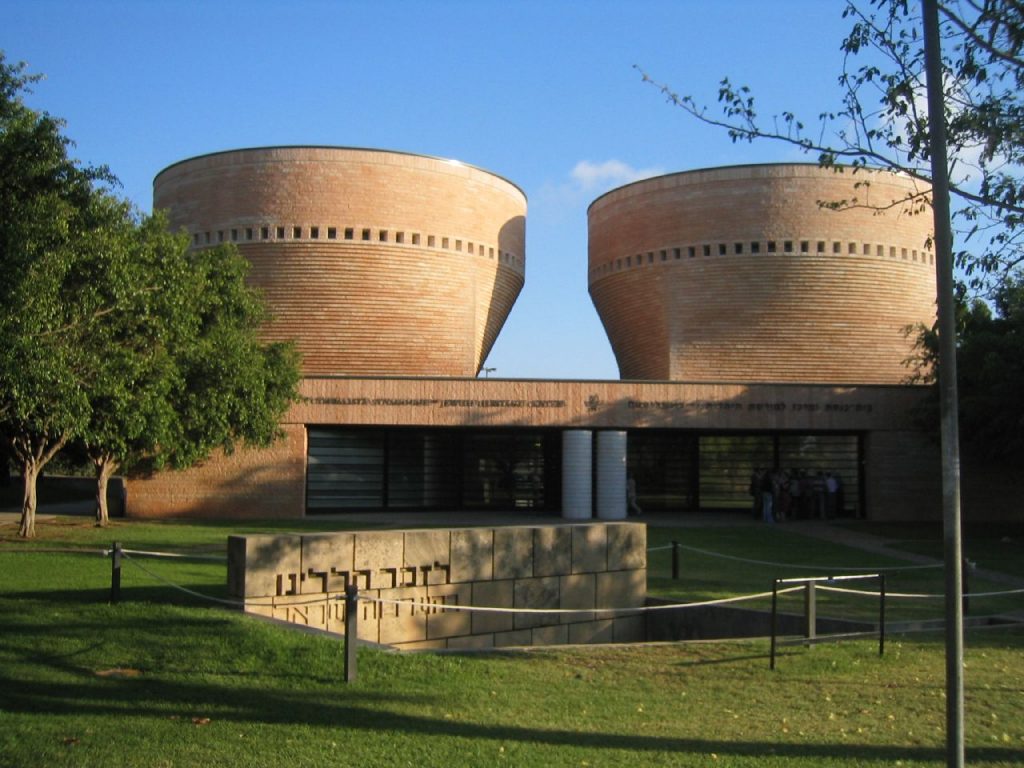 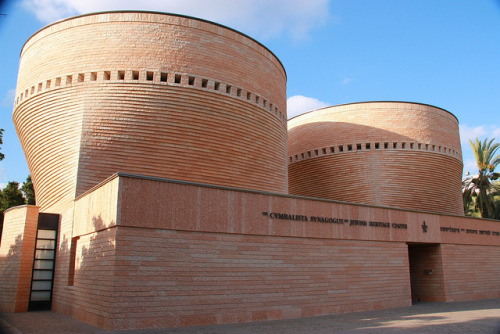 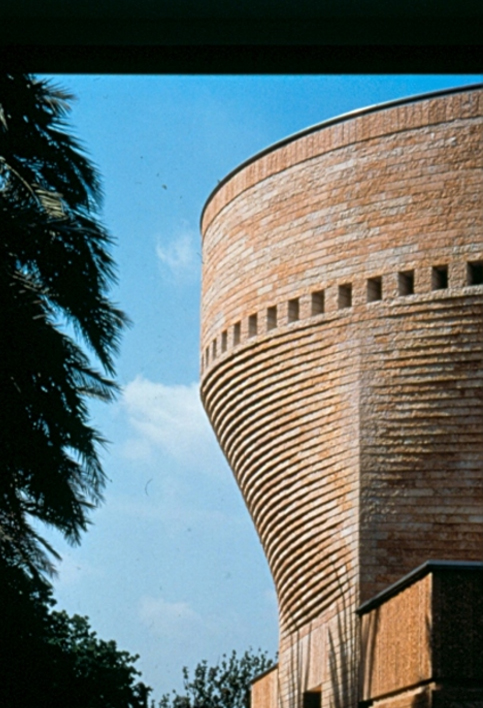 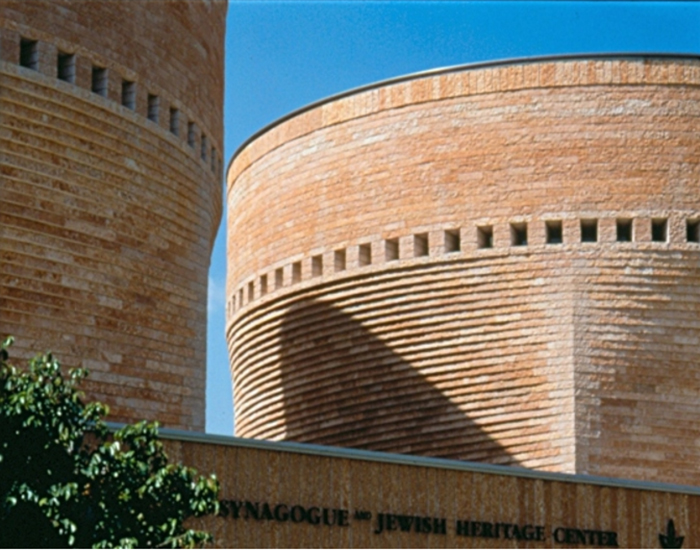 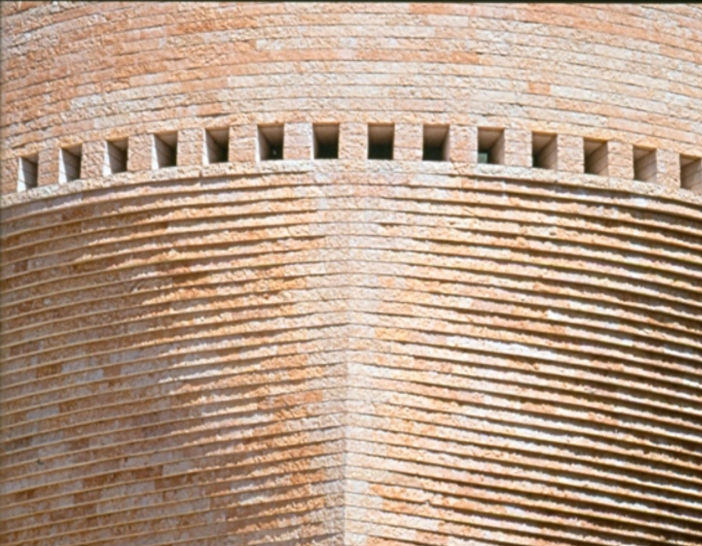 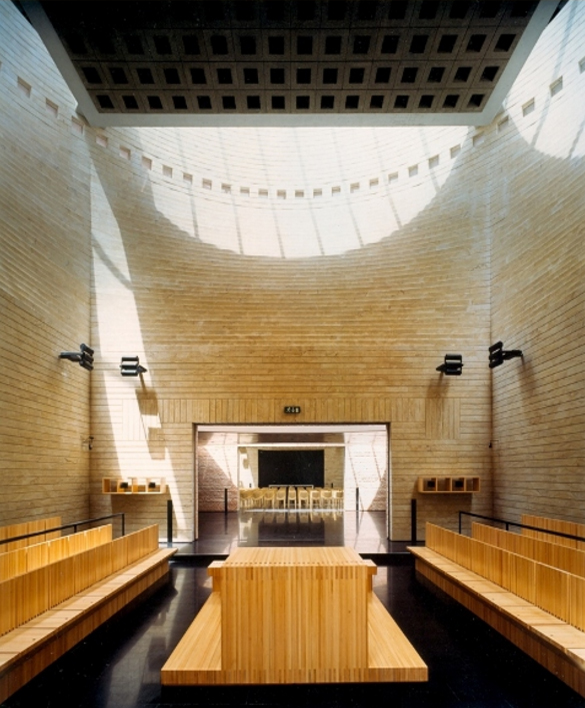 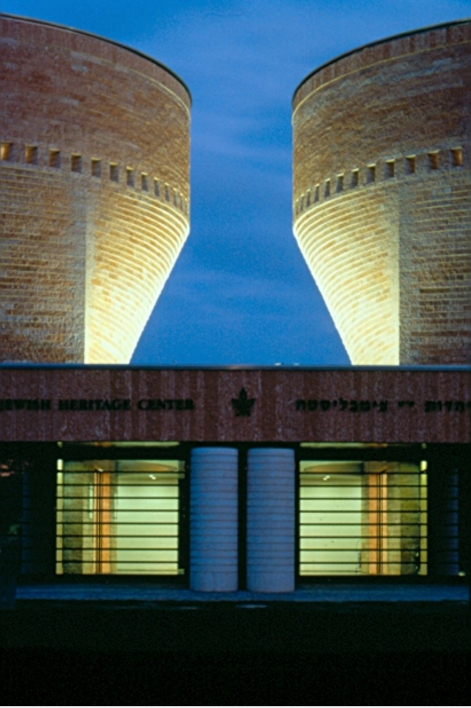