In Copenhagen the number of people moving bike is over 50% and a recent study suggests that while people living on the outskirts of the city are included, 41% reach their place of work or study due to pedal Power.

The area around the mall Fisketorvet is characterized by a particular problem, there are two different user groups whose interests may conflict, cyclists and pedestrians. Cyclists need easy access from the Brygge Kalvebod Island Brygge, use this connection daily and want an easy and safe passage in the area. This requirement for cyclists creates a conflict with the numerous pedestrians seeking access to the mall or a walk in the area of public baths. Pedestrians are not always aware of the presence of cyclists and is in summer when major conflicts arise due a greater flow of both The problem is rooted not only in the movement of the two groups, also in ground conditions requiring 90° turns, blind corners and stairs, plus the lack of physical separation between bike lanes and sidewalks.

The Municipality of Copenhagen, Denmark, is involved in a plan to transform the former industrial area and communications hub port. Within this project some old rehabilitated Public Baths like the renovation carried out by PLOT in 2012.

This time, within the same master plan, has contacted DISSING + Weitlings architecture, to find a solution to the issues of insecurity caused by the influx of cyclists and pedestrians in the dock area. The architecture has been proposed and designed a long ramp-bridge comes in and continues Havneholmen sinuously along Fisketorvet towards the main entrance of the mall, between the bridges Dybbølsbro Bryggebro Bridge and Bridge.
It is not the only bridge in the city designed for cyclists, but its strategic location allows pedestrians to walk calmly and in a friendly way in the crowded pier.

The long ramp, 220m, is an interesting object in the place that separates cyclists from pedestrians completely. Cyclists pass quickly and efficiently through the area and experience a unique and exciting view. Pedestrians, thanks to flyover can wear all spring as they have quietly avoided dangerous situations.

This small bridge ends its elegant form in Fisketorvet mall, extending along the harbor basin, and in the middle of the blocks in Kalvebod Brygge, creating an elegant contrast with other large buildings and concrete office in the area. In order to give the rider both an aesthetic and a dynamic experience, the “Bycicle Snake” is designed so that some parts are projected onto the water. The new bridge winds above the surface of the water, including hotels and offices above Vesterbrogade pedestrian traffic, especially at the level of the first floor.

The construction of the flyover, which by its sinuous shape has been called Cykelslangen (Snake) is a simple structure from the engineering point of view. With a length of 220m and a width of 4.6m, with 10 spans structure without too much weight, distance between columns of approximately 17m, while the ends are 4m and 15m in Fisketorvet Havneholmen. The superstructure is supported by steel columns, hollow, circular 450 mm diameter, whose foundations have been prefabricated in some cases and in others on concrete piles poured “in situ”.

The fully integrated bridge nature makes the supports of the superstructure, in places where it is attached to the structure, resulting a monolithic piece, allowing the bridge does not need bearings, however, the expansion joints are required in brackets end where the bridge has the greatest movement.
Cover 4.6m wide is formed cantilevered steel extending from a central hexagonal box also made of steel, this detail is of the bridge of a distinctive appearance when viewed from below and can see the overhangs of the cover which is unorthodox rest on transverse ribs in the form of V.
The thin “snake” steel bike seven meters above the water level rises and has 30m of ramp. The difference in height between the main entrance and Havneholmen Fisketorvet is 5.5m.

The bridge is made of steel, which helps to give a light and elegant look. The surface has a bright orange color, which creates a clear visual field for cyclists. The bridge deck and columns were welded together on site to ensure that correctly erected and coincided with bases.
To create the necessary columns supporting the bridge area, it was necessary to remodel and out some existing pools and bathrooms on site.
During the night the serpentine road becomes a bright visual element, thanks to its recessed lighting, which enriches the whole area.
as flooring, paints, coatings, etc.” 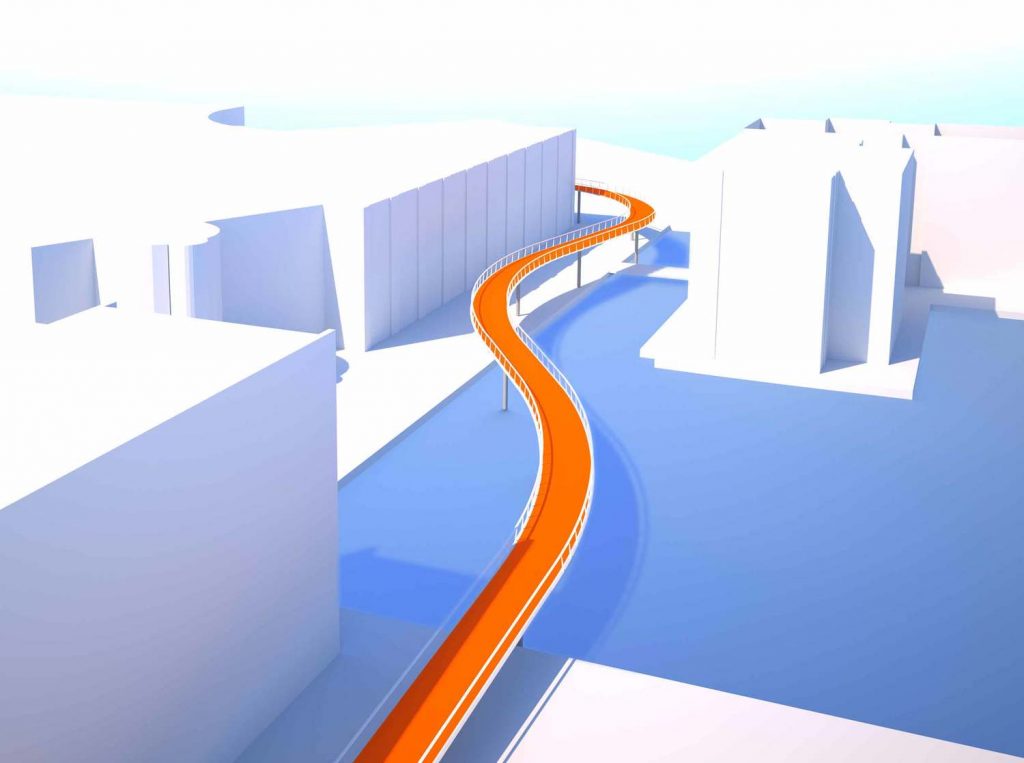 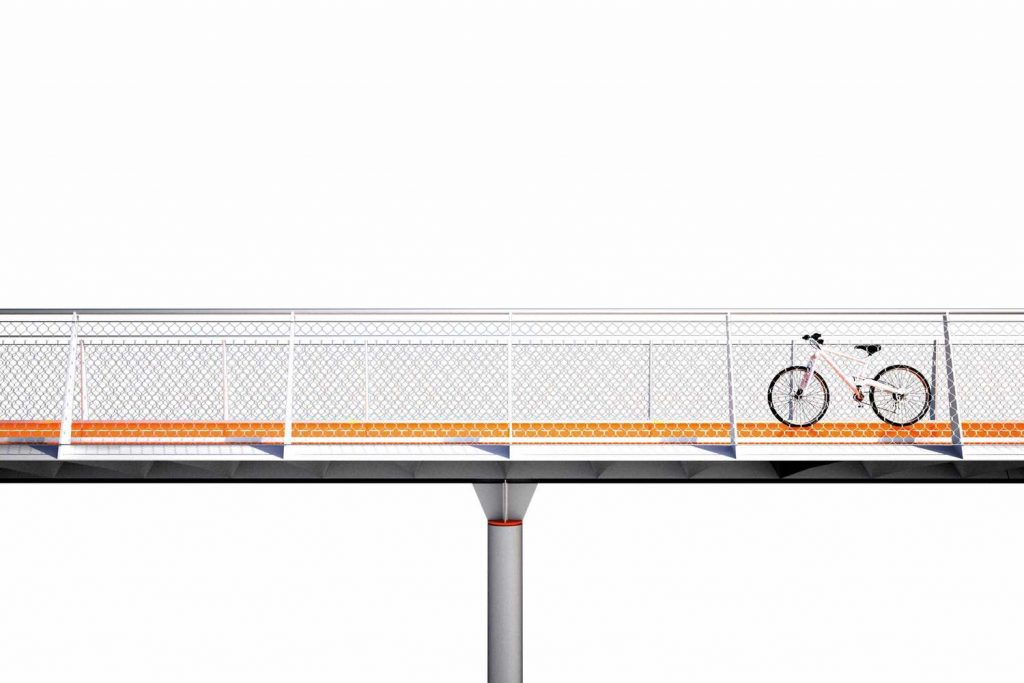 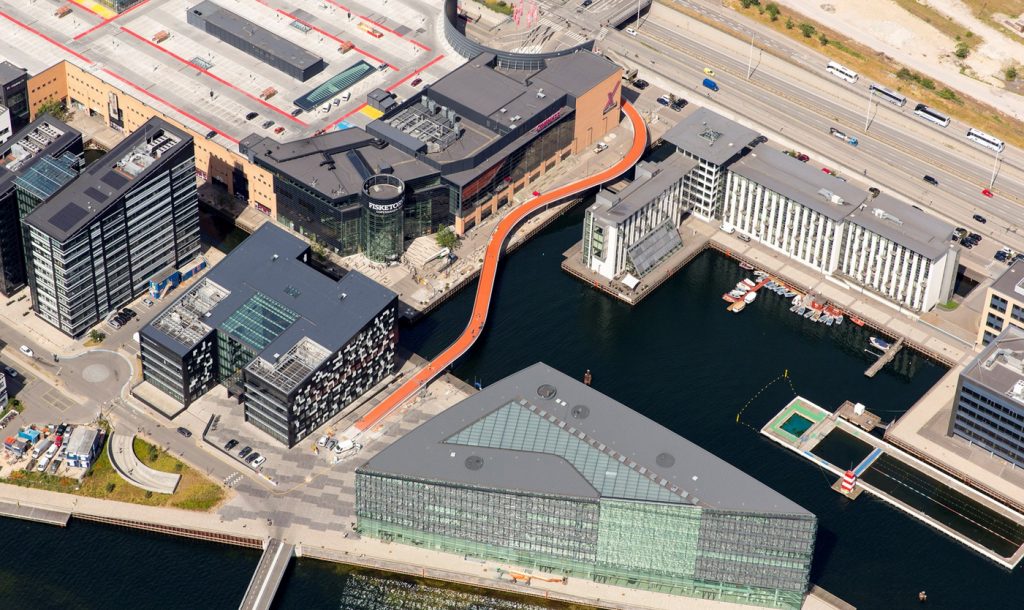 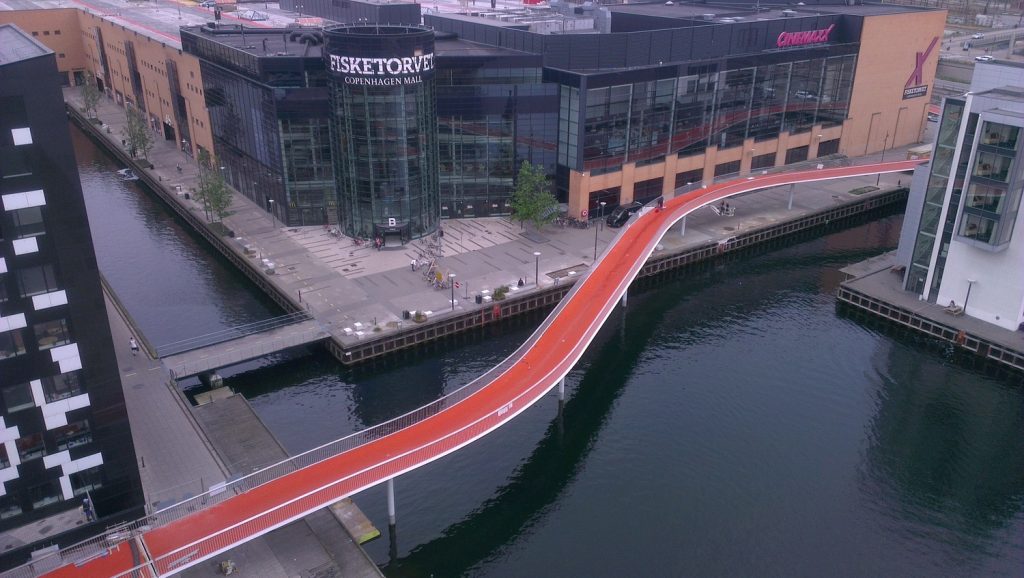 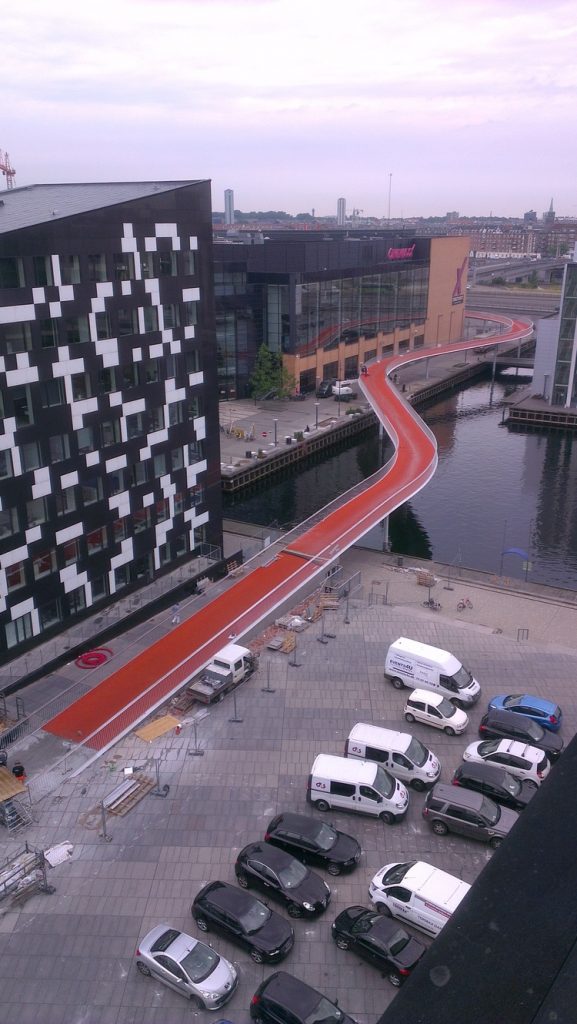 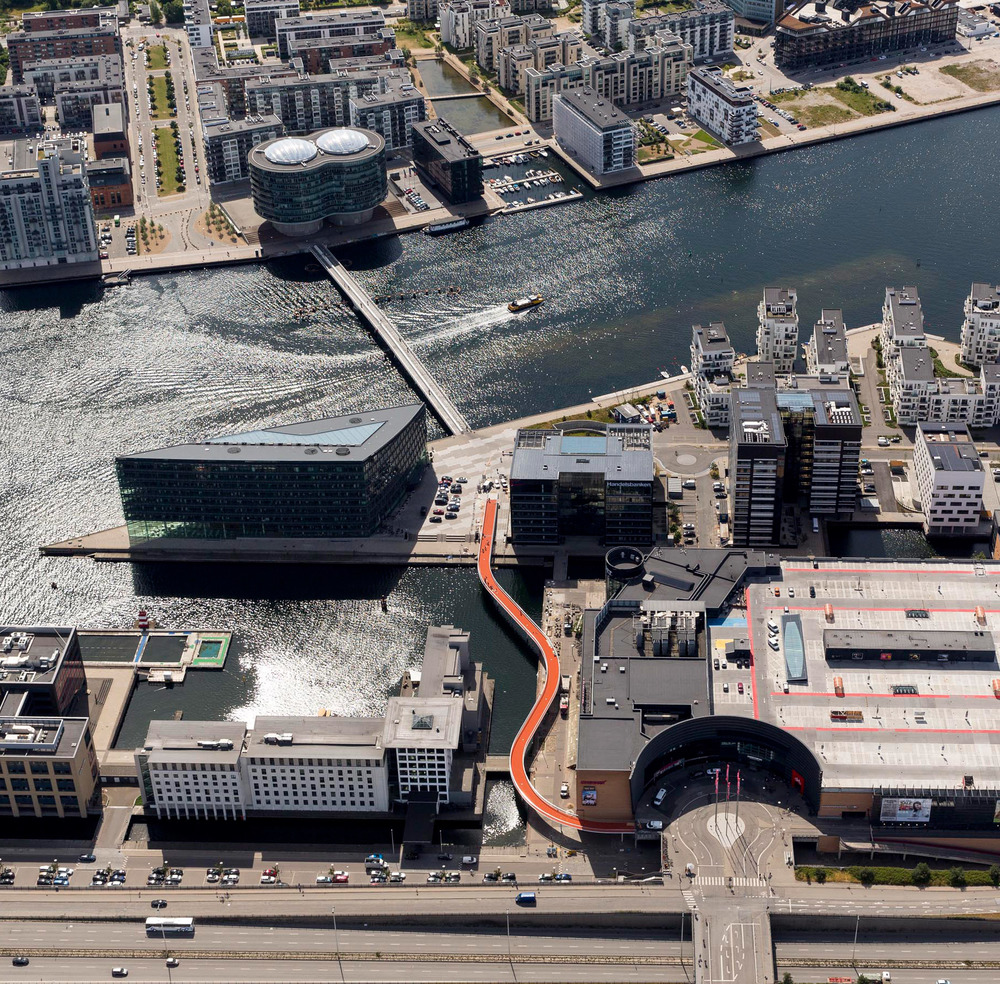 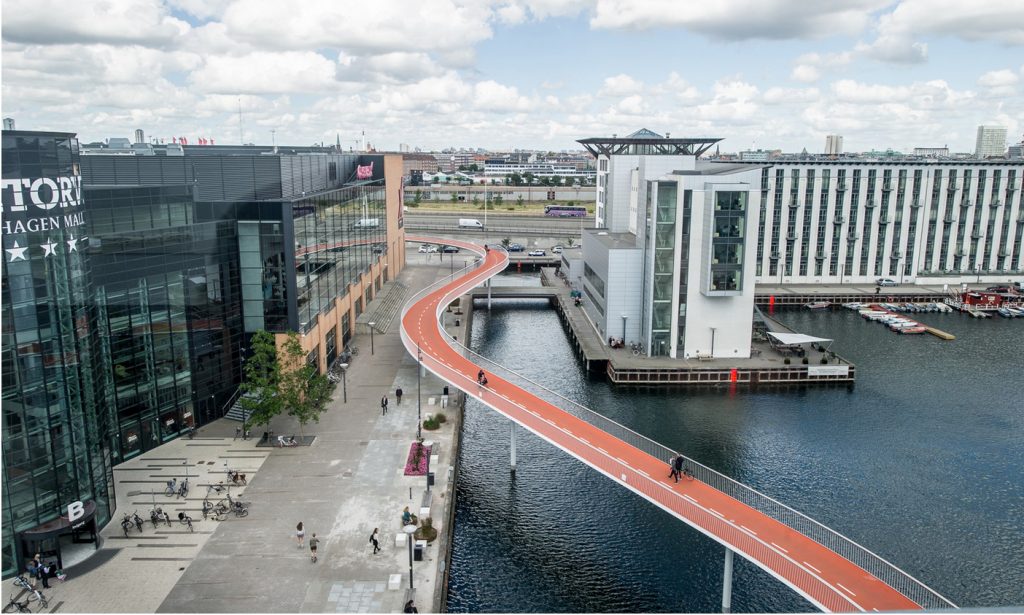 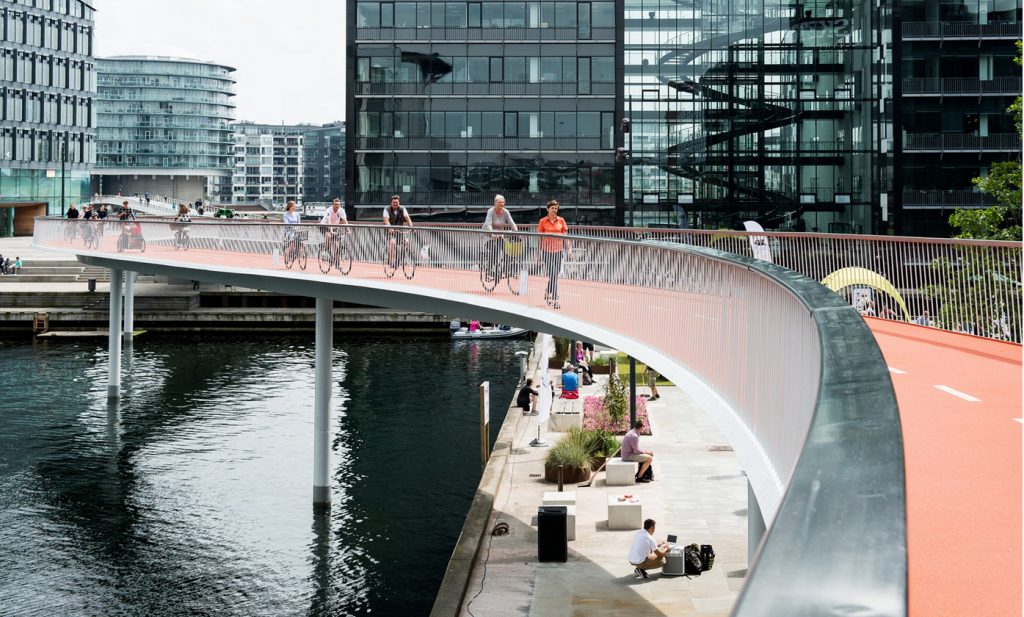 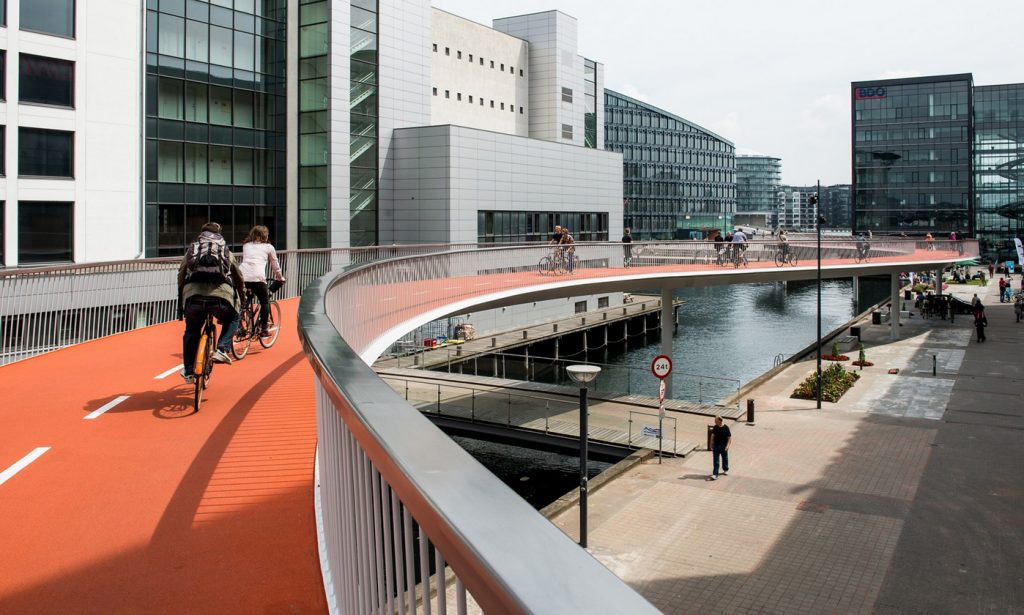 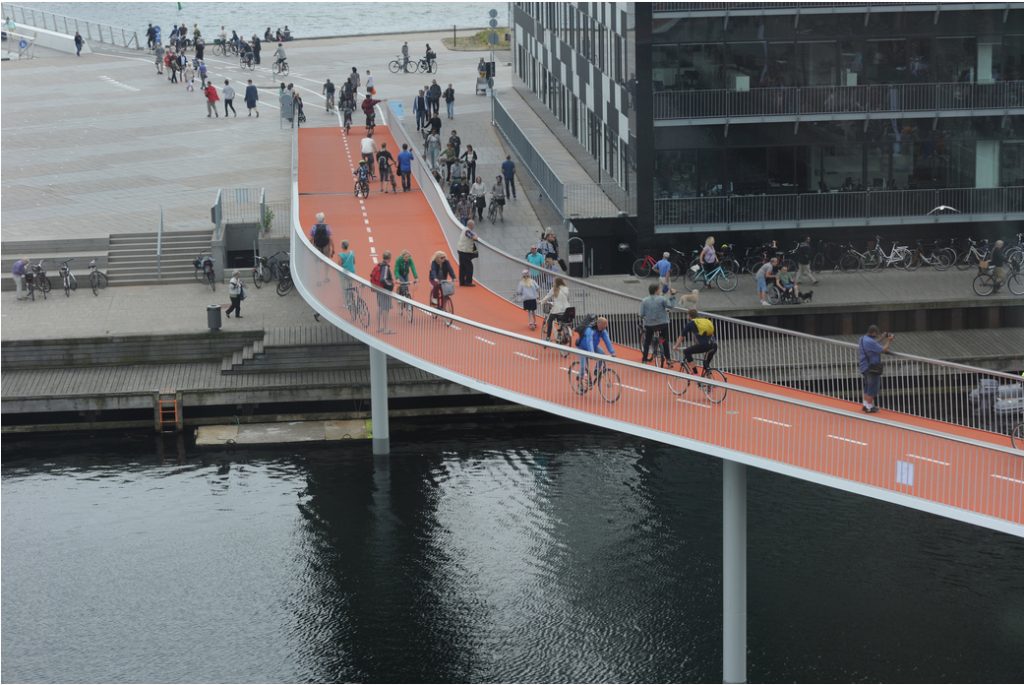 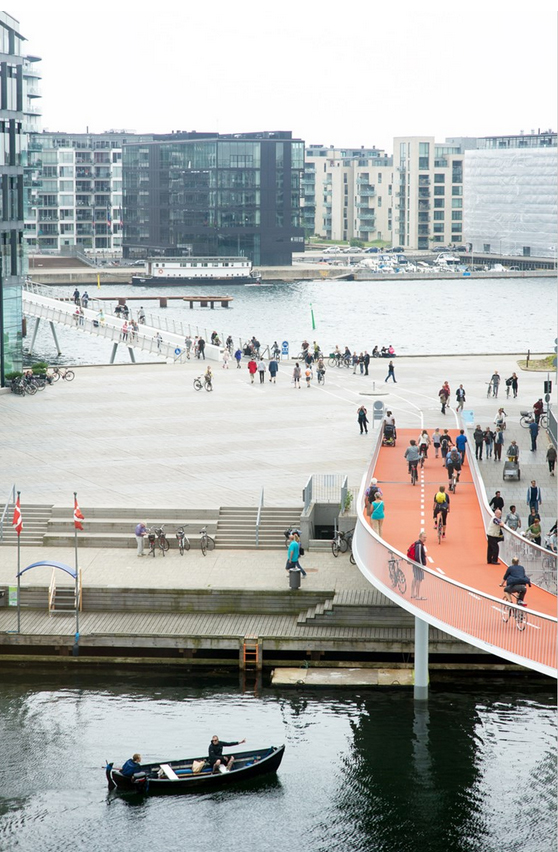 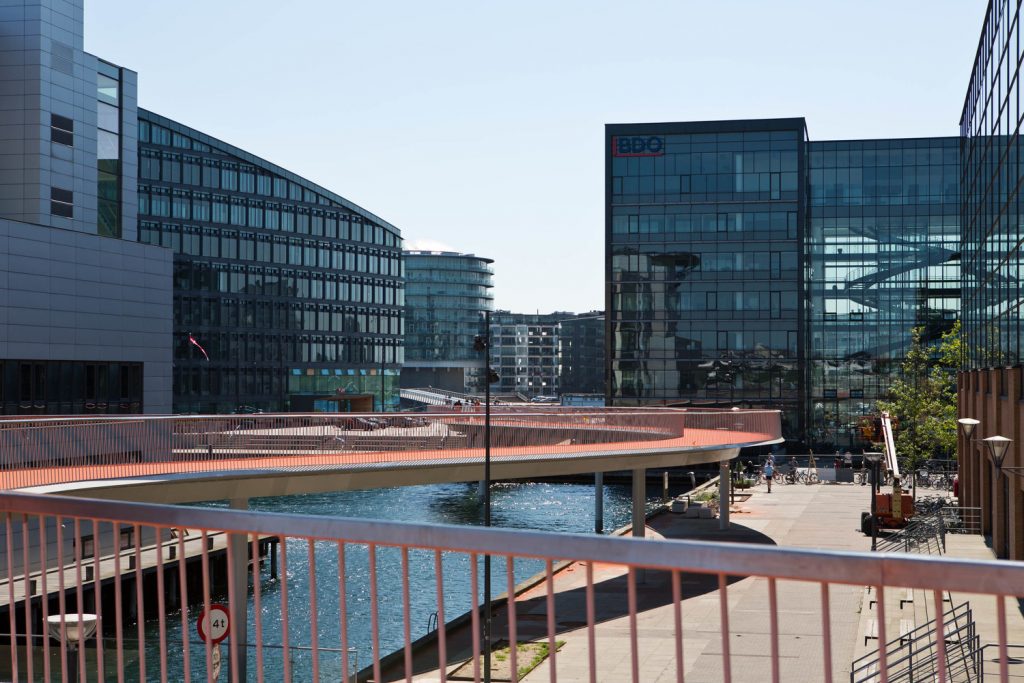 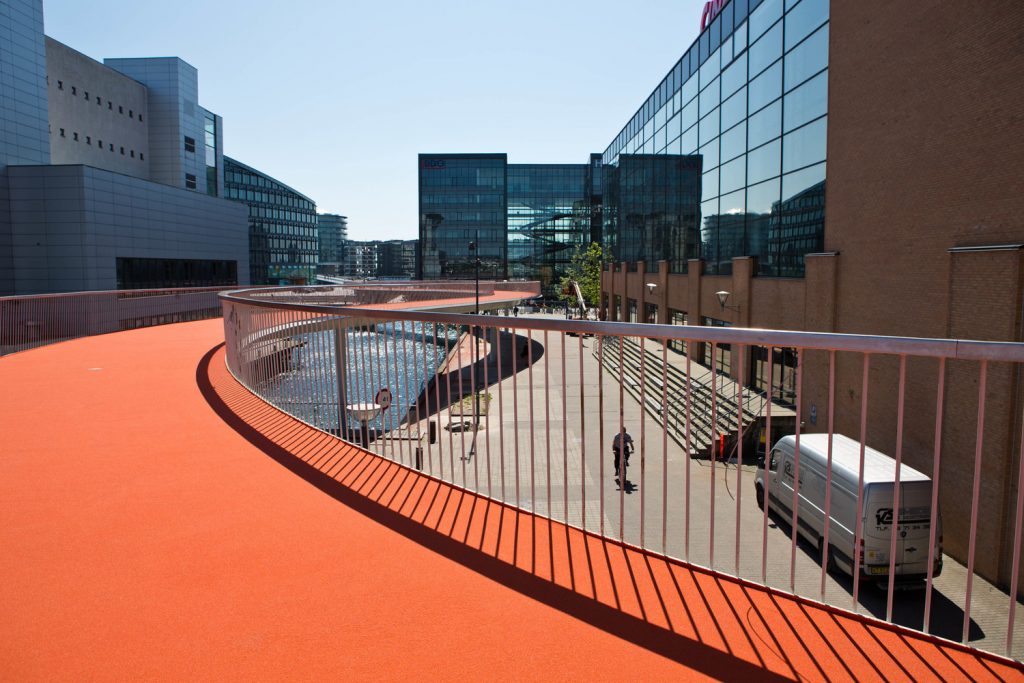 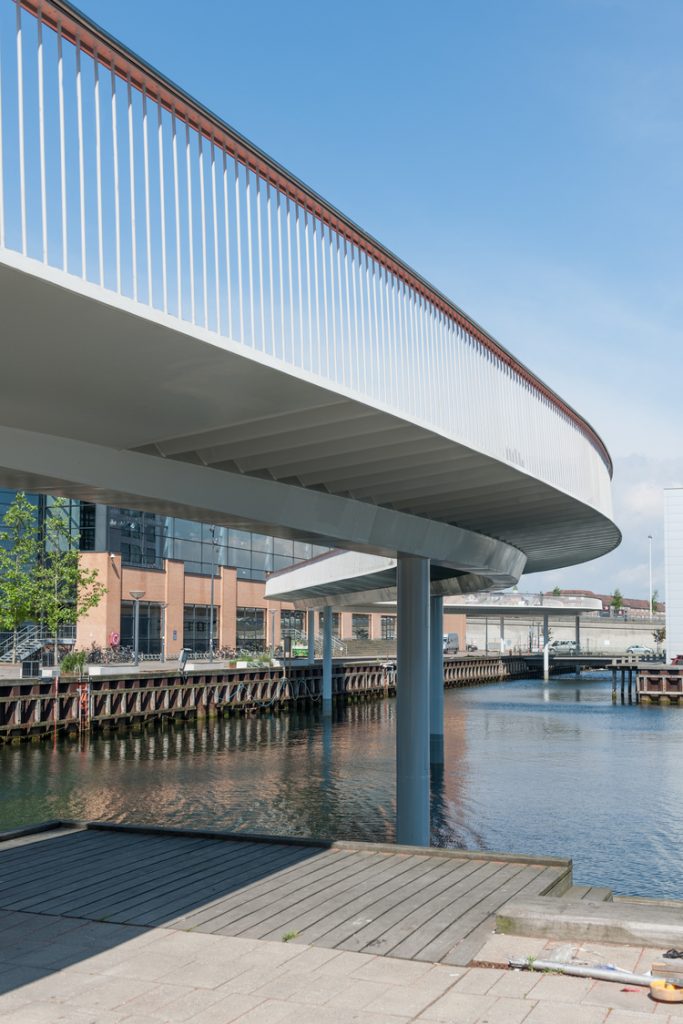 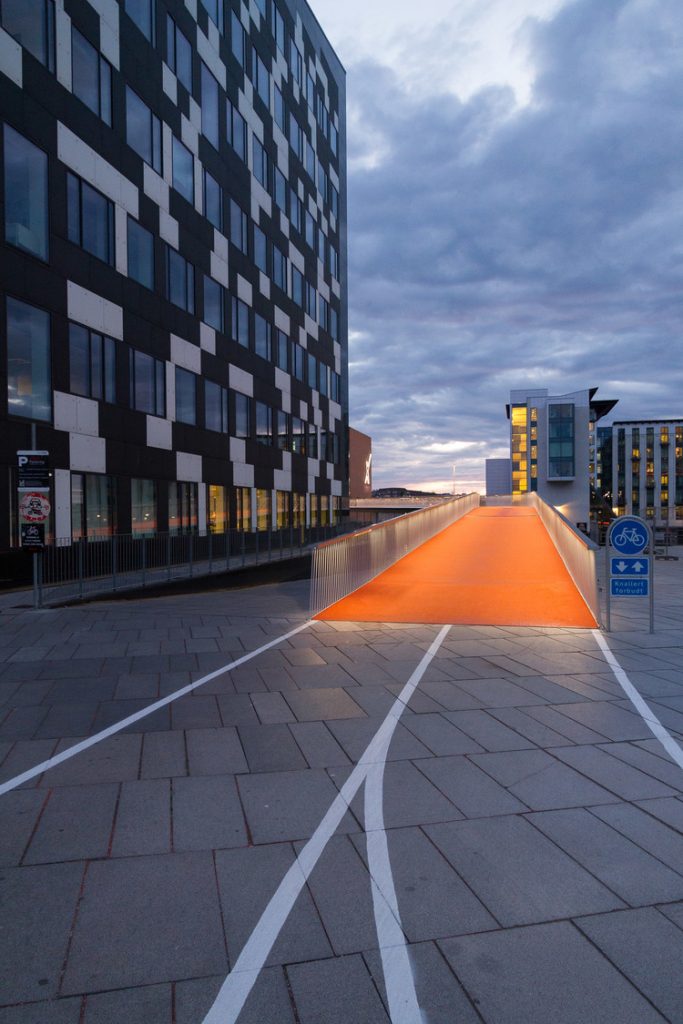 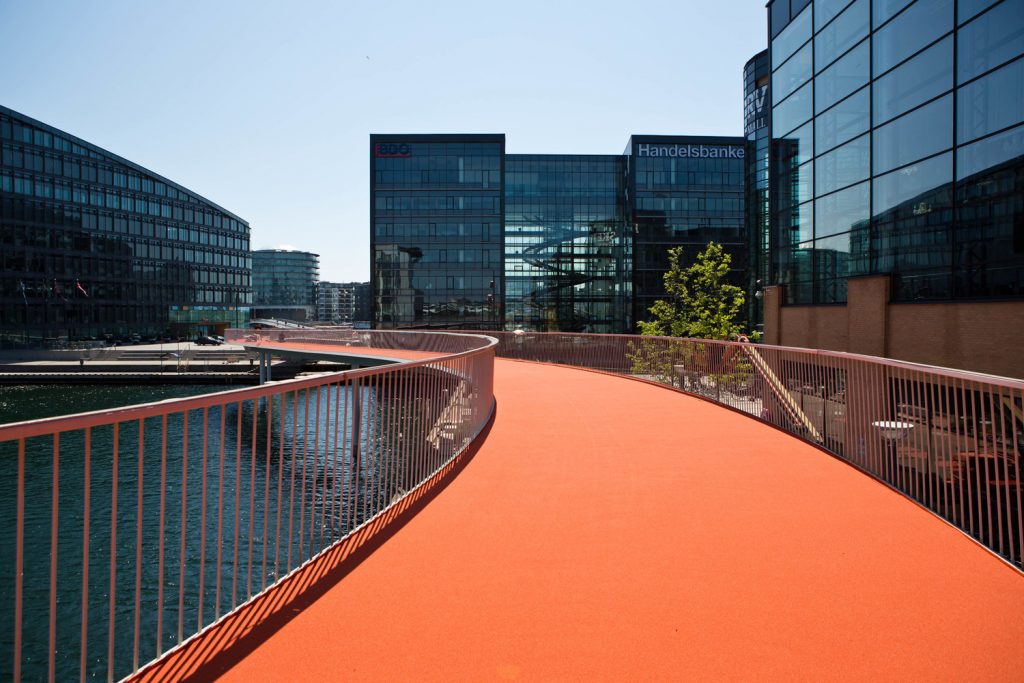 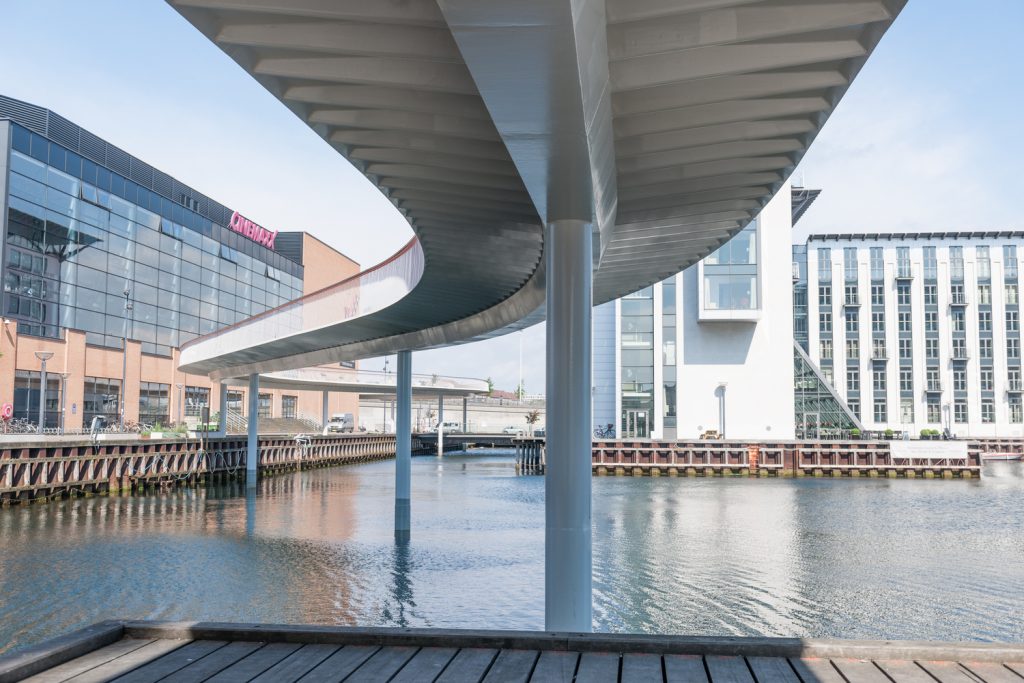 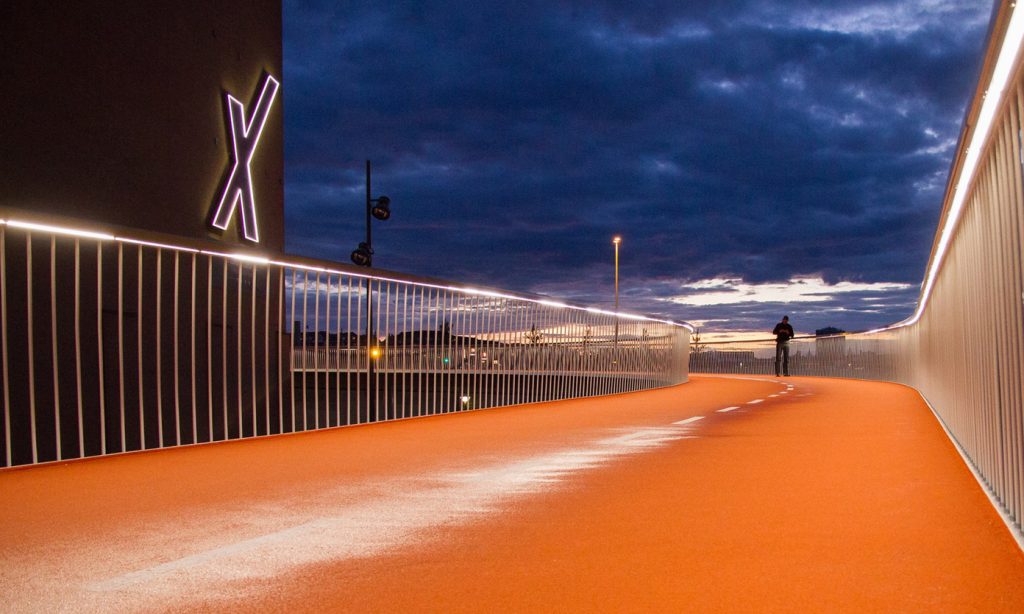 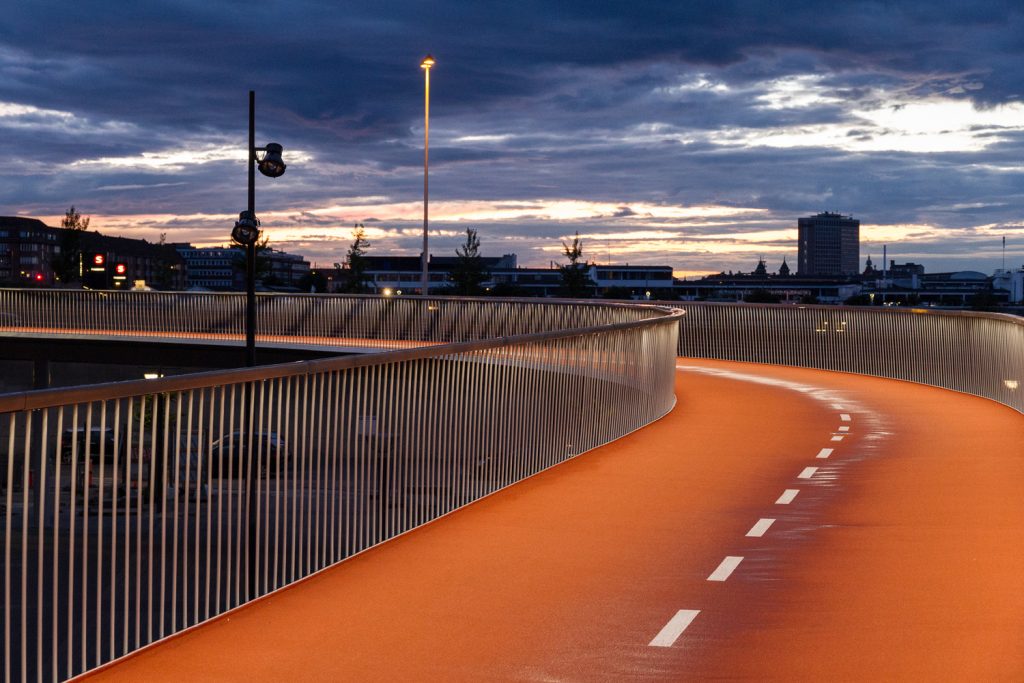 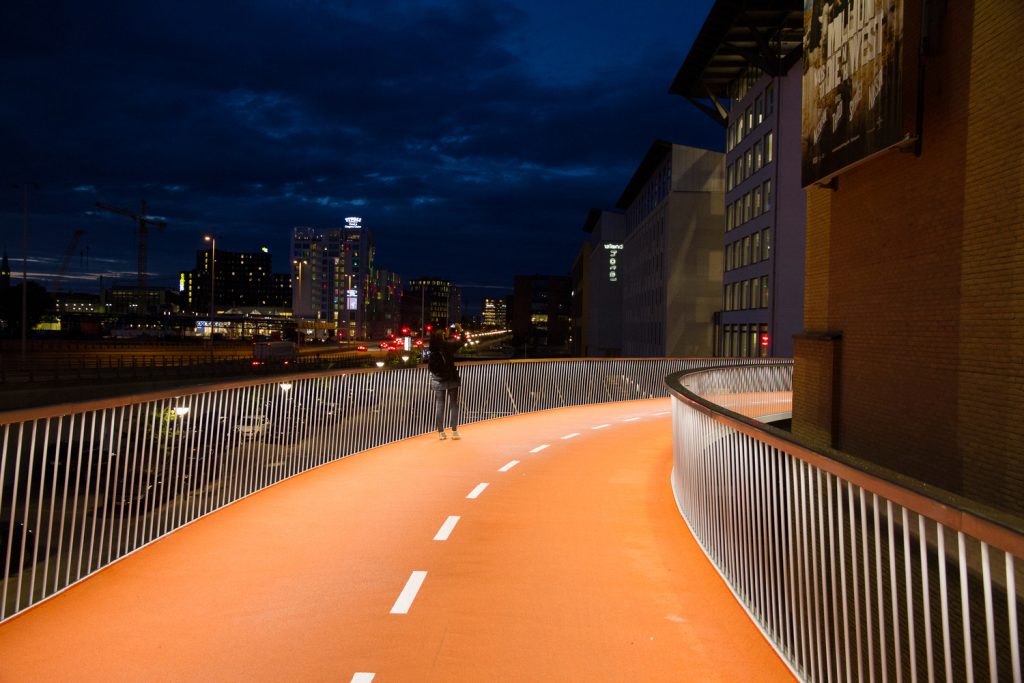 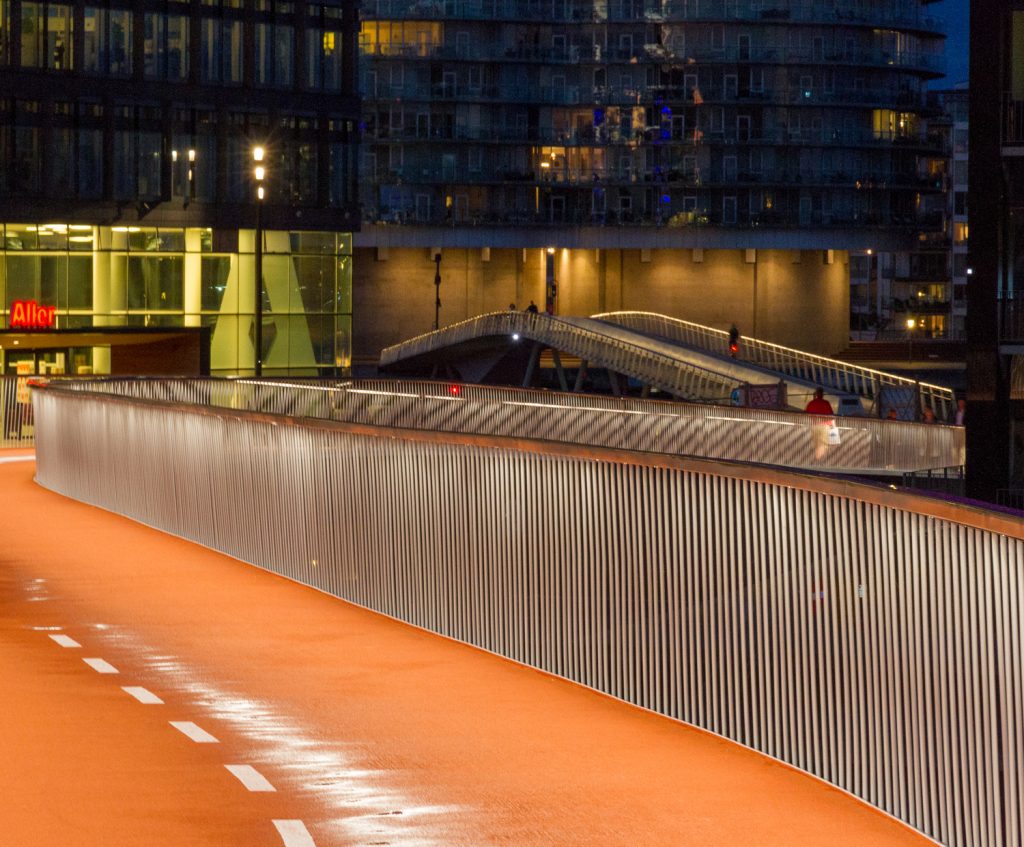 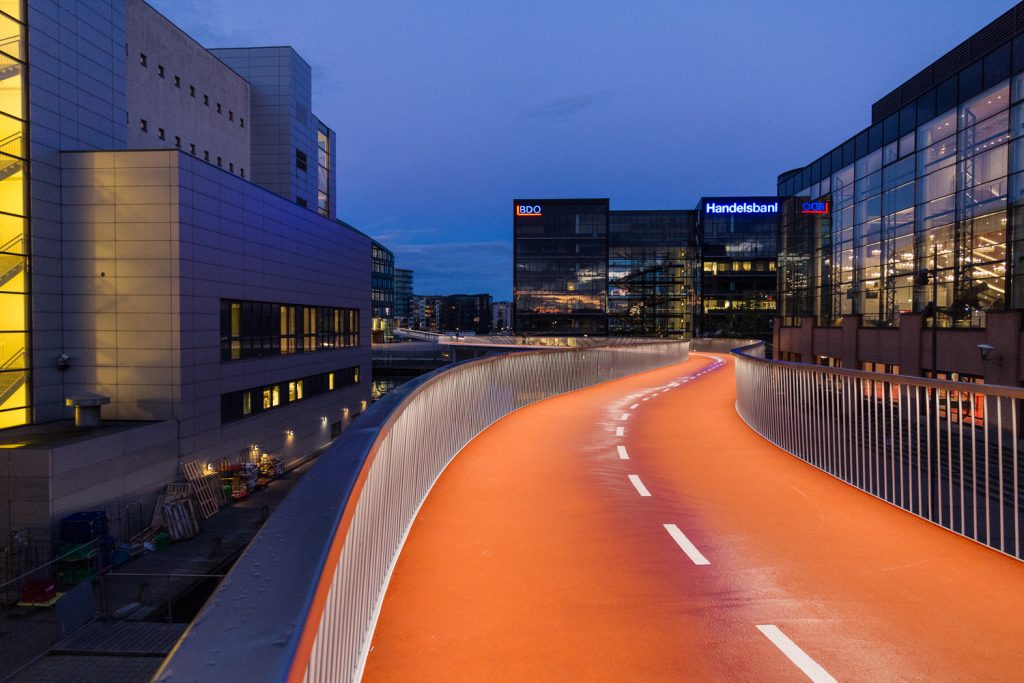 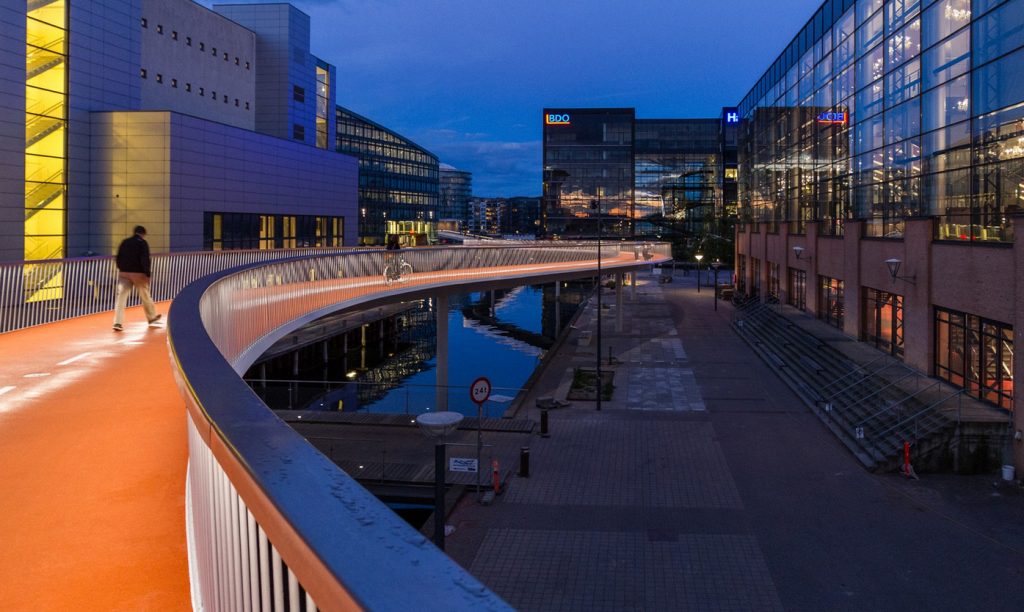 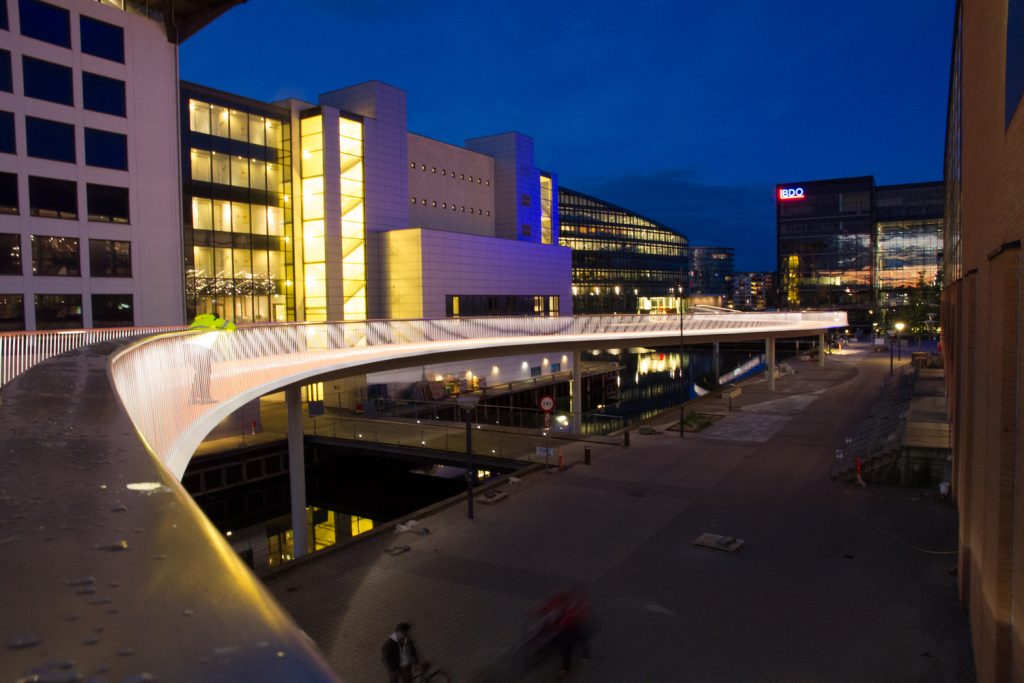