The Cultural Center of European Space Technologies (KSEVT) was designed jointly by four firms Slovenian architects Bevk Perović Arhitekti, Dekleva Gregorič Arhitekti, OFIS Arhitekti and Sadar + Vuga Arhitekti. The collaboration of four architectural practices in the realization of this project, together with its location and a special functional program, make it unique. The idea of ​​collaboration was raised at the first meeting at which investors invited four companies to collaborate in a domestic competition, the architects decided to take the project forward together instead of competing.

The KSEVT is the only institute in the world that systematically allows continuous dialogue between artists and scientists, creating awareness of the culture related to the space, while offering a glimpse of the complexities of cultural understanding by the technological development existing in space exploration. The project, officially opened on September 6, 2012, has received numerous awards and international recognition, including: Golden Pencil 2013, Iconic Awards 2013, Plečnik’s Award 2013, Trend award 2012 and was nominated in the Awards of the European Union Architecture contemporary, Mies van der Rohe 2013

The KSEVT was built in the small town of Vitanje, Na vasi 18, Slovenia. This rural town is home to the family of Herman Potocnik Noordung, first theoretical European space engineer. The construction of this particular building contrasts with the scale of the houses in Vitanje. Perhaps the only structure that can maintain a relationship with the architectural project is the village church, built on a hill in the middle of the urban fabric.

The Cultural Center of Space Technology Europe (KSEVT) was erected on the site formerly occupied by the old House of Local Culture, is in a transverse spatial axis of the settlement, an ideal balance and improve programs across the public and social location the place, but at the same time far enough away to allow the small town retains its urban identity. 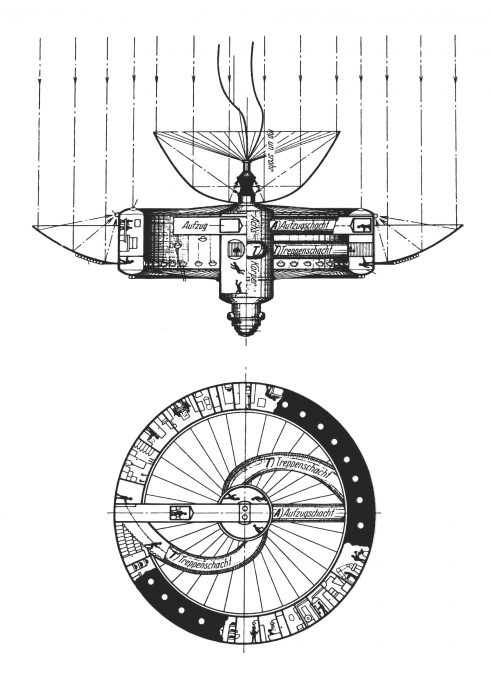 Wheel housing designed by Noordung in 1929

The building’s design is inspired by the first geostationary space station, or to be more precise, in the wheel housing space station designed by engineer Herman Potočnik space Noordung in 1929.

With its program, the KSEVT substantially complement and emphasize local cultural and social activities in the old Community Center City Vitanje, strongly connected with additional cultural activities such as exhibitions or events, combined with scientific, research and conferences culturalisation about space.

The space station that Noordung described in his book, 1929, was designed as a three parts geostationary satellite: a solar power station, an observatory and a living wheel. After several decades of reflections on habitation in space, this idea is still the most revolutionary, still (2014) not performed. The living spinning wheel that creates artificial gravity with the centrifugal force of the circular building is the best and at the same time simplest solution to make human life possible in weightlessness. Since we are not used to that kind of condition, exerts long-term negative impact on our body. A station in this orbit could also represent an ideal starting point for long space flights, given that the attractive force of the earth is still the biggest obstacle.

The whole provides a spatial effect of artificial gravity floatation and rotation.
The top of the building has an area of ​​research, while the bottoms will house exhibition spaces, a multipurpose room and a special library, “The Treasure of Modernity. 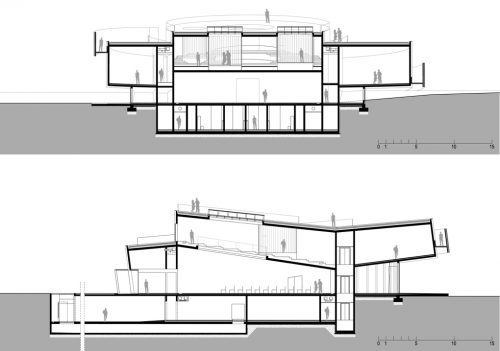 The building has two entrances, one on the main square that opens on the east side and one on the north side.
Between the building and the main road there is a public open space, the square, designed to host social events outdoors. Its equivalent on the opposite side is the orientation of the building, with its circular floor towards Jesenica stream, offering an alternative type of public open space to the green environment. A third orientation opens onto the sports field, also outdoors.

The main entrance covers the protruding part of the lower cylinder, passed through a narrow space that leads to a circular foyer and into the living room. The lobby can be separated from the activities in the room with a curtain. 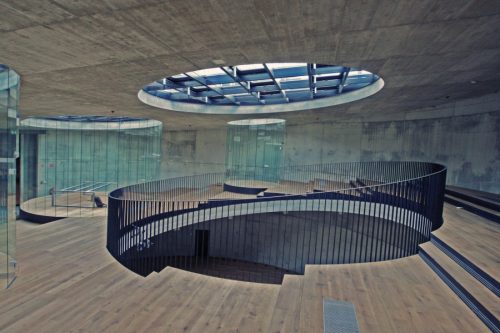 The circular room seats 300 people and is surrounded by a semicircular ramp that connects the exhibition area on the overhanging part of the larger cylinder. In the west and along the ramp offices are located.

The ramp also represents a transition from the bright space of the hall to the dark exhibition area. The vertical connection with a staircase and a large elevator connects the exhibition area directly to the lobby of the hall. The exhibition space continues through the landing between the elevator and the staircase to the smaller cylinder, the multi-purpose hall and an auditorium raised above the room. From here, you can see the activity being performed on the lower floor.

The smaller cylinder ends in placing its highest point a club dedicated to space technology researchers, where can concentrate on their work, regardless of the other activities in the center. 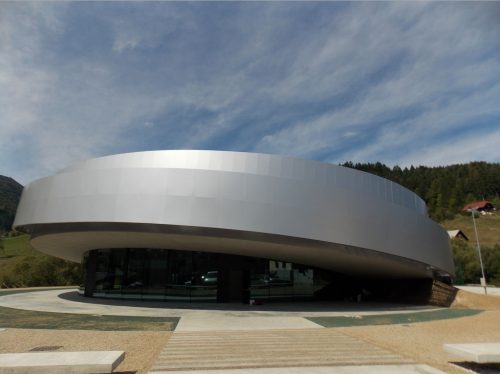 The building features a series of interlocking rings that found on the top, one on the other, to create a continuous ramp structure. It develops as a monolithic concrete structure positioned freely between a main road on one side and on the other a stream on a green landscape. The exterior and interior of the building are formed by two lower cylinders. The bottom is larger and rises from the North to the South, while the upper cylinder is smaller and joins the largest in the south and returning to reappear by the north. The bottom cylinder is supported by the glazing area that can fully open access to connect classroom activities to the plaza. On the cover, four openings of different sizes allow natural light to the lower level, through the large center hole.

From the outside, there is a dynamic effect between the cylinders, accented by glass rings surrounding the building, creating one of the sides the feeling that it was floating, while touring south and west sides to the road and on the other hand, the strong field certify strengthening its connection with the surrounding environment.

In contrast to the surrounding building, outside the Culture Centre of European Space Technologies has coated the outside with smooth aluminum sheets resting on glass facades. Inside the reforced concrete, with traces of formwork, formed their combination with metal and glass walls. In the terrace area has been placed on the floor deck with aluminum trim on both edges and the railings. The outdoor area of the center is a continuation of the green environment, largely covered with grass. Just around the building, in the front area and in connection with the sports field on the east side, the grass is replaced by pebbles.