During the negotiations of independence from the French, the territory of New Caledonia requested that the government of the metropolis, chaired by François Mitterrand, build a center in Noumea for the promotion of Kanak culture and dedicated to the memory of the political leader Jean Marie Tjibaou, assassinated in 1989.

In this work, the architect Renzo Piano joined Pacific and modern cultures.

The year work ended, 1998, the architect was at the White House receiving the prestigious Pritzker Prize, considered the Nobel of architecture from U.S. President Bill Clinton.

Noumea, capital of New Caledonia. The cabins are built inside a nature reserve along the coast, surrounded by lakes and mangroves at a site of great beauty.

The Cultural Center Jean-Marie Tjibaou was discovered as the most innovative and exciting project in the city, about 10 km from downtown.

It sought to make a tribute to a culture based on respect for its history and traditions, past, present and future, as well as its sensitivity. The project was based on the indigenous population of that part of the Pacific, its culture and its symbols, which are very old but are still very alive.

Since the beginning of the design process, Piano studied the use of air currents and launched the search for a way to express the traditions of the Pacific with a modern language. That means putting the technology and methods European traditions aside and serving the expectations of the Kanaks.

The concept and design of the Cultural Center Jean-Marie Tjibaou in Noumea in New Caledonia, was generated by the need to maximize ventilation in a humid climate. The project builds on the topography of land, vegetation and the breeze from the lagoon to create rising air currents, which are then removed by extraction towers, with the distinction of being the highest building on the top of the hill.

It should not be an absolute travesty of this culture or imitation, or an approach from a colonial perspective. Neither could it be a completely alien concept.

This is a town that has its own ways, vegetation and public spaces, and is located in direct contact with the ocean.

The cultural complex is composed of ten houses, all of different sizes and functions. The small houses are 63 square meters, the medium houses 95 square meters and large houses, 140 square meters.

Their heights range from 20 to 28 meters, with a circular floorplan, which are grouped into three villages, each with a distinct role. All of them are connected by pedestrian walkways in the form of spokes evoking the central promenade of traditional villages.

One part of the cultural package is aimed at permanent and temporary exhibitions and contains an auditorium and an amphitheater.

In the second group of huts are divided spaces administration, research, library and a conference room.

Finally, other studies contain cabins for traditional activities such as music, dance, painting and sculpture.

The structure and operation of the cabins Caledonia replicated and adapted architectural and socially.

They all have created a structure shaped peineta iroko. Reminiscent of the huts and crafts Kanak, the slender ribs of the lath structure and among them are seamlessly integrated in the lush landscape and the culture of its inhabitants.

Although these ancient wooden slats were also, on this occasion, the union has made structural tube horizontal and diagonal bracing rods of stainless steel.

These structural elements reminiscent of traditional mainstays such as the spine of the fish to avoid the beams warped long.

Renzo Piano describes the structures that are curved like huts, built with wooden beams and nerves are looking containers archaic archaic, whose interiors are equipped with all the possibilities offered by modern technology.

Vernacular buildings are born of intense communion with nature. They used perishable materials and their implementation on the territory is based on a very fragmented.

Following these references were used traditional materials and construction systems, and also won the respect of natural elements such as wind, light and vegetation

The cabins are built with wooden materials in combination with iroko sober and discreet as steel, glass or cork, which provide simplicity to their interiors.

According kanaka culture should have been built with wood from young palms.

The wood siding and stainless steel, based on the shape of huts regional kanakas provide protection from the weather when it is needed, but also allows the passage as necessary to ventilate as wind strength and direction. 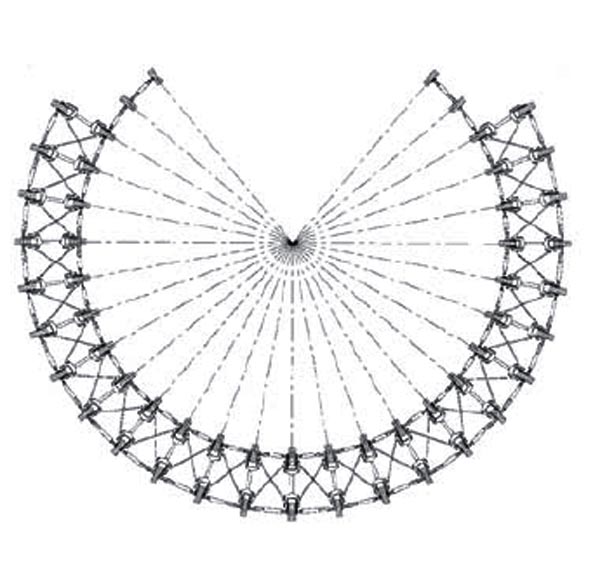 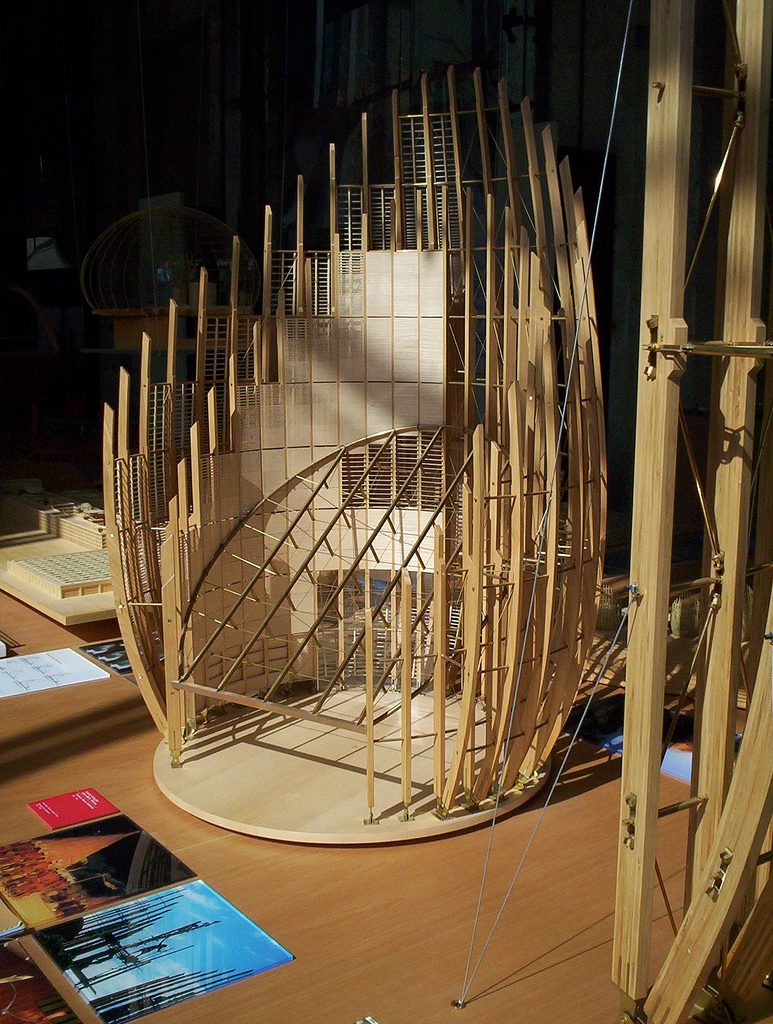 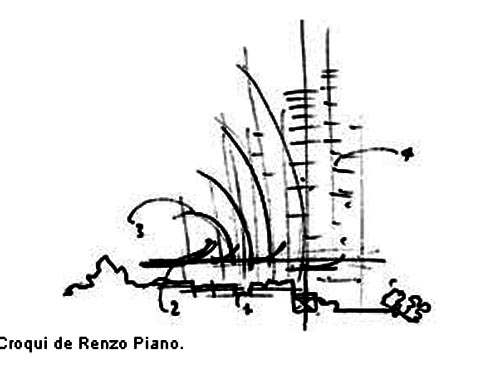 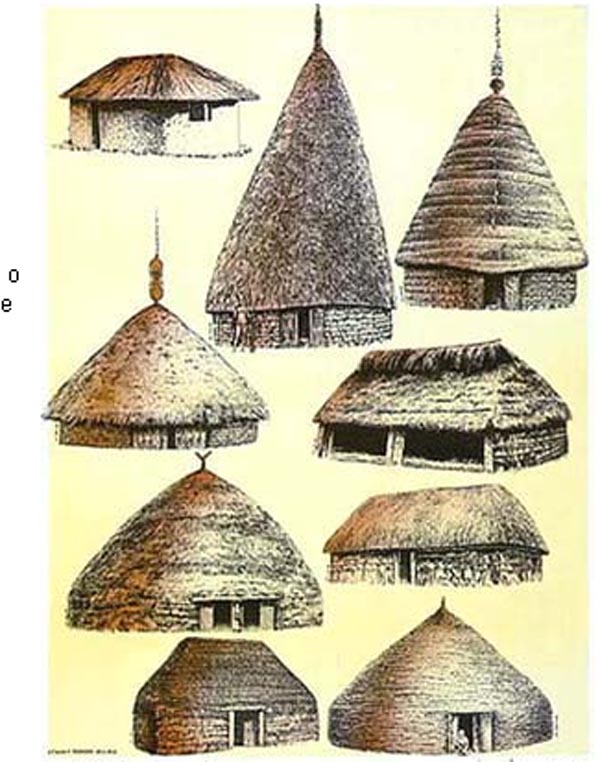 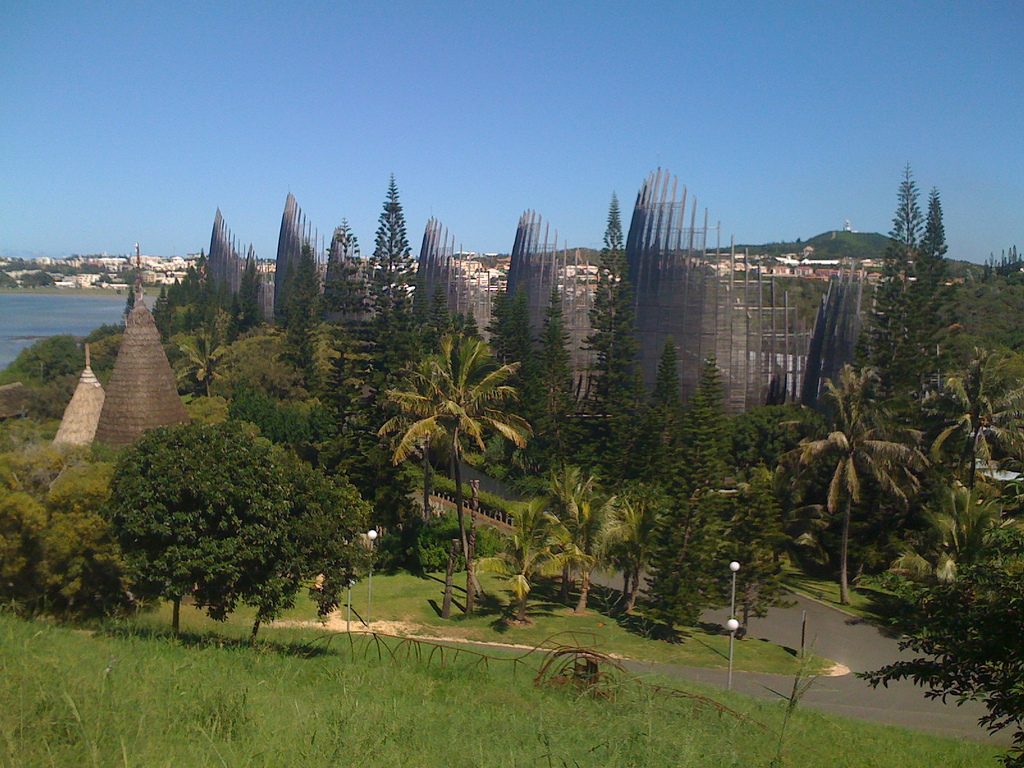 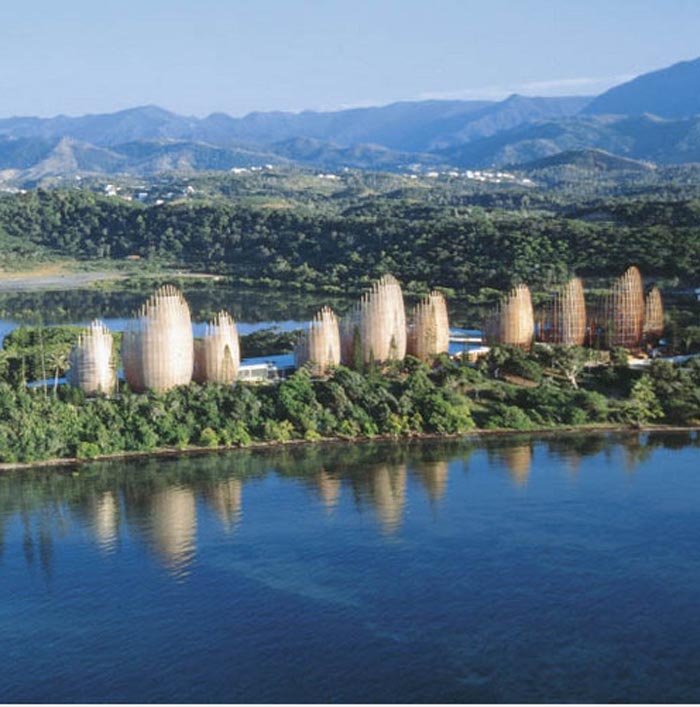 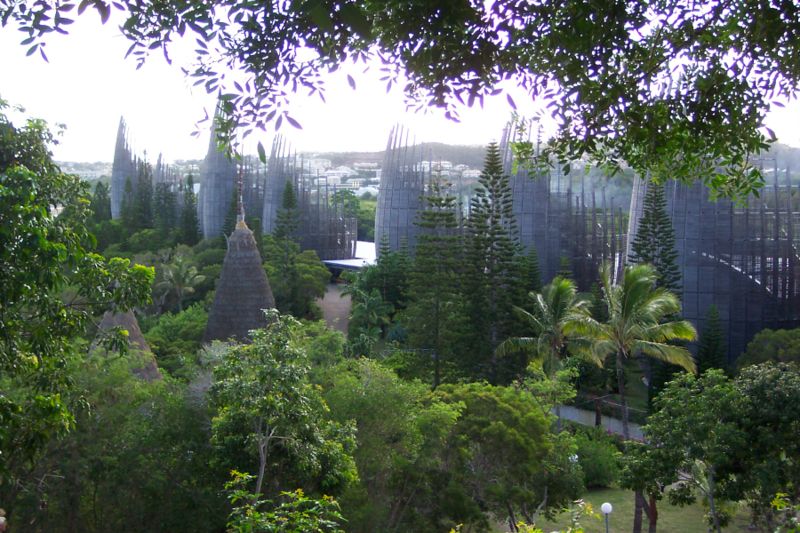 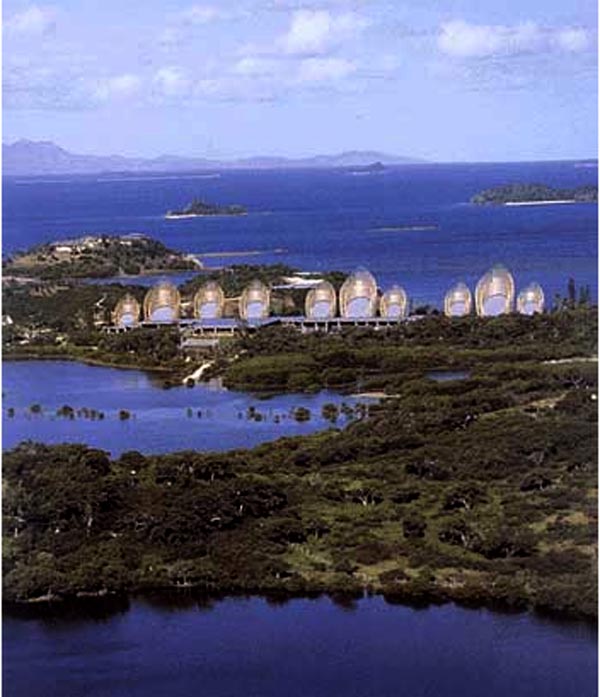 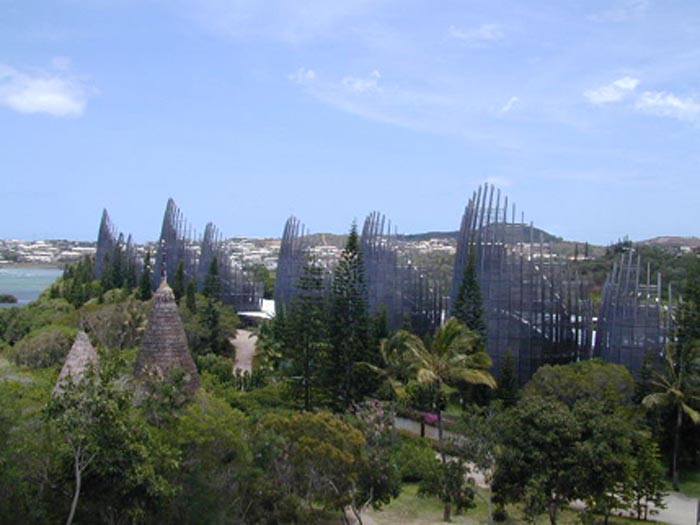 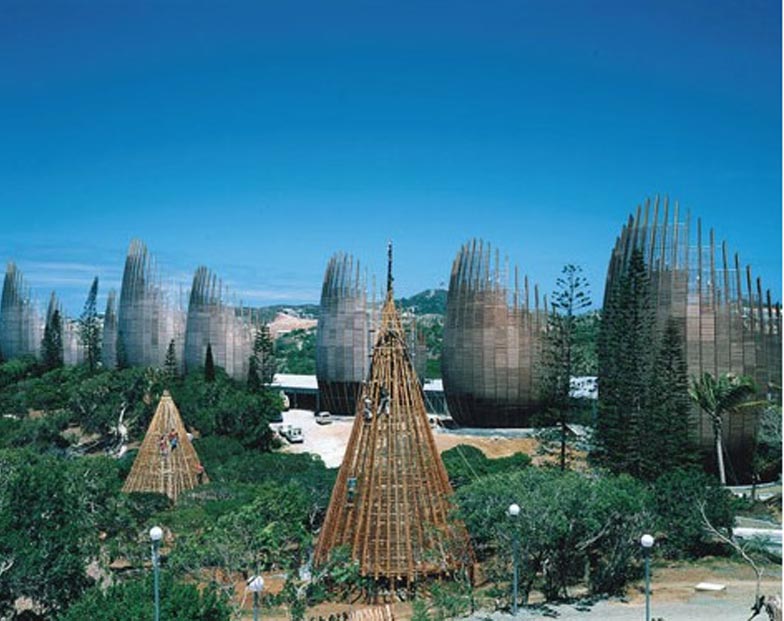 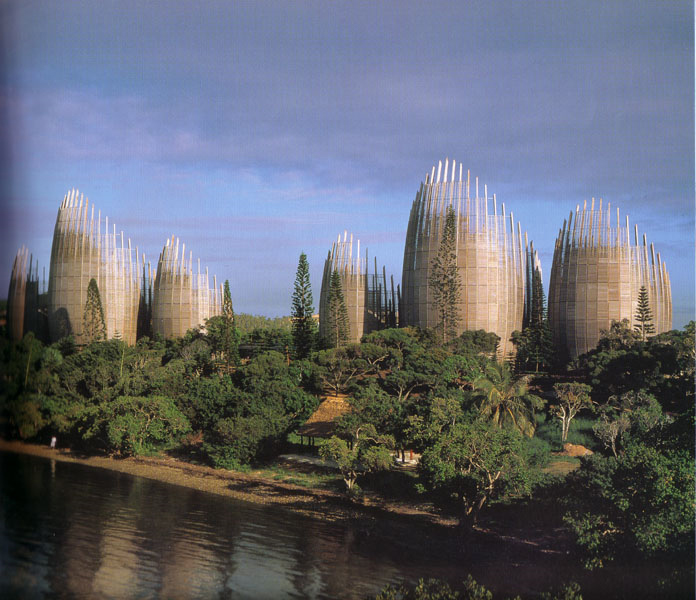 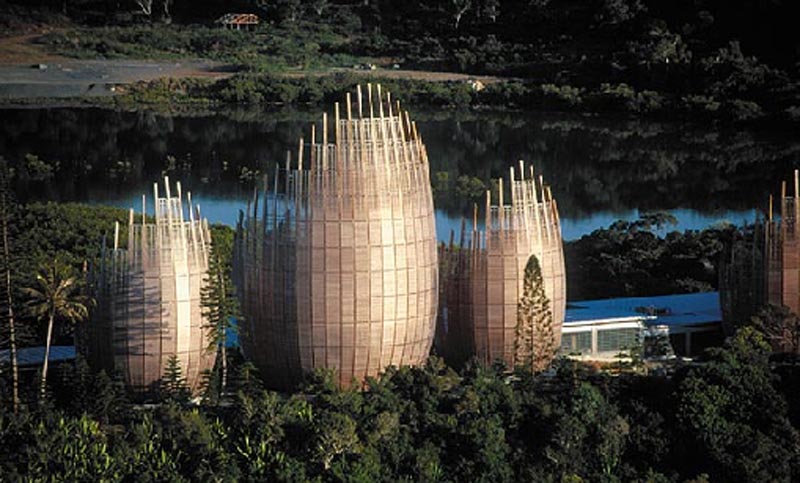 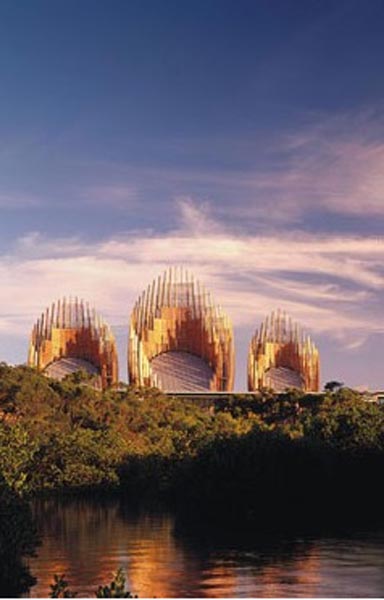 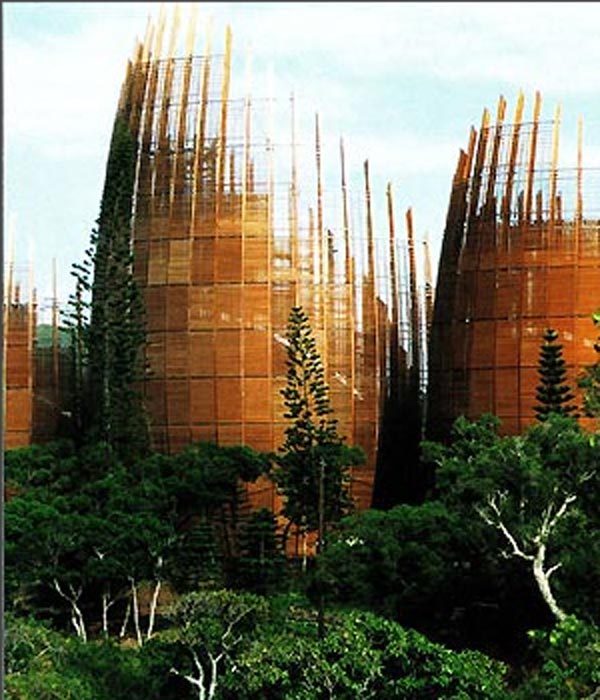 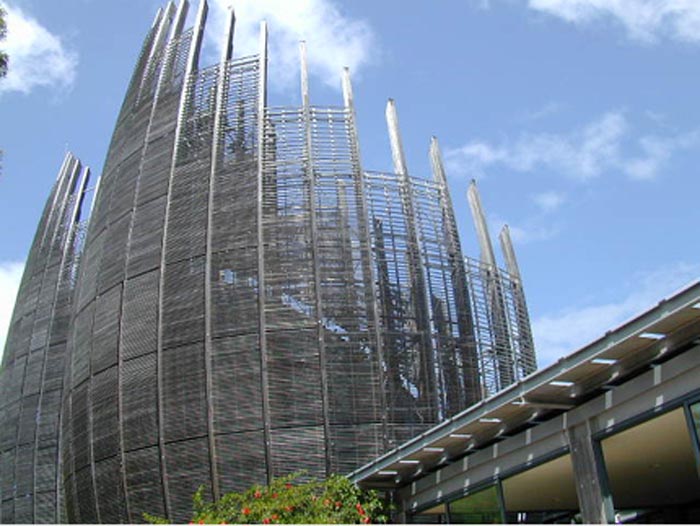 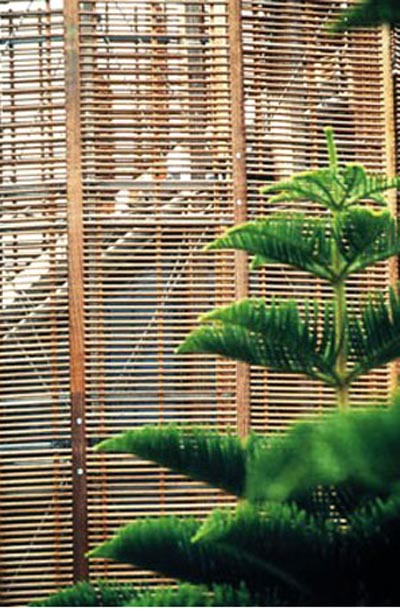 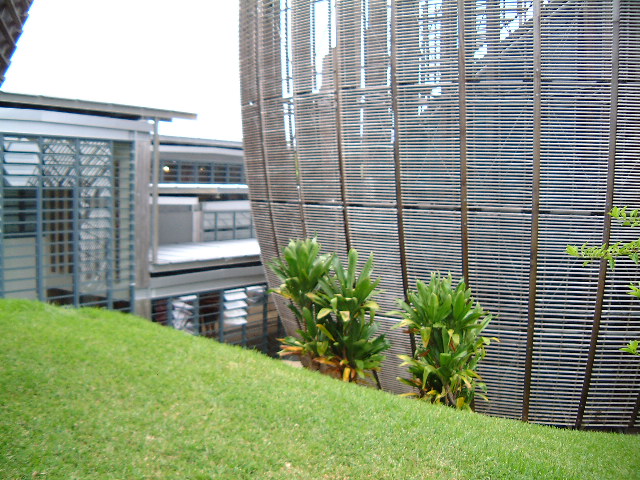 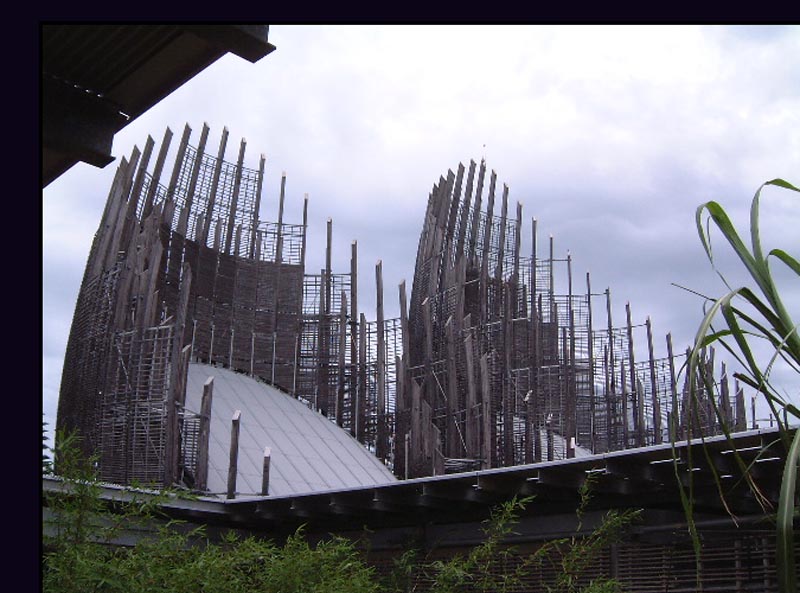 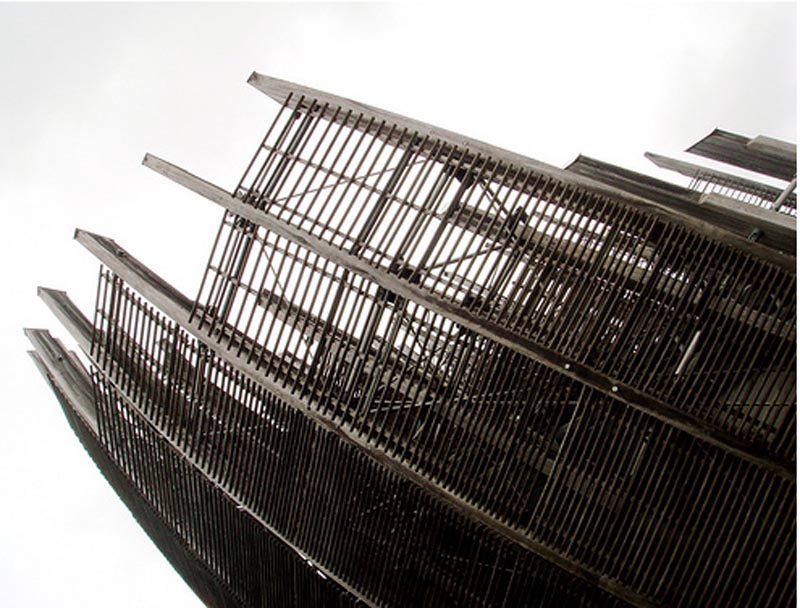 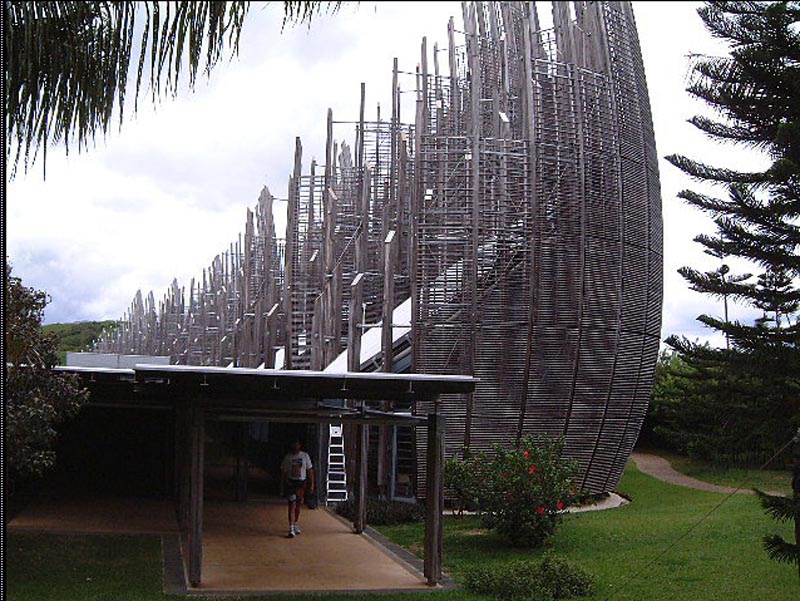 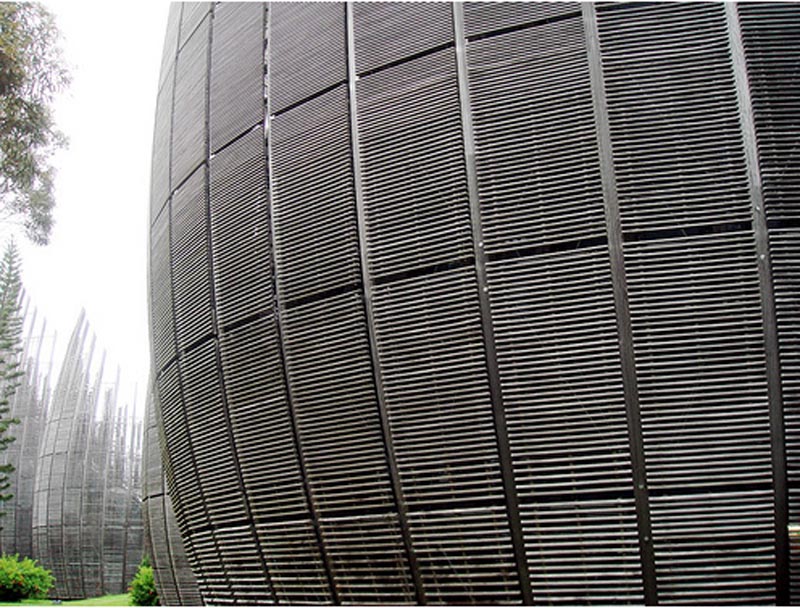 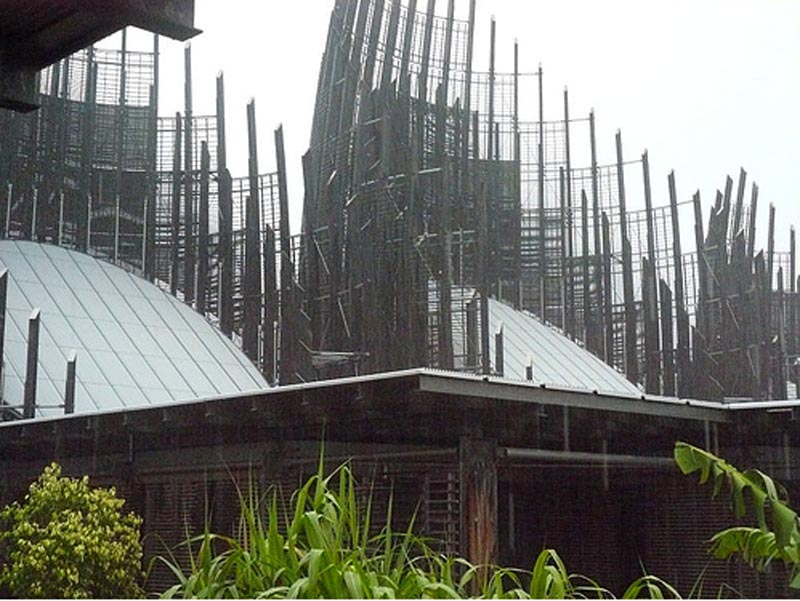 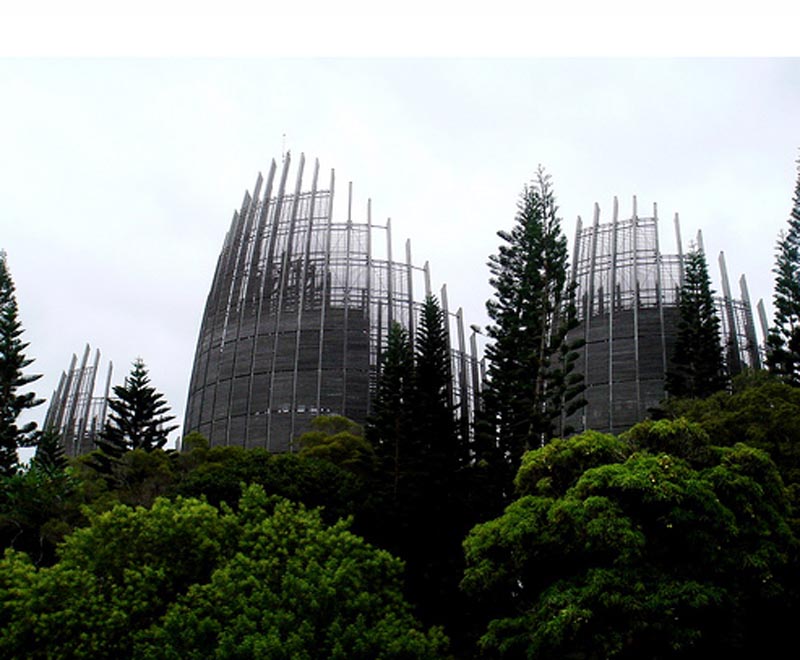 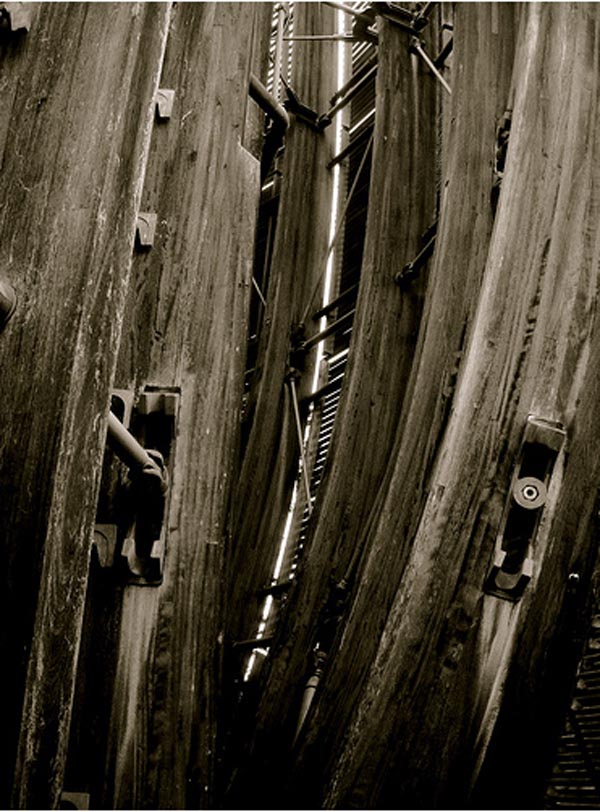 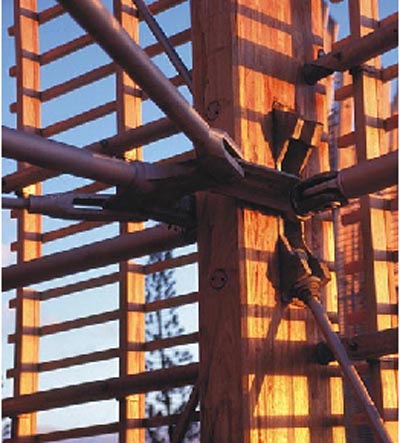 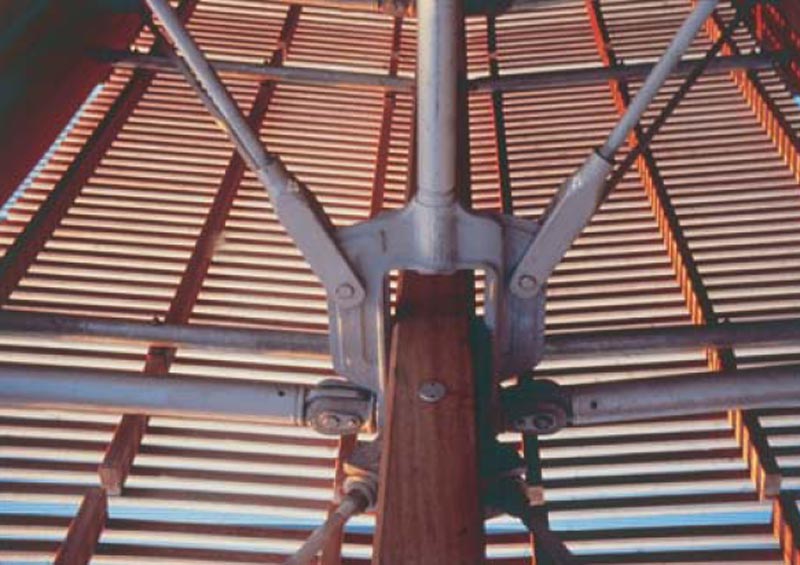 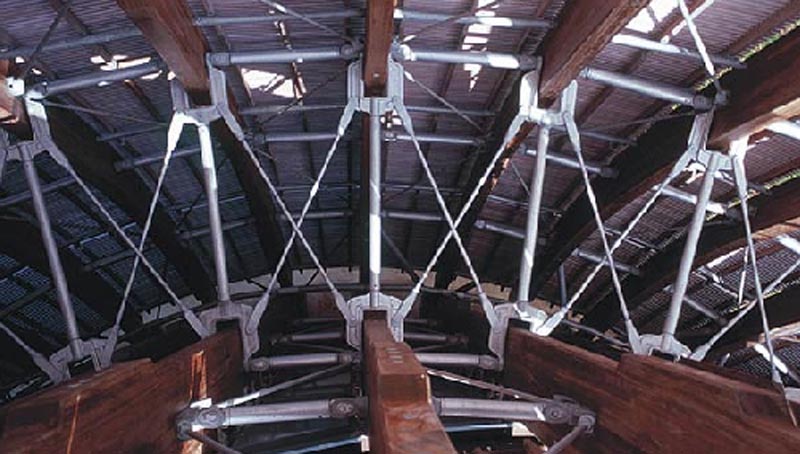 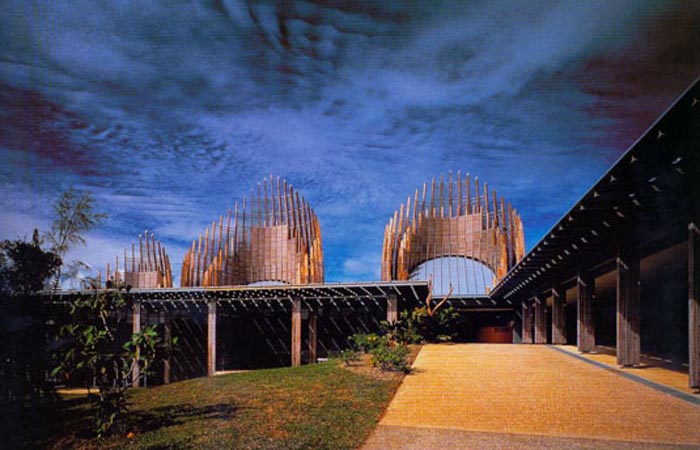