In 1955 the Rev. Robert H. And his wife Arvella Schuller founded the Garden Grove Community Church under the auspices of the Reformed Church in America, Reformed Church in America, which provided $ 500 to the young couple to start the ministry. While touring the historic Route 66, road to California, Schuller wrote on a napkin the list of 10 possible places to hold services. Upon learning that the first 9 positions already in use, embraced the tenth, the Orange Drive.

From the top of a terrace in a snack bar, Schuller offer weekly services, accompanied by his wife from a trailer playing the electronic organ, people who listened from their cars or standing on the esplanade. From this unusual pulpit, Robert H. Schuller continued to offer his sermons and gaining popularity and followers. Over time they built a chapel within walking distance for the trades, although many of the followers wanted to continue listening to their sermons from the car and outdoors.

With a congregation that exceeded the capacity of the chapel and to the need to continue offering their services to those who did not want to go into a closed, Schuller hired the services of a renowned architect of the mid-twentieth century, Richard Neutra, to design a structure that could Schuller simultaneously preaching to the congregation who came to the church and he preferred to stay abroad and participate from their car. For this church walk-in/drive-in, Schuller envisioned a glass wall that opened to the outside, allowing it to be seen, in a pulpit high, people in their cars parked. The resulting design conducted by Neutra break the rules of ecclesiastical architecture, with great success. The congregation continued to increase and expanded to other states of the union.

In the mid 1970s designed by Neutra Church could not accommodate his audience, therefore, Schuller approached the famous architect Philip Johnson to design a larger structure that would accommodate the growing congregation with open sky system, for which Johnson proposed excitedly… “That is all glass!”… design was a feat never before attempted in a seismic zone.

The Crystal Cathedral is located in the city of Garden Grove, 12141 Lewis St., in Orange County, south of California, United States.

Robert H. Schuller said: “… When the local congregation reached 10,000 and we need a bigger church, I remembered how wonderful it had been on my first drive” car-church “(where the ministry began in 1955), where there were no walls or ceiling and where I fell from the sky!.’s why we built the Crystal Cathedral, with transparent walls and roof and clear glass allows the sun and sky sparks come through our wonderful sanctuary… ”

The Crystal Cathedral is the first great church, designed and conceived to be a “study” of live television to convey his congregation Christian worship, which allowed it to be observed by the international architectural community and recognized as a beautiful and creative building.

The architect Philip Johnson and his partner John Burgee, have called this work his “capo lavoro”… the greatest achievement of his career… a dream come true.

The Crystal Cathedral, with a plant in the form of four-pointed star, occupies 126.49 m long, 63m wide and 39m high. Its size is reinforced by glass cover that surrounds the building. The sanctuary seats offered in 2,736 people, including 1,761 seats on the main floor, 346 seats in the balconies of East and West, and 283 in the South Balcony.

A large presbytery to participate over 1,000 singers and instrumentalists. Behind the pulpit two tall doors, 27.50m, electronically open to allow entry of the sun and improve services with the warm breeze.

The pipe organ of the Cathedral, which was made possible by a donation, is the third largest pipe organ in a church in the world. Conceived by the virtuoso Virgil Fox, joins the virtues of Aeolian-Skinner organ of Avery Fisher Hall at Lincoln Center in New York with Ruffatti organ built for the old sacristy in 1977.

There have been numerous additions and improvements over the aforementioned bodies: piping are 287 rows and more than 16,000 individual tubes from two consoles executable all manuals. The white oak box has nearly 11,000 tubes in the chancel area also includes a stop of 44 tubes 9.75m pedal. The divisions of the organ in the South Balcony containing 5,000 pipes, and on the balconies of the East and West are 549 horizontal trumpet pipes, the largest collection of this type of tubes in the world.

On the tenth anniversary of the Cathedral, held on September 16, 1990, opened a bell tower 72m high, one of the tallest structures in Orange County. Philip Johnson designed a carillon with 52 bells named Arvella Schuller, in honor of the pastor’s wife. At the base of the structure was created an intimate prayer chapel named Mary Hood Chapel.

The support structure is a steel structure triodetic. Is designed to operate like a giant chimney, allowing heat to rise out of the building and greenhouse avoid.

The shape of the building is a four-pointed star, bigger than the Cathedral of Notre Dame of Paris.
Huge pillars of white concrete balconies remain in place. These columns are hinged at its junction with the balconies and the ground to allow movement and able to cope with earthquakes up to a magnitude of 8 on the Richter scale. They have also passed tests in the wind tunnel to 161 km / hr.

More than 10,000 panes of tempered glass, silver is held in place by a lace frames created with white steel beams. These 16,000 trusses were manufactured specifically for this engineering.

On the basis of 20,000 tons structure were poured concrete. All concrete has a white marbled appearance.

The area of ​​the sanctuary is built Rosso Alicante marble, mined in Spain, cut and polished in Italy. The altar table and pulpit are of granite, and the high cross, 5.85m, polychrome wood with gold leaf 18 Kl.

The bell tower is constructed of stainless Needs Actionor plates with a polished mirror, which catches the light in all directions

Years Ahead of its time in the design of conservation, the Cathedral does not have air conditioning, trusting your HVAC to natural streams and fresh air flowing from the ground level through clerestory windows with opening thermostatic system and closing.
Also part of this cooling system the two spectacular 27.50m tall doors that open to the right of the chancel, a feature inherited from the sanctuary designed by Neutra.

Heat flows from an underground pipe to regulate the temperature in the cooler months. 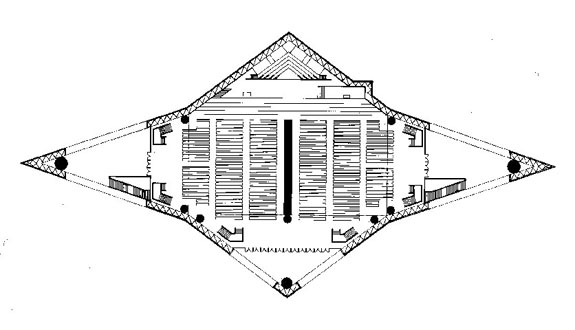 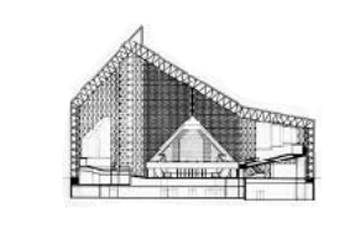 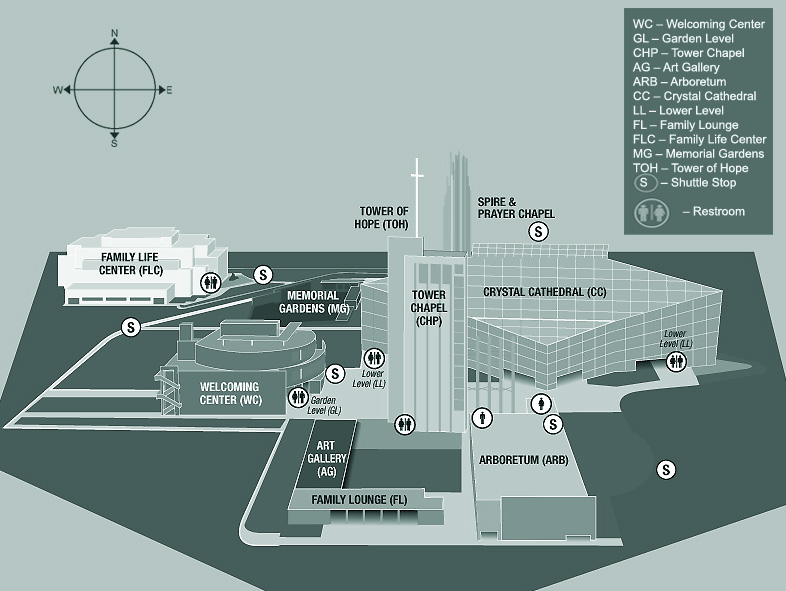 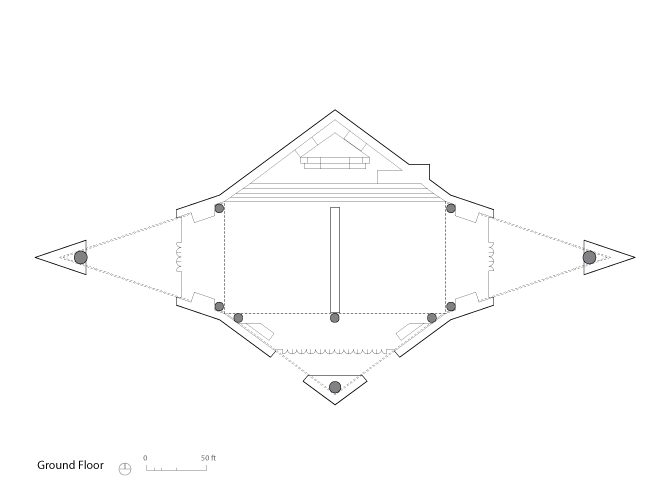 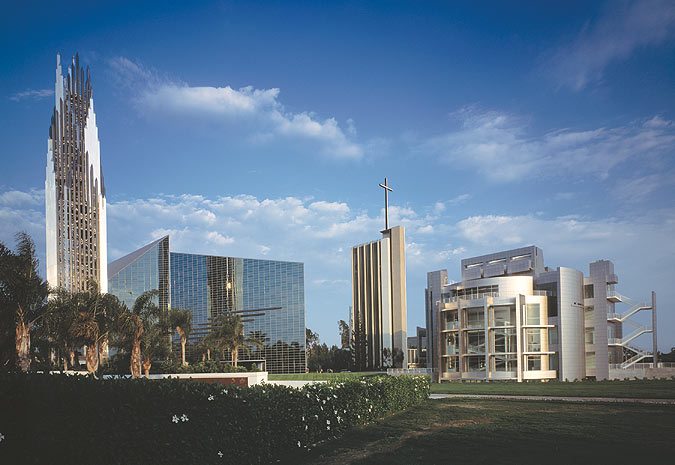 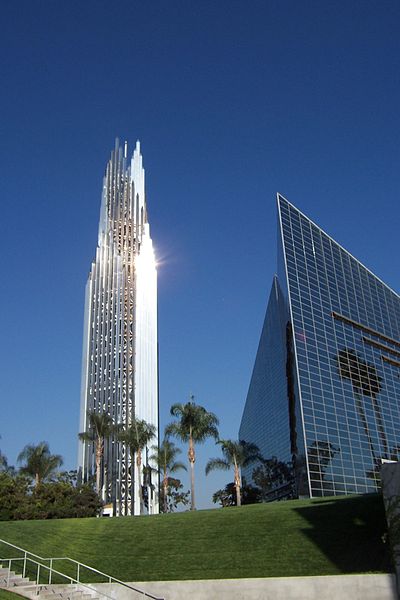 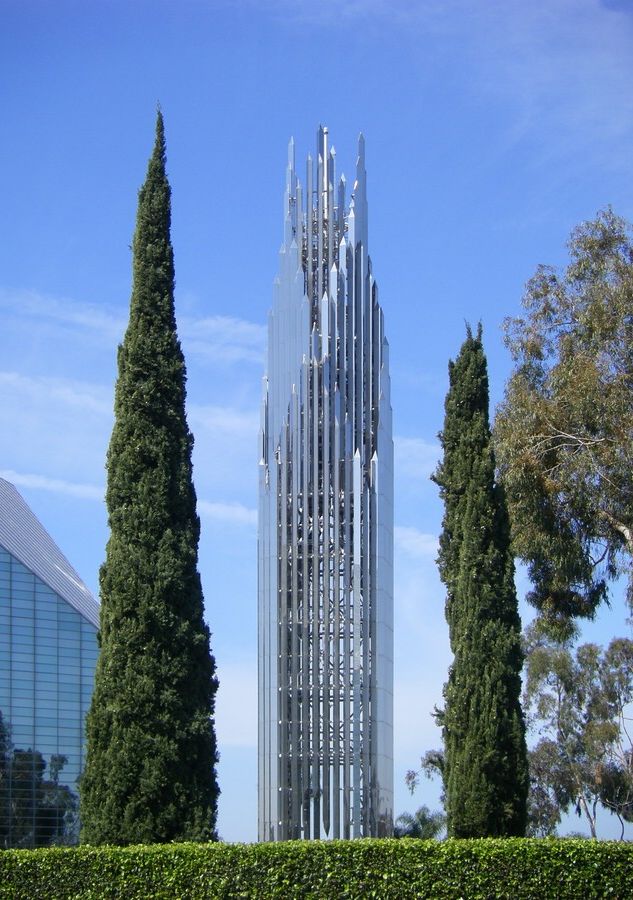 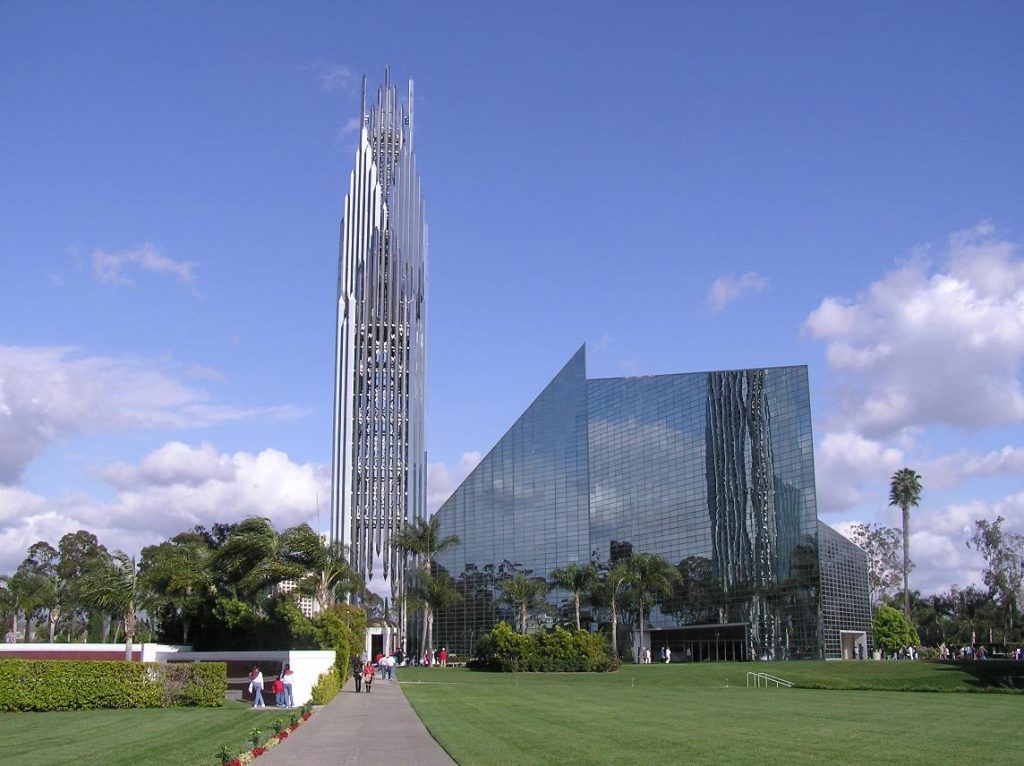 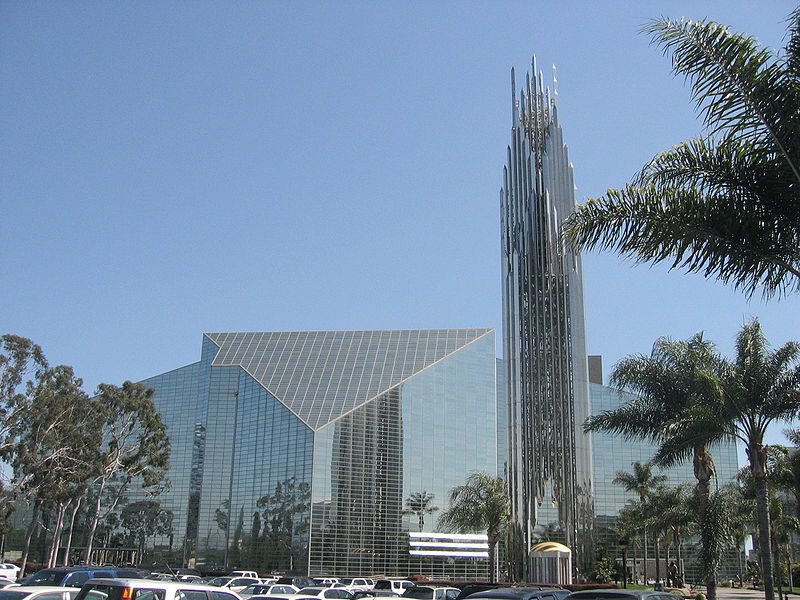 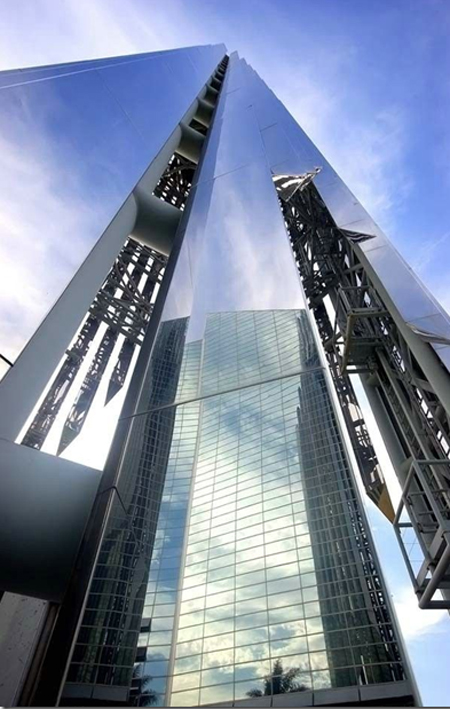 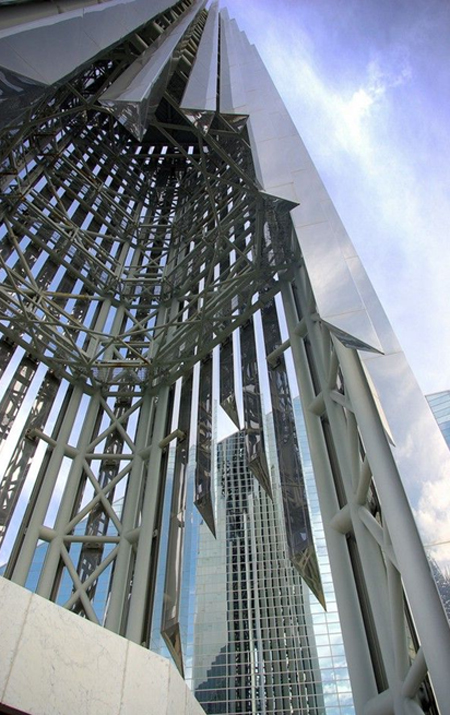 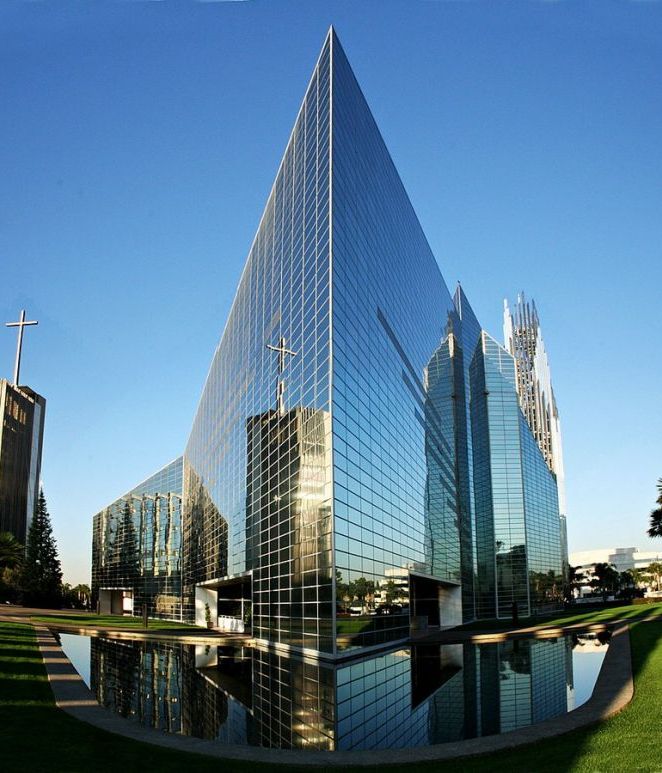 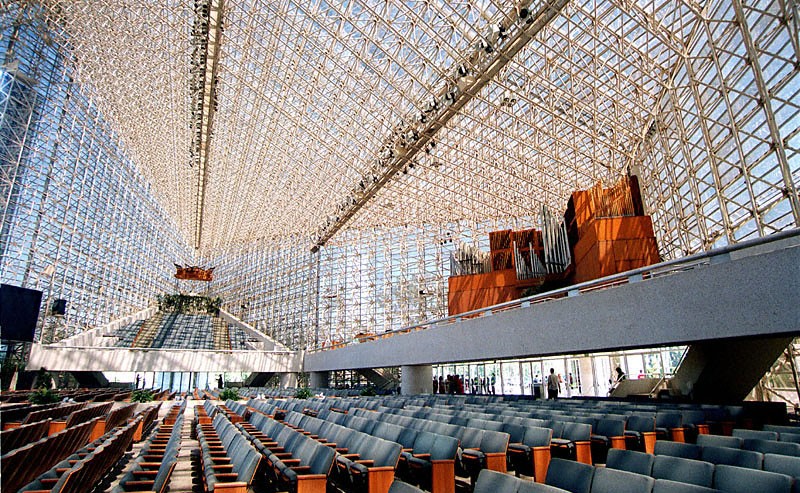 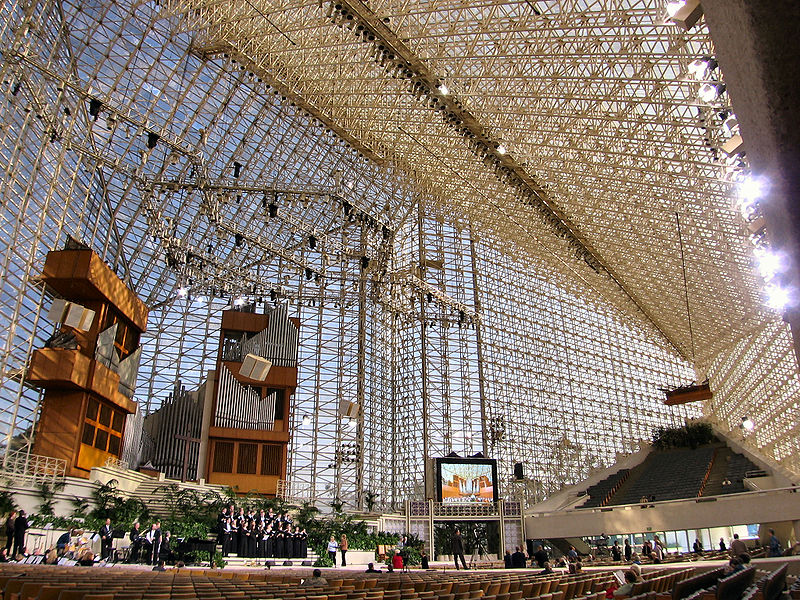 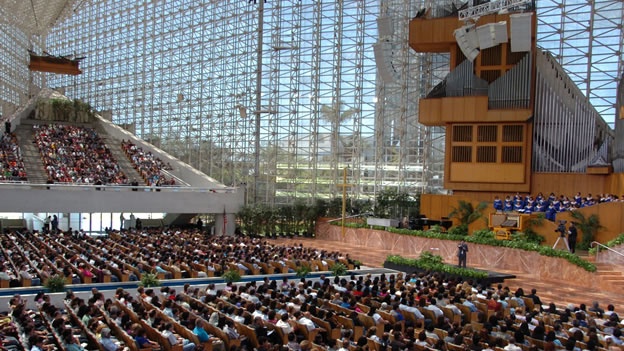 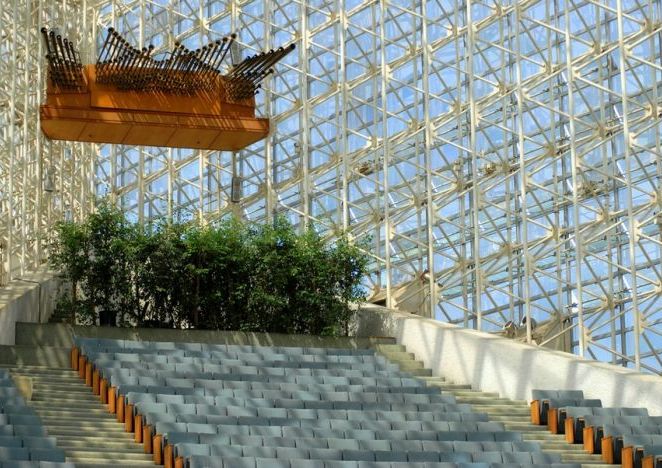 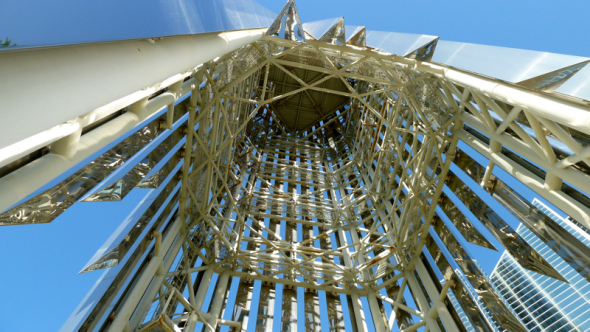 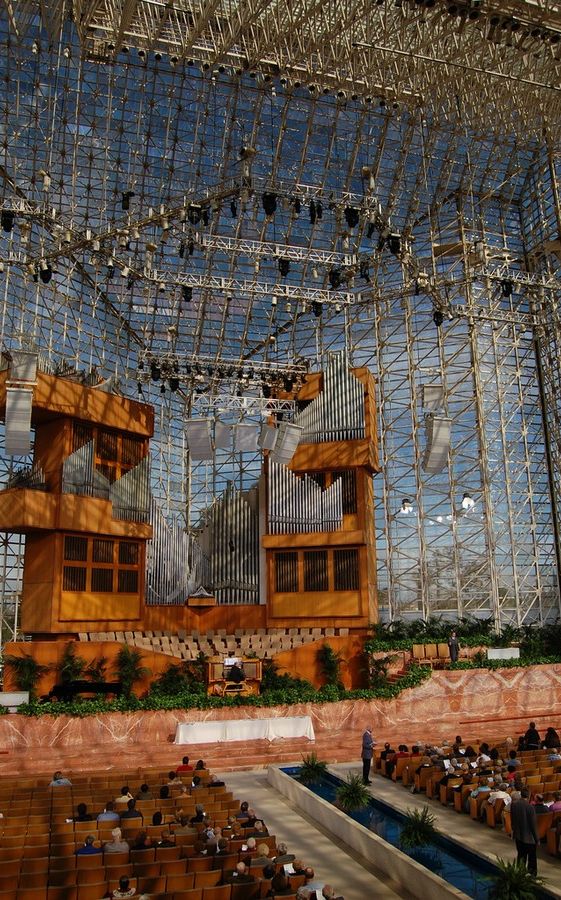 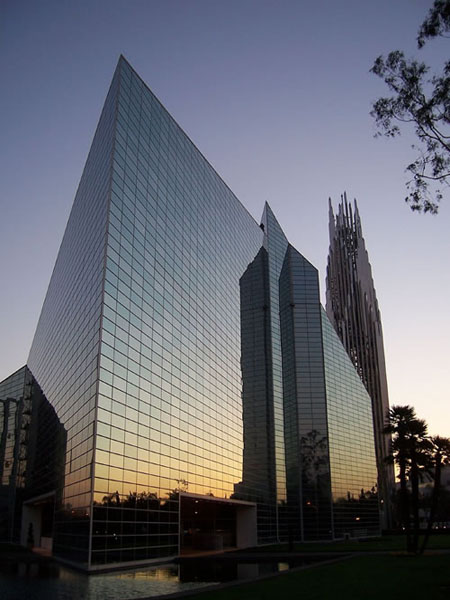 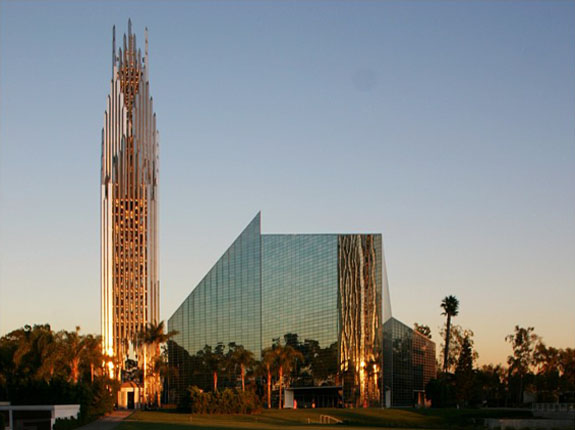 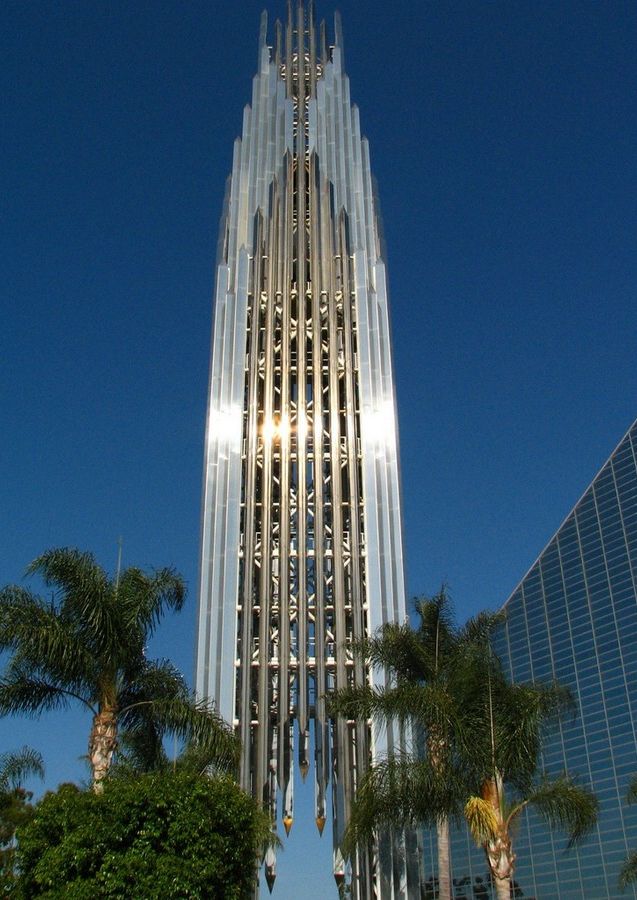 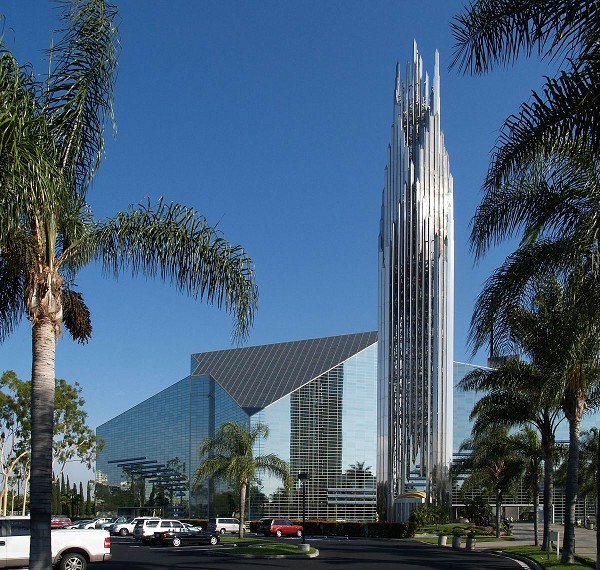