Crown Hall is one of 20 buildings designed by Mies van der Rohe for the Illinois Institute of Technology (IIT) in Chicago. This is the centerpiece of a masterplan for the campus founded in 1940 that covers approximately 50 hectares, the highest concentration of works by Mies in the world.

His approach is certainly innovative, but it is art that makes the implementation of the IIT campus a destination for international fans of modern architecture. Here, Mies Van der Rohe had developed and perfected the modern architectural grammar of the language, its ideas, structure, proportions and geometry.

The American Institute of Architects appointed IIT one of the most significant of the twentieth century. Crown Hall, is the most famous buildings built in 1954 with an innovative technology combining steel and glass.

Mies’s original plan for the campus was centered on two main buildings, a campus for students and a library. However, it had to adapt their plans to economic restrictions. It was not until the prosperous post-World War II when the architect was able to create his great modernist monuments, including Crown Hall, a building to house the School of Architecture.

Mies designed a new building far more ambitious and daring than the existing one at one end of campus. However, during its construction, had to face numerous obstacles, such as the initial resistance of the University Council who thought it was a very expensive. Overcome this, there was opposition from the building inspectors from the city who claimed that the columns were fire proof, it should be coated with concrete. As the whole design has been lost Mies chose to register the building as a warehouse, thus avoiding having to meet fire resistance standards.

Another problem encountered during the work was a fire that occurred at the specific heat as the building was in a very low winter temperatures and the material is frozen.

The last objection that was faced by the architect designed the stairs without handrails. Upon receiving the inspector’s visit and check that the site was not working as a warehouse and had been classified, said that safety of students should be placed. Today, the design of the railing out for its elegant minimalism.

Overcome all these obstacles, in 1956 completed the building in which Mies designed his two obsessions: maximum and minimum transparent structure.

In August 2005, a major building renovation that recovered after many years without maintenance. Improved accessibility and functionality, energy efficiency and environmental restoration and was a general who came to Crown Hall to its original image 1956.

The Illinois Institute of Technology is located four miles south of downtown Chicago. Crown Hall is situated practically in the center of campus, near the metro station and the main station, making it one of the buildings with the best location within the university. This is because Mies considered him one of his masterpieces and one of the landmarks of the IIT in Chicago.

The streets surrounding the building on campus are separated by green areas that isolates it from any noise.

Each building is separated from the other. They averaged a height of 3 or 4 levels which ensures that not obstruct the view or natural light. From the inside of buildings can be seen north of Chicago skyscrapers.

The four sides of the building permit free entry of light and use the views. Crown Hall is oriented south to north. The main entrance is located on the south facade, allowing cover to enter the workshop, with the profile of the city of Chicago as the background light in the windows of the north facade. The building also has this orientation so that the lighting is natural light main north-south and not east-west, which is usually more intense and difficult to control up to prove troublesome in many cases.

The building is configured as a self-contained in a rectangular shape on two levels.

Is a free volume with its four walls of glass, surrounded by a large green area, with large trees, mainly in the south facade. The glazing on all sides that allows the faculty do not give back the rest of the buildings, while respecting the context.

It is characterized by an industrial aesthetic of simplicity, clearly stated in their steel frames.

The building is divided into two levels: the main floor, shaped like a large space and a semi-buried where they are located the offices, meeting rooms and services.

The main floor, which occupies 50% of the building, comprising a single glass-enclosed space devoted to the study of architecture. Mies called it a “universal space” to be totally flexible in its use. The divisions that has very few moving parts, made with lightweight panels that allow you to place the space as required.

The vegetation surrounding the building a calm working environment, helps regulate the sunlight on the glass facade and makes the view much more pleasant for users inside the building. The building itself is designed for the benefit of users and not only as an aesthetic element as we can think of many instances if you have not studied the work.

The facades of glass create an open environment, giving the feeling of working outdoors in a park, with the view to the skyscrapers of Chicago and vegetation.

The cover 36 x 67 meters is based on a series of exterior columns of steel that are placed tangent to the wall and are related through jácenas song visible on the steel deck.
This technique allowed to cover important Mies lights without intermediate support and maintain a standard thickness forged.

The plant is semi-supported in a frame of columns 6 x 9 meters.

The main materials are steel, reinforced concrete and glass.

In 2005 the restoration of the original painting of the steel structure was replaced by a black lead-free coating. The glass was replaced in its entirety by panels that meet the wind load requirements. The surface of the travertine terrace in the south was replaced. The interior wood panels and cabinets were replaced. Were added and electrical wiring to the main floor. 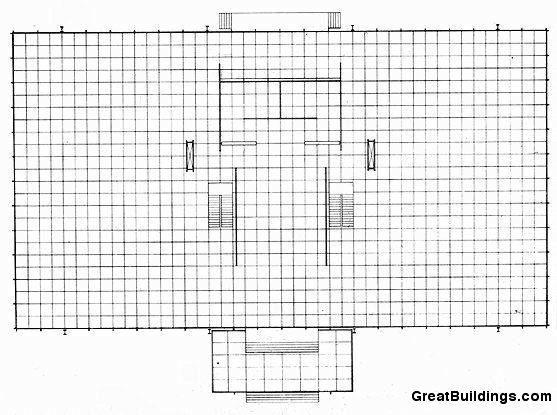 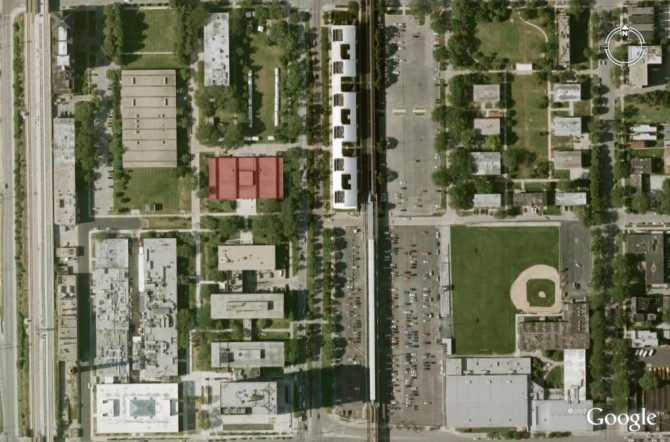 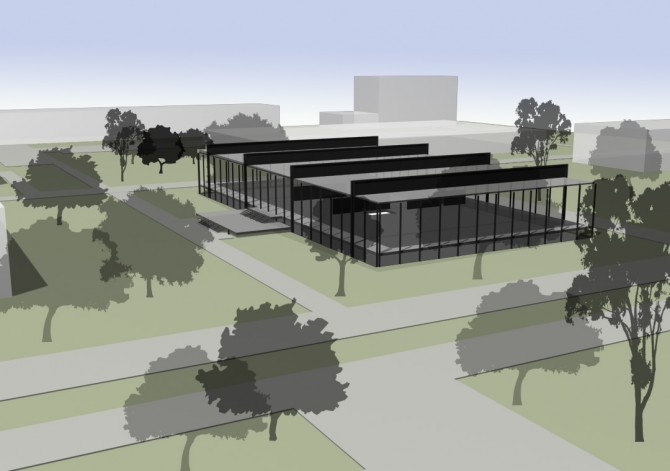 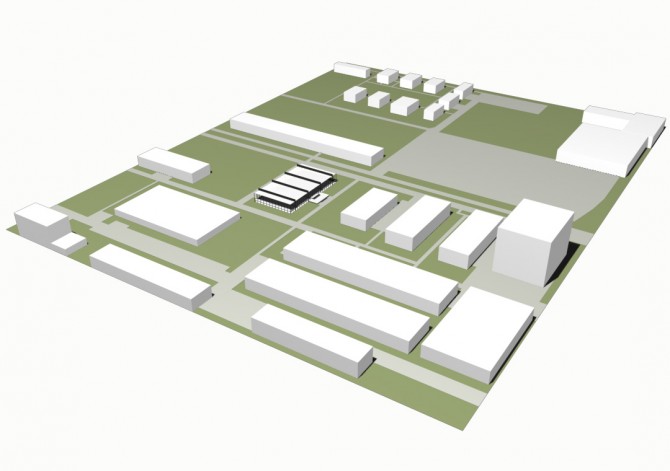 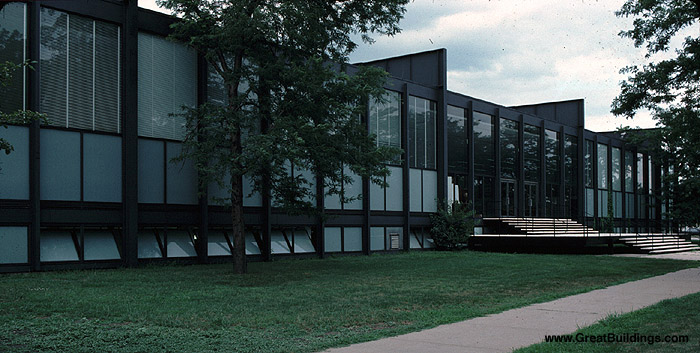 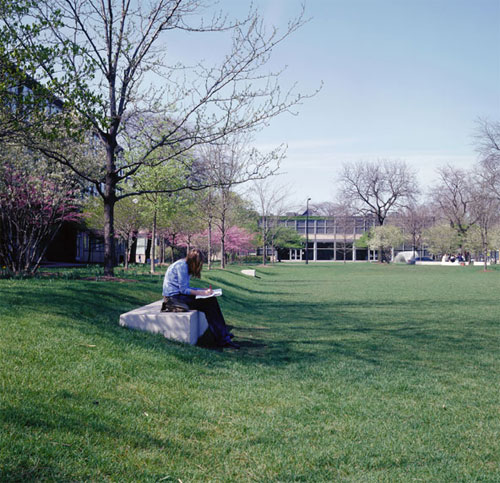 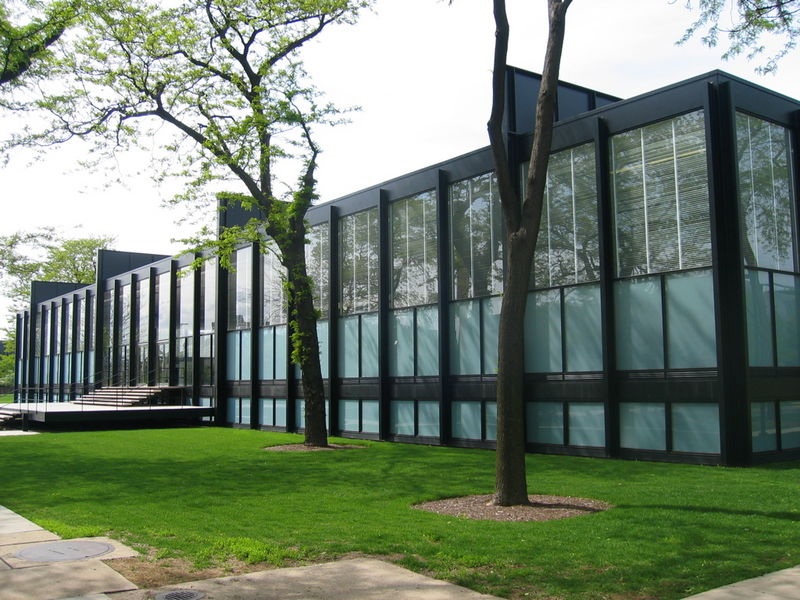 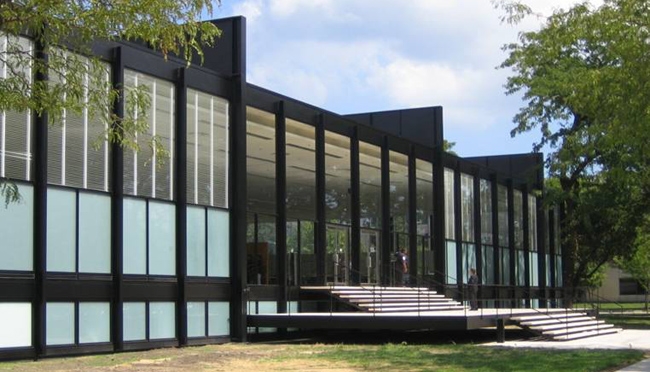 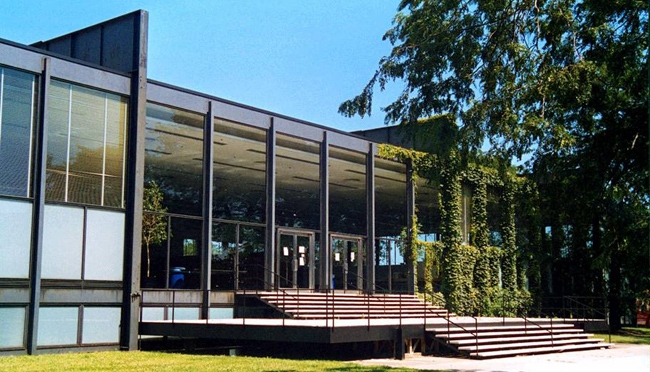 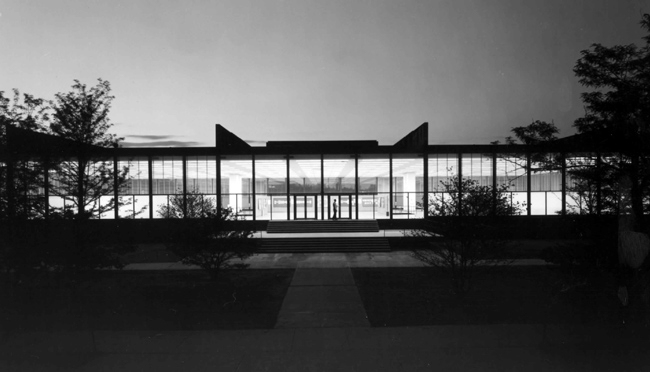 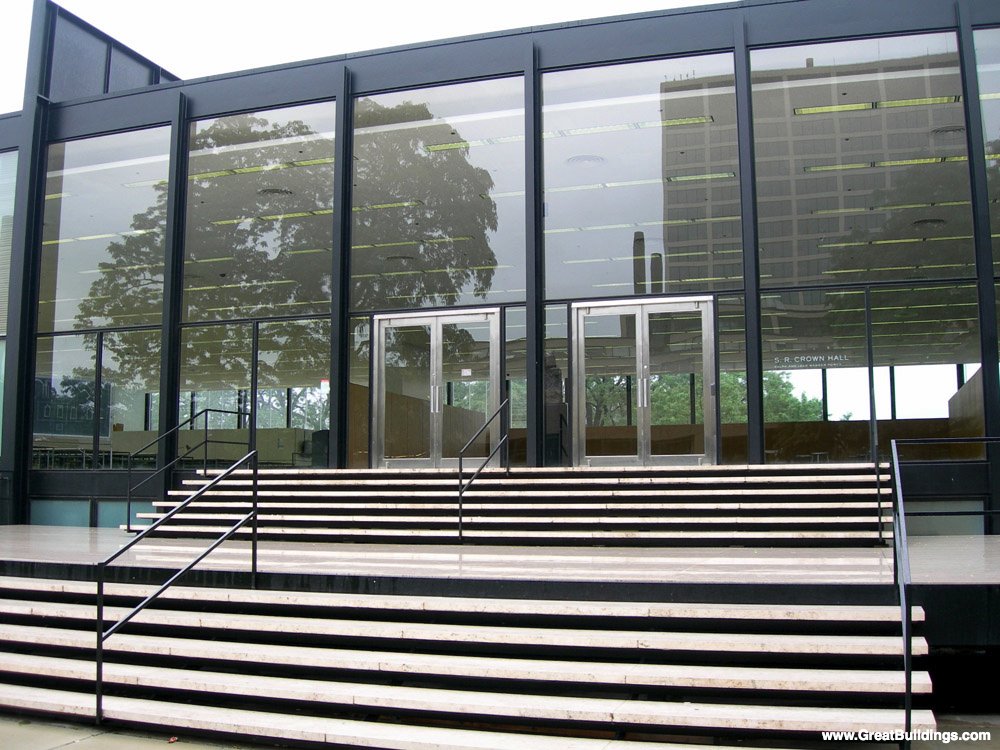 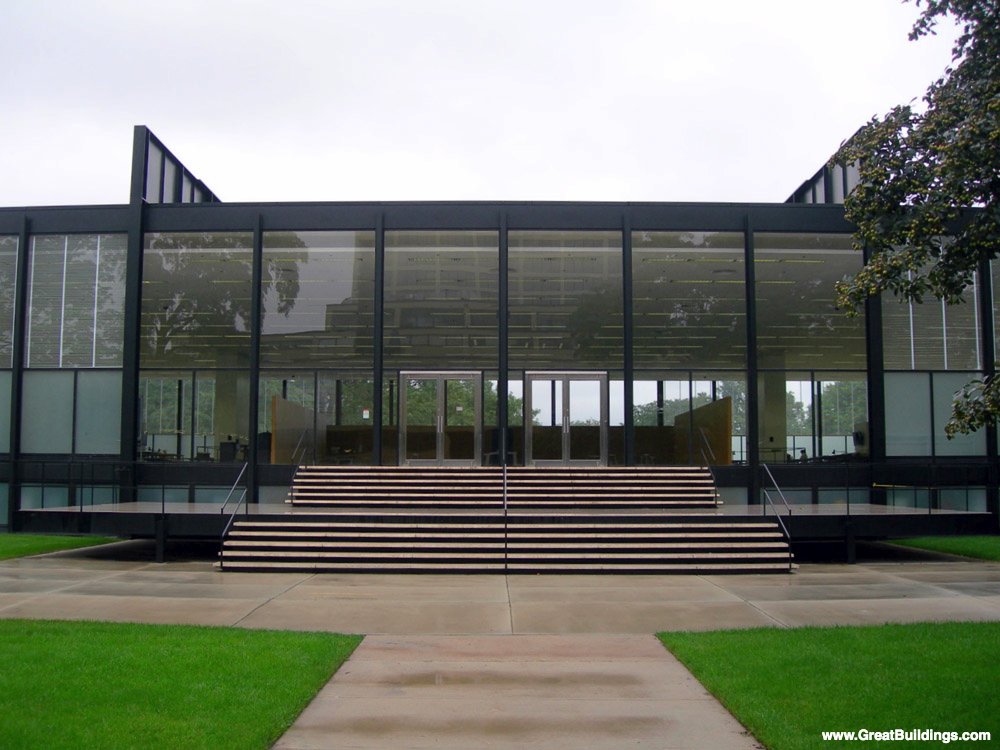 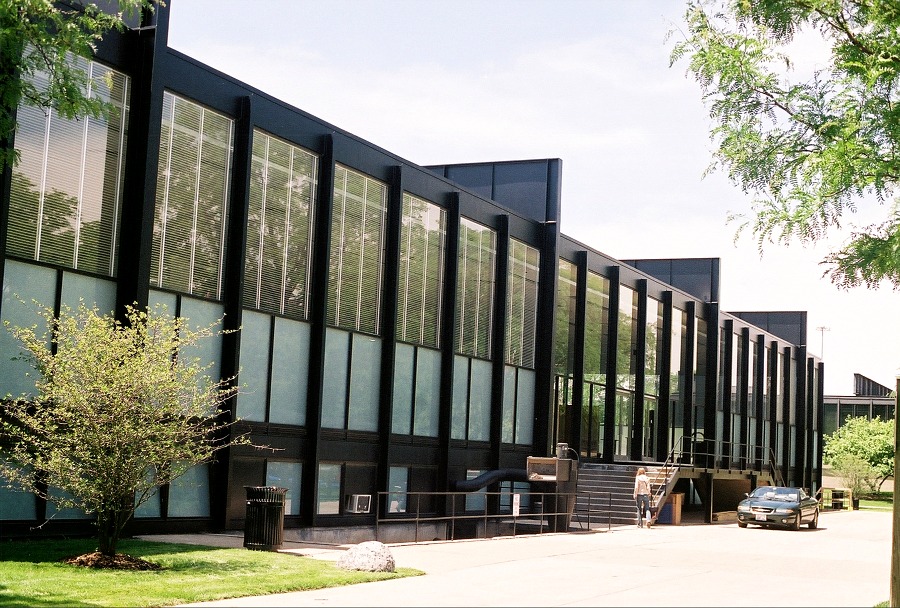 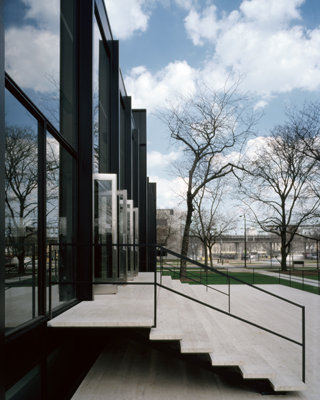 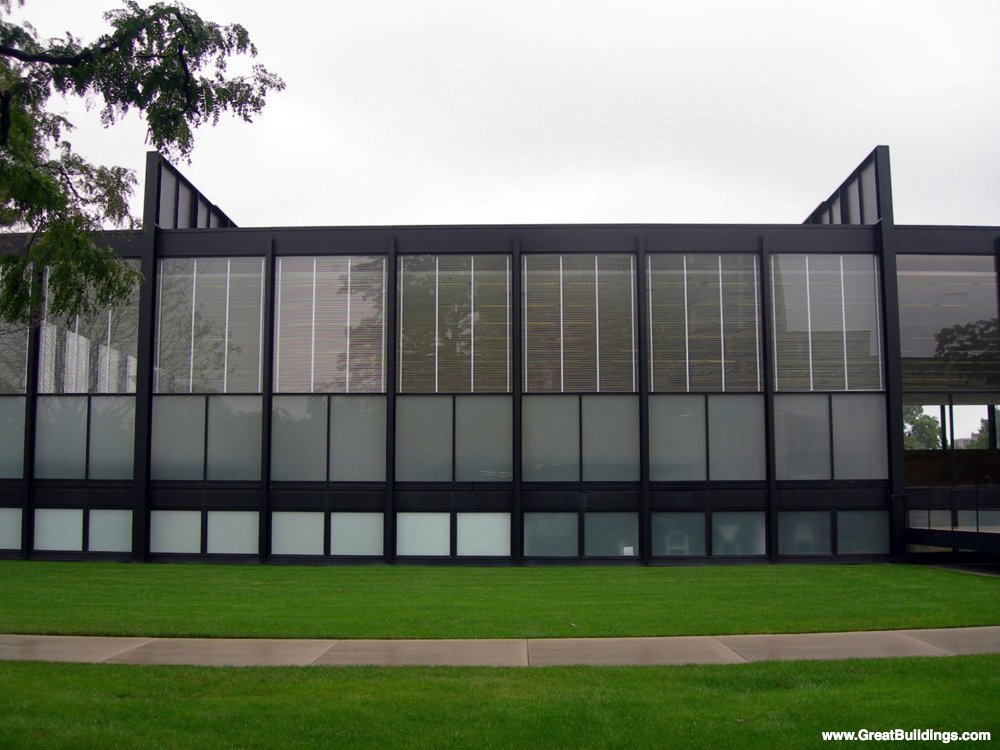 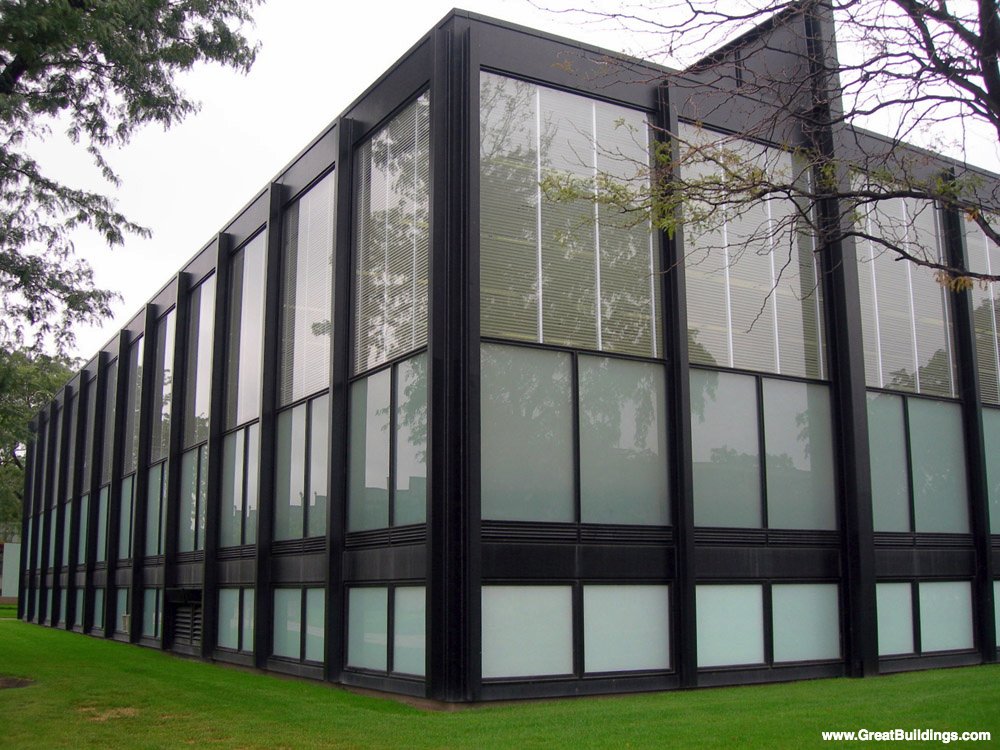 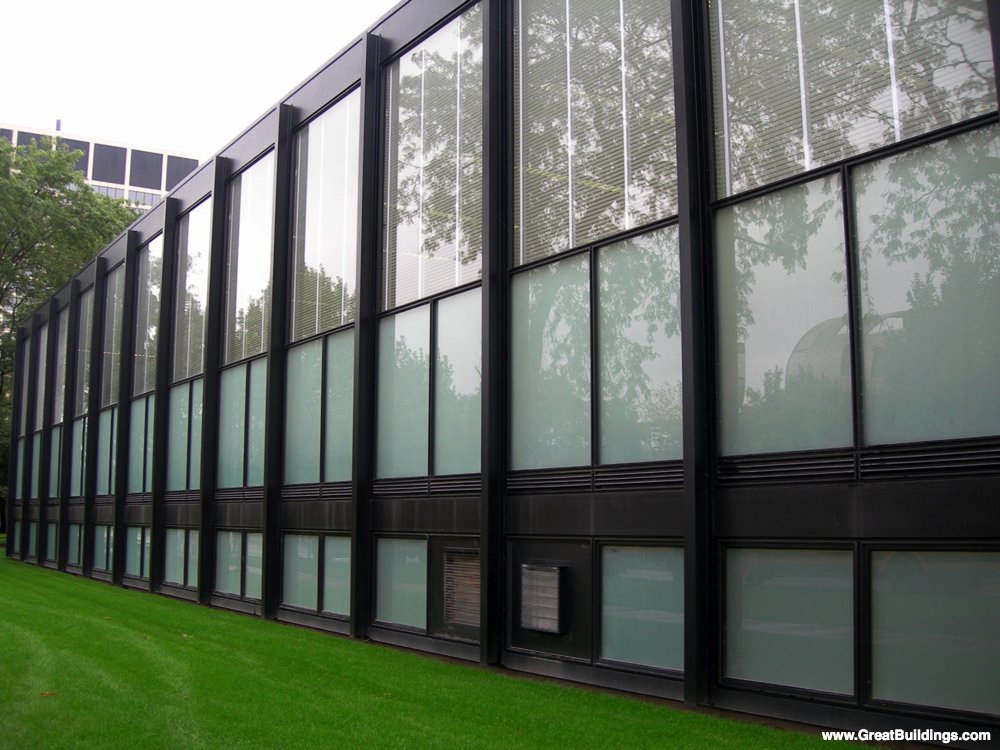 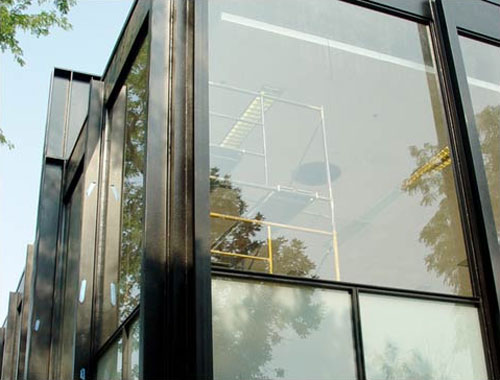 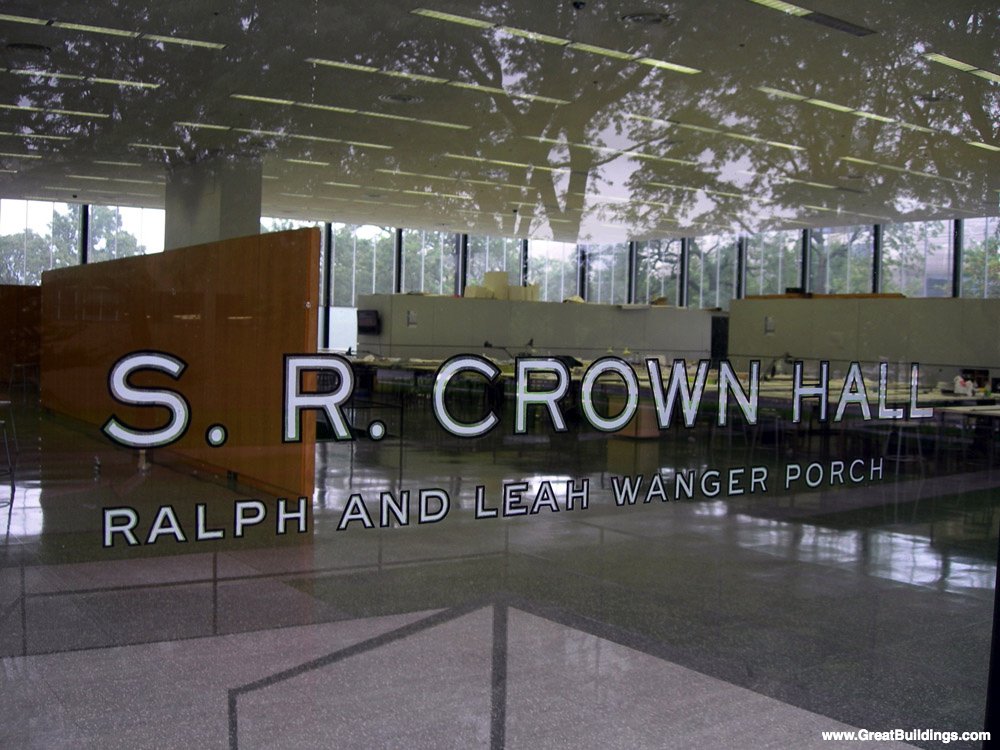 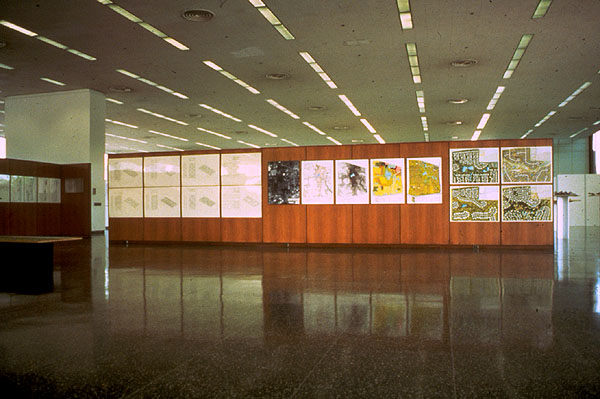 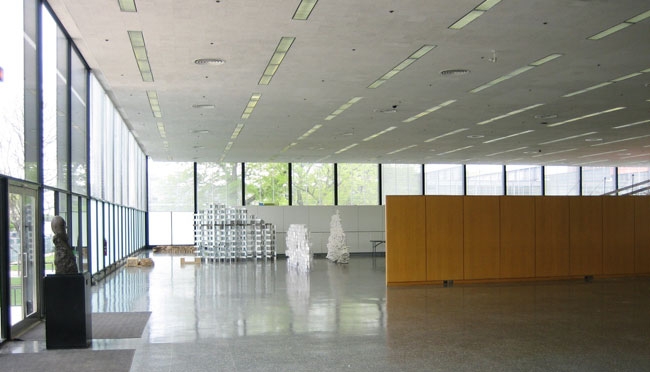 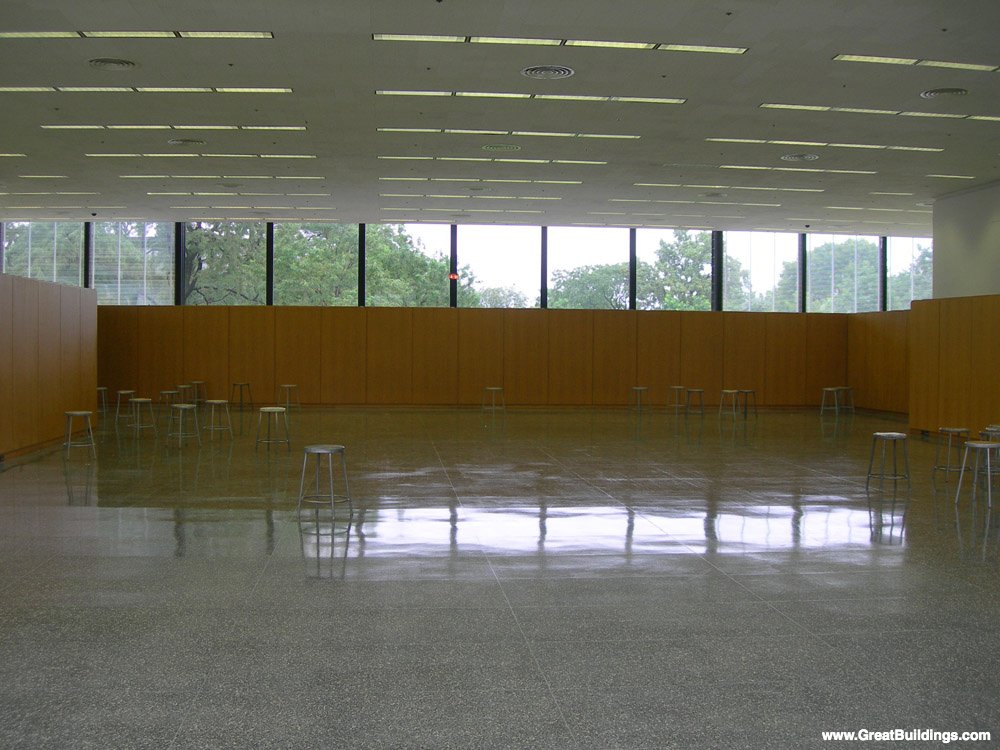 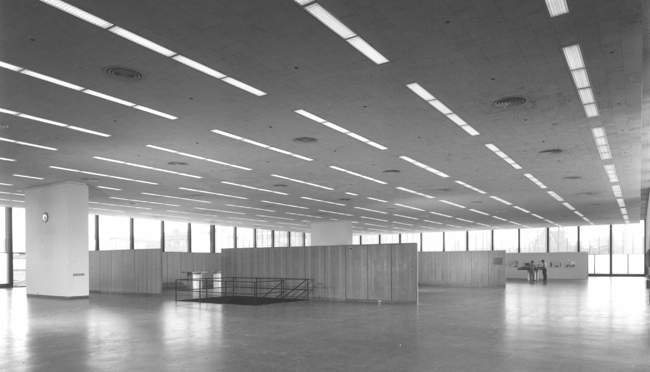 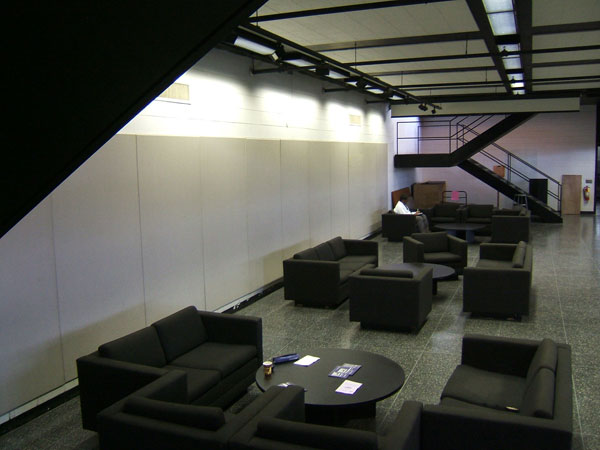 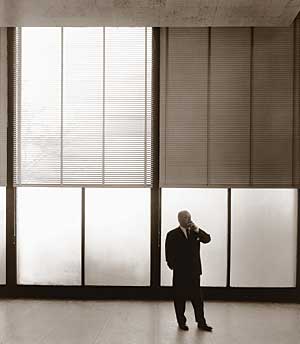 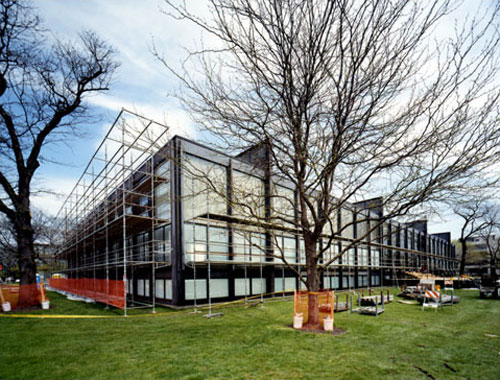 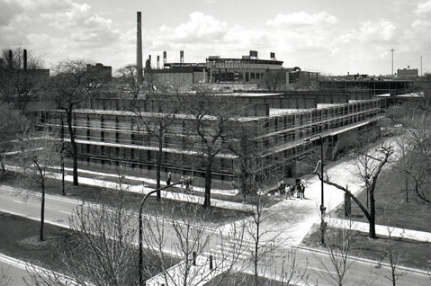 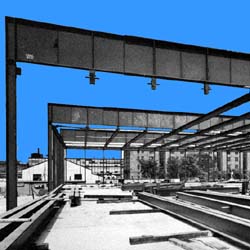