Sound-deadening walls and furniture route for a new stretch of 32 km on the highway linking the Hume Highway to the ring road Melbourne, designed by architect Tonkin Zulaikha Greer in collaboration with Taylor Cullity Lethlean landscape architect and the painter and sculptor Robert Owen, was also involved in the creative design concept and molding of all elements.

The focus of this project becomes an independent experience of the destination, and this highlights the depth of skill and sculptural possibilities that landscape architects can bring to an infrastructure project multi – disciplinary large scale.

The Craigieburn Bypass has received numerous awards, including:

The road – Hume Highway is a major road development of Australia, traveling 807 miles between Sydney and Melbourne. The road is called ” Hume Freeway ” in Victoria, also between Prestons and Berrima, and ” Hume Highway ” in New South Wales. It is part of the AusLink National Network and is a vital link for road freight to and from the two cities as well as serving Albury -Wodonga also and Canberra.

The Craigieburn Bypass joins the Hume Highway near Mt.Ridley Road in Craigieburn, with the ring road of Melbourne, the state capital of Victoria, and the second most populous city in Australia. 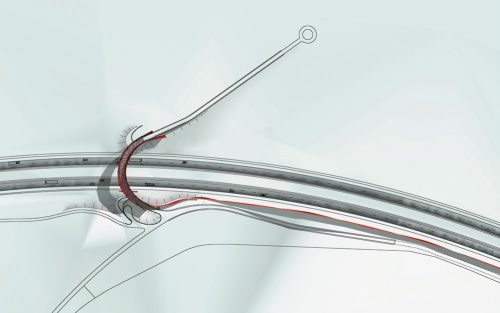 The Federal Government as part of its commitment to the realization of a new highway connecting northern Melbourne, held a contest to design a gateway element and noise abatement.

Taylor Cullity Lethlean, Tonkin Zulaikha Greer and Robert Owen won this competition in 2003. The winning design, which includes walls, bridges and landscapes, was based on a poetic reading of the location and environment of highway where speed is developed. In particular, the design explores how objects begin to display static or dynamic activated by the traveler.
The scheme proposed design concepts for noise attenuation walls and a stunning gateway element that would serve as a gateway to the city of Melbourne intended to provide an element of architectural features high quality for the section of the ring road.

The Craigieburn Bypass is a sophisticated project for a transit route that integrates art, landscape and infrastructure. The project is not a solution to solve problems, but rather a creative response to the concepts of movement, arrival and reference. The design was born of the need to re-route the Hume Highway and the obvious tension along the bypass route selected from the grasslands of the basalt plains in the west and the eastward expansion of the urban fringe.

The project was designed to be used on a highway where cars travel at a top speed of 110km/hr. 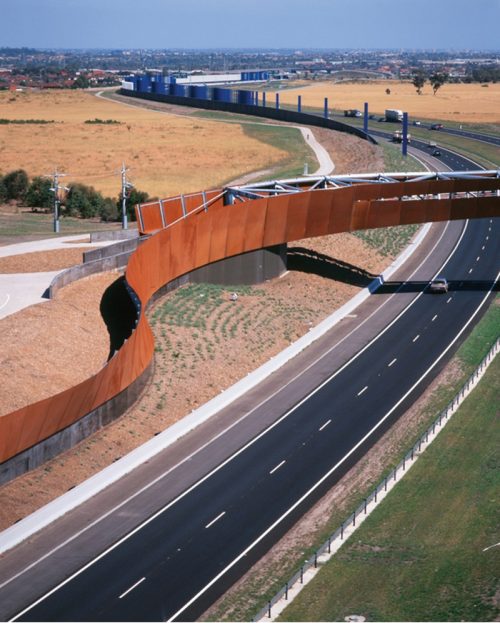 Includes three sets of sculptural walls that help soundproofing, a pedestrian bridge and a set of design parameters for road bridges, crash barriers and retaining structures, always advised by the artist Robert Owen in close collaboration with the architects.

The main series of walls designed by Tonkin Zulaikha Greer cover more than 2 miles long, and are made with facetted austenitic steel sheets, more wear resistant, modeled in simple concave and convex folds to produce a gently undulating wave of steel floating on a base recessed dark concrete.

The third series of retaining walls, also made ​​by Tonkin Zulaikha Greer, leverage the existing relief by placing a spectacular sculpture created by a row of painted blue monoliths along the ground. The use of gabions used as strong retaining walls and planting the land with gain control desired sound. 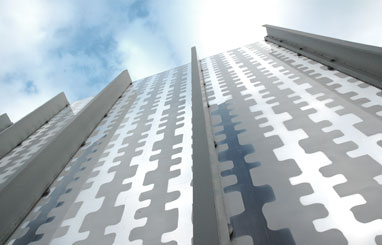 A second set of walls designed by Taylor Cullity Lethlean, are translucent and transparent, preserving light and views from residential areas. These are acrylic with illuminated edges. They have been treated with sand blasting on a digital model, and overlap with colored concrete prefabricated sheets.

An important element of the project was a new pedestrian bridge that rises 35m over the freeway, designed as a gateway to the distant city of Melbourne, on the horizon. The bridge, a complex curve in plan and elevation, is a lattice of steel tubes coated with the same austenitic steel as the main screen walls, which at this point seem to jump over the road in a gesture of welcome or farewell.

The pedestrian bridge is the climax of the curtain wall and the whole experience of ” gateway “. Carefully situated at the point where the driver first sees the city of Melbourne appear on the horizon, was developed as a curtain rises brilliantly framing the first view of the city. Similarly, when exiting frames a view of the vast prairies, the beginning of the great Australian landscape.

Developed two types of walls, each with its distinctive features, answering his adjacent condition.

Without resorting to the creation of a gateway as an object, designers have sequenced the elements in a sculptural form, almost theatrical to reveal views of the city. Sculptures, reliefs and elements of road infrastructure, including a winding and rugged steel curtain wall, cast concrete walls for noise, engraved acrylic panels, blue conical poles, LED lighting, and ultimately a pedestrian bridge twisted steel frames the Melbourne skyline, has been carefully prepared and integrated into the corridor to create a gateway experience of five kilometers, which is both dynamic and memorable sequential

In the three types of wall screens were used: 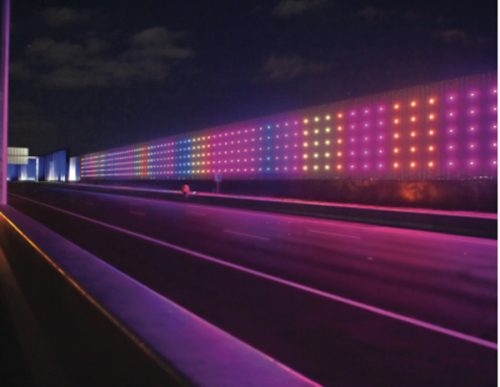 The LED fixture is weatherproof and is composed of red LEDs, green and blue, handled with a system that allows individual control of each LED. The control system was configured as if the wall was a video screen low resolution that would allow artists to use as a ” blank canvas “, programming sequences required to import images as map files or videos. Transducers were also placed to monitor traffic levels and activate the display of various lighting sequences.

The project highlights many technical achievements and the use of innovative construction methods. The close collaboration between engineers and architects shows the possibility of major infrastructure build successfully without major disruption to the environment.

In fact, in many areas, the construction of the highway has ensured the success and viability of many rare and endangered species in both flora and fauna. Based on an Environmental Protection Strategy developed project includes crosses under Highway, built to ensure passage of native animals and reduce the danger of having to cross the road, being one of the most characteristic examples fences preventing access kangaroos highway, saving from danger both motorists and animals.

The stormwater treatment ponds and creating wetlands, settling basins and ditches with grass were made to trap oil and dirt associated with a highway when in operation. This management process protects the environment in the process.

Initial construction involved extensive use of global positioning systems (GPS ) and laser guidance technology. These techniques were employed to improve accuracy and safety. The workers often did not need to be among heavy machinery, as each operator had access to booths equipped with computer screens showed a directional and precise mapping.

This information allowed them to proceed with clear understanding of the necessary requirements and result in significant time savings, increased accuracy and quality all in the works. In some sections of pavement is operated in a fully automatic mode, operators guided by radio link from a robotic station was tracking movements.