The Contemporary Jewish Museum was founded in 1984, setting a start in presenting exhibitions and education programs that explore contemporary perspectives on Jewish history, culture, art and ideas.
The relocation of the museum represents one of the last pieces of a plan to revitalize the Yerba Buena district San Francisco, which includes public squares and other museums in the area.

The museum was housed in a building of 1881 that functioned as power substation. A renewal of this structure, a new volume that completes the assembly added. The work was led by architect Daniel Libeskind.
The new building, with 5.853m2, has the mission to be a lively center for engaging audiences of all ages with Jewish culture and greatly increase the museum space for exhibitions and innovative programs in visual, performing, arts and media.

In 1881 the Gas and Electricity Company built on the street in central Jessie San Francisco, a substation, the largest of its kind, becoming an important tool for the development of the city until the early twentieth century point. However, a fire and then the devastating earthquake of 1906 destroyed the building. The substation of the Pacific Gas and Electric Company was rebuilt under the direction of architect Willis Polk who, using a neoclassical style, embellished brick facade south, including a cornice with sculptural elements. The station was in service until 1968, when its function was moved to a more suitable place for this function.

The project received numerous awards, including in 2008 Building of America Award by Real Estate Construction and Review and in 2009 Outstanding Project Award from the American Society of Civil Engineers (ASCE).

The museum is located at 736 Mission St, in San Francisco, in the center of the Yerba Buena cultural district, United States.
Yerba Buena was the original name of the Mexican settlement that later become San Francisco, California. Located near the northeast end of the San Francisco Peninsula between San Francisco Presidio and Mission San Francisco de Asís, it was originally intended as a commercial center for vessels that arrived at the bay. The settlement developed in the Spanish style, around a plaza that remains today Portsmouth Square. 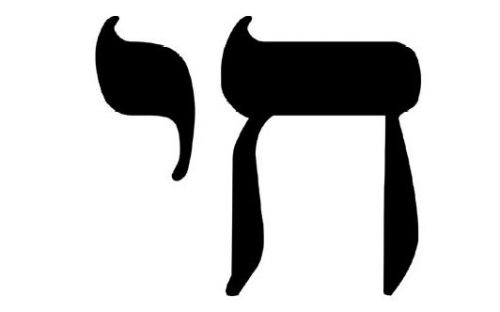 The Studio Libeskind building design based on the Hebrew phrase “l’chaim” meaning “to life”, composed of the two letters “chet” and “yud”, relating to its connection with the role played substation the recovery of the city after the earthquake of 1906 and the museum’s mission to raise awareness of the general public Jewish culture.

In the Hebrew tradition, the letters are not merely signs, but an integral part of the project, substantial participants in history that created the “chet” offers a comprehensive continuity of spaces for exhibition and educational, and the “yud” part with its 36 windows, serves as a special space for the exhibition, performance and events.
This is the symbol of the relationship Libeskind would establish between the old and new architecture, and is the emblem also the development of Yerba Buena.
The existing structure of the nineteenth century, was restored and remodeled. The Libeskind project maintains the atmosphere and the distinctive features of the historic station, such as coated south facade of brick and terra cotta decorations. On the other hand, the attached surface is characterized by a “skin” blue steel panels that line structure.

Adding forms are coated with bright blue steel panels, terminating in a single cross-hatching surface which helps to spread and smooth the light reflection stainless steel. The panels change color depending on the time of day, time, and position of the viewer, creating a dynamic, living surface.

Admission to the public is through the historic power station. The huge lobby serves as income and as an exhibition space for special programs.
The large lobby of 232.26m2 is a dynamic input is transformed into a forum for special programs, the dramatic contrast between old and new is evident. Spanning the entire length a wall on which were placed the letters ” PaRDeS “referring to the Kabbalistic practice of discovering four different levels of meaning within religious writings in Rabbinic Judaism or the interpretation of the text it is located Torah study. The philosophy of the museum, and its architecture, embrace the idea of ​​multiple interpretations and meanings in life and in art. 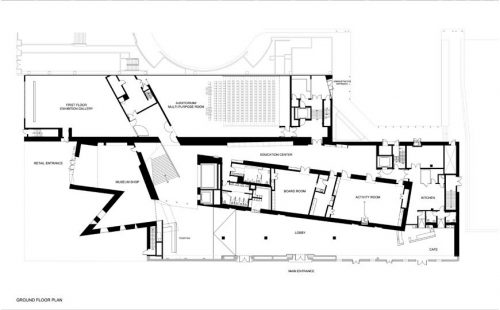 On the ground floor, where you can enjoy the views of the skylights, are the exhibition gallery, auditorium, conference room, a training center, a café, museum shop and restaurant. 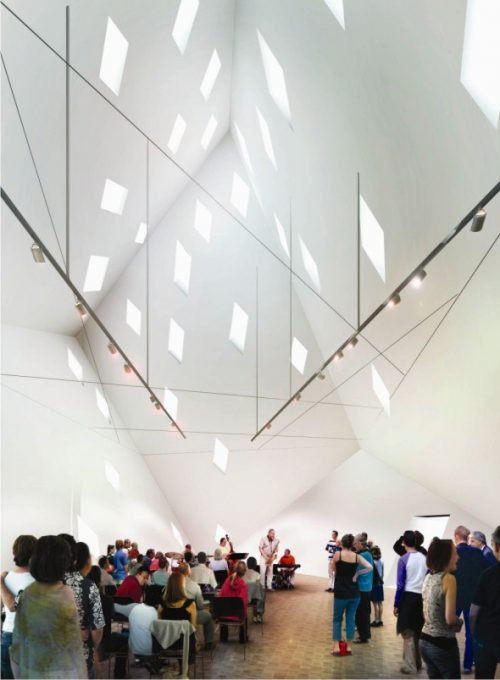 The gallery floor is designed as a large industrial space, with cement floors and no ceilings, with exposed structure. This space gives the audience a visual through a large window on the outer wall that functions as connector in the public space. In turn, this window offers a direct relationship with passersby inside the museum, as part of the daily life of the city.

The museum includes an education center for visitors to participate in dialogues on culture, history, art and ideas. It is located on the ground floor, in the heart of the museum, reflecting the central role of education in Jewish culture.

The first floor houses a large exhibition gallery space for special events and administrative offices. In the basement are the storage and areas reserved for electrical and mechanical installations.
The multipurpose room was designed to allow great flexibility, unstructured space. It is suitable to function as cinema, video, theater, lectures, readings, etc. It has a retractable seating system that allows arrange them in different ways.

On the second floor, the exhibition galleries offer space for larger objects as well as more intimate places for small objects or paintings. It is on the second floor where the intersection of the original structure forms new design is revealed.

The design of the new building includes a complex angular steel structure protruding from the historic brick facade.
The bucket inclined plates coated with dark blue steel slides into the old brick substation, making visible the relationship between the new and the old. The design of Libeskind preserves the defining characteristics of the old building of Polk, including its brick facade, trusses and skylights. The 36 diamond-shaped windows illuminate the top floor of the nave, known as the “Yud”. Another section of the museum, a tilted rectangle known as the “Chet” argues the lobby, an education center and part of the upstairs gallery.

The building is located in an area of ​​high seismic activity. Resistance to seismic loads is provided by steel braced frames. Although the structure is essentially of two levels, the highest point of this angular building rises almost to 21.34 meters above ground level. The complex geometry of the building blurs the lines between beams and columns, and items that resist gravity loads and lateral loads that are resisting. Many columns are not vertical, some are inclined in two directions, and braced frames carry not only seismic loads, but also gravity loads.
Structural engineers built a 3D computer model of the building in order to perform dynamic spectrum analysis with detailed answers. Because braced frames also carry gravity loads, seismic design was required to ensure a quasi-elastic behavior of a possible maximum credible earthquake power. 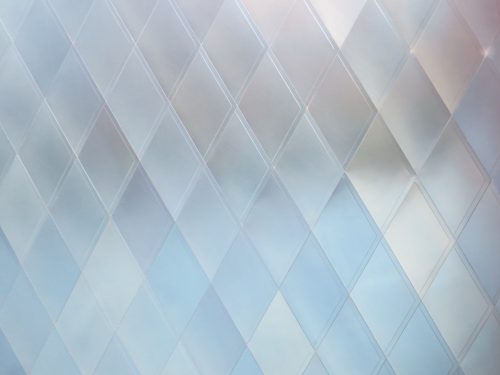 The structure of the annex is covered with 3,028 steel panels in iridescent blue. The color is not achieved through dyes or pigments but by treatment with optical components that determine different nuances depending on time of day and time. This means a solution to the facade, which is always related to natural deterioration.

In the project Seam® Inverted Roof and Facade System, one of the most powerful coverage for seepage control, surface smoothness and long-term performance, both on the roof and the facade is used.

Integrated ceiling appear 36 skylights, each specially made for the place and settled perfectly flush with the metal surface.