Calatrava Bridge, later named the Constitution Bridge (Ponte della Costituzione in Italian), commemorating the 60th anniversary of the Italian Constitution, is the first to be built after 125 years in the city of Venice, is the fourth bridge over the Grand Canal, near the Rialto, Accademia and Scalzi.

Few modern interventions made in Venice. For a work that must be built through the adoption of a number of institutions looking to maintain the image that for centuries has characterized the city. “Scarpa, Rossi, Nervi, Gregotti”, “Valley”, “Siza” and “Botta” are a few modern architects who have designed and built on the island.

Different fate has befallen prominent architects as Le Corbusier “,” Kahn “and” Wright “, who have planned their work in Venice but have not been made. This arrest in the past, and the water quality of the city, is part of what attracts thousands of tourists who visit Venice every day.

In 1995 is to build a new bridge across the Grand Canal. The Spanish architect, Santiago Calatrava, is responsible for the project to link the railway station “Sta Lucia “with” Piazzale Roma “, a point of arrival of buses and cars, which connect the island with the mainland.

Work began on November 18 2002 and should have been ended February 16, 2004, with an original budget of 6.7 billion euros eventually rose to become 10.7 million. The budget increase has been due in part to the need of having to improvise at the last moment a mechanism for wheelchair access to the bridge. The work was finally completed in September 2008 under great controversy.

The construction of the Spanish architect Santiago Calatrava will connect the Santa Lucia train station with the Piazzale Roma parking, thus uniting the only area of the city accessible by car and tie to the mainland of the lagoon city, Venice, in the region of Veneto, Italy. 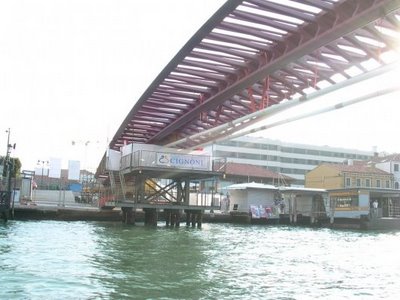 Venetians do not call it the bridge of the Constitution, known as the Calatrava Bridge, or the dinosaur, because the structure reminded the spine of a giant of the Jurassic.
When asked why their works seem inspired by the anatomy and Calatraba replied: “Miguel Angel said that architecture depends on the members of man. That’s why someone who does not understand anatomy unlikely to be a good architect. ”

And although many do not believe him for Calatrava Venetian tradition is important and is present in the project.
Calatrava for the relationship between modern and classic is important, because every time an artistic development of the above, “as the Baroque to the Renaissance.” Calatrava noted that this balance between classic and modern is reflected in the presence of materials such as stone and bronze, in memory of the past, and laminated glass, which lets you see the transparency of the side walls or the glass step that allows the light down, in allusion to the modern.

The bridge, a steel structure light and flexible that you can remember from some angles the open wing of a bird, measuring 94 meters long and a width that varies between 9.38 and 3.00 meters, that this peculiarity each side measuring 3 m and as progress is being expanded to reach 9.38 meters in the middle of the bridge is due to the intention of those who visit, you can stop to contemplate the landscape without impeding those who want to cross without stopping.

Have a success of 81 meters and 10 meters high at the center point.

The steel frame is painted in a red tone Venice, the floor is made of glass and stone of Istria and handrails with glass railing of bronze.

General engineer of the work, Roberto Casarin, explains that the skeleton of steel makes it a living work, expands and shrinks with the temperature change. Is an arc discharge 1,700 tons in each bank. The project provides for a tolerance of four inches of the ground.

The new bridge has been built on a mud floor, studied in detail by experts in geotechnics. Before mounting the bridge, the ground was strengthened. “If the foundations are turning away more than four inches could collapse. But the likelihood of this happening is one in 87,000 million. The tests with the maximum weight load on the ground have shown that the bridge has been moved 13 millimeters”.

Construction of the bridge 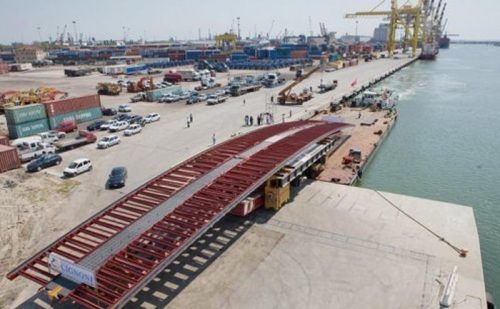 The metal structure was made in a stone

It is quite interesting how it is done building the bridge. Is performed separately. On the one hand, land, build the foundations that are more than 20 meters deep. Moreover, the metal structure is a stone in San Dona ‘di Piave in the Veneto. Once will be transported by sea. Enter the “Grand Canal, passing under the Bridge of the Academy” to be finally placed in its final place.

Due to the great height of the structure, this does not pass under the bridge without bumping appointed. That’s why we have planned for the night browsing the lowest tide of the year, an event highly anticipated by the Venetians.

The work is mainly in steel and glass.