The reclaimed areas in the cities of northern Europe tend to boost a new type of architecture very particular. A large lax restrictions, the belief that a spectacular design will stimulate urban development, the cheaper among other factors, in addition to some fanfare, are characteristics that make these areas specially designed to be rescued from the post-industrial decay.

These areas, whose remnants often remain dormant, arouse the interest of the architects of their experimental and risky customers.

Colorium, a speculative office development on the docks along the Rhine in Dusseldorf, played their role in the rejuvenation of this dilapidated area of the city, which led to its transformation into a so-calledMediahafen, concentrating a new generation of entrepreneurs Electronics Industry in the German city of communication.

Colorium is a box decorated to give accurate answers to the questions raised in the report. The smart way it has handled the technology to produce a result only one with a tight budget will have consequences that exceed the scope of manufacturing techniques and to continue fertilizing will cut across the entire industry. The complexity generated by a computer can replace economically to standardization, not only in superficial, but through the process of building and its conceptual background.

The proeyecto is located in an area exindustrial in the town of Dusseldorf, Germany, which has been remodeled in recent years to relaunch it as a zone of technological innovation.

In such a context, the tower designed by Alsop has become a symbol of the new, not only by their color but by what their special way. The parallelepiped is exceeded, in fact, by a red, with its horizontal development, advancing and exudes the perimeter of the tower.
Its red and the light it is at night makes the building looks like a giant lamp. Shapes and colors define an image of simple, but immediate levying capable of attracting the attention of passersby, but also of today who visit the old port just to admire the new icon of contemporary architecture.

The absence of a dominant color, from yellow, red, green, white and gray, confers on the surfaces of the tower a dynamic and playful, it becomes even more vivid for its many windows. Laterally, long strips interrupt the white and black colored collage, but at the same time come to be part of it. The contrast with the surrounding landscape is harsh and intentionally provocative, color, locked in regular and geometric forms, becomes a vehicle for a new idea in city: less usual and closer to the desire of citizens to get excited or surprised, admiring a building that is simply a headquarters office. At the base lies the idea of Alsop that the city is not only a physical place, but above all it is an integral part of the imagination of those who live in it, absorbing the emotions that is capable of transmitting.

The sophistication and architectural technique focuses on the appearance of the coating. The orthodox system of curtain-wall creates a unique effect through an intensive concentration of its decorative potential. The glass panels, windows and eardrums have been mounted in prefabricated aluminum frames. The 17 types of panels have been colored with 30 colors on a stamp designed to break the scale and shape of the basic profile of the block.

The architect is an artist in every ruler and subtle, like the vorticity England opted to camouflage ships at sea and the sky with dazzling painting during the First World War, he uses patterns that blur the readability of the heights of the building, increasing the scale of the relatively small structure heights of 18.

The colors are limited to the windows, and the array of paintings, silk screens has reduced the opacity, providing depth perception, reinforced by the glare created by the surfaces. The ambiguity is kept stressing the central structure with a membership made up of panels.

The building is topped by a box with red lights that hide the plant and the steel frames, both components in overhang on the front oriented to the pier. This box full engagement of local and long-term by building likened to their environment, reflecting the water and, at night, resulting in visible from the city.

The greatest achievement is the pragmatic use of technology. The processing of knowledge of the industry, and its ability to generate and implement a complex surface have been combined with the experience of modern building facades. Since World War II, the headquarters of manufacture “Mittlestand” German-Swiss has perfected the curtain-wall systems. Aluminum, which holds a high position in the table of the elements, is easily reactive and therefore resistant to corrosion. Extruded through dies, it is possible to form at low cost with this material sections with complex profiles to fit perfectly with the frames, also offering the highest suitability for transportation and assembly. Profiles can incorporate sealed, turning immediately to the joints in water-resistant, while tolerating the movement generated in the underlying structure.

In this example, the panels are placed with an average of 1 floor and a half a day, to achieve an appropriate adjustment to the weather conditions that allow the best conditions for these jobs, essential to save the cost of construction.

The horizontal assemblies have been installed under the windowsill of the windows, away from the corbels at ground level, increasing the complexity. The building is ventilated by natural means and each pane windows that form allows the opening of a window pendidas guillotine with the upper which simplify the joining of the mullioned windows and sealed.

The filled double-glazing, with low-emissivity coatings, are decorated using a primer screen. This machining process, which uses a viscous ink reinforced with nylon, is played by building a template for drawing, being turned into posters of “high art” in the hands of the masters of the Dutch De Stijl trend. The resulting tones, with a quality color very much alive, and fitted with a high definition, now find a new application in the appropriation of the aesthetic reasons of the group of artists mentioned, and their bright-colored drawings.

Reflecting the aesthetics of the new “ports of media,” the blocks of color makes a clear reference to esthetic data files, as the credits of films from the 1960s, reflecting the computerized processing.
The design is very similar to the letter of adjustment of the BBC, the first electronically-generated image that was an icon in transition, as reflected in the composition of the famous George Hersee 1967 titled “F card” which consisted of a collage made by hand.

The treatment of the facade of the building evokes the aesthetics of the media: how the photographs are framed and the way they are corrected prospects, similar to those that adorn the covers of books and magazines.

This is a building level, dressed in a coating that can be as ephemeral as the cyclical fashion. Includes a dry chemical treatment that the colors sets, but it is predicted that some will be blurred by the effect of time, bringing the erosion of its palette will be very interesting.

The design of the plane and the structure is conventional. A shell of concrete with a circular perimeter columns of braces is a core provision along the south side. The Standard and flexible partitioning divided the soils in a wide range of available spaces.

To lift the building was used elements such as aluminum, concrete, glass and steel. This construction is often framed within the tendency of art known as modernism. 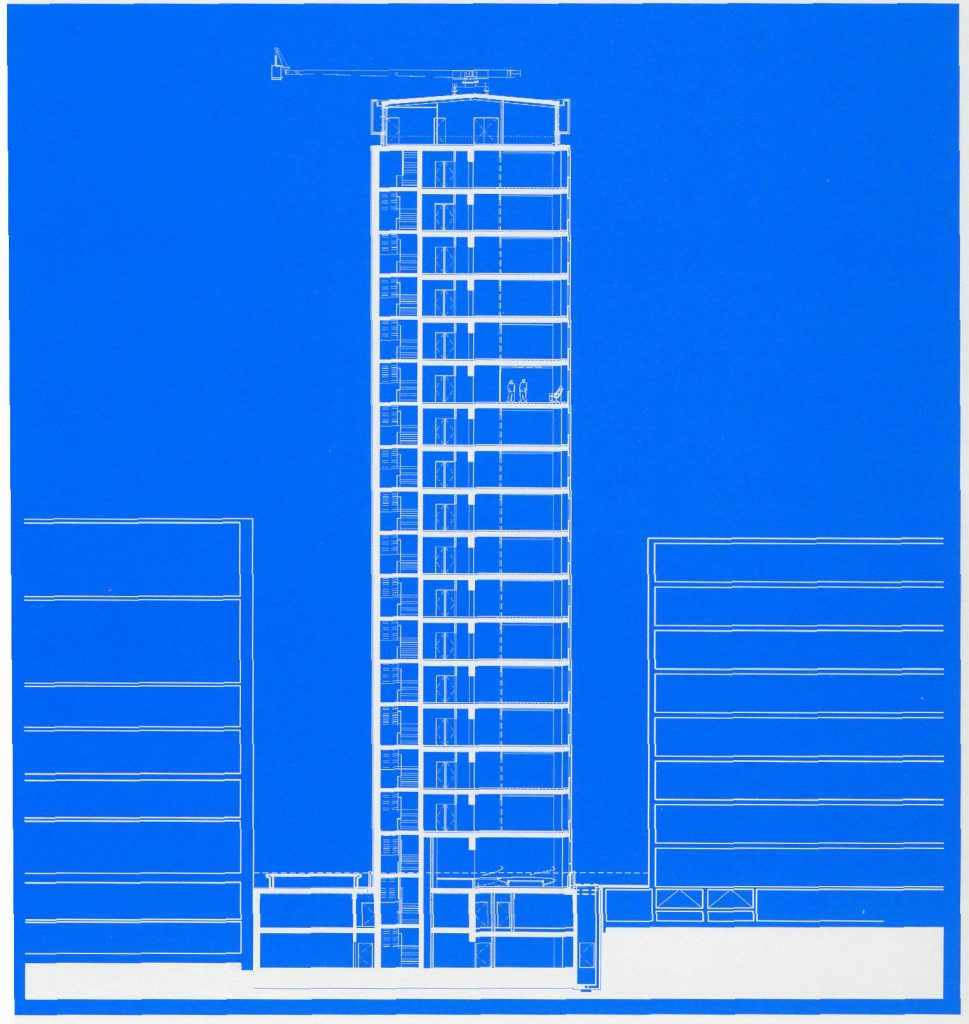 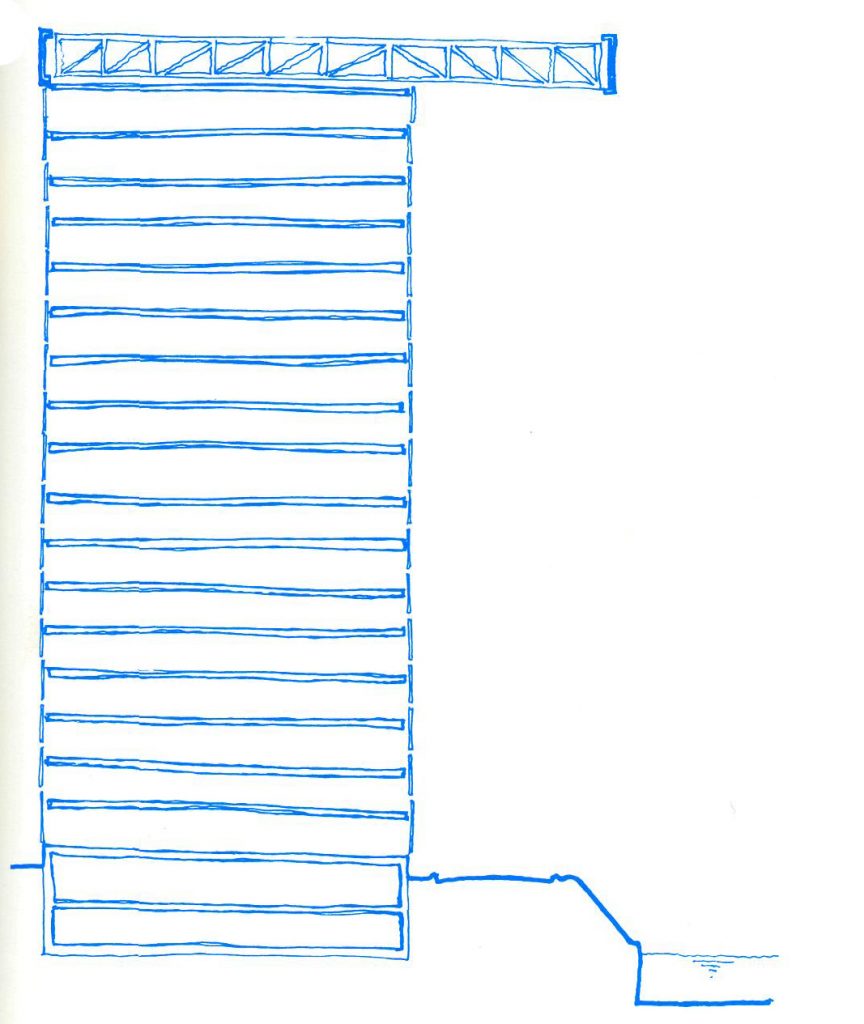 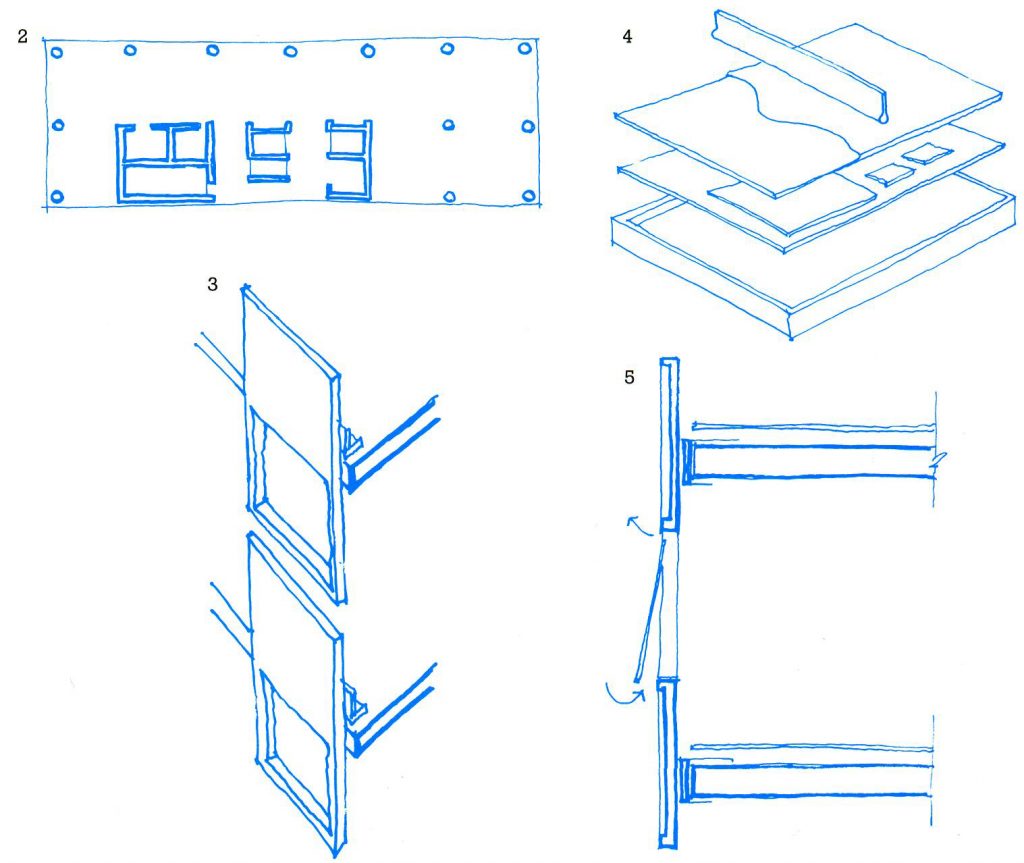 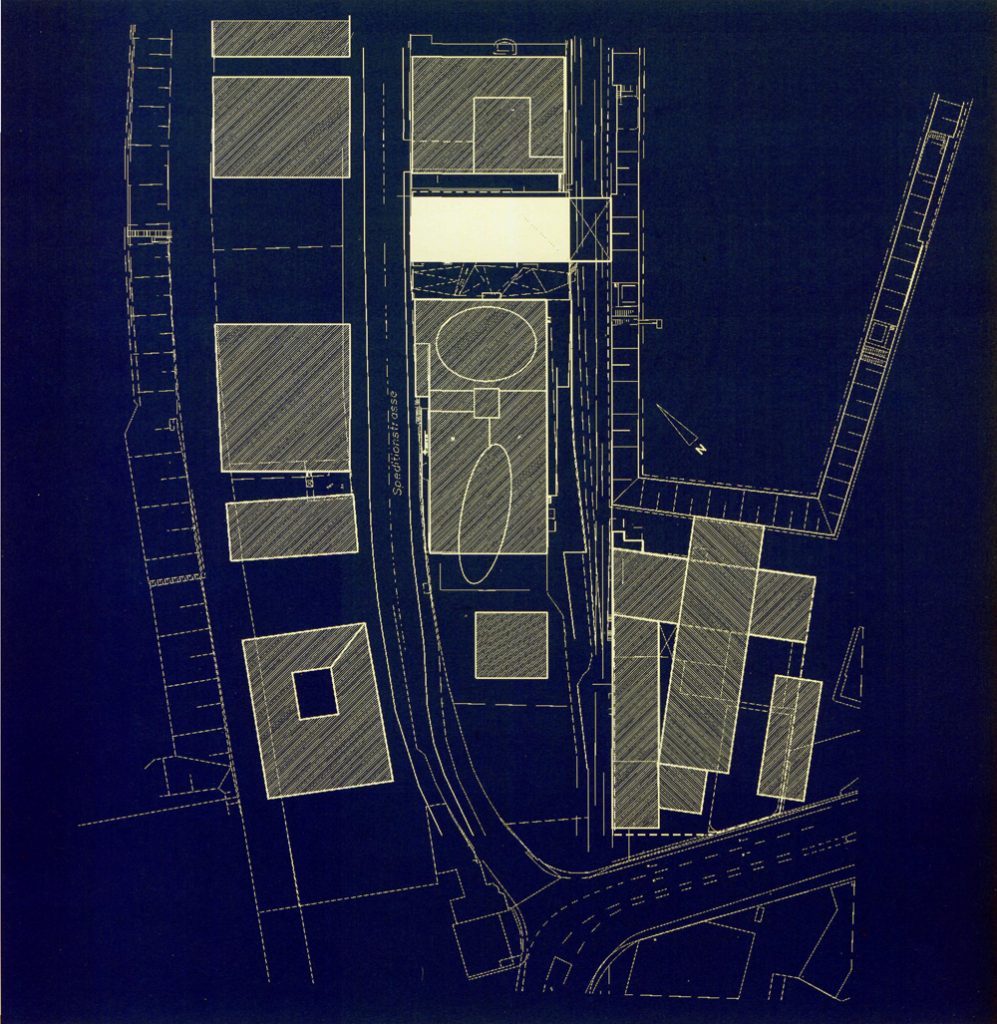 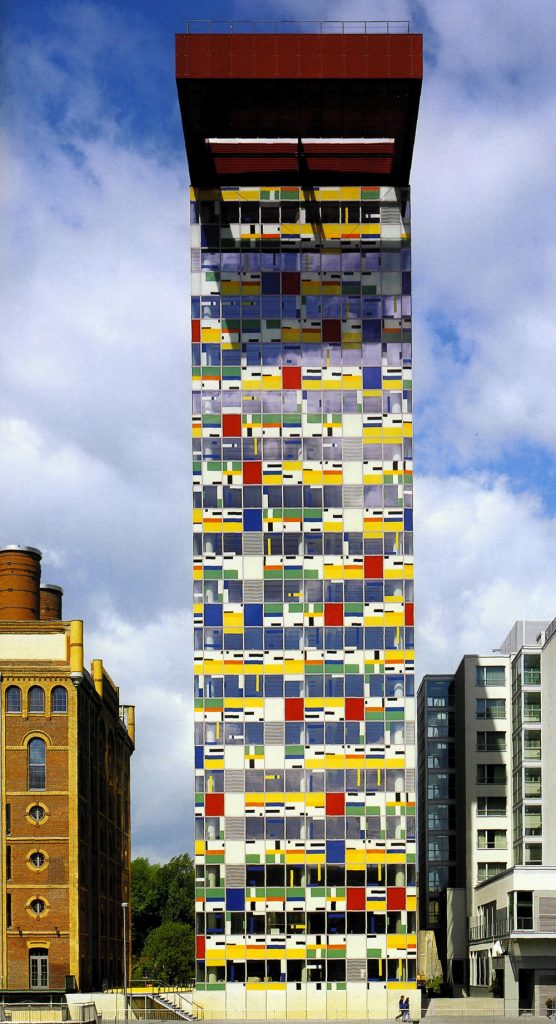 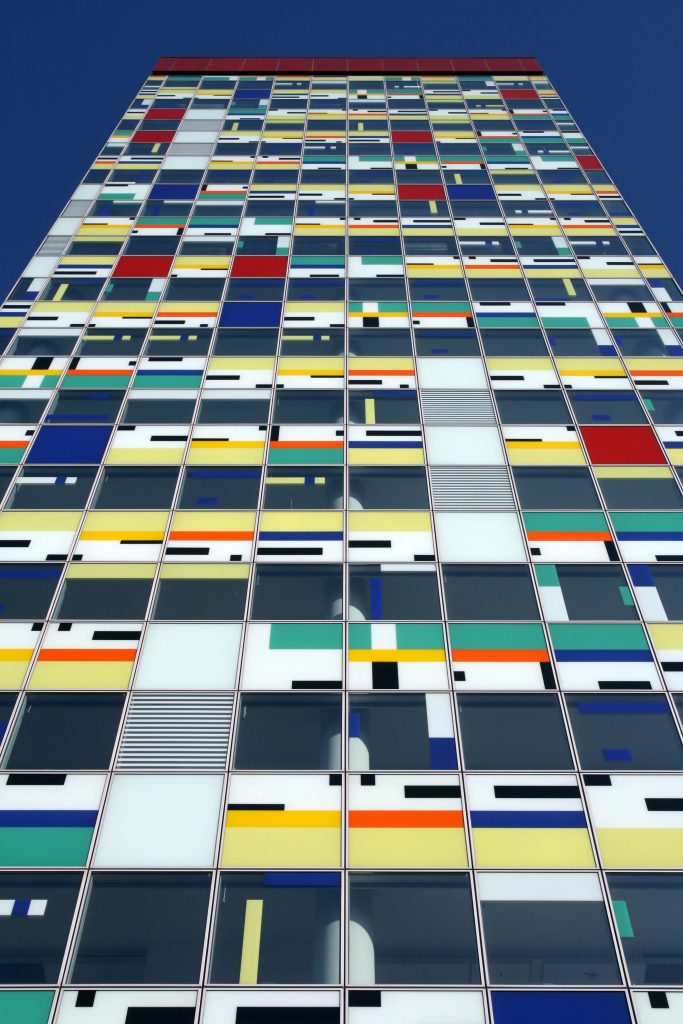 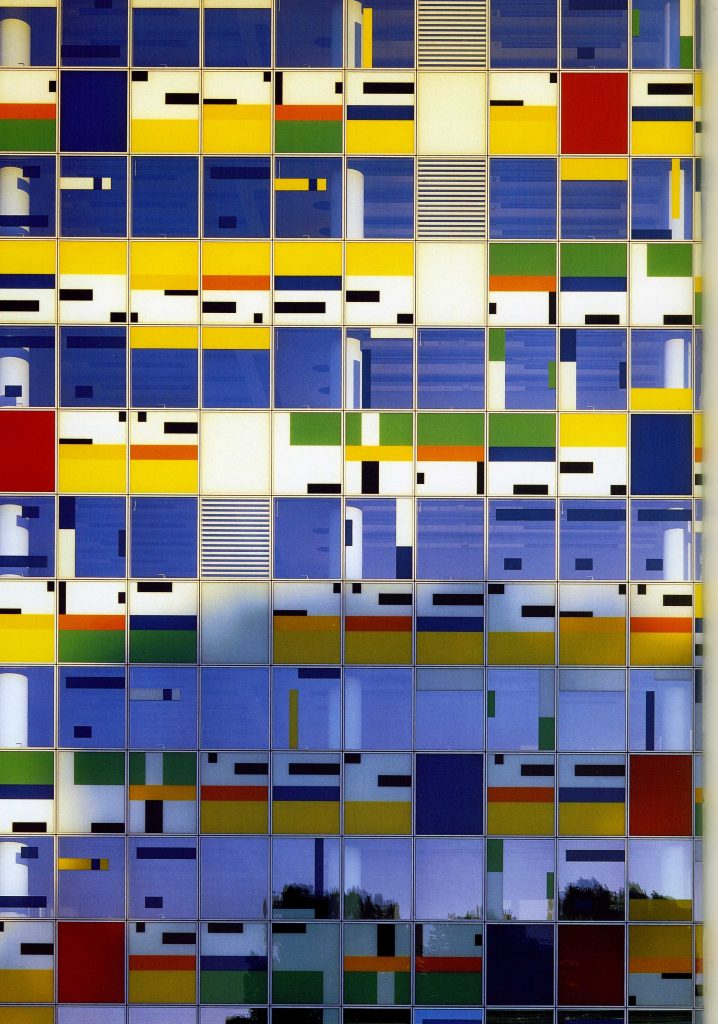 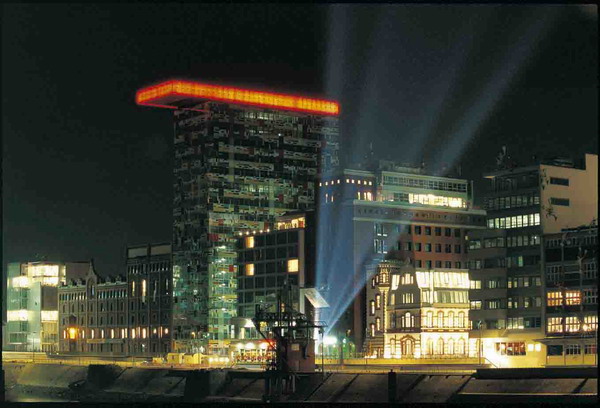