The commissioning of this project came the architect Hector Guimard Coilliot hands of Louis, an entrepreneur potter love with glazed ceramic. Coilliot wanted to popularize this material, so he relied on an architect who had met at the show La Céramique et tous les arts du feu about the art of ceramics and glass. The use of ceramics as a prerequisite became the custom, as it was to function as a decoration on the facade and as a publicity stunt factory Mr. Coillot, which was located just behind the house.

The property Coilliot family consisted at the time of the construction of this house, a set of buildings. After the house was Coilliot an area of ​​744 square meters in which two buildings stood: Coilliot the company store, designed by François Hennebique, and an apartment that rented to tenants to have additional income. The land in question was irregular, narrow lot, so each building had its own address. The apartment building was located at number 13-17 Rue Fabricy. In 2008 the property was separated and sold for parts to different buyers. The Coilliot house became part of the artistic heritage of France on March 16, 1977, while the other two buildings were considered worthy of preservation, so that some of its elements, such as household ceramic, were recorded in October 2011 by the DRAC.

Since Coilliot house is privately owned access to visitors it is not allowed. It opened to the public only once, on 17 September 2000. However, the interior decoration and furniture can be seen in a 1983 recording by the French National Audiovisual Institute.

The Art Nouveau house is located at 14 Rue de Fleurs in Lille, France, very close to the parish of St. Michel, in the historic city center.

Hector Guimard (1867-1942), one of the greatest exponents of French modernism, studied at the School of Decorative Arts for three years before enrolling in the School of Fine Arts in Paris. Beginning with works of historicist air, the young architect was entering the curve in their designs. In Paris, Guimard knew the work of Viollet-le-Duc. Later he traveled through England, Scotland, Holland and Belgium. The turning point in his career was during a trip to Belgium where he met the Hôtel Tassel of the architect Victor Horta.

Hector Guimard it made ​​this project a complete work, both architecture and designing furniture and interiors. The work could be defined as a mixture of housing and banner on the facade as the name of the company owner, Mr. Coilliot, and products it carried out in the factory located at the rear of the property are shown by while working as a home for the owners.

The building consists of four floors. The ground floor houses a shop, while the remaining three floors are apartments. The house has two facades, one flush with the surrounding buildings, and a somewhat withdrawn, angled. These are characterized by the absence of straight lines. Both are joined by the balconies of the top two floors. The main facade facing the street is made of green glazed stone (wash émaillée, specialty factory Mr. Coilliot) while the front wall is topped by a wooden deck.

Despite its asymmetry, the facade gets a sense of harmony through its many curves and picturesque forms. On the ground floor the entrance to the store, a wide gate, and housing, a door with a window on top teardrop or droplet is placed.

On the facade you can also see written the name of the house, a claim for Mr. Coilliot company. The typeface is very similar to that Hector Guimard used at that time, between 1900 and 1904, in the subway entrance he designed in Paris.

The first and second floors are compositionally united under arched recess of the main facade. A stone facade, add here wooden elements that form pillars and balcony on the second floor. The interior of the rooms of these two plants biased look at the street, so differing from the neighboring buildings and more traditional composition.

The third floor is placed under the wooden deck. Her stand two windows at a second roof and a low window just below the pediment of the main façade.

The lobby of the house also shows the taste of Hector Guimard by the forms of nature. The roof is composed of a series of bands decorated with floral motifs. Also, the walls and the glass that divides the hall with staircase curves show the house, especially natural floral shapes and designs. On the stairs of the house clearly shows the influence that the Hotel Tassel took Hector Guimard during the trip to Belgium. Once inside of the rooms you can still appreciate the art deco architect in doors and furniture. Special mention deserves the stone hearth and accompanying furniture. They are also ornamental details on the ceilings of the rooms.

The house is built of brick and carved stone. The decorative elements are wrought iron, stone and glazed ceramic. 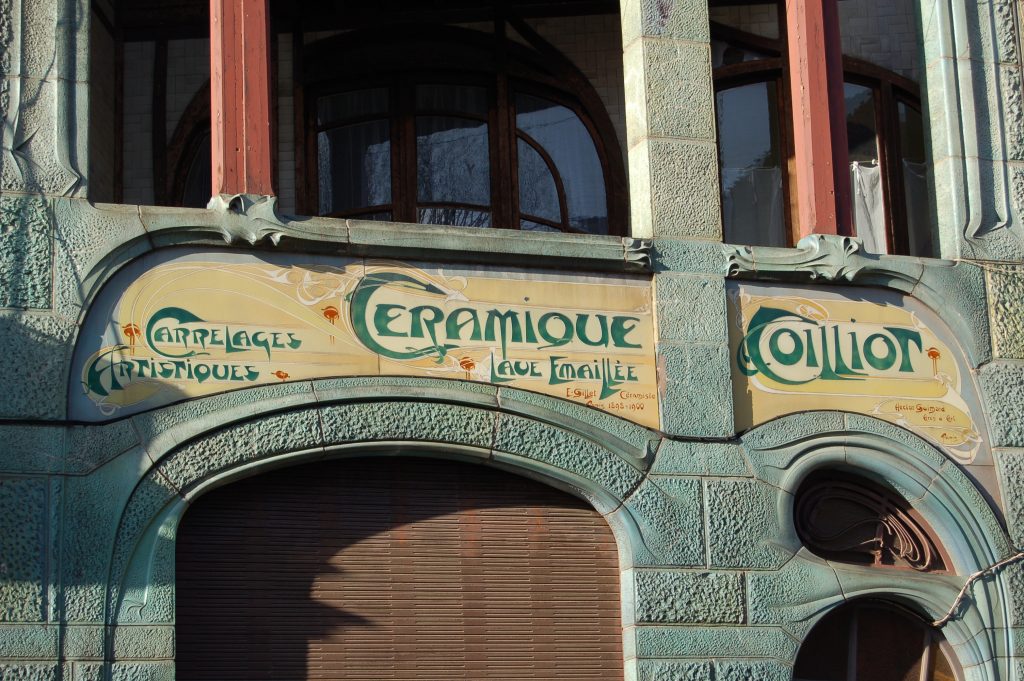 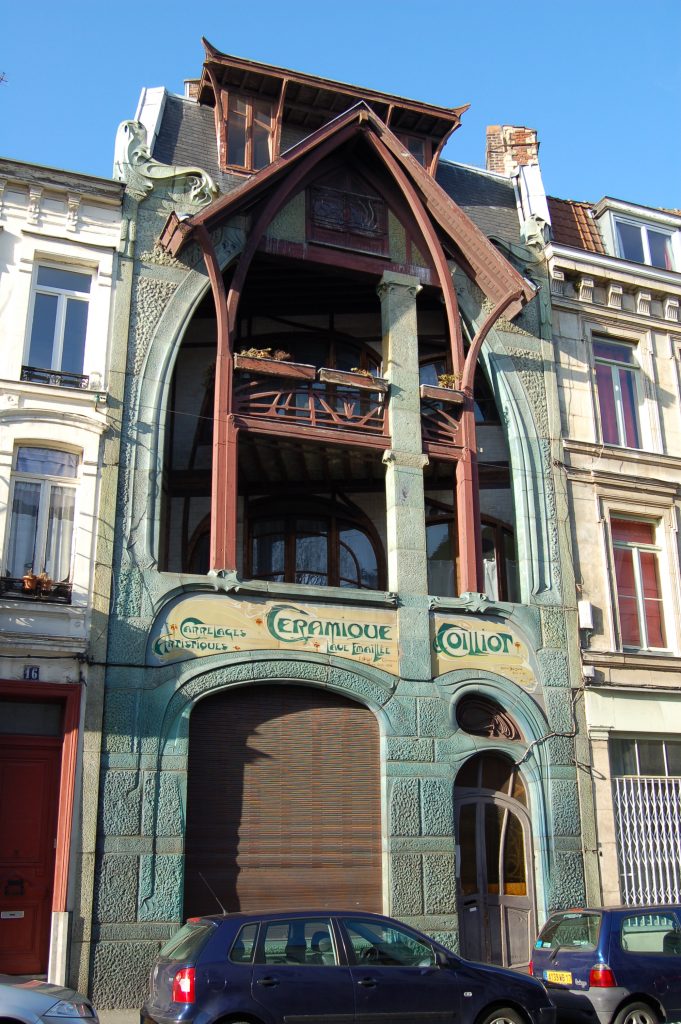 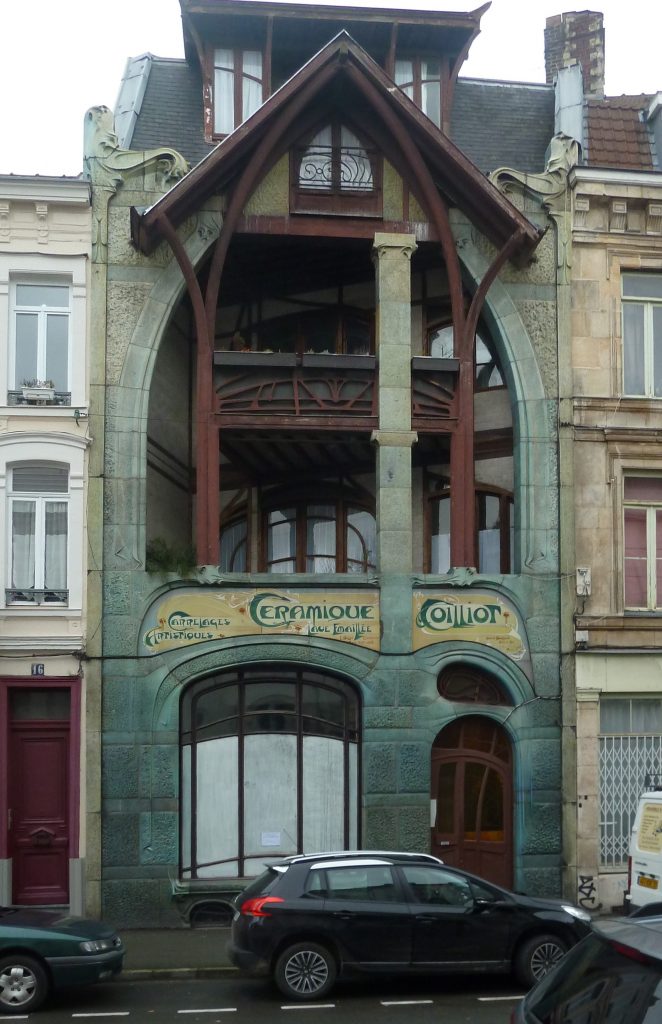 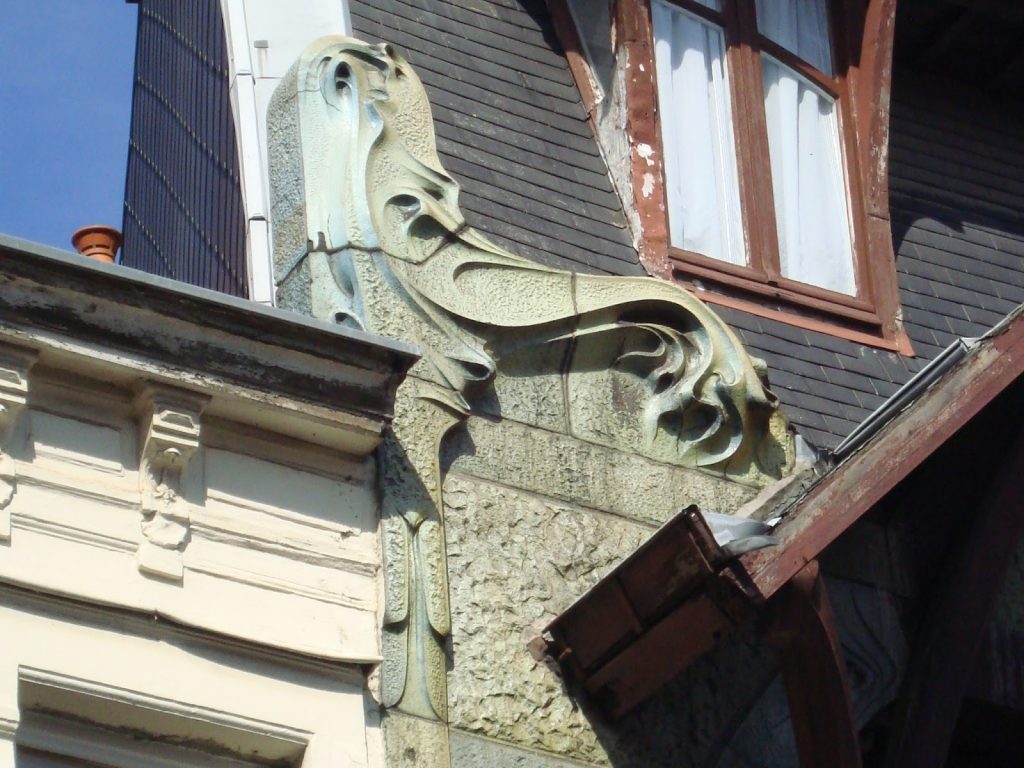 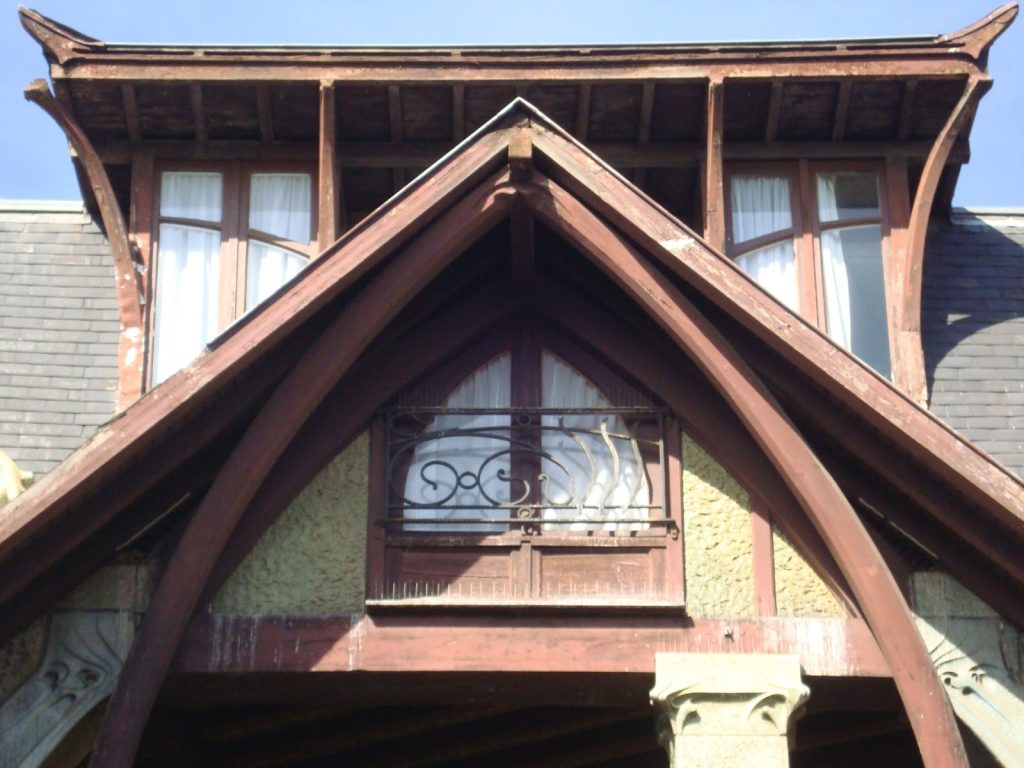 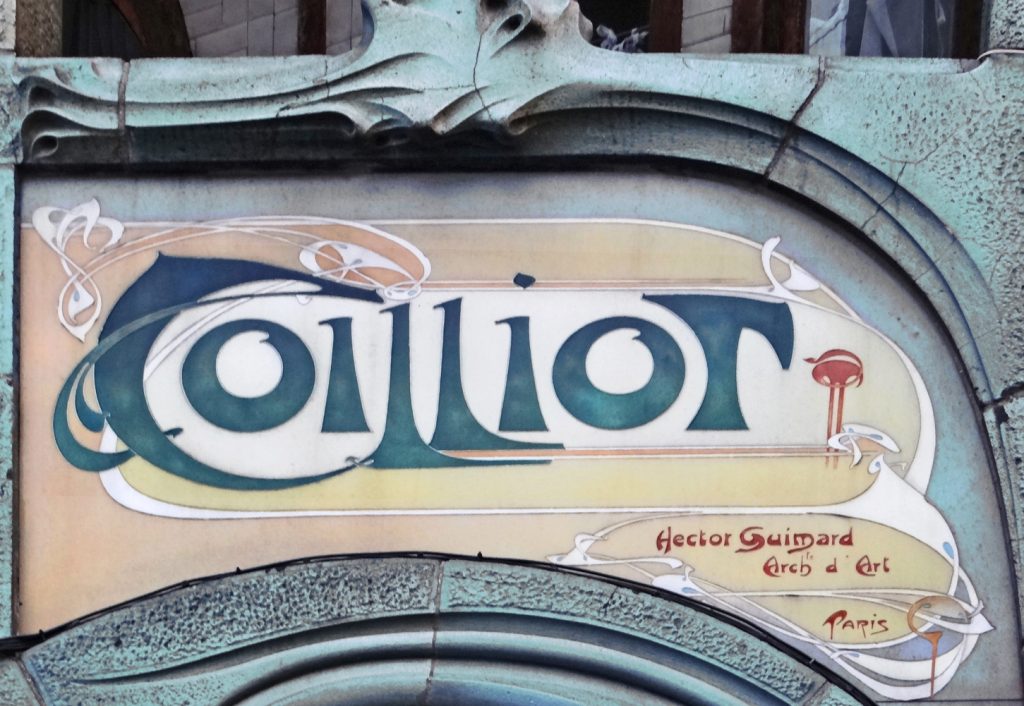 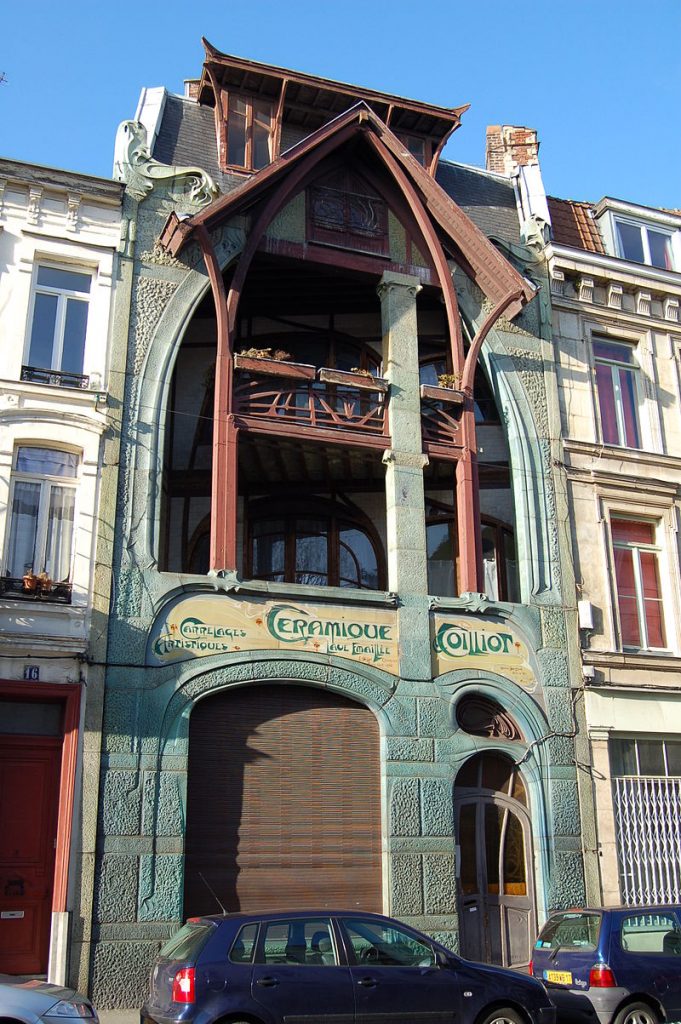 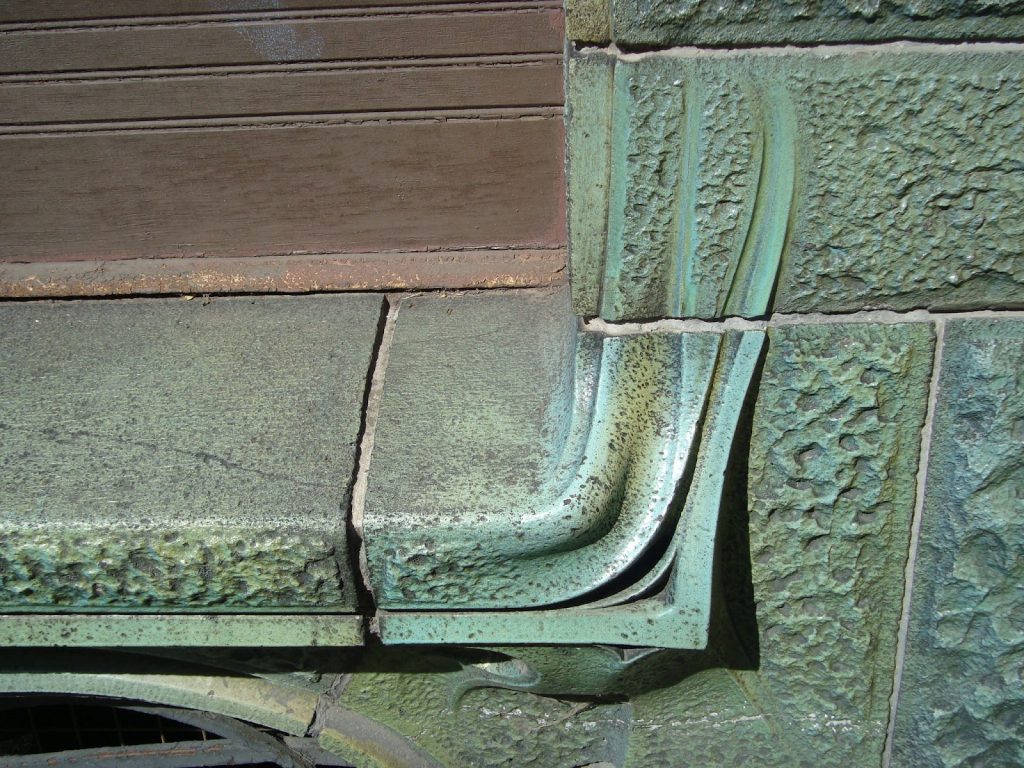 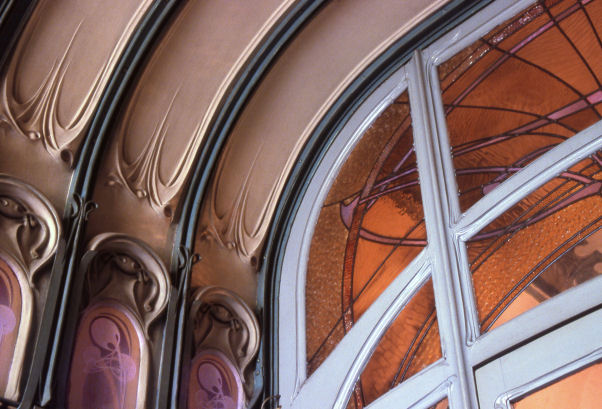 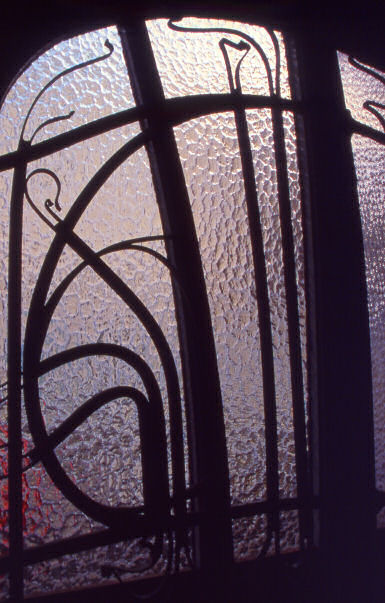 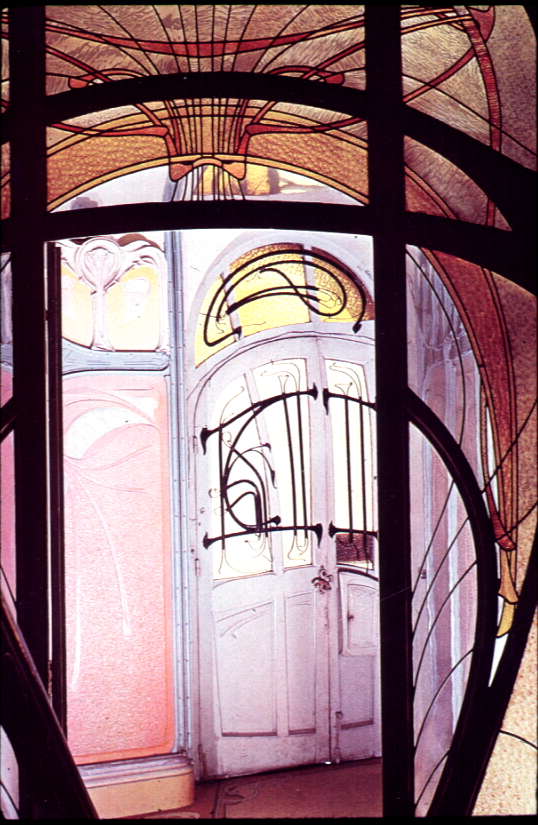 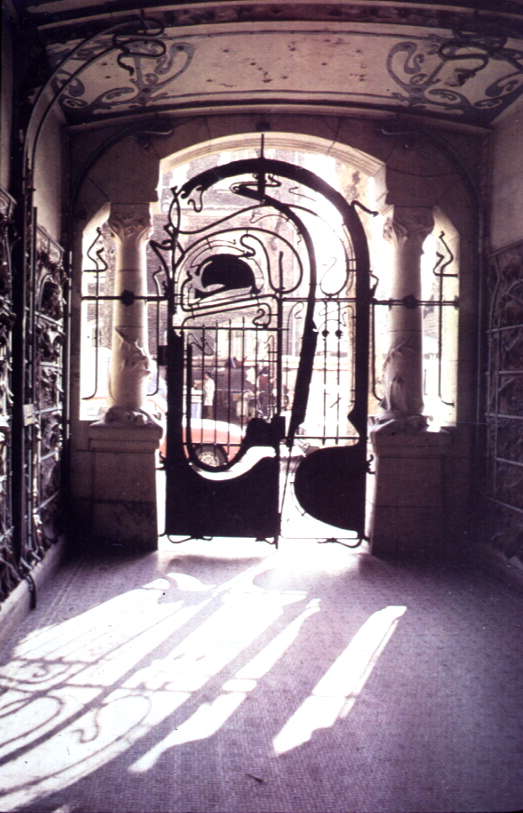