When in 1970 the insurance company CNA decided he needed a new building to house his growing company, obtained a Miesian design made by Graham, Anderson, Probst and White architects, but the company wanted to differentiate itself from other “rectangular boxes” that filled the city skyline. Moving away from the traditional buildings in the vicinity, the firm decided to paint the new headquarters of red, creating a building that has stood in the whole city skyline since.

The CNA Center building, also known as CNA formally Square bears the name of Continental Center III. With its 44 floors is not a massive structure by the standards of Chicago but its location on Wabash Avenue and red make it stand out like a fire alarm in the city skyline. Despite its striking color is not a building to call much attention to pedestrians who daily walk this part of the city. But in 1999 his name came to the fore because of a piece of glass fell from a 29th floor window and killed a woman on the other side of Wabash Avenue. Subsequent investigations showed that the glass had been cracked for months and a history building broken accumulated over the past 20 years windows. The original glass used in the building could not stand the level of thermal expansion experienced. At that time more than 20 windows were broken. The property owner paid a huge fine to the city, received a wrongful death claim and replaced the 3,000 windows of the facades.

The CNA Plaza is located at 333 South Wabash Avenue, Chicago, Illinois, one block from Michigan Avenue and extensive green space in Grant Park.

This is a box with a heavy Miesian structure in which the windows are embedded. The thick frames offer greater surface red paint, helping build stand out more.

The CNA Center consists of two buildings which are joined on the second floor, Conference Center CNA uses a space on that floor, but all entry and exit to it is through the CNA Plaza. Originally known as Continental Center III, an annex to the lower building, 101 meters, Continental Plaza II, to the north, which was also painted red to match, then the lowest was restored to its original gray. The Continental Plaza Building II, in turn, was built as an annex to the original company headquarters, Strauss Building 1924, the tower with a “Mausoleum” as a stop and the first building with 30 floors of Chicago.

The new building normal office building would be considered if it were not for its color makes it stand out from its neighbors. The color of your design relates to the sunset over the ocean, which would give the inhabitants of Lake Michigan this illusion if you look west at dusk.

From the date of its completion in 1973, the 183 meter high CNA Square have had a predominant role in the skyline of Chicago, not by the quality of its architecture as for its fiery red. It is a “Miesian box” with a structure of heavy beams, and recessed windows whose thick frames offer greater surface gloss paint. Not only the exterior walls hold the striking color, is also found in some interior details such as columns or stairs to the lobby.

After the crash of 1999, the building owners decided to change the crystals of all windows for heat-resistant glass to avoid breakage by thermal stress. This process could take up to five years, so the experts decided to implement a safety film used in new generation prone to earthquakes or hurricanes places, but it also serves as protection in case of bomb, explosion or impact.
This’ anchored sheet “comprises a robust sheet with micro polyester layers that adheres to glass and sealing the edges is reinforced with high performance structural adhesive silicone based. If the glass breaks, it remains attached to the sheet and this to the frame.

The CNA building is known for using his media facades, to promote social causes either sports or promoting various campaigns.

The environmental and aesthetic requirements of building a deep recovery of these facades made necessary, with a coating system that guaranteed the costs to be frequently necessary and it was easy to apply and maintain the iconic character of color with its concept of sunset over Lake, despite the strong winters of Chicago. After a year of testing a coating Tnemec Series 1072 Fluoronar with LVEF Lumiflon technology was applied.

The fluoropolymer coating system containing the solvent-soluble material with a unique chemical structure, which ensures superior durability and weatherability.

The project was conducted in two phases. The first phase focused on repainting the steel substrate of the 44 floors of the building and anodized aluminum grilles located halfway up and soles 41 and 42. Steel surfaces were prepared by hand and were cleaned mechanically while the existing paint was removed aluminum substrate using a paint stripper environmentally compatible. The steel was coated with a modified epoxy resin and then with an intermediate layer of polyurethane 73 aliphatic series, Tnemec finally applied.

The structure is made of steel frame on a foundation of reinforced concrete caisson, covered with a skin of glass and a flat roof. 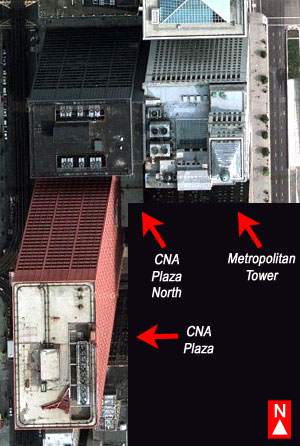 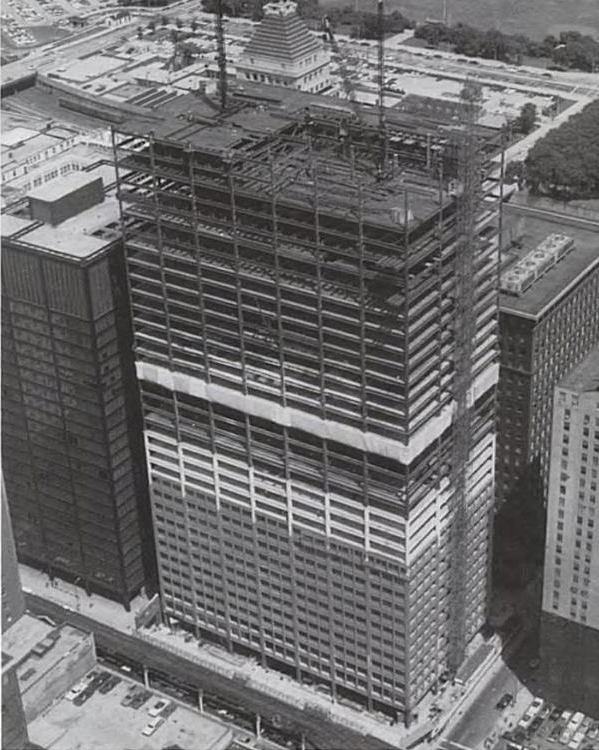 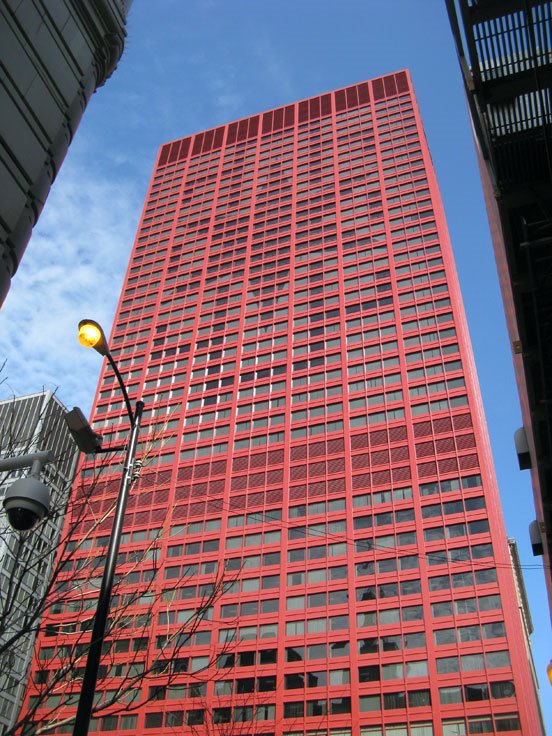 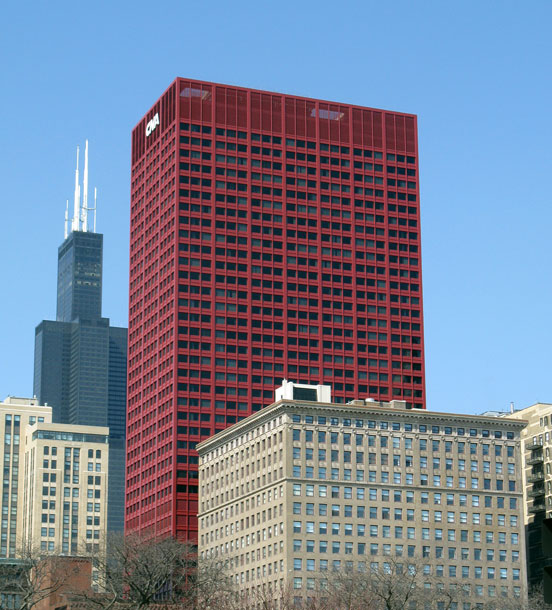 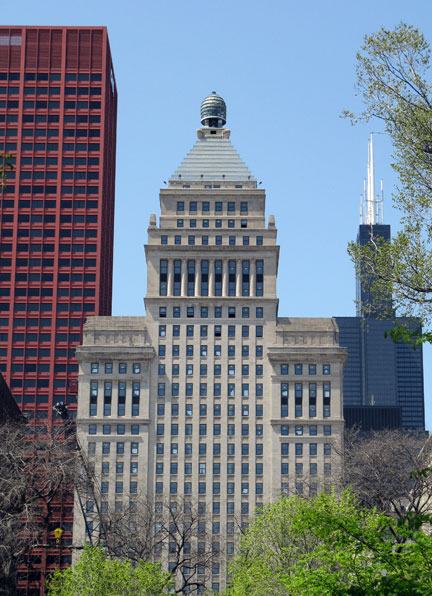 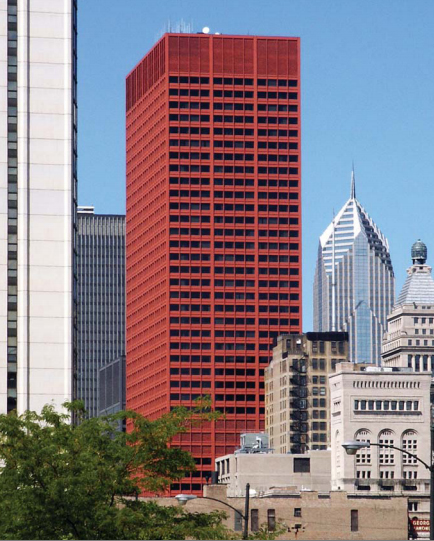 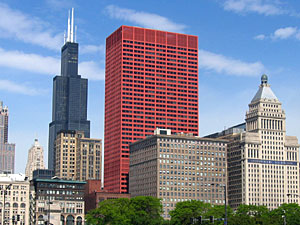 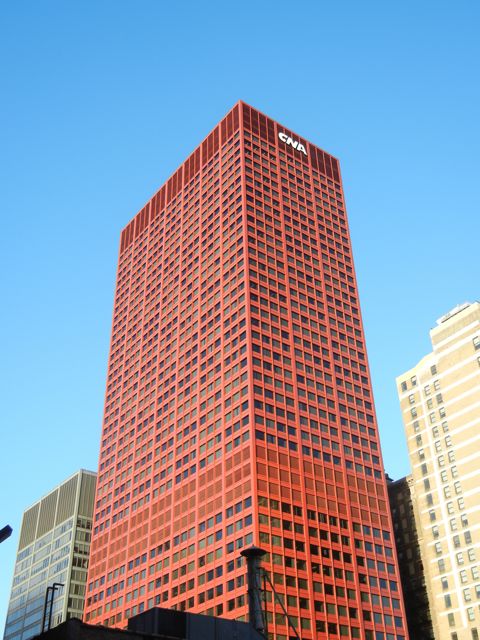 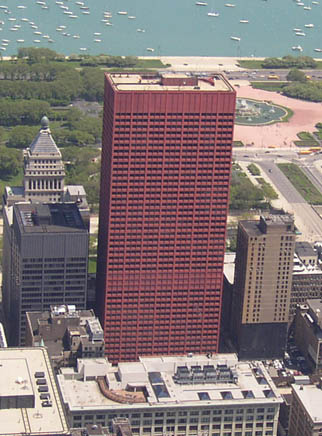 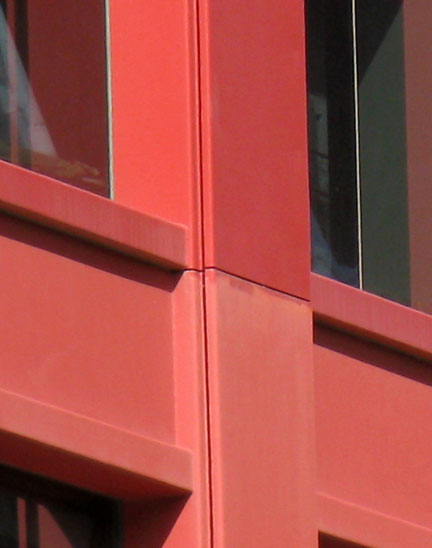 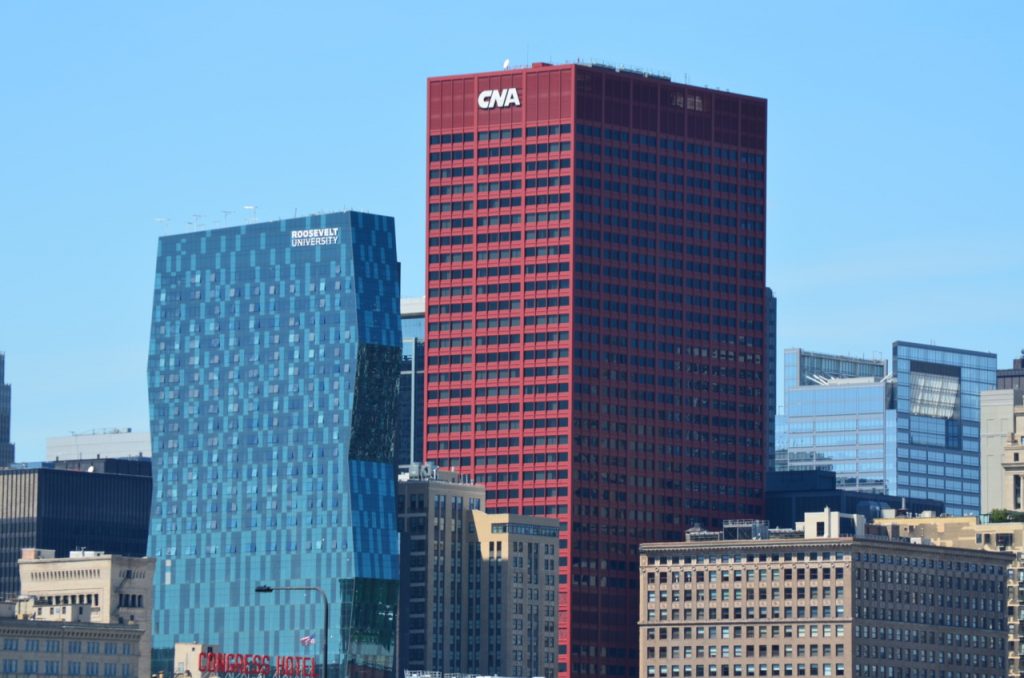 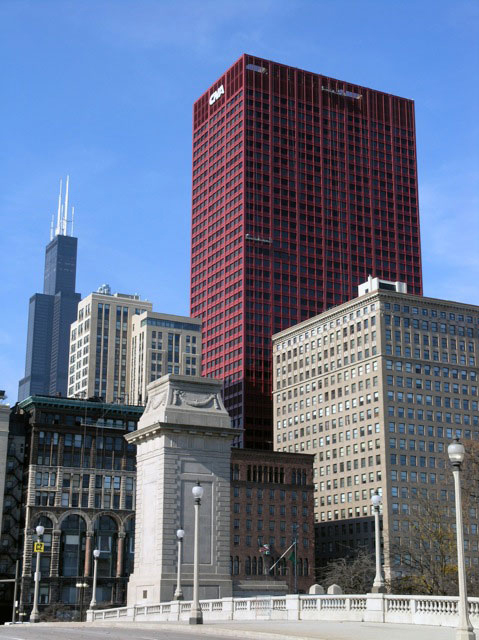 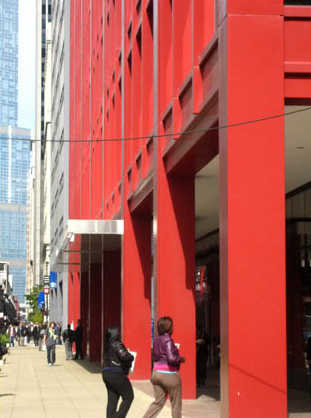 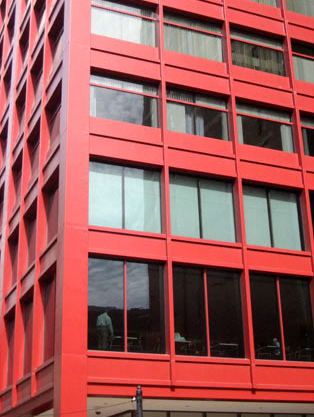 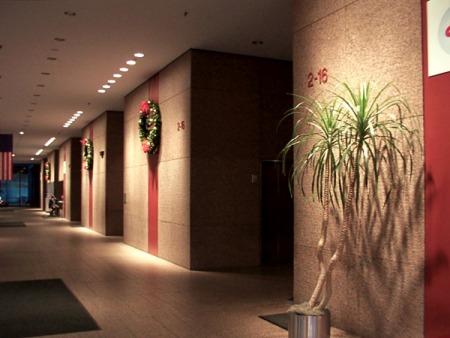 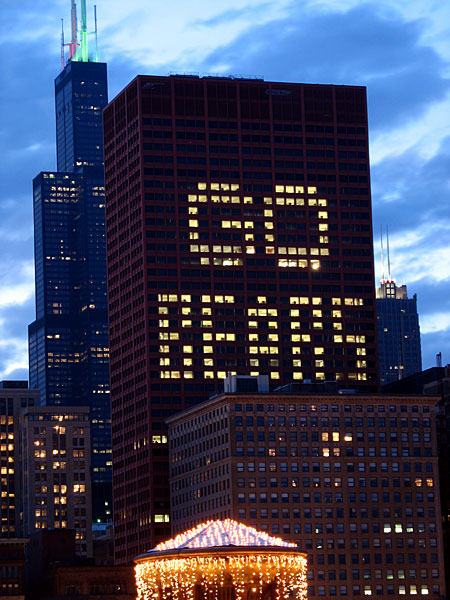 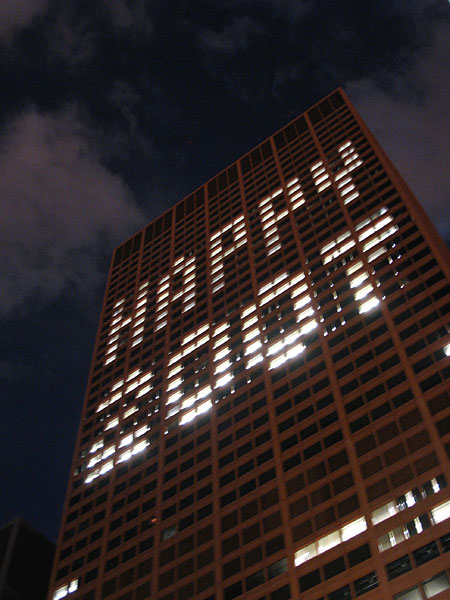 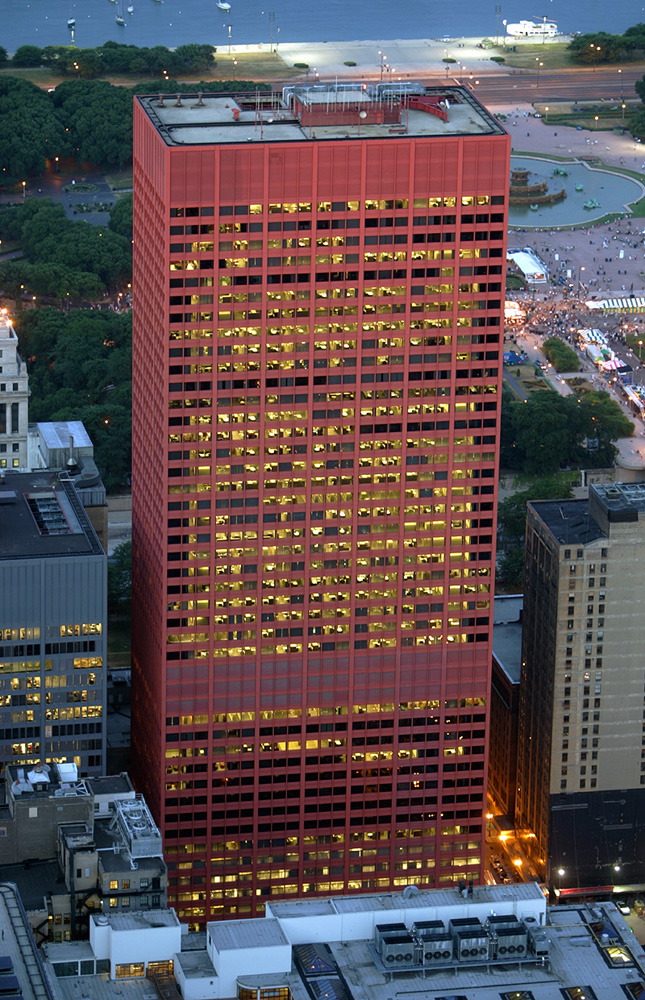