During the ninth to thirteenth century, the Benedictine movement, based on the strict observation of the rule of St. Benedict of Norcia, “pray and live far from the world’s work” was undertaken in Montecassino around the year 534, was in its heyday.

Christianity spread by natural roads of France. In the year 909, Cluny (Burgundy) Order was founded, whose expansion had so enormous an influence on culture and Romanesque architecture. Thus it is as Odilón in the first half of the sixteenth century, monks travelled from the abbey extending the purification and the respect of the benedictine discipline. The most important center of this period is the Burgundian Abbey of Cluny, which created a monastic dependency structure driving the spread of Romanesque art around the world.

The Order of Cluny reached an absolute independence from any secular or ecclesiastical power. This independence is because the abbot Bernon demanded the right of duty and allegiance only to the Papacy and to answer for their acts only to the pope, which provided them a host of privileges and donations, skirting the authority of feudal lords and bishops. With this freedom of action, the abbey took part in decisions on social, political, economic and even military issues in the various kingdoms of Europe.

The Order of Cluny contributed decisively to the splendor of Romanesque art and served as an outbreak irradiating it, besides launching a monastic reform that reached the entire European continent.

Today, however, hardly anything remains of the impressive monastic complex, only a small part of the original architectural ensemble remains: the largest church and the south wing of the crossing. In 1790, with the French Revolution, the very inhabitants of Cluny dismantled the monastery bit by bit.

From Tournus, following the expanded limestone hill and extending into the region of Mâcon, the road leads to Cluny, a small community on the borders of the Grosne that was founded by Duke Guillermo de Aquitaine.

King William of Aquitaine gave the land of Burgundy to the French monk Bernon to found a monastery, the Benedictine Order of Cluny.

The art of the Cluny Abbey, conveyed through the important mass of Mont-Saint-Vincent and the open walkways through the forest in Autumn, was inspired by the initiative of the builder Etienne, in the architecture of the Church of Saint-Lazarus.

The eleventh century was the greatest splendor of the Order, the abbey was soon quite small for the large number of monks who were housed and and they began to form priories and expand its own facilities. Thus emerged Cluny II, built by the abbot Majolus around the year 970, and especially the impressive Abbey of Cluny III, initiated by the Great Hugo and finished in mid-twelfth century by Abbot Peter the Venerable. By then the abbey had become a powerful monastic rule of incredible proportions that showed extreme obedience to the Pope and had acted as intermediary in major conflicts between monarchs and between states.

During its highest peak, Cluny Abbey extended its power in France, Germany, Italy, Britain and the Iberian Peninsula.

The monastery was expanded around the cloister garden with open space for a central square and an open gallery that provides access to the estate.

In the north wing, the gallery of the faculty communicates with the church and the remaining three branches are open to the chapter room, the dining hall and administrative placements.

On the top floor of the cloister are located dormitories of the monks, who reach the transept of the church via a staircase. The distribution of other units, such as the house of Abad, the school of novices, warehouse, cellar, stables, the guest house for pilgrims, the garden and the cemetery, is variable depending on the land, climate, the number of monks and the richness of the community.

The liturgical life of the eleventh century was developing in the church at 948; a nave and basilica with no roof and surrounded by aisles, the transept of the length of seven arches was cut by a narrow crossing, and at the ends of each of its arms opened a semicircular apse.
The deep choir, comprising a straight aisle and a semicircular apse, was flanked by two enclosed chapels and linear exterior walls.
Among the aisles of the choir that led to these chapels, and chapels further away from the crossings, were two long rectangular rooms divided internally, which means narrow corridors, connected by a single party at the crossings with the sanctuary.
The chapels were constructed in a phased manner.
The Nártex preceded the nave, surrounded by towers of the next generation. Later was added a cloister.
In the eleventh century, the church of Saint-Pierre-le-Vieux, 50 meters long, was small, so it was built at its northern flank. An abbey church, whose amplitude far exceeds that which had been done in the West: a long nave with 11 arches, surrounded by double cathedrals that add to its length, and the two transepts and ambulatory with radial catehdrals.

In the 1088 Cluny III was built on the foundations of the abbey church of Cluny I (Odón) and Cluny II (Mayeul) because they were too small for the community of monks.

The Church of Cluny, with a floor of five naves in the main body of the church and two crossings, has the floor plan of the shape of an archbishop’s cross. What precedes the pulpit is an atrium or portico of three naves of 187 meters in length, with double crossings, 6 bells and 12 chapels in the apse. The sanctuary was surrounded by an ambulatory with five apsidal chapels.

So colossal a project, 100 years later, began to weaken in the financial aspect, and its power began to fall as they dispersed throughout Europe over 1000 orders, that eventually ceased to depend on the parent, becoming more autonomous.

The largest nave was covered with a barrel vault with double pointed arches and naves with low vault edges.

It also has staggered basilica, where the light reaches all three levels. The arches and the wall above were treated as a “screen skeleton” between the semi-attached columns supporting the arches of the cross-barrel vault run.

The clerestory, with three windows on each corridor, and the main shafts of the supports were divided into three overlapping elements.

The crossing, with great illumination from its many windows, consisted of three cylindrical vaults.

With the introduction of a second crossing, which was a centralized structure independently, the proportions of the presbytery were increased.

The western facade of the church had a profound recessed portal, which was the first instance of such and then become a characteristic feature of Gothic cathedrals. 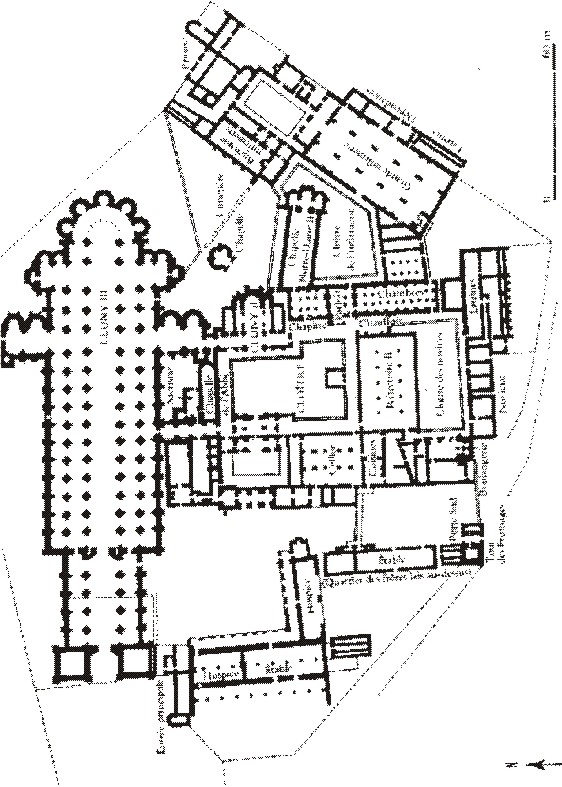 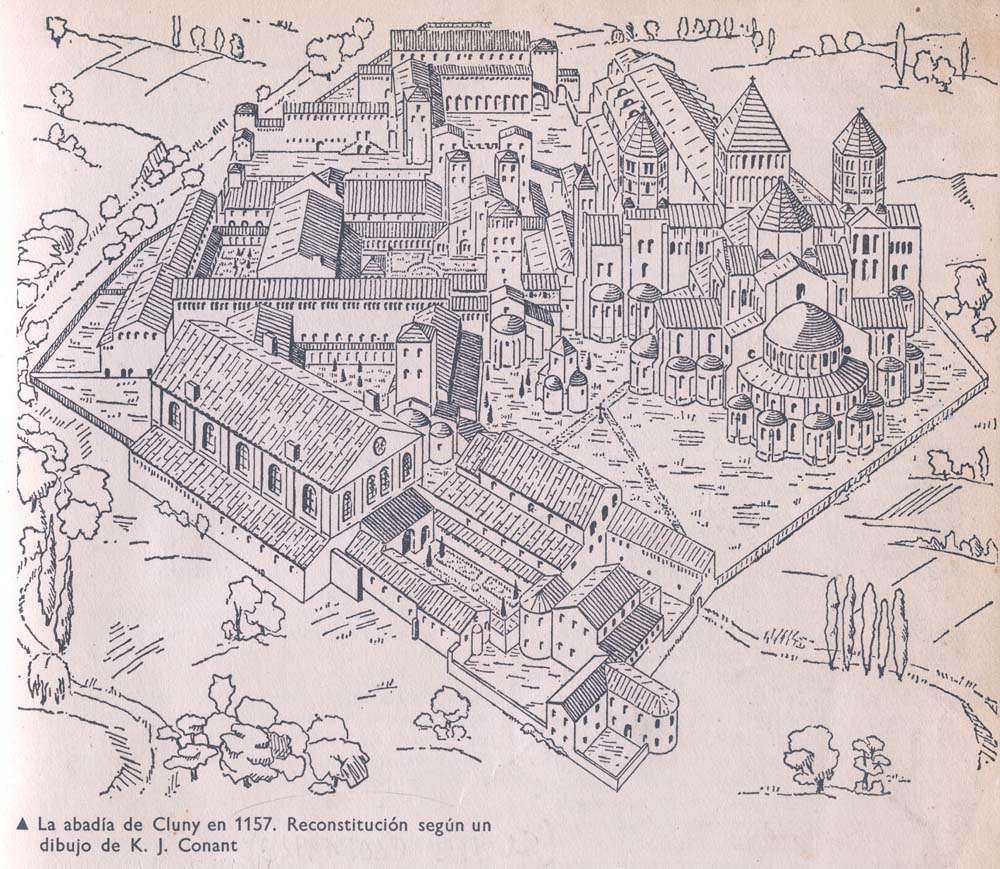 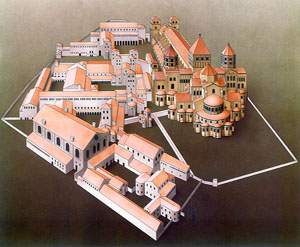