The Valletta City Gate project transformed the main entrance to the capital of Malta creating a coherent scheme for an area that has suffered a controversial and confusing urban development. The undeniable historical and architectural heritage of the place was preserved and restored, while the creation of new cultural and civic places achieved a more vibrant urbanity. According to Renzo Piano, responsible for the project, the new door of the city is very contained and austere.

“… The immense stone blocks, delimited and framed by the steel blades used to highlight the union between the old and the new, plus the two steel posts, each 25 meters high, are sufficient to characterize this Gap in the wall … ”

The key element of this redevelopment was to open the door to heaven, where the addition of two cozy stairs with gentle slopes lead people to the new door. This rearrangement frees the fortifications of the arch that previously obscured them, allowing them to be seen with all their height and power. The project turned out to be more a “reinterpretation” of the entrance to the city, and also implied the restoration of the walls of the bastion and the recreation of a square that was built in the nineteenth century, which has now been cleared to make visible the facades Of the 16th century that surrounds it.

The project is located in a crucial area of Valletta, capital of Malta, already declared a World Heritage Site, near the historical walls of the sixteenth century. Valletta is located on a strip of land that extends into the Grand Harbor, a wide bay that forms the main port of the island. The strong fortifications that surround the coast face the conflict of preserving the historic walls and at the same time satisfying the functions that a contemporary city requires.

The purpose of the “City Gate” project is to repair the historic center of Valletta, not only an architectural project but an urban redesign going through four elements: the complete reorganization of the main entrance to the capital of Malta, with The creation of a new entrance gate, the immediately adjacent place of resettlement outside the city walls and moats, in addition to the construction of a new Parliament building and the design of an outdoor theater, “machine”, inside From the ruins of the old Royal Theater.

The global project underlines a comprehensive and narrow approach. At the same time that the original characteristics of the site are respected, a new character is established. The new gate of the city is kept away from the ostentatious decoration and instead, it focuses on reviving the original heritage of this significant part of the city.

This urban project manifests the intention to implement not only a new work of contemporary architecture but also to re-create a permeable and functional urban block within the historic center of the Maltese capital. The old car park was replaced by gardens where the public, besides relaxing, can organize outdoor events.

Landscaping in the ditch and surroundings

Generally the width of a bridge is defined in relation to its length. In the case of the bridge that crosses the trench to the gate of the capital of Malta, it lost that proportion since it was, over the years, repeatedly enlarged, losing not only its original form but also its function, resembling more A square that a bridge. With this project the architects intend to give back to him the dimensions that had in 1633 with the reconstruction of Tommaso Dingli and that the passers-by recover the sensation of crossing a real bridge.

Acting as a visible and cultural post, the entrance and the next esplanade have become a dynamic and active space that provides flexible spaces for cultural events or exhibitions.

The first door to the city of Valletta, probably a single tunnel, like the bridge has been modified over the years, considerably altering the image of a door belonging to a fortified city. The most recent modification, made 50 years ago, demolished 32m of the city wall, distorted the impact of the entrance.

The first objective of the project was to restore both the original sensations of depth and strength of the wall, reinforcing its narrowness and embankments, with the opening of points of view to República street. The new city gate is a “gap” in the wall only 8 m wide. The relationship between the original and new fortifications is clearly seen with the insertion of large steel blades 60 mm thick that cross the wall between the old and the new.

The Parliament building consists of two large blocks of stone resting on thin columns to give the building a feeling of lightness with regard to the layout of the existing major road. The northern block is mainly dedicated to Parliament’s Headquarters, while the South Block stays in the offices of Members of Parliament, the Prime Minister and the opposition leader. The two blocks are separated by a central courtyard, which also serves as the main entrance of the building.

Programs related to parliament will be housed in the most private areas of the basement that has direct access to a garden space in the courtyard.

The ruins of the Royal Opera House, the work of the English architect Edward Middleton Barry, were a delicate point in the restructuring of space. Initially the Parliament building was thought to be erected on the site of the ruins but Renzo Piano himself proposed to move the building to the adjacent open space and reclaim the place as a multi-purpose outdoor theater.

“… I like the idea of ​​uniting the past and the future, history and modernity, in a place like La Valletta and in the ruins of something that was so dear … The real sacrilege would have been to destroy those ruins. , But keep those ruins, give them dignity, give them functions and add machines, modern machines to make art … I think that’s great, that’s part of magic … “(E.Piano)

The vestiges of the old columns were propped up with steel masts, supporting a system of translucent screens. During the performances the screens slide vertically to isolate the theater from the crowded streets nearby.

The project structures are steel with reinforced concrete cores, connected to each other and integrated into several levels with existing structures. An underground tunnel runs through the whole area from north to south.

The office building rises 3 floors. The ground floor characterized by the colonnade that supports the building is open to the public. The structural frame is reinforced steel with concrete core created by the staircase. The outer roof of the upper two floors is entirely made of local stone blocks.

The columns that rise to the first level are made of steel and concrete. They consist of a box section (20 mm sheet steel S355J0), a reinforcement cage preassembled out of place (steel B450C) and filled with concrete in situ. These columns come from different levels including the ground floor, the Lower Garden of the basement floor and also the underground tunnel, which represents the old railway access to the area. Due to the size of some of the columns and the logistics of the place, its realization was difficult due to the very limited space available so it was necessary to weld some columns that were assembled fragmented.

The supporting structure on the first floor includes box beams located along the perimeter of the floor, with a height of about 1 meter, joined together by screw joints. Such structures are not positioned in axis with the underlying columns to allow the subsequent support of the facade elements. On the other hand, on both sides of the building the box beams are not supported directly by the columns, but protrude from the welded pillars of the cantilevers. The remaining floor beams are made from profiled laminated bars and have installation holes.

The Chamber building has a structure similar to the Office Building and includes the large empty space of the parliamentary chamber and the stands for parliamentary sessions. In this case, reinforced concrete cores, apart from operating as struts, provide space for service rooms, stairs and elevator shafts. The perimeter structure, covered in stone like the office building, supports the roof which consists of two large asymmetric reinforcements and an irregular pattern of secondary beams.

The ceiling beams, 25 and 32 meters in length, are formed by two segments each connected to HEM section bars. The central connection is represented by a trunnion and welded connection discs. The secondary beams are arranged radially and are made of a welded mixture. The parliamentary chamber reaches a height of about 11 meters and receives overhead light. A photovoltaic system has been installed at the top of the roof.

The structural frame of each façade consists of bracing modules and internal modules in RHS 200 * 150 * 10 section bars welded off-site. The assembly of the different parts was done directly through joints screwed on site. The vertices of the structure of the facade on the west side, facing the main street, were made with welded tripods. All section bars have, as for the office building, holes for connecting the substructures for fixing the stone cladding.

The open air Opera House is north of the House building and emerges among the ruins of the former theater bombed during World War II. The project consisted in the construction of a structure designed to be easily transformed through movement mechanisms that are used in different stations.

The structure is created with perimeter columns placed between the existing ruins that besides defining the space they serve as support for the American beams where the lights and lights are fixed. With a variable height of up to 16m and a weight of 3tn each the height of the crest remains unchanged while the height of the foundation changes from column to column. In this way, each column is a unique piece unrepeatable.

It includes a space for the public made with steps of a length of approximately 22 meters and a height of 3 and a weight of about 7,100 kilos called “trusses” on which the seats rest. Below this area there are spaces connected to the former head of the theater. The seats are removable to create a “public space” during the winter. The stage is a structure similar to that of the stands and is formed by four horizontal beams on which the stage is supported. It also has a space for the orchestra.

For the success of the dialogue between the historic buildings, the modern architecture and the important old walls is that the option of using as stone material of the sand colored area was chosen, without concessions to a nostalgic or fashionable use. The stone cladding is the functional integration of the built landscape and at the same time a chant to the formal and technological innovation. It took 7,000 blocks, extracted in Gozo and cut with laser in Italy.

Most of the main facade of the New Parlamente has been sculpted with a numerically controlled machine, resulting in a porous three-dimensional pattern that pretends to be something more than an exterior finish of the building, has relied on the stone to fulfill new functions that Go beyond general protection, it has been thought of for energy, helping indoor ventilation, and for control of lighting within the building. This explains the brises-soleil elements designed according to the angle of the rays of the sun but, nevertheless, integrated in the structure of the building. The roof was covered with 600 square meters of photovoltaic panels.

In the construction of the Parliament building approximately 600tn of steel structures were used in the office block and 500tn in the chamber. In the outdoor theater 240tn. 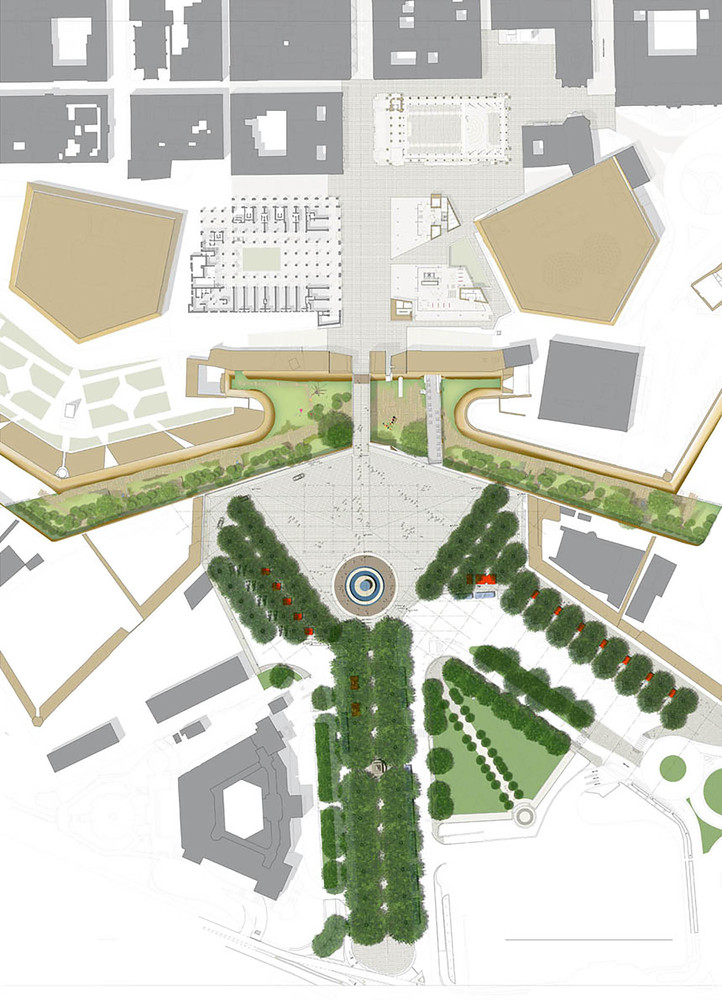 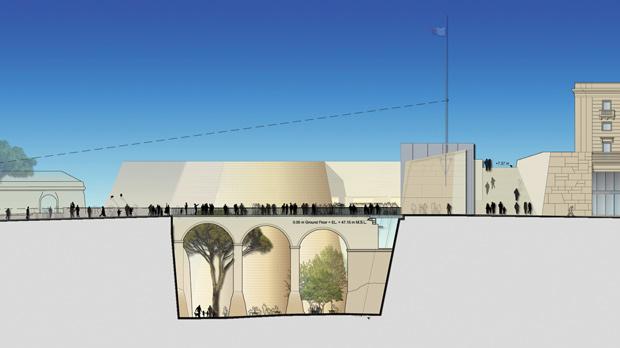 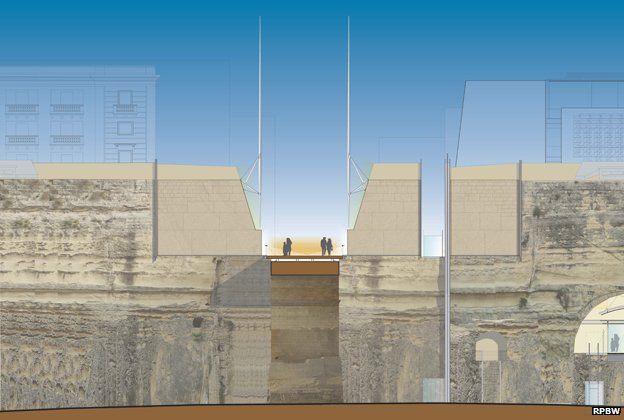 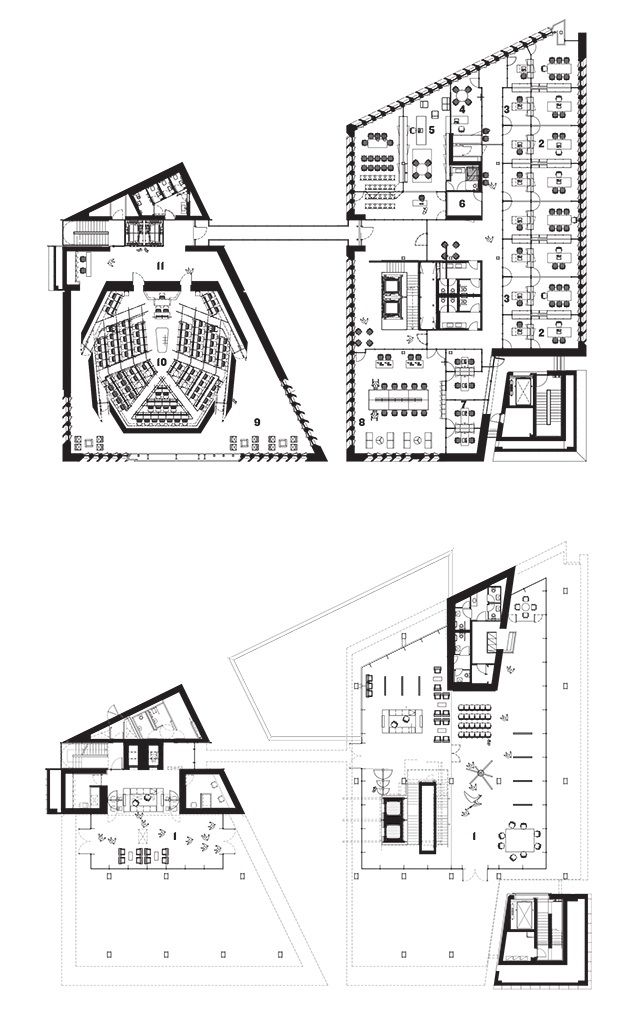 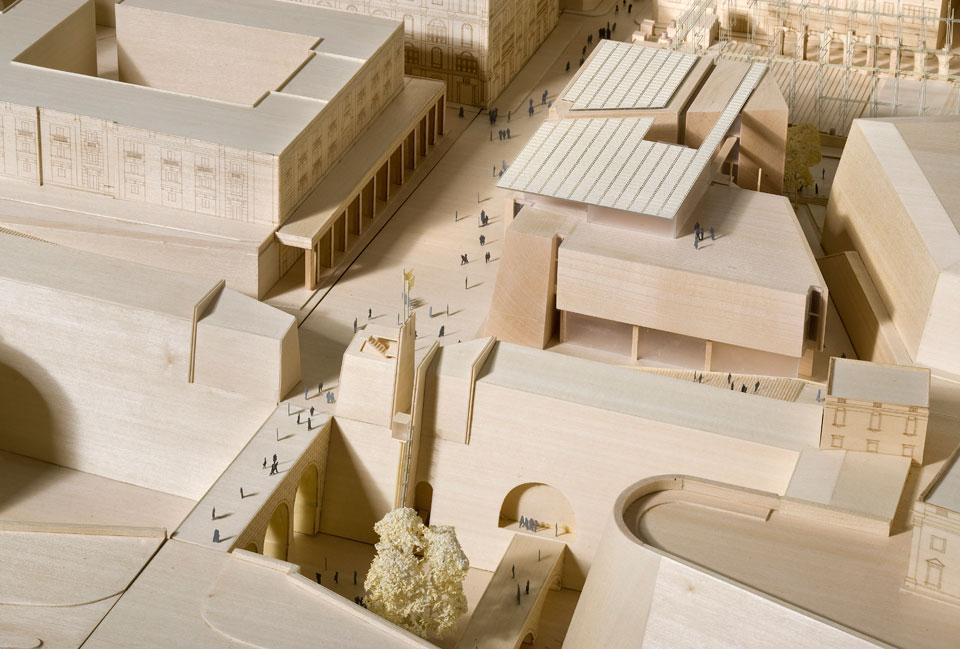 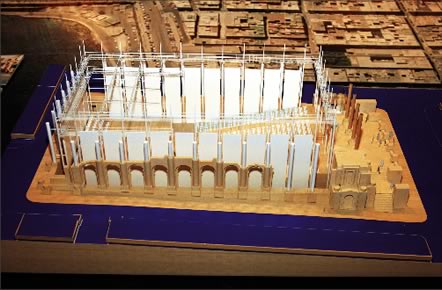 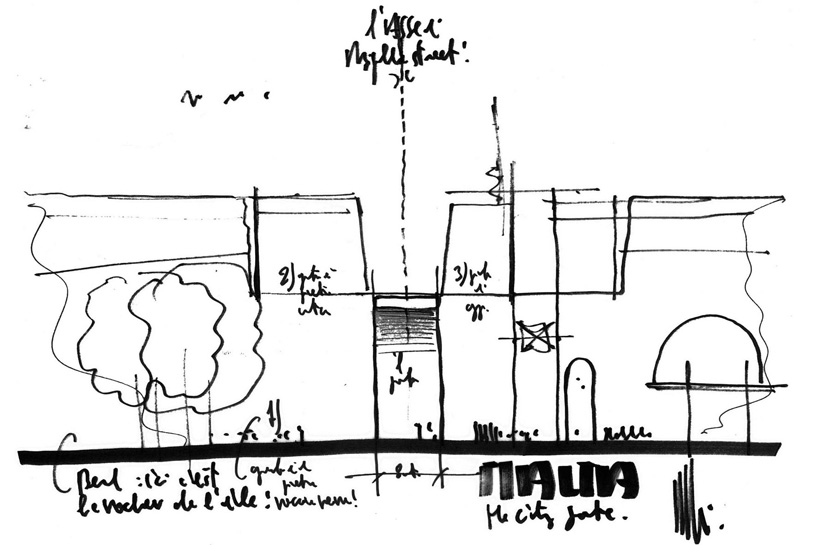 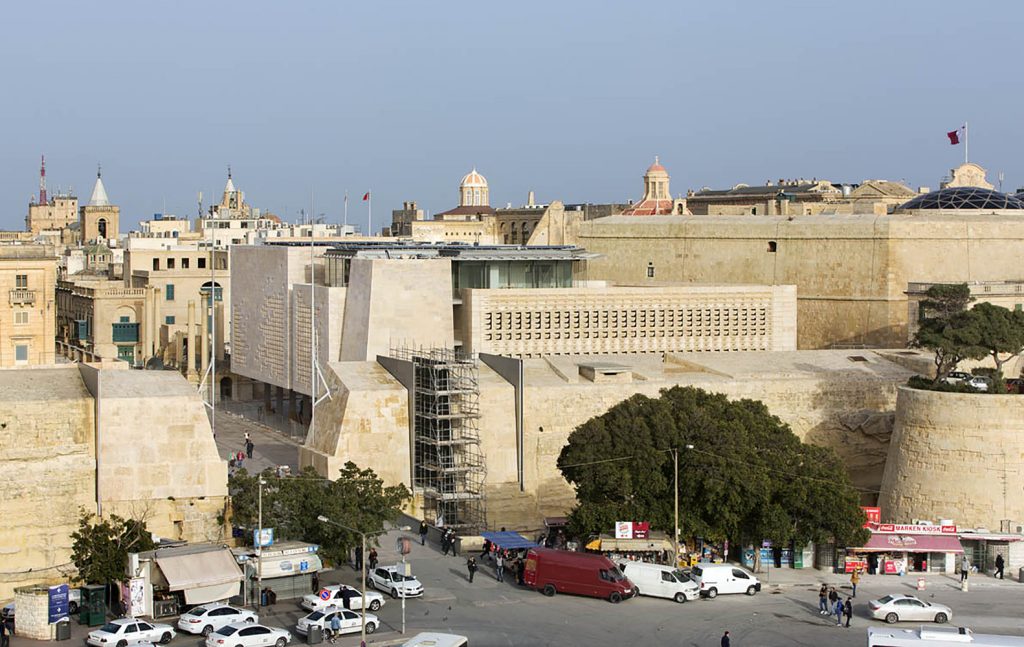 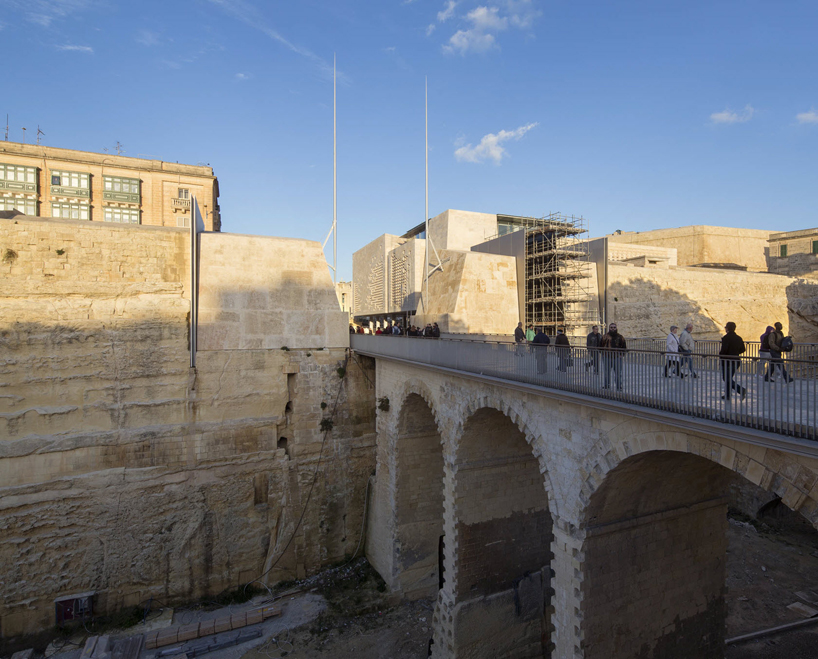 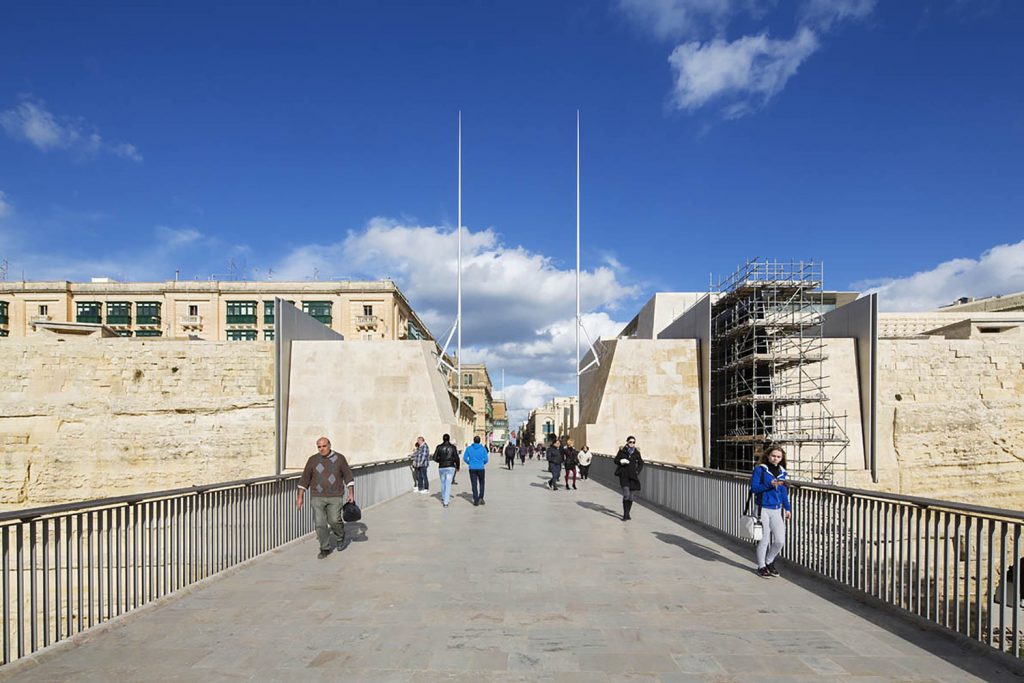 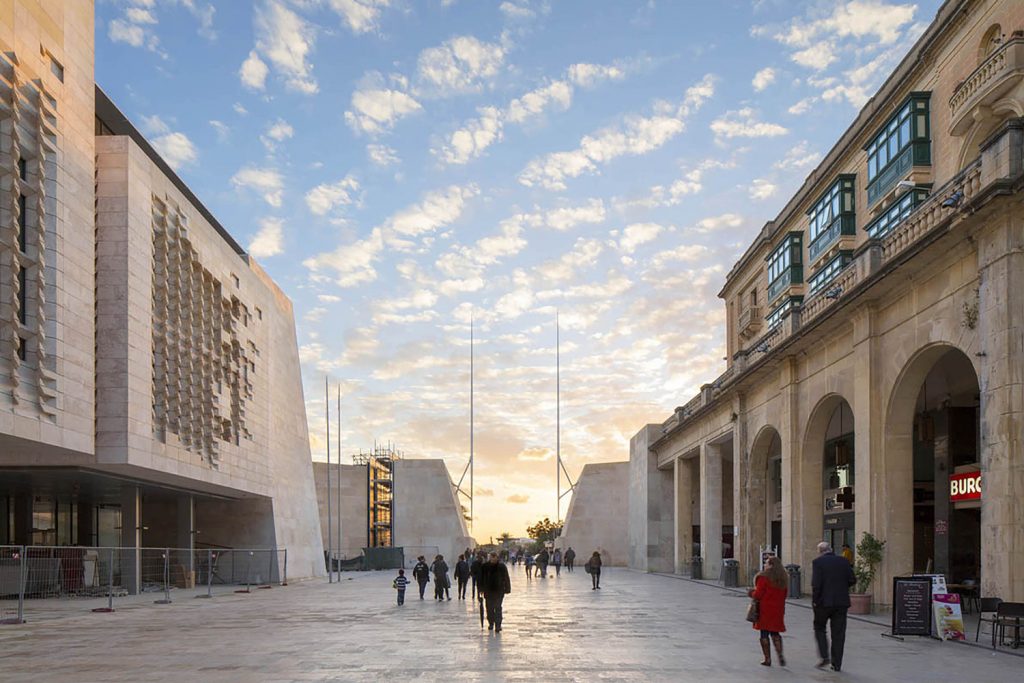 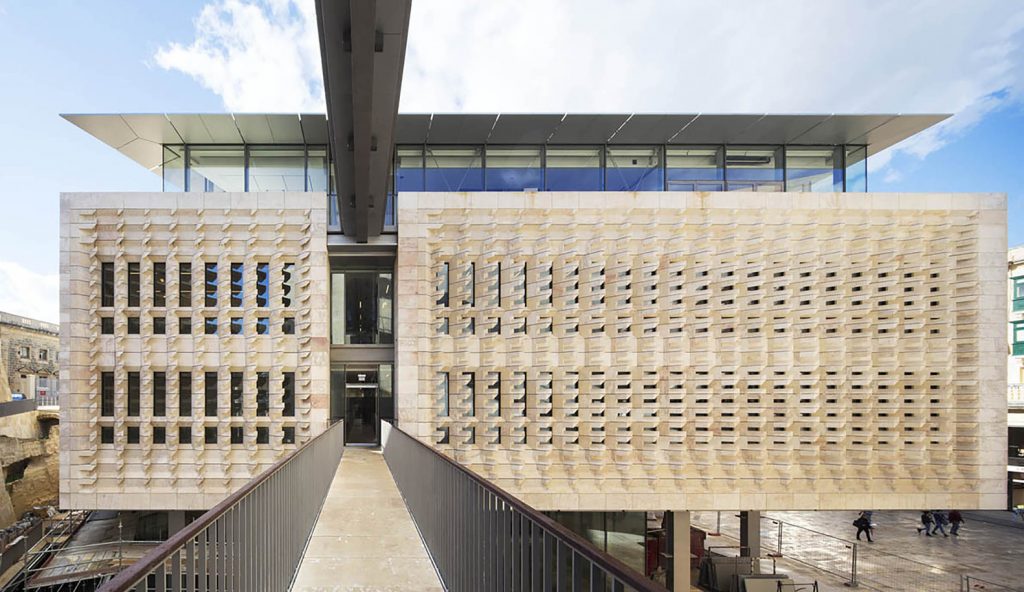 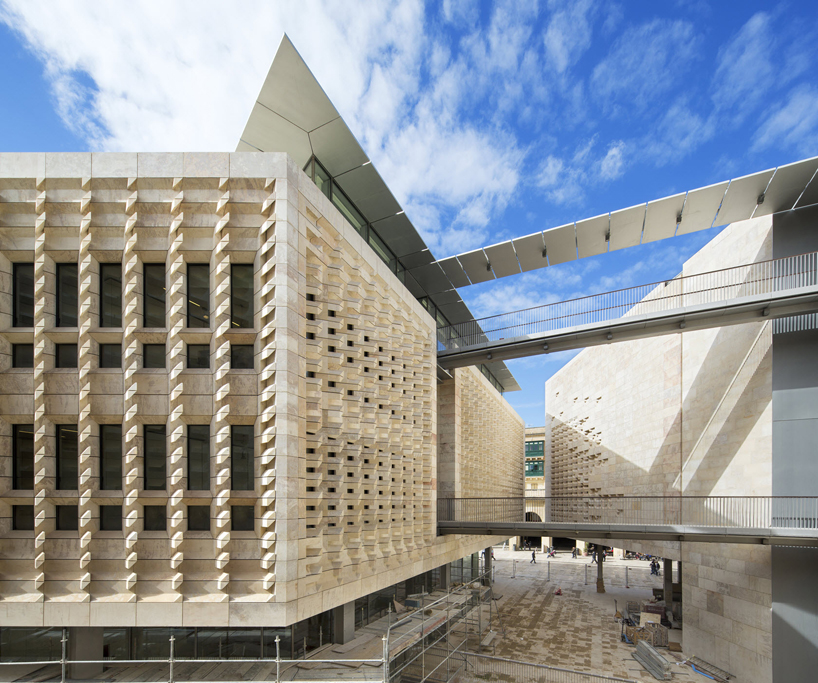 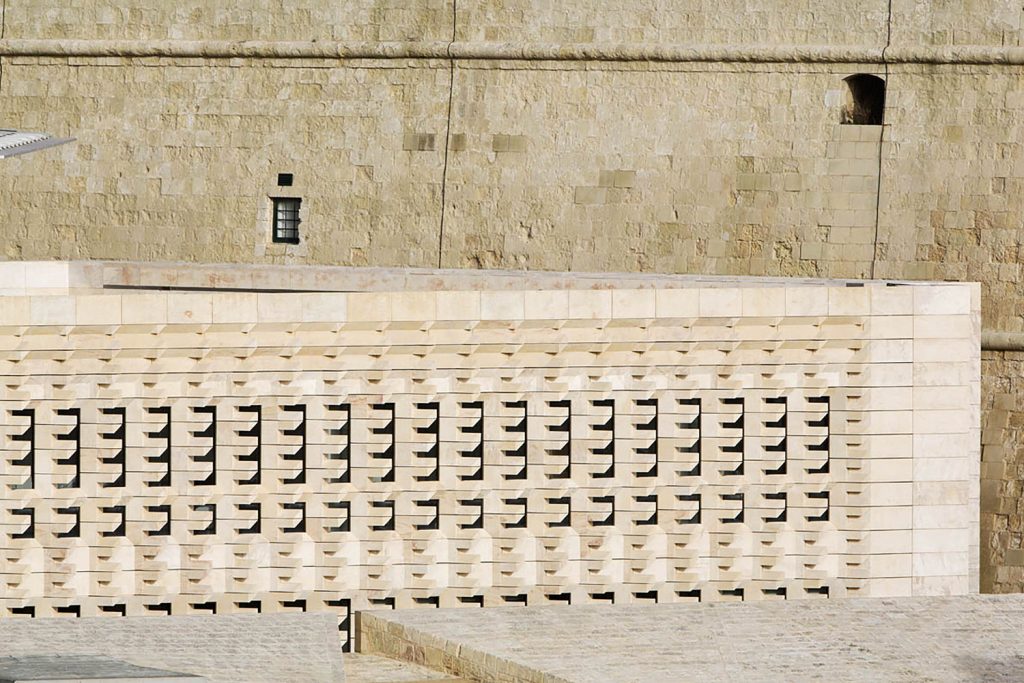 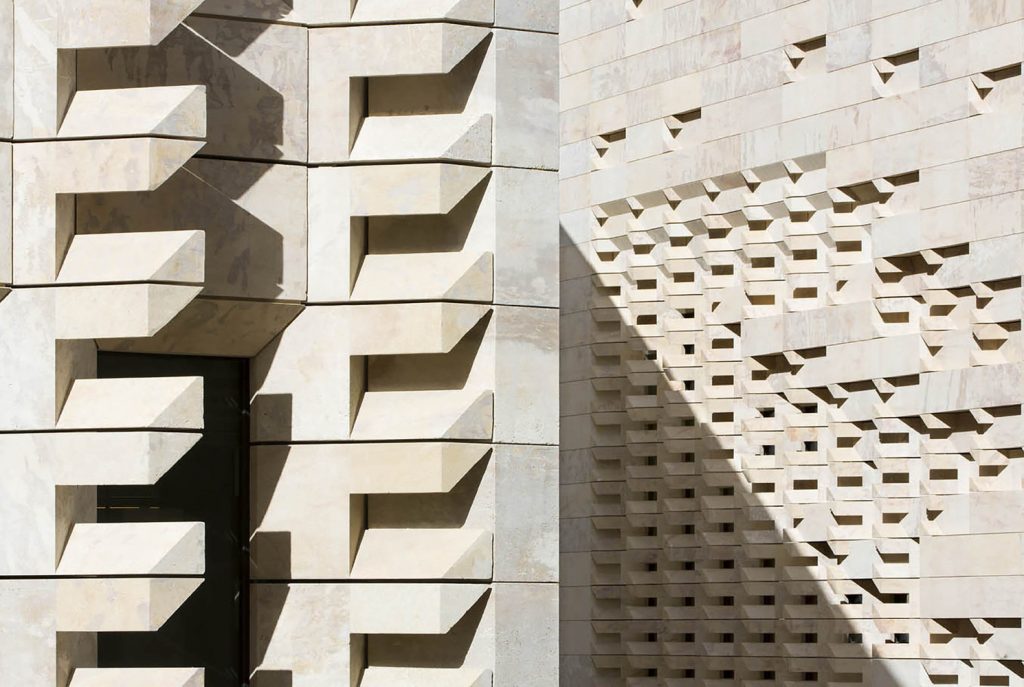 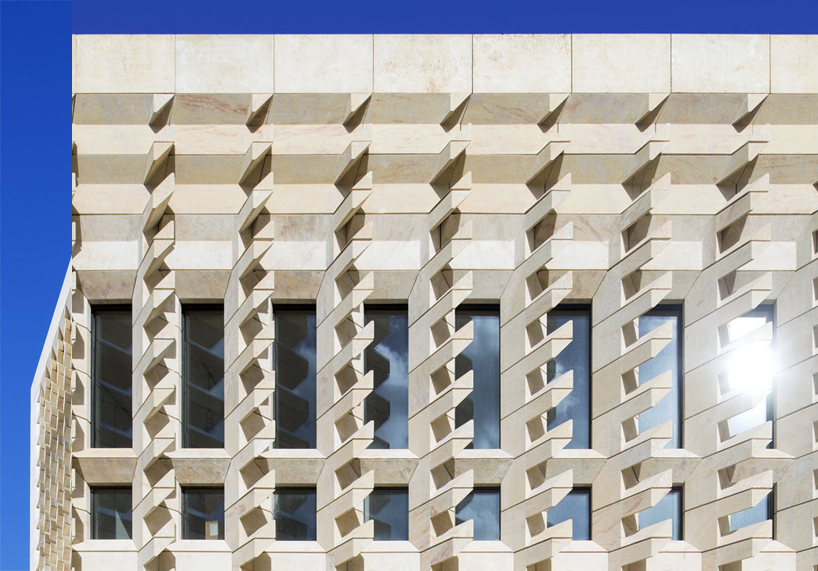 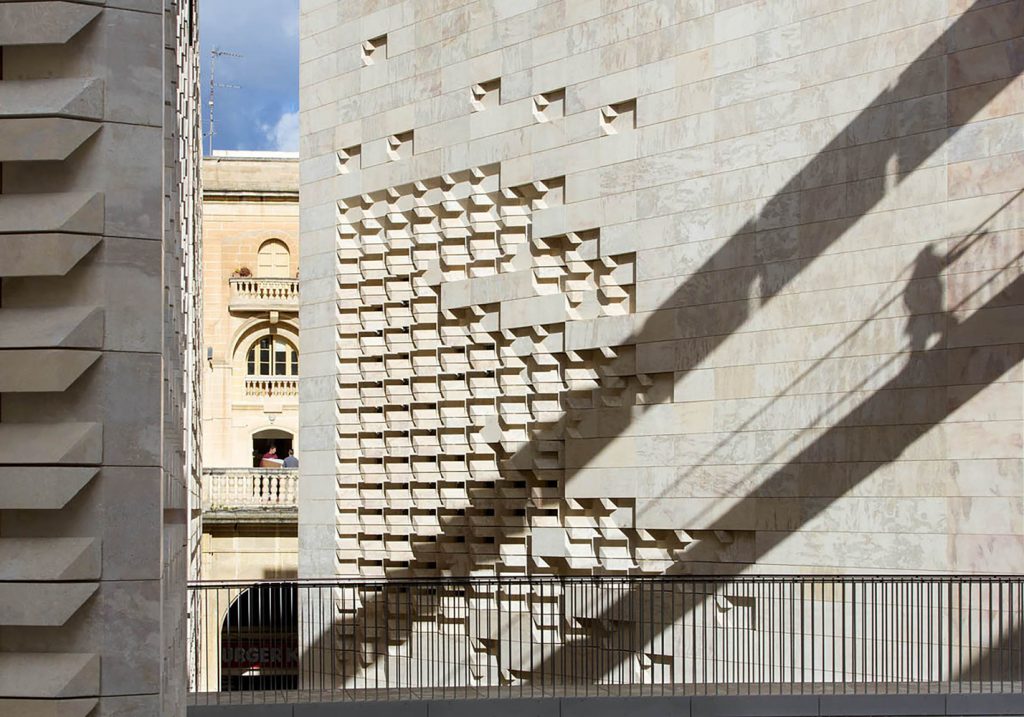 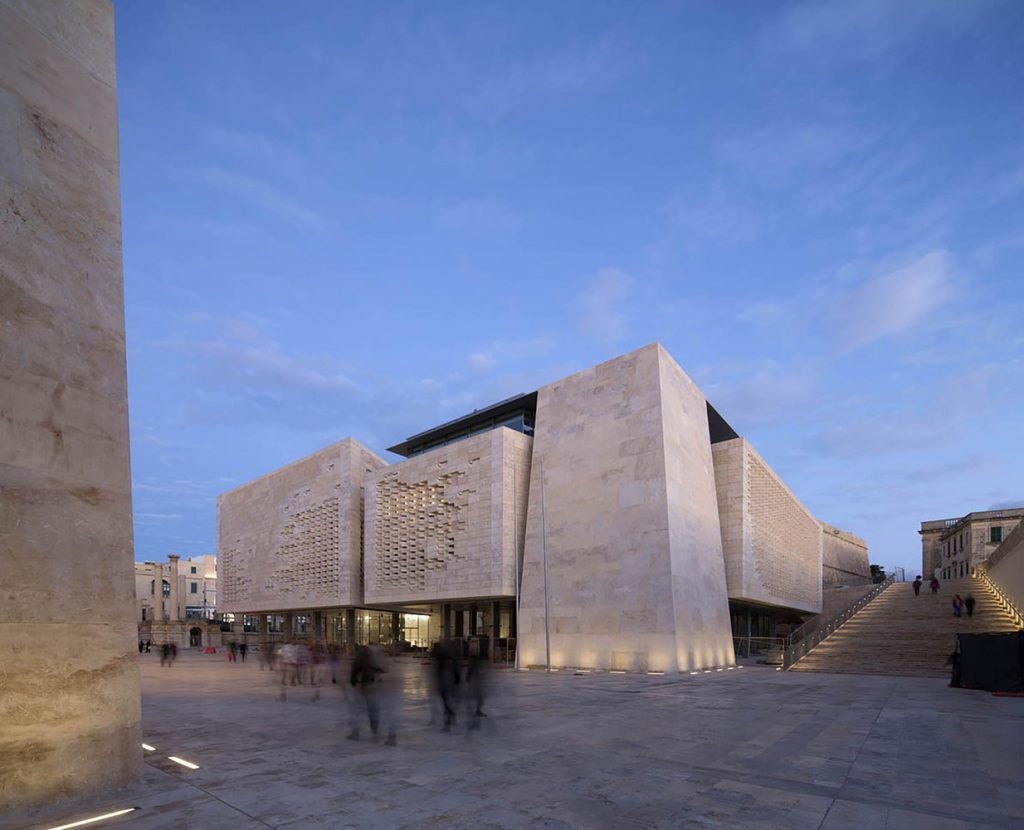 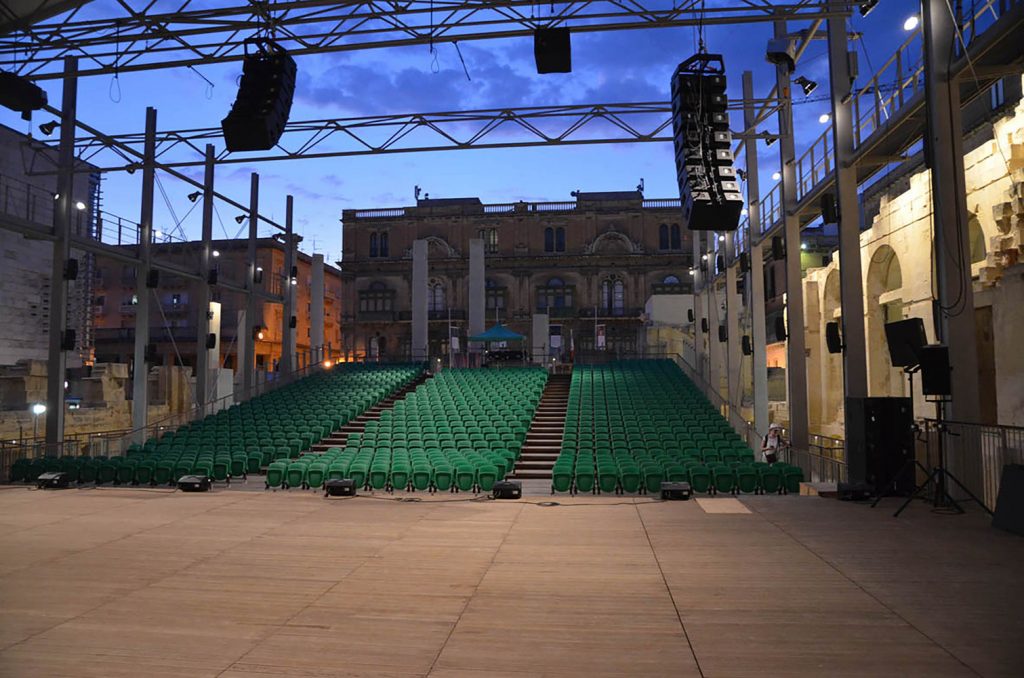 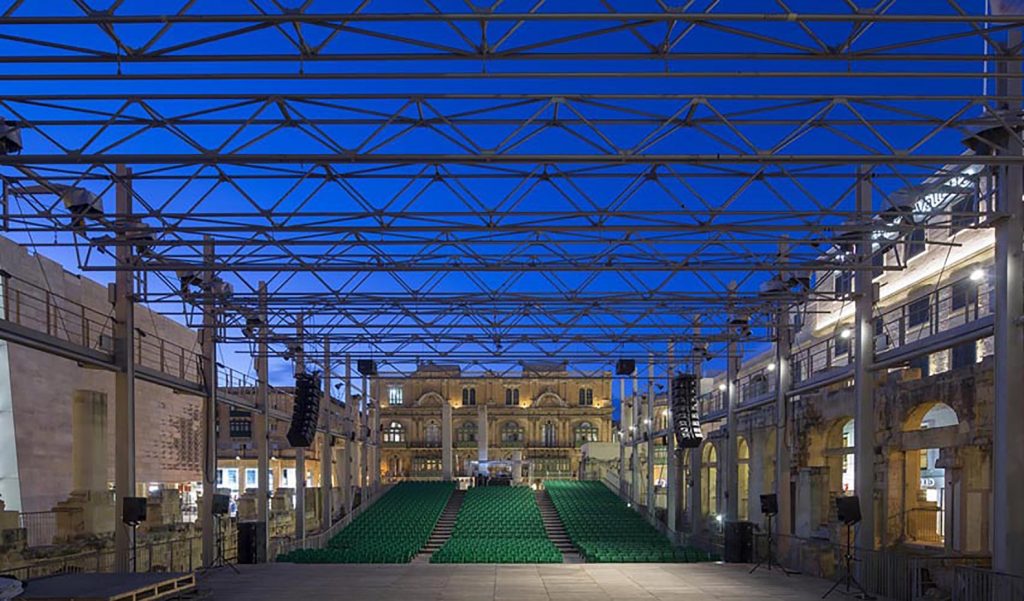 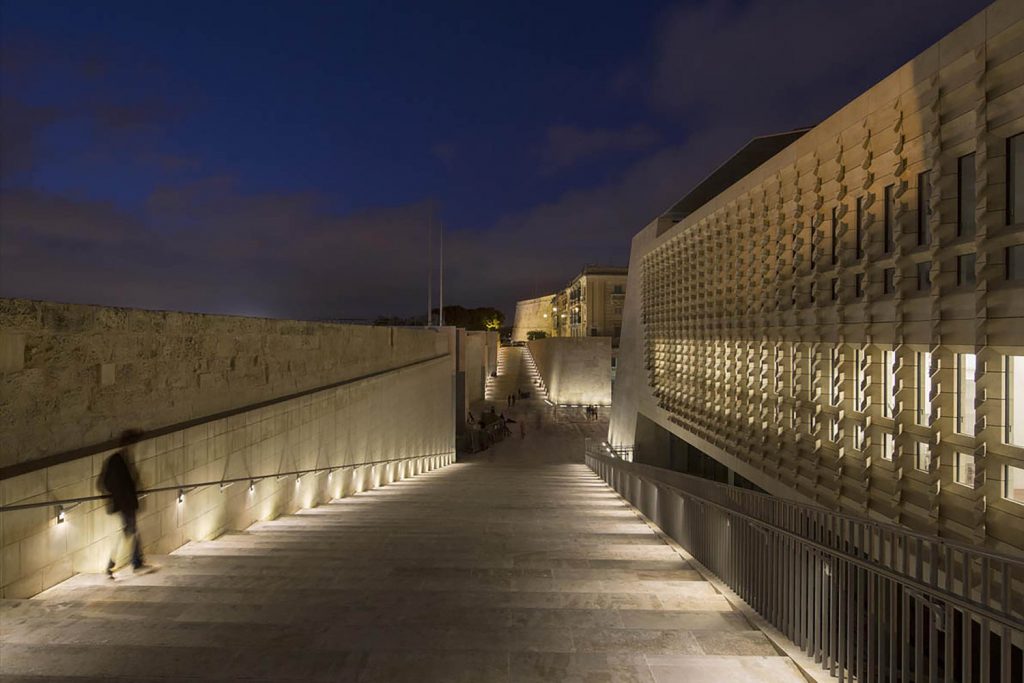 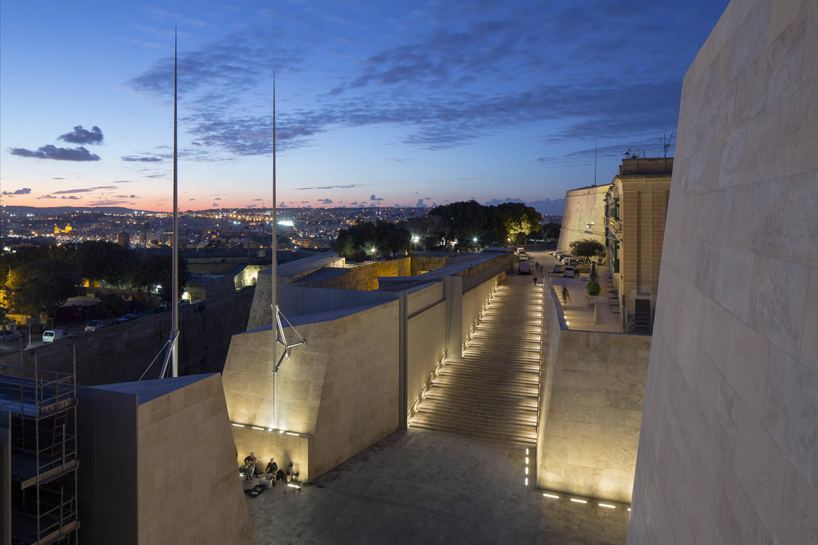