Church on the Water

It is necessary to highlight Ando‘s capacity for absorbing different ideologies and expressing them in his projects. We see that this quality is present throughout his work, but it is particularly clear in this case. The relationship with nature is once again highlighted as a principal concept of this work.

The church is found located close to Tomamu, in the heart of the island of Hokkaido, Northern Japan. It is a small chapel which is attached to the Alpha Resort hotel. With its back to the hotel and separated by an L-shaped wall, Ando establishes a sacred chamber, isolated from the mundane and focuses all the visuals toward a small forest of birch trees through which a stream flows, which is situated in front of the temple.

Enveloped in an aesthetic without ornamentation, many of Tadao Ando‘s works base their worth on the relationship of the building with nature. In this sense, the Church on the Water is one of his most successful projects, in that it uses nature as an implicit element of the design. In it, Ando succeeds in creating a microcosm in which he combines concepts related to the sacred and the secular, the artificial and the natural, the hidden and the exposed, the infinity and the void, in a simple but ingenious manner.

The most noteworthy aspect is that Ando has substituted the frontal wall of the temple, in which there would traditionally be divine images of certain religious significance, with a more vivid and eloquent representation of the Creator: nature itself. In this way, he creates a living, multicolour and ever-changing scene, that changes from the sepia tones of autumn to the glaucous hues of winter; from the florid blooms of spring to the intense greens of summer.

Ando‘s architecture is based on a clear geometric order. The composition of the Church on the Water is based on the intersection of two volumes (a prism with a square base of 15 metres each side and a cube of 10 metres each side) which share a corner on an area of 5 by 5 metres.

The complex is separated from the hotel by two arms in an L-shape of 39 metres and 75 metres, located to the East and South respectively. This permits the user to discover the church by walking round it and entering at the Northern end.

The pond in front of the church is a rectangle of 45 by 90 metres, bordered by four platforms of 15 metres which establish a virtual enclosure: a perfectly visible aquatic plaza with which the user cannot make physical contact and which connects the church with nature. At the same time, the space of the chapel extends out to the exterior, maintaining a visual and symbolic link with the metal cross which sits in the middle of the pond. The act of transferring the cross from the interior of the church further increases its visual impact.

By rounding the L-shaped wall, the visitor ascends and descends small steps which surround a space defined by four crosses. The crosses define a transparent cube intended as a divine space that disperses toward the cardinal points. The space within the crosses is a small square with a glass roof and benches arranged around its perimeter. The crosses are 50cm thick and arranged in such a way that their outer vertices are separated by barely 5cm, adding to the dramatisation of the composition. In a more ethereal reference to their original form, the crosses are housed within a transparent cube; a metal structure covered with laminated glass.

Next to the chapel there is a 6.2 metre high concrete portico, supporting a beam which extends 15.9 metres. This portico symbolically reinforces the idea of transition of the profane to the sacred, while functionally, it houses the sliding screen which sits between the church and the pond. In this way, when the weather permits, it is possible to pull aside the screen, maximising the intimate relationship between the chapel and its surroundings. To avoid interrupting the continuity of the aquatic surface, the rail of the sliding screen is slightly submerged, making it imperceptible from a distance.

In a corner of the chapel, adjoining the semicircular staircase and discretely hidden below the light cube, there are three waiting rooms as well as hygiene services, placed around a cylindrical glass space which receives overhead lighting via four glass surfaces (those which constitute the floor of the square of crosses).

The interior of the chapel is impeccably sober. Five rows of wooden benches are placed in pairs at each side of the room in a very simple design.

The walls of the chapel contain a number of fenestrations which provide a light source, establishing a guideline next to the exposed concrete grid, which is typical of Ando’s constructions.

The materials used are exposed concrete and glass. The floor is covered with black granite slabs.

Church on the Water 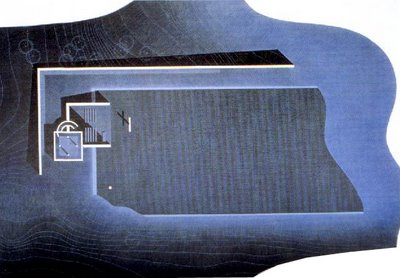 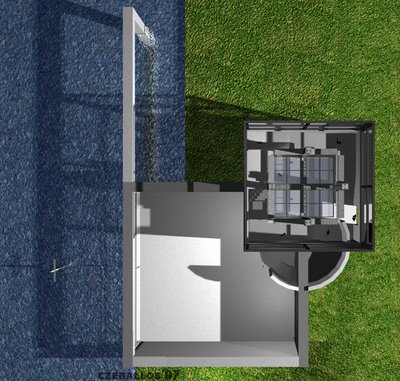 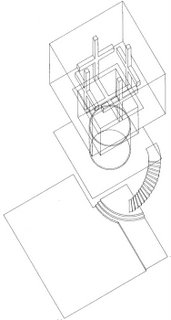 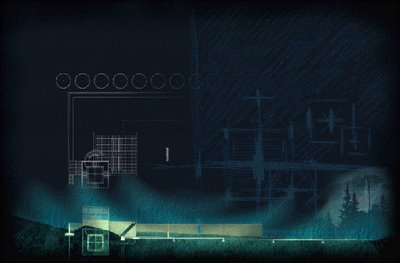 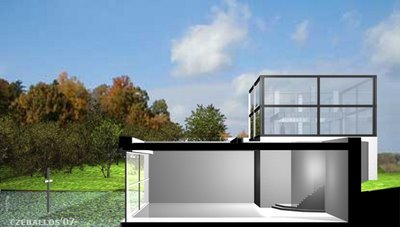 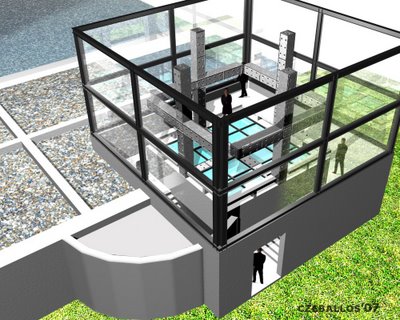 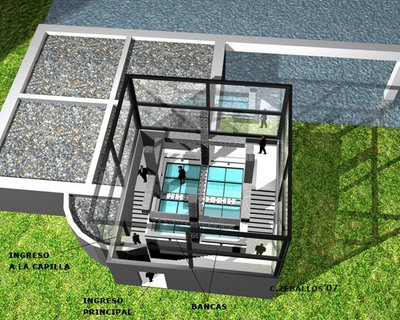 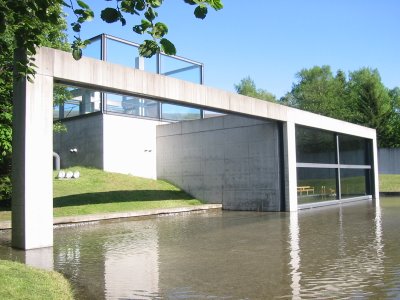 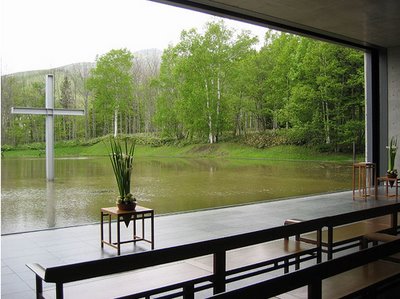 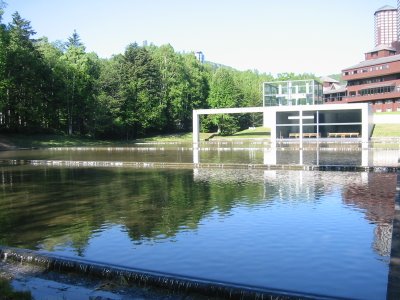 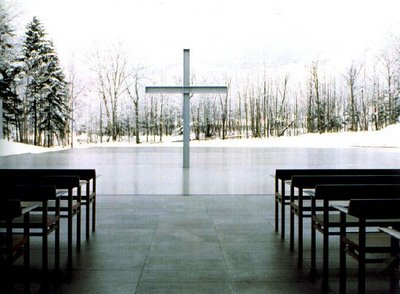 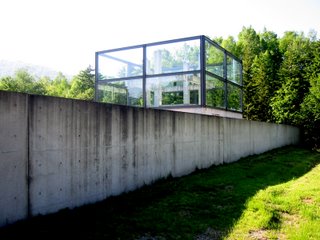 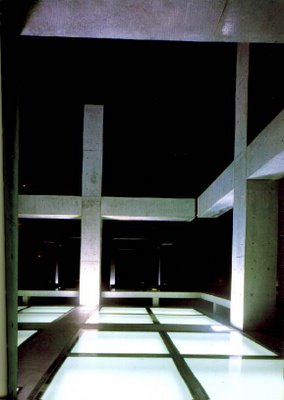 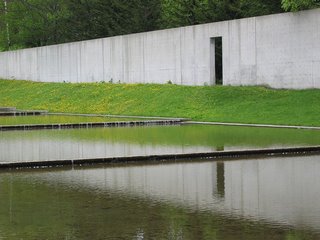 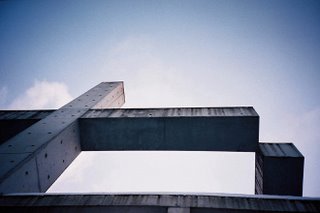 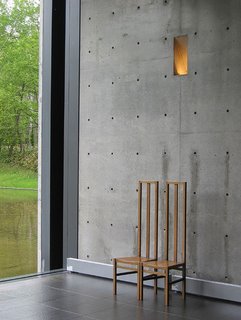 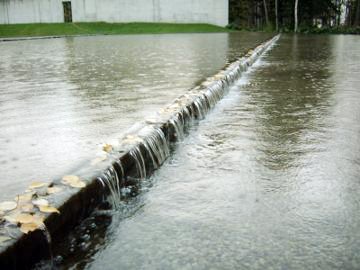 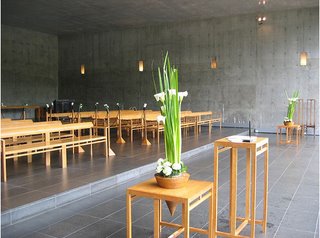