Church of the Three Crosses

This church was part of the Management Plan for the industrial community of Imatra, in southeastern Finland, completed in 1953. It was a newly founded city that absorbed three existing populations. The project was the last piece to complete the plan.

This church is seen as one of the most original place. She also confronted the religious and functional to begin the design. Aalto began working on the ground for this church in 1955 and completed in 1958. High acknowledged the important role that the church have on the industrial town in a magazine article Arkkitehti, no 12, 1959.

The design of the church in Vuoksenninska seems to start from the general shape of an irregular trapezoid, common in other churches of Aalto, evolving into a form resulting from the addition of three halls on the ground. At Imatra, Aalto is to provide separate spaces for the parish, with the ability to unify with a uniform when the need arose. He developed a more comprehensive that generated from a previous competition, a church in Lahti, the plan of establishing a tripartite fan.

Also in the 50s and 60 `s there was a tendency sculptural design of the towers of churches, which culminated in this project. The tower would be designed as a sculpture for the call to the church. This is located in the space B is an addition in one of the corner of the volume or box that attaches to one of the three spaces.

The conservative nature of the church forced to meet requirements such as the aisle to the altar, placing the body to the right of the altar and the pulpit to the left, had to strictly follow this provision. The interior is almost completely white, with huge fins that traverse space, and undulating walls, with separate internal and external linings to enable mobile walls can hide.

The noise was empirically studied by a model in the study, playing with variations in the reflections on the surface of the roof of the light rays emitted by a source placed in the pulpit so that the volume and direction of the waves could be investigated.

The space was designed as a versatile space, has six hits over the buildings and part of the sides, divided into three zones, each having its own shell conformation in all of them there are different lighting slots that make the place has different color themes.

The church is one of the many forests of Finland plans as an area characterized by cold, damp and dark much of the year, so that Aalto had three shells in the interior and exterior.

Most of this structure is of reinforced concrete, allowing you to shape and pose continuous frames spanning the three sections A, B and C in any manner that could provide appropriate forms for the operation and design goals of Aalto.

From the porches, the results are open plan spaces, as only lower columns on the boards of each space, but remains free to adapt the other rooms at one or each working space for itself by movable walls to close or open areas.

The concrete provides a thick, massive backdrop so that the sound can bounce off the ceiling and may be made of horn. The shells also have good sound, have good lighting, because each has different slots that allow access of light to create shades of white, as is the case.

The floors are made of different materials in some areas such as access and adjoining rooms were used and brown ceramic tile in the central part of the enclosure of wood as the court.

The woodwork in general are metallic black with clear glass.
The covers are usually concrete, but covered with sheets of steel riveted to give the same tightness also easy drainage of water.

Church of the Three Crosses 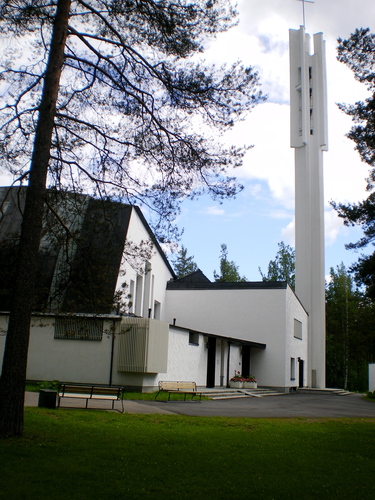 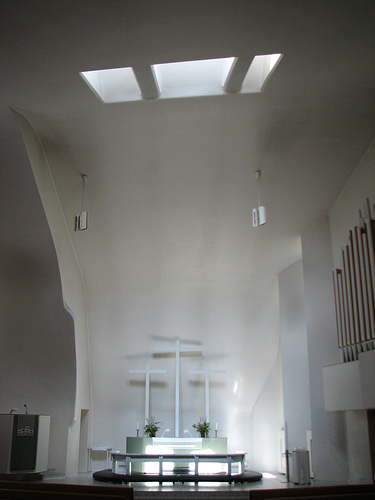 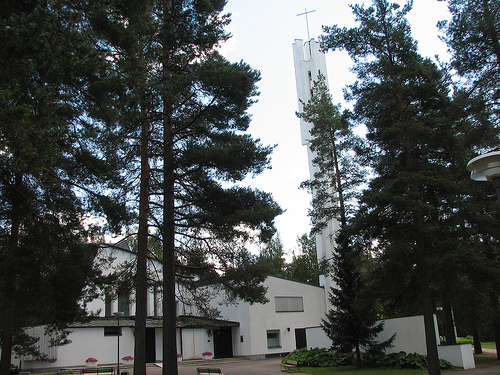 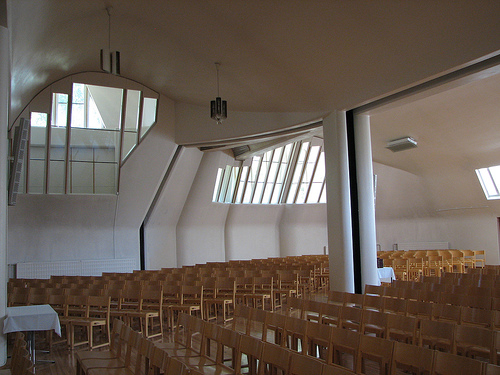 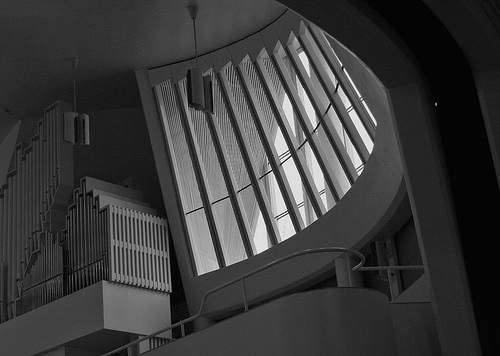