This work is one of the most representative within the set of buildings that I do Félix Candela, it is located within the membranes directional poly concrete. This was a laboratory for exploration of spatial possibilities offered by the geometry as used by Candela called “Hypar.”

Again Felix Candela partnered with two other architects, Arturo Sanz de la Calzada and Pedro Fernandez Miret, to carry out this project in 1953 and 1955. It was developed on a site located in a corner of a rectangular shape with the north-south axis within a residential neighborhood in Mexico City, with a floor of 31 x 53 meters.

As for the engineering and construction work, the company participated Wing Covers. The design of the windows of the church was given by José Luis Benllure, renowned architect of Mexico City.

Félix Candela used the inverted umbrella, which, as foundation blocks, provided a very economical solution to the frequent problem of foundations in soils of low load as in the case of the colony Narvarte. Exaggerating the arrow up or umbrellas, symmetrized and performing other simple manipulations of the “hypars” got this spectacular structure warped shapes. Thus arose the church of Our Lady Miraculous Medal, which caused much impact.

The result is an interior space absolutely unprecedented, something that had not been seen before. It is a high expressionist space due to the torsion of the forms and the many gray areas generated from what appear to flat surfaces. This marks a difference from American Baroque spaces whose intensity derives from the bumps of the forms and reflections together in chiaroscuro.

The building has a warehouse of hypars 20 meters high and another of 8.50 m where the chapels are high and the choir. To access the main hall can be done near the altar and there is also a hall which can be accessed on the main facade of the nave is divided circulations so that it can enter the big ship and small.

In the big ship are held religious meetings, where there are some wooden benches where the faithful are located in the back of the nave is the altar, and one of the doors to the outside. In the small ship can see the chapels, also has major services of the church and the choir. The whole plant is uprooted on one level except the altar has two steps.

The facades are slightly recessed to prevent aligned with the neighboring buildings, creating an atrium of access; the eastern side of the building begins with a secondary vessel to a chapel above and west church opens two rows of four columns twisted. There is an exaltation of the presbytery by the elevation of the structure and the change in the light.

As described, the church is made up of “hypars” joining and result in this space devoted to religion. The geometric shapes perch on the site by columns or posts that are a foundation based on isolated footings and footings on the contour of the building from where the uprooted red brick walls annealing. The brick walls were used to support the hypars on their sides to form the roof slab.

During the construction process, an important moment that would lead to the continuation of the project would be the descimbra of the structure. Such a circumstance would mean turning in the works of Candela, since this is when the concrete structure fit, it is organized and supported by itself allowing his weight to settle. Thus Candela confirmed in this church the validity of their geometry.

Juan Antonio Tonda work in this work as a structural partner Candela. This was mentioned that there are 21 different models of hypars that make up the main aisle, such was the pressure from the ranks of the side hypar vertically in the union of the two rows had to apply a coating weight dead. Nevertheless the effect is still lifting, always having the feeling of weightlessness. The geometry of double curvature had invested the sense of the forces without endangering the stability of the constructed.

Throughout the work Félix Candela uses the techniques of reinforced concrete, so some other details like the bell tower, the cross that crowns the main facade of the church, some benches and shelf, and the stairs spiral lead to the choir, were made from this material could only Candela shape their own way.

The side walls of the church were made of red brick annealing, in terms of furniture, this was done in red cedar and some doors and details.

As for trim, most were made of iron, both outside the gate, like the interior allows the total input to the church. The floors were made of marble with gray streaks 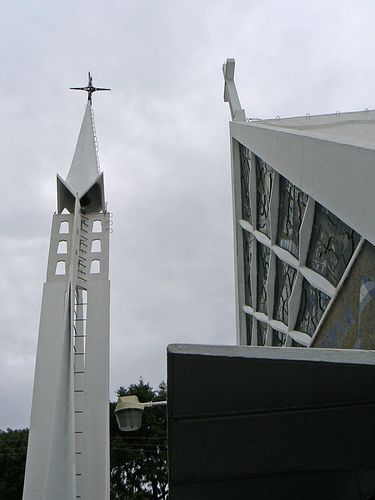 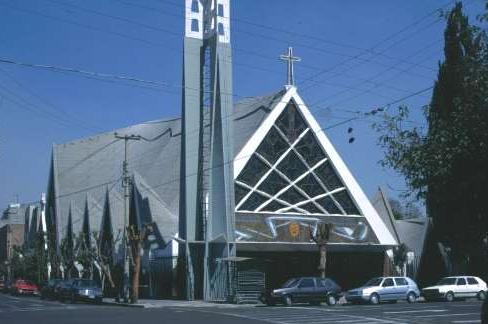 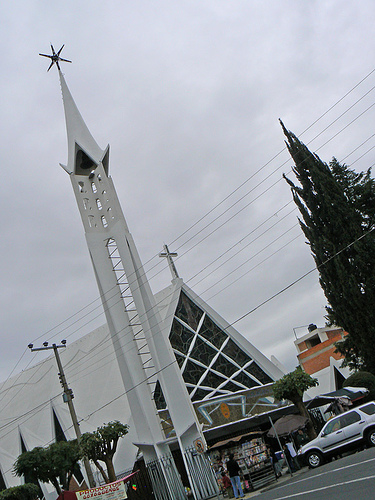 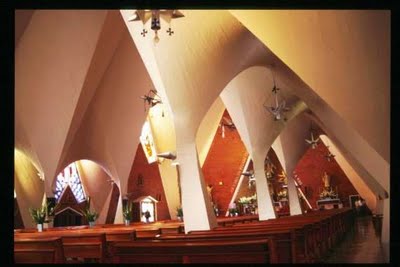 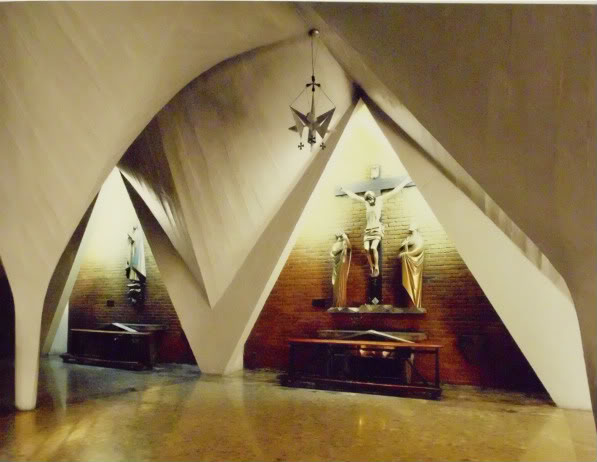 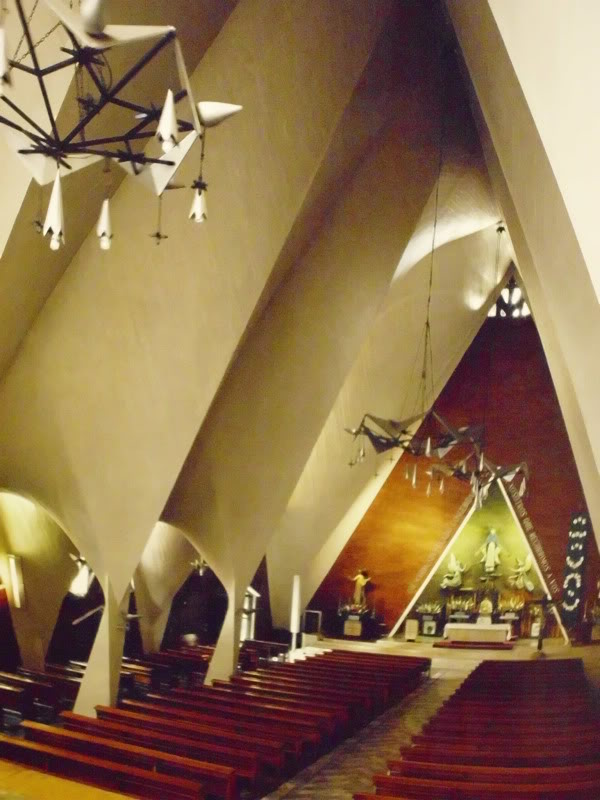 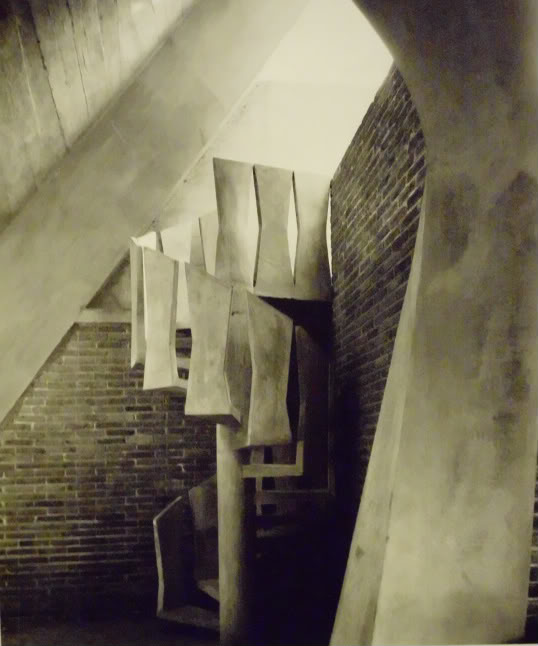 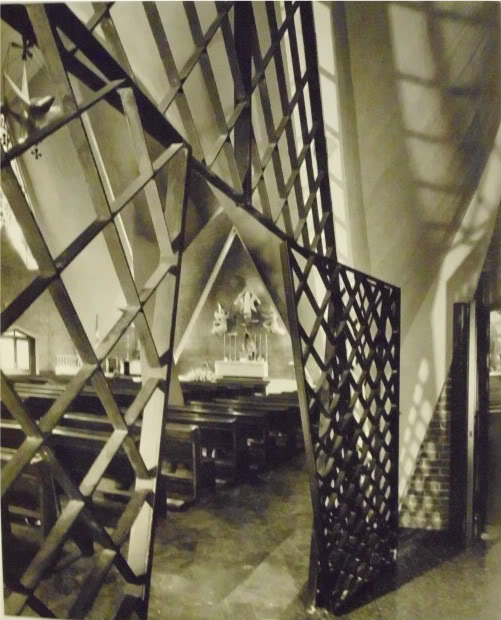 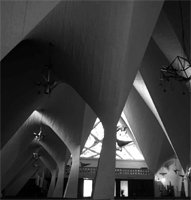 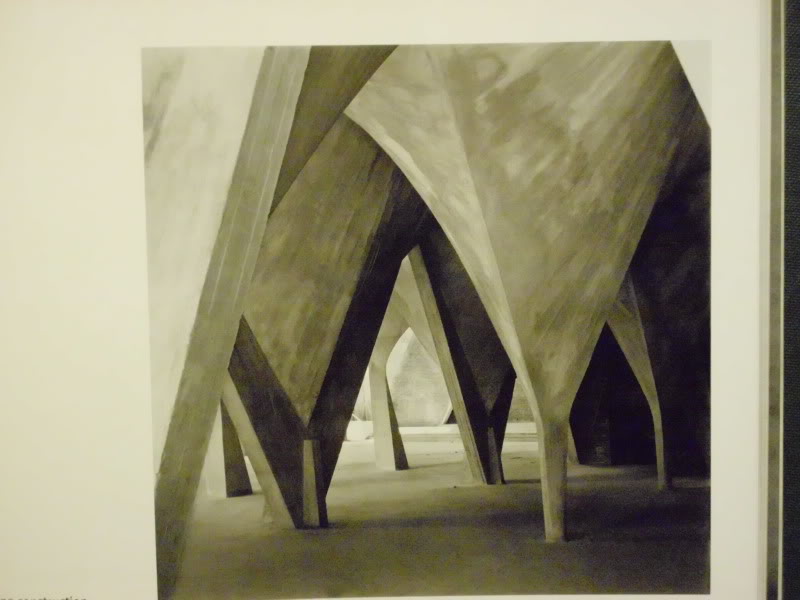 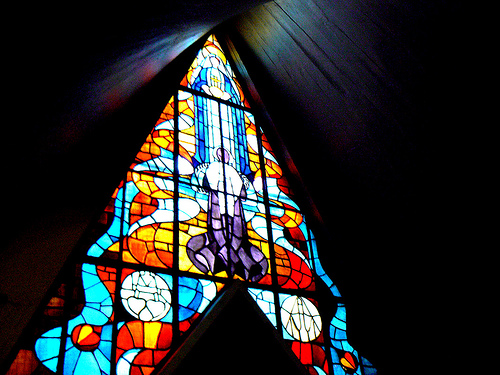 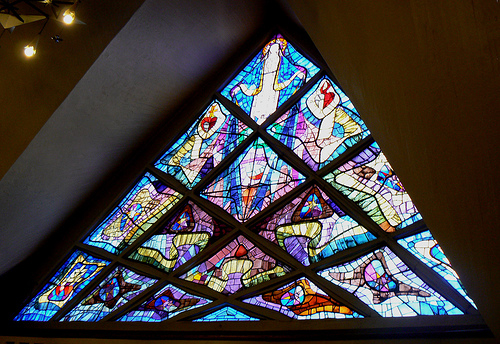