The high-tech British, which flourished mainly in the 1980s, was an honest style, more interested in the flexibility of spatial organization than the fixed, and rejected the use of natural materials such as wood and brick for the benefits of screwed metal or glass elements.

Not surprisingly, the style produced few residential houses as the primary use was almost always for larger projects such as skyscrapers, museums or office buildings.

Norman Foster was a major proponent of the high-tech style, but when the design was commissioned for a house for a wealthy Japanese businessman, Foster returned to the more classic style of Mies van der Rohe, taking as an inspiration the best-known works of the German master, and probably also one of the most significant in the history of modern architecture, the Farnsworth House.

The Farnsworth House was the starting point, however Foster learned to create an interesting interpretation with less theoretical elements and more useful to the life that it should develop.

The house is located on the eastern side of the Izu peninsula, about 135 km from Tokyo.

The high-tech British, which flourished mainly in the 1980s, was an honest style, more interested in the flexibility of spatial organization than the fixed, and rejected the use of natural materials such as wood and brick for the benefits of screwed metal or glass elements. Not surprisingly, it produced few residential houses, but we can highlight a couple of interesting examples, such as the Hopkins House. Norman Foster was a major proponent of the high-tech style, but when he was commissioned to design the house for a wealthy Japanese businessman, Foster returned to the more classic style of Mies van der Rohe. And behind Mies, of course, was the source of constant inspiration for modern architects of all kinds: the traditional Japanese house.

The first and perhaps most sensible decision for the project was the choice of site by the customer at the top of a cliff on the eastern side of the Izu peninsula, about 135 km from Tokyo, with spectacular views of the sea framed between pine trees. But this is not a house hanging from a cliff. Its relationship with the land is mediated by an artificial landscape designed by Shigemi Komatsu. Some concrete containment walls, rough yet gentle, in the way of Louis Kahn and Tadao Ando, divided the land into concrete terraces paved with red volcanic gravel. Three ancient stone lanterns and an exquisite tea house style of the late Edo period convert the terraces in an austere garden. However, the geometry is inexorably straight. Four stretches of stairs, straight and aligned, down from the driveway outside to the perfectly rectangular platform where the house sits.

The less obvious characteristics are the aluminum boxes that are placed on the terraces and seem to be connected to the main volume, an example that Foster did not totally abandon the high-tech style. These pseudofabricated modules contain the bathrooms, kitchen, air conditioning machinery and warehouse space.

The strategy of separating the spaces so drastically into “served and servers” stops completely any idea of free interior space. Some corridor walls divide one space into two simpler spaces, almost arbitrarily, like the living room, foyer, dining room and bedroom.

Guests stay at a smaller version of the house, off of a third corridor, located on adjacent land.

This is the aspect in which we find clear echoes of the Farnsworth House of Mies van der Rohe: one floor, flat deck, light steel structure painted in white, raised about one meter off the ground, with a platform put in between.

Although the influence is obvious, there are also important differences. For example, the pillars of the structure are rounded, rather H profiles, and the overhang of the deck is supported laterally, rather than on the ends. The beams of the deck are tapered, which, besides being structurally expressive, gives them a vague Japanese air, but the wooden terrace is very thick and its support structure is not visible.

The glass facades are for the most part, but all the leaves are on tracks and able to slide, as shoji panels, and a narrow strip of high windows runs around the building. 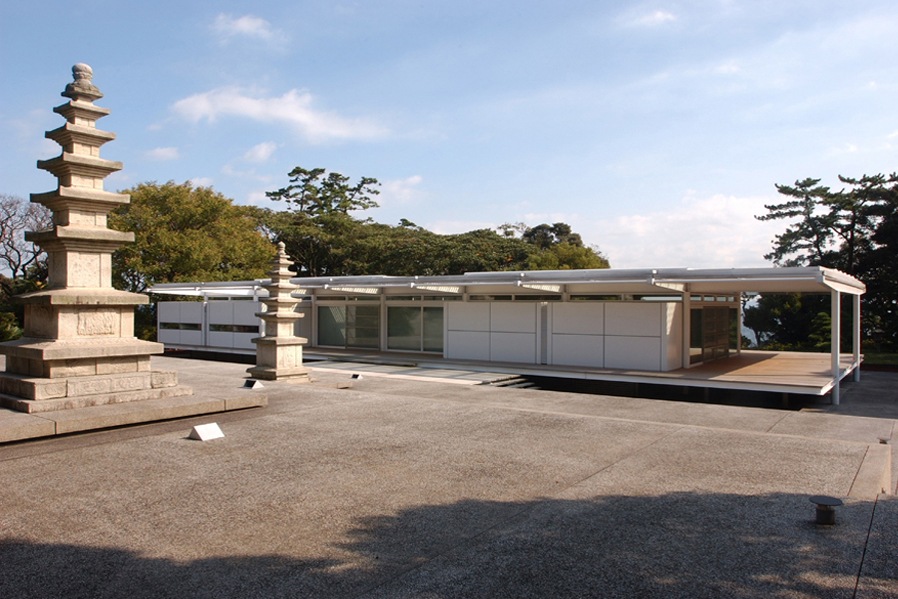 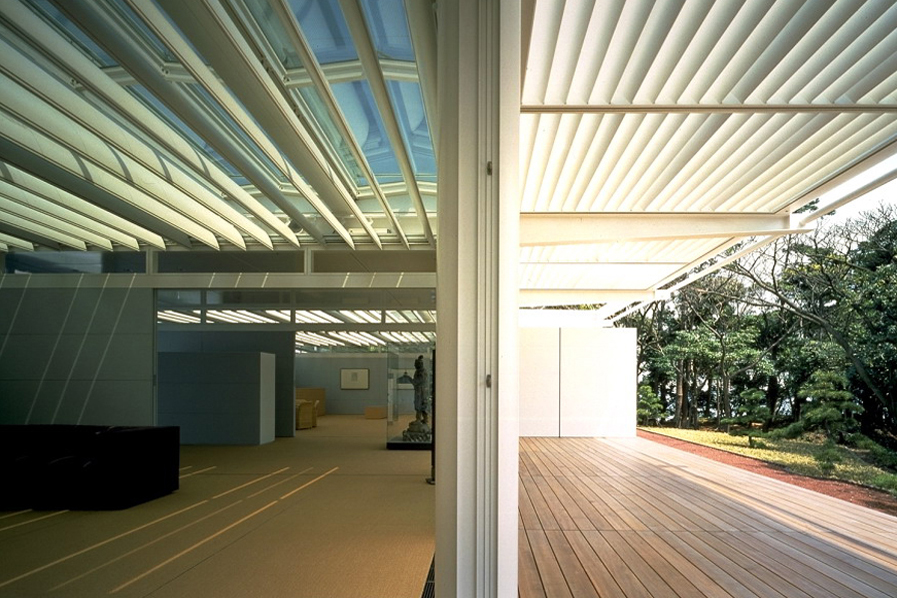 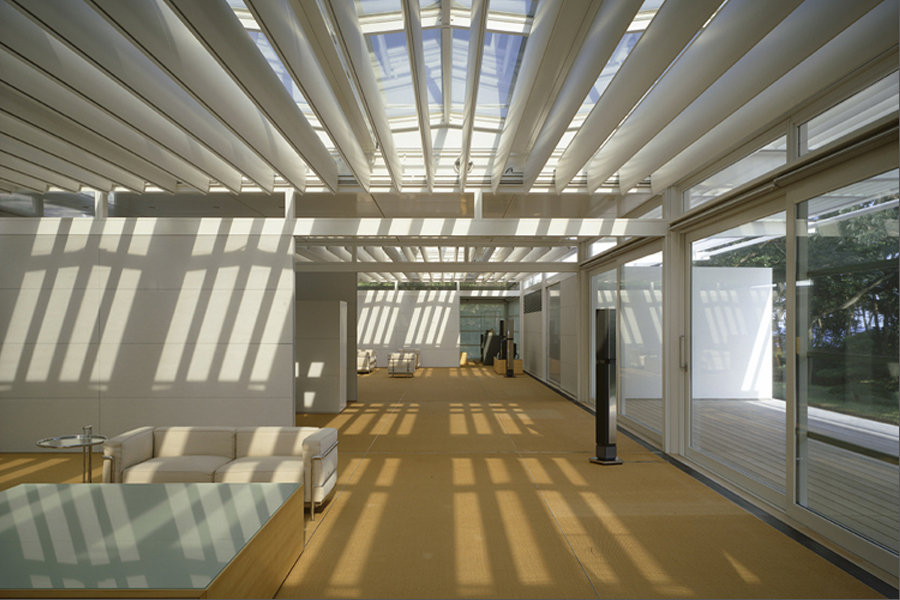 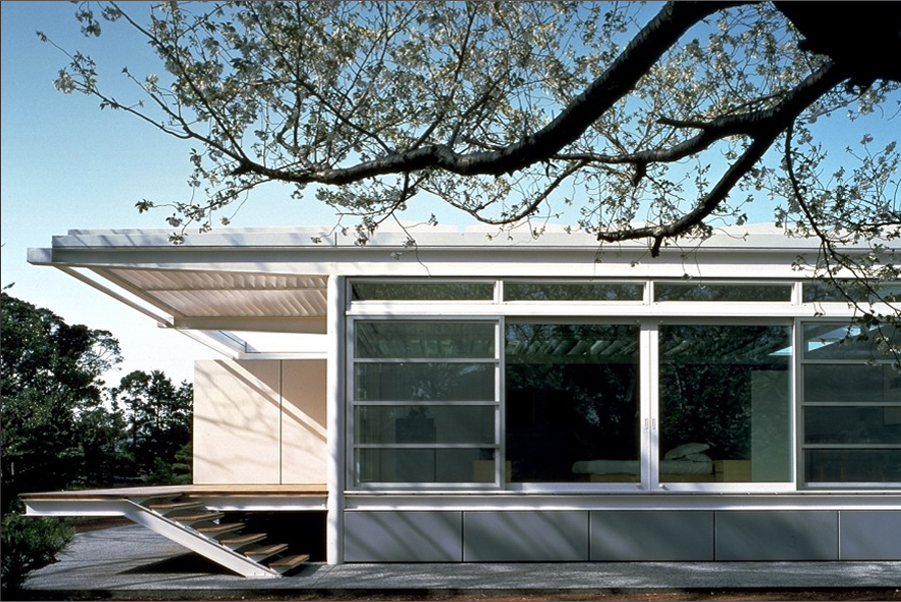 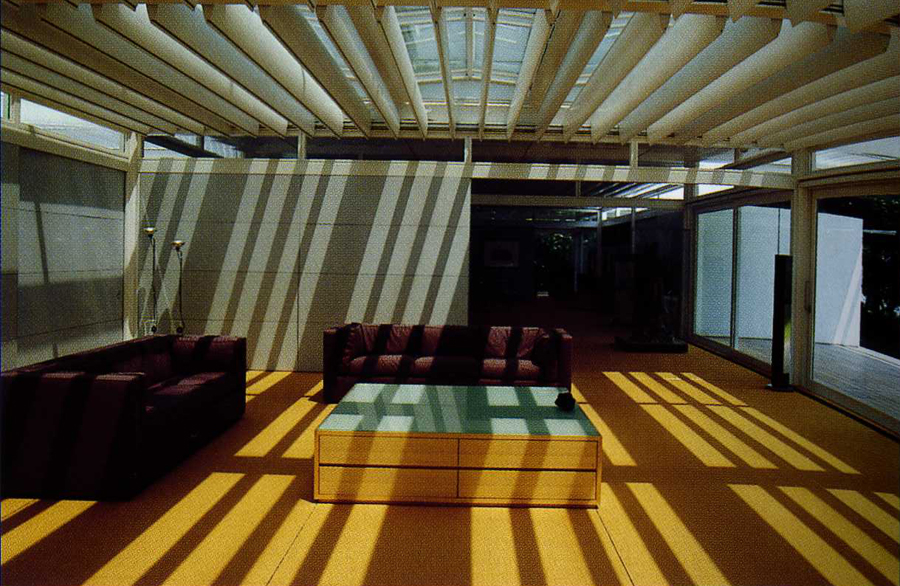