The principals, a couple with two teenage children, we were promised in 2004 when they discovered our first work in the Blue Sea went to buy a lot for us to do them a house of the same characteristics.
In 2008, define it and faithful to the promise we charge your home for the summer.
It was to have approximately 100 m2, be well integrated into the landscape and take advantage of spectacular views to the nearby forest.

Concept: Building in the woods

Propose alternatives that ensure the survival of natural environments

Mar Azul is a place we know for many years, which is why when in 2004 built the first work we knew we had to intervene in a territory that despite its beautiful scenery never had a legal support to protect the heritage of lotean voracity of those with only one goal: make as land rent.
Nor has a code, understanding the logic of this privileged environment, regulated by solving the mismatch between the improper subdivision and the possibility of building without losing the environmental quality of the site. This situation described is added as an aggravating the proliferation of a typology “typical house in a fantasy world, which is gradually” domesticating “the forest, still owner of a wild powerful presence.

Operate on that site then assume its misalignment meant as a challenge and see how far, the architects can make a contribution alternative.
The response was the proposal of a minimal architecture resources, both material and formal, not only as an aesthetic choice but as an ethical principle of recovery of a more rational use of the various resources available. This architecture should be incorporated into the landscape stripped willing to membership, seeking to integrate into the existing reality.For this to happen it is necessary “listening” to what the site communicates the first approaches should be free of prejudice regarding the it not only to capture data and therefore tangible and measurable qualifying, but that atmosphere that the place provides and that we can only understand if our eyes are free of preconceptions about it. This means to practice the exercise of “see first time. ”
Consider the data, letting those feelings overcome by providing the place and imagine himself as the capitalized project is essential to be able to fuse architecture and landscape.

We had practiced this year (almost as a professional service) Mar Azul vacationing on several occasions, so we evaluated the powerful presence of its forest landscape, the sensations that provide continual changes in time, but also had experienced the microclimate that provides : attenuation of the strong sea winds which occur beneath the trees, these provide constant shade from heat in summer while producing a very wet winter, which for us was crucial in making decisions to When planning, the fact that under the pine trees is reduced significantly the amount of light throughout the year.
We also knew that the forest does not require maintenance other than removing the dry vegetation, if not new species are introduced to break that harmony.

Making what the environment offers 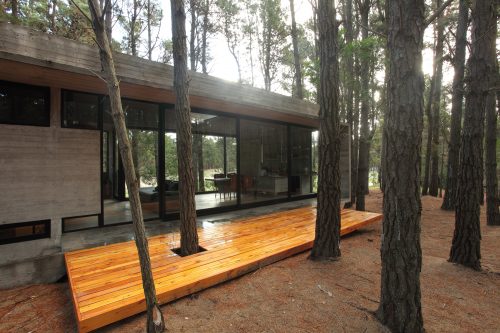 Recognizing this particular climate was a deciding factor (along with the low budget available and no maintenance of the house) of the aesthetic-constructive decisions that defined the work.
The need to capture the light led to conceive the first work as a “semi-covered” and then resolve it with large panes of glass from the inside make possible to view in all directions and from the outside reflect the landscape, the house blends with it.
The need to accelerate time to implementation of the work and avoid the after we decided to build with exposed concrete. The shadow prevailing on the other hand allowed us to use this material because it provides sufficient thermal protection from spring to late autumn.
Preparation for winter was not too important (although of course was intended) because its use is limited because of their status summer home.
The insulation waterproof concrete was resolved with a very compact and with a study of the shape of the enclosure for the evacuation of rainwater will take place very quickly.

The expressive quality of exposed concrete and its resistance and waterproof properties already mentioned, made superfluous any surface finish, achieving a low cost of implementation at the ends without the need for future maintenance.
On the other hand the color and texture of concrete formwork made with wooden planks was a forceful presence and mimetic at a time, allowing the work to be expressed in harmony with the landscape.
It’s short, an envelope of only two materials – concrete and glass – solves the integration with the landscape and responds to formal issues, structural, functional, terminations and maintenance.

With the same approach the resolution of the outdoor activities was the result of performing the operation on the lower atmosphere. It avoided all types of landscaping not only for the convenience of not keeping it to avoid leaving unnecessary limits expressed in a landscape that are not very built, or areas contrasting with the landscape characteristics of this privileged environment.
We like the strong homogeneity of coniferous forest only broken from time to time for some acacia and our pampas grasslands are also the dominant vegetation in the dunes near the sea.

The proposal that our study has been doing in the forest of Mar Azul, so worried in joining this environment that originates, and as far from the stereotypes of the place, has found great acceptance.
Several commissions of homes with the express request of repeating the same solution constructive and aesthetic value of the decisions on a more relaxed use of housing, lack of maintenance and construction.

This is certainly very gratifying for us but in turn we face a series of questions that become food for thought in each new order. Let them raised is one way to begin to tackle it.

We wonder: If the proposal is submitted to both functional environmental unit how to meet the design requirements, use and maintenance of principals, it is valid to seek a new solution without justification other than to try something different, betting only New?

If instead we choose to continue to bare concrete houses is it licit to produce changes in appearance such as by using a phenolic formwork, manipulating the surface termination with special finishes or use colored concrete? “All these procedures are not purely decorative maneuvers that go against the principles of austerity and simplicity that gave rise to the proposal?

”’Repeat this motion for materiality as a prototype re-worked with every order they belong to the landscape and the different way of living does not it seem logical and ethically correct?
“That would then be the challenge of each new project? “Focus on adapting this prototype to the specific uses of each client and the particularities of their environment? Insisting “increasingly force – assisted by the significance-that what is built there can not break with the unit representing the forest landscape? “Insisting on finding ways to transform every home” nest or burrow (1 )”?”’

With these questions we face Cher House.

The 20m x 30m ground on which we should intervene is at the edge of the urban forest of Mar Azul front of a large tract of similar landscape characteristics.
This area of dunes fixed by acacia and pine trees has not yet been loteado and principals that status was a highly valued property because it is now expected to remain so for a long time and they will enjoy a privileged view of a landscape without buildings that changed. The lot a little higher than adjoining land, at no very marked differences. Its surface is gently undulating and very forested.

They needed to have two bedrooms, two bathrooms, one en suite and a common place (with kitchen) as generous as possible.
We suggest that since the children were teenagers seemed logical to give them the ability to have separate bedrooms but could not increase the surface we put them narrow type cabin (bedroom we show images of these features).
The idea seemed acceptable when such space is not quite locked.

The particular highlight of the lot, the distant views to the undeveloped forest and the particularity of family composition, are the issues that are unique to this house with a constructive proposal aesthetic similar to the other built by the studio in Mar Azul.

Within an elementary volumes (a prism with its longest side parallel to the street) resolved an organization of media spaces to levels that make use of natural undulation of the land.
Thus, the bedrooms were designed on two floors and in this way provide greater independence between the activities of parents and adolescents.
Halfway between these places of rest was raised area of family reunification, glazed sides looking for the distant views over the nearby forest and the landscape’s own lot.
All areas in contact with the ground extend to the outside decks at different heights through interrelated with a ladder.

Access to the main floor of the house save a slope through a concrete staircase.
Once through the front door and from a small hall can be seen the two flights of stairs leading down half a level up, the master bedroom with attached bath and a half level down, a double height space in semi-buried the dune from which you access the general bathroom and bedroom cabins.
From these you can go to a semi-sunken courtyard also serves to expand the same, but above all it is used as a resource for indefinite closure of one of the sides and thus are also integrated into the landscape.
The entrance floor is a unique space with height differences and concrete walls are defined as places to eat and be cooking.

The property is developed in a concrete and glass prism that highlights the different levels is resolved. For that two large beams that run the longer sides will solve simple or inverted allowing different positions of the slab end.
In the area of the living room this is used to create the height difference sectorisations not only functional but also views of the treetops in the separation between slabs. H21 concrete was used with the addition of a fluidizing for this mix with little amount of water to set it very compact and does not require sealing.
The hollow brick interior walls are plastered and painted with white latex, floor cloths is divided by concrete screed plates of aluminum.
The meeting between walls and the floor was resolved with a recessed aluminum profile way socket. The openings are of dark bronze anodized aluminum.

The heating system, since there is no natural gas in the area, was resolved with a system that combines salamander, bottled gas stoves and electric heaters.

Except for the bed and the couches and chairs the rest of the equipment of this housing is fixed in concrete.
Even the beds in the bedroom cabins are resolved perforated cantilever slabs.