The Case Study House No. 10 was included in the program after it was designed and built by the team and his son Nomland Kemper Kemper Jr. Nomland
The house met many of the goals set by the program of the Arts & Architecture magazine, as the use of low cost materials, a modern aesthetic and a holistic approach simple construction.

The architects reflect the downline of the site with the slope of the roof line, giving the house a strong relationship with their environment. The huge glass walls and a heating system on the ground were the most notable features of this house. Interest was also paid by large openings to the outside, allowing a fluid design between indoor-outdoor spaces.

The house was designed for an area of ​​1500 square meters downhill, on the corner on the slopes of the mountains of San Rafael, San Rafael Ave at 711, Pasadena, Los Angeles, California, USA.

With a fall towards the back and a smaller one to the side of the street, the house is placed parallel to it on its front side. The medians are so diagonal side from the front and tend to converge in the back ground. All eucalyptus were respected, which automatically became part of the landscape and established how the rest of the garden.

Due to the slope of the hillside, the rooms of the house should be located strategically at various levels, allowing architects to use a simple cover for the whole house, parallel to the ground slope. Like most of the Case Study Houses, the project connects the interior with the exterior through large sliding glass doors, with little variety of materials in its construction.

The narrow entrance porch is hidden by the studio wall on one side and the back of the garage on the other, although the latter is cooled with window boxes. A pergola that follows the roofline covers the low level of the terrace and defines the entrance. The door is a single piece, with good design, recessed hinges and two fixed translucent glass panels that flank.

To the left of the study retracted and covered porch runs the rooms. The inward deflection of the sidewall of the study creates a corner that comes forward that protects the sliding windows of the rooms. 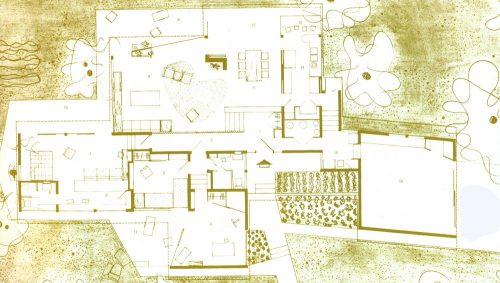 Inside the house was divided into three levels:

At this level, the closest to the street, are located the study and garage.

The study, which only has a masonry wall in front, receives abundant natural light through the glass panels from floor to ceiling on the wall flanking the entrance and sliding doors, glass also, on the opposite wall that open to the partially covered terrace.
This space achieves privacy by the angle of the front wall, the privileged status of a group of trees and the fall of the land.

The garage is accessed from the side street. A concrete front walkway that runs it joins the main promenade that leads to the house.
The rear wall of the garage, at an angle to the wall that limits the passage from the kitchen to the laundry, has a broad and deep storage space and work under windows overlooking the garden.

The inner gate is near the longitudinal center axis of movement. This house is designed for a family of adults, so that the arrangement of the rooms along a corridor is plausible and desirable.

On the right a narrow hallway leading to the garage and service area of ​​the house. On the left, becomes a gallery leading to the bedroom wing, the principal at the end of the hall and half a guest room with bath for both at the same level. The study, which communicates with the environment is a little higher.

The master bedroom is down the hall, to the left of the main entrance. This environment has a large corner used as a living room and a large dressing room that faces the bathroom, both towards the street frontage which receive light. A wardrobe separates this dressing over the rest of the room.

All this is an intermediate zone separated from the living room by a glass wall and steps. 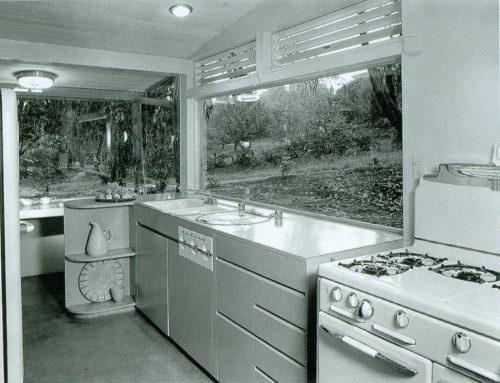 At the lowest level of the slope stood kitchen and lounge area.

The duo of architects had in mind to incorporate the surrounding landscape into the living area – dining, surrounding large windows, large window on the side wall and a fixed glass roof is moved into creating an angle to the side wall of the terrace rear deck angle that is highlighted by an indoor-outdoor planter beside which his located a door connecting the living room with the terrace. Sliding doors from floor to ceiling in the rest of the front that looks to nature. The open fireplace, placed on one side, the only interruption in the complete opening of the face of the house.

The rear overhang extends many feet above the dining terrace and large windows can slide up behind the chimney, providing flexibility in the dining room that you can use the covered terrace.

Accessibility to the kitchen is practically expected. The separation between the main entrance and the dining area is done through a storage wall continues into the kitchen and serves as a storage room and closet, well adapted to house equipment in this part of the house.
The kitchen is of the gallery, with fires and under-cabinet refrigerator in storage height. The sink, equipped with electric dishwasher, beneath the large window facing the side street. It also has movable furniture that can increase the work surface if necessary.

Three sides are enclosed with large windows flush with countertops or furniture. A door leads to a small laundry room that opens to the main axis of the housing. Close to this point is the boiler room.

Frameworks wood resting on a concrete slab, adapted to the contours and soil movements. The floor slab is continuous from the interior to the terrace. 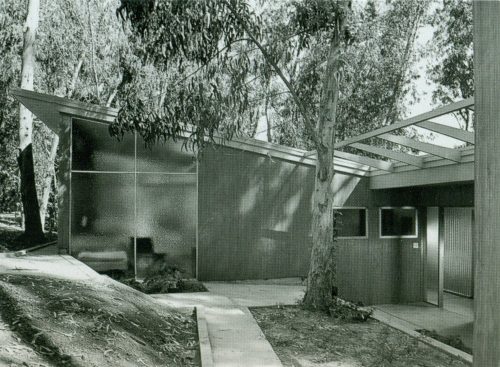 Industrial materials such as plywood and corrugated wire glass were used in the construction of walls and windows, as it separates the bedroom area from the living room, made of corrugated translucent glass.

Most of the interior panels of plywood are birch and mahogany, some of which are used for storage cupboards.
The entire ceiling is made of Douglas Fir 1×4 lumber, finishing with a layer of white pine natural.

On one side of the room stood an open fireplace with brick on view and a strip of concrete.

The sliding glass doors are framed by bands or aluminum tubular sections. Most of the windows are transparent, translucent but a few. The use of translucent glass responds to demand the feeling of openness and light without sacrificing privacy.
Indirect lighting, supplemented by some direct points of light are used in all rooms.