With the aim of “placing” the city of Busan on the world map the Korean government decided in 2005 to organize an international competition to design the new headquarters of the Busan International Film Festival (BIFF). The project’s goal was twofold, and that should serve both to become an icon of the city as to bring the BIFF among the 3 most important film festivals in the world attracting an important branch of revenue for the city. The contest was won by the Austrian study Coop Himmelb(l)au, led by Worl D. Prix.

In 2008 work began on the building that was opened three years later, on September 29, 2011, during the sixteenth edition of the festival.

The complex is located in the neighborhood of U-Dong. 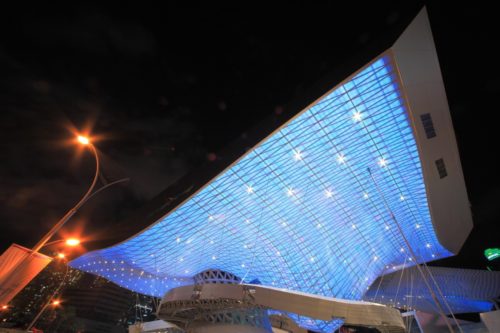 Working always with the aim of providing the city of Busan with a piece of iconic architecture that would go around the world like he did in his day the Guggenheim Museum Bilbao, the study Coop Himmelb(l)au design opted for a risky, so risky that not only capture the attention of all the criticism for their aesthetic beauty, but also go into the Guinness Book of Records for having the world’s largest cantilever to date.

As a whole the complex aims to redefine the traditional relationship between public spaces, private, culture and technology, making them all live in harmony not as separate elements but as part of a complete project.

Visitors can move from a closed to an open space without realizing it, sometimes develop the same activity. As in a conventional museum happen to a room above the Busan Cinema Center tours are blurred and merge with the city, the idea of ​​blurring boundaries between public and private, between when the show begins and ends.

For its part the underside of the large overhang that covers the public square was designed as a rolling cloud that breaks the straight lines instead of the city and transform the building itself on canvas on which to project their content. A work by the changing nature of art will not be the same way twice. 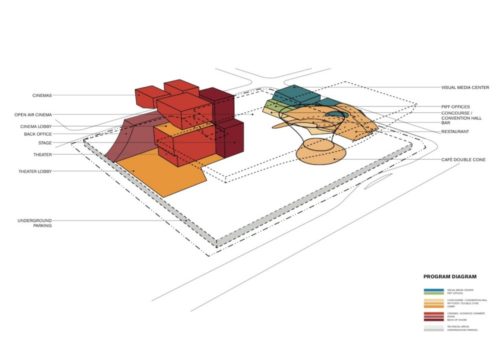 The complex has 10 apartments in total, 9 above ground plus a basement. A total of 55,000 square meters built a house a series of buildings with various functions.

The main building known as “Cinema Mountain,” a multipurpose entertainment center and three multiple theaters and the “BIFF Hill ‘with the Executive Office of BIFF and the’ Double Cone ‘.

On the ground floor is a cafe, while at higher levels there is a restaurant, bar and lounge overlooking the river. During the film festival, this space serves as a VIP entrance and can also be used as a setting for events related to it.

The Mountain Cinema (Film Mountain) is a multifunctional building, which contains a theater with seating for 1000 people, as well as three movie theaters. Two of them can seat 200 spectators each, while the third can fit 400. Theater tickets and movie theaters are independent.

The BIFF Hill (Loma del BIFF) was created with the functional needs of the festival in mind. Composed of a convention center, a visual arts center and offices for the organizers, on one side that leans the platform will serve to set the audience to attend open-air cinema. Thanks to the flexible organization can adapt to different uses to operate and be efficient in day to day operation.
The Double Cone, which is in turn the only column that supports the large roof that covers the square, housed inside the press center of the BIFF.

Outdoor functions are projected onto the east face of Mountain Cinema. The space in front of him, where the grandstand with a capacity of 4 000 people, is called Valley Urban (Urban Valley). Everything is provided for these events, and even is expected to be able to use the “backstage” of the theater, located there.

The structural solution designed for this project is based on a combination of concrete and steel.

The solid blocks of all leading to the interior spaces materialize in concrete reinforced with metal plates alternate ending with a fully glazed façade.

The large cantilevered roofs are uncoated steel in concrete, as this would increase the weight of the structure in excess can contribute virtually no tensile stresses to which each part is submitted.

To logara cover an area of ​​60×120 feet with a clearance of 85 (the world’s largest cantilever to date), we used a three-dimensional structure of steel beams that form a series of trusses connected to each other and in turn the pillar that supports them continuously.

The main materials used in the project are the concrete and steel structural elements and glass plates and stone veneer for exterior finishes.

The cantilevered deck has in turn with an installation-art LED’s bottom that allows the building to transform itself into a visual spectacle.