The Burton Barr Central Library is the central building of the Phoenix Public Library, iconic building and administrative headquarters of the entity of the city which has numerous locations. The name was chosen in honor of a local politician who worked hard to raise the funds needed for its construction.

The building with 26,000 square feet on five floors connected by an open glass with a glass and steel lift and a staircase known as “Crystal Canyon”, “Crystal Canyon” atrium was opened in 1995 and has with details ultramodern for its performance and in its construction and structure. Innovation abounds in this design: a structure of voltage suspended ceiling above the columns of the building and the side walls, sensors regularize a computerized system of blinds in the conservatory side of the building, reducing solar heat, the court of five-story building is topped by 22 skylights that follow the sun’s movement ensuring constant daylight. All this is complemented by a modular lighting system that efficiently regulates energy expenditure.

The Burton Barr Central Library is often cited as a model for environmentally responsible architecture. Once operational, the benefits of planning ahead and head to the harsh desert environment, contributed a result equivalent to one-third reduction in energy use initially planned by experts from the public and urban services, receiving the highest Power recognition refund granted by the Arizona Public Service.

Phoenix is ​​the capital and the state of Arizona’s largest city. Its metropolitan area, known as the “Valley of the Sun” is the 12th in land area, with a population of about 4.2 million people in 2010.

The library is physically oriented as a screen alignment to capture sunlight in the days of equinox.

The glass of the north façade is shaded with large white candles and the tunnel that forms the main entrance wall provides backlighting, while the other is decorated with Venetian plaster in blues, termination is applied on the walls of entire building with bright colors.

The five-story atrium, “The Crystal Canyon”, the hall has nine skylights on top, to track the sun, while the glass elevators and the grand staircase, are surrounded by a pool with black background which reflects.

The Great Reading Room on the fifth floor is covered by a “floating roof”, suspended by wires to a height of 9.75 meters. 0.15cm wide skylights run through all of the nearly 92 meters long that between the walls east-west while skylights covered with round lenses create the illusion of flames during midday summer solstice, 21 June.

The footprint of the library is based on square sections of 32′-8 orthogonal simple approach “, a derived measure the stack of library modules. These bays cover the central atrium space, which contains fully glass elevators and a large staircase rising from a reflecting pool in the ground plane. A monitor with nine stainless steel tracking skylights in the crown of the atrium bathes occupants with a lively play of light throughout the day.

The library program is divided into five levels, with the main usable space spread in a north-south axis. The main entry level has elements for operation of libraries, such as check-out posts and information. As it stands, there is opportunity to explore a rare book room, an entire floor dedicated to consulting and research resources, and on the top floor, the highest reading room in North America, which houses the collection of non fiction.

On the first floor of the library and new areas of the Best Teams, audio-visual, and the areas of foreign languages ​​or science fiction collections are located, also 900 meters dedicated to “Place for Kids” with salons stories. An auditorium and Accessibility Center with adapted computers, resources and materials.

On this floor is the Central Teen dedicated to teenagers area.

Most of the fifth floor is a large open reading space of approximately 4,000 m2.
Of all the floors, the top floor is the one that really engages the senses with the expansive roof structure and other carefully placed structural elements supplying the space with indirect light. Blue skylights above each column with tiny holes clear illuminate the tips of the columns in the solar noon on the summer solstice. The north and south ends are fully glazed, overlooking the city.

Outside the main building, the library has the @ Central Gallery, dedicated to traveling exhibitions.

In the north parking lot of the library were placed 42 Solar Panels, which in turn serve as a protective roof for 84 parking spaces in the shade 148.05KW able to provide power for the operation of the Library.

The building incorporates a structure of “Tensegrity” Buckminster Fuller in his roof and had motorized blinds on the south side to improve the solar control system that never worked properly and was disconnected over the years.

Tensegrity structural principle is based on the use of isolated components tablets are tensioned within a continuous network, such that the compression members (usually bars) do not touch each other and are connected only through traccionados components ( usually cables) that are spatially delimit said system.
The term Tensegrity from English Tensegrity is an architectural term coined by Buckminster Fuller as a contraction of “tensional integrity” (tensional integrity).

In order to mitigate the strong dependence of mechanical systems, strategies glazing and placement of the solid walls are tactical in orientation.

The east and west elevations are lined with corrugated and smooth copper panels with a vertical stainless steel band covering two functions: protection inside the low sun angles and thus eliminate the brutal concentration of solar heat that otherwise it would have generated in these places while allowing the placement of fixed building services such as stairs, service elevators, plumbing, mechanical, electrical and structural side systems. Thus the main interior spaces are completely dedicated to the service of proper uses of the library.

Focusing on light and glare, the design of the building were added on the north facade, sail awnings made by manufacturers sails for boats in the town of Maine, who despite his contribution twilight allow optimized view outside. These vertical membranes were made of Teflon.

When the sun goes down behind the horizon, curtain walls allow guess the interior, as its internal components are shown to the community. 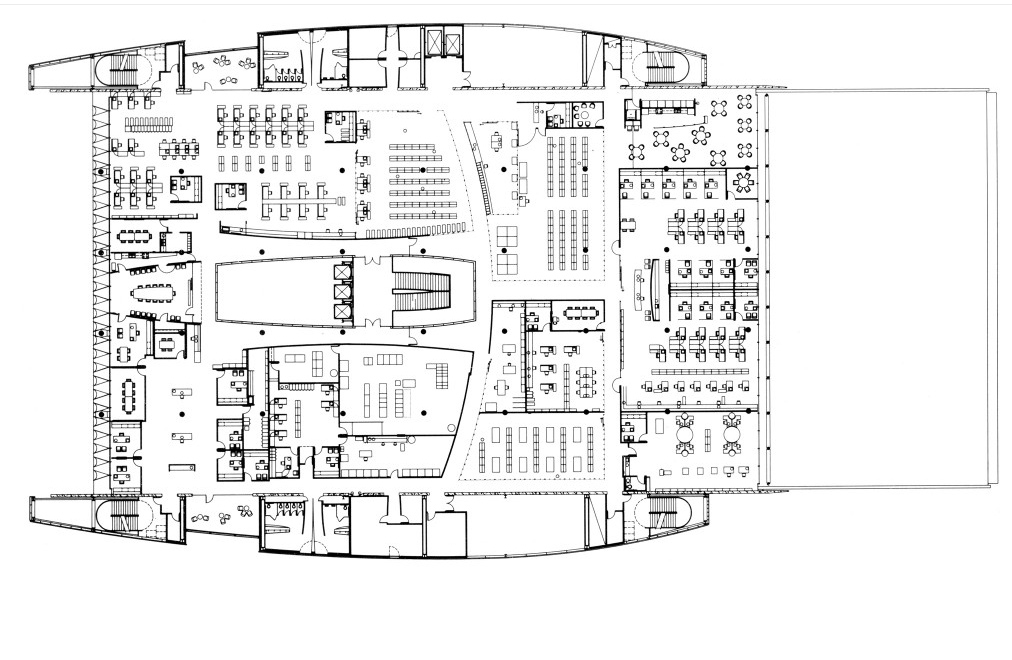 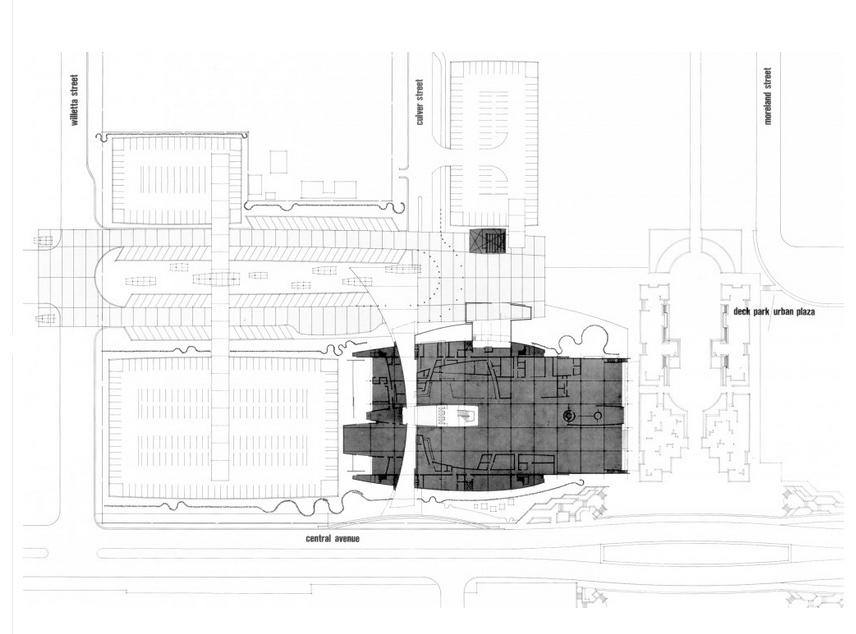 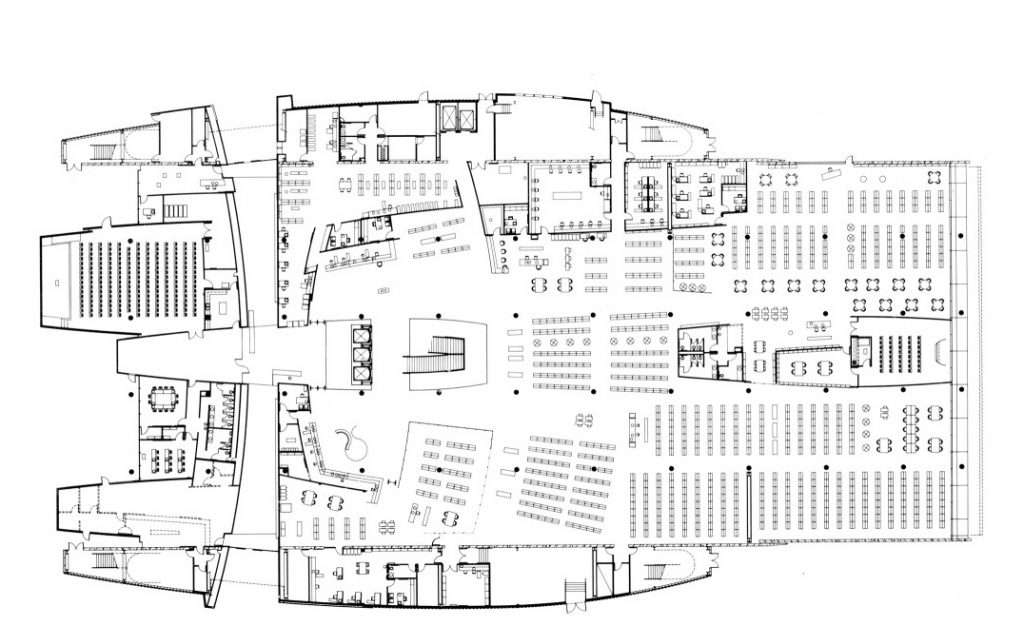 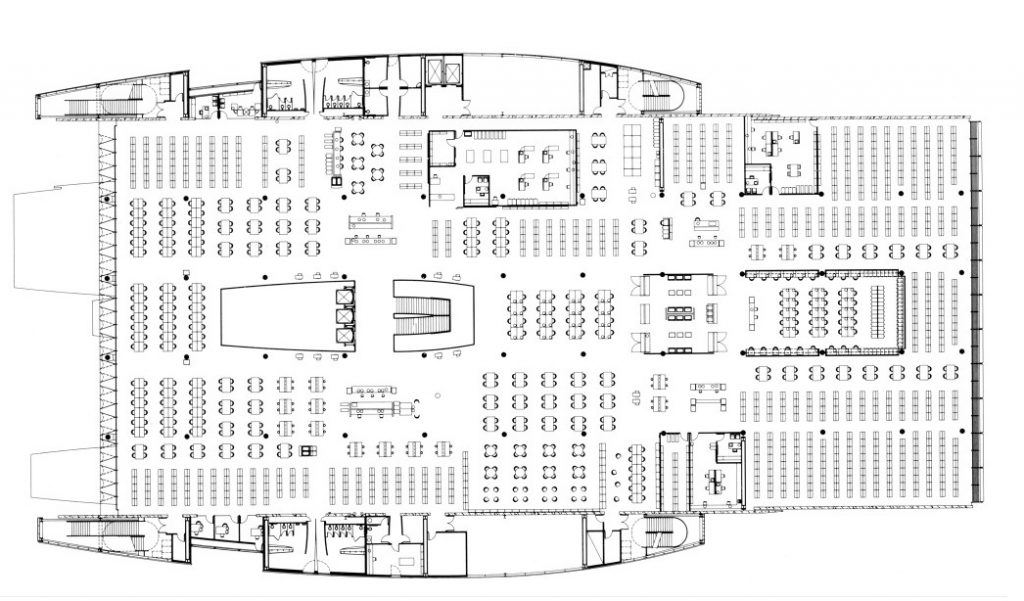 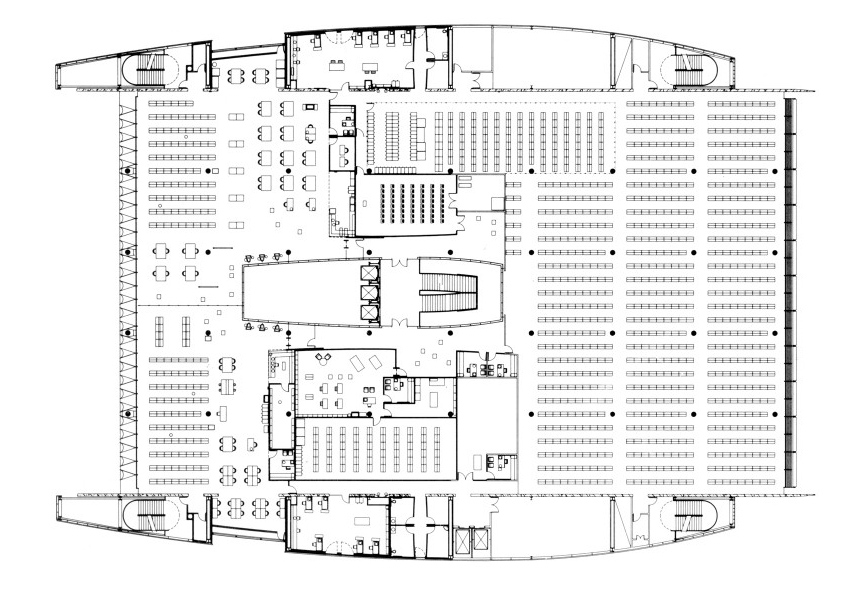 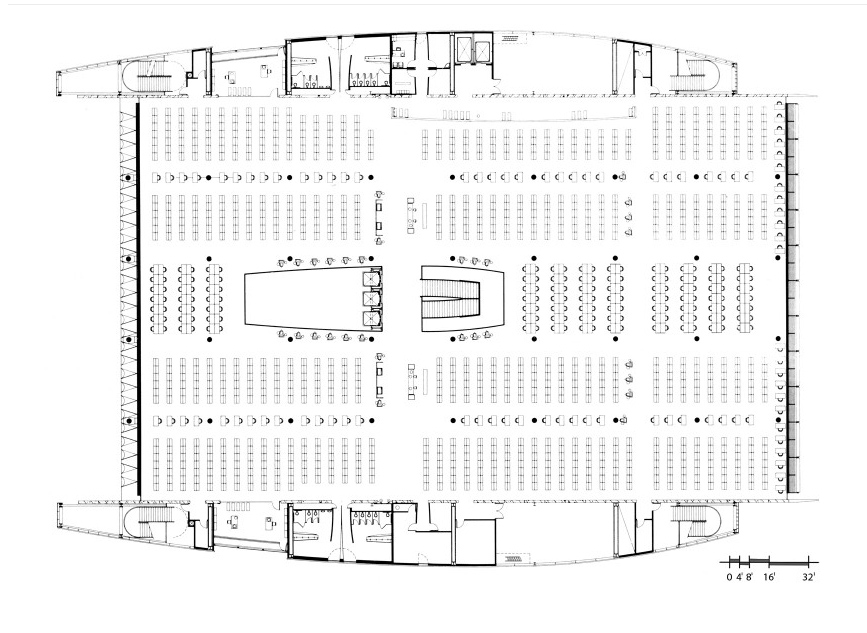 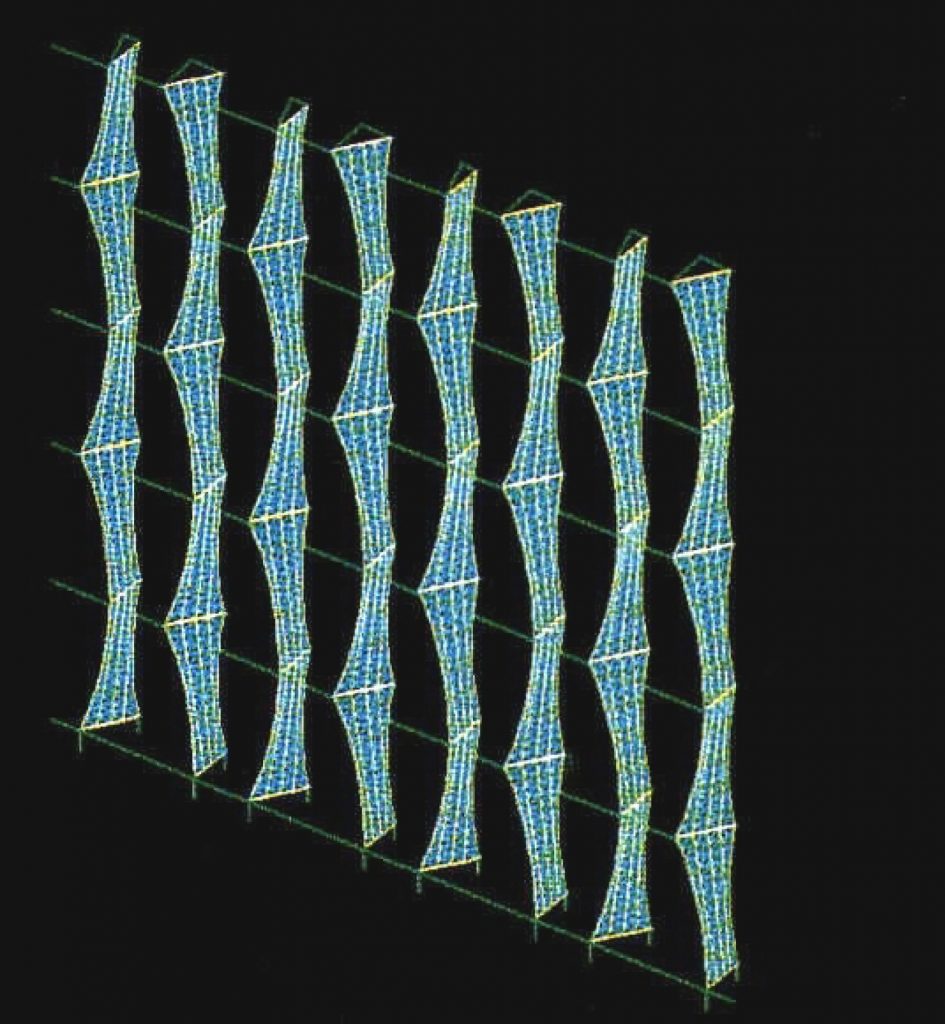 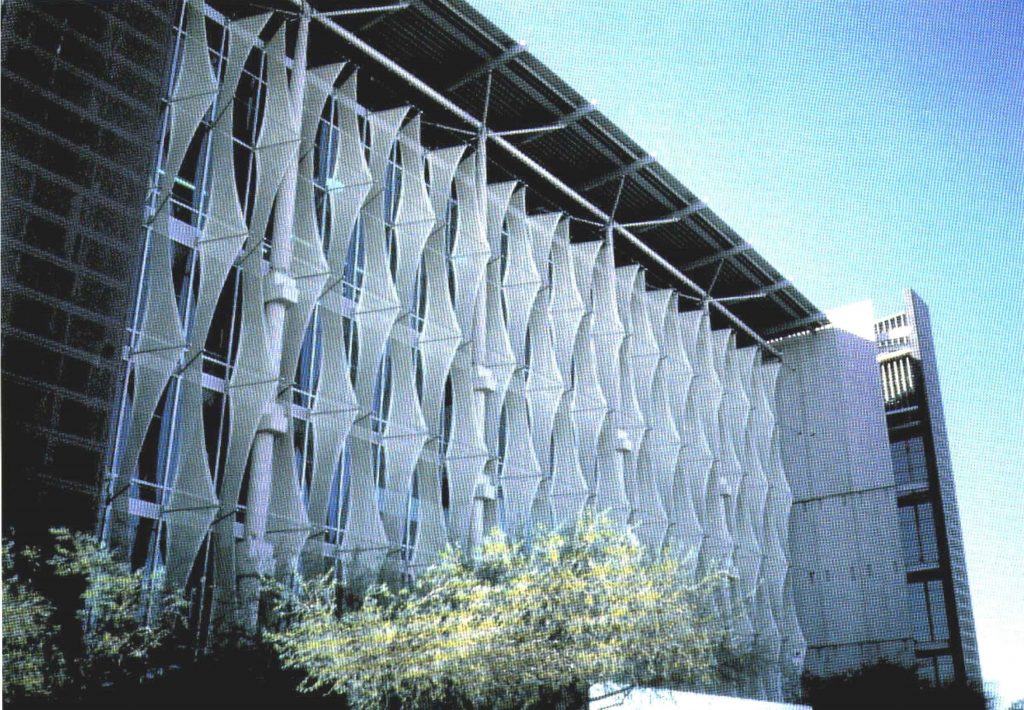 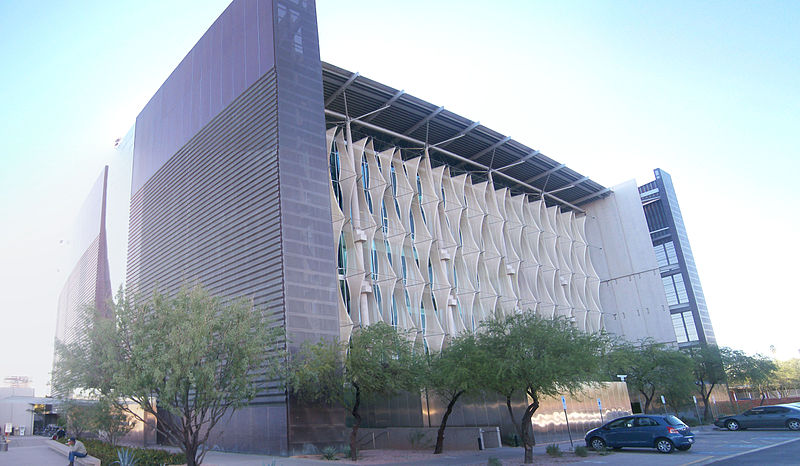 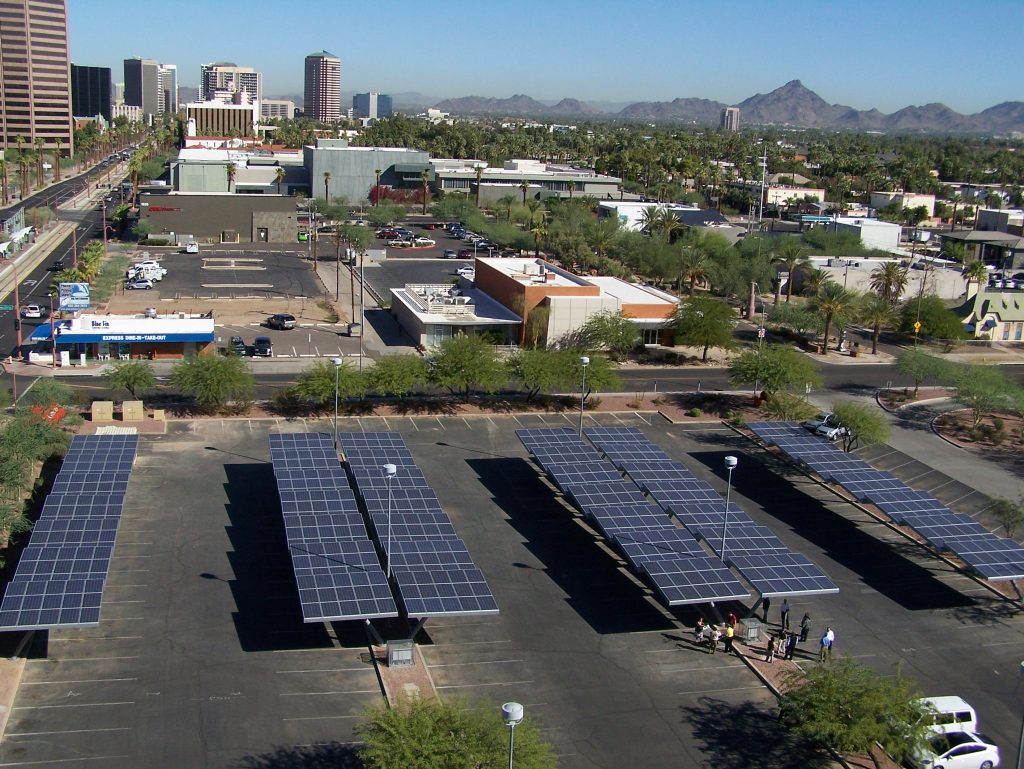 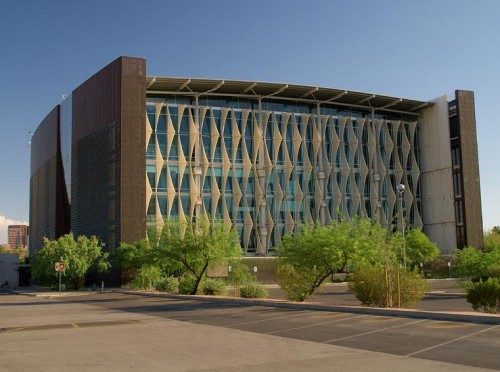 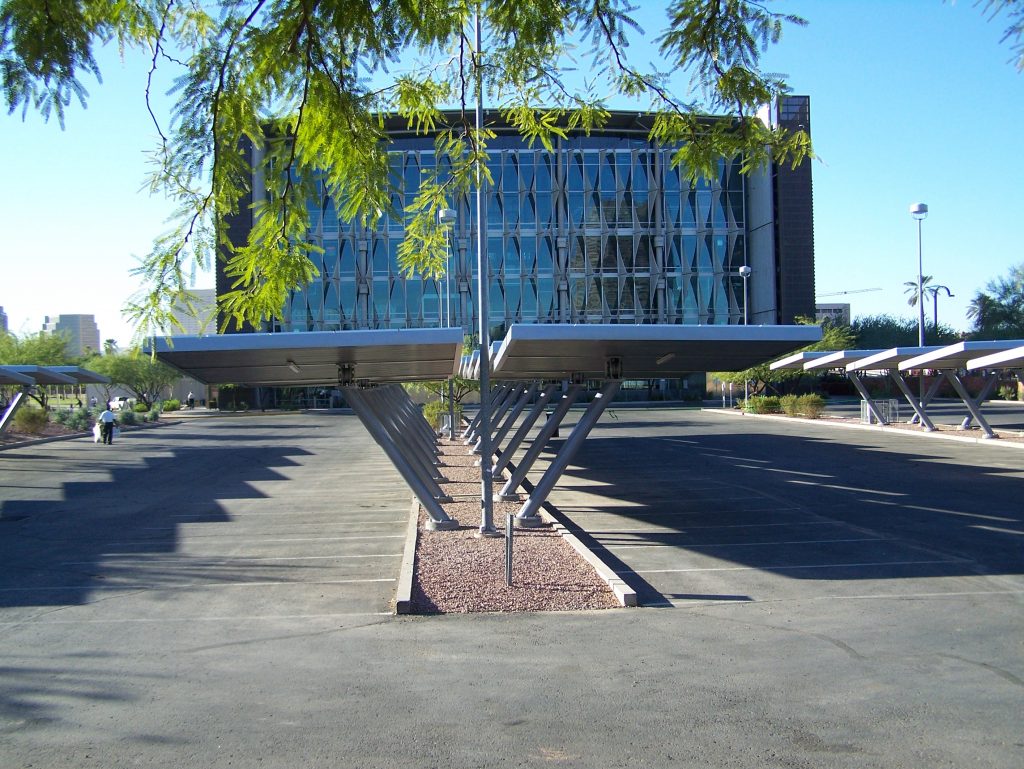 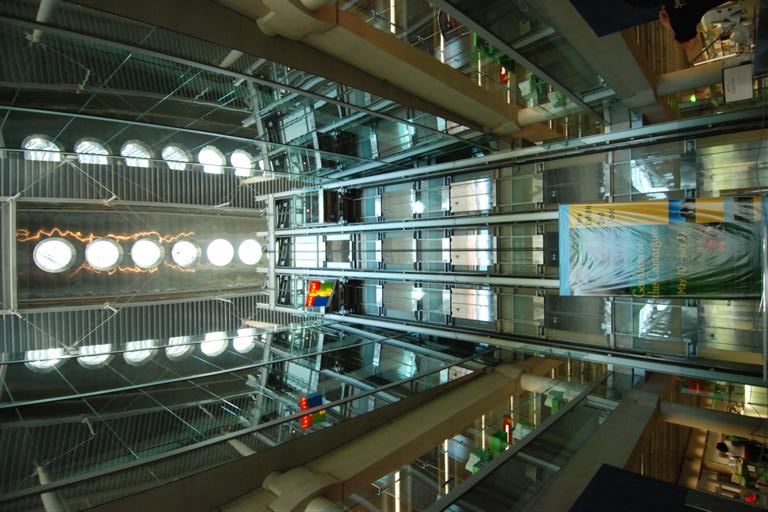 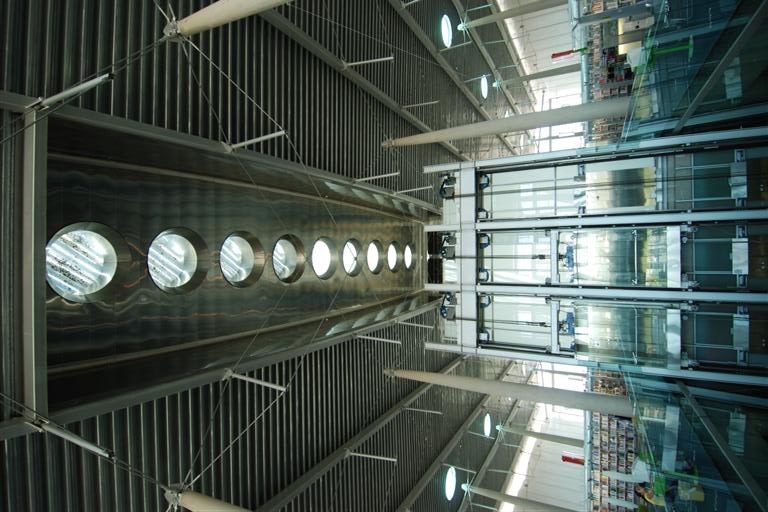 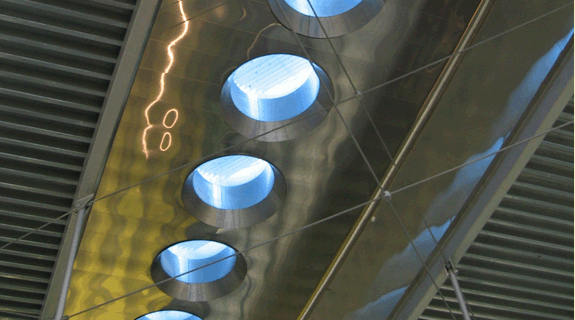 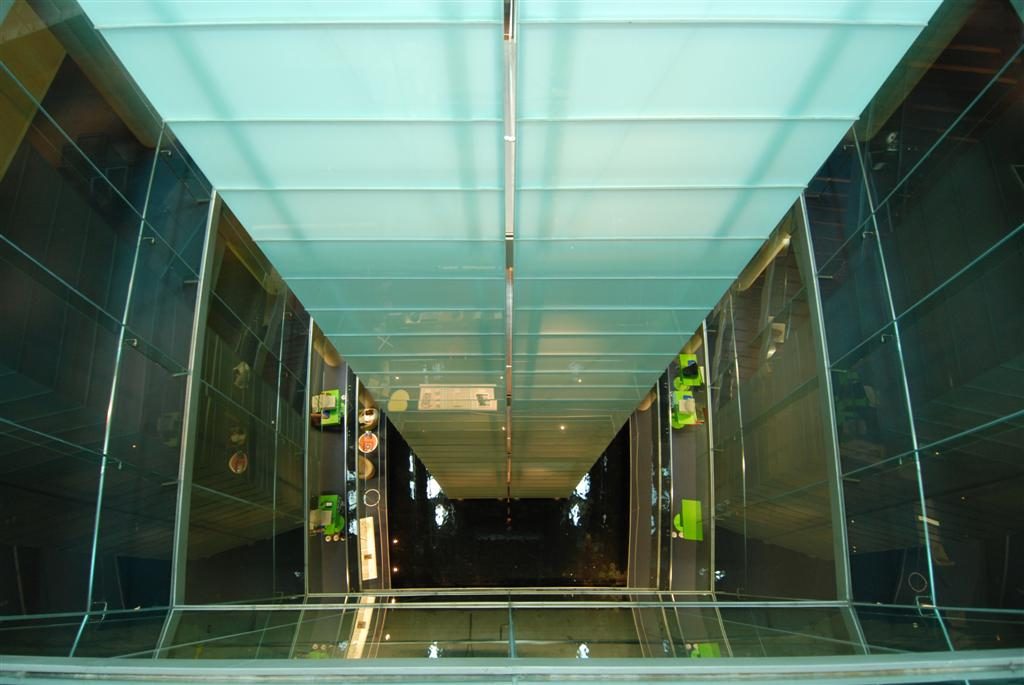 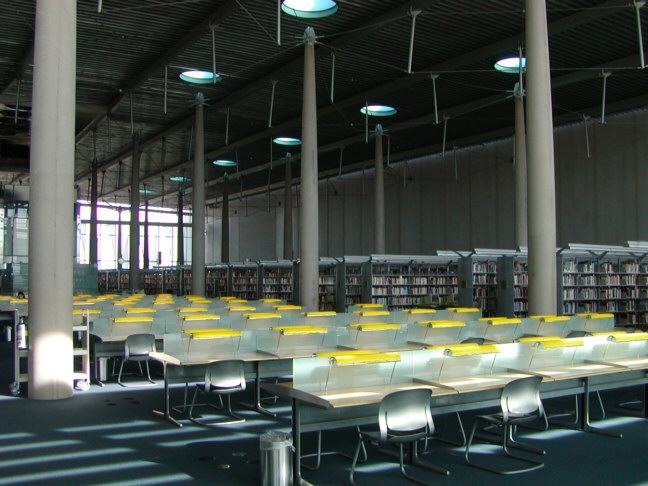 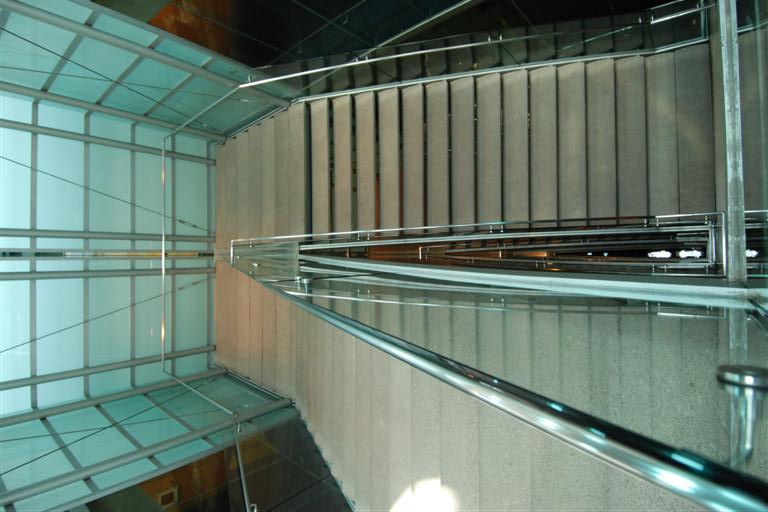 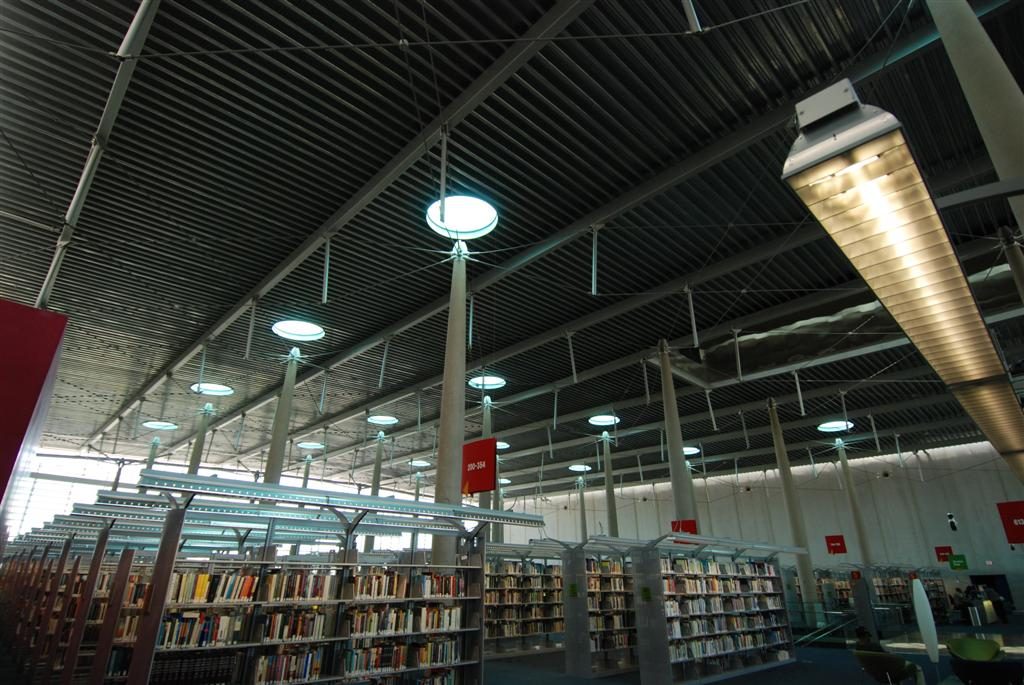 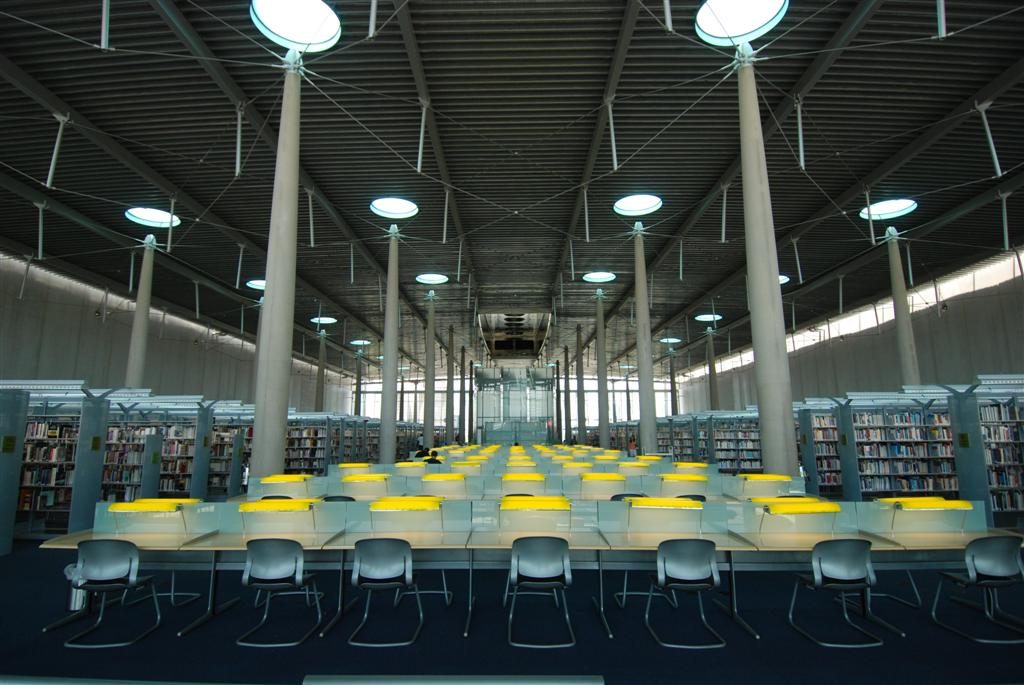 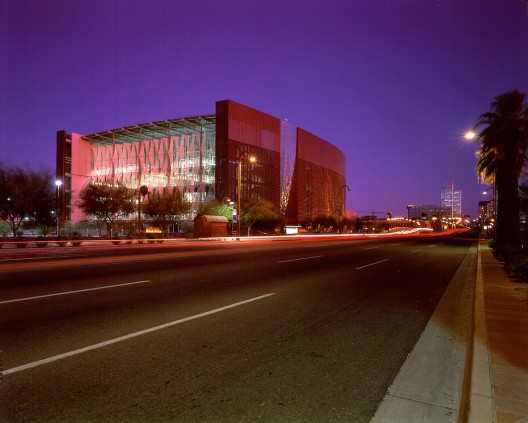 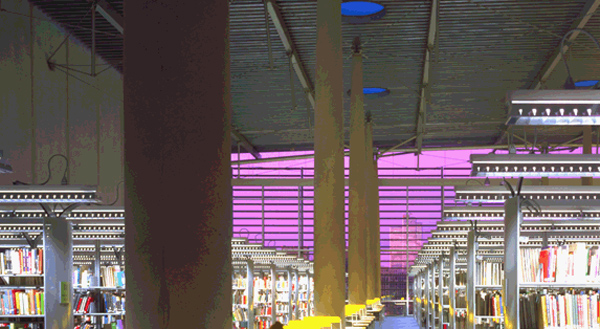 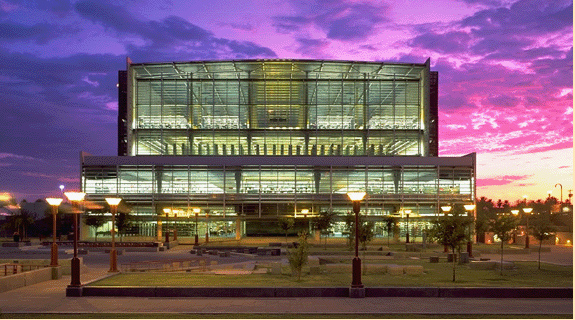 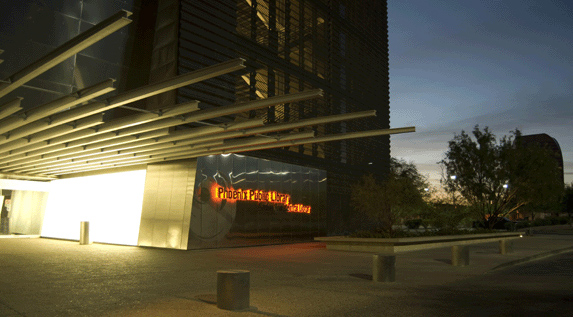