Building for Telefonica Mobiles in Toledo

The Call Center Center Facilities II of Toledo, Edificio Telefonica Moviles of Pich-Aguilera Arquitectos (Felipe Pich-Aguilera and Teresa Batlle) has been awarded by the jury unanimously to Sustainable Architecture Award 2006 by Nova Civitas Forum be a building originally focused on projecting a broad perspective of sustainability which includes a sociological component involved in the work space, intelligent use of materials in the design process and also use the latest technology bellwethers and bioclimatic. This project arose from a public call for the Administration of Castilla-La Mancha.

There has been a very unique building, using common technologies, contrasting, solvents and economic, without fanfare structural unnecessary, something that is very fashionable lately. The calculation has been made with a common tool of analysis with normal parameters. It has been dimensioned, without having to resort to complex methods and applications of structural design as often happens in projects with unnatural structural bravado.

The building was erected in the town of Santa Maria de Benquerencia, in the province of Toledo, Spain on behalf of the Ministry of Science and Technology of Castilla-La Mancha

The building has been designed so that they can make optimal use of energy conditions of the environment, solar radiation in winter and adequate ventilation for cooling during the year.

The center of the building is a large open space, covered by a system that channels all the climate like an atmosphere, not a deck is involved. Walkways, 5 feet wide and 17 meters long traverse all space and rely on some nuclei containing services and communications, space tries to give all the central volume plasticity and flexibility.

The program allows a basic structural and compelling solution that helps define the architectural space, formally influence on the concept of “tough space, defining a clear example of architecture generated through the structure, forming a” safe container “where assemble components manufactured by the industry.

The building consists of three fundamental areas, which have a different bioclimatic behavior and remarkable.

This area houses the rest area for operators.

It works like a large greenhouse which supports winter comfort in other spaces. This area is divided into a triple space with direct access to each of the working platforms

Because of its location and construction design, the south facade is an area where energy can make important contributions.

It is designed to let you make contributions or heat in winter when the indoor conditions are below the minimum of comfort. In these circumstances, the glass façade system is designed so that it can carry heat to the courts located in the north, along a two ventilation tubes placed in the top of the atrium.

Thus there is a balance in the thermal conditions of south and north. The return air from the north to the south glass facade is also carried through the tubes.

In summer the function of this glass curtain is to evacuate the heat from the ceiling.

This space contains the operator service.

The energy behavior of the central atrium depends mainly on the exploitation of the roof.

The roof over the courtyard is a powerful engine used to ventilate the building. It is designed as a complex element with a large amount of thermal radiation under translucent outer skin with fresh air in the middle.

All natural lighting contribution to this area is through two ceramic facades lattice, studied in conjunction with industry, on the one hand to control sunlight and provide sufficient natural light to work spaces and optimize their production by another and placement.

Thus there is a triple effect achieved by maintaining a very soft light transmission can create a pleasant semi-shade, avoiding the sensation of extreme heat in and provide adequate ventilation when the interior conditions warrant. 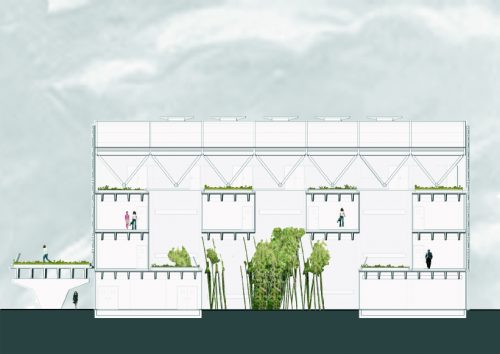 Locate offices, controls, training rooms and parallel services, it is a set of enclosed spaces and courtyards semicubierto

These yards, with a reduced energy intake because of its location, can act as a cool or heat regulator.

This part of the building has a neutral role in the winter, next to the reception of hot air from the south wall, have to be closed.

In summer, partially protected from solar radiation by solar panels, pipes placed as Brisse-soleil that contribute to the absorption refrigeration system and open when it is necessary to ventilate the building. This area north oriented courtyards with greenery acts as thermal controller providing freshness to all spaces at once that absorbs noise.

This vegetation is made possible through the cistern covered terraces. The roofs capture and store rainwater through the cantilever that arise beyond the structural frame and enclosure and serve as a hydroponic substrate for vegetation.

The structure is made by reinforced concrete elements: core-based three-dimensional solid concrete walls, making the whole structure more rigid and are used for vertical communication, complemented by large precast slabs, giving the whole a very strong perception structural elements to be solid, compact, and parallelepiped geometry. 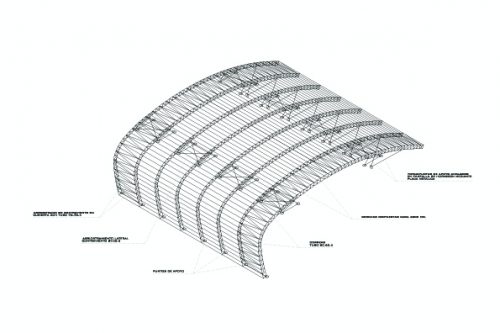 Complementary to the design of the walls, lies the roof structure, which makes the counterpoint to the concept above, this structure being the opposite of the previous wire, lightly curved in “airplane wing, light with a unique geometry and unusual in its concept, since aside from its role in housing integrates a particular HVAC system that sets up a self-regulating atmosphere differences between outside and inside the building.

The roof of curved profile, approximately equal to the airplane wing profile, is designed with a tubular lattice supported by six points, with a total depth of 78 cm., Giving a sensation of lightness. On the far left, at the beginning of the lattice and its lowest point, is subjected to some pillars of reinforced concrete-screen perfectly articulated by union, by means of bolts, for free abutments that complicate the implementation of it.

On top, there are four supports on concrete screens that make up the nuclei rigid vertical communication, with a maximum span of 15 mts., Well articulated, meaning that the structure can deform within allowable limits, freely depending on the wind variable actions.

Finally, at the right end, the structure has a great flight, which is saved by a strut comprises a cylindrical tubular steel profile of 200 x 8 mm., Well articulated, leaving at the end of a cantilever of 5.50 mts.

The lattice and their profiles have been designed taking into account their maximum deflection, when the reference profile most unfavorable to the suction of the wind when the vector of incidence on the building is parallel to the orientation of the lattice.

These follow a fixed modulation, and are separated every 4.8 meters., This being the length of webbing. Like these, for constructive reasons, should be separated from each 80 cm. that module is taken to form the lattice triangulations. The points where the structure rests on concrete have been stiffened by St. Andrew’s crosses.

For ease of construction and assembly, have been unified to the maximum tubular profiles of the structure.

In the two side facades designed a structure which transmits their reactions against the wind directly on the intermediate floors and roof. Coinciding with the modulated upwind vertical profiles are placed in the diagonal plane of the roof consisting of 70.70.4 mm tubular profiles.

The central support in concrete screens are designed as stiffening elements versus the horizontal wind.

Total charge of sucking wind, the more unfavorable because of its particular geometrical situation described, 250 Kg./m2

The verification of the static stability and elastic, the calculation of stresses and strains, and the determination of the sections efforts have been made by the general method of elastic theory, they accept as valid and the Navier’s hypothesis Bernoulli straight sections.

It is recognized that the structure is acceptable when subjected to the major actions by the weighting coefficients set by the legislation, like that most unfavorable combination, we find that the whole structure and each element separately is statically stable and that tensions to which is subject not exceed the elastic limit.

The group aims to prevent subsequent finishes showing the materials and industrial systems used so apparent in his own strength and plastic, concrete, glass and ceramic plates and others.

These support systems have a solar thermal panels for hot water production and controls that allow passive systems operate above the machinery of the traditional air conditioning systems.

The reasons for choosing hollow steel instead of conventional double T profiles have been:

Architectural aesthetics of the lattice more appropriate and consistent with the “concept” of the building and architecture project. Fewer lines, Enhancement of the prism (pipe, wall, tile, container).

Simplification of unions, having a large number of them in all the work, lowering the cost of labor.

Less weight, for purposes of mounting complexity, as they are large elements.

As the actions of the wind in this unique deck varies widely, almost all profiles can work back and forth both traction and compression, and more suitable in this case tubular profiles with respect to conventional twin-T.