In 2009 the governor of the province of Buenos Aires called national competition for the construction of a museum of contemporary art in Mar del Plata, that by design and content enrich the social, productive and cultural life of the region. Among the 200 projects submitted, the jury chose the Studio Monoblock one.

The projecter commented: “… The volumes that make up the museum act as a breakwater rocks facing the sea looking to the city from the distance. The scale of the project is a vision of the city itself, its size, its vitality, and the efforts made to locate it as a city with world-class cultural offerings… ”

The museum was built on the seafront, on a vacant lot with 2ha, on Av Camet U. Felix and Lopez de Gomara, in the city of Mar del Plata, Buenos Aires province, Argentina. 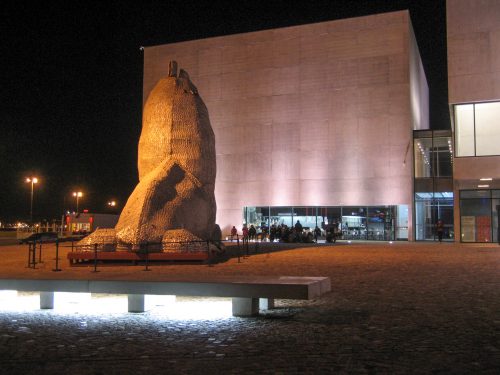 MAR was conceived not only as a museum, but also as a space for cultural diffusion shelter, as well as exhibitions, informative and artistic-social outreach activities intended to reach every bar of the population, access is free, and bring cultural to the inhabitants of the city property, strengthening their belonging to the same community while generating a new point of attraction for the many visitors who come to one of the most traditional tourist cities in the country.

The project proposes an intervention directly on the coast by way of continuity through a public square, emphasizing his perspective as an urban landmark position.

The building comprises four volumes that are accessed through a outdoor plaza on Martha Minujín, Argentine controversial visual artist, has placed the figure of a great Sea Dog, related image the city of Mar del Plata.

Its exterior appearance is angular and forceful, a foretaste of the large open volumes offered inside, but also a reference to the waterfront of the city in which the volume of the museum displays as large rocks facing the ocean, creating a new profile in the northern coastal area of ​​the city.
The museum features exhibition spaces outdoor sculpture courtyard and rooms upstairs. Inside view through all your open to go sit in some cropping from the sea or the city skyline seen spaces. 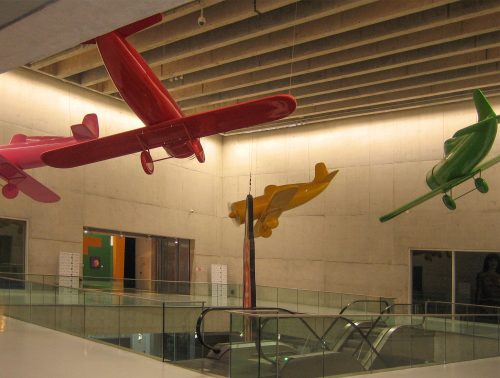 The building has on the ground floor, an auditorium, restoration workshops, preservation area, library, café and shop. Unlike the higher floor, more solid, the street-level floor was thought to pedestrian scale, continuing the sidewalk and the buildings that surrounds it, an open and transparent floor in terms of activities that houses the plant.

The treatment of double height space located in the lobby allows this space to be used as a distributor and as a space to exhibit large works. This floor is accessed by escalators or higher lift.

The 3 large covers rooms on the first level balcony over an open core module that serves as a unifying point. Upper height allowed overhead zenithal lighting during the day and offer a large flexible space as required by the different exhibitions. The spaces are neutral, high, limpid, The spaces are neutral, high, limpid, stage houses with all necessary to show visitors the works of contemporary art, getting with movable planels the surfaces and required forms, always supported by daylight that passing through their decks and long rows of electrical lights. 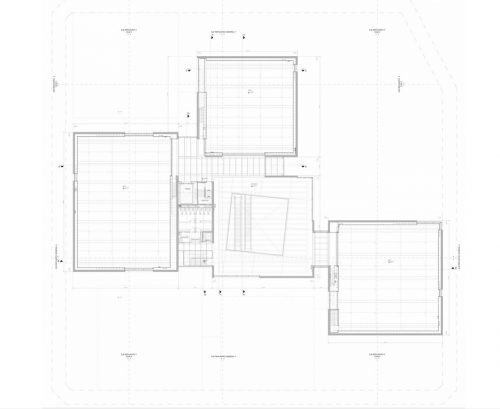 Each of the four volumes that make up the museum is understood as a structurally autonomous part, a structural support that serves as a concrete pipe with a wall 25cm thick together, at 5 meters above ground level, on a waffle slab that serves as a roof to the ground and the galleries floors upstairs. The central part of this slab is free, occupied by one of the modules, this time with a quadrilateral drilling facilitating communication between the two levels by balcony.

Using these independent structural modules allow greater flexibility in the time of construction and that each of them could be completed independently, subtracting pressure those responsible for its implementation and also vary the steps planned to be a building functional open structure. This type of support structure allows few supporting walls, creating large gaps in both downstairs and upstairs.

The interstitial spaces created between the modules generate overhangs and surprising corners that give depth to the rooms and which are used for display, letting the view scroll large lintels of the structure, the system of metal walkways and glazed units communicate with the outside

At the top, at a height of 18.50m, plant cover has south-facing skylights that allow the use of daylight within rooms. 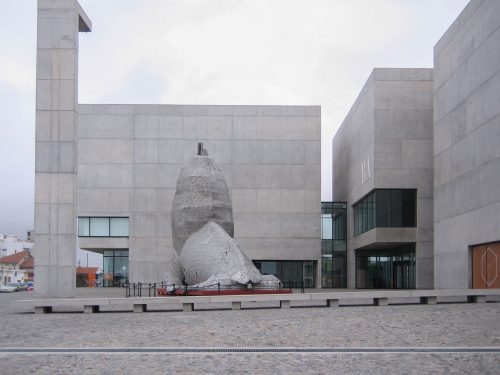 Reinforced concrete is the material that gives shape and force the entire project. Used in the modules that form the building was worked both technically and visually, leaving visible marks left by the formswork on its exterior walls, some interior walls and ceilings. The use of this material, off the coast of the Atlantic Ocean aims to provide a building that does not require major maintenance and care is maintained over time.

The floor of the public square has been made with pavers, stone was used to seats. 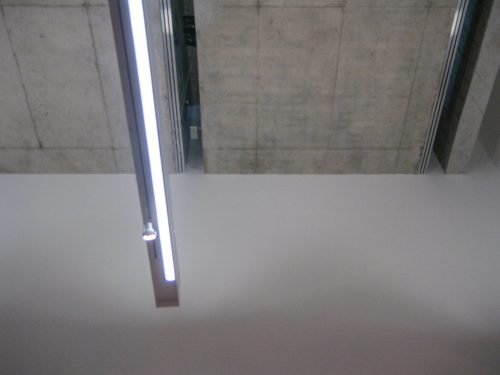 In the exhibition rooms the walls were covered with gypsum plaster painted white, leaving large concrete rafters as reference to the majority of the building materials, the floors were covered with synthetic material in different colors. The glass enclosures were made with sealed double glazing and aluminum frames.

Conditioning installations are independent and autonomous in each volume, on the walls of each of the downspouts, the paths of air conditioning, electrical wiring and thermal insulation are individually resolved.

Except for files and workshops, the ground floor has Fire Sprinklers, and Halon gas in exhibition spaces, with sectored in each of the modules, which can be isolated, if necessary, through gates systems.

The museum offers electronic security systems and can also be used, if necessary, the automatic closing of each of the rooms by doors, an efficient security system built into the architecture.

Sculpture in the public square

The figure of a big Sea Dog is located in the public square that leads to the museum. It is the work of artist Marta Minujín. Its structure was made ​​of iron and expanded metal and then coated with 80,000 wrappers “Havanna alfajores”, a typical sweet of the city. After a time these wrappers will be removed by visitors who can redeem them for one of these “alfajores” at any point of sale of the iconic marplatense company. From that time the structure will be filled with soil and plants for the enjoyment of an ecological museum sculpture.