Bridge over the Basento River

In the immediate postwar period, several talented engineers entered the fray with structural designs and formally managed to be technological innovators. One was the multi-talented Italian engineer Sergio Musmeci, whose best known work, the Viaduct Basento ,1967-1974, is one of the most emblematic eclectic infrastructure of the time.

The Bridge on the River Basento and polymerized concrete space frames are some of the ideas of Sergio Musmeci, minimal structures browser. The theoretical and practical work of Musmeci challenges those who believe that the relationship between mathematics and architecture is only theoretical. Musmeci, was one of the civil and aeronautical engineers more offenders twentieth century.
Along with his contemporaries Frei Otto, Eladio Dieste, and his mentor Luigi Nervi, derived forms of the stresses incurred in different materials and structural systems, usually through extensive studies with large-scale models, reversing the typical design process arbitrary geometry first prescribing specific problems or conditions before they see the issues structural. The final form was the result of optimization, which ensured maximum efficiency in performance and minimal material usage.

The viaduct crosses the river becoming Basento access to the ancient city of Potenza, founded in BC 260. The city has been industrially developed along the river is the capital of the mountainous region of Basilicata, Italy.

The bridge is the main route of communication between industrial area and the residential area of ​​the city, with its design influenced initially by the location of the river and the railroad tracks, across both, plus two roads in the nearby industrial area to the city. The structure withstood the great earthquake in Irpinia in 1980 which reached 6.89Mw on the Richter scale

All research efforts Sergio Musmeci are motivated by the need to produce shapes created by the forces and stress. In a change from the traditional method, the latter is considered known, and the geometric variables are the unknowns that have to be found, ie, the best way for a structure, expressing its maximum efficiency and driving forces through material chosen, constantly changing direction, if necessary. In this project, the architect was implemented in structures that form is not determined by the building but for the representation of loads and their actions in space.

The architectural solution on Basento Bridge (Ponte sul Basento), is the result of thinking Musmeci, who considered that the thought of the engineer and the architect should coincide in the main, the first would have to develop its imaginative aspect and its Once the architect be more technical. With the viaduct Potenza, Musmeci showed the will of tender points between the two disciplines, resulting in a piece of sculpture, architecture, dynamic and changing according to the observation point, equipped with a highly expressive from every point of view.

The unusual 3D shapes are reminiscent of the crest of a rooster poultry or nuns headdress hospital in some of the fantasies of the Italian film director Federico Fellini. 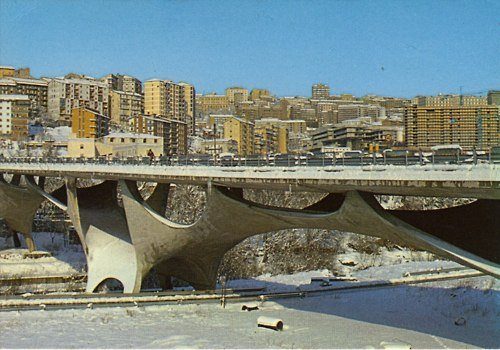 Basento The viaduct consists of a traffic deck, supported on a membrane continuous structural concrete 30 cm thick. And the flat extension of the upper layer of the road is distorted by a “underworld” of complex surfaces, whose curves and responsive to fluid forms an organic style. These cavernous spaces function as a pedestrian walkway.

Composed of four sections of 70 meters, the cover is a thin straight line, a plate with a slight tilt to the city. This thin shell constantly dancing the same movements on the “fingers” that support the deck and rest on the ground. Membrane is a reinforced concrete 30 inches thick, a little more on the edges, designed to emit a uniform tension compression only.

Besides aesthetics, the bridge causes a rethinking of the usual dichotomy between the world above, the road and expanding their horizons, and the bottom, almost always sacrificed for the overpass. In this case, however, is the “low” which is enhanced with the infrastructure, which reiterates the fluid and organic essence water flow and nature. The upper and lower promenade designed by Musmeci on the back of the membrane, where, according to archival photos, he walks happily opens new alternative views among the courts of curved contours of the deck and build a new landscape within and between the structure, such as a covered walkway or a small park. The space between the two structures was conceived by the author to design a pedestrian by which the inhabitants of Potenza could descend from the city to a linear park located along the shores of Basento. However, this ride was not carried out.

“… I’ve always been convinced that a structure can be designed to give through their own form, comprehensive information about their own role and moreover I know no other way to load a structural form of communication with potential… “Sergio Musmeci 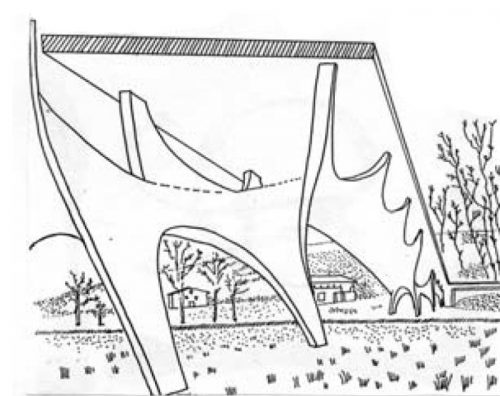 Perspective from the river

The concrete structure is modeled in an alternation of concave and convex shapes that form four arches, light and alternately touching the ground or soil under the driveway, as supported by the tips of the fingers of one hand. Musmeci said his Basento River Bridge was not resolved as an arc, in terms of structural template, but as a vault, or rather as a membrane evenly compressed reinforced concrete with 30 cm thick, excluding the ribs along the edges, which were meant to be used as a walkway for pedestrians, meeting the requirements of the minimum structure, mathematical and technical problem Musmeci subsequently analyzed in his book “The static structures”, (The statica delle strutture)

Developing the bridge is formed by the combination of two superimposed structures, each designed with different criteria.

The upper structure is composed of an inclined platform projected wheeled vehicular traffic. This requirement common to any proposed bridge is performed, completely determines the final shape, other solutions static diverting most suitable from the standpoint of the economy of the material. Bending stresses appearing on the platform produced, as mentioned above, stress concentrations in some areas of the material, with the dispersion of the voltage values ​​indicative of the quality of the structural design. Musmeci The proposed platform rests on a lower structure 32 through specific support. 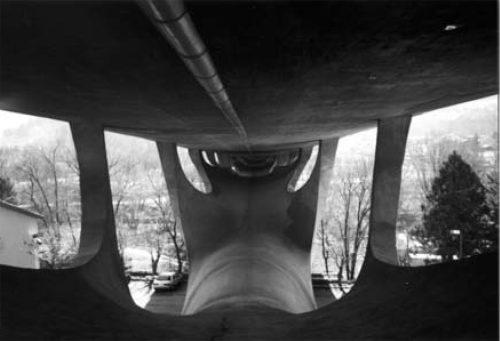 To the bottom of the bridge structure were not architectural constraints determine its general form from the initial phase of the design process. Just as other architects structuralists, such as Antonio Gaudi or Felix Candela, Musmeci used to design this structure certain construction criteria, geometric and structural logic, exploring the world of three dimensions and escaping the formal limitations imposed by the classical systems of representation in the plane. Musmeci ignored inherited structural forms and leaned on the scientific contributions of the present to find that structural form more suited to the specific needs of the model. The result obtained was a surface structure with a static form unconventional, to assess it from an aesthetic point of view, it is essential to have some static sensitivity.

The structure consists of a double-curved surface 30 centimeters thick, which describes in space four equal arcs 69.20 m span supported on bases 10.38 square meters per side, each one of which rests field. There can be decomposed structurally as a single object, this feature makes it particularly resistant against possible differential settlement or seismic vibrations, so common in the mountainous region of Potenza. While the resulting shape was too complicated so it can be decomposed into industrializable repetitive elements and calculation methods used were too complex, the overall cost of the structure was similar to other conventional solutions.

Construction Photos highlight the contrast between the projected concrete forms in situ and the orthogonal design of metal scaffolding “Innocenti-tube” used for mounting.

The strange behavior of the structure was tested in a 1:10 scale model made of micro-concrete reinforced. The rupture was induced by the Institute of Modeling and Experimental Structures of Bergamo, manifesting an excellent performance in the structural form to unexpected actions. The break was reached when the weight and overload increased 100% the original value

The tests for measuring the electrical voltage were performed in a model methacrylate two sections, with a scale of 1:100.
In math, we know that the minimal surfaces are surfaces with a mean curvature of zero, including, but not limited to the surfaces of minimum area subject to various constraints, ie minimizing the surface area. For the bridge Basento minimum area is unique and develops at a length of 280 meters.

“… The shape is determined by contours designed so as to exclude any bending stress. The results of the calculations have been checked with models consisting of blowing soap bubbles and highly stretched rubber and finally verified with static tests on a model of methacrylate and other microcemento model built in Bergamo by ISMES, Experimental Institute for models and Structures, in Bergamo… “(Sergio Musmeci, Pordenone 1979 p. 22).

The resulting forms of calculations performed by Musmeci were too complicated to carry them out in industrialized repetitive modules, but nevertheless did not exceed the final cost to a more conventional long. To reduce overall costs was chosen as a structural concrete, easily molded, the two principal curvatures being equal and opposite, to thus control the geometry and simplify the use of single elements to the shuttering

Concerning the economy of the material, the conditions to be studied have edges of the structure to prevent the occurrence of bending stresses. Thus all parts of the structure would be subject to the same state of tension.