Guided by the ideas developed in the 1950s, Kubitschek wanted the capital city to become a pillar of development in the north-east. Even though he did not find the ideal city, he decided to build nothing less than his original design.

For a work of such dimensions, a national competition was convened, won by two of the best architects of the era: Lucio Costa and Oscar Niemeyer.
The first was one of the most reputable developers in the country and the second is a recognized student of Le Corbusier. Both were also ardent communists.

The Metropolitan Cathedral, or Cathedral of Brasilia, is one of many public buildings designed by architect Oscar Niemeyer, 60th in the Brazilian capital.

The cathedral is located in the capital of the Federal Republic of Brazil. Brasilia, built in a central desert area of a continent and country, remains the youngest capital of South America and a large open-air exhibition of the works of Oscar Niemeyer.

Niemeyer saw a compact and clean concept, a volume occuring with the same purity from any perspective and for times of deep religious expression.

In the air born outside the structure of the earth is a cry of faith and hope, then, the gallery is located in semi-darkness to prepare the faithful to show religious order in the contrast of light and the external effects; the faithful depart from the world and are projected between the cathedral and the infinite spaces.

The Cathedral of Brasilia is 40 meters high and holds up to four thousand people.
The base of the building is circular and about 60 m in diameter. Its glass ceiling, begins at the floor and is supported by 16 curved columns. Its circular structure prevents the existence of a facade.

Its nave is over 70 meters in diameter, so long, despite the circular from the Cathedral. Its interior is decorated with stained glass.

Near the entrance there are four statues known as the Four Evangelists.
Finally, in their designs, techniques and materials Niemeyer and Costa combined modern curved lines and the free use of Brazilian baroque reminiscences.

Niemayer’s communist and political trends had hoped that any future regime would be established in this Brazil. Niemayer’s cathedral was designed so that when Brazil was succumbing to communism, the importance of his temple would not be diminished.

The hyperbolic structure is built of concrete, and it seems that with its glass roof it is raised to the open sky. The structure of the Cathedral of Brasilia was completed on 31 May 1970 and was based on revolved hyperbolas, where the sections are asymmetric. The structure itself is the result of 16 identical columns. These columns, which have a hyperbolic section and weigh 90 tonnes, are pointing both hands to the sky. 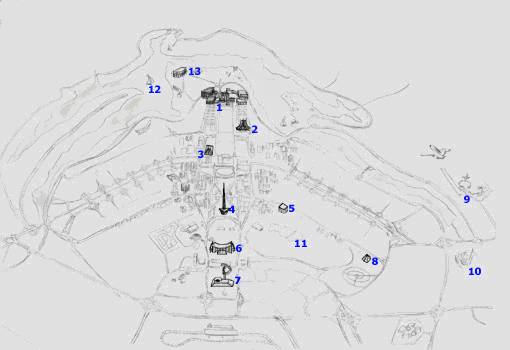 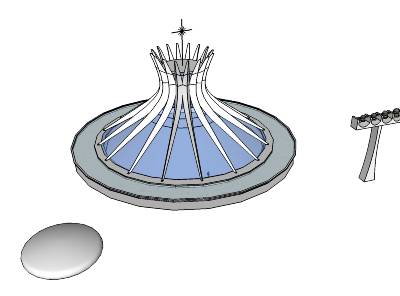 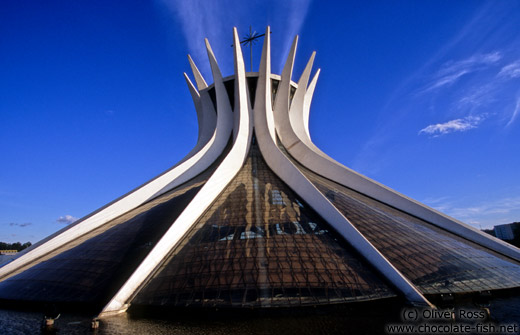 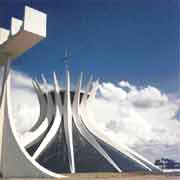 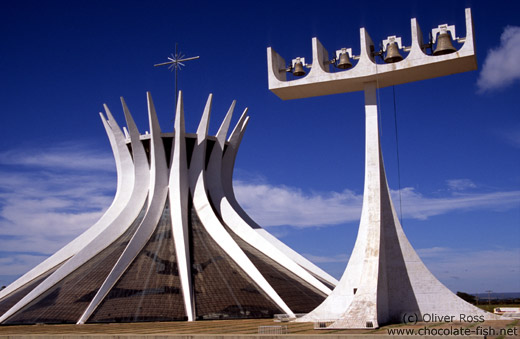 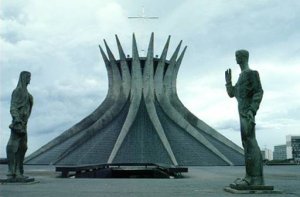 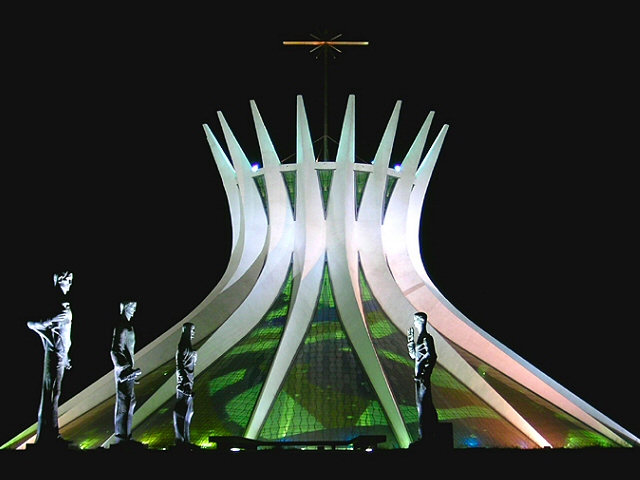 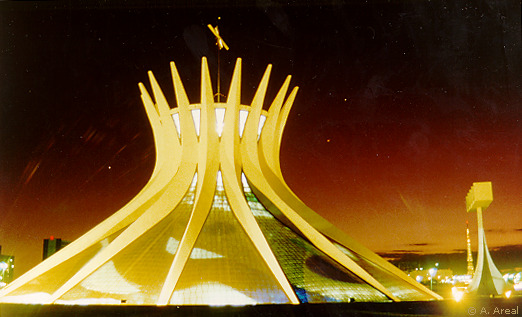 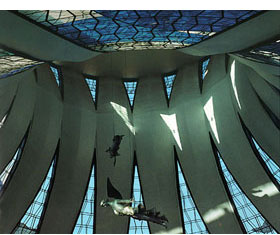 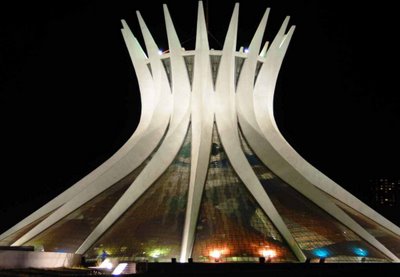 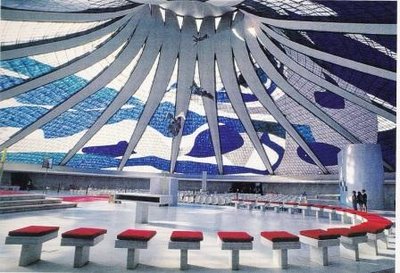 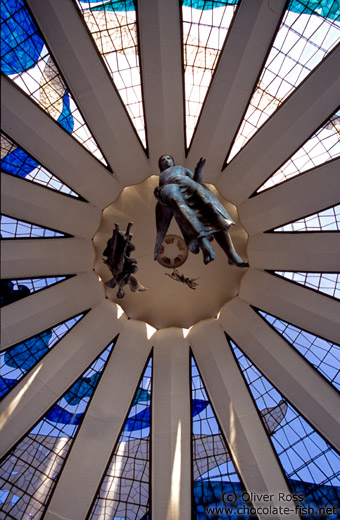 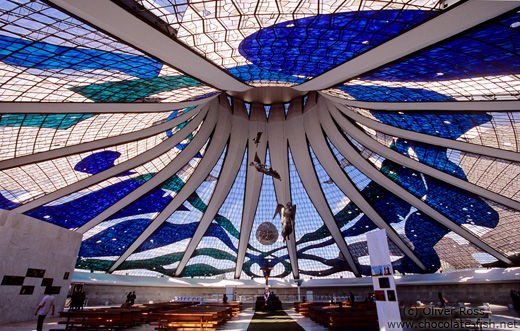 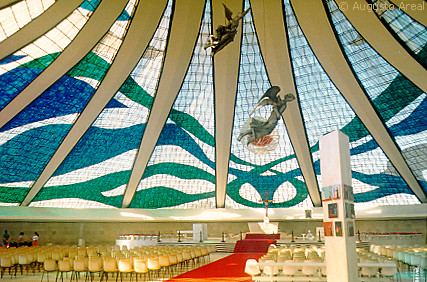 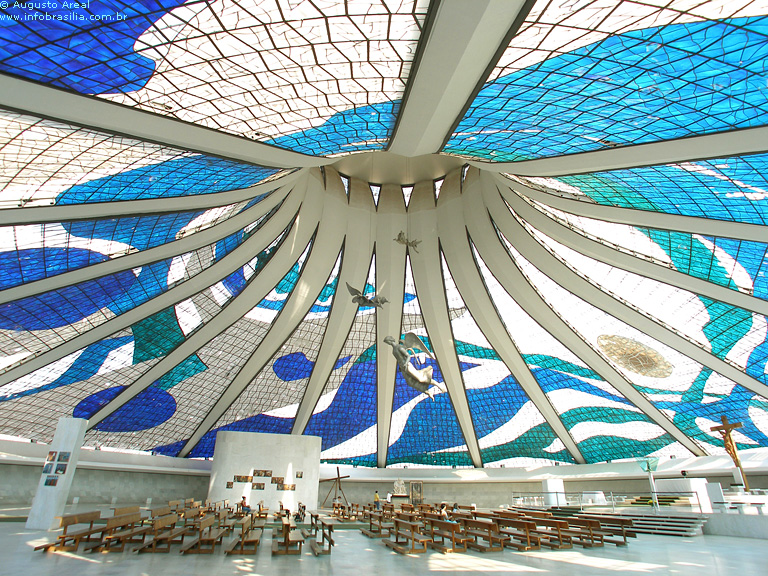