Bozar is a center for art, creativity and design. The institution tries to make art is not something abstract and alien to people, but that is part of culture and society. Here art and visitors interact and enrich each other. The center also seeks a total experience with arts and it uses the surrounding architecture. The arts center allows visitors to discover an artistic environment that immerses you in a complete experience.

The building that houses Bozar is the work of modernist architect Victor Horta. This should be imagined as the first center for the arts in Europe. Must be immense but invisible to look to the city but at the same time were buried, who had many facets but taking unit, prestigious but open to everyone.

The center opened in 1928. The architect Victor Horta (1861-1947), famous for his works of modernist style adopted here’s an Art Deco geometric. Still, the good work of Horta in terms of the quality of light in the interior is maintained in this work, showing that the characteristics of the work of an architect although others remain more decorative aspects change. The same Victor Horta seen in his memoirs this center as a high point of his career.

Victor Horta began to develop the project for the Center for Fine Arts, Bozar, just after the end of World War II. The building was part of the urban development of the Mont des Arts / Kunstberg plan.

The work of Horta is characterized by harmoniously unite architecture, decoration and furniture in a whole. His modernist works were well received, but here had to face several problems. At first the public works minister, Edward Anseele, became interested in the proposal. However, in 1920 the parliament rejected the budget for the project. Finally, in 1922, the Société du Palais des Beaux-Arts got the proposal forward.

The site that the project was awarded irregularly and had an area of ​​8,000 square meters. The authorities put a condition that the space of the main facade of the street was used for shops. Horta strongly opposed to this tax, arguing that this was not his idea of a palace for the fine arts, which never put that name to one of his works that had the facade full of shops.

Moreover, the building must not block the views from the top of the hill was the king of the lower part of the city. So the height of the building so it ended being buried almost entirely confined. 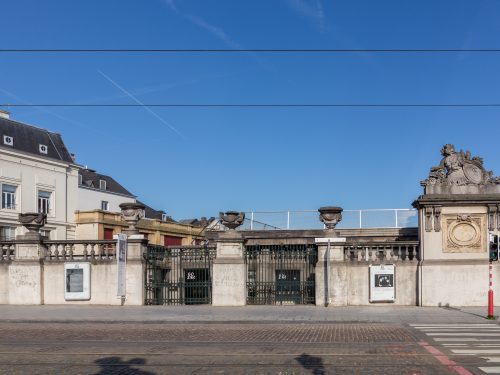 The project had to solve several problems. On the one hand there was the issue of topographic elevation of the city. The building was to unite the upper level to the lower. Besides the architectural space should adapt to the different disciplines that would be welcomed still have unity and consistency in design. It should also serve as a backdrop to the different art forms and give them the best conditions to be exposed. Finally, there was the cultural challenge, art should be accessible to everyone, avoiding elitism but without sacrificing the highest standards of quality.

The center is taking restore jobs in Room Henry Le Boeuf. In addition to return the splendor to this space, restoring windows and floors, it is improving the comfort of the space by installing panels to improve sound insulation and doors to prevent the passage of noise from one space to another.

Bozar is located at 23 Rue Ravenstein, in downtown Brussels, Belgium. At this point the “Ravenstein” entry is located. The center has two entrances, one at 10 Rue Royale | Koningsstraat, the “Park” and the other at number 2 Rue Terarkenstraat, the entry “Terarken” entry. The nearest train station is Gare Centrale, while you can reach metro stops from “Gare Centrale” or “Park” on lines 1 and 5. You can also reach the center and get out at “Bozar” of buses 38 and 71. Right next to the center is the Warandepark Bruxelles park and Paleis Koninklij Palace of Brussels.

Building Horta is like a puzzle that consists of a set in harmony three concert halls, exhibition space and conference rooms. This arrangement of spaces could be carried out thanks to the open floor plan, set up thanks to a skeleton of steel beams and the use of reinforced concrete.

Through building the visitor ascends the hill of Mont des Arts / Kunstberg without even realizing it. The eight-story building containing up an inner journey in which one can get lost if you do not have in mind the reference point of entry.

The building shows three heights on the facade of the street Ravenstein, while on the back, the front of the street Koningsstraat has only ground floor. The condition not to obstruct the view of the city from the highest point makes the most of the space is underground. The program has 4,200 m2 of exhibition space and 33,000 m2 of conference space.

The rooms are characterized by the natural light coming through the glass ceiling. The main concert halls have large halls and distributors. Notable Art Deco details of the Henry Le Boeuf room ceiling and doors. The whole set takes on a much more classic than look Victor Horta adopted in most of his works.

The different spaces can be rented for events and the center can make available to customers with a catering service.

The structure is made of steel and concrete. The facade is made of stone while the materials used for the interior finishes are marble, wood, different types of stone flooring, glass and floors.